When I first got interested in Hamilton watches I was a little intimidated by the magnitude of possible models out there.  Part of the fun of collecting is to have a complete collection and you'd have to collect thousands of watches if you wanted a version of every model, in every configuration that was made.  Just think about the models with white or black dials, it yellow gold and white gold, and the list becomes staggering.

So my interests quickly moved to specific lines of models.  For example, I thought briefly about focusing on Electrics - as there are some really cool and interesting models in the 1957 through 1969 time frame.  However, I quickly realized that Electrics are very costly to maintain, and will eventually be impossible to keep running as consumable parts are eventually depleted.

Mechanical models, if regularly cleaned and oiled, can last well beyond any one person's lifetime.  So then I decided to focus on particular line of mechanical models - the CLD line to be specific.  CLD is meant to be pronounced "sealed" and these unique models preceded what would eventually become "water proof" models.  There aren't that many CLD models so I thought that would be an achievable objective.  Then I realized there are a couple of unicorns in the CLD lineup - watches you may have heard of but few have ever seen.

I sold my meager CLD collection and moved on to greener pastures - the Stormking line.  There are fewer unique Stormking models than there are CLD models so surely that would be achievable - right?  Well, not really, there are a few unicorns in the Stormking world too but I'm getting there.  One of them is the 1960 Stormking VI.  It was produced through 1964. 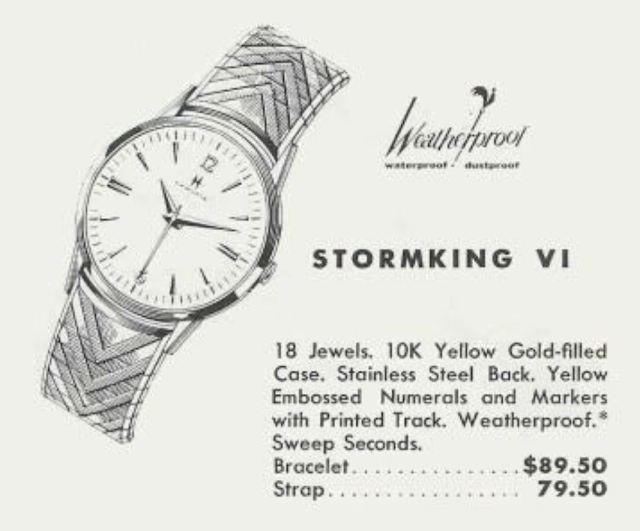 If you look closely at the 1960 catalog depiction, you'll see the model has an 18 jewel movement.  The implies it has an 8/0 735 movement, as there were no other 18 jewel calibers at the time.  The white dial has yellow embossed makers and numerals.  Notice the minute track features lines.

In 1964 the dial changed slightly.  Can you spot the difference?

Instead of lines for the minute marks, there was now a ring of pearled track of gold dots.  The shape of the numbers changed slightly too.  The bracelet stayed the same though.  One funny, or odd, thing that my eye sees is the length of the minute hand seems a bit exaggerated.  Catalog depictions are artistic renditions though, so sometimes they don't match reality.

My Stormking VI project watch is a 1964 version.  In fact, it's a 1968 version and was probably produced by the awards division, based on the presentation on the back.  The awards division provided Hamilton watches to corporate groups or organizations to use as awards or presentations.  In order to ensure that recipients' could not find their award in their local jewelry store, the awards division would use discontinued models or slightly different dial variations.  They would also often put "masterpiece" on the dial. 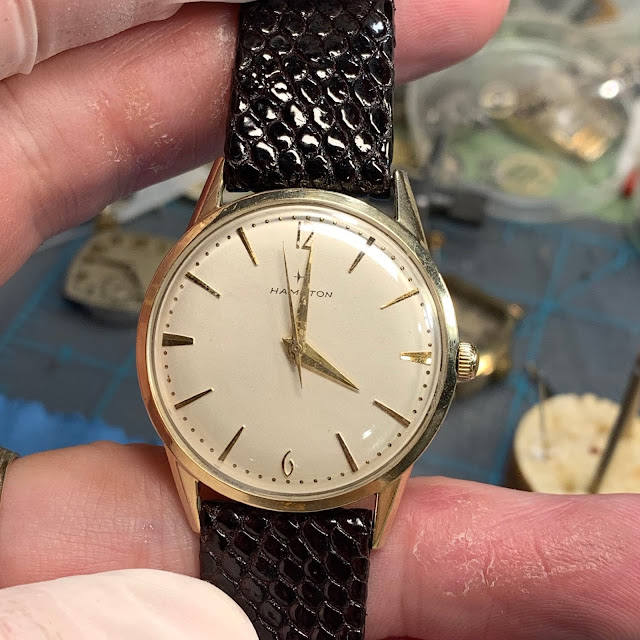 My project watch is a totally legit Stormking VI, it was just produced after 1964 based on the presentation on the case back. 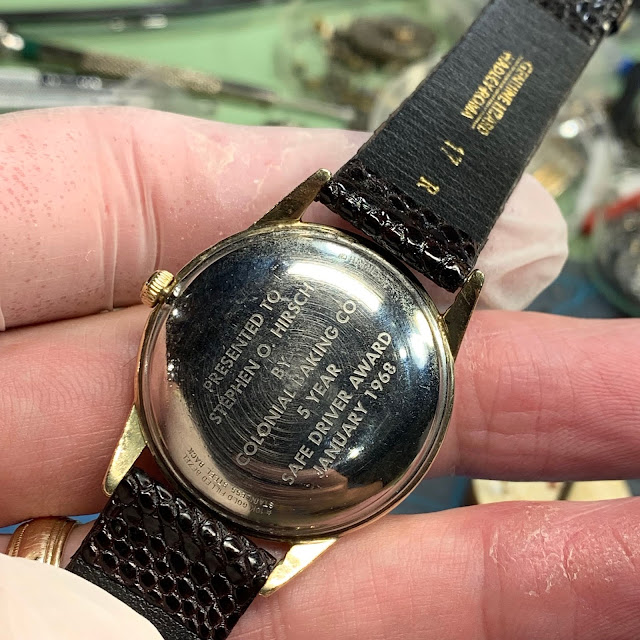 I know I'm not the first one to wonder how this case comes apart... does the stainless steel back pop off?  Someone's tried to pry at it in the past. 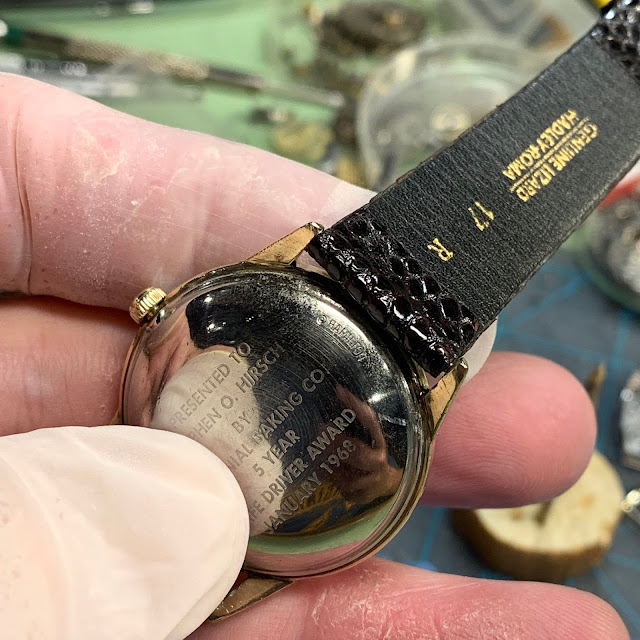 Actually this model opens through the crystal.  Once you lift the crystal you can separate the two-piece stem and lift the movement out the front. 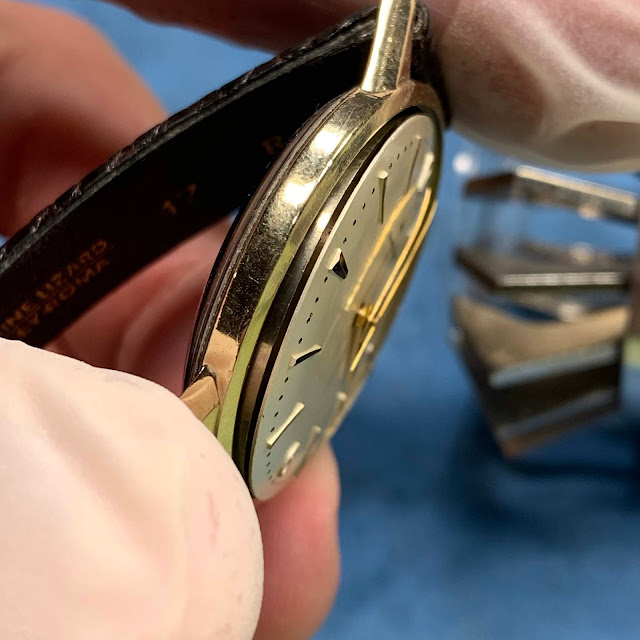 I see one previous watchmaker's mark inside so this watch has been cleaned at least once in the past 50 years.  It's probably long overdue. 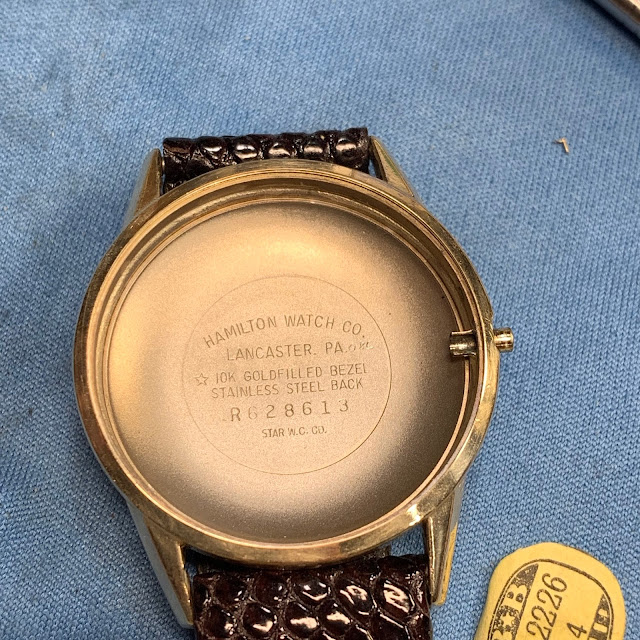 This watch definitely had a bracelet installed at some point.  The inside of the lugs clearly shows some bracelet-related wear. 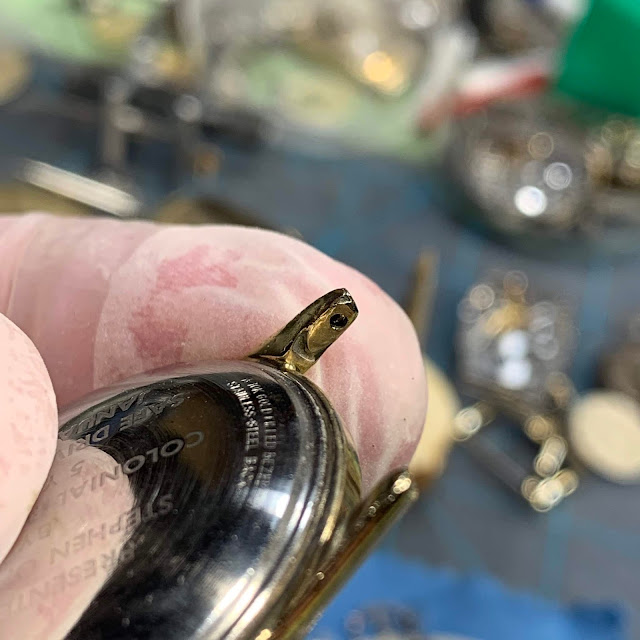 The 735 movement was updated with a Glucydur balance in the early 1960's and renumbered as the 736.  For all intents and purposes everything else is the same between the grades but a Gludydur balance has no timings screws.  If you break this balance staff you'll need to replaced the balance assembly. 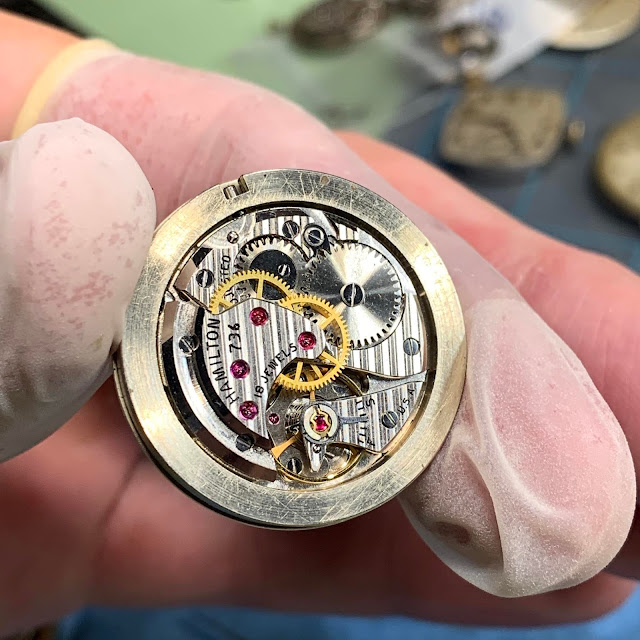 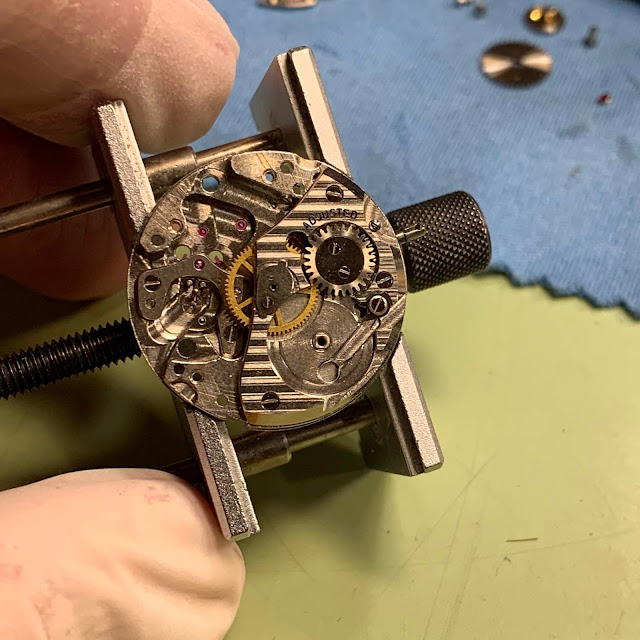 Everything is cleaned and dried.  The crystal was in decent shape so I just polished it so I can reuse it again. 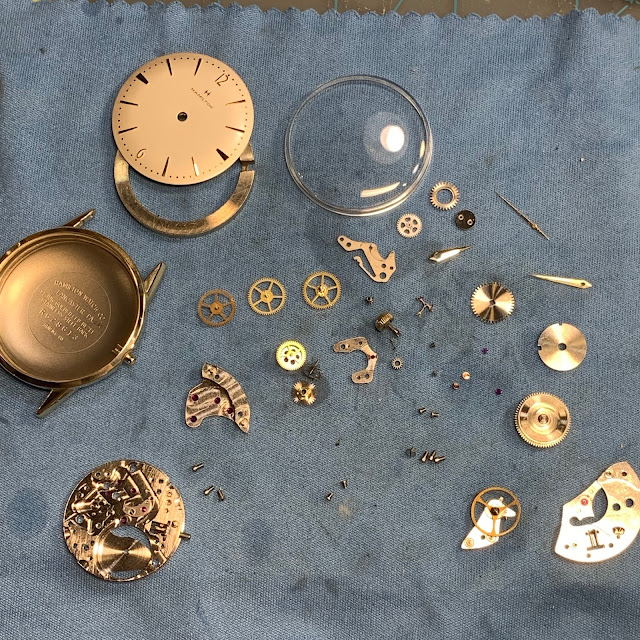 Reassembling one of these 8/0 sized sweep second movements is not easy.  In my early days I would have beads of sweat on my forehead as I fidgeted and fussed with the train wheels for 30+ minutes trying to get everything aligned.  I've had more than a few people ask if they could send me their "parts" in the hopes I could reassemble their watch for them (and no, I don't like to do that, you broke it, you fix it).

This movement is now ticking away with good motion.  Let's see what the timer thinks of it. 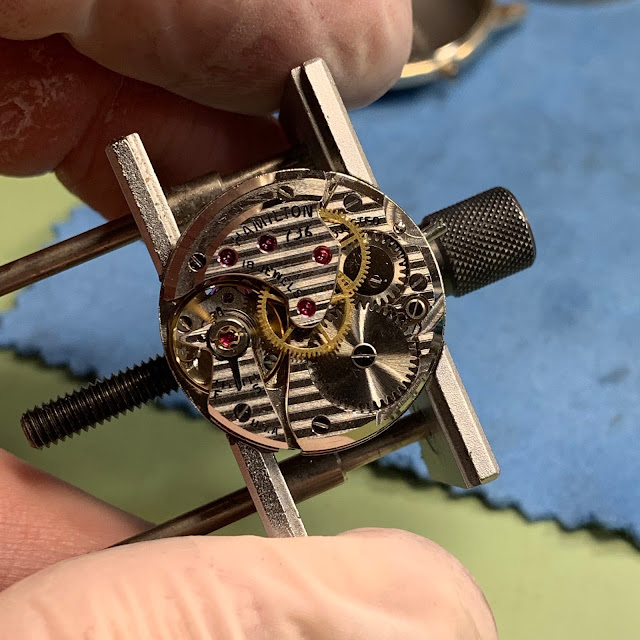 Not too shabby.  Hamilton movements are excellent but if I had one criticism it would be the beat error is challenging to adjust on Lancaster-made movements.  By this time, pretty much all of the Swiss-made calibers had easy adjusting balance cock designs that allowed the beat error to be fine tuned without difficulty.  The case below, the beat error of 1.7ms is well within my specs of being under 3.0 so I will leave it as is.  It could be lowered but that also rolls the dice and risks goofing up the hairspring.  The added juice isn't worth the squeeze when it comes to making this very minor adjustment. 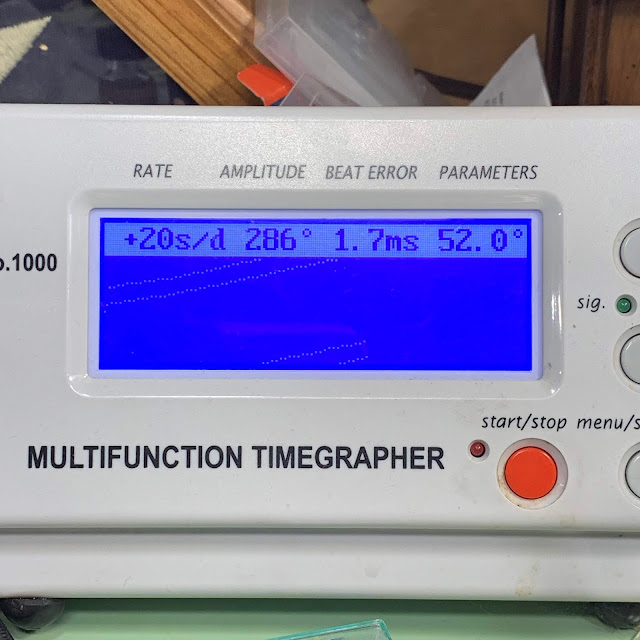 My finished project watch looks pretty much the same as what I started with but now I know the movement is ready for wrist wear.  You can see the proportions of the hands look correct, compared to the catalog depiction for 1964.  They look just as the 1960 catalog depicts though. 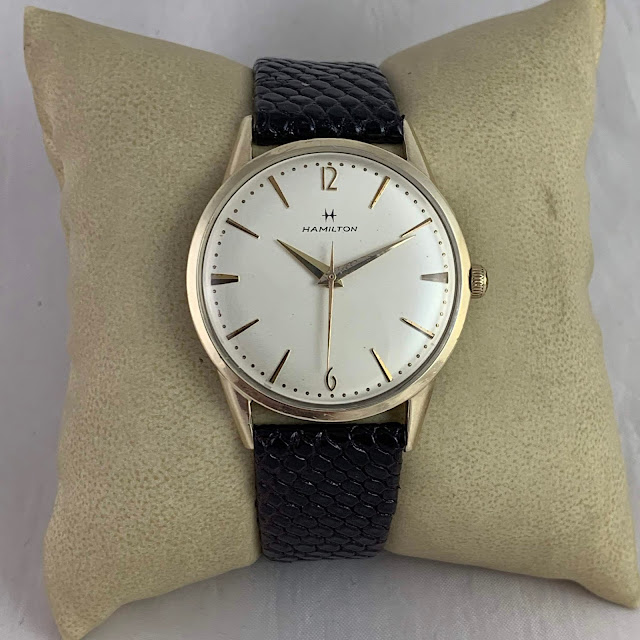 Just for comparison, here's and example of the earlier Stormking VI.  Notice the differences on the dial? 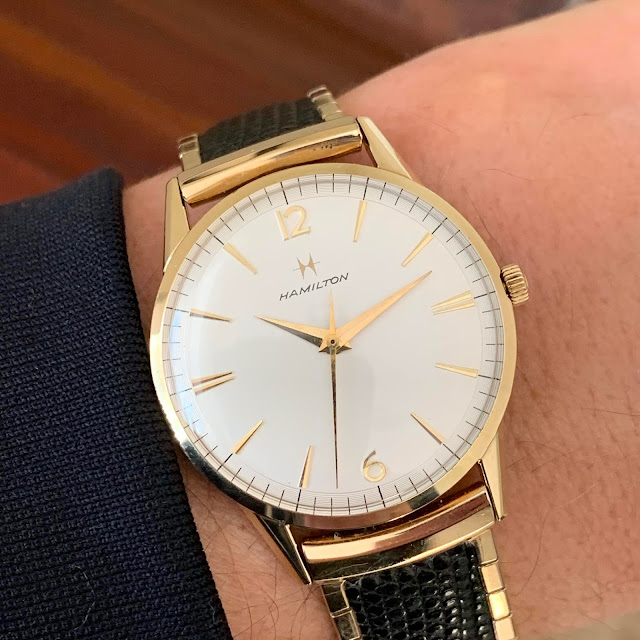