If you see a manual-winding Hamilton watch with a 10K RGP case you stand a good chance of guessing it's a "Sea Something".  There are a bunch of models, starting in 1957, with "sea" in its name and the trend continued well into the 1970s with 10 or more models per year named sea-something.

One of the models you don't see very often is the 1962 Sea Scape II.  It was offered for only two years.  The dial looks very similar to a few other models but the sweep second hand is a unique feature.  For example, this watch looks a lot like a 1960 First Mate.

The Sea Scape II came with a white dial or with a grey dial.  Tucked behind the dial is a 17 jewel Swiss-made 678 movement made by ETA.
I've had my project watch waiting it's turn in a long queue of other projects but it's number finally came up for a trip to the spa.  My example has the grey dial and this is the only example of this watch I have seen. 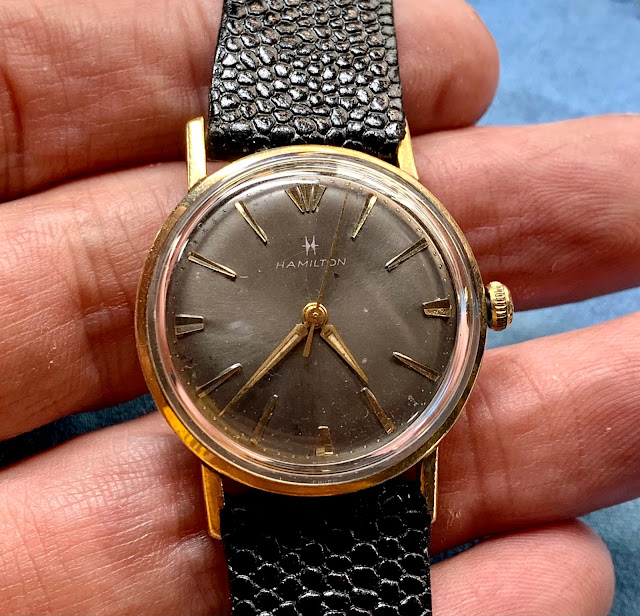 Somewhere in it's past life a new crystal was installed and it was a terrible choice.  It's thicker than the actual watch.  Maybe they wanted to make sure the sweep second hand would clear?  It has room for six or seven other hands too! 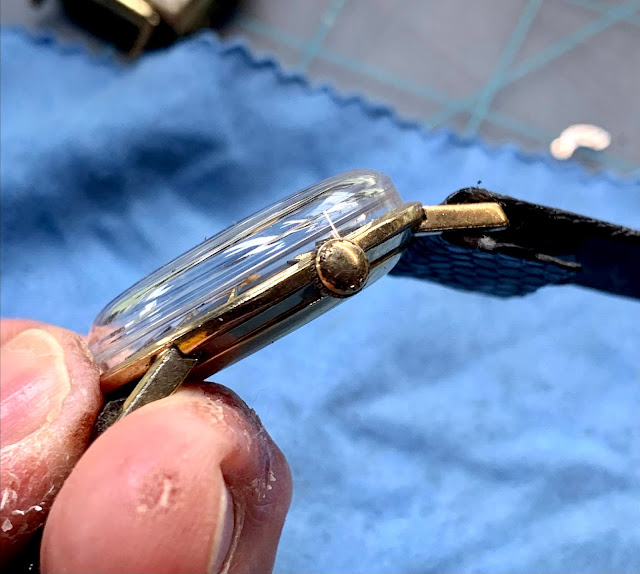 If you are unfamiliar with the 678 you are not alone.  I believe this is the first time I've come across this caliber.  I think it was quickly replaced by the 688, which it looks very much like.  The main difference, to my eye, is the 678 has a fixed hairspring stud on the balance cock. 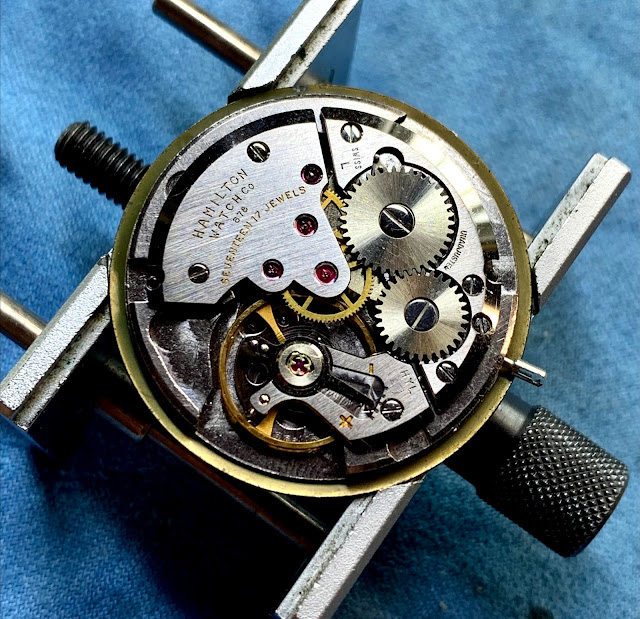 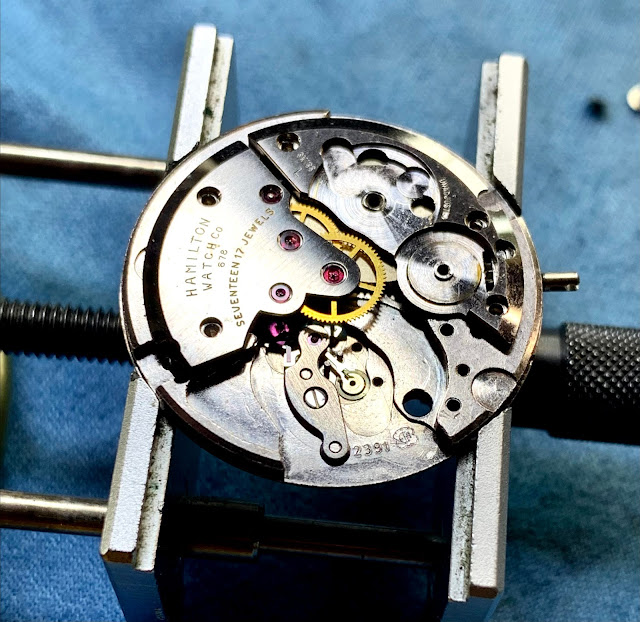 The case is properly marked with Hamilton Watch Co. and was made by Queens.  You don't see Queens very often in Hamilton watches but there are a few. 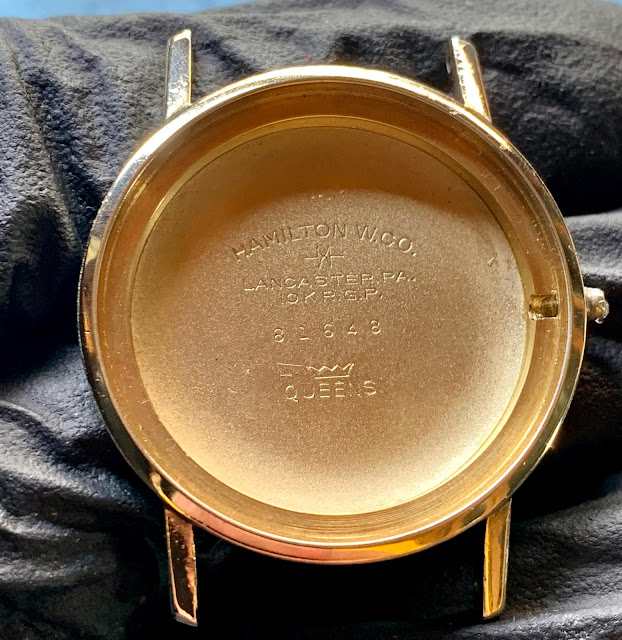 The movement gets completely stripped and thoroughly cleaned before being reassembled with fresh lubricants. 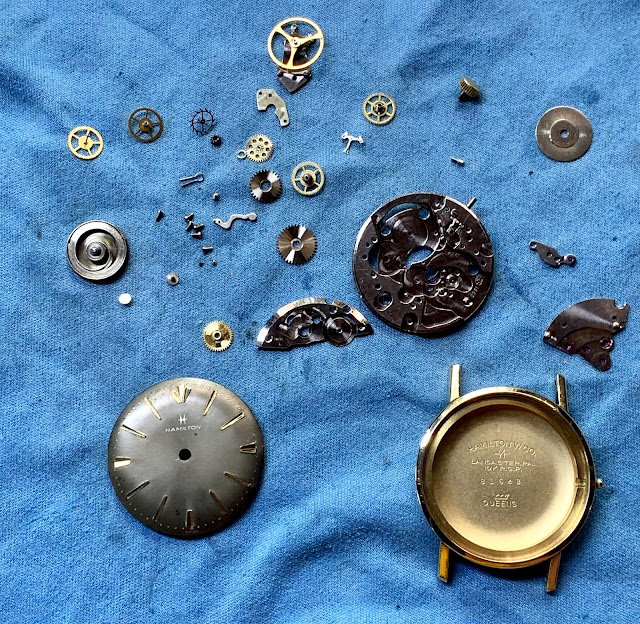 The movement is back together and running with a nice motion.  Now to see what the timer thinks of it. 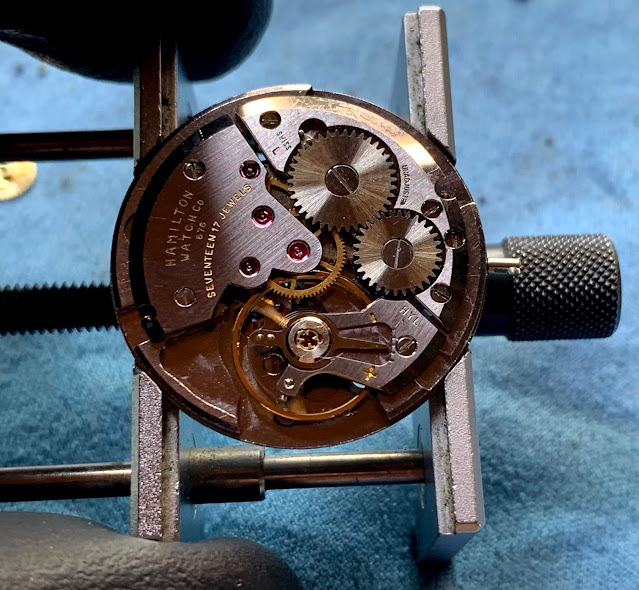 It took a slight tweak or two to get the beat rate inline but everything looks great now. 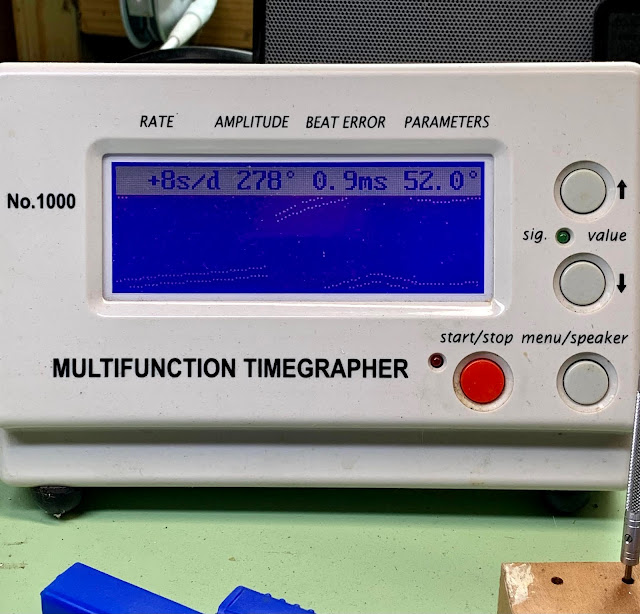 A proper crystal will be a nice improvement to the watch.  I usually use GS PHD crystals for round watches with sweep second hands as long as a reflector ring isn't called for. 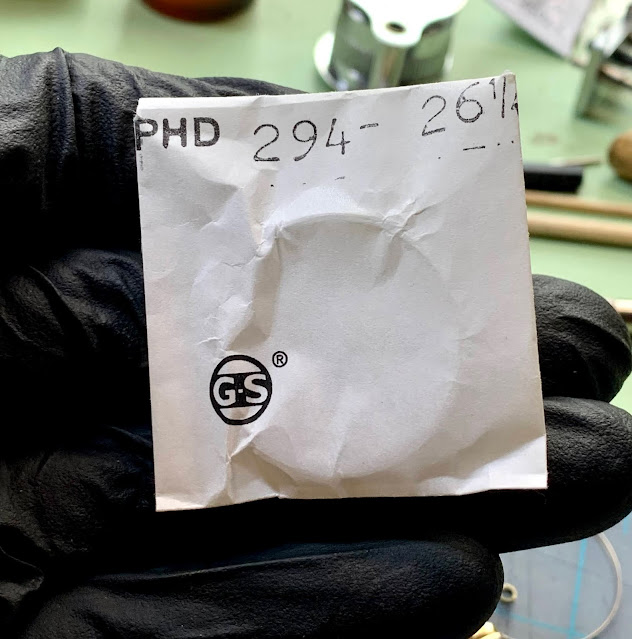 The new crystal looks much more appropriate.  I added a nicer crown as well. 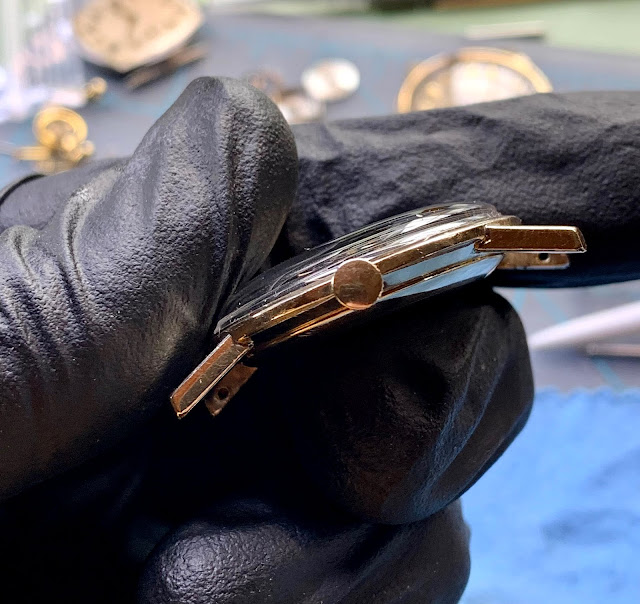 The completed watch looks great.  I relumed the hands as well.  There is a little toning on the dial from the radium previously on the hands.  If the hands stay in the same spot for years and years, they can burn the dial.  The radium is gone now so there's no longer a concern.  The dial has a few spots here and there but most people do too once they reach 60 years old. 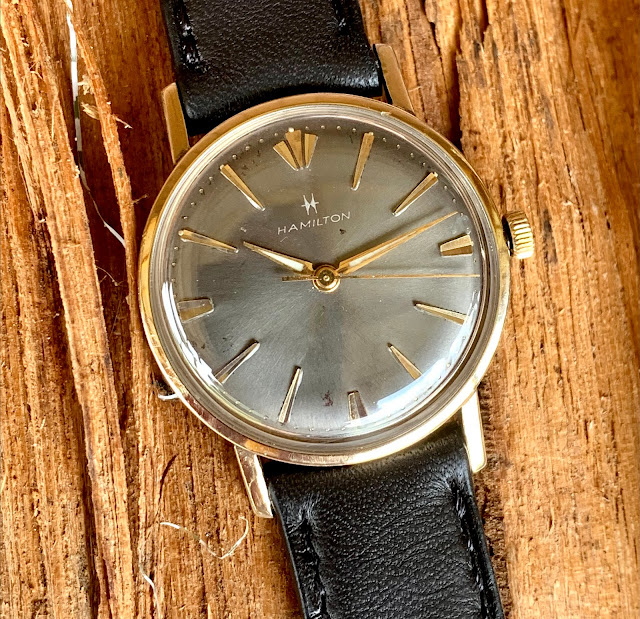 The Sea Scape II is a nice watch but it's a bit of a sleeper ... it looks like any other garden variety model.  However, it actually is a pretty unique model with a rare Hamilton caliber tucked inside.  This is the only Hamilton model I've come across with a 678.

Posted by HandyDan at 1:38 PM No comments:

It has been hot-hot-hot in Virginia.  My new workshop may have a window but it's not air conditioned.  So it's been a while since I've had a good opportunity to work on a watch or two.

Today was a very nice day and I had some time off so I was able to get to a new project for the blog.  It's a 1964 Dateline A-577.  The A stands for Accumatic.  It's a little surprising after 15 years of collecting Hamiltons this is the firs Dateline A-577 that I've come across.  This model was introduced in 1964 and made through 1972.  So you'd think it would be pretty common. 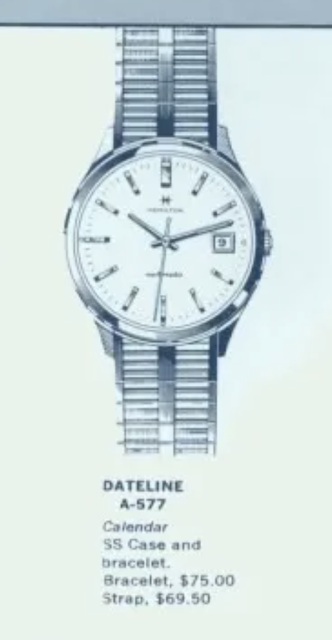 Eight years later, the price of the Dateline A-577 increased from $75 on a bracelet to $79.95.  Inflation adjusted, that's about $515 in today's dollars.  That's actually not too far off from what a modern Hamilton Khaki Automatic might sell for today. 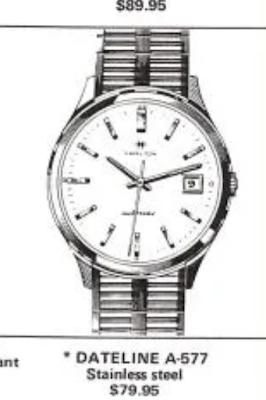 My project watch arrived in pretty nice shape.  The crystal is a bit beat up but stainless steel cases usually hold up very well. 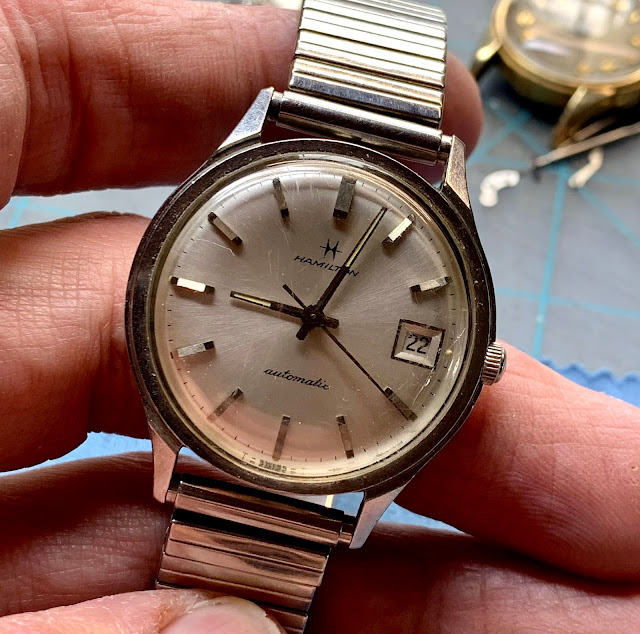 Looking at the case back, it's clear this is a one piece case and the watch opens through the crystal. 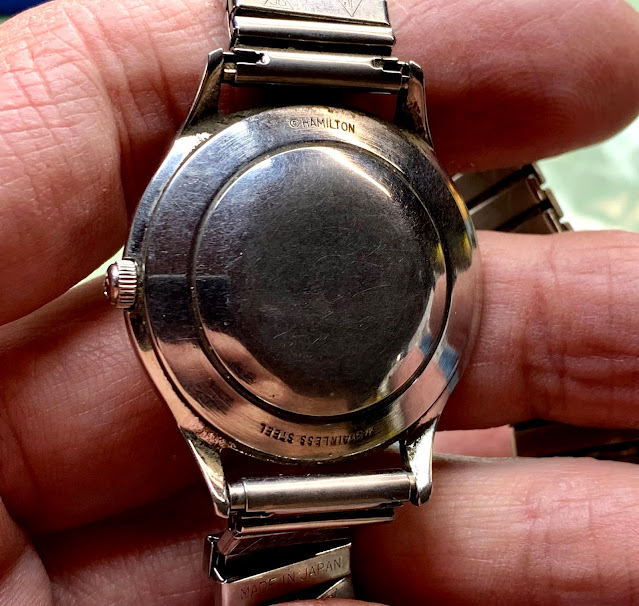 I'll try to polish the crystal but once they are this scratched up it's hard to polish them to be clear again. 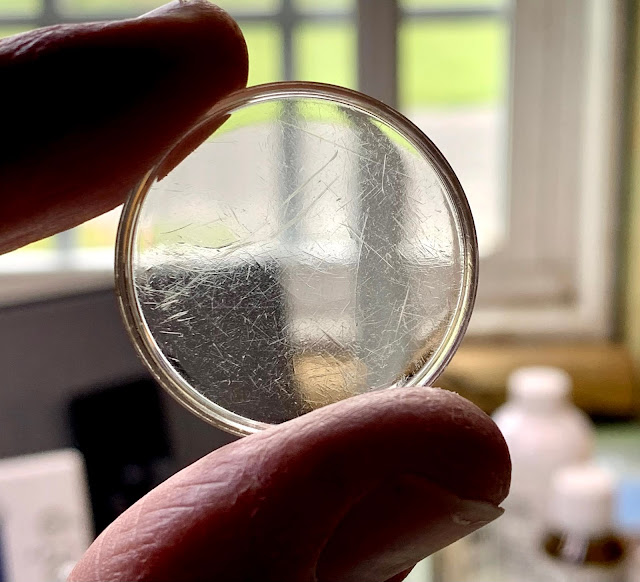 All of the Dateline A-models have a 17 jewel 694 or 694A movement, unless they have a caliber 64 inside which is the same thing but has 4 additional jewels in the automatic framework. 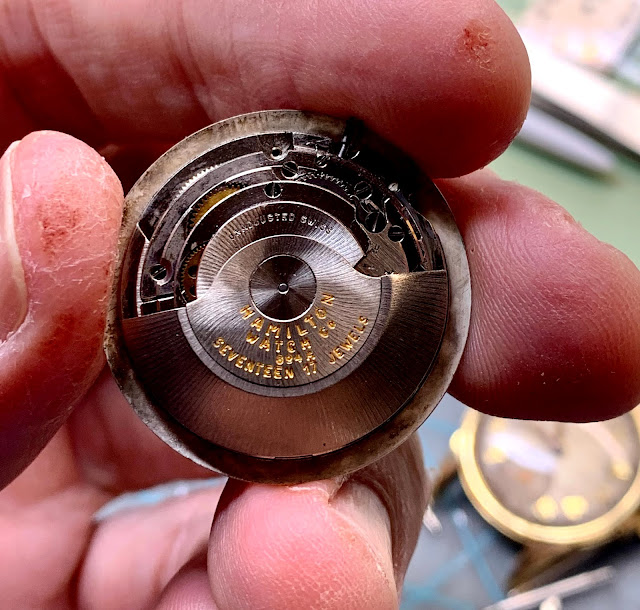 Looking at the inside of the case, it's clear from the other watchmakers' marks that I'm not the first to peek inside this watch.   There are two numbers inside.  The one with the P is the serial number unique to this case.  The other number ends in 64 and that implies this model was introduced it that year. 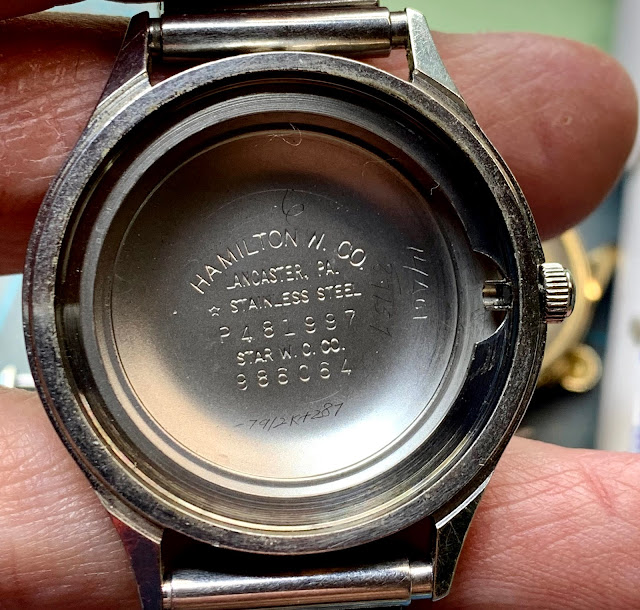 Once the dial and hands are removed you can see the various parts that drive the date complication.  There's a small spring under the cover on the left side by the 7 that you need to be very careful with - or it will disappear, never to be seen again.  Ask me how I know... haha. 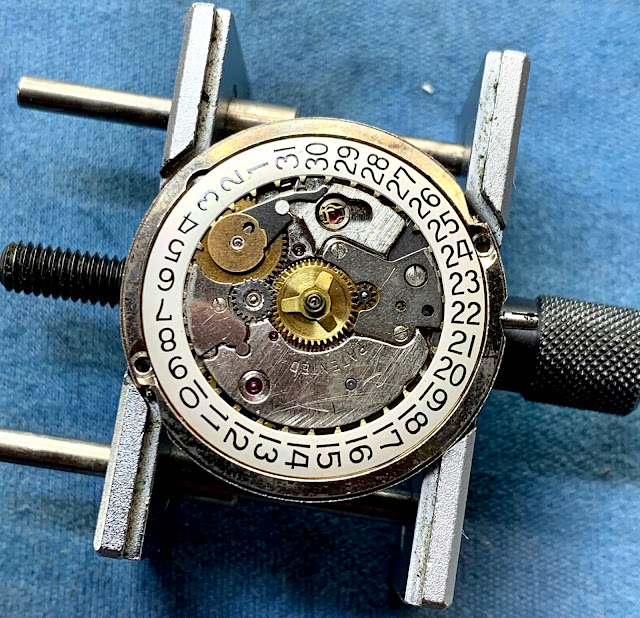 The movement gets completely taken apart and cleaned.  That little spring I mentioned is the U-shaped part at the top of the picture.  When it's time to put that part back in place I will drape a clear plastic drop cloth over my head so if it flies off, it will be confined to the area under the cloth. 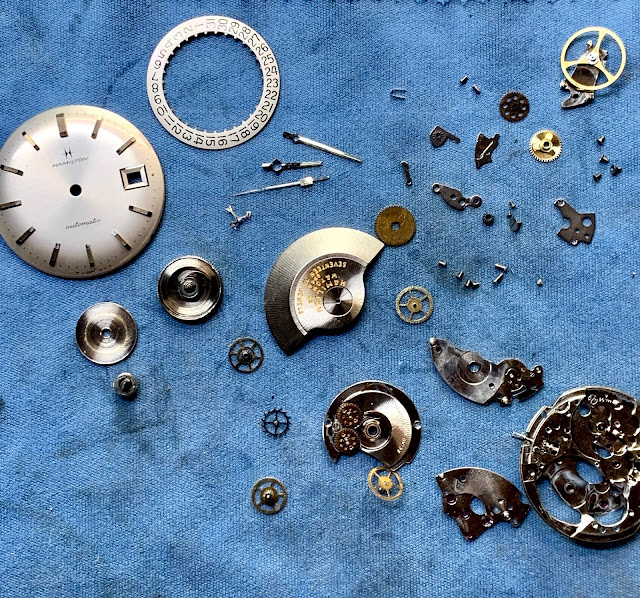 The partially reassembled movement is back to running order.

Looking at the timer, it's not running too poorly.  This movement is so easy to adjust though that I can dial it in even better. 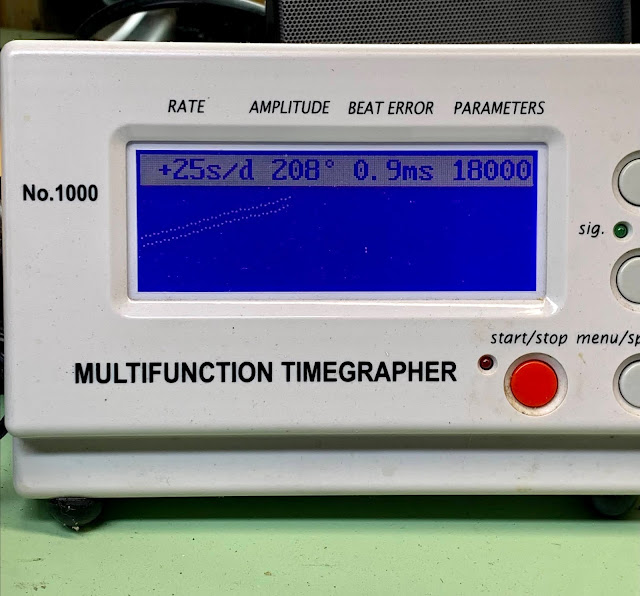 There...  the beat error is essentially zero, it's running a smidgen fast but it will settle down.  The amplitude is a little low but it's not fully wound yet. 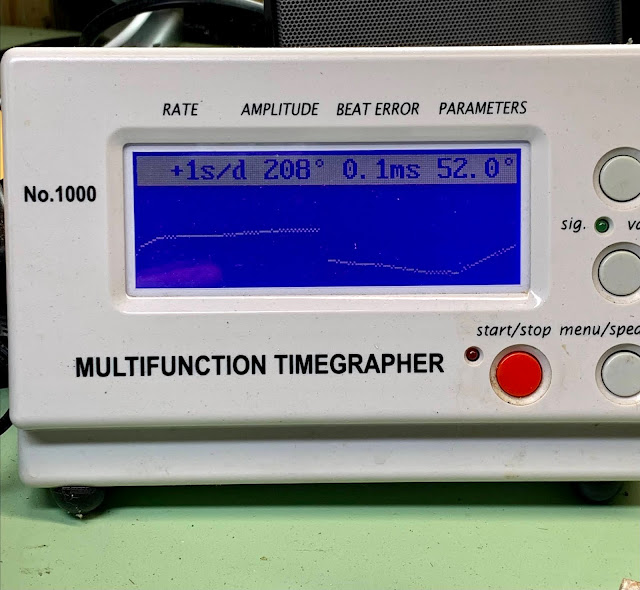 My finished photo looks almost the same as my starting photo - except the crystal is perfect (I replaced it).  I polished the case a little too.  So this watch is now ready for another 50 years of use and enjoyment. 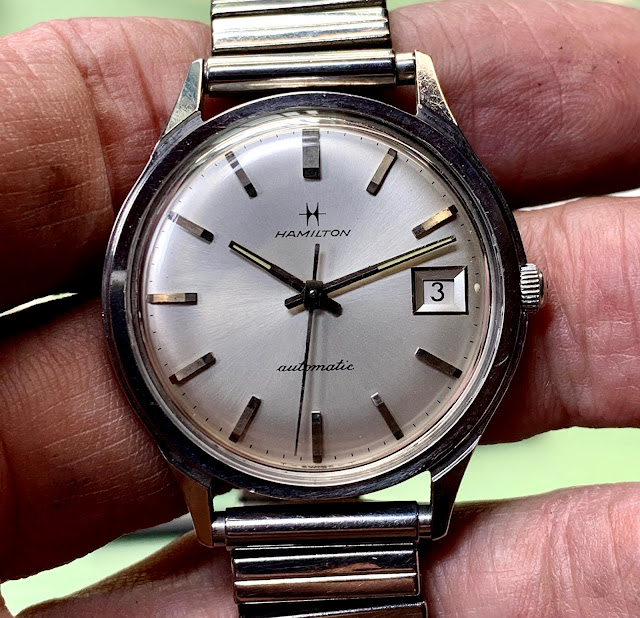