The Hamilton Watch Company got its start in 1892.  Pocket watches was its mission and especially watches certified to be used on railroads.  Overtime they would become the makes of "The Watch of Railroad Accuracy".  There is a surprising array of different models and many of the early examples are quite rare, after all, it was a new company and building a volume of inventory would take time.
Fast forward to 1901... nine short years later.  William McKinley was President of the United States until he was assassinated, and at 42, Teddy Roosevelt took over to became the youngest President in US history.
My project today was made at the same time and is a 21 jewel 18 size Hamilton 940 Railroad Watch.  The 940 is a great movement but it was really the entry level for railroad use.  There were several other higher quality movements made at that time. 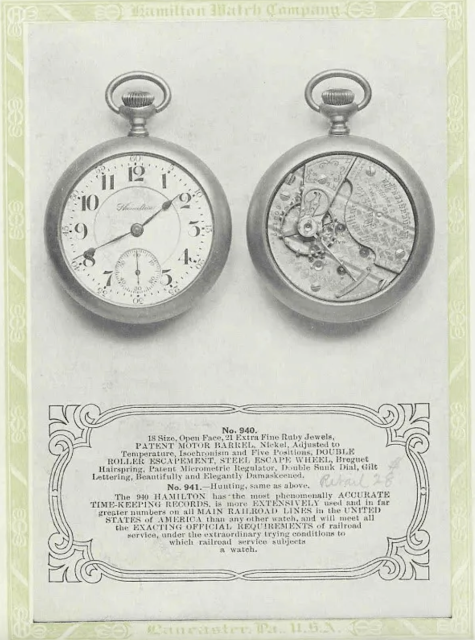 A number of attributes separated the various calibers... number of adjustments, materials of construction, quality of nickel plating, you name it.  Some of the higher end calibers are too beautiful to hide behind a solid case.

The 940 is no slouch though and any Hamilton collector worth his salt probably should have a 940 in their collection - they are great timekeepers and fairly easy to find.

My project watch is well worn.  The case was warranted for 25 years which is a very heavy gold fill.  1901 pre-dates the jewelry standards of solid gold, gold fill, gold plate, etc. and instead cases were warranted against wear through for a period of time.  A 10 year case has less gold than a 20 year case, and that has less than a 25 year case.  A solid gold case might even say "permanent", as it would never wear through to a brass base.

My project watch case is very worn through - so this watch has a LOT of miles on it.  It arrived missing it's crystal.  Fortunately the hands are still present.  The enamel dial is a form of porcelain and it's not unusual for the enamel to show some cracks, especially near the dial feet locations.  This one doesn't look too bad... it's way better than I'll look when I reach 121 years old. 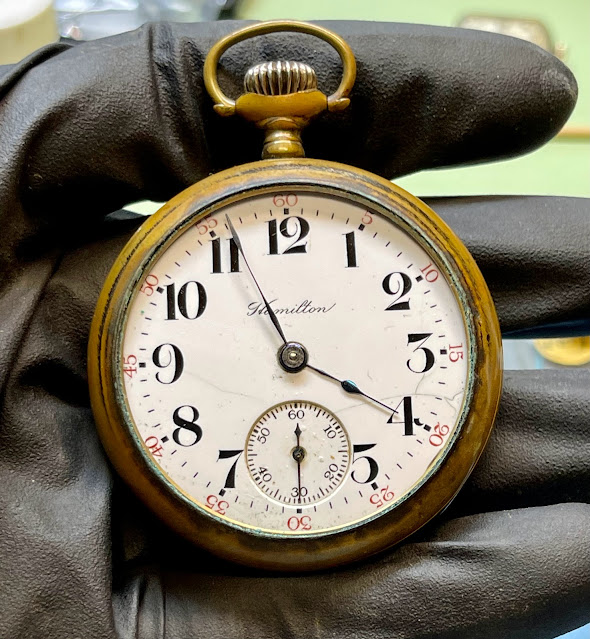 The case back is mostly brass... I think I can make out some sort of engraving but it has been lost to time.  The back and bezel thread on but they don't close all the way - hopefully that's just dirt and not a result of cross threading.  We'll see after it's all cleaned. 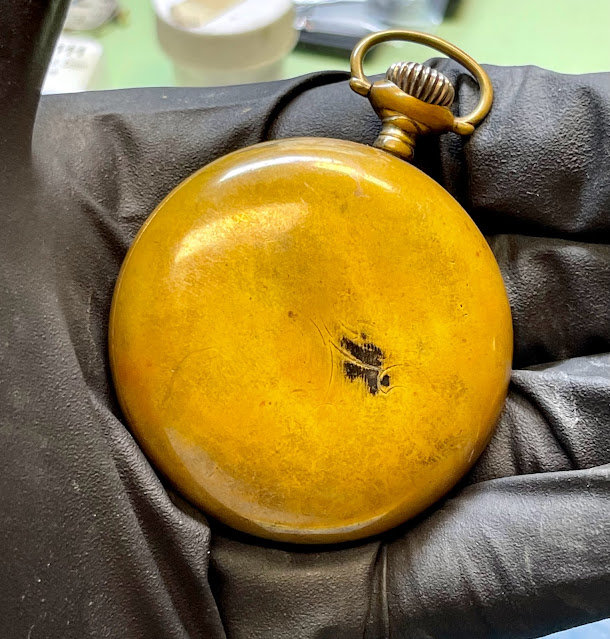 The movement tucked within is in nice shape.  It's nicely damascened.  Notice there is no caliber movement on the back.  It would be a few more years before Hamilton would add the caliber numbers to the engravings.  Based on the serial number this is a 940 movement. 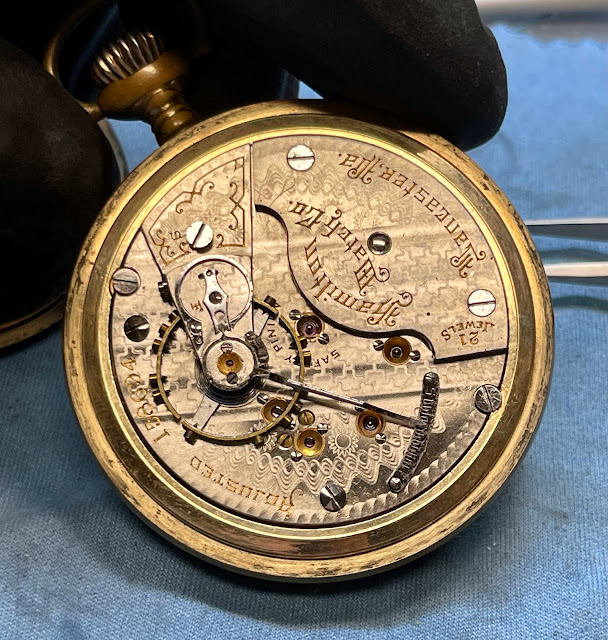 With the dial and hands out of the way, you can see the workings of the lever action.  This is a lever set movement, meaning you have to slide the lever out to engage the parts needed to set the time.  With the lever pushed in, as shown, the watch is in the winding mode.  This way the watch can't accidentally pop into time setting mode - that was a railroad requirement. 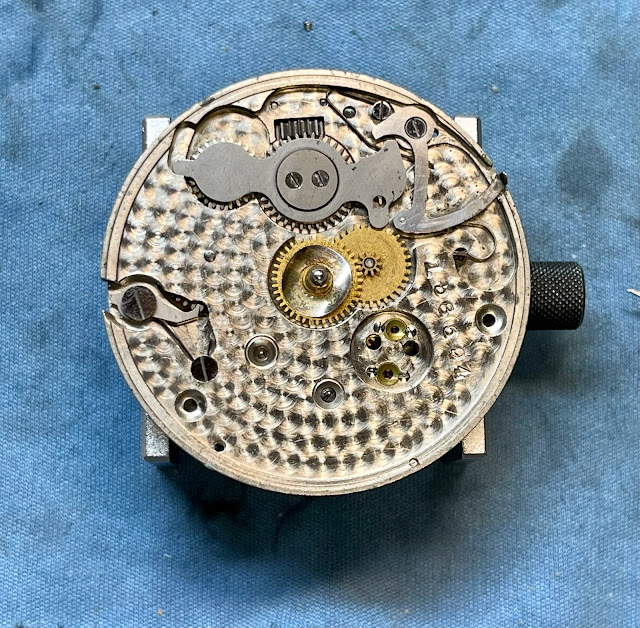 With the barrel and train bridges removed, you can see the four wheels and pallet fork in their respective positions.  It's good to take a photo like this to remember which wheels go back in first. 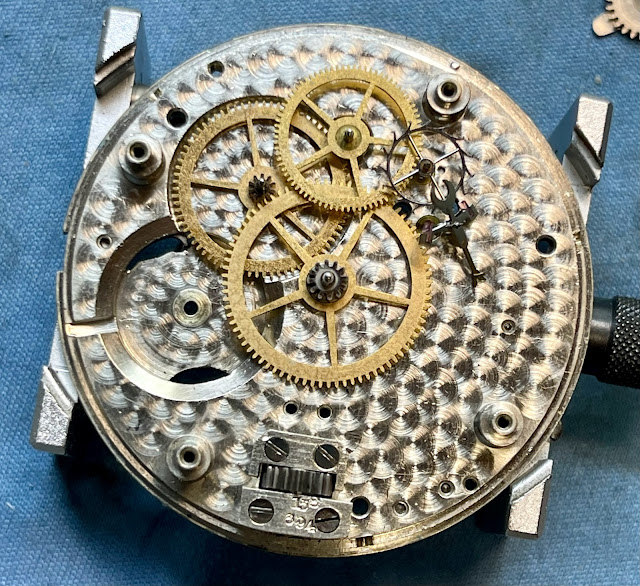 Everything gets cleaned and dried.  The watch already has a white alloy spring inside so no need to change it.  Now it's time to put it back together with fresh oil in all the pivots. 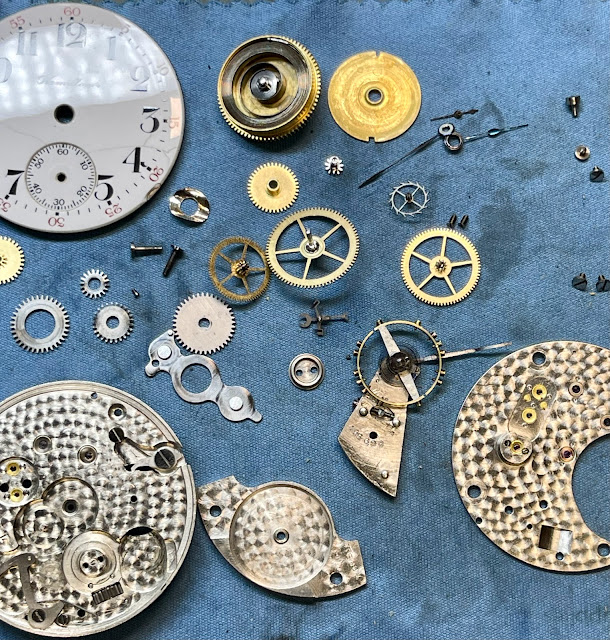 The reassembled movement is noticeably brighter and shinier now.  It's ticking away with good motion.  Time to see what the timer thinks of it. 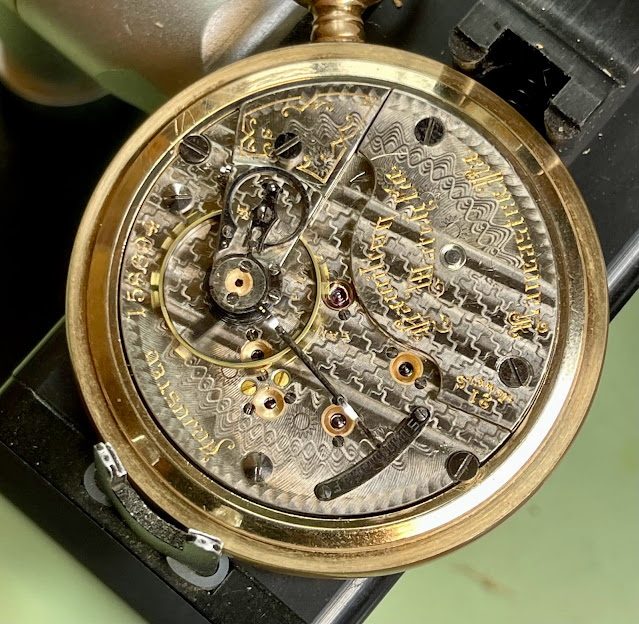 Originally when I saw the two lines so close together I thought, "Yes!  This is looking good." but then I saw the beat error of 9.0ms and realized the lines are actually really so far apart they are approaching each other from the wrong side. 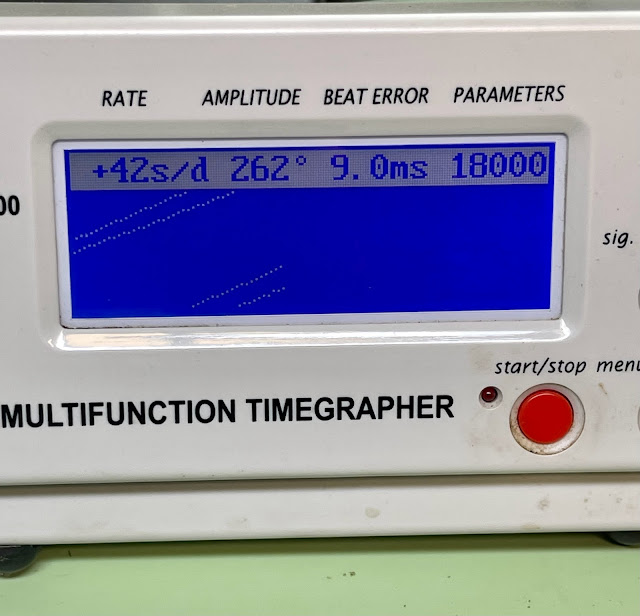 Reducing the beat error requires removing the balance and adjusting the hairspring collet to better center the balance with the pallet fork.  It can take several attempts.

Getting warmer... down to 4.2ms.  I'd like to get it to as close to zero as possible but I'm usually okay with getting below 3.0ms. 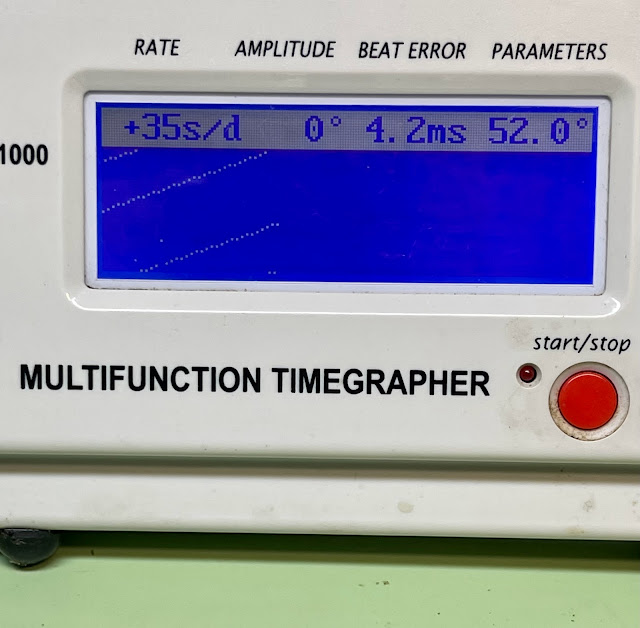 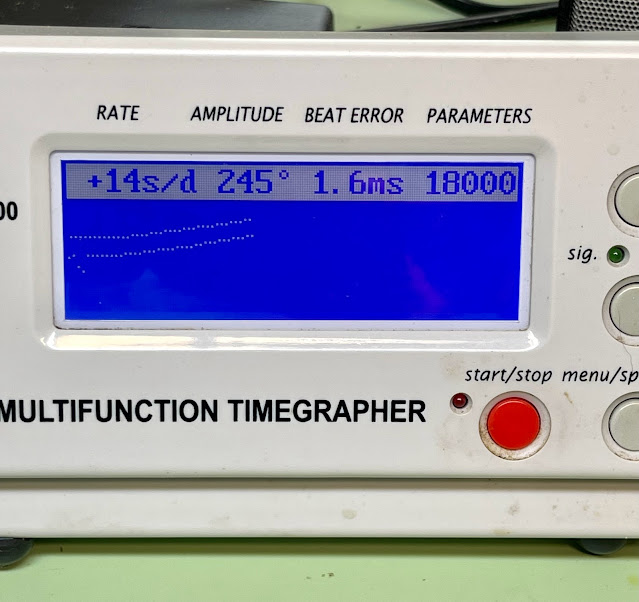 Alright - pretty much right on the money now. 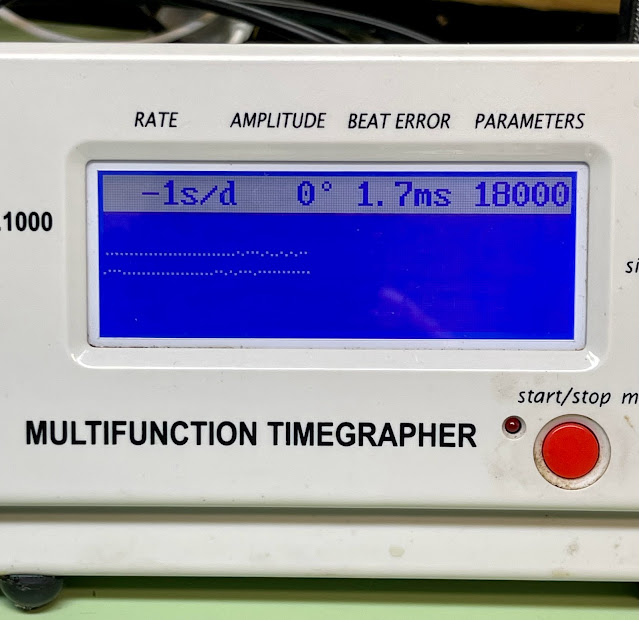 A new glass crystal completes the restoration of this great timepiece.  There's not much to do about the case so all I did was clean it in the ultrasonic.  Now the case back and bezel screw on nicely so it was just dirt holding things apart. 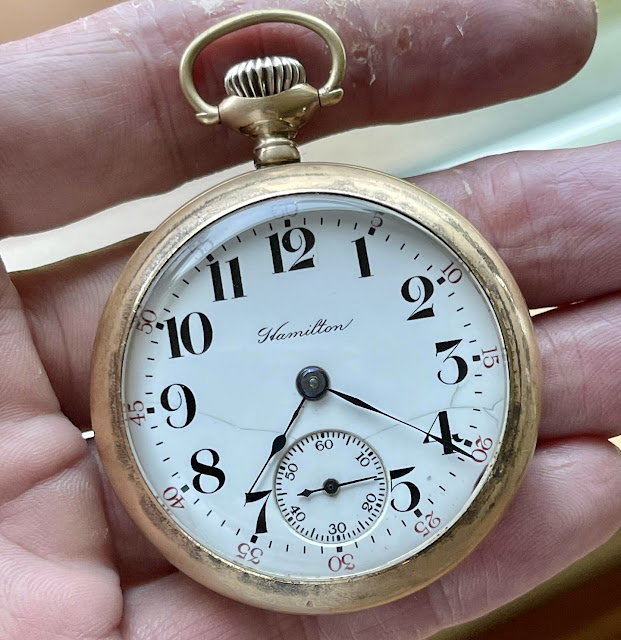 It's a nice looking movement.  Too bad I have to keep the cover on it. 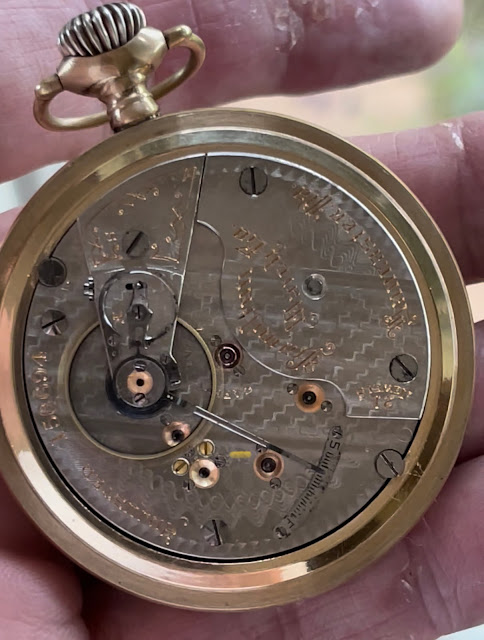