I recently posted about the 1969 Liberty Coin - a pretty rare model.  If you liked that post, you'll like this one too - it's a 1932 Oakmont.  The Oakmont was made for only three years and at the height of the Great Depression it's no surprise that Hamilton only produced 431 models in yellow gold.  They also produced models in white gold and you'll find quite a few used as sales awards for Packard automobiles, as well. 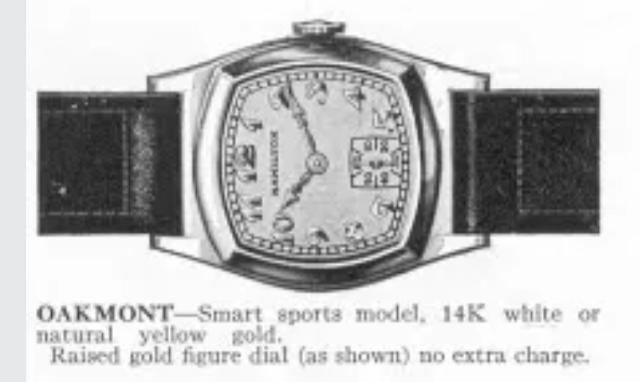 The Oakmont is part of the model line of premier wrist watches named after famous resorts / golf courses.  The line includes the Piping Rock, Coronado, Meadowbrook, among others.
In 1932 you could get the Oakmont in either a luminous dial or the applied gold numeral dial configuration.  The luminous version cost $75 and the AGN version required an additional $5 upcharge.  That's over $1600 in today's dollars. 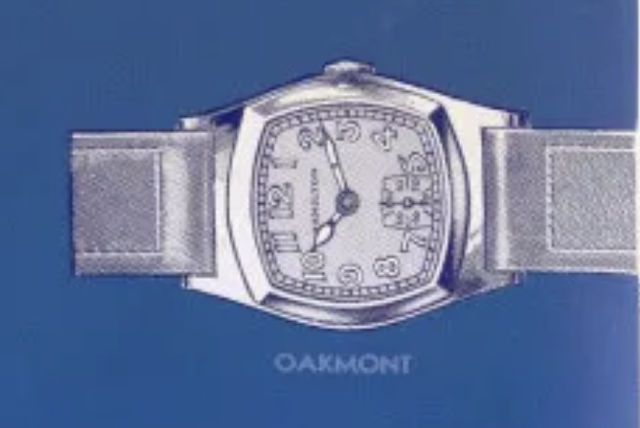 My Oakmont project watch arrived in "some assembly required" condition.  The crystal was off (and chipped) the bezel was off, the back was off, and the hands were missing in action.  I had no idea what I was going to be in for. 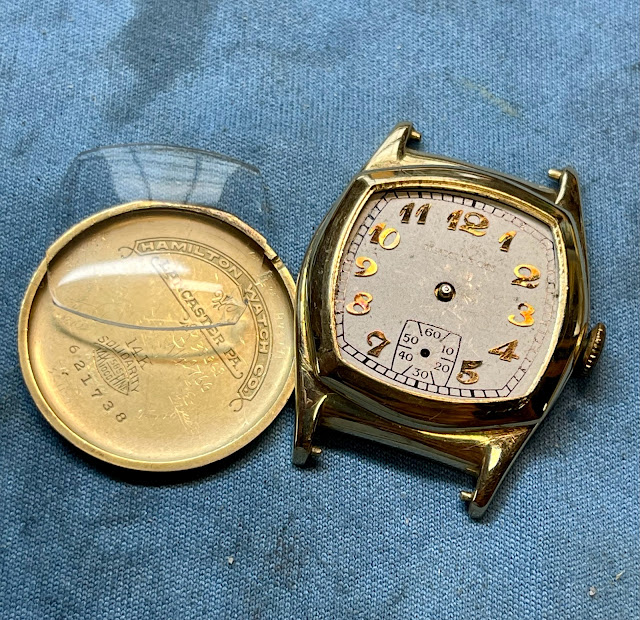 The 979F was Hamilton's premier movement of the time.  It had 19 jewels, two more than the 987F used in other men's models.  The F stands for Friction, as the jewel setting (chatons) are pressed in place and held by friction instead of screws like the previously made 987 / 979 movements.  Other than that, they are identical calibers.  The 979 also featured a solid gold center wheel.
This movement looks okay.  However, the placement of the regulator at well-past fast is a little disconcerting.  Notice the male pins on the lugs - this model will require female spring bars to mount a strap. 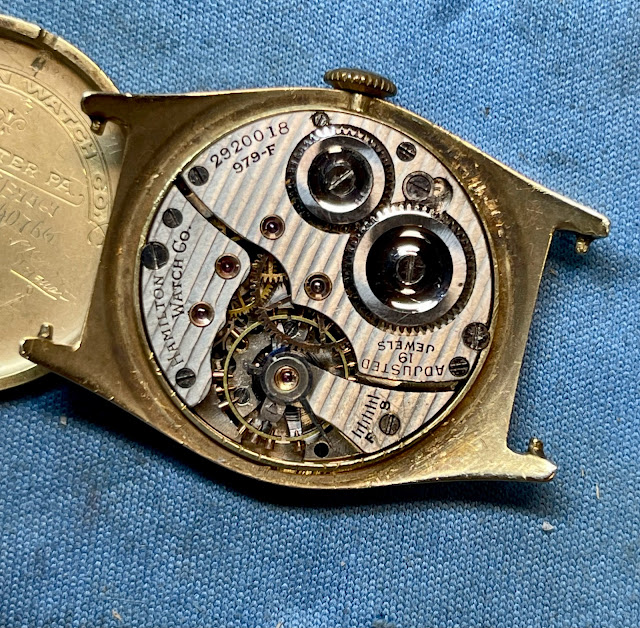 Everything gets disassembled and throughly cleaned.  I'll put it back together carefully with fresh lubricants and then try to diagnose any issues I find... assuming there are any. 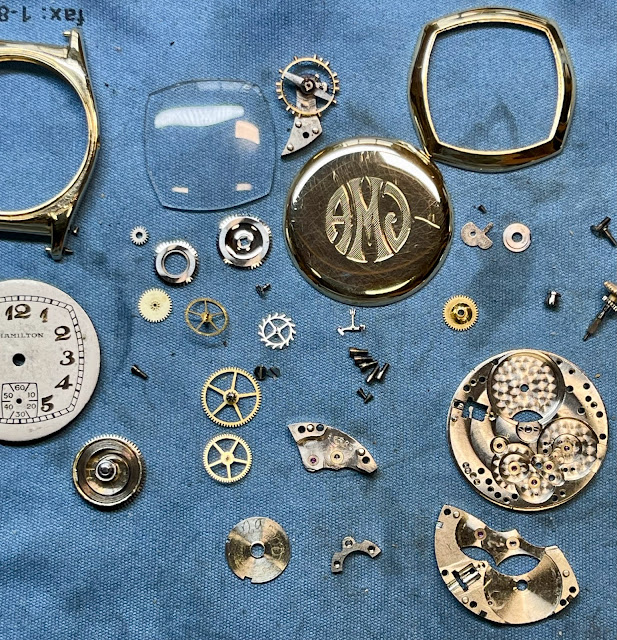 Well... it's ticking away with a good motion,  This looks promising.  I set the regulator to the midpoint to see where things land. 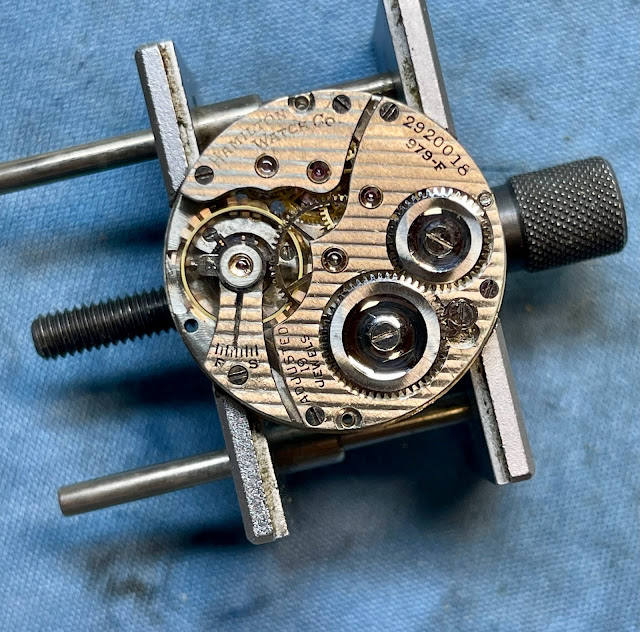 Hmmm... running about 4+ minutes slow.  That explains the position of the regulator. 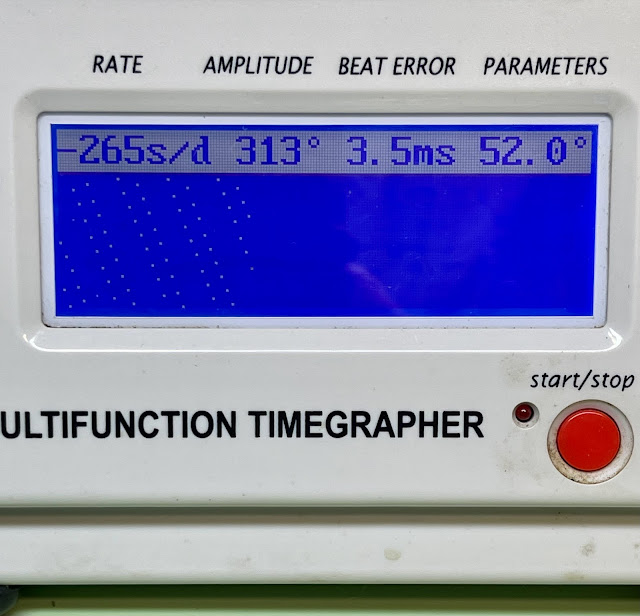 There are two screws on the end of the balance arms that are for timing adjustments.  They are like the arms of a spinning figure skater... draw them in to spin faster and let them out to slow down.  You have adjust both the same amount though to maintain the poise of the balance. 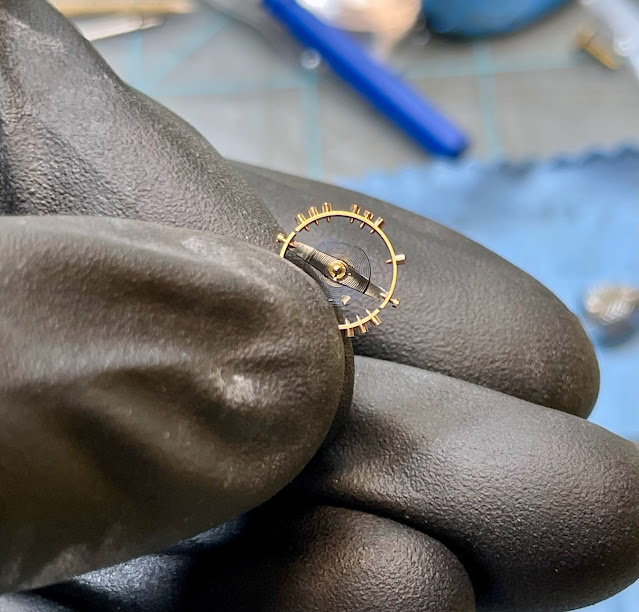 Adjusting the balance is stressful and tedious work.  One false move and you will ruin the hairspring or break a balance pivot.  Each adjustment requires reassembly and placing the movement back on the timer to see how things look. 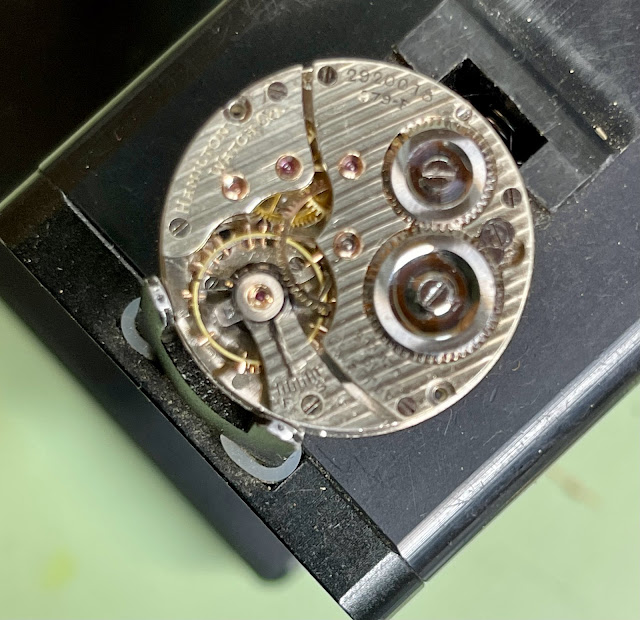 After four tries, countless drips of sweat on my forehead and all the salty language I learned in the Navy, I've got the balance looking good.  I made multiple tweaks on the timer and stopped when it was running just smidgeon fast with a great beat error. 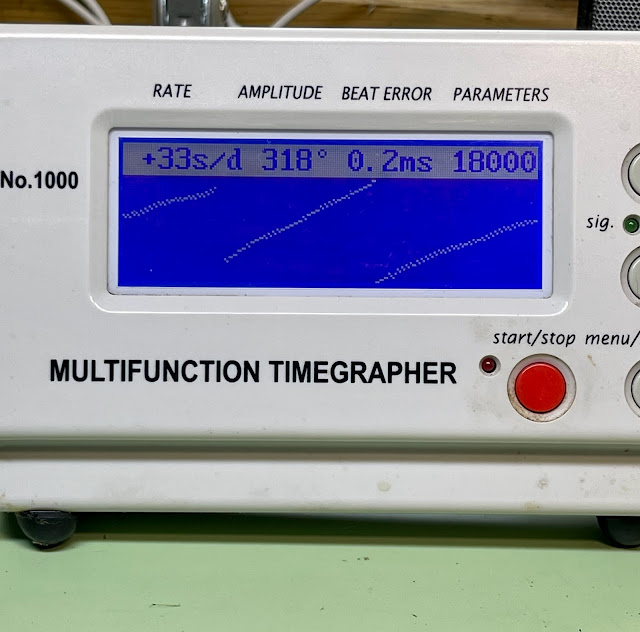 Now to address the crystal.  I have a cushion shaped glass crystal but it's too large.  I can try to sand it down to shape but it will take a while. 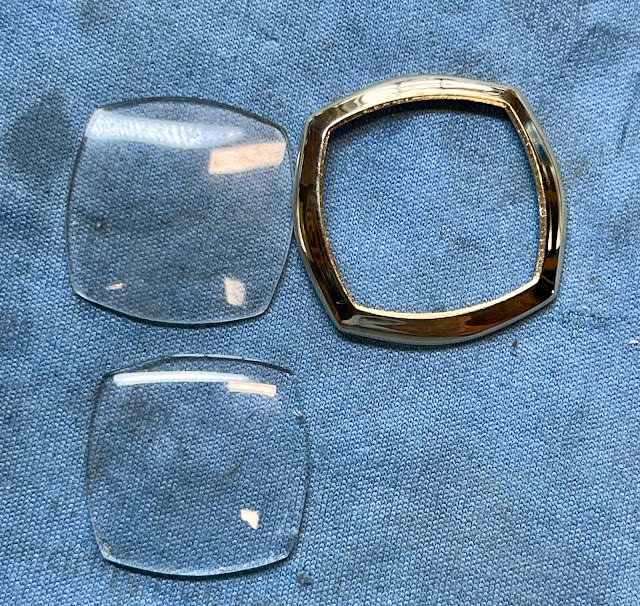 My glass crystal didn't work out... I chipped it.  So plan B is to use a plastic crystal. 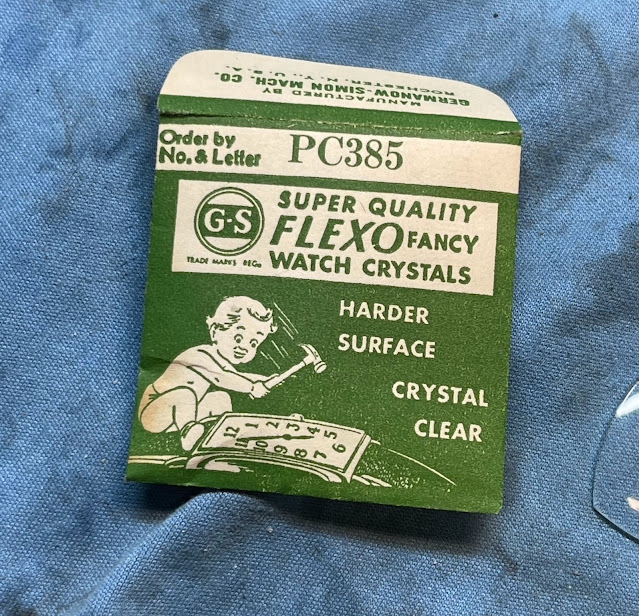 For the final step I had to open the strongbox, in the back of the safe, inside the vault, guarded by my two doberman's Zeus and Apollo, to get my stash of female spring bars.  Try finding some of these someday - you want to talk rare? 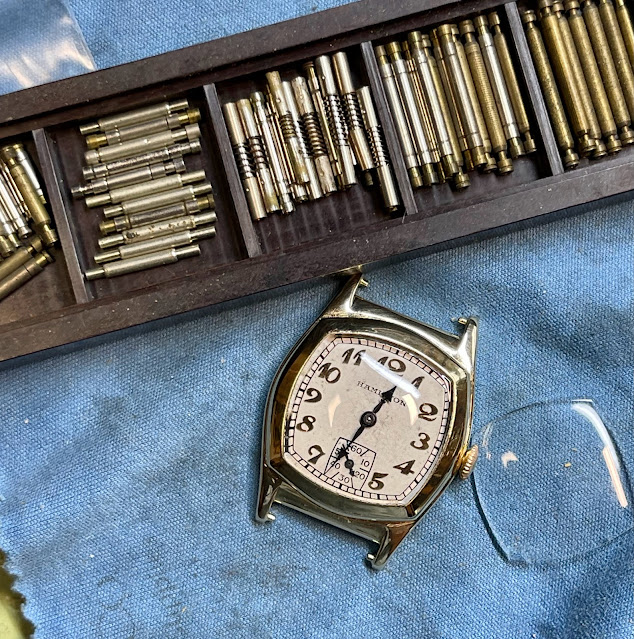 I put black spear hands on the finished watch.  That was pretty common back in the day but when I got the catalog snips for this post I realized that gold hands would be appropriate.  So I'll have to dig through my stash and find some.  Otherwise this watch looks fantastic and I'm sure its owner will be delighted with it. 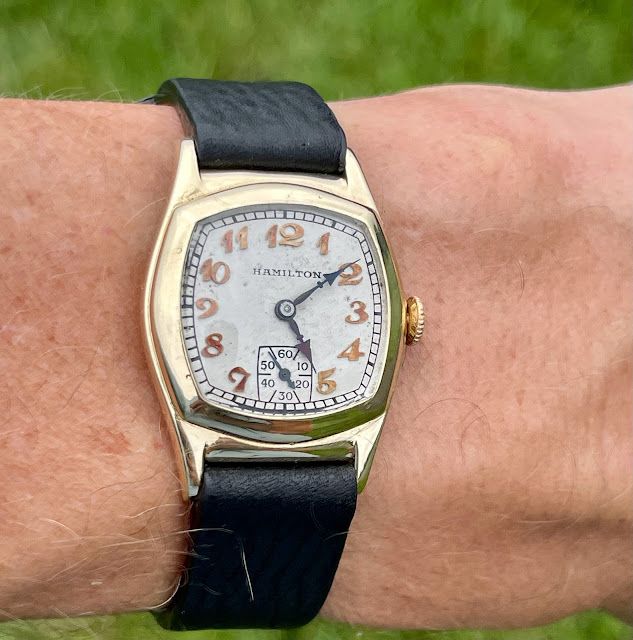 There... I dug another set of hands out of my stash.  Now this watch is perfect. 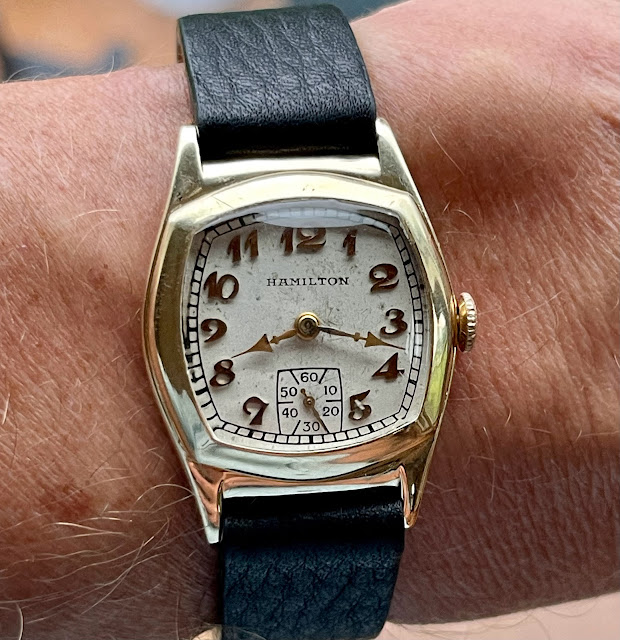 Hamilton ceased production in the US in 1969 and moved production to their factory in Switzerland that they acquired years earlier.

I imagine that as the end neared there was an inventory of US-made movements like the 770, 736 and 731 calibers and Hamilton product managers had to decide what to do with them.

Several models were created and one of the best known is the Liberty Coin.  It was not catalogued and there are no precise production figures but common estimates are under 500, which makes the Liberty Coin one of the rarest models produced.  It was offered in 14K solid gold as well as 10K rolled gold plate (RGP), the latter being more common.

One of the interesting aspects of the Liberty Coin is the minor variations you'll find.  Some examples have black baton hands while others have black dauphine hands.  The crowns used also seem to vary.  Interestingly, the model does not have a second hand - just the hour and minute hand.   That's very unusual and did they do that because the 4th wheels had bent pivots (so they just removed them)?  Also of interest, the Liberty Coin is one of the only authentic models to promote the number of jewels on the dial.  The only other models that did that are the other models I believe were produced at the same time, like this diamond-dialed version that you'll find in both yellow and white RGP cases.

I posted on the Liberty Coin 10 years ago and I recently had the opportunity to work on another so I thought I'd show it again.

As received, it is very similar to my earlier example however this one has dauphine hands and an unusually thin crown. 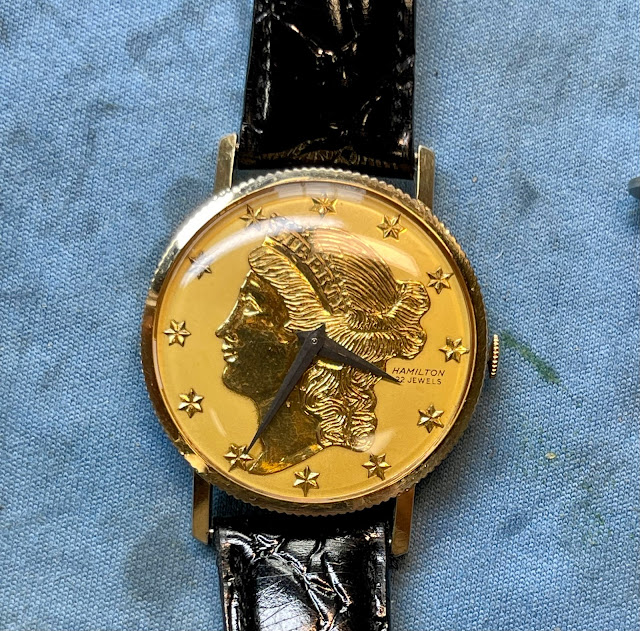 The Liberty Coin has a very crude case, in my opinion.  It's clearly marked Hamilton on the back but not very precisely.  This is an RGP example and I won't polish it as I suspect the plating is very thin. 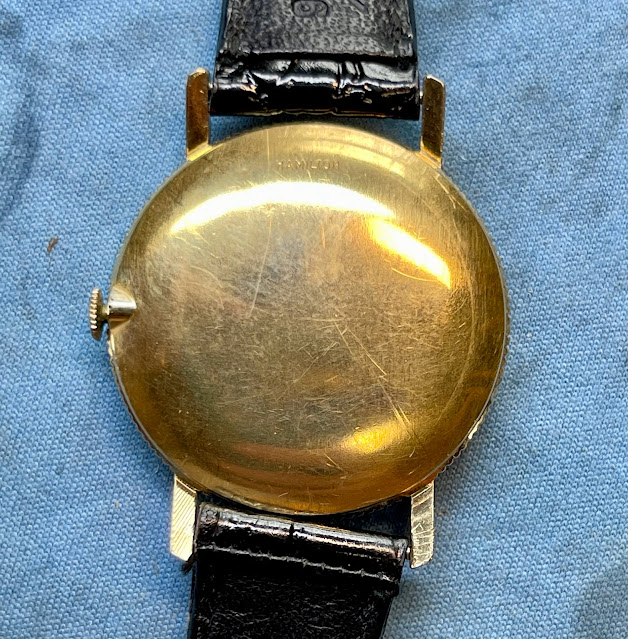 This watch features a black strap just like on my example... it's some sort of reptile, croc or alligator I suspect. 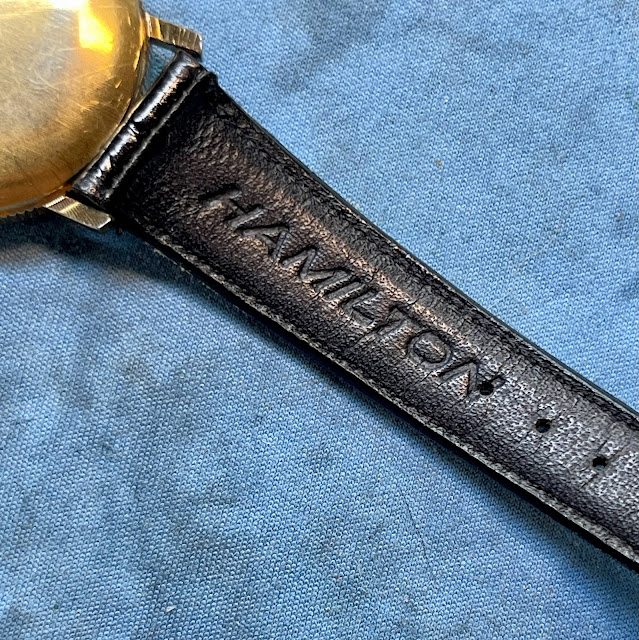 I don't think I've ever seen a crown with such a long stem tube before.  This is a very unusual crown and I don't know if it's the original crown of if it was replaced sometime over the last 50 years.  Based on the wear, I'd wager it's original.
The 22 jewel 770 movement was introduced in 1955 and if you look closely at this version the balance is a glucydur design without any timing screws.  It's very interesting that the 770 didn't get a new caliber number like the 730 and 735 did when they received glucydur balances and where thereafter known as the 731 and 736 movements. 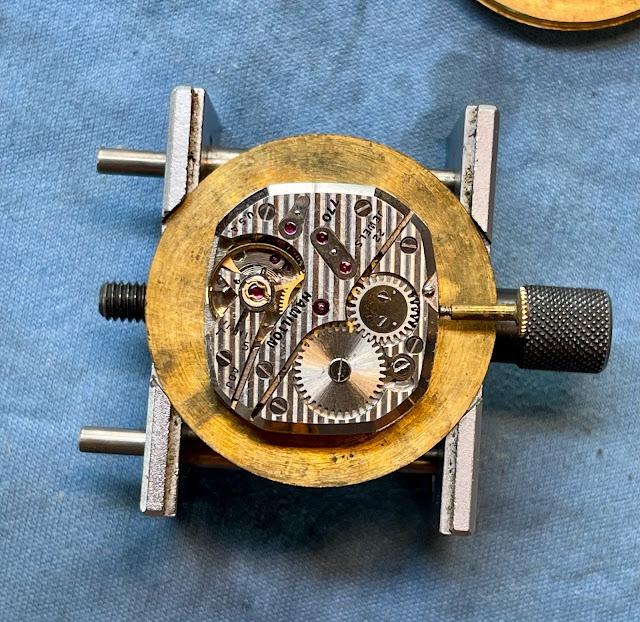 The inside of the case back is also crudely finished.  If I didn't know any better I would say this wasn't an authentic model.  After 1940 99.9% of Hamilton cased will be stamped inside with "Hamilton Watch Co. Lancaster PA", along with a serial number.  This case simply says 10K RGP. 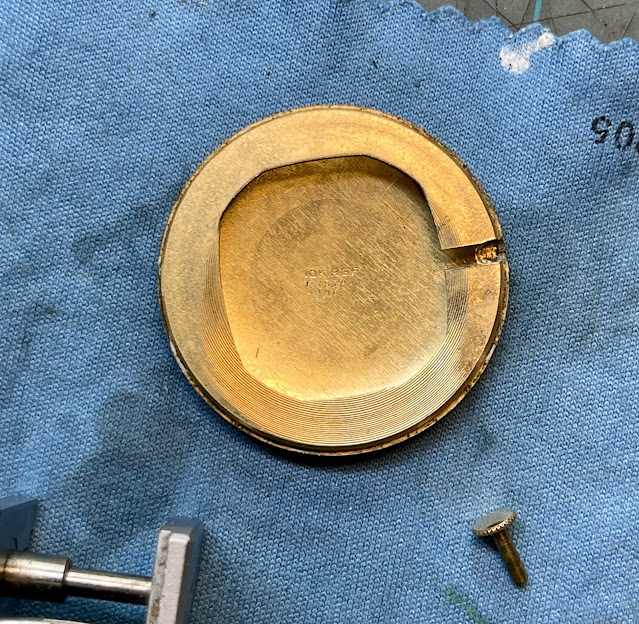 Everything gets cleaned and dried before being reassembled.  I like the 770 movement, it goes together very smoothly. 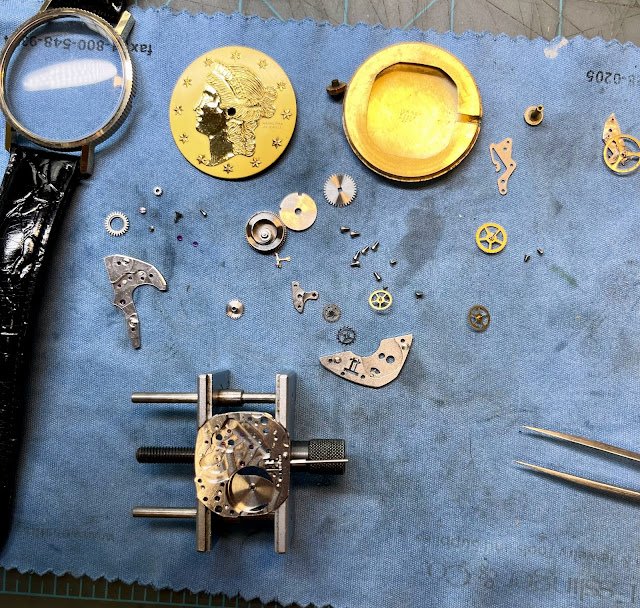 The reassembled movement is ticking away with a good motion so it's off to the timer to listen to the ticking. 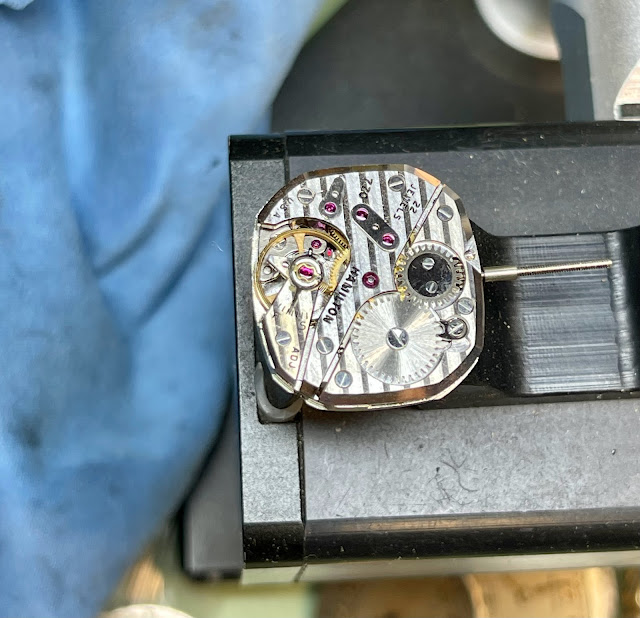 It's running a smidgen slow but that is easily corrected with a slight tweak of the regulator. 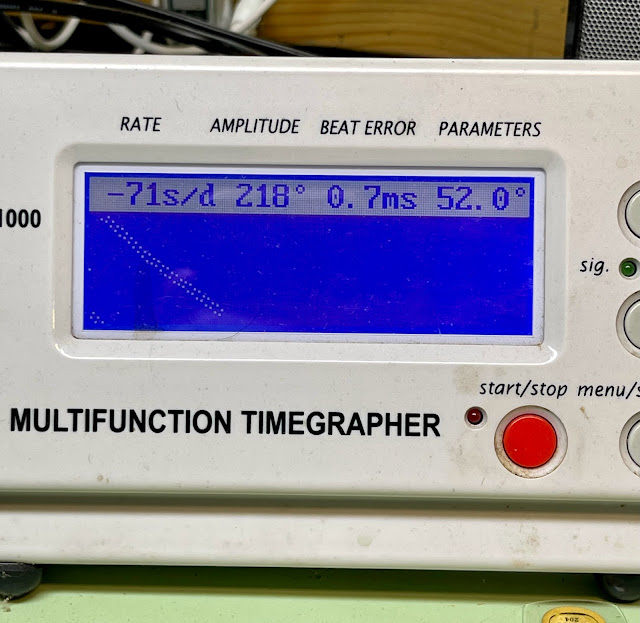 The owner of this example wanted a new crown installed and specifically a stone crown like on my example from 2012.  Stone crowns include a gem and you'll find them in a variety of colors like red, green or this one - blue. 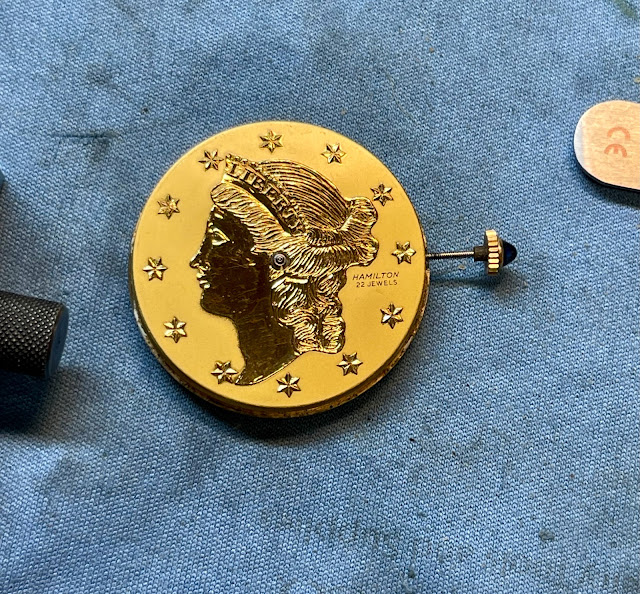 The finished project looks as good as it runs and the new crown looks much more appropriate than what was on it, don't you think? 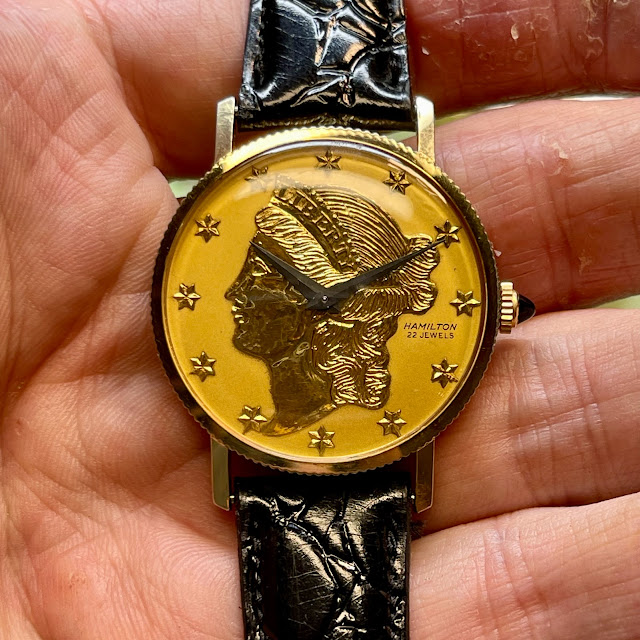