In the early days of Hamilton wrist watches the first models were named after their shapes.  For example you had the Cushion, Oval or the Rectangular.  Sometimes they got creative and added other features like if it was engraved or if the bezel opening was a different shape - like a Cushion Round.

Fairly quickly they ran out of shapes so other themes emerged like famous resorts of the time... Piping Rock, Coronado, etc. and there was also a unique line dedicated to noteworthy explorers (Bird, et al).

By the early 1930s most mens' models received mens' names - often more unique names versus common names.  For example there's a Webster but no Peter.  I suspect models were named after people important to the Hamilton factory or Lancaster area but I've never seen a specific list of who inspired which model.

In the 1950's there were lots of new models introduced, perhaps too many for marketeers to come up with names so they adopted numbers for certain lines.  The first automatics were called Automatics and the series was K-something.  What was the K for?   I'll tell you...  I don't know.  If I had to make a guess I would say it stood for Kurth, as Kurth Freres was the Swiss-maker of the initial K-series of automatic movements for Hamilton.  However Eterna made some early models too so that theory may have some flaws.

Anyway, sometimes the model name makes you wonder what the genesis was.  An example is the 1958 Lansing.  Was it named after the city in Illinois or was there an employee at the factory named Lansing?  Was it the twin brother of who ever inspired the Courtney - as the two models are very similar.

Regardless, the Lansing was produced for only two years and you don't tend to see them very often.  If you do see one, it may actually be something else, as there are other very similar looking models like the 1958 Courtney. 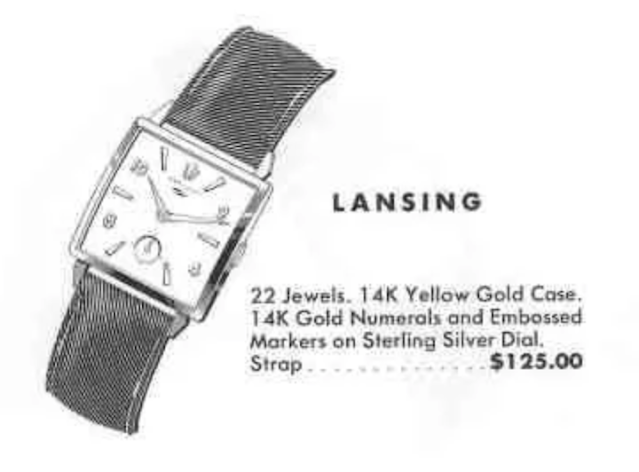 The Lansing was cased in solid 14K yellow gold.  It's an interesting model in that it features a dial with both embossed (stamped) markers as well as 14K applied gold numerals.  That's pretty unusual but the 1950s introduced a lot of never-before-seen features.
The 1958 catalog shows the model has a 22 jewel movement.  That can only mean one thing - the 12/0 sized 770 movement.
My Lansing project watch came courtesy of the nephew of the original owner.  Family watches make wonderful heirlooms.  It was a little tarnished from a few decades in a drawer but still worked when wound.  That's always a good sign that all it needs is a good cleaning. 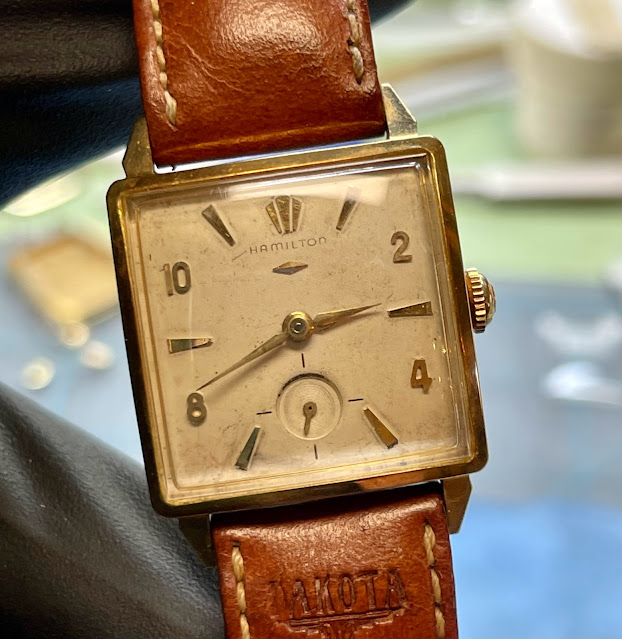 The back of the 14K case is engraved with a presentation for 20 years of faithful service. 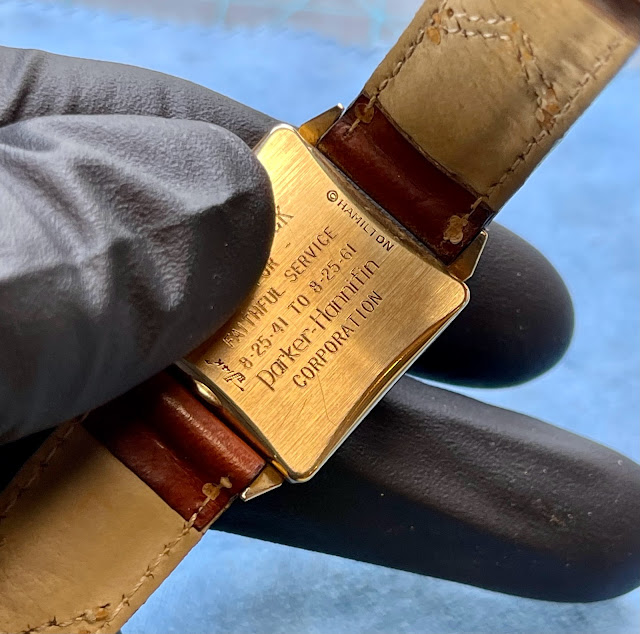 I didn't see any previous watchmaker's marks inside the case back so I may be the first person to actually work on this watch since it left the factory.  Notice the soft haze on some of the parts.  This will make for a significant before and after comparison.  There is no rust inside so I think this is just the result of many years sitting in the same place. 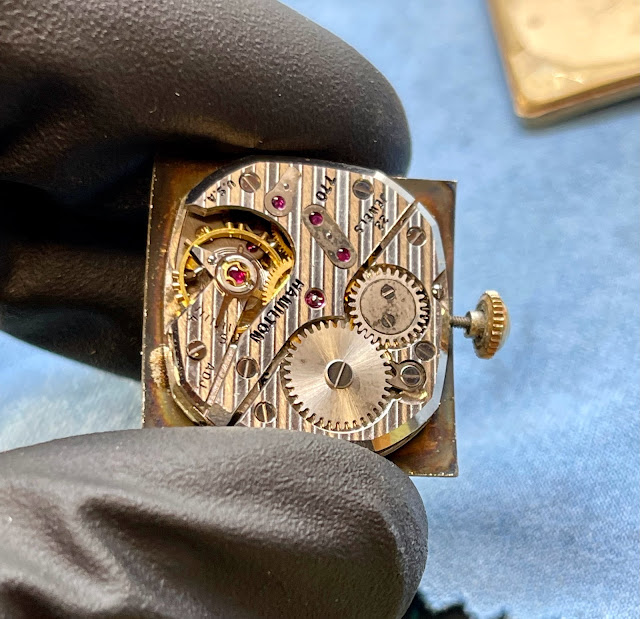 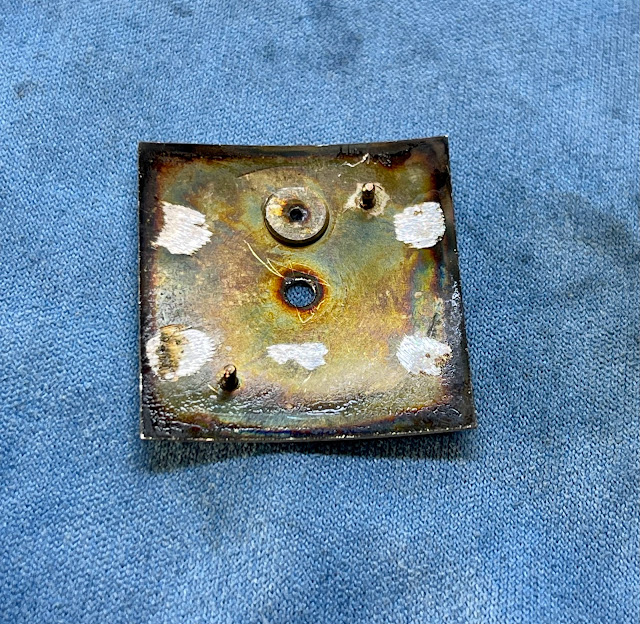 The printing on the dial is a bit faded and although the dial is a bit patina'd I don't want to risk losing the printing by cleaning the dial.  I'll give a very gentle rinse but nothing to risk damage - as, based on my experience, getting embossed dials refinished rarely has good results.
All of the parts are stripped and cleaned in my ultrasonic cleaner before being reassembled.  I like the 770 movement - it goes back together so smoothly it almost reassembles itself. 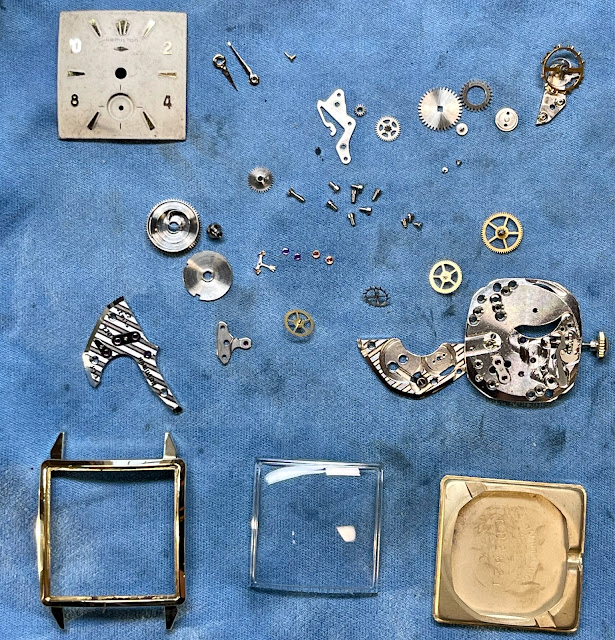 Notice how much brighter the freshly cleaned movement is.  It's ticking away with good motion - time to see what the watch timer thinks. 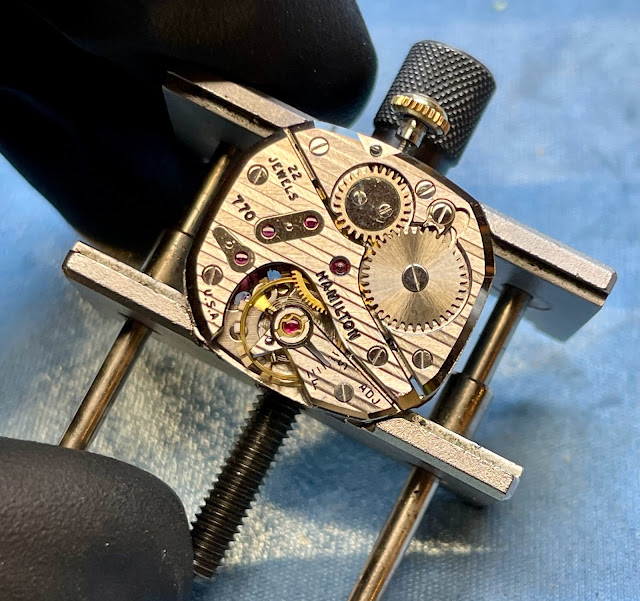 Not too shabby.  The amplitude is vigorous and the beat error is within my personal specs.  It could be lowered by trial and error but each attempt risks disaster if something happens to the hairspring when the balance is repeatedly removed and reinstalled.  The Swiss-made models in the 1960s with moveable hairspring studs were a huge advancement in terms of making adjustments.  However, the US made movements can be a challenge to get the beat error near zero.  The impact of the beat error isn't huge.  A watch with zero beat error will run a little longer on a full wind but the negative impact of a beat error under 3.0ms is pretty minimal. 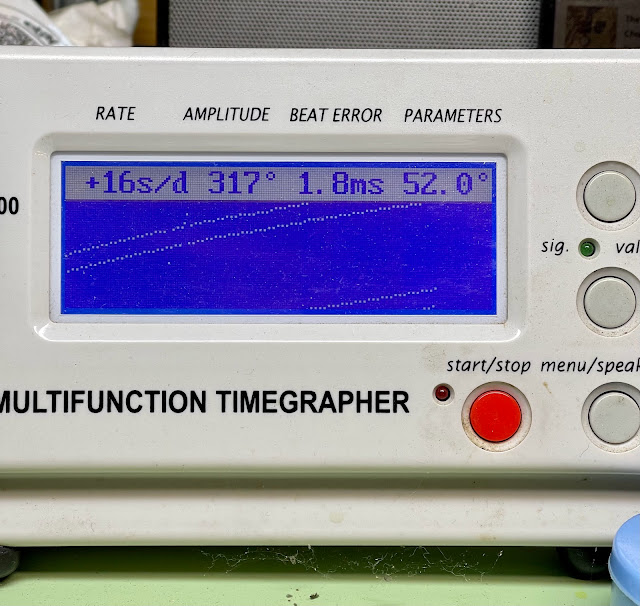 A gentle polish of the case and crystal, along with a fresh genuine lizard strap, complete the restoration of this 60+ year old Lansing.  The patina on the dial is appropriate and makes it look like the vintage watch that it is.  I'm sure the owner will be very happy with the results. 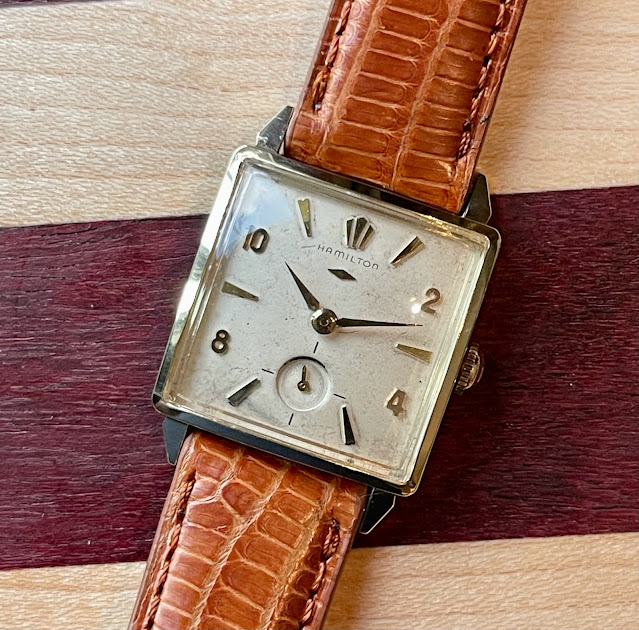 Posted by HandyDan at 9:04 AM No comments:

Happy New Year!  May your new year resolutions be successful, and may you find peace, purpose, and prosperity in 2022.

My first project of 2022 is one of my own projects that I picked up a while back.  It's a unique model that you don't see everyday. 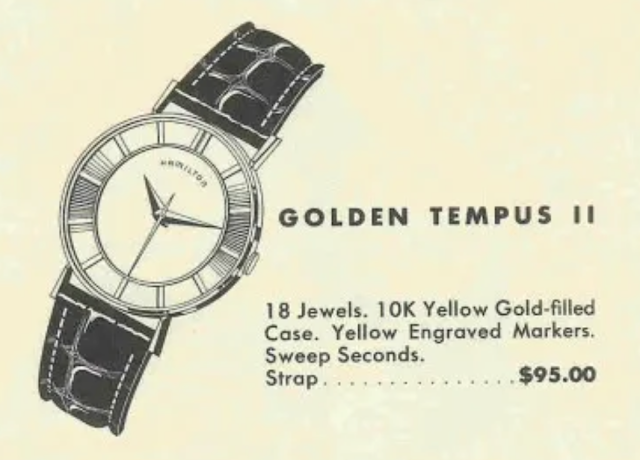 As you might suspect, there was also a Golden Tempus introduced in 1957.  It was similar to the Golden Tempus II but cased in solid yellow gold with more dramatic lugs. The Golden Tempus II was cased in 14K gold fill.
The model is unique in that the case, dial, markers, etc are yellow but the hands are silver (rhodium plated).  That's not a very common attribute for Hamilton models, typically models are one color or the other.
Tucked inside the case is an 18 jewel US made movement and post 1955, that would imply a 735 movement.
My project watch arrived in fairly good condition and showed wear and tear consistent with being 60+ years old.  The second hand is yellow but the hour and minute hands are white/silver.  I suspect the second hand is a replacement. 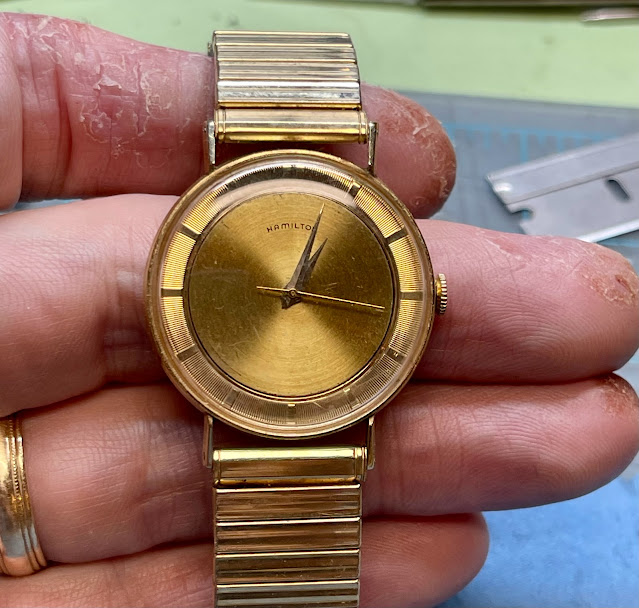 The back of the case could stand a little polishing but is otherwise unremarkable. 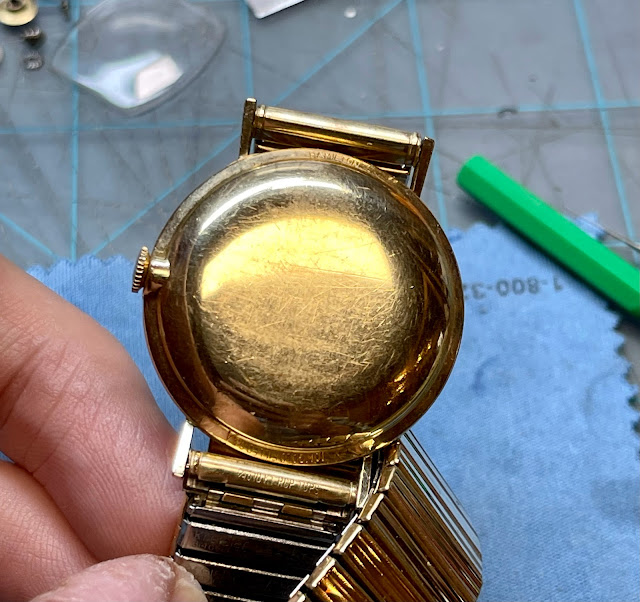 The yellow chapter ring is integral to the bezel and the dial is actually a smaller circle that fits inside the ring. 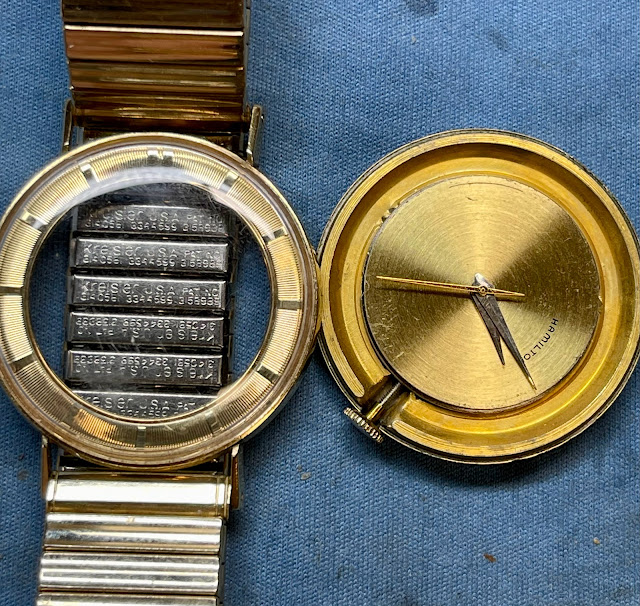 The 8/0 size 735 movement is essentially the same as the earlier 748 movement other than the addition of shock jewels at the balance. 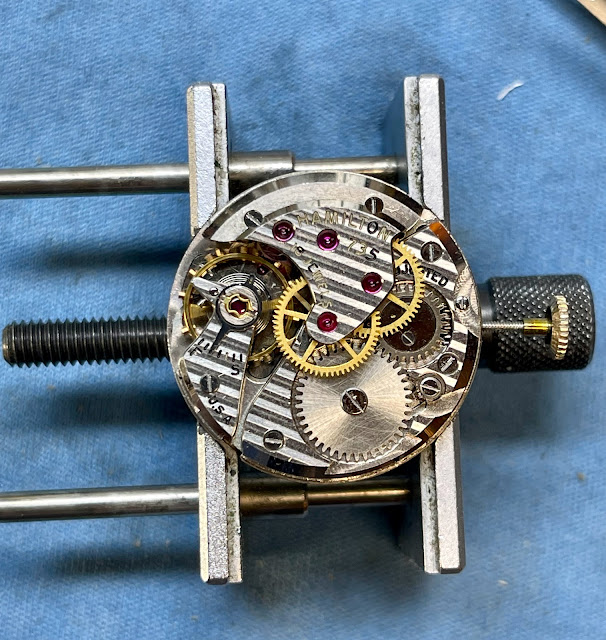 There are several prior watchmaker's marks inside the case back.  So that shows this watch had a lot of use and was well taken care off - but it may have some mileage on it as well. 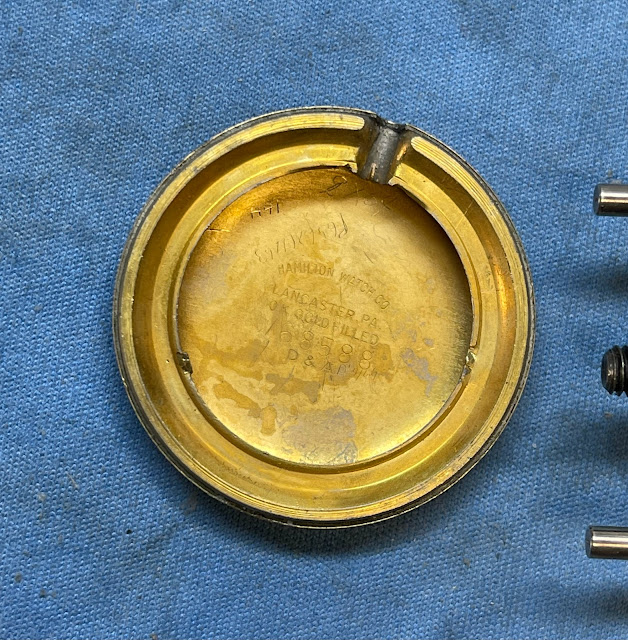 Everything is cleaned and thoroughly dried before being reassembled with fresh lubricants.  I also installed a new crystal to brighten up the outside of the case. 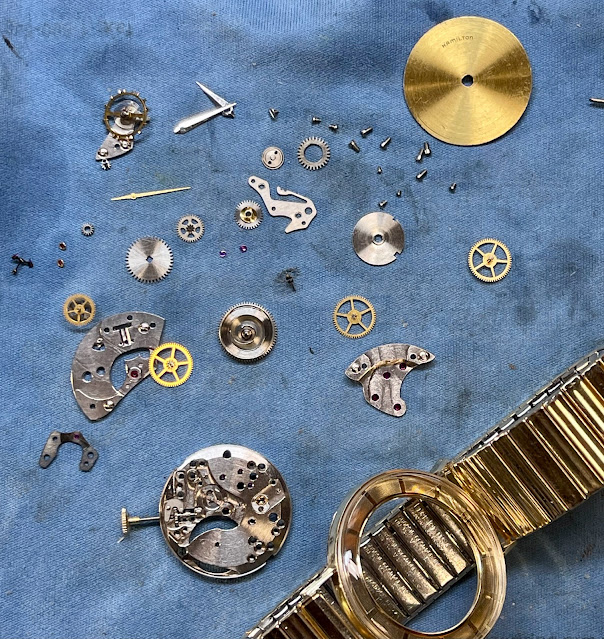 Reassembling the 748 and 735 movements can be a bit daunting.  Most of the wheels have very long axles and getting all four wheels to line up at the same time takes a bit of finesse.  I don't tend to sweat it now but in my earlier days I would usually think twice before taking one apart.  I also filled in the black enamel on the Hamilton lettering on the train bridge.  It looks much better now than when I started. 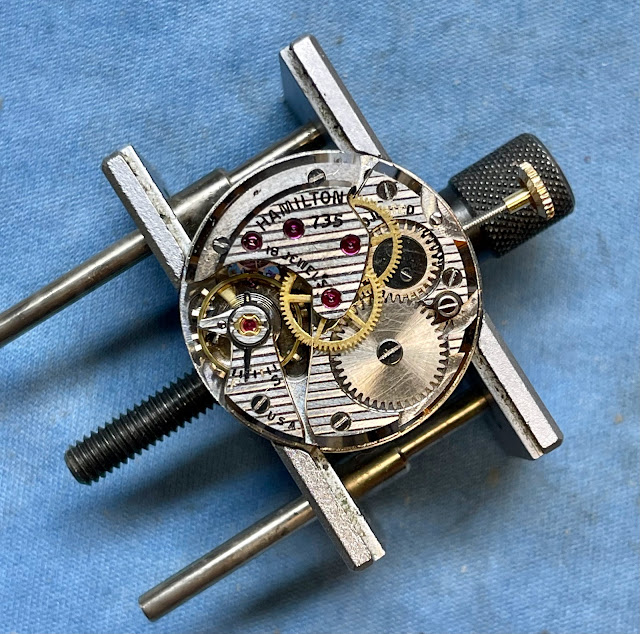 It's running a wee bit fast according to the timer but I should be able to adjust it. 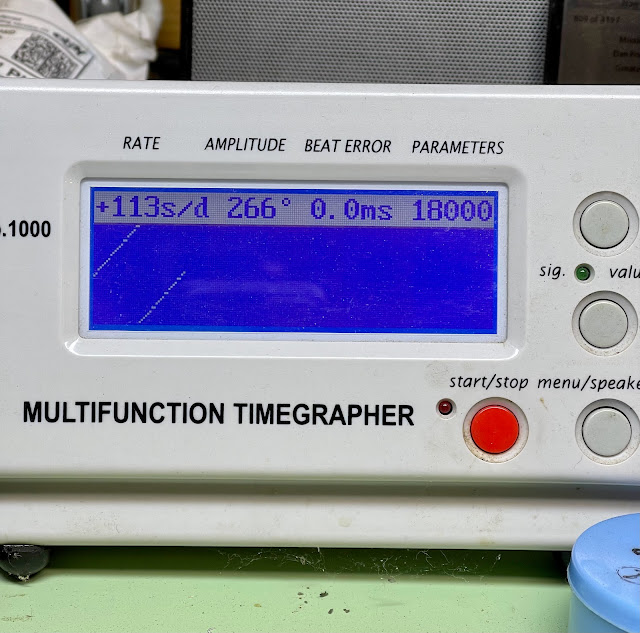 Looks like the regulator is pushed toward fast so I'll back that off a bit. 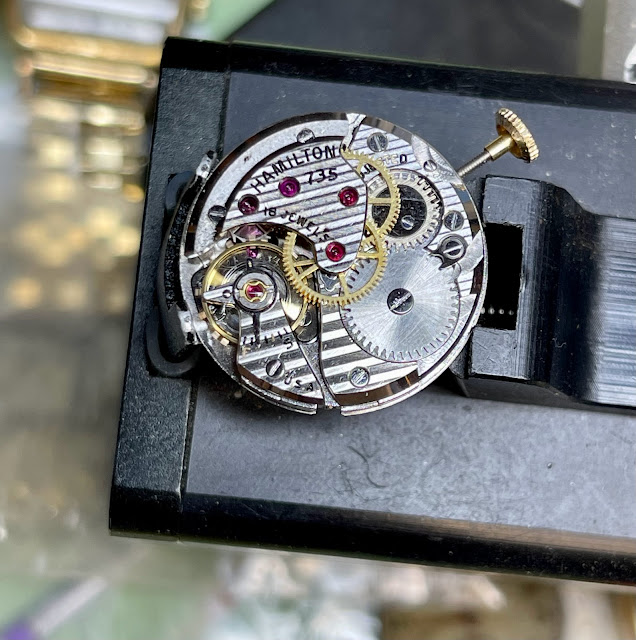 There... that's a lot better.  I'll leave it running a smidgeon fast as it may settle down after a while. 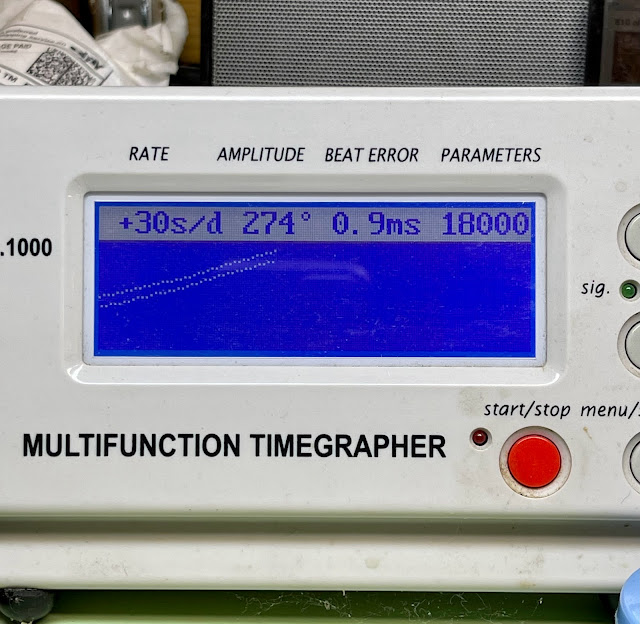 My finished watch looks much better, don't you think? 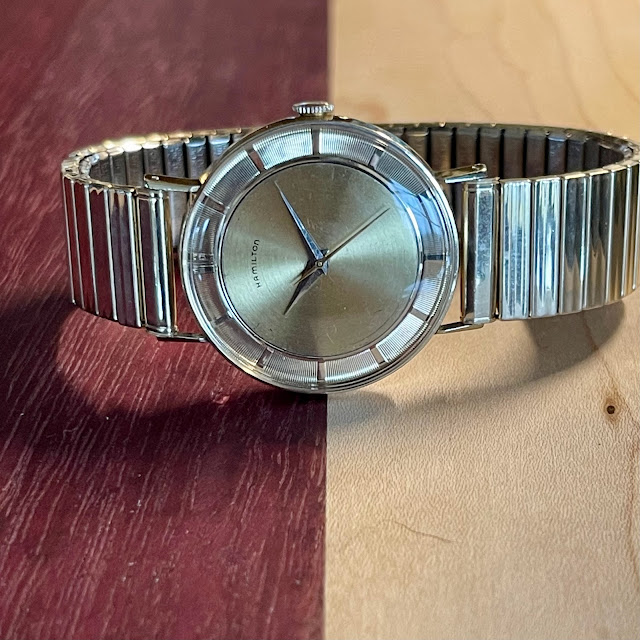 I searched my stash of parts and found a silver second hand that fit the post of a 735 so now it's closer to what it would have originally looked like.  This is a very unique and stylish watch with a lot of sparkle! 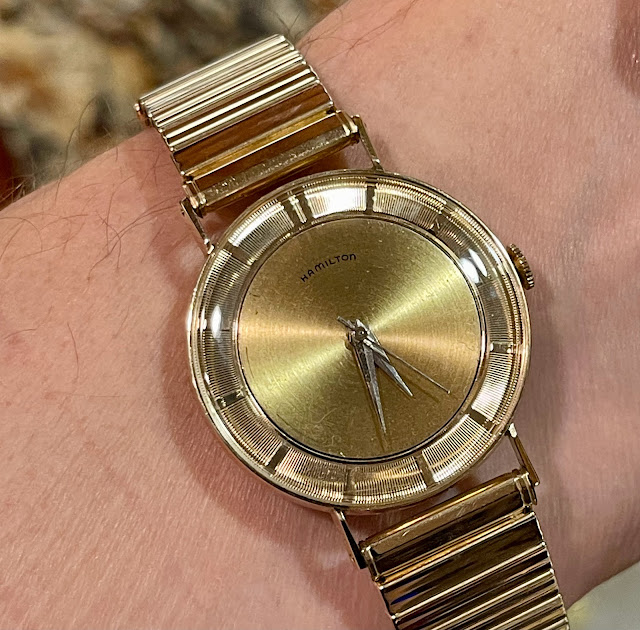