If you collected all of the Sea-somethings in Hamilton's lineup you'd have to locate almost 50 watches - even more if you wanted all the variations.  One of the harder ones to find would be the 1964 Sea Baron - it was only made for one year.

The old salt in me appreciates the name of this model… the Sea Baron.  It's a sharp looking watch too.

The Sea Baron comes in a one-piece 10K rolled gold plate case.  Rolled gold is similar to gold filled but there's a much thinner layer of gold surrounding the base metal.  Being a one-piece case, the watch is a front-loader and opens through the crystal.

Tucked inside is a 17 jewel Swiss-made Hamilton 688 movement.  If it looks familiar, it's probably because I just did another one yesterday.  I occurred to me that I haven't shown a step-by-step overhaul of a 688 yet (you can see other overhauls in the menu on the right).  So I'll show you below what an overhaul entails.

My project watch is actually pretty nice looking.  It even came with a relatively new-ish strap but I'll change that out for a more appealing color later on. 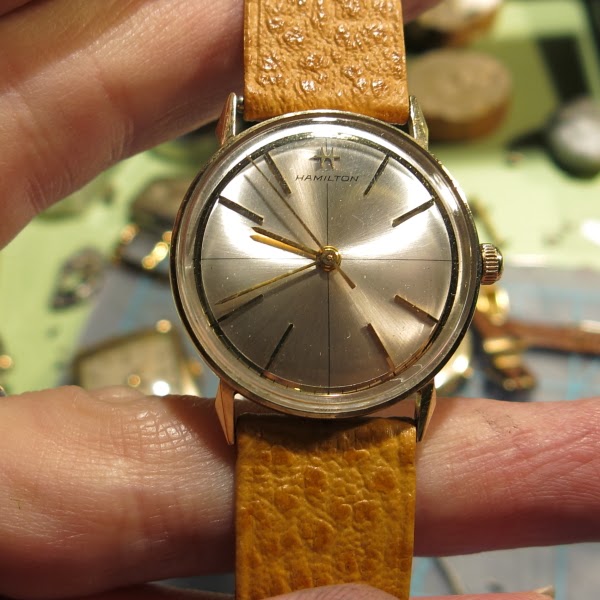 My project watch was listed as "running" and it is - but it's running like crap.  It might even keep decent time but I doubt it based on the display in my timer.  A well-running watch will present as two parallel lines, ideally running horizontally.  If the lines trend upward, the watch is running slightly fast.  If they trend downward, it's running slow… the steeper the trend the more off the watch is running.

Anyway - as you can see below, there are no lines at all.  This watch is making a lot of noise inside, even though it's running.  So it's definitely a candidate for a cleaning. 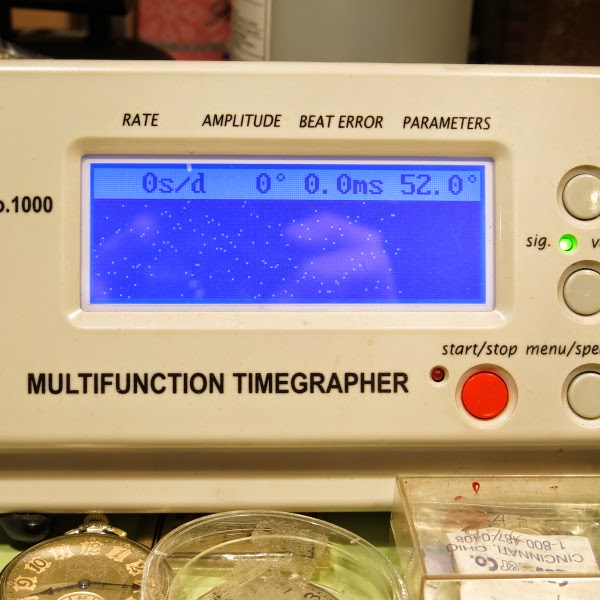 Apparently "Laura" gave this watch to "Tony" in 1964… it's not "love Laura", just "from Laura" - kind of makes you wonder the circumstances of the presentation… did they later marry?  Did they break up the following year and Tony stashed the watch in a drawer so his future wife didn't get pissed that he wore it?  Hmm... 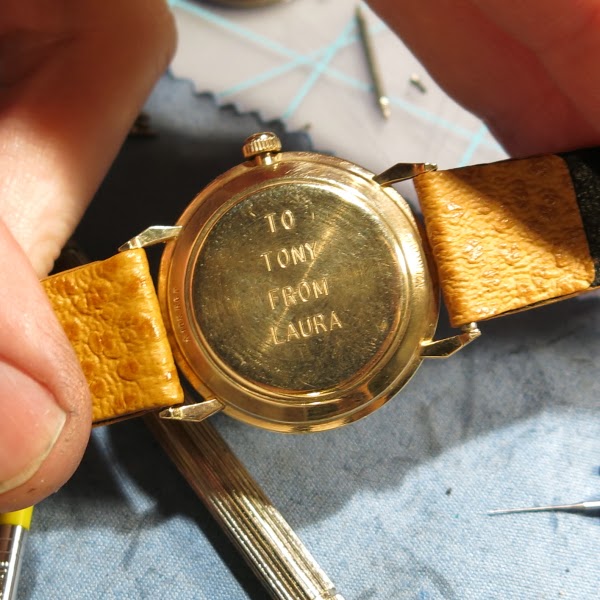 With the crystal out of the way, now's a good time to remove the hands so they don't get snagged on anything while I remove the movement. 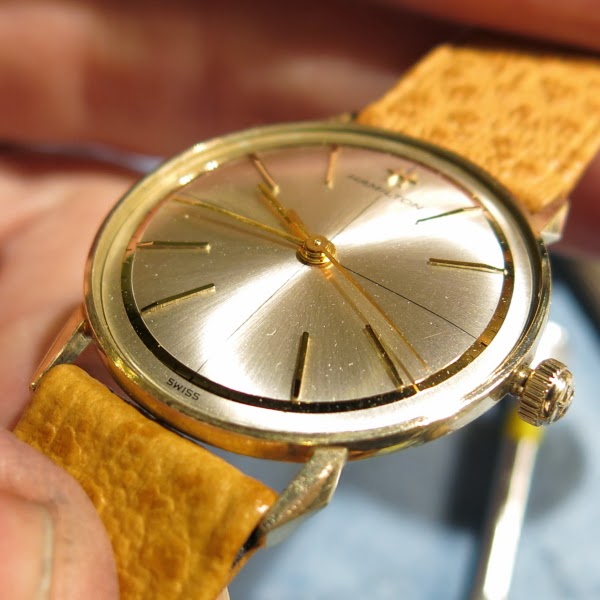 To get the movement out, you need to line up the female portion of the stem so that the open side is facing outward, that will allow the movement to pivot out using the stem as a "hinge".  Once you get to about 45 degrees it will release and the movement will be separated. 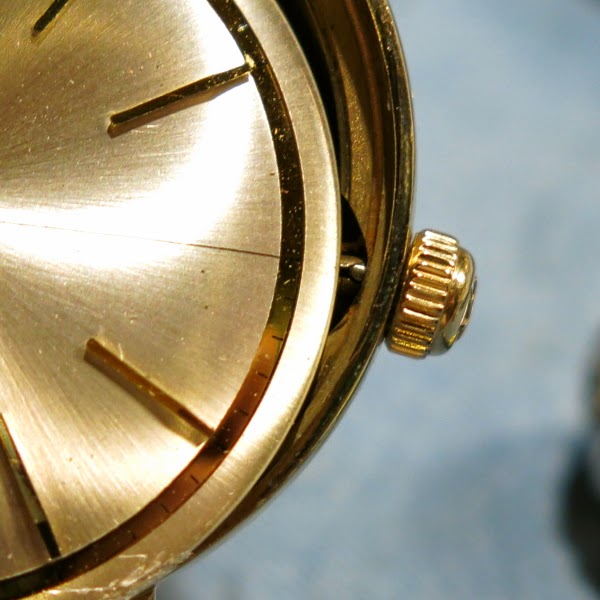 There are no marks inside the case back so I doubt this watch was ever presented to a watchmaker for service. 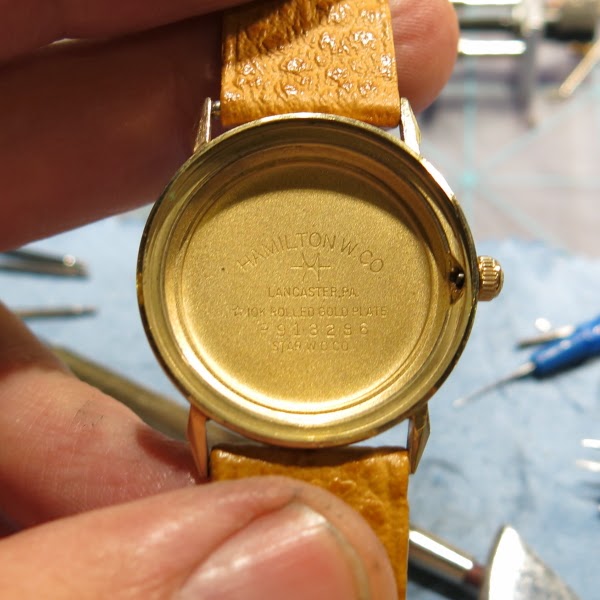 The ETA-based movement is fairly clean but something is making it run poorly.  I'm always surprised by how much dirt and debris is left in the cleaning solution after I run a movement like this through it.  I can get about two watches out of a batch of solution before I change it out with fresh solution. With the dial out of the way, the first thing off the front is the hour wheel in the center. 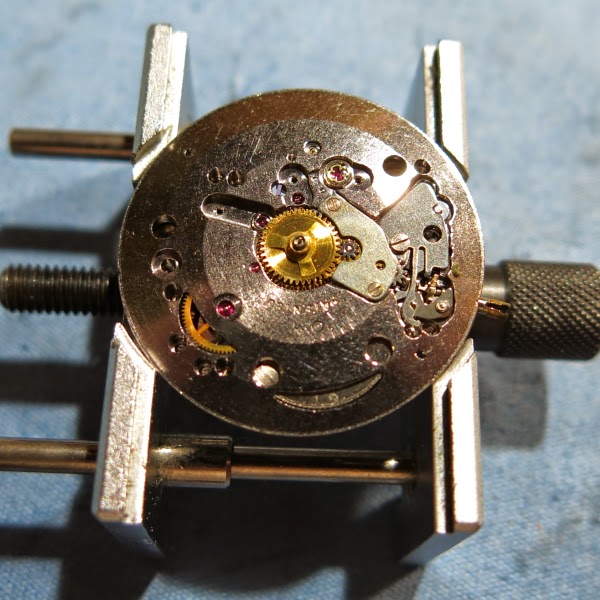 Next off is the small bridge that covers the minute wheel and the setting wheel next to it. 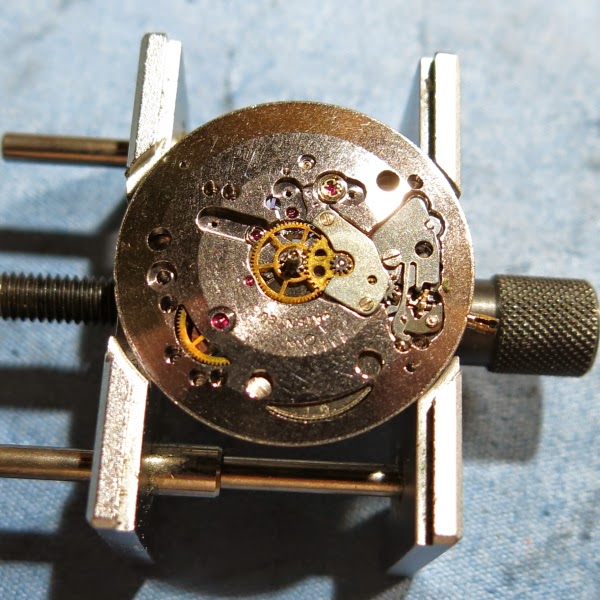 The gold-colored minute wheel is what synchronizes the hour and minute hands.  It comes out next, along with the small setting wheel to the right of it. 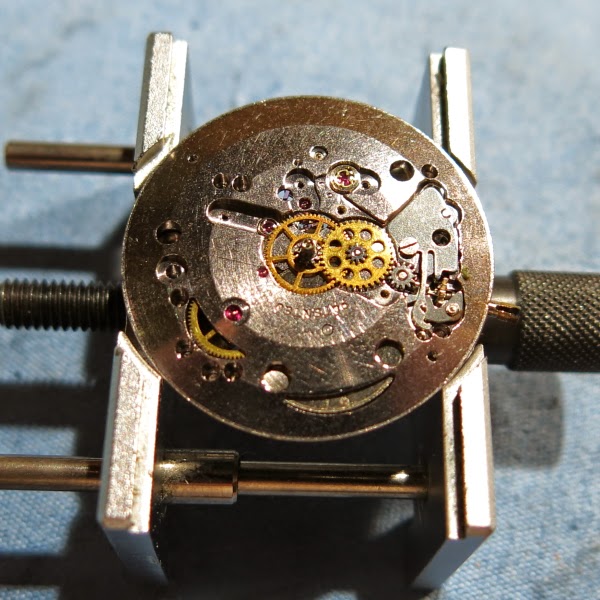 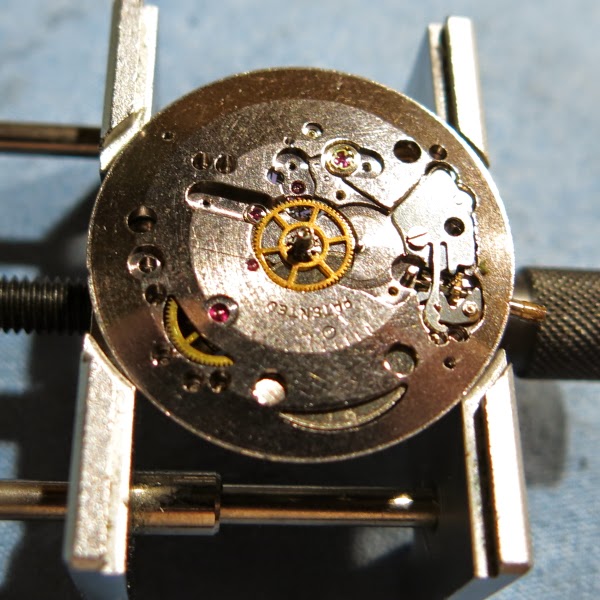 Next the movement gets flipped over.  With all the mainspring tension released, the large ratchet wheel and the smaller winding wheel next to it are removed.  The threads on the ratchet wheel are opposite hand so you loosen it by turning to the right (as opposed to the left as on the winding wheel screw and all the other screws).   If you didn't know this, you would break the screw if you turned it the wrong direction. 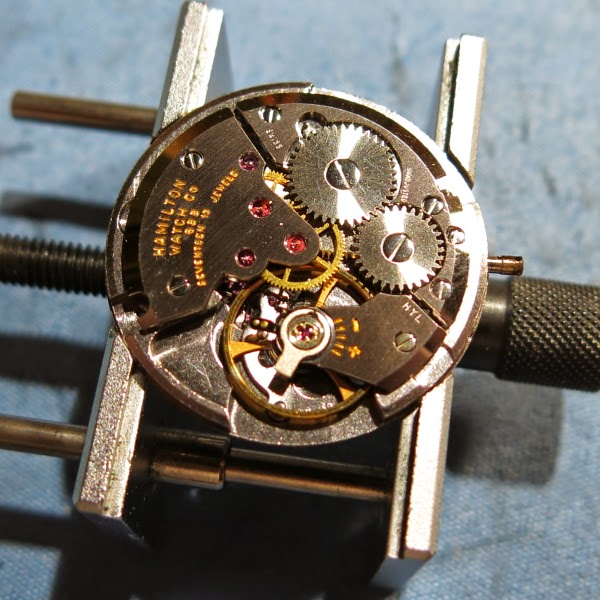 You have to be careful when you take the winding wheel off this movement because right under it is the click and click spring.  They are just sitting there and if you're not careful they can fly out and get lost.  Now I'll remove the three screws that hold the barrel bridge on and take the bridge off. 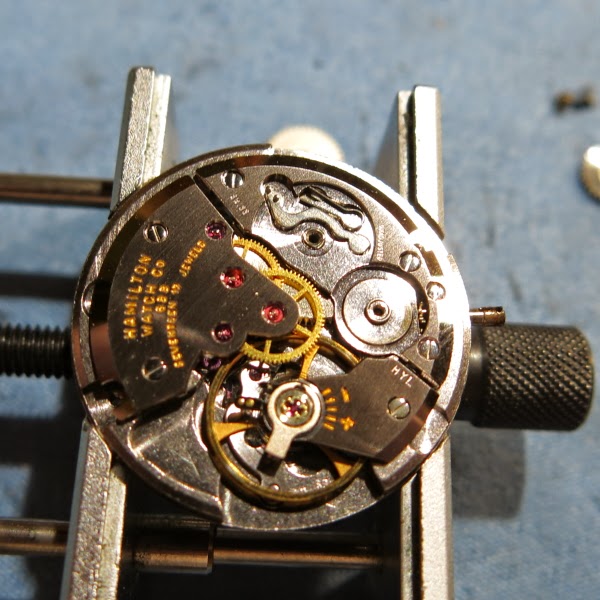 With the barrel bridge out of the way, you can see the mainspring barrel.  Now I'll remove the two screws that hold the train bridge on.  That will give me access to all the wheels below it. 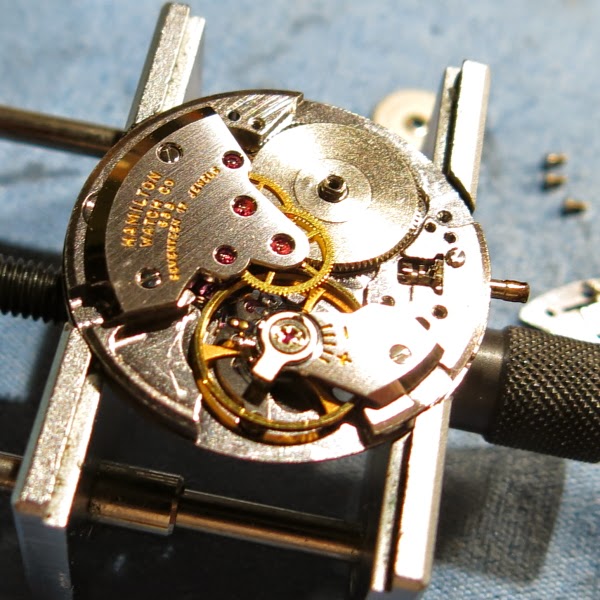 Now you can see all the wheels, starting with the mainspring barrel.  It's the "first wheel".  It drives the center wheel directly to the left.  The center wheel drives the third wheel, which is sitting on top of the barrel.  That, in turn, drives the fourth wheel in the center of the movement.  The other end of that gets the second hand.  The fourth wheel drives the escape wheel, which is darker and just off to the left in the photo below.  All of these parts can come out now. 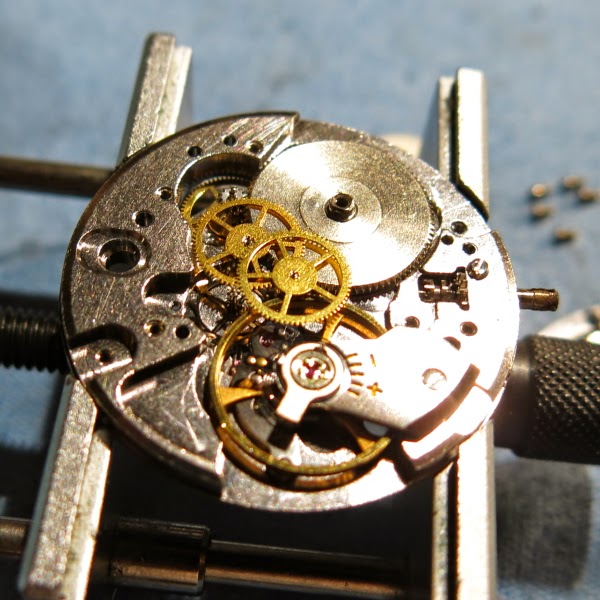 I like to take out the balance wheel after all the other larger parts come out.  It's more delicate than the other wheels and great care should be taken when handling it.  Just one screw holds the balance cock on - and then it can lift directly off as one assembly. 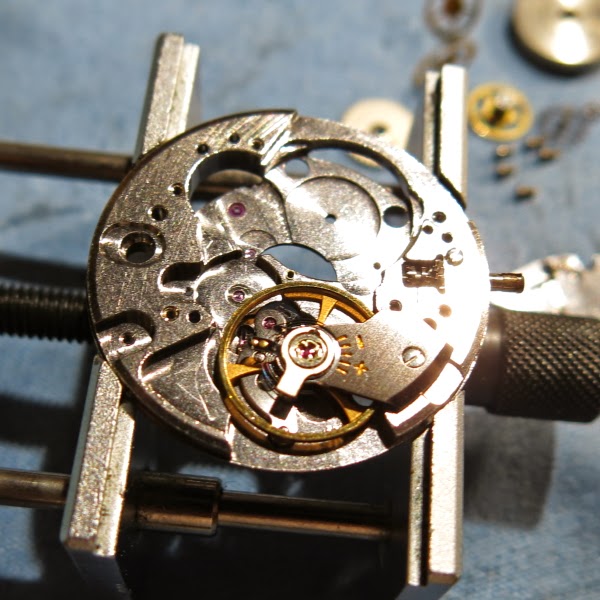 The only thing left on the back now is the pallet fork.  It rations the power coming through the escape wheel one tick at a time and drives the balance wheel back and forth.  One screw holds it's bridge in place. 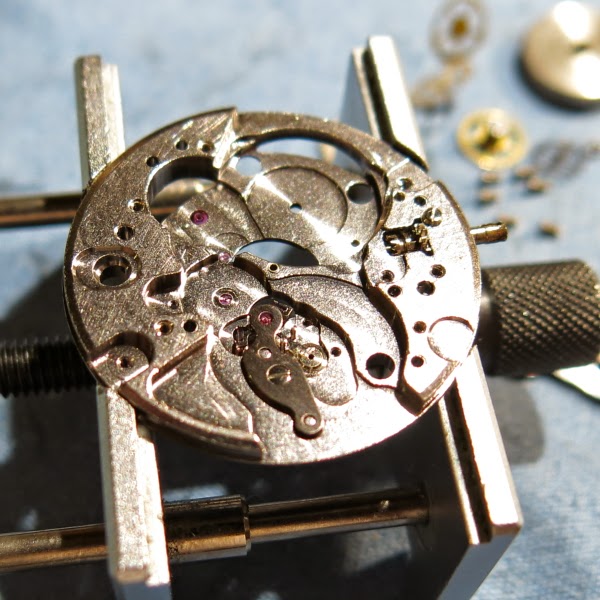 Now the main plate is clear of parts and can go into the cleaning solution where it will soak in the ultrasonic for 480 seconds.  Then two rinse cycles for similar time periods. 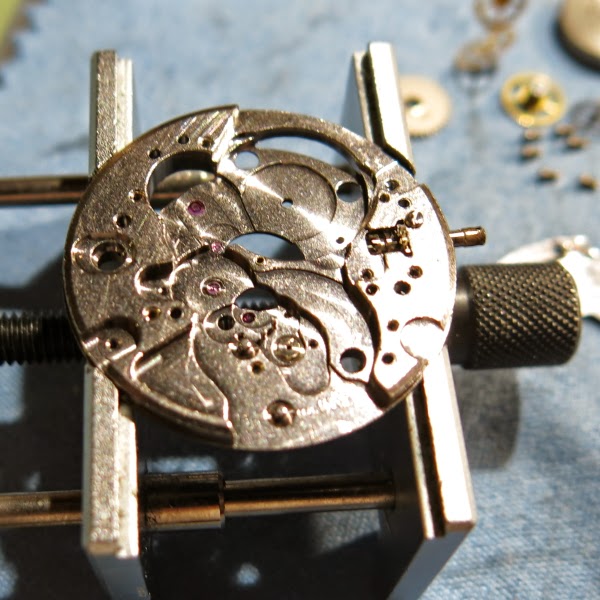 Everything is cleaned and dried before being reassembled with fresh lubricant. 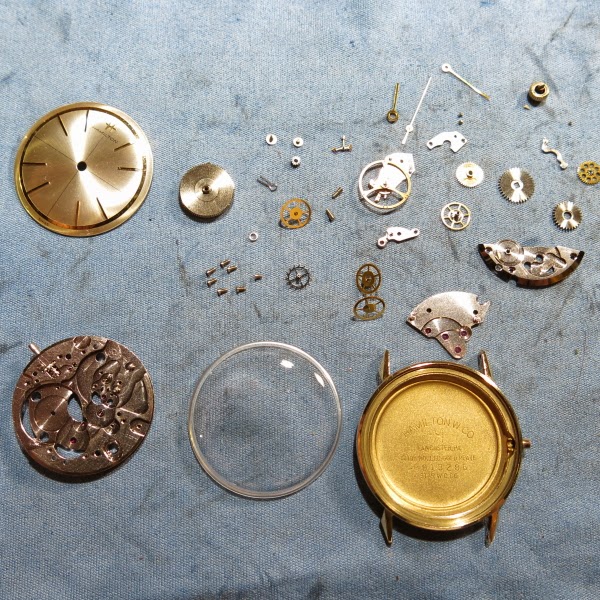 Putting it back together is basically the reverse of the above - the exceptions being I put the pallet fork in after assembling the gear train (it's easier to fiddle with the wheels when the pallet fork is out of the way) and I always put the balance wheel on last.

In the shot below, everything is back in it's place the watch is purring away. 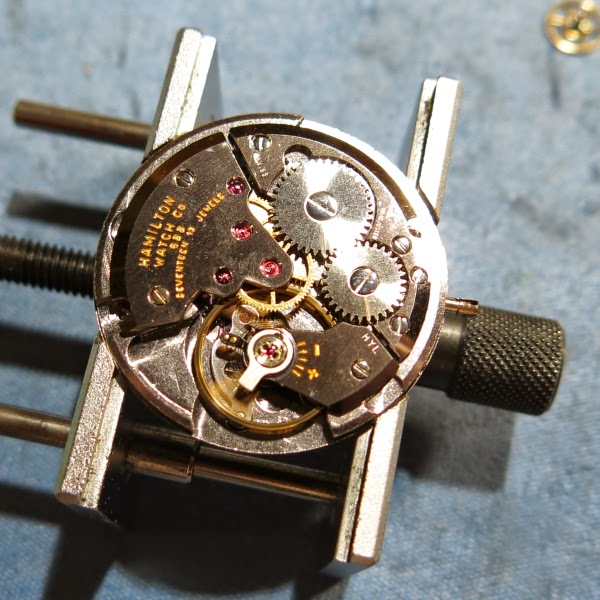 Back on the timer, the watch is running fine now.  Under most other circumstances I would call it a day.  However, I can easily adjust the beat error on this watch so I will tweak it so it's even better. 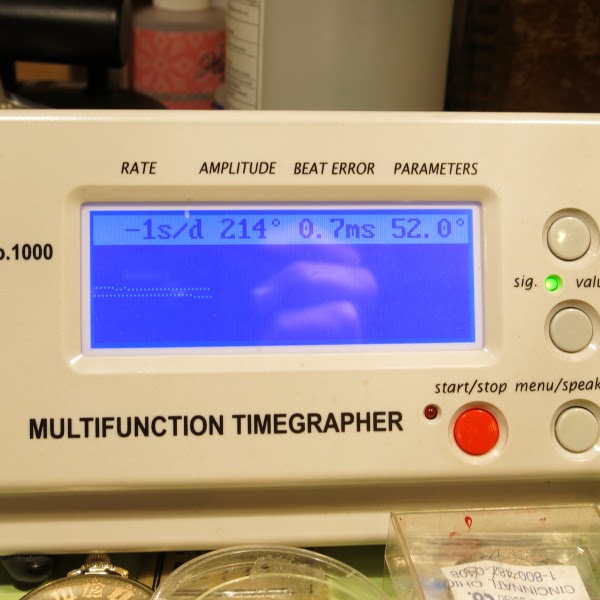 The distance between the two lines represents the beat error.  The beat error is how much the balance swings to one side relative to the other side.  If the impulse jewel on the balance is perfectly centered with the pallet fork the error will be zero.  You can see below that I initially made it worse by moving the location of the hairspring stud the wrong direction.  Then I moved it back until the lines got closer and closer together. 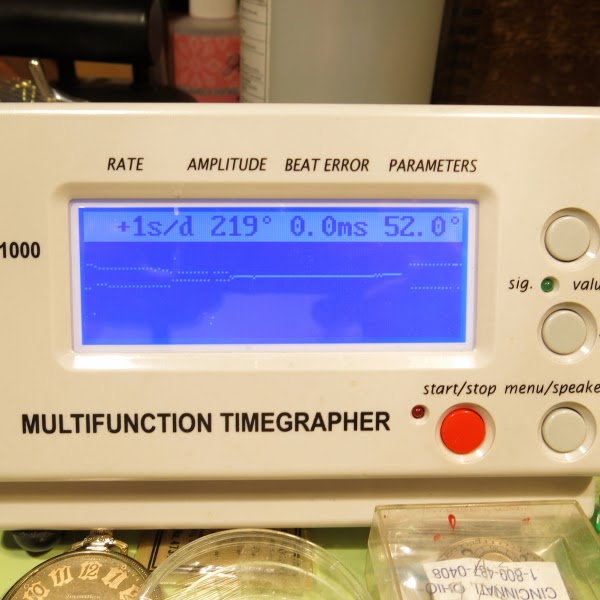 The dial and hands go on next.  First I put the dial on, then the movement goes back in the case so I can use the crown to set the time.  The hour hand goes on first, I point it to 12 and then put the minute hand on so the time is 12:00 - that ensures the hands are synchronized.  The second hand goes on last and then I put the crystal back in place. 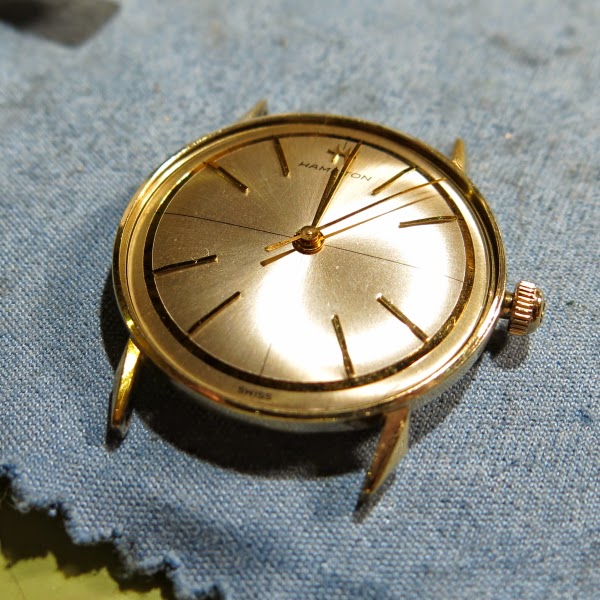 Here's the finished project with a new black lizard strap.  I like to match the strap on a dress watch to the color of my shoes (and belt) so I normally choose black or brown colors.  This watch turned out great and I love the details on the radial finished dial. 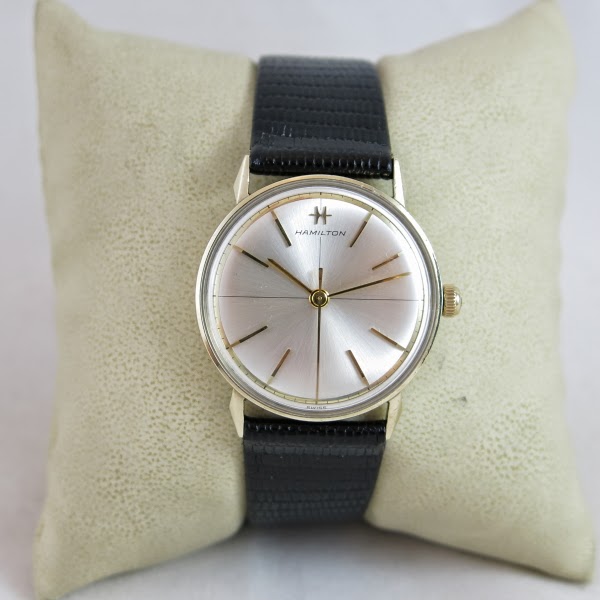 The Sea Baron is a sharp-looking watch.  It's medium sized, not too big and not too small.  Well, maybe a little small for a man by today's standards but it would be a great option for "Tony" to give to "Laura" today.
Posted by HandyDan at 11:54 AM