Hamilton made a handful of watches in platinum, but the second most-precious metal cased models came in 18K solid gold in white and yellow.  Only 13 models were made in 18K.

One of them is the 1954 Kevin.  It was produced for 4 years as part of the "Masterpiece" line. 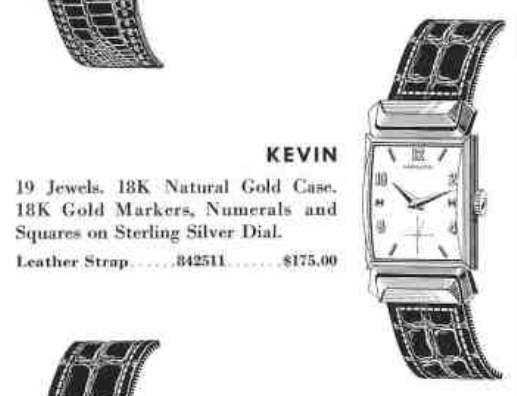 In 1956 the Masterpiece line received a solid gold diamond-shaped marker on the dial under the Hamilton name.  So if you see a Kevin with this marker, you know it is from 1956 or 1957. 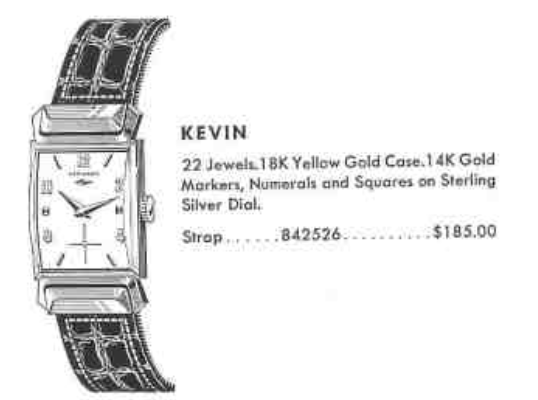 One of the most remarkable features of the Kevin is it has swing lugs.  The metallic portion in between what appears to be the lugs is actually a hinged portion of the case that the strap attaches too.  You might think that was a part of the strap but it's actually part of the case.

I recently received a project Kevin in serious need of some TLC.   It arrived very dirty, non-running and beat up. 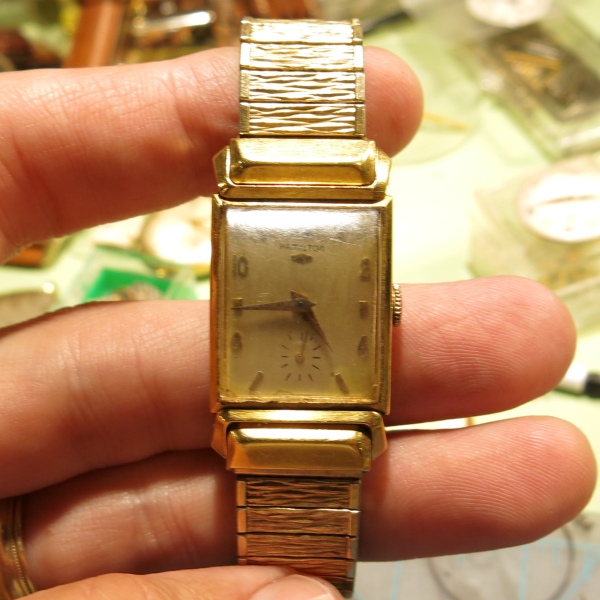 The back is inscribed with a presentation from 1957.  You can see the hinge structure for the case in the photo below. 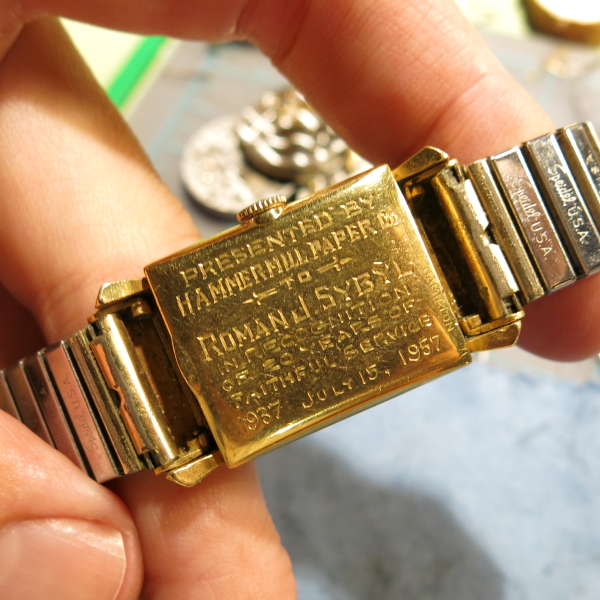 This dial is an obvious refinish from long ago.  It's got some water damage around the perimeter and the hands have lost a lot of their gild.  Notice the seconds register is incorrect.  It should be a simple cross hair pattern.  The font for Hamilton isn't quite correct either, but it's closer than the seconds register anyway. 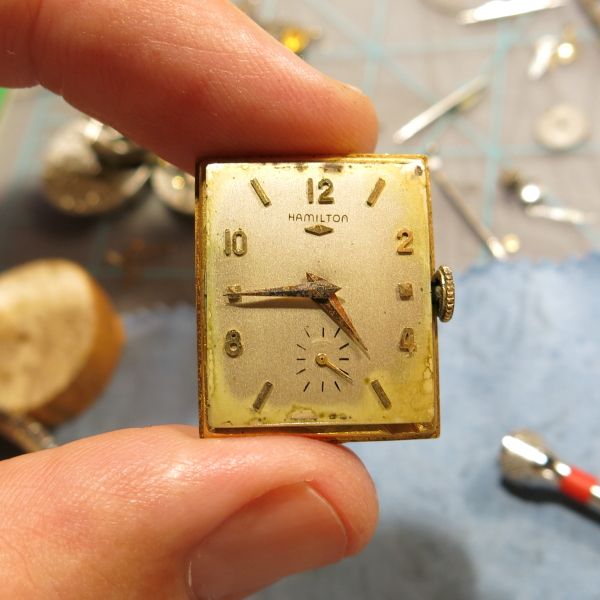 It's not often you come across a watch with 18K stamped inside the case back. 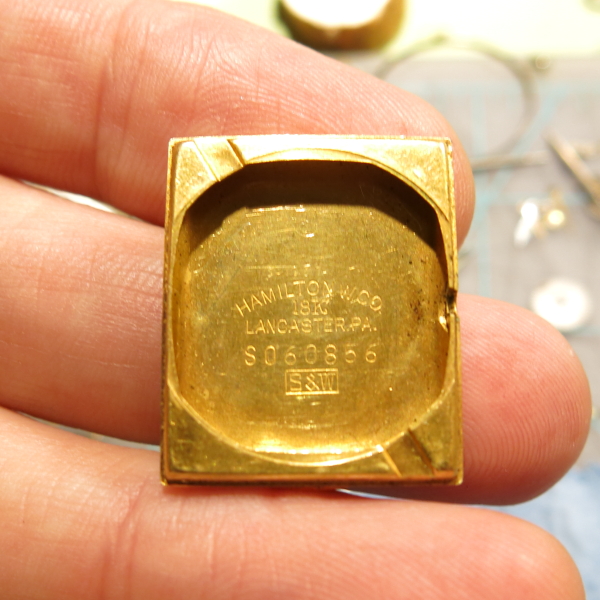 The 22 jewel 770 is very dirty.  It will tick slightly but it won't run for long.  The stem won't stay in either, so you can't set the time. 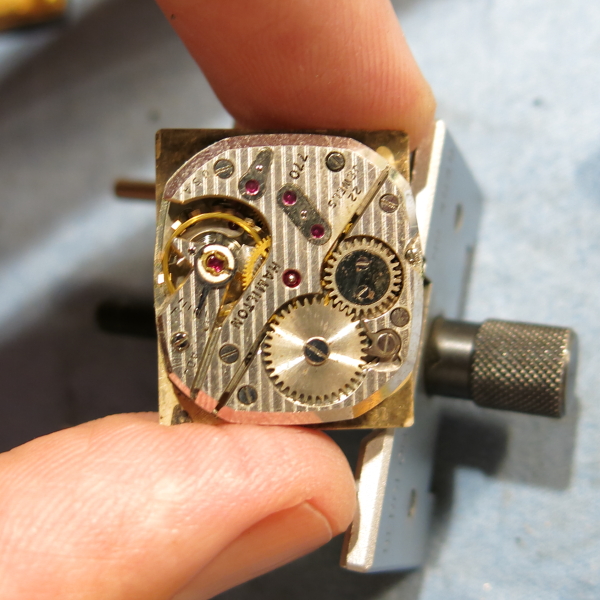 With the dial out of the way, you can see the set lever, indicated by my tweezers, is a rusty mess.  There's a little post on it that engages the stem so I assume that it has rusted away - so the stem won't stay in.  There's also a screw missing from the "set bridge" in the shadow of my tweezers. 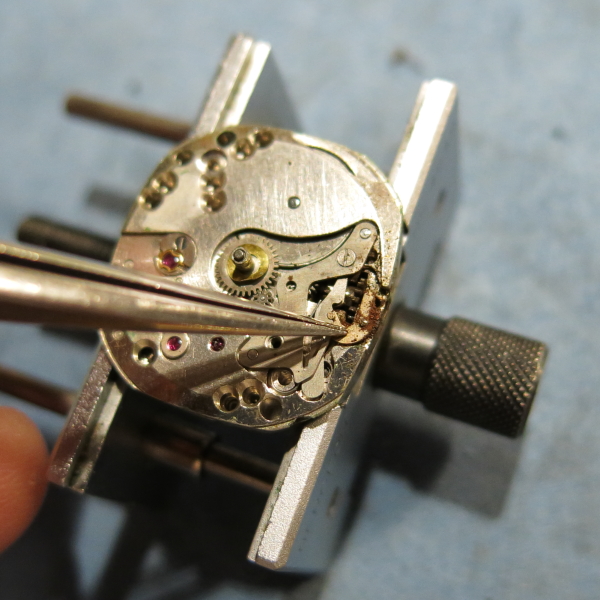 Flipping the movement over, I noticed two of the bridge screws are incorrect replacements.  One is located on the balance cock, the other is up by where the train bridge says "22 jewels".  Apparently this watch was last serviced (long ago) by someone who was really good a losing screws. 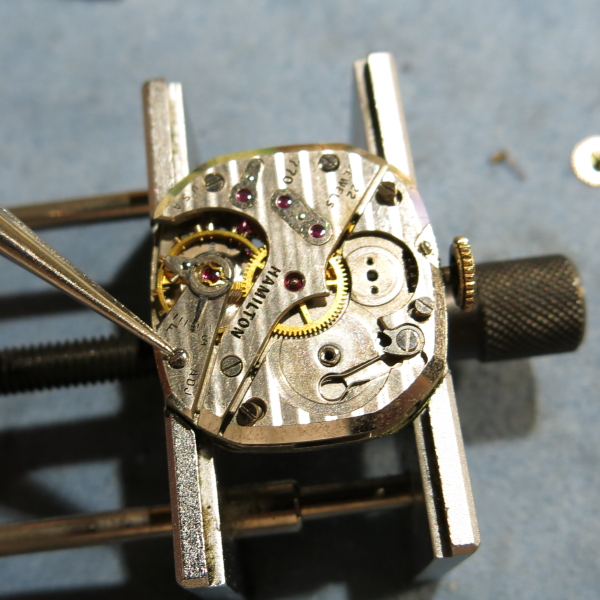 With the parts removed from the back, I'll flip it over again to remove the cap jewels.  At this point I noticed the shock jewel spring is broken on the balance jewel.  So that will need to be replaced. 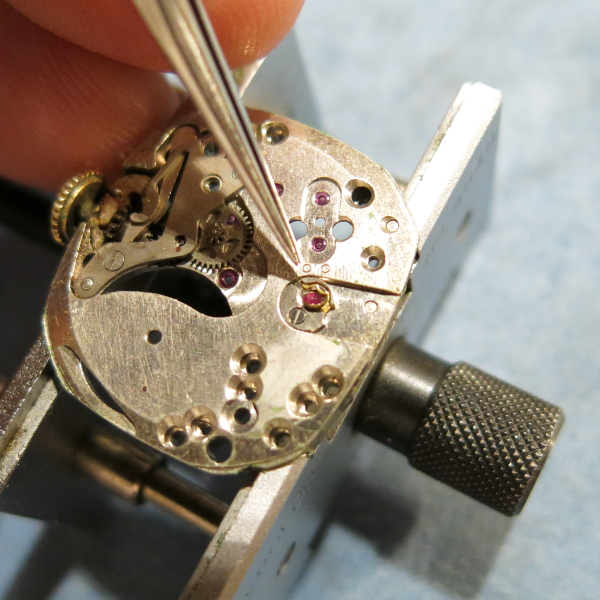 The balance jewel is actually a replaceable assembly held in place with a tiny screw. 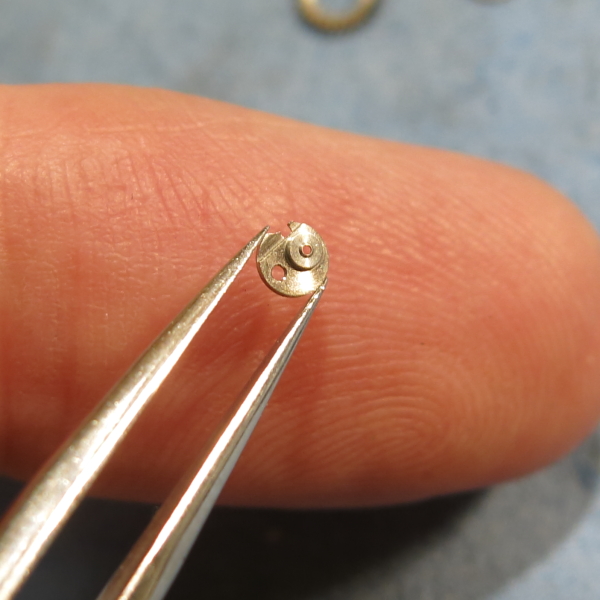 Now it's been removed and you can see it's empty hole.  Now I'll remove all the rusted setting parts. 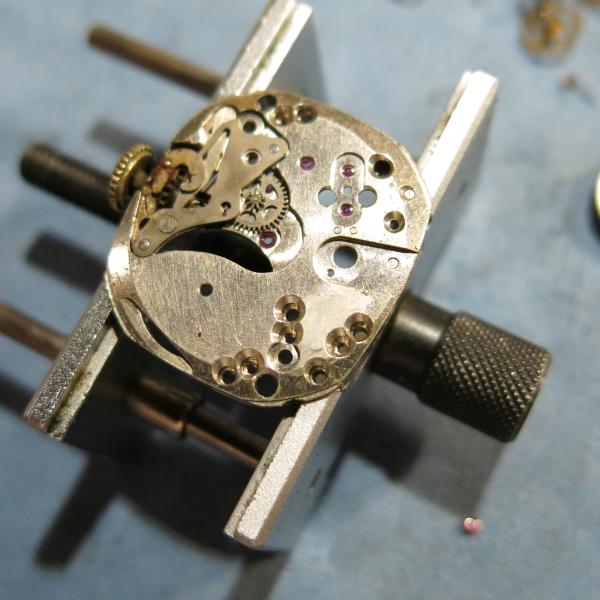 Everything is cleaned and dried.  The mainspring doesn't look very good to me - it's not quite set but it's not splaying out like it should.  So I'll replace that now too. 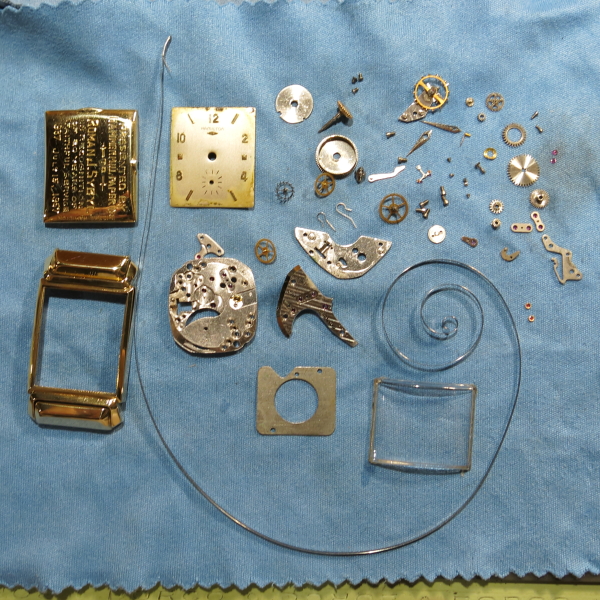 I like to use genuine Dynavar white alloy mainsprings whenever possible. 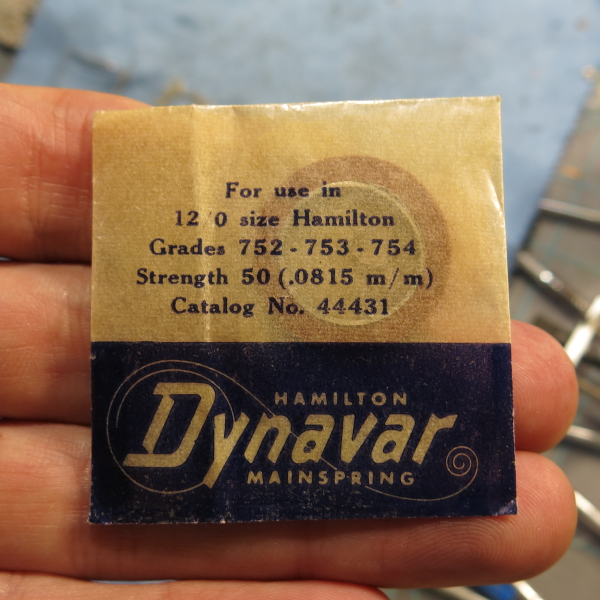 Here's what a proper mainspring will look like.  Notice how it actually splays out in the opposite direction.  There's a huge amount of difference between a fresh and a set mainspring in terms of stored energy. 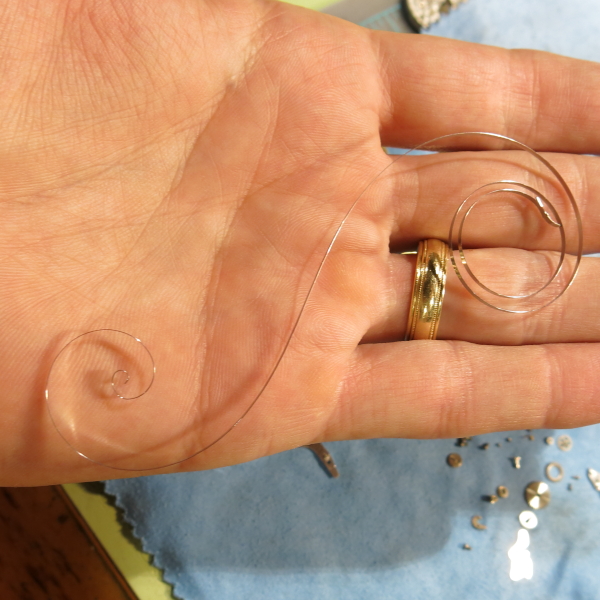 Here's the difference between a rusty set lever and a nice set lever.  Notice the post that engages the stem. 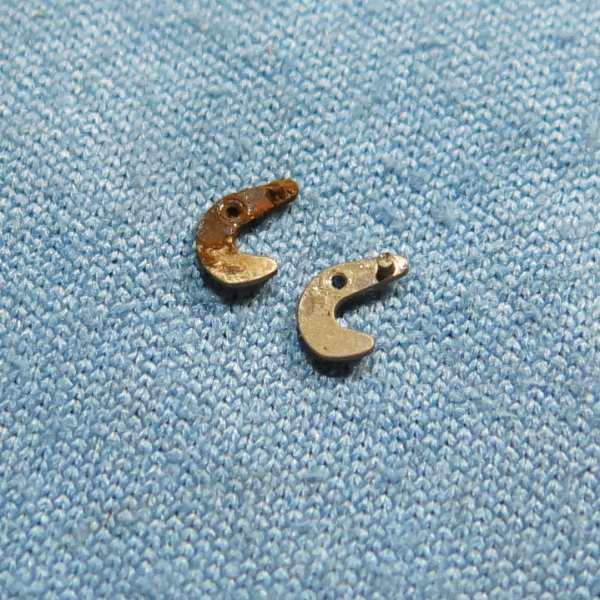 Well, it took a couple of hours to get everything cleaned and reassembled.  Now I just need to reinstall the balance assembly. 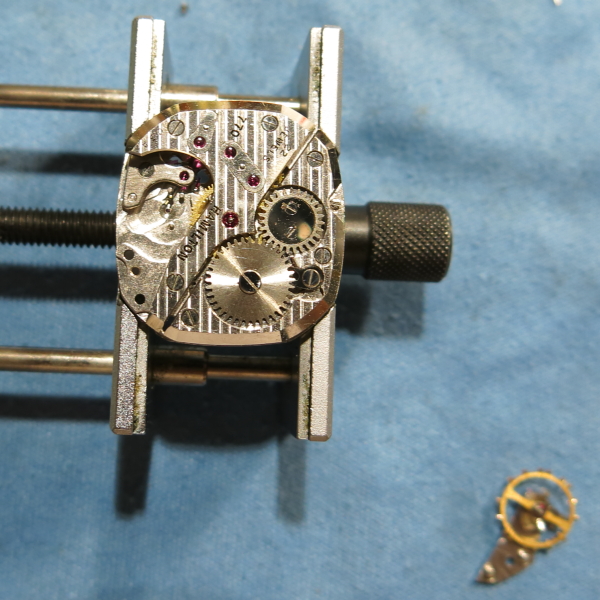 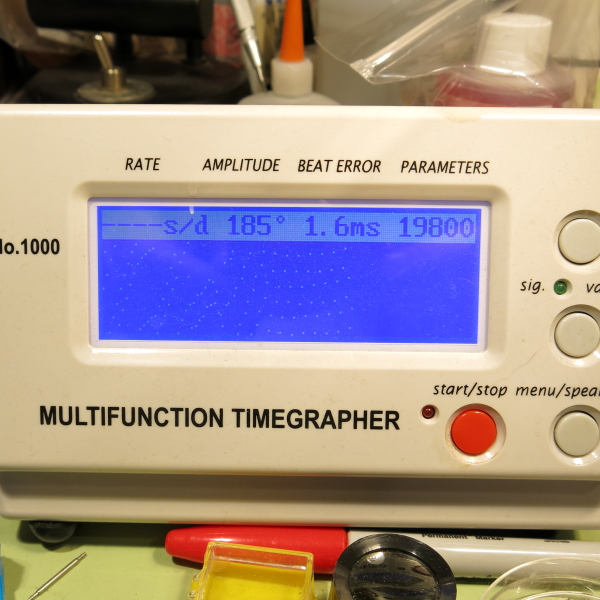 A pass through my demagnetizer sets it straight.  Now I just need to tweak the regulator a little to speed it up.  The amplitude is a little low, but anything over 200 is fine.  I haven't wound it fully yet though since I haven't installed the stem. 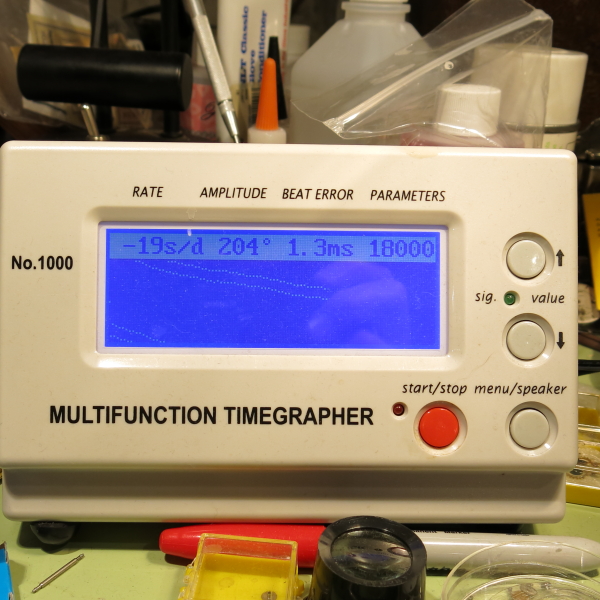 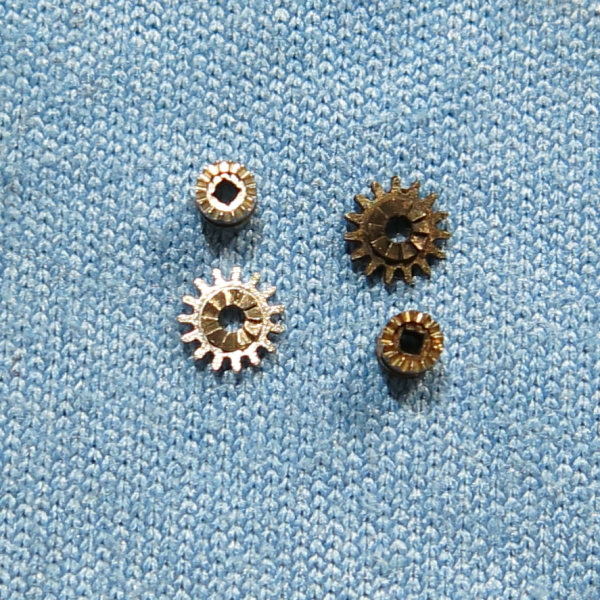 With the stem and setting parts back in place, I need to put the dial spacer back on.  This is always fun since I can never remember which side is up, down, etc.  I remembered this time that the small hole next to the big hole is for the second hand. 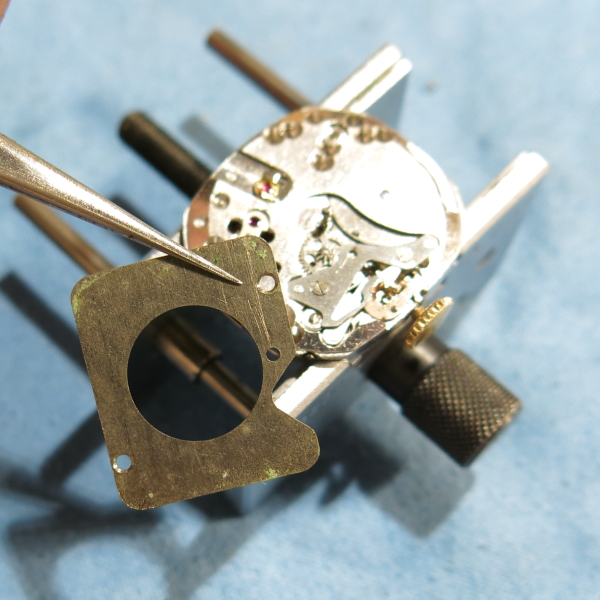 There, that's where the spacer goes.  The hour wheel is back on in the center, along with a golden dial washer.  So all that's left is the dial and hands. 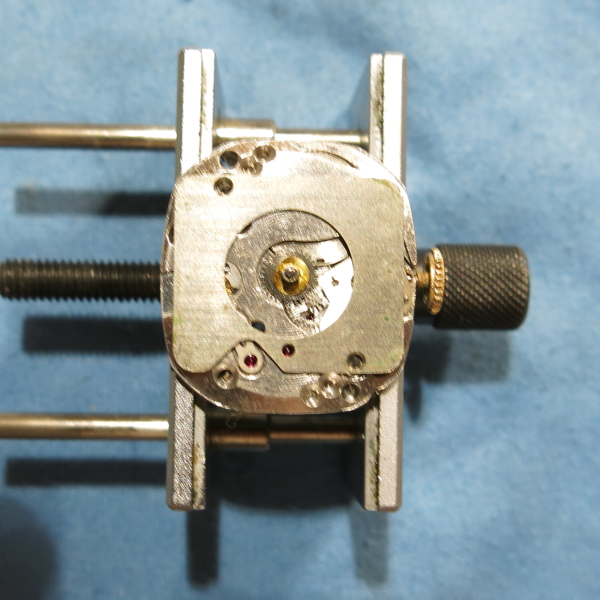 How's this for an improvement?  I put a genuine turtle strap on (try finding one of those).  I polished the plastic crystal so now it's clear but I'll replace that with a proper glass one.  The dial looks "okay" but I think a refinish is in order and that's a good opportunity to get the hands re-gilded too.  Pretty nice save though, if I do say so myself. 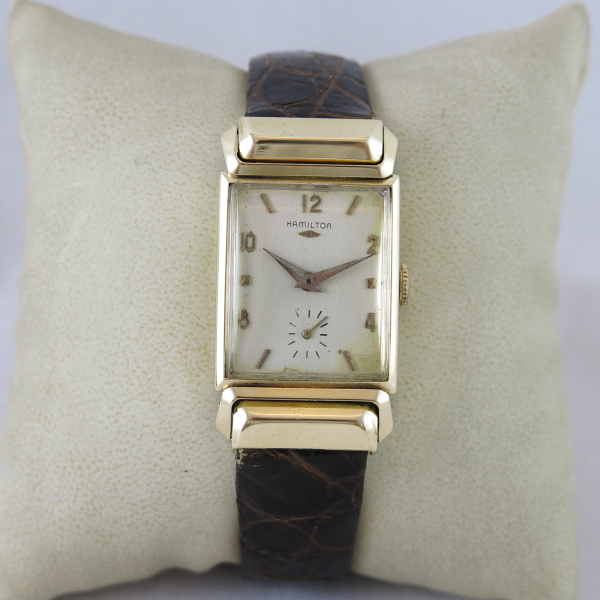 A watch this nice really deserves a full restoration so I got the dial refinished.  The new dial along with a new glass crystal really makes this watch pop now. 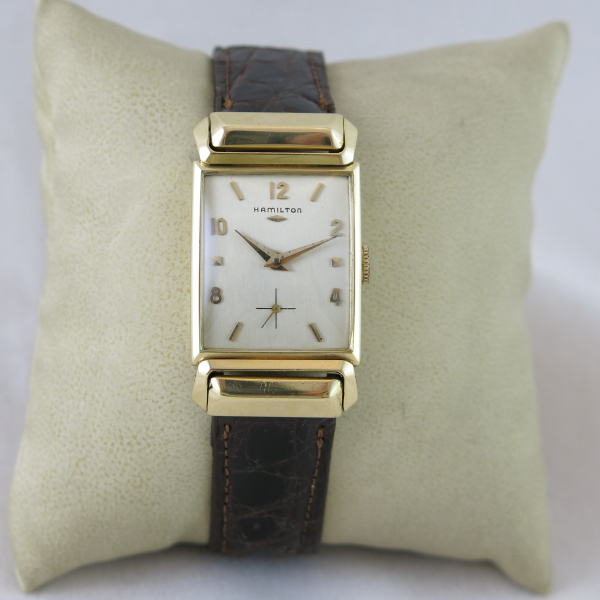