Of course, it was possible to put a round movement in a square case and there are plenty of square models to choose from.  There aren't that many with a sweep second hand though.  One of them is the 1959 Sea-Mate. 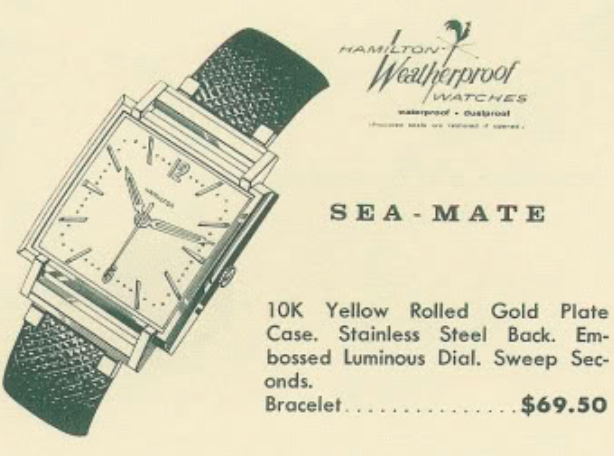 The Sea-Mate was produced through 1961 and came on a strap or a bracelet.  The bracelet is shown in the catalog image - although I'm not really sure what it truly looks like.

Inside the 10K rolled gold plated case with stainless steel back is a Swiss-made Hamilton 671 movement made by ETA.  The case on the Sea-Mate is oddly constructed in order to be "waterproof".   Although the back snaps onto the front, the movement still uses a two-piece stem - almost like the set up you see on the CLD models from earlier in the 1950's.

You don't tend to see Sea-Mates very often.  I don't know if I'd say the model was rare - after all, it was one of the least expensive models of the era.  Maybe it wasn't very popular?

I recently purchased a Sea-Mate mainly because I'd never seen one before.  It wasn't in particularly good shape and the hands were obvious replacements as they are the wrong style and they are a little too small as well. 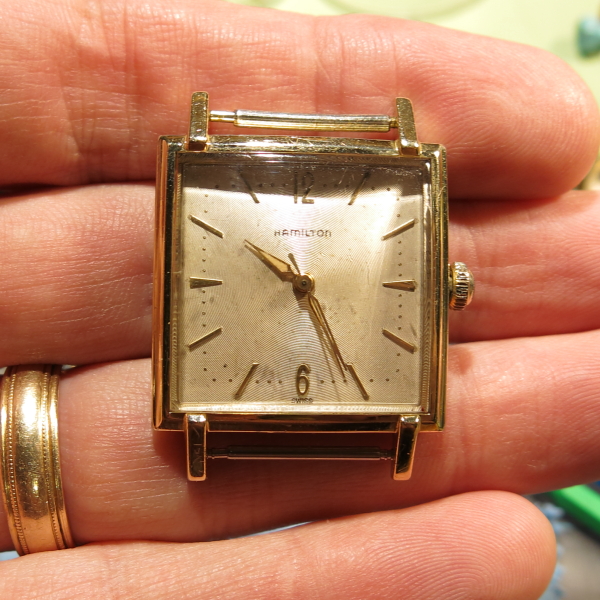 The crystal in the Sea Mate is very odd.  There is no ledge in the bezel for a conventional crystal.  Instead, the crystal has a ledge around all four sides so it passes through the bezel from behind and rests, presumably, on the dial.  I suspect there should be a gasket involved somewhere, this is a "water proof" watch after all, but there wasn't one inside this watch. 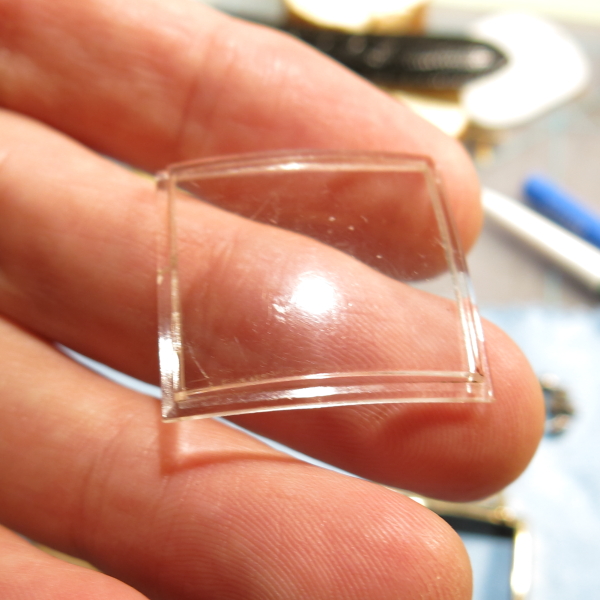 The crystal has a small crack in it and a few scratches that won't polish out.  So I'll need to purchase a replacement.  Fortunately, a quick perusal through the GS catalog reveals the Sea-Mate takes a CMS 980. 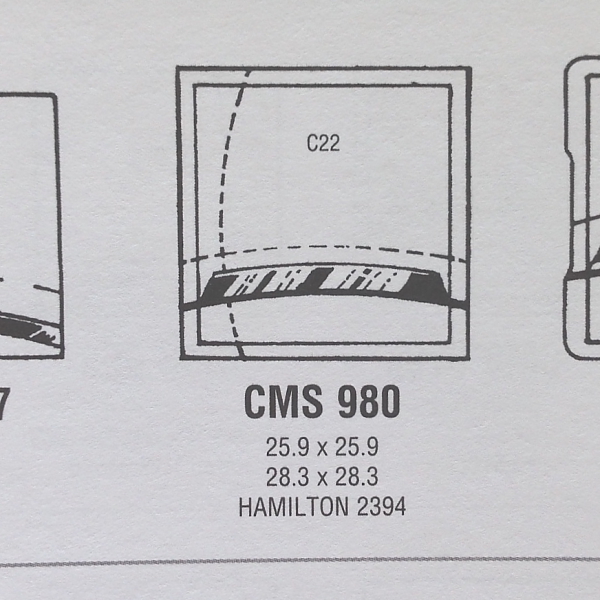 The dial and movement fit securely in the stainless steel back.  So I need to located the gap in the female side of the stem so I can swing the movement out.  You can see in the shot below that the embossed dial has a circular texture pattern along with the markers and pearled track.  This would be a tricky dial to get redone correctly, I bet. 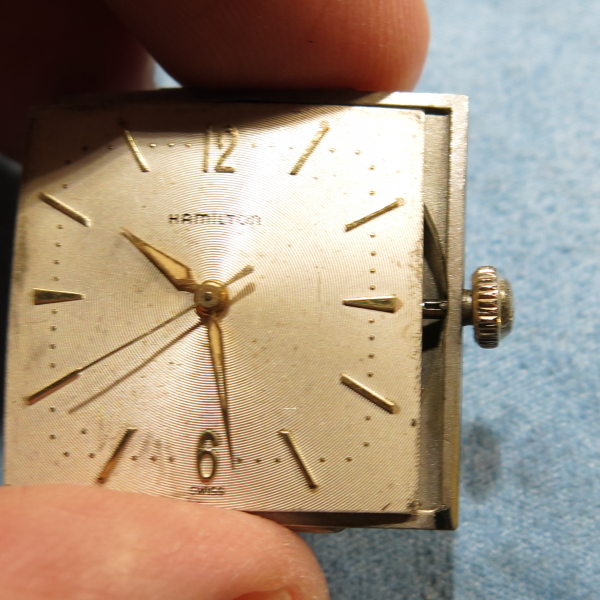 The 671 movement is very similar to the ETA automatics from the same period, just without the automatic parts.  It fact, it shares a lot of parts with the ETA 679, etc. 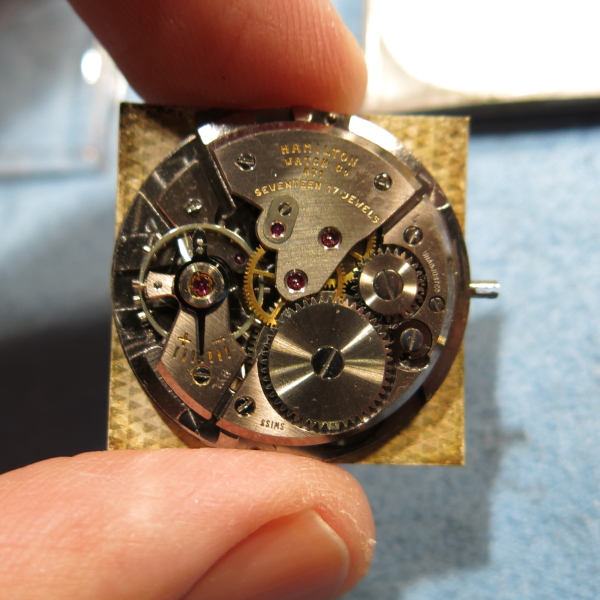 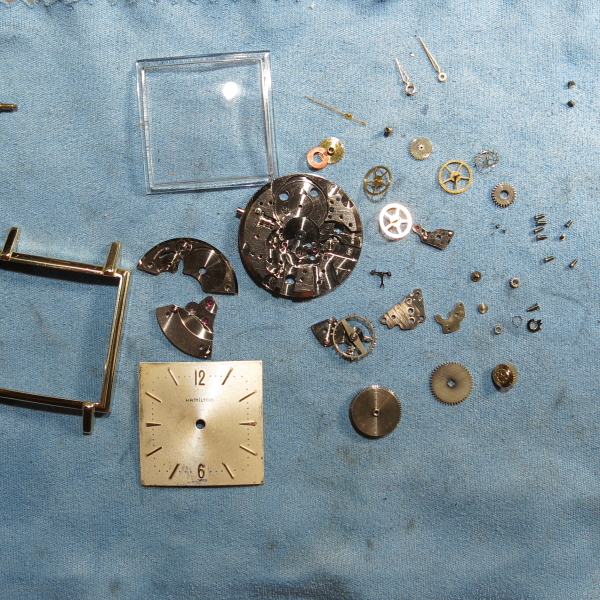 The running movement has good motion so it's off to the timer to see for sure how it's performing. 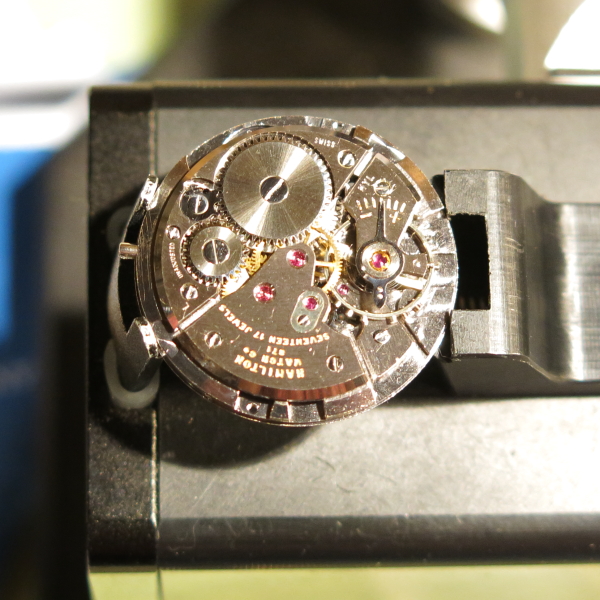 A little fast but that's pretty much where I like to see them when they're reassembled.  I'll check it again after it runs for a while. 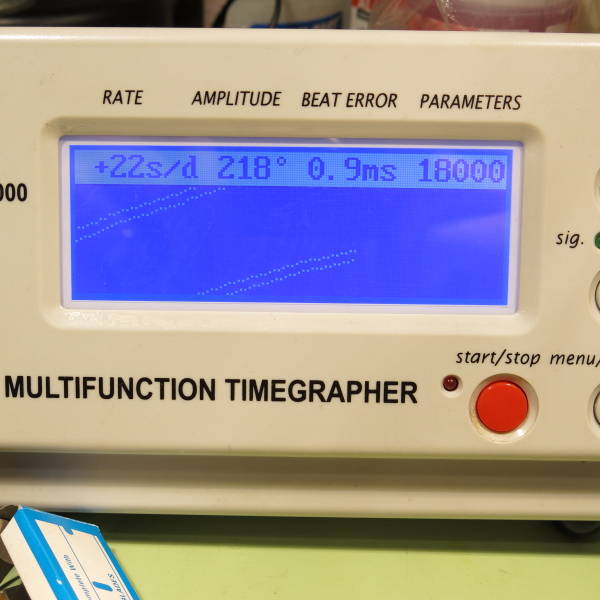 I happened to have the proper hands for the Sea-Mate so I installed them along with a better Hamilton waterproof crown.  The watch will look a little better once I put a new crystal on it but it's not too bad as is. 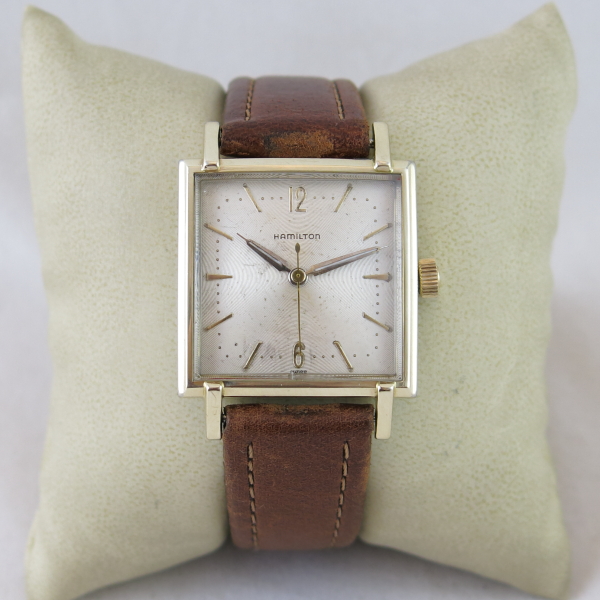