I know a lot of collectors whose favorite genre of watches is the 1930's.  Truth be told, it's probably my favorite decade as well... and why not?  A lot happened in the 1930s; the Elinvar hairspring was invented, the 14/0 sized movement was introduced, the 12/0 401 grade from the Illinois Watch Co. powered several highly collectible models, the 6/0 sized 987 movement evolved through the 987F,  987E and the 987A grades, the higher-end 19 jewel 979 movement was produced and the Art Deco era had a huge design influence on the models.

The 1930's was the golden age of Hamilton watches.

Another reason for popularity is there weren't as many models produced in the 1930's as in the later decades... of course, that doesn't mean they are easier to locate.  I suspect a lot of watches succumbed to economic forces like the Great Depression and WWII.  Cases wore out and household disasters struck. I'm sure a lot of watches have been lost to time.  So scarcity is another valid reason why collectors favor the 1930's.

At the top of the more highly prized 1930's models is the 1930 Coronado.  It's one of three models to feature an enamel bezel, the other two being the 1928 Piping Rock and the Spur. 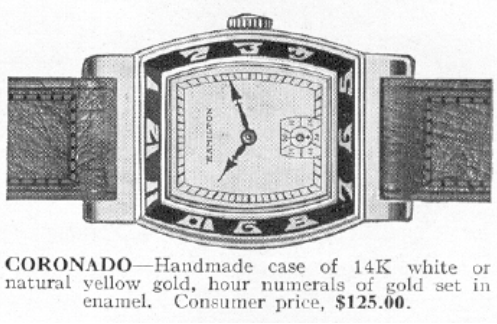 The name "Coronado" was a result of Hamilton's practice at the time of naming models after popular high-end resorts of the era.  The Piping Rock, Pinehurst and the Meadowbrook are other examples, as is the Oakmont, which was the site of the most recent USGA tournament.

The case of the Coronado is very similar in design to the Piping Rock.  It's a three-piece design with a snap on case back, a center section that holds the movement and a solid gold bezel that is filled with enamel.  The dial has no hour markers, as the numerals are integrated into the bezel.

Inside the case you will find the 6/0 sized 19 jewel 979F movement.  This higher-end grade was used mostly in solid gold models and is very similar to the 987 movement, but has two extra cap jewels.  It shares many, but not all, parts with the 987 grade.

I was recently able to purchase a Coronado.  It was a big swing for me but the opportunity for a Coronado project watch doesn't come along every day.  It was a bit of a risk as the seller's photos indicated the watch was in "as found" condition and I couldn't even tell if it was white or yellow.  As they say, "you pays your nickel and you takes your chance"... I was hopeful it would be worth it.

As received, the watch looked rather tired and well-used.  The lugs are supposed to be flexible but the upper lugs are a little more sloppy than the lower lugs.  The enamel in the bezel has a few missing chips but it looked decent enough 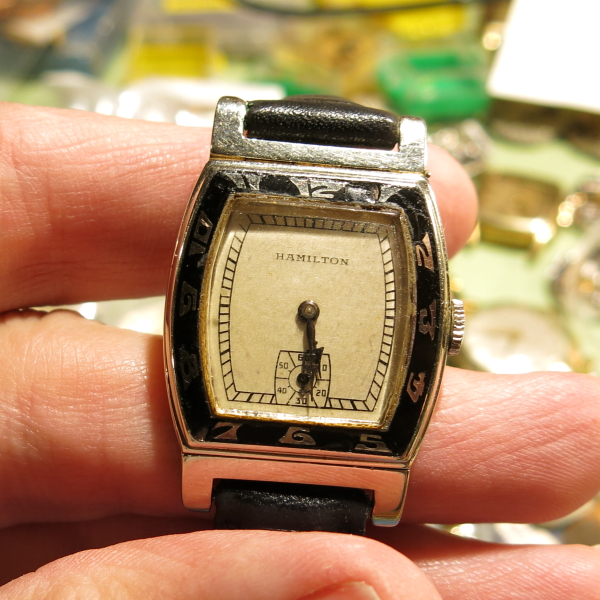 The back of the watch looks exactly like a Piping Rock.  Notice the open sections in the corners of the center section.  In the Piping Rock you can see right through to the other side but in the Coronado, the bezel covers the openings. 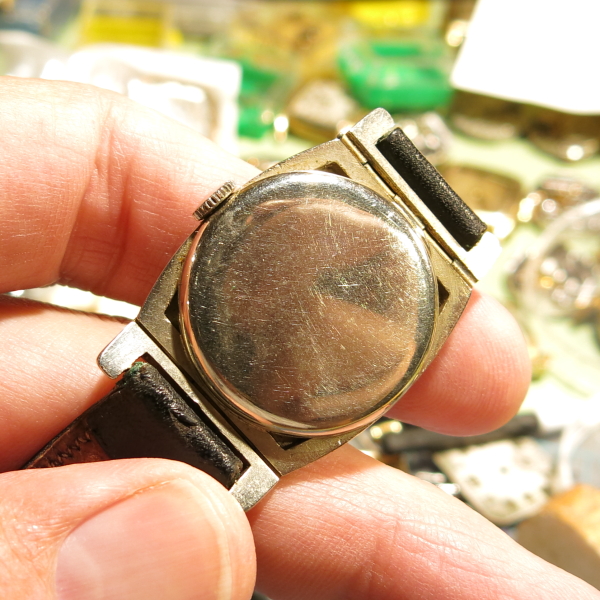 Looking at the movement, it's clear that it hasn't been to a watchmaker in a long, long time.  A few winds gets the balance to swing though - so that's a promising sign. 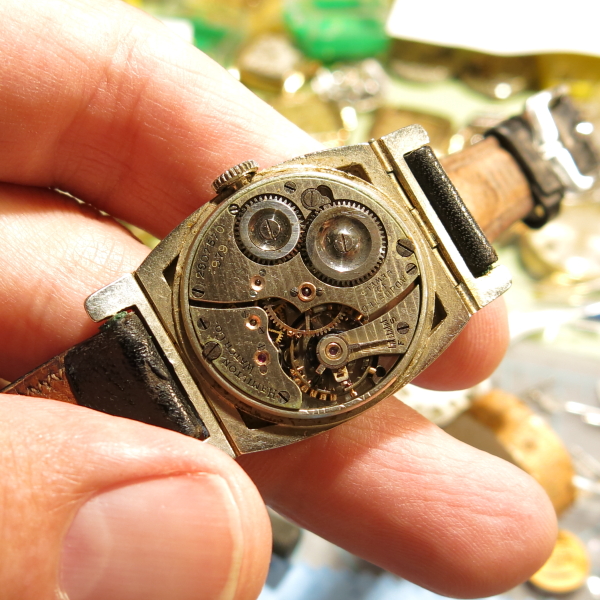 The movement comes out the front but you have to remove the bezel first.  Without the bezel in place, the dial looks awkwardly plain.  I can tell from the finish that the dial is likely a refinish.  It looks okay, but the printing is a little light in the upper left. 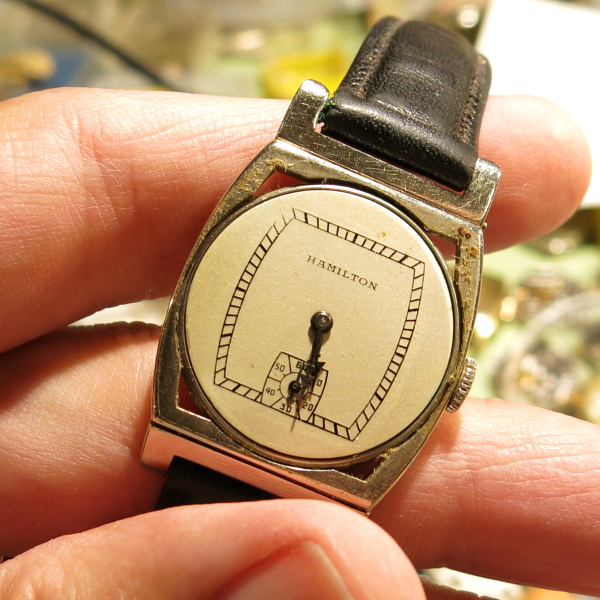 The inside of the case back is stamped with the usual early 1930's markings.  There are about a half dozen watchmaker's marks from past overhauls, so this watch was well maintained while it was in use. 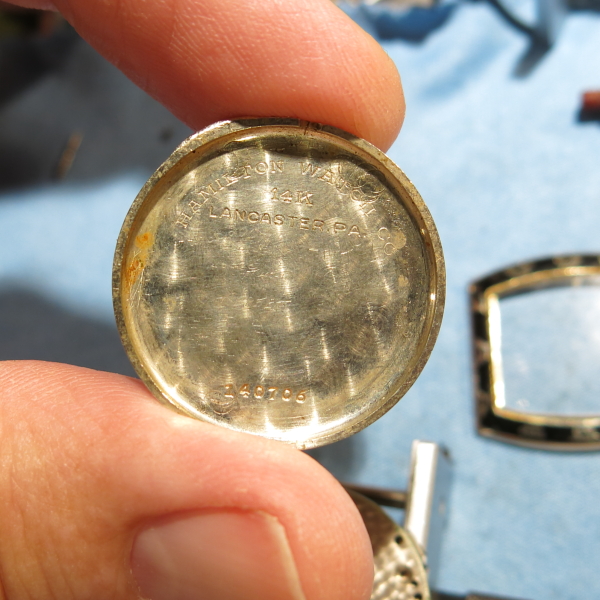 Sure enough, this dial has been redone at least twice, based on the two different sets of numbers scratched into the back. 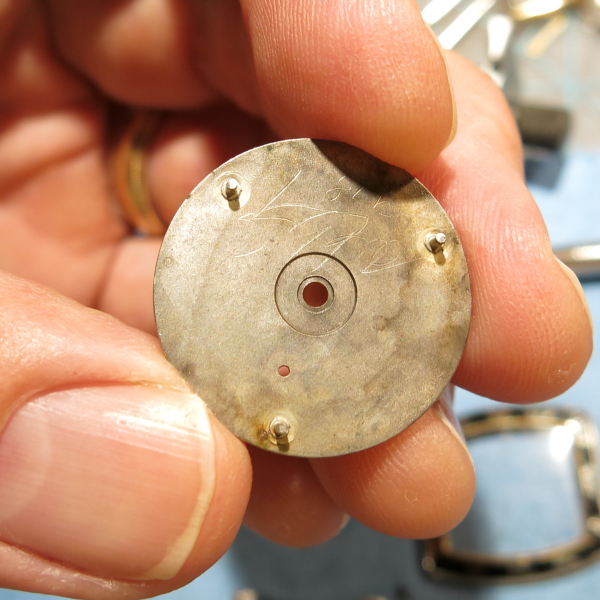 The 979 is essentially the same as a 987 when it comes to an overhaul.  These early 6/0 movements can be very temperamental and finicky.  I much prefer the more modern movements, as they typically present with much less wear and tear. 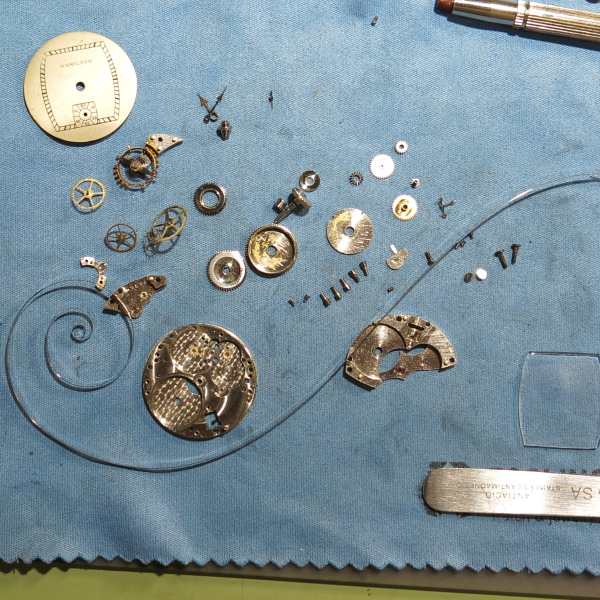 The movement is reassembled and ticking away.  It's off to the timer now to see how well it runs. 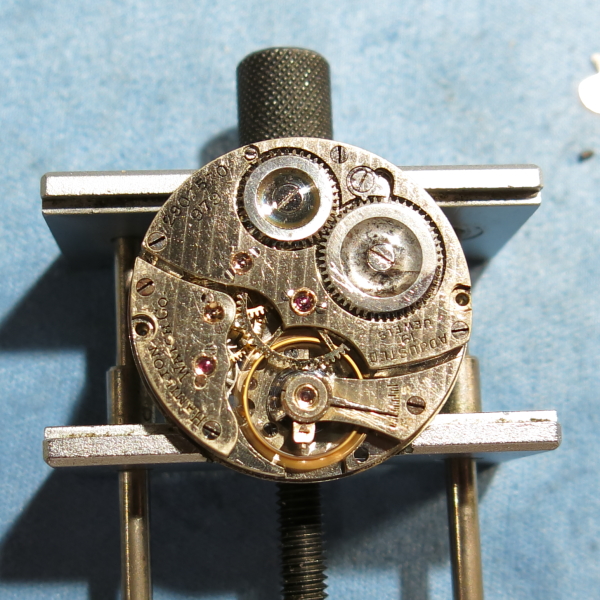 Things don't look too bad dial down.  It's running a little slow but otherwise looks fine.  Dial up was a different story though.  There was a LOT of noise and it ran much faster.

I decided it would be easier to swap balances with a 987F movement since the original balance had a bit of a wobble.  The replacement balance runs much better.  Even with the regulator at full slow, it runs a little fast and is consistent in dial up and dial down positions (and pendant down too).   I could use my dynamic poising skills and timing washers to slow it down, but I decided to leave it as is.  I have found that sometimes "good enough" is a great strategy when it comes to these early Hamilton movements.  Pursuing greatness can result in disaster. 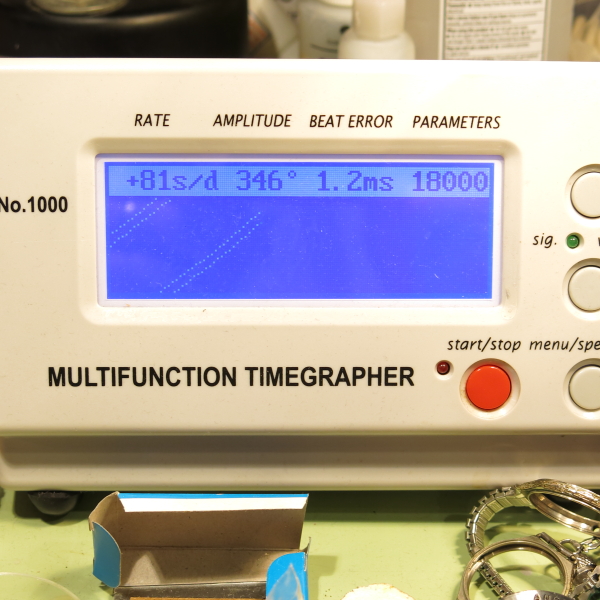 A lot of watches from the early 1930's require female spring bars.  Rather than having holes in the lugs, the lugs have posts that go into holes in the spring bar.  Getting replacement spring bars with holes large enough for the posts can be a real challenge but I have a small stash for just this purpose. 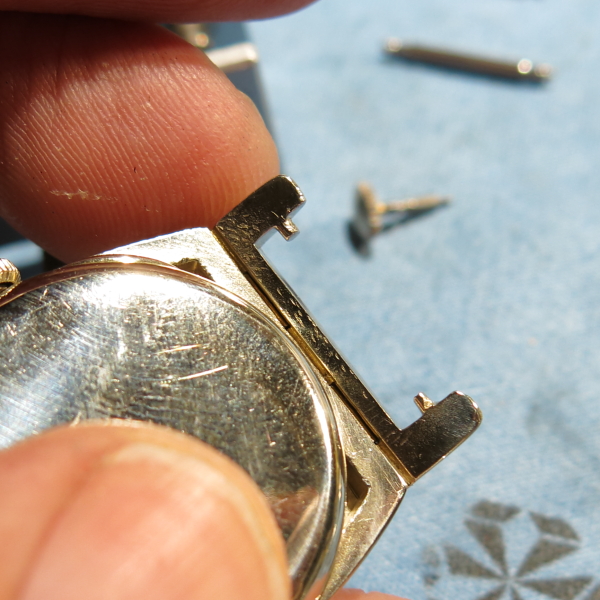 The "after" photos reveal what appears to be an entirely different watch.  I re-enameled the missing sections of the bezel.  The crystal is plastic and I was able to polish it nicely - it will do until I get a nicer glass one.  I also replaced the crown with a period-correct version so that looks better to my eye too. 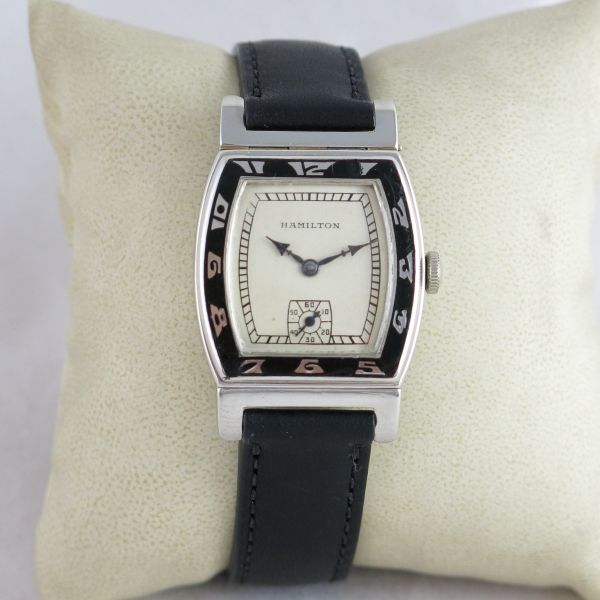 Part of the challenge with photographing the Coronado and Piping Rock is to get the numerals to shine.  Looking at them from an angle helps.  Here you can see a little of the irregularity of the black enamel around the number 7.  It's not perfect for sure, but it looks fine on the wrist. 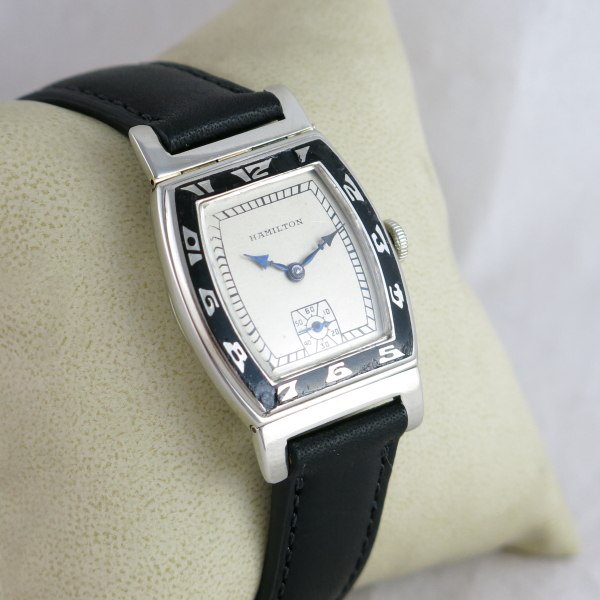 It looks just as sharp from the other side.  Notice the gap in the upper lugs is a little wider than the lower lugs.  A jeweler might be able to tighten them up but I'm not going to risk it. 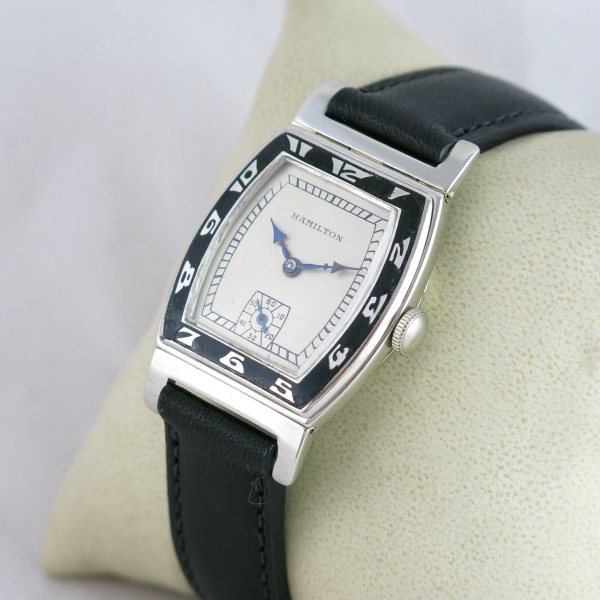 I even had a 5/8" Hamilton strap to install on it.  It's not a vintage strap but it looks great nonetheless. This Coronado is now the "pride of the fleet". 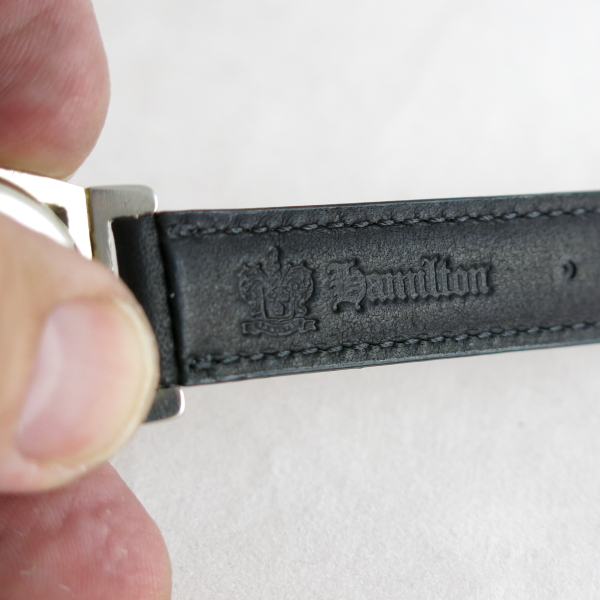