One thing I like about collecting vintage Hamiltons is when I get pitched a curve ball.  It doesn't happen too often but it's always a nice change of pace, especially after documenting over 700 different models!

What makes the A-652 interesting is I've found it numerous times without a stainless steel back.  Is it still an A-652 if its just a 10K RGP case?  I would say, yes.

Well, that's what my project watch appears to be.  It looks like a well-worn A-652 with a solid 14K case. 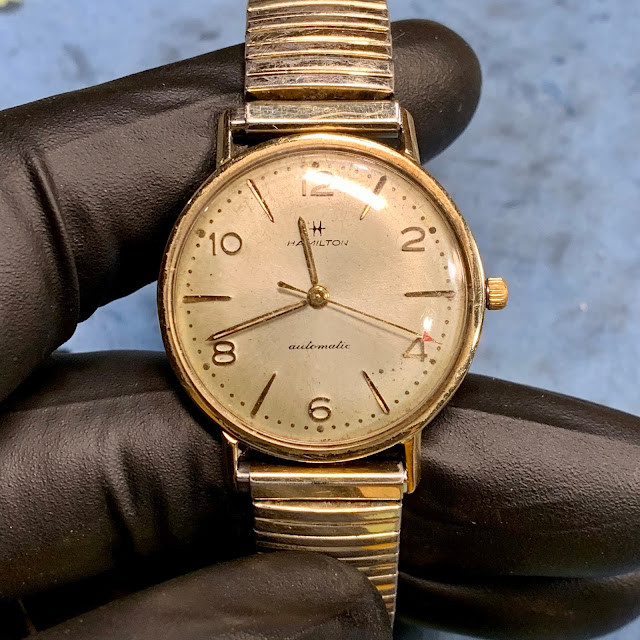 Here's an A-652 on it's original bracelet to compare it to.  In general the dial is the same.  The shape of the lugs is very similar but not exactly the same. 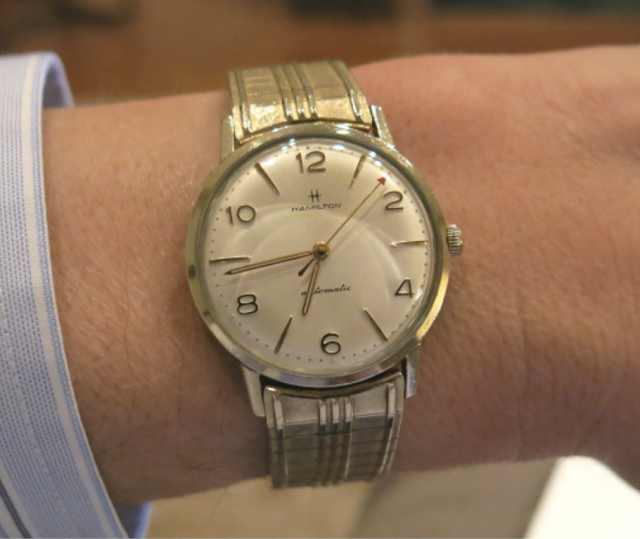 The back of the single-piece case is clearly marked Hamilton and 14K Gold.  D&A is the name of the case maker. 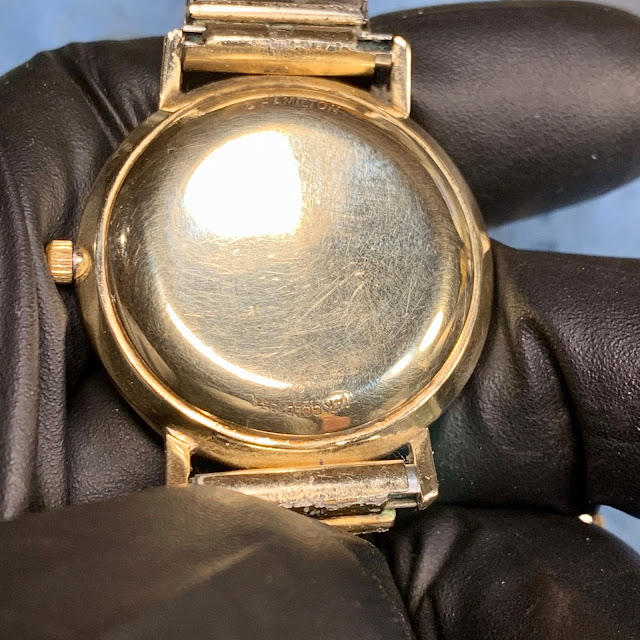 The first solid gold Accumatic came out in 1962 but only one, the A-200, was introduced.  The other few solid Accumatics weren't released until 1968.  Prior to 1968, Accumatics came mostly in stainless steel or 10K rolled gold plate.  There are only a handful of solid gold Accumatics and one of them is the 1968 Accumatic A-203.  The case on my project watch looks very similar to an A-203, don't you think?

The crown on my project watch is worn out and ready for replacement. 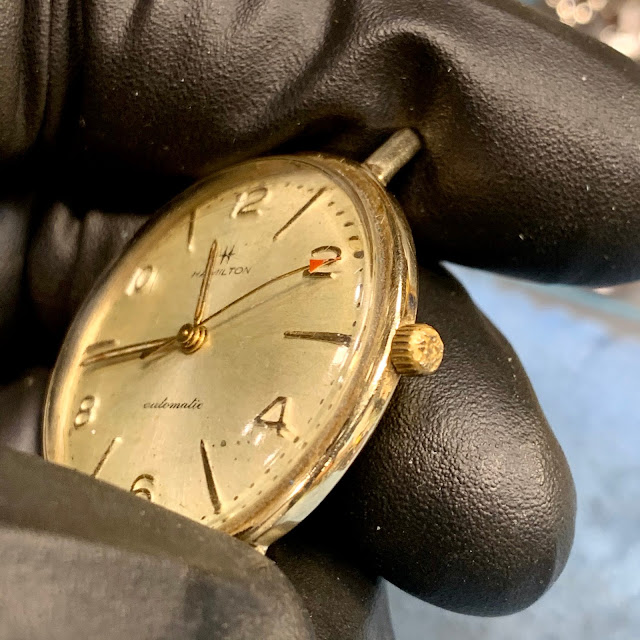 The seal on the crown has also separated so replacing the crown is definitely a good idea. 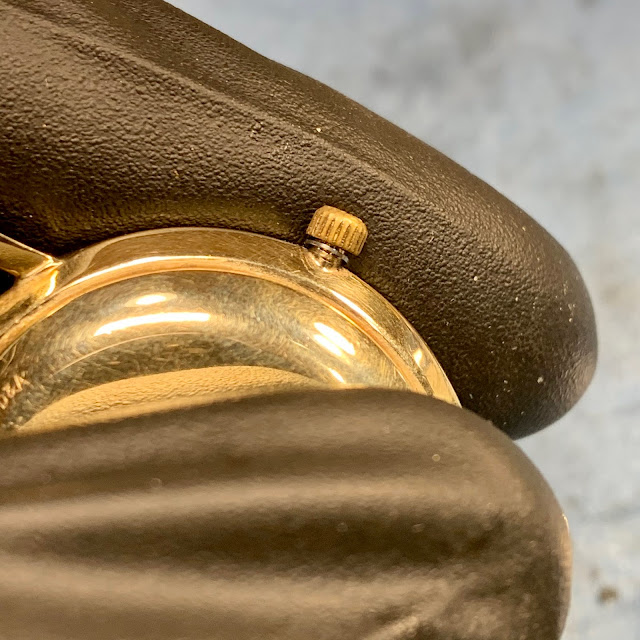 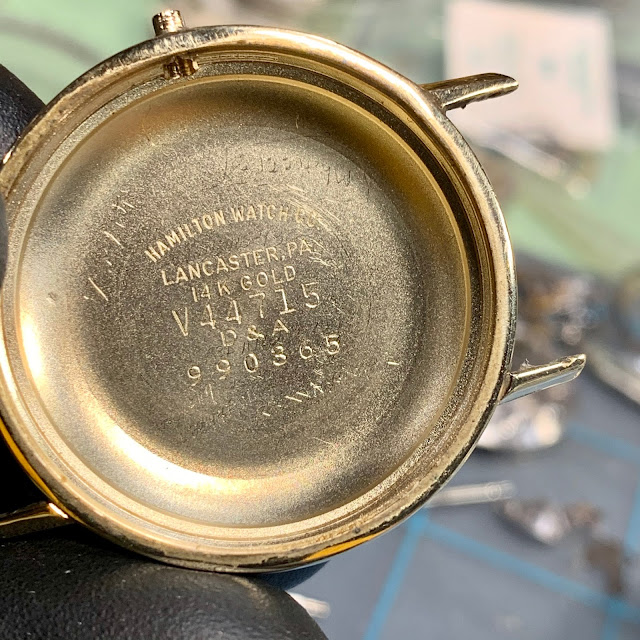 It's also possible it's an Awards Division watch or possibly an M-series model.

The Awards Division marketed Hamilton watches for presentation by companies and organizations.  They were separate models from the regular line.  The premise being that award recipients wouldn't find their "award" in their local jewelry store.  Often an Awards Division model will say "Masterpiece" on the dial.

M-series models are typically uncatalogued.  The conventional wisdom is they were models sold through a large retail chain.  The best way to identify an M-series model is they came in a red clam shell box like this 1963 M100-4. 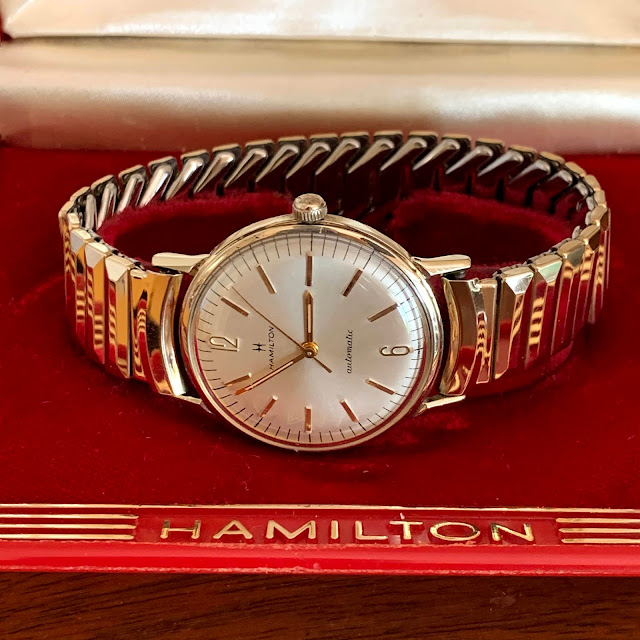 Of course, it's also possible that at some point over the past 50+ years the dial was changed.  Without original paperwork it's really difficult to say.

Inside the case is a 17 jewel 689A movement, the typical Accumatic caliber. 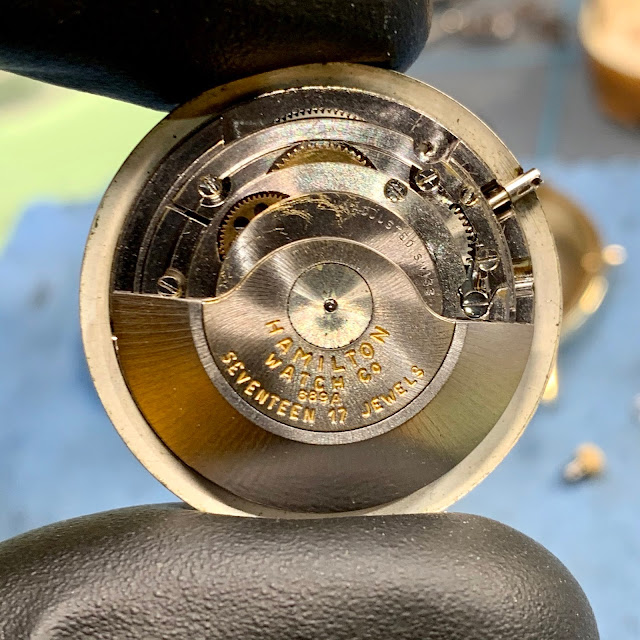 The finish on the dial is a bit crazed so I really don't want to try to clean it since there's a big probability I could lose the printing or make the dial look a lot worse. 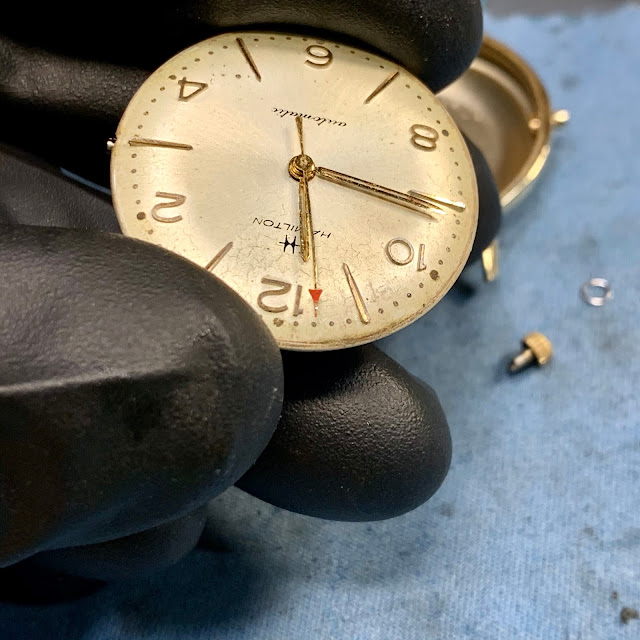 Everything gets taken apart and thoroughly cleaned. 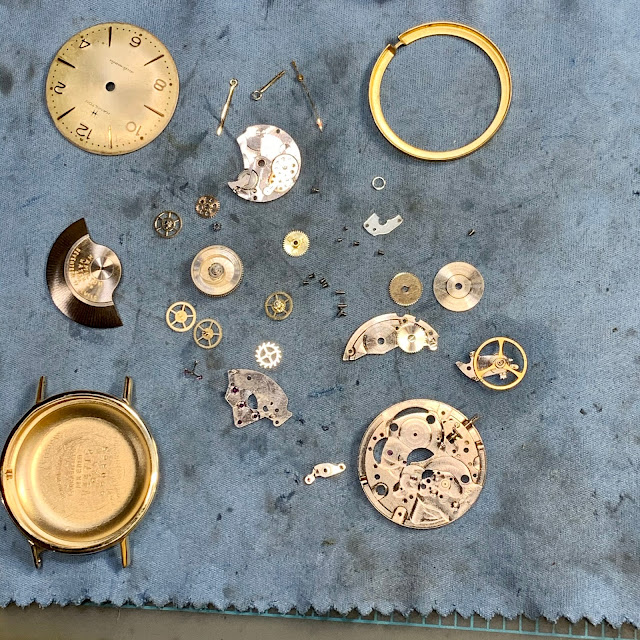 A new crown will make it much easier to wind by hand and less likely for moisture to sneak inside. 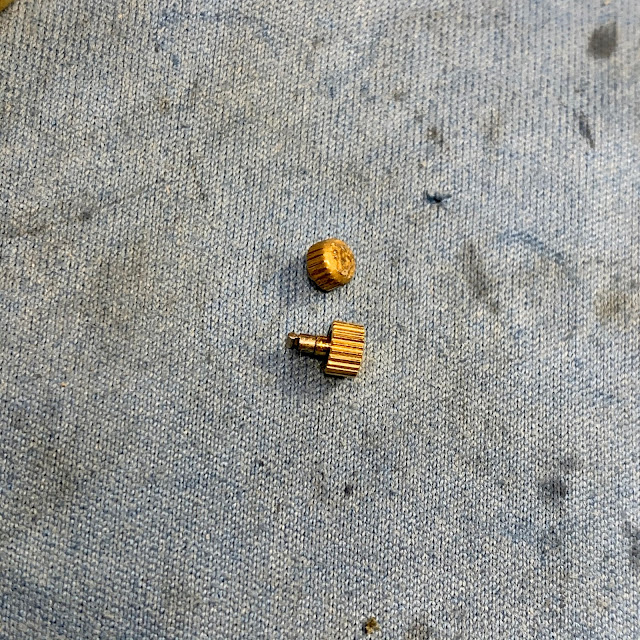 The escape wheel is missing a pivot and will need to be replaced.  It's hard to see in the photo but the pinion-end should have a pivot to ride in the jewel on the train bridge. 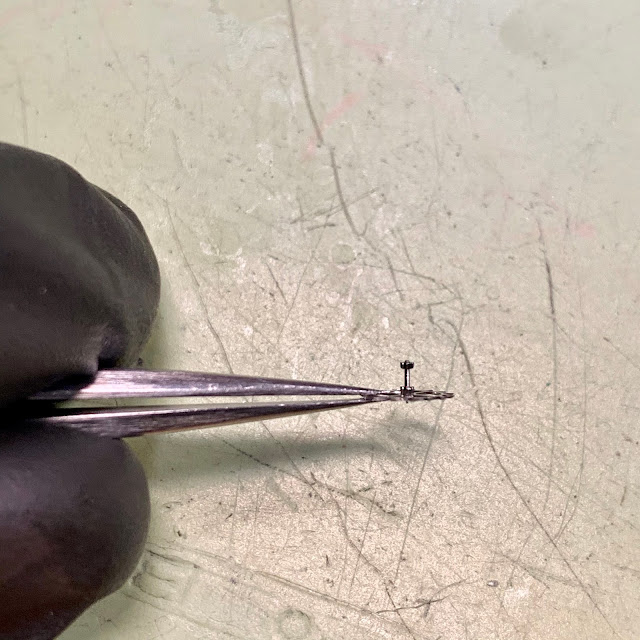 With a replacement escape wheel installed, the reassembled movement is ticking away with a nice motion.  The timer will tell me how well it's running.  You really can't adjust a watch with a stop watch.  A timegrapher is an absolute necessity. 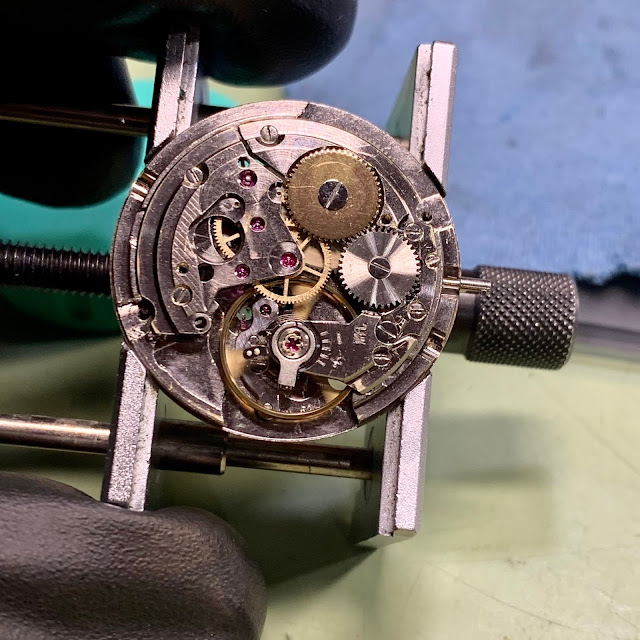 It's running a little slow but the beat error of 8.3ms is way to high.  Fortunately it's easy to adjust on this movement. 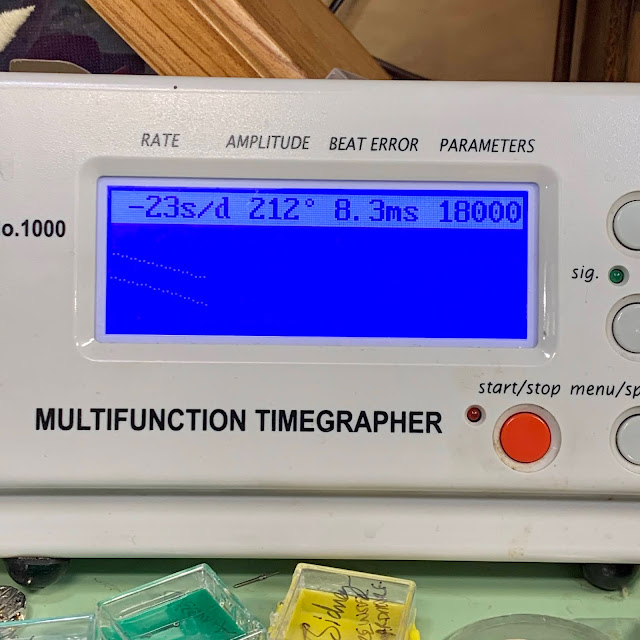 A few tweaks to the position of the hairspring stud centers the balance and reduced the beat error to 0.1ms.  That means the balance swings equally from side to side. 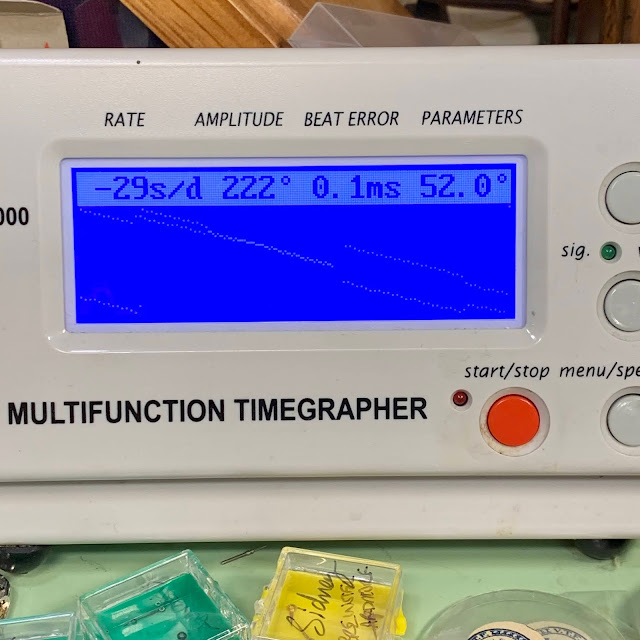 With the beat error out of the way, I can tweak the regulator pins and speed the watch up.  +8 seconds per day is a good place to leave it for now. 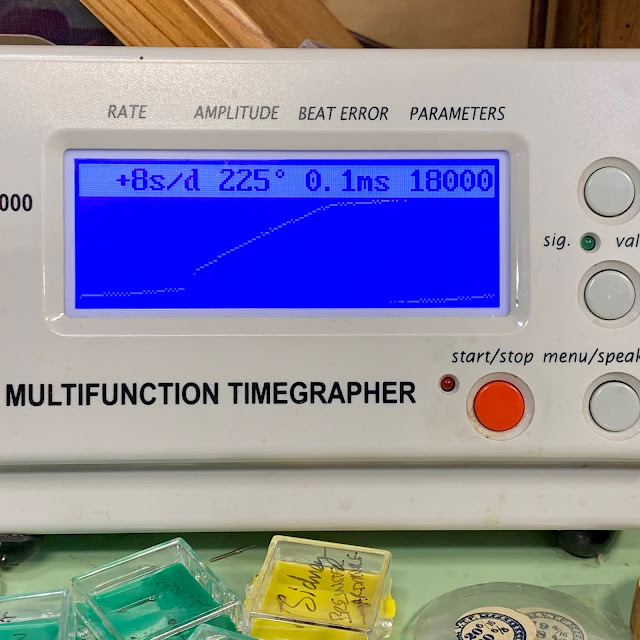 My merciless light tent makes this watch look worse than it really is.  It actually looks way nicer in real life. 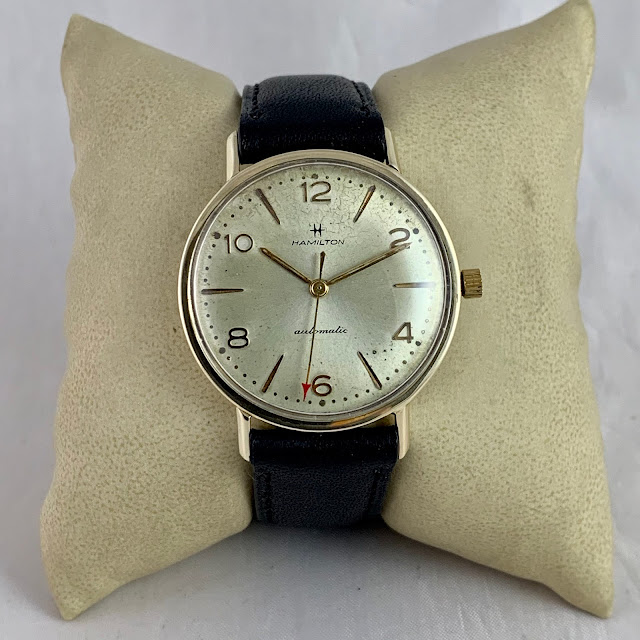