It's been a while since I've posted a detailed step-by-step overhaul.  That's partly because I've already posted quite a few... you can check them out here.  But, there are still a few different movements to showcase, including this one. 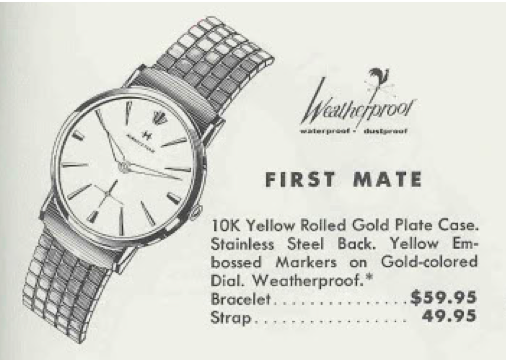 One of the things that makes the First Mate interesting is pretty much everything on it is gold-colored.  From the yellow rolled gold plated case, to the hands, and even the dial - this is a golden watch for sure.  Only the stainless steel back is not gold colored.

Tucked inside the waterproof* case (* means as long as the gaskets are good) you will find a Swiss-made 686 movement.  So you know the First Mate was an entry-level Hamilton - designed to compete with other manufacturers at competitive price points.

If you've followed my blog, I'm sure you'll agree that I like to find watches that are pretty rough looking and my project First Mate was no exception.  It looked pretty beat up when I received it but it was mostly thanks to the severely gouged up crystal.  Normally plastic crystals will polish up pretty cleanly - but this one is definitely a candidate for replacement. 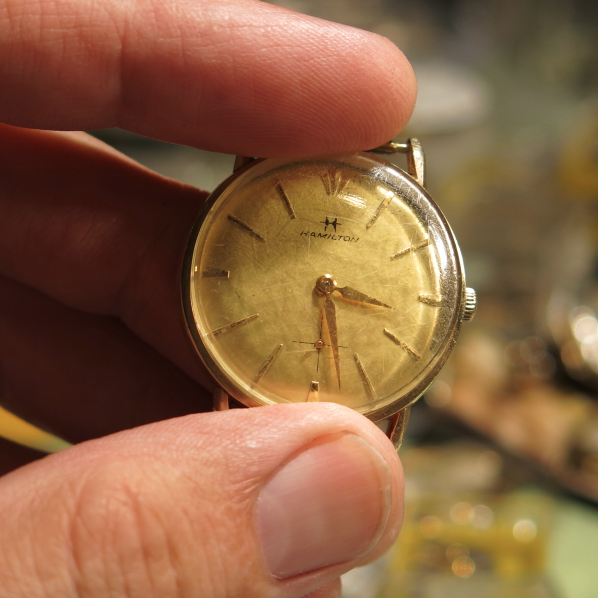 Part of the trick with these waterproof cases is to figure out how to open them.  Many times you need to remove the crystal and a two-piece stem allows the movement to come out the front.

This watch opens through the back though - and the little lip you see between the lugs is an indicator of where to open it. 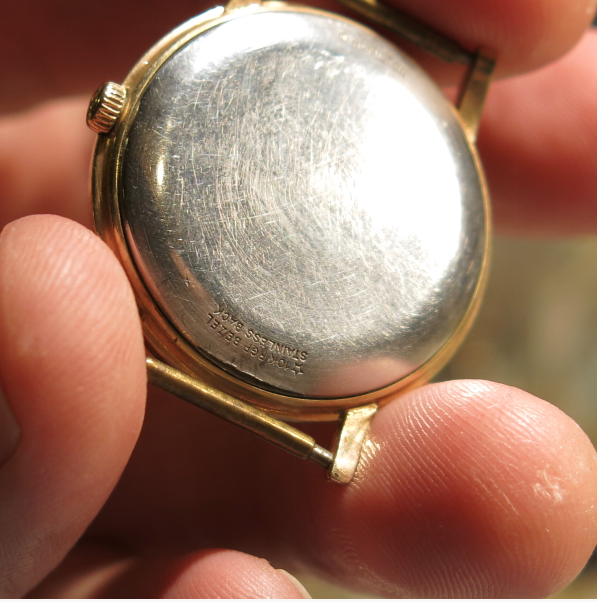 Under the case back is the Hamilton 686 movement.  This is a variant of an A. Schild 1200, a 17 jewel movement.  Remove the stem by loosening the screw closest to the stem (on left) and the movement will come right out. 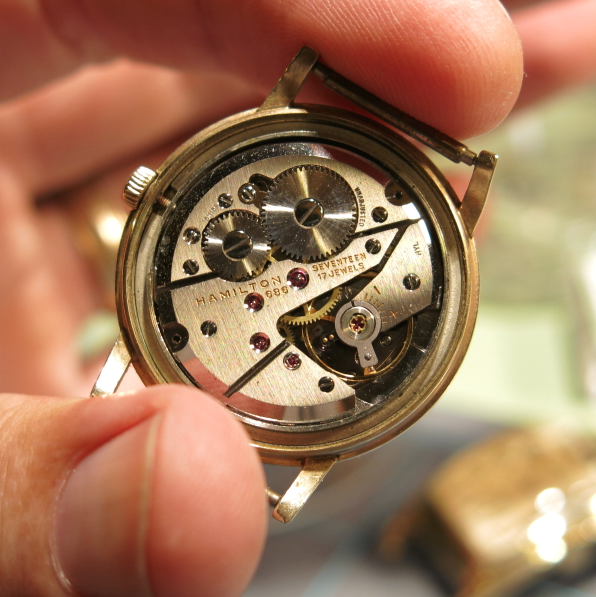 The front side of the movement has the dial and hands still installed.  You can see by the slight corrosion around the perimeter that the * in waterproof is there for good reason... some moisture got into the watch at some time in it's past.  Probably through the stem - since it's a little rusty too. 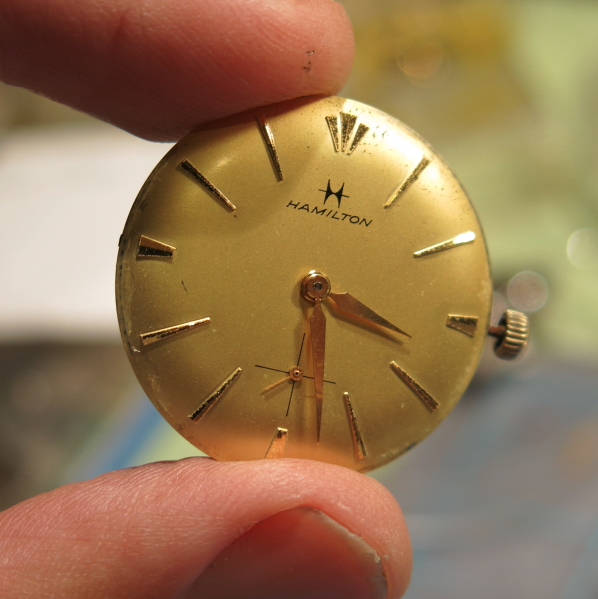 The hour and minute hands are removed with "hand pullers" but the second hand will come off when I remove the dial.  To do that, I need to loosen the two dial foot screws on opposing sides of the movement.  The moisture in the watch rusted one of them in place - that's never fun to deal with!  My ultrasonic cleaner will clean it up a bit. 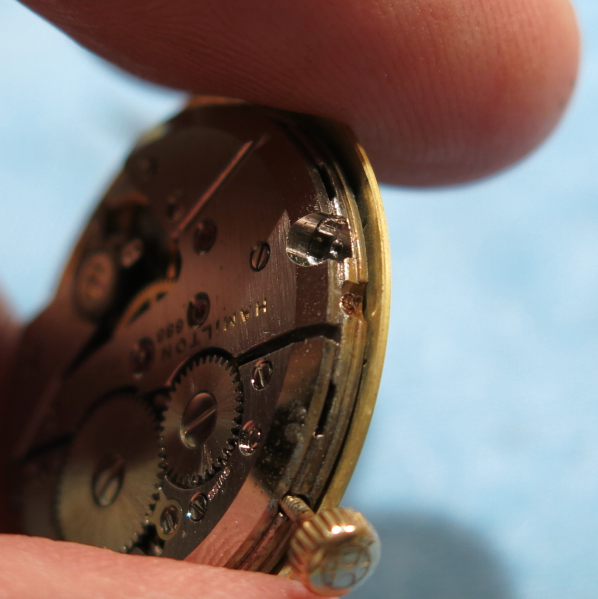 With the dial off, you can see a little evidence of moisture - but not too much rust, thank goodness.  The  hour wheel and cannon pinion in the center come off now, so I'll be able to pull the center wheel out from behind (when the time comes). 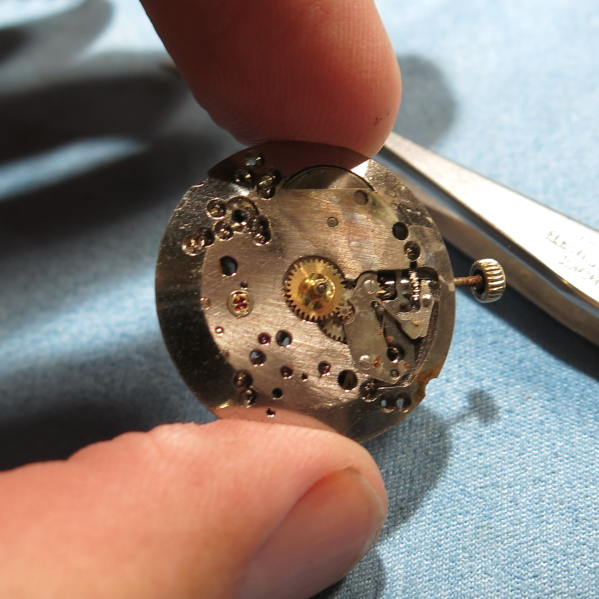 Doing ANY work on a watch movement really requires mounting it securely in a movement holder.  This is not the sort of stuff you can trust your hands to hold and "fat fingers" are a rsure ecipe for disaster.

With the movement secure, the mainspring is "let off" by holding the "click" (to the right of the large ratchet wheel on the bottom right) open and letting the crown spin backwards while slowing it with your fingers... sort of the opposite of winding.  That releases all of the energy stored in the mainspring - so it doesn't go out through the gear train by accident.

Each of the screws in the "barrel bridge" and the "train bridge" come out so both bridges can come off and expose the wheels underneath.  Now you can see the mainspring barrel at the bottom, and then the center wheel, third wheel, fourth wheel and lastly, the silver colored steel escape wheel at the top left.

They all come straight out. 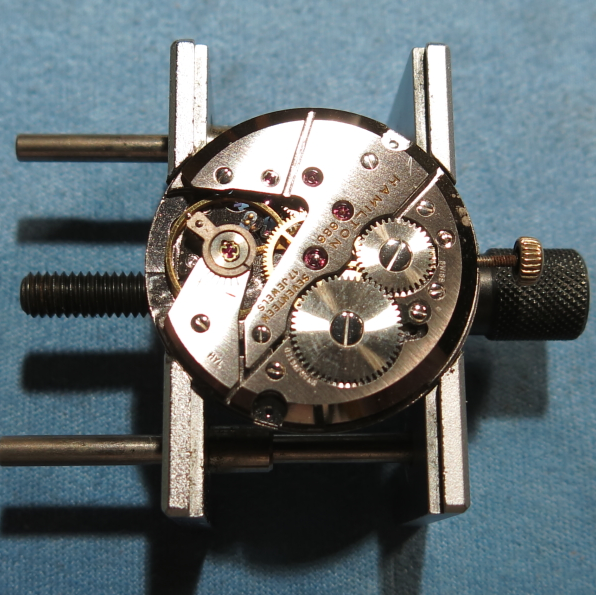 With the movement clear of wheels, the balance assembly comes off as well - to expose only the pallet fork remaining on the left. 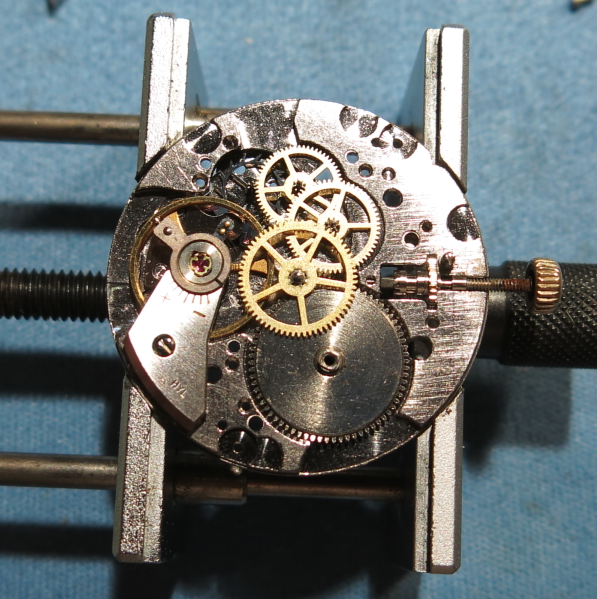 Then, on the front side of the movement, the minute wheel and other parts are removed to allow thorough cleaning.  You can see on the left, the gold spring that provides the shock jeweling protection for the balance assembly.  Technically this should come off too - but it requires a special tool and you have a 99.9% chance of losing the spring if you're not extremely careful.

My ultrasonic does a very nice job of cleaning out any old dirt and grime, so I leave those jewels in place. 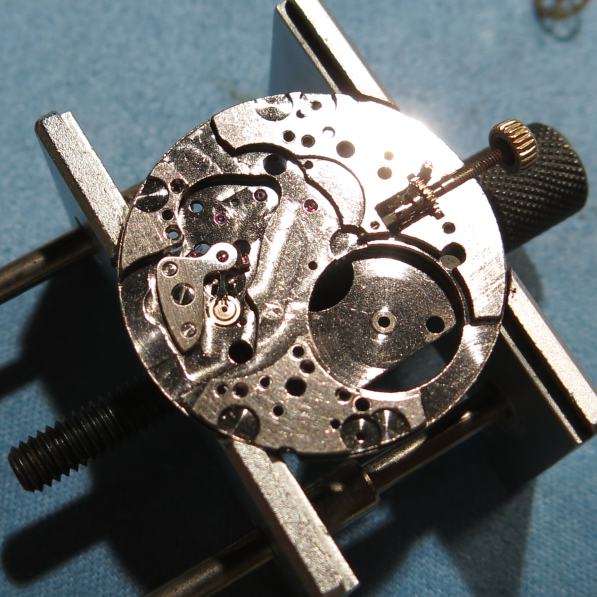 Everything spends about 8 minutes in cleaner and another 12 or so minutes in various rinses so once it's all laid out to dry things really sparkle.  It may seem like a lot of parts - but after you take a watch apart a few dozen times you learn to tell exactly where everything is supposed to go. 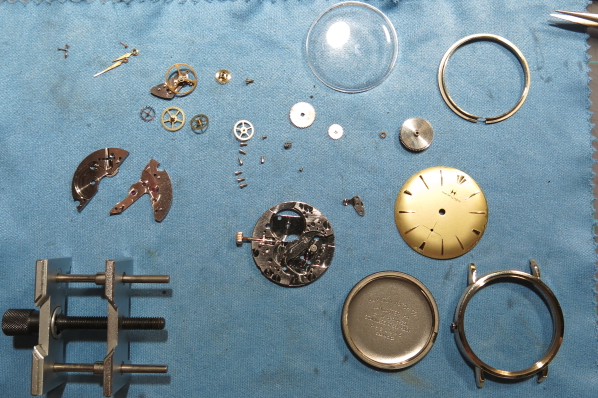 Re-assembly is basically the reverse of disassembly, except the balance assembly goes on last.  All of the jewels get a tiny droplet of oil.  With the mainspring wound up, the watch goes onto the timer.

Here you can see it's running just a little slow, 17 seconds per day, to be precise. 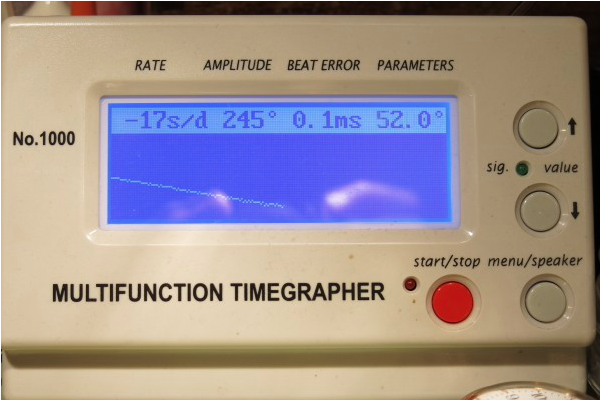 A little tweaking of the regulator speeds it up to closer to zero.  I like to leave watches just a hair on the fast side, as they will slow slightly as the mainspring releases. 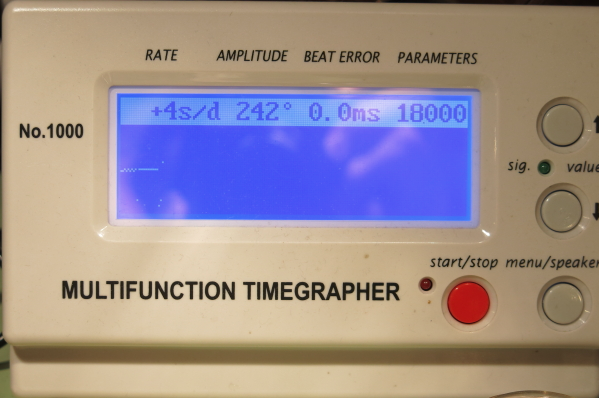 And here it is, all cleaned up with a fresh crystal and a nice lizard grain strap in brown.  There's a tiny bit of moisture damage on the dial near the second hand but otherwise this watch turned out excellent. 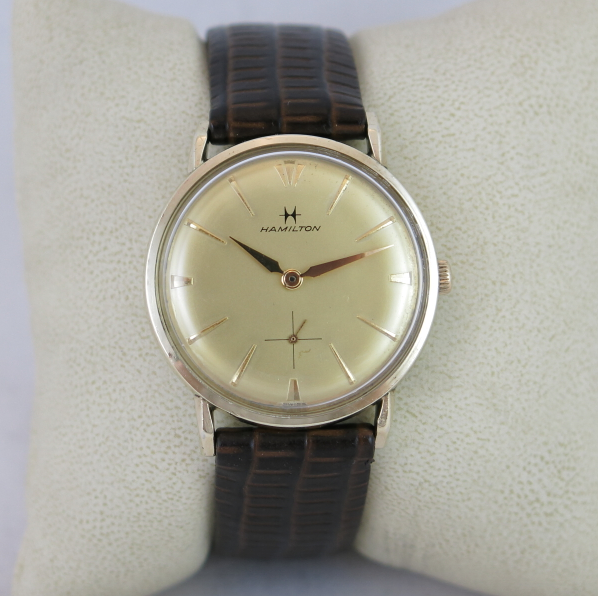 In 1965 the First Mate was also offered with a white dial so both a golden dial or a white dial was available.  The white dial continued to be offered through 1967. 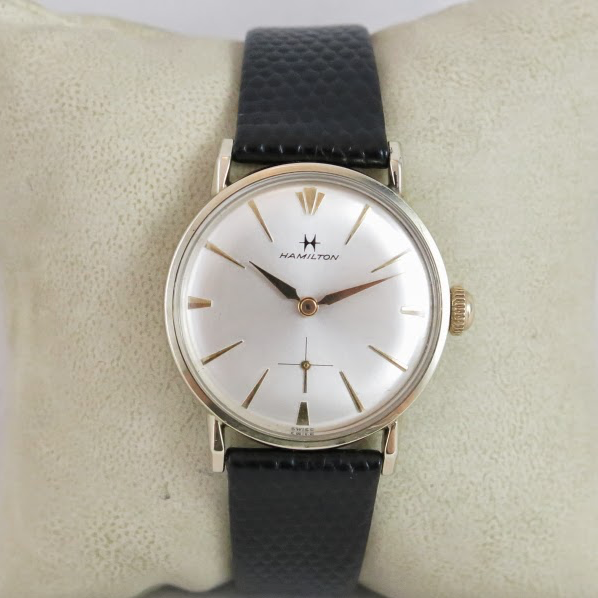