There is a dizzying array of Hamilton pocket watches.  There are at least 30 different movement grades, not to mention the variety of dials and case designs.  They come in two general flavors… dress pocket watches and railroad watches.  They also come in three general sizes, 12, 16 and 18 size.

Of course, you could add the ladies pendant and bracelet watches to the list and that would bring in several more 6/0, 0 size movements.  But as far as men's pocket watches go, let's stick with the 12, 16 and 18 size models.

Most collectors seem to gravitate to the railroad models, or at least the 16 and 18 size grades in general. Of that, the 16 size is usually of greater interest.  As the jewel count goes up, so does the general value - but some grades are very scarce so that adds to their collectibility.

The poor little 12 size grades are often overlooked - but that's mainly due to their smaller size and not being "railroad approved".  However, even the most basic 12 size movement is still a very fine watch. 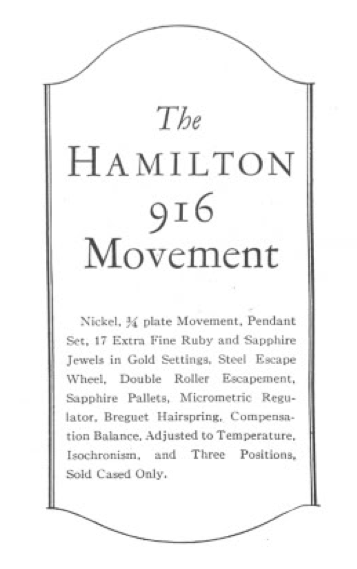 The 916 was produced along with the 922 and the 902 movements.  The 922 has 23 jewels, the 902 has 21 and the 916 has 17.  Other fine details are added as the jewel count increases and often the higher grade movements were installed in solid gold cases.  They are all very nice looking movements as well.

The 916 is a finer grade than the more common 912 movement that was introduced in the mid-1920s.  Some of the main differences include the jewels being installed in solid gold "chatons" (settings) as well as the adjustments to temperature, isochronism and three positions.

Isochronism is the ability of the watch to compensate for the decrease in strength of the mainspring as it lets out.  When isochronism is an issue, the watch will slow as the tension lets out.

Eventually the 916 would be replaced by the 918 movement… someday I'll post more info on that grade.

I've had a 916 on my bench for a long time.  In fact I have several pocket watches waiting for some love.  One of the reasons I didn't tackle the 916 was the stem sleeve needed to be replaced and although that's not hard to do, getting the right parts requires a decent selection of parts to choose from.

On my project watch the sleeve was shot and the stem would not stay in the winding position.  I could push it in but it would just pop right back out.  Changing the sleeve is a function of three things, the type of stem, the type of case, and the sleeve that matches the stem and case.  Sometimes there's a lot of trial and error to get a good match.

I decided to send the watch out to a favorite professional watchmaker of mine and he replaced the sleeve for me while he overhauled the movement too… killing two birds with one stone, as they say.

My 916 is a pretty watch, in my opinion.  I came in a white gold filled case. 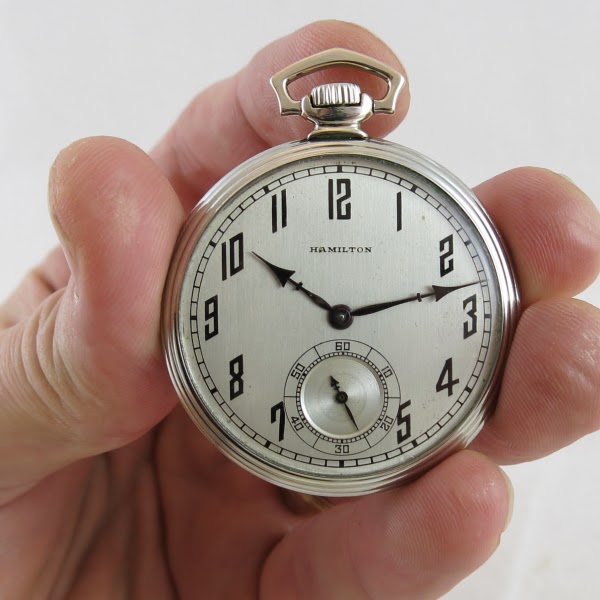 During this time, you could pick the dial the movement had as well as the Hamilton case it went into.  This dial is a No. 14A 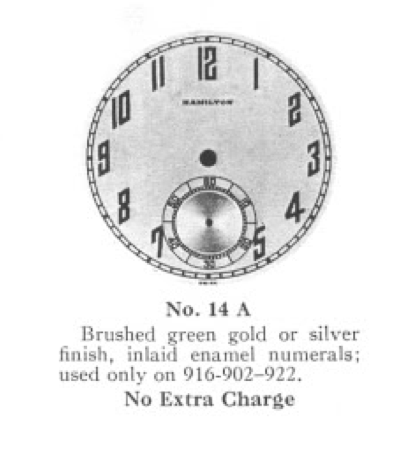 The back of my watch is unengraved, but the inside dust cover is engraved with it's original owner's name and an important date from their lifetime. 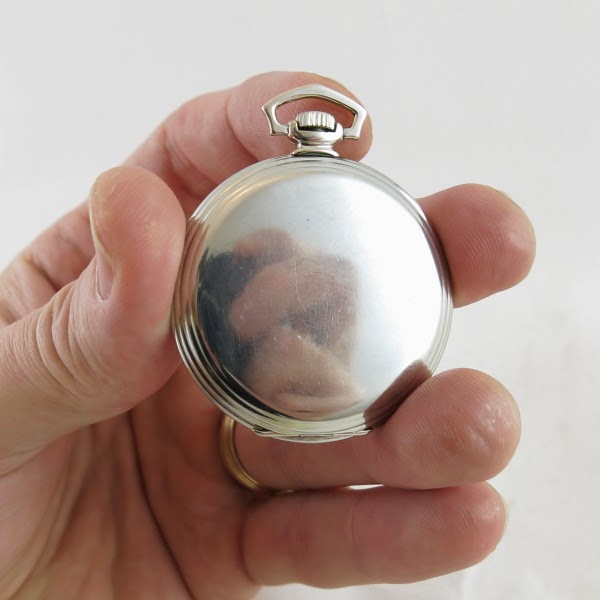 Here you can see the 916 movement itself.  It's nicely damascened and the only detraction to my eye is a scratch from a past watchmakers screwdriver near the blue screw in the upper right.  The micro metric regulator adjustment is a great feature.  The gooseneck spring allows you to fine tune the regulator's position using a long screw on the side of the balance cock. 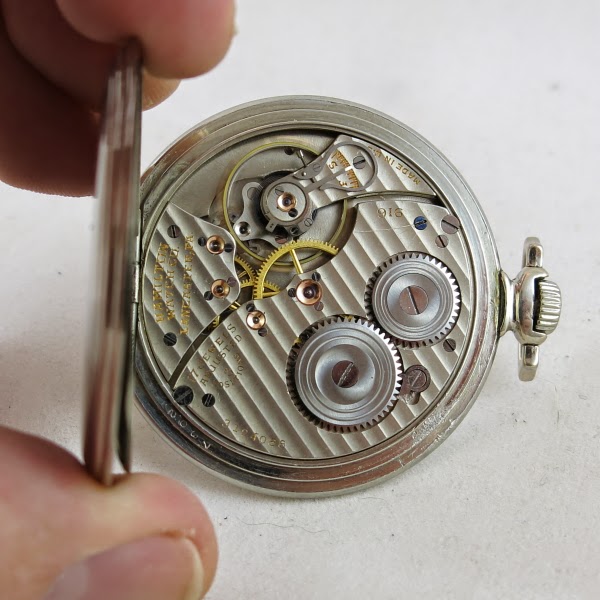 The 916 doesn't look that much different than a 912 really.  The differences are really in the finer details like the solid gold chatons and balance adjustments.  But the 912 had a much longer production run so there are a lot more of them out there.  I think that makes the 916 a more collectible grade - since there are fewer of them and they are a slightly higher end grade as well.
Posted by HandyDan at 10:52 AM