1964 was a funny year in the Hamilton lineup - there are a number of M-series models (for "male") but they were included in the usual catalog for that year.  I don't know if they were for a special market or what the reason for the line was but there are 12 different M-models to try to locate today.  There are F-series models too if you collect ladies watches… there are 14 of those in the 1964 catalog.

Unlike the other two M-watches, the M 89-3 is an automatic watch.  It comes in a stainless steel case.  The dial has a white radial finish with printed black numerals and silvered markers.  The silver hands are luminous and there are luminous dots at the 12, 3, 6 and 9 positions.

Under the dial is a Swiss-made Hamilton 689A movement with 17 jewels.

My M 89-3 example came with an grungy Speidel bracelet, which will have to go.  The dial is a little faded but otherwise everything else looks promising. 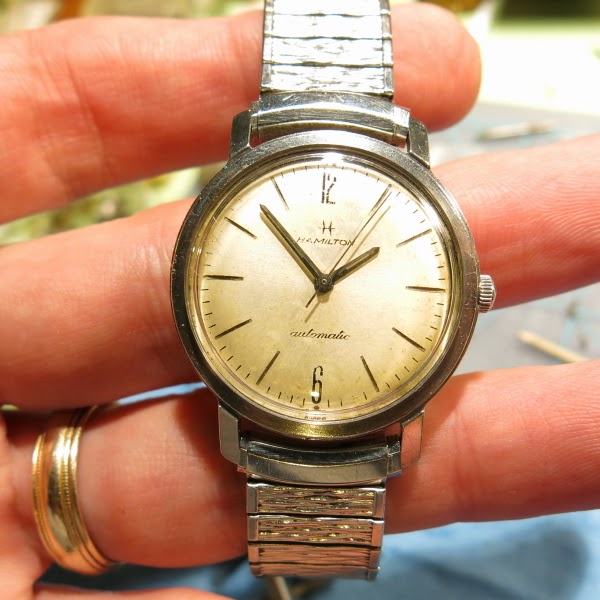 The back of the case screws off - which is nice because that means no pesky two-piece stems to fuss with. 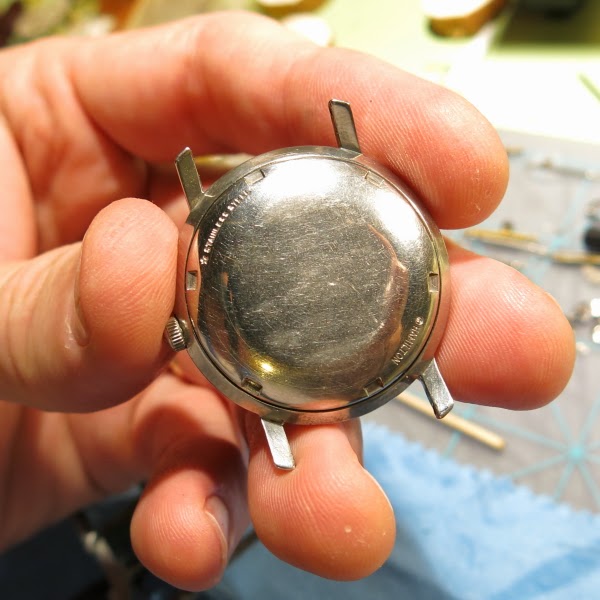 The movement doesn't look like it's seen a watchmaker in quite a while.  The rotor has some green verdigris that will hopefully come off in the cleaner.  The watch is running though - which is always a good sign. 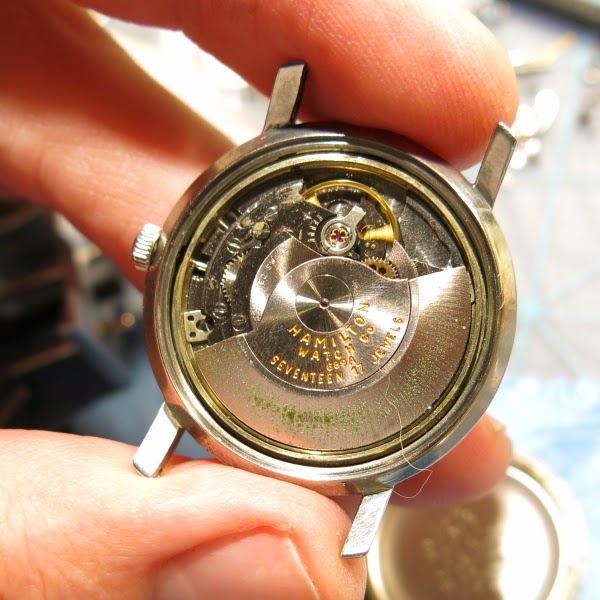 With the movement out of the case, my instincts tell me to leave this dial alone.  The last thing I want to do is accidentally remove what printing remains on the dial.  It is 50 years old, after all, and it's still very presentable, even though it doesn't look new. 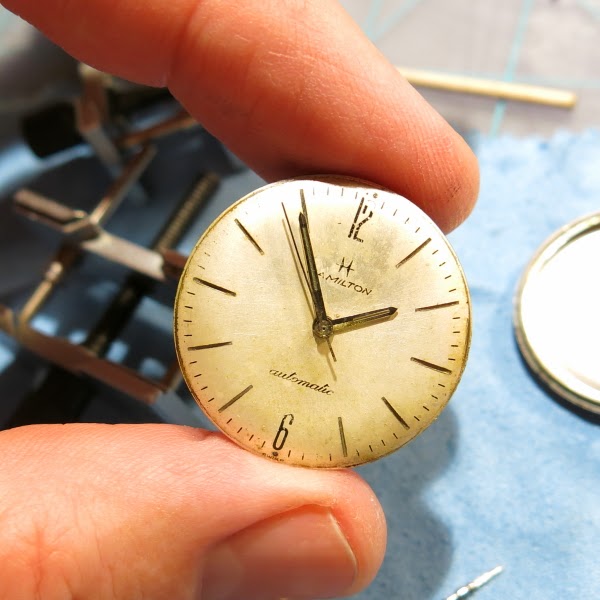 The 689A is an ETA movement.  It's an interesting design in that the only thing that passes from the back of the base plate to the front is the second hand post.  The "center wheel" on this movement is actually off to the side - you can see it in the lower left in the photo below. 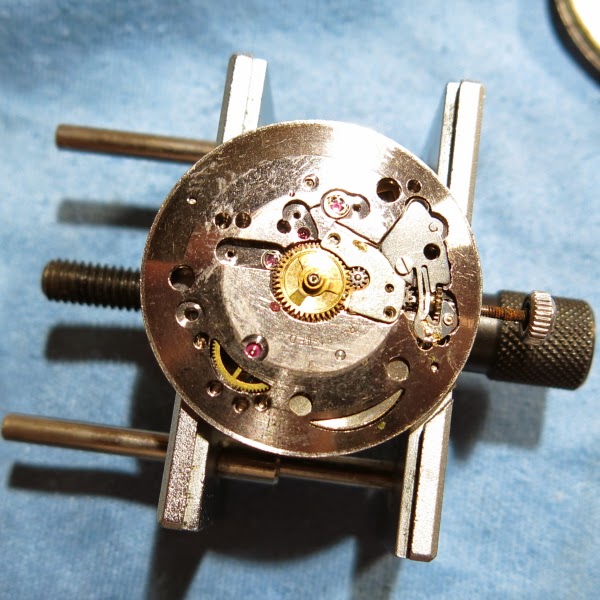 The rotor assembly is the first thing off the back and I'll break it down into pieces for a thorough cleaning. 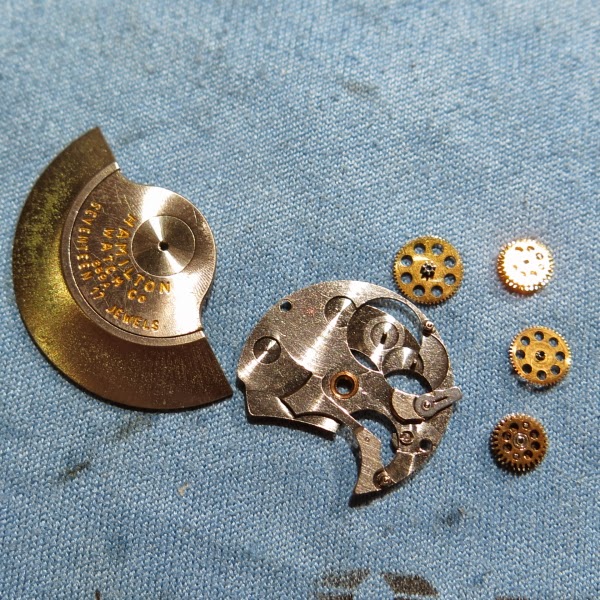 Everything gets cleaned and rinsed and then set out to dry before reassembly. 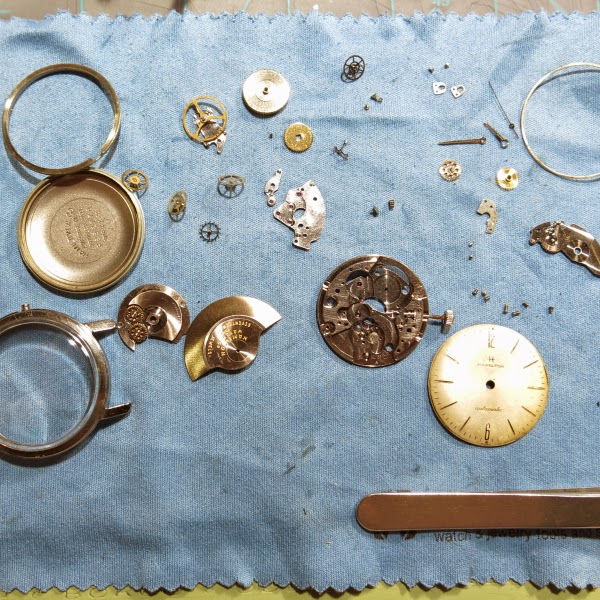 With everything oiled and lubed as appropriate, the watch is running a little slow right out of the chute. The beat error is okay at 2.7ms but the beat error is easy to adjust on this movement so I'll go after the that first. 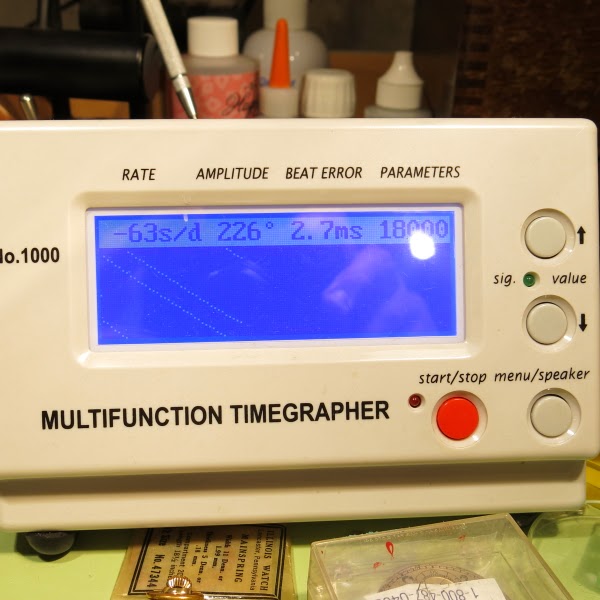 Adjusting the position of the hairspring stud on the balance cock changes the beat error (or centers the impulse pin with the pallet fork).  A beat error of zero is perfect alignment so the balance swings equally on each side.

Now that the beat error is 0.2ms, I can speed the watch up by tweaking the regulator.  You can see the beat error decrease by the two lines getting closer to each other.  Initially I movement the hair spring stud the wrong direction and made the error greater than the photo above. 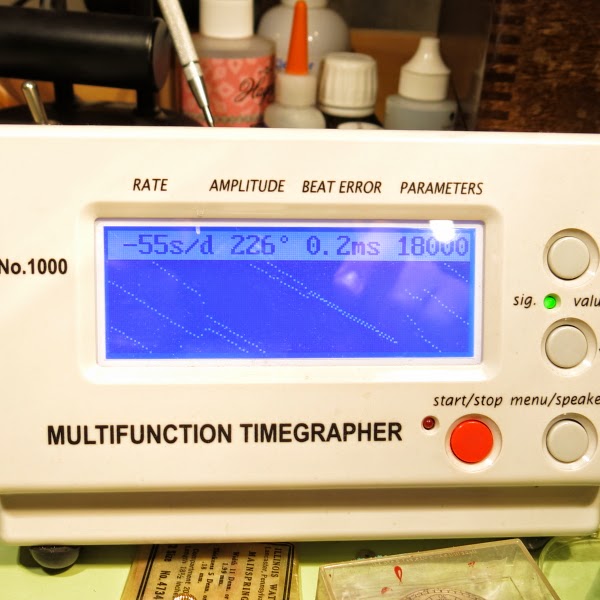 Tweaking the regulator adjust the effective length of the hairspring so now the watch is pretty much running dead-on with good amplitude (238 degrees) and a low beat error.  Time to put the rotor back on. 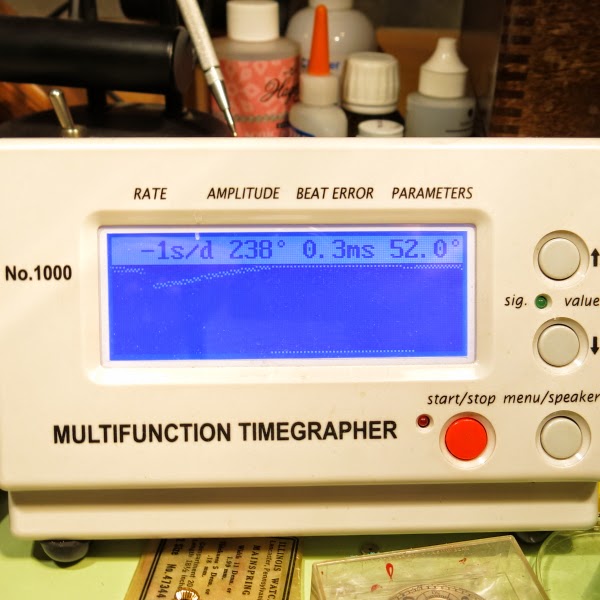 The rotor is held on with two screws but you need to line up the gears so they will mate with the gold ratchet wheel over the mainspring barrel. 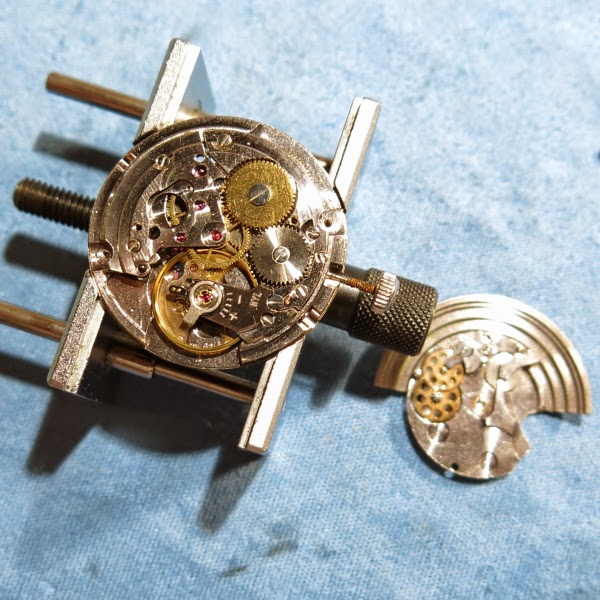 Flipping the movement dial-up, the next thing to go on is the hands, set at 12:00 so they will stay in sync with each other. 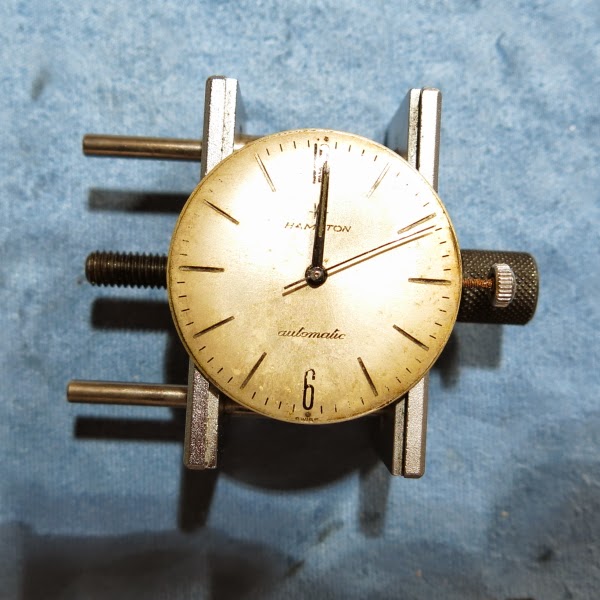 Finally, everything goes back in to the freshly polished case and a new black lizard strap completes the restoration.  The dial looks pretty good but not great.  Cleaning it would ruin it for sure so I'll quit while I'm ahead.  I'll take a presentable original dial over a nicely refinished dial, any day. 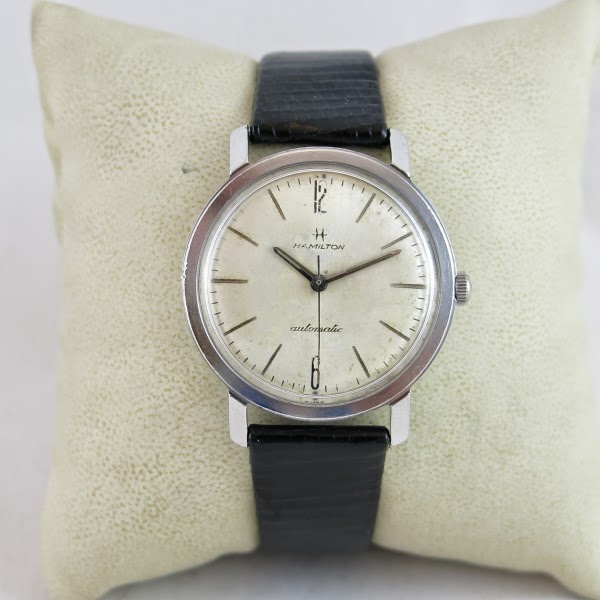 And here's a wrist shot of a much nicer M89-3 example, courtesy of a fellow collector.  Not only is his fail way better, his example even features the original bracelet! 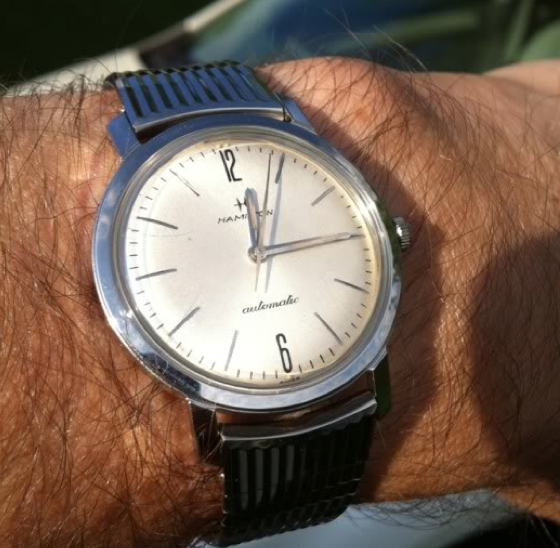 Well, you've got to love the 1960's.  Hamilton threw a lot of curve balls in the last two decades of US-production and there are many examples of legitimate oddities... dial variations, differing hands, case and dial combinations, miss-marked case backs... you name it.

I recently saw an eBay auction for what looks a lot like an M89-3.  There are some subtle differences though.  For example, the H on the dial is silver and not black.  The hour markers extend to the edge of the dial.  And the real biggie is the case is a one-piece case. 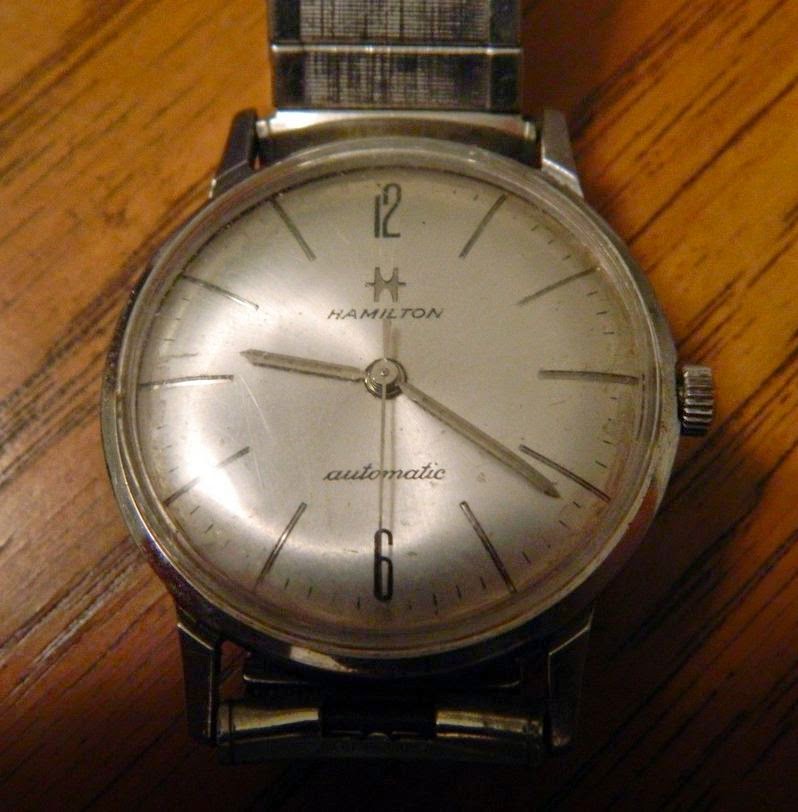 The crown on the auction example isn't marked with the H logo, where my example is.  The auction stated that the watch had a 689 movement but there was no photo of it.  This would be an earlier version of the 689A in my watch. 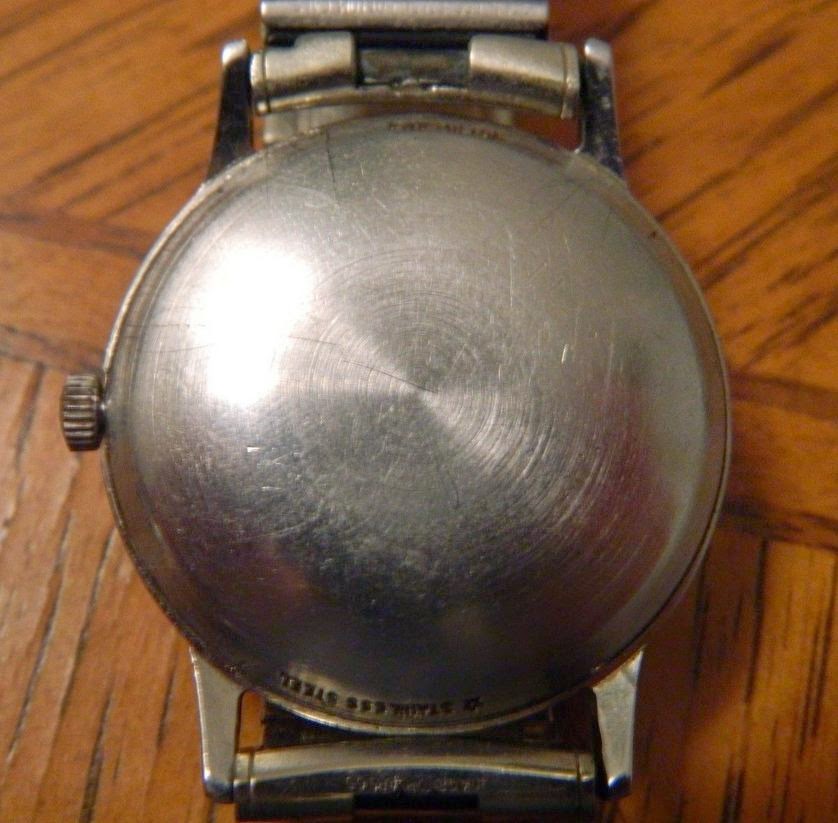 It's very hard to tell for sure, but it looks like the lugs on the auction watch are a little more slender and maybe a better match to the catalog - that's a tough call though really.

So - there you have it... another example of Hamilton-oddities captured from the wild.  I'm not sure these are really that different.  The M-series only shows up in the catalogs in 1964 - but they were supposedly made from 1961 through 1967 so other variations might exist.   They certainly were intended to be separate from the other models for some reason.  Maybe they were produced for another market or for sale through a special channel.

Perhaps they are two mid-year variants of the same model and just not cataloged as a M89-3 and M89-3B like what would have been done in other situations when models evolved over model years.

Who knows?  But apparently no one's collection will be complete until you capture them both... ha ha!
Posted by HandyDan at 5:35 PM