When Hamilton ceased US production in 1969 much of the Hamilton model line was discontinued.  Not all models ended though... some continued on for a few more years.  Hamilton had acquired Buren in the early 1960's and used Buren's movements in their "Thin" watches like the Thin-o-Matics and Thinline series.  When Hamilton's US production stopped, manufacturing shifted to the Buren plant in Switzerland. 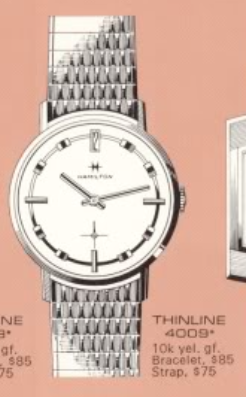 The Thinline 4009 is one of the few gold filled models with Swiss manual winding movements.  It seems most of the time you'll find them in rolled gold case.

The dial on the 4009 is a brushed silver finish with a gold chapter ring and golden markers with black insets.  The golden baton-style hands also have a black stripe to match.

Tucked inside is a Hamilton 639 movement - this 17 jewel was made by Buren and is the same as a caliber 280.

I recently picked up a Thinline 4009 that was rather dirty but I hoped would clean up well.  It came on a Speidel bracelet that was not original to the watch, so I removed it as it was starting to wear into the lugs a little. 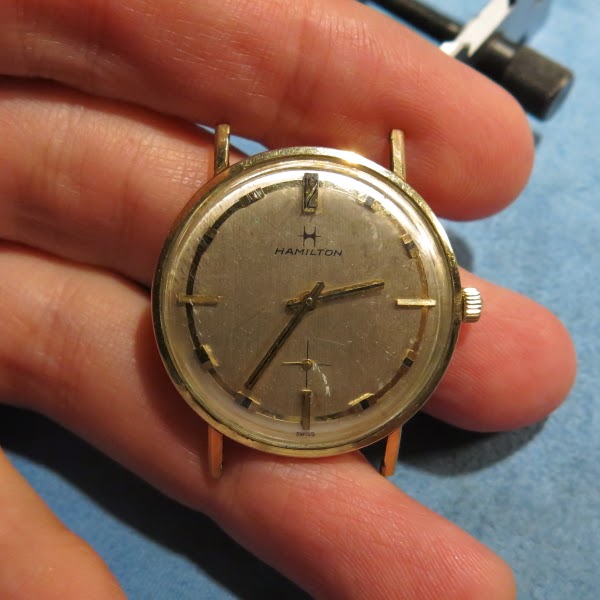 The 10K gold filled case opens through the crystal and from this perspective you can see why this watch is part of the Thinline series... it's very skinny. 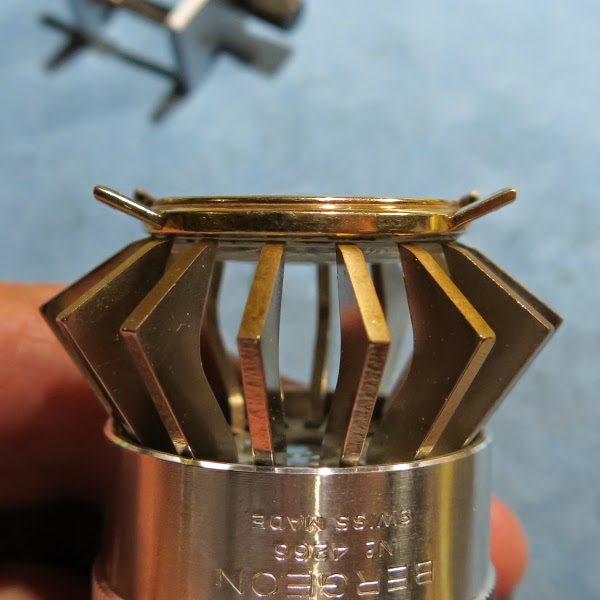 The 639 is a nice movement, in my opinion.  First of all, all the axles are short so it's very easy to line up all the pivots.  Second, the balance cock has a moveable hairspring stud - so tuning in the beat error is a breeze.  The only thing I don't appreciate with the 639 is the hairspring is very close to the regulator so you have to be extremely careful not to touch the hairspring if you attempt to move the regulator. 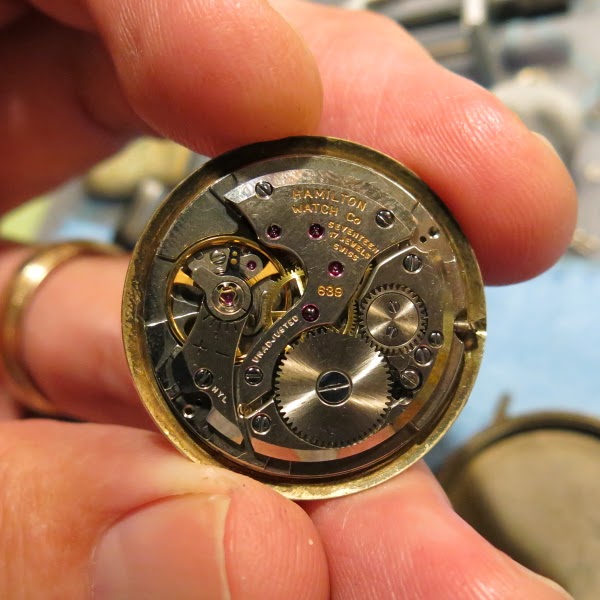 The dial-side of the pillar plate is hazy and that's a sure sign this watch hasn't had a trip to the spa lately. 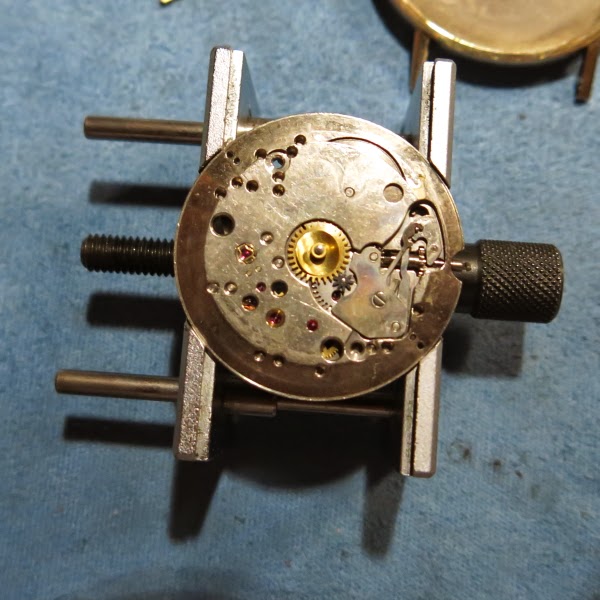 The one-piece case has a movement ring (removed) and it reminds me of the "Sea Something" that I restored last month.  The bottom is a little flatter though.  The inside of this case back is very dirty too, for some reason. 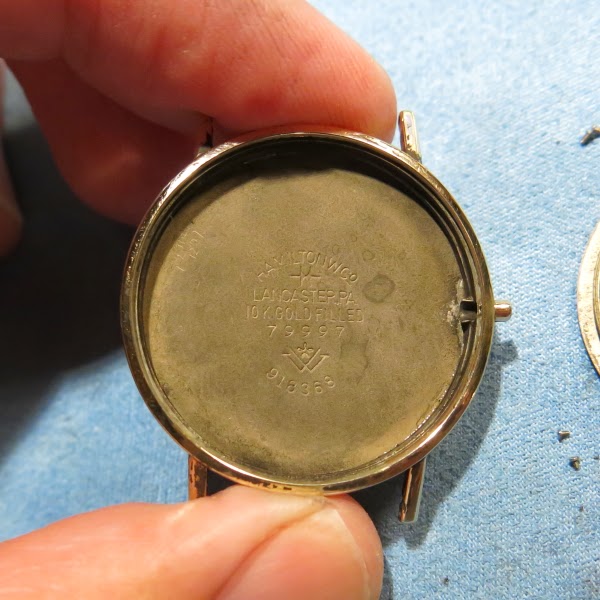 Everything gets cleaned and dried.  The dial had a couple of old fingerprints but I was able to remove them - thank goodness. 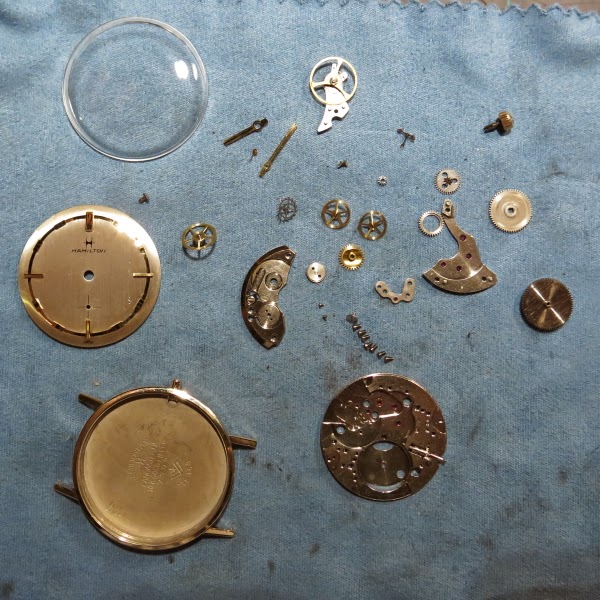 The reassembled movement goes onto the timer and initially it started off running a little slow (36 seconds per day with an acceptable beat error of 1.2ms.  The amplitude of 208 degrees is a little low but that's because I didn't wind it fully since this watch has a split stem. 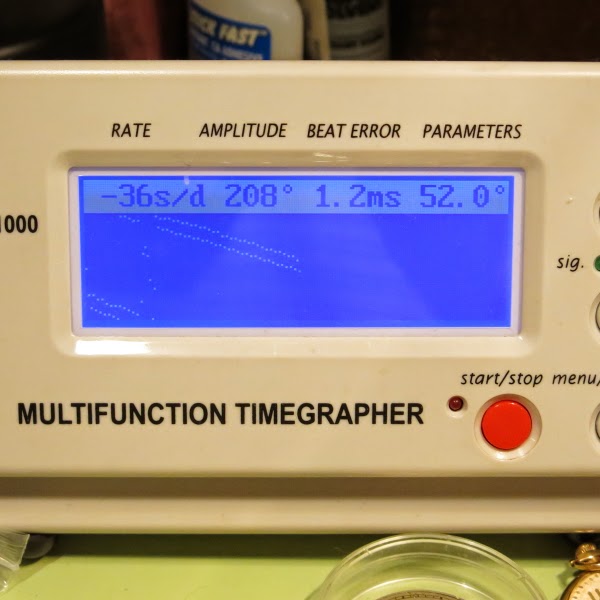 A little tweaking to the hairspring stud and the regulator gets the watch to even on pretty much dead on with an even better beat error.  I could probably get it even closer but I don't want to risk hitting the hairspring. 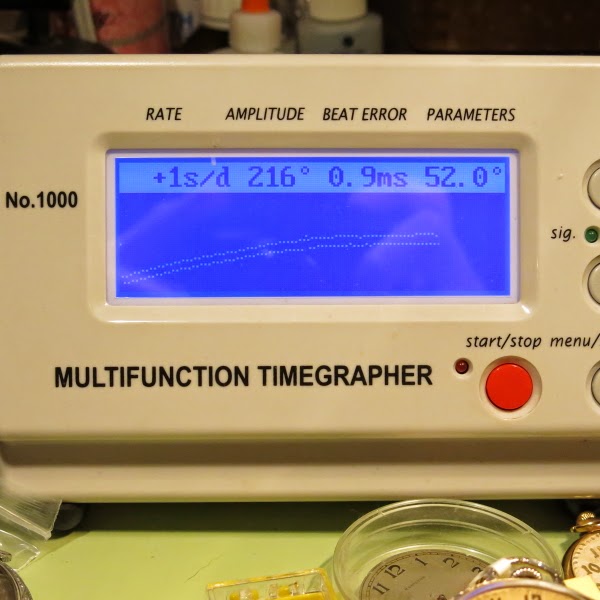 And here's the finished watch with a new crystal and a nice, thin lizard strap.  I had to take the photo on an angle as the markers and hands are so reflective they look black from straight on.  This is a highly reflective watch - which is great, as everyone wants a dress watch with a little bling every now and again. 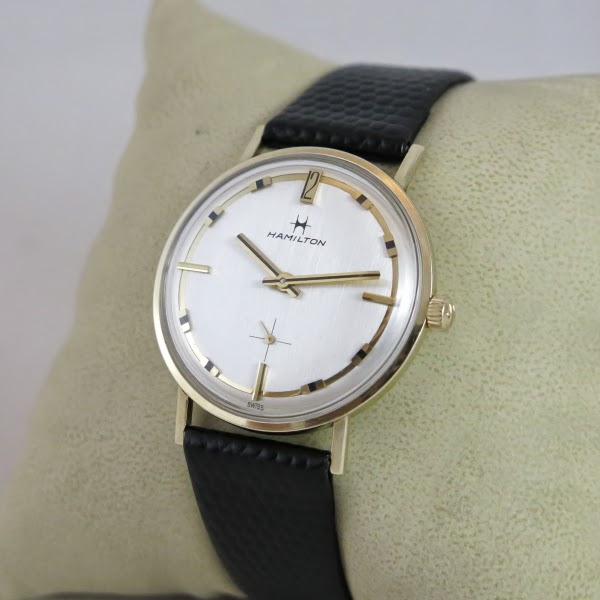