The 20th century introduced a number of "revolutionary" materials that were great advancements for mankind.  "Miracle materials" like asbestos were used in all sorts of common places.  Only after years of exposure would we collectively realize that maybe they weren't so great after all.

Another miracle material was radium.  Radium is a naturally occurring element.  In fact, many areas have radium-derived radon gas seeping to the surface of the earth and it's a common thing to test for when you buy a new house.  Now days radiation is something most people are very concerned about but back in the mid-twentieth century it was used for all sorts of things... including toothpaste and suppositories to improve your sex drive.  Marketers of radium-containing products lauded the restorative powers of their products... the consumption of radium meant that "every tissue, every organ in the human body is bombarded with it's health-giving electric atoms".

Well, apparently it will also kill you.

Radium was also used as a paint and the radiation that it emits reacted with other material in the paint to make the material glow, 24x7.  It was a perfect solution for things like clocks, signs or other indicators that you might want to see in the dark.  Although eventually the glowing material in the paint burns out, don't worry... the radiation sticks around for 1,600 years.

Pretty scary, right?  Well, don't be too alarmed.  First of all, the radiation is easily blocked by glass, your skin, etc. so the main concern you should have with radium is that you don't consume it.  Radon is a gas - so the concern with radon is breathing it in - sort of like smoking.  Everyday exposure to the gas could cause health concerns down the road.  (proper venting of basements and crawlspaces dramatically reduce the exposure risks).

Anyway - like all other watch manufacturers, Hamilton used radium paint on models with luminous features (hands, markers, etc).  Usually the lume was visible so you could see the elements glowing in the dark.  However, in the 1950's there were a number of models that featured "silhouette hands" - where the radium was applied to the bottom of the hands - and it cast a glow onto the dial and backlit the hands as a silhouette.

An example of one of these models is the 1955 Automatic K-250.  It was produced for three years. 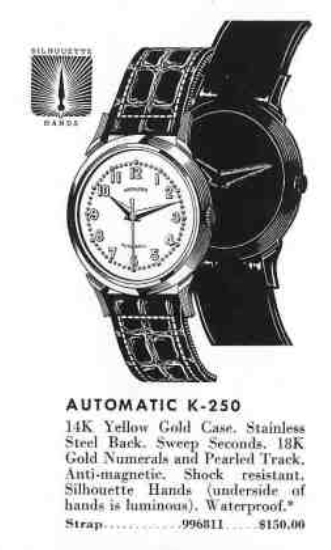 One of the problems today with silhouette hand-models is the dials are often burned by the close proximity to the hands.  Of course, you'll see that with any of the luminous watches.

The K-250 came in a 14K solid yellow gold case with a  stainless steel back.  The silver embossed dial has 18K gold numerals and a pearled track.  Tucked inside the case is a Hamilton 661 automatic movement.  This 17 jewel grade was made by the Swiss-maker, Kurth Freres.  It's a very common model is just about all of the K-series watches.

My K-250 project watch arrived in fairly nice condition.  The crystal was pretty beat up but otherwise it looks very promising.  The strap it came with is obviously a little too narrow. 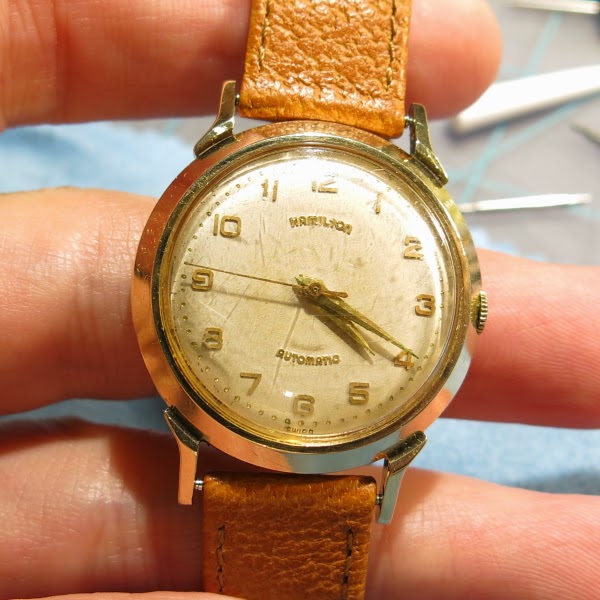 The stainless steel back screws off of the case and it has been roughed up for some reason.  I suspect it must have had an engraving at some point and it was removed.  I'd rather see an engraved watch than a watch without engraving, but that's just my personal opinion. 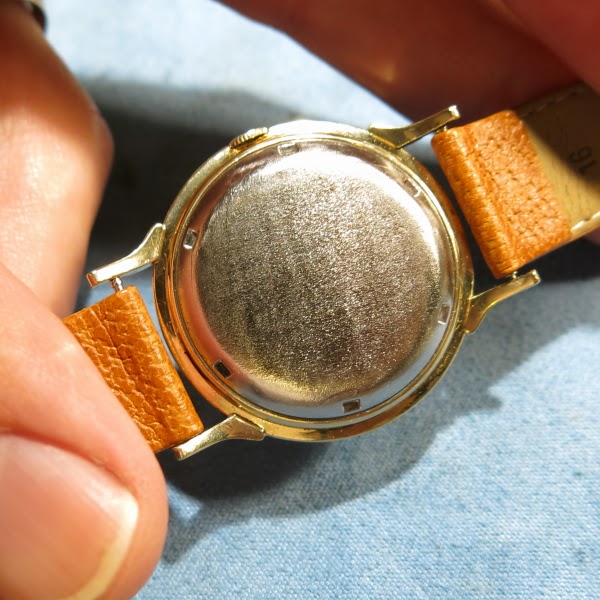 The 661 inside is in fine condition.  It seems to run okay but I'm sure a trip to the spa will do it a lot of good. 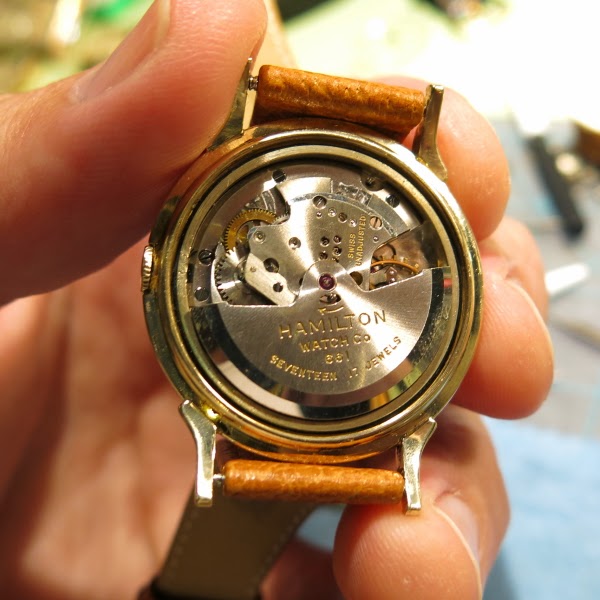 Without the crystal in the way, the dial looks surprisingly good.  It may have been redone at some point in it's life but if it was, it was a long time ago. 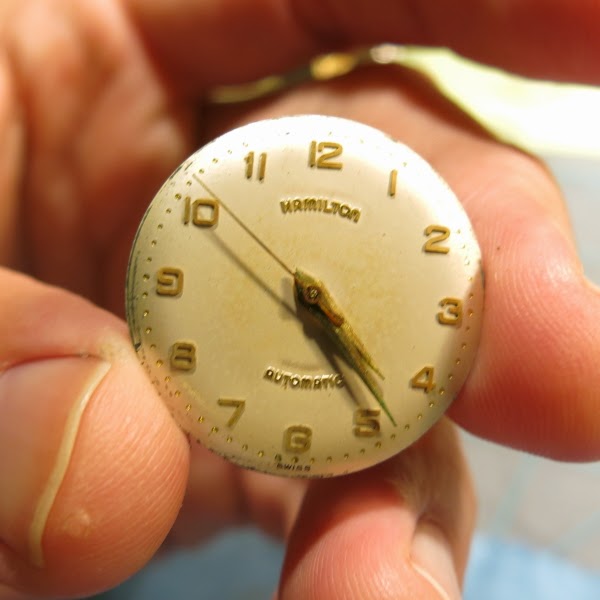 There are a lot of parts to an automatic.  They're all cleaned up and ready to be reassembled. 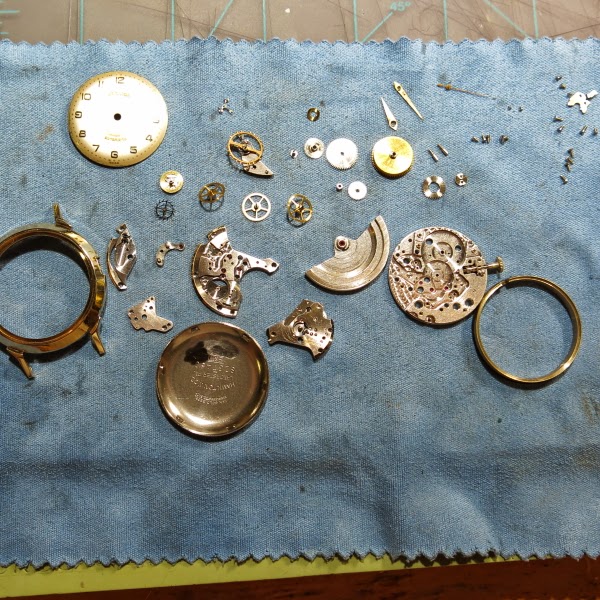 Without the oscillating weight and it's carrier installed, the movement looks like your garden-variety manual winding movement.  It's now happily running and ready to go onto the timer.  You can see that this model has a large train bridge that covers the majority of the back of the watch.  It can be a little tricky to get all the wheels lined up at once so the bridge will fall into place. 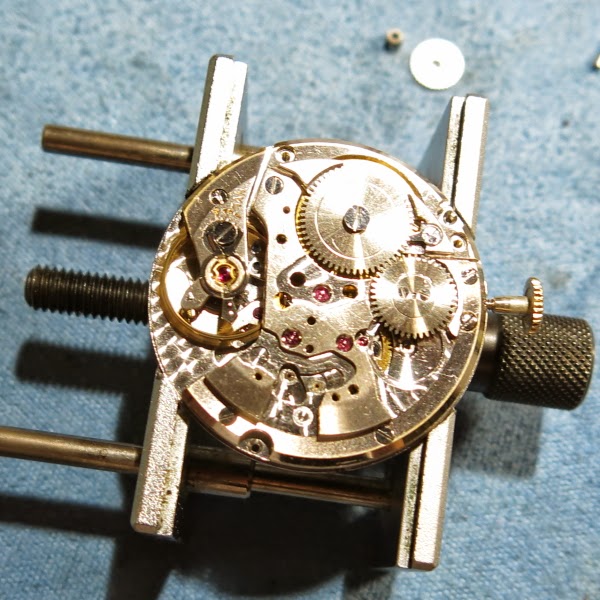 It's running just fine, without any tweaking whatsoever. 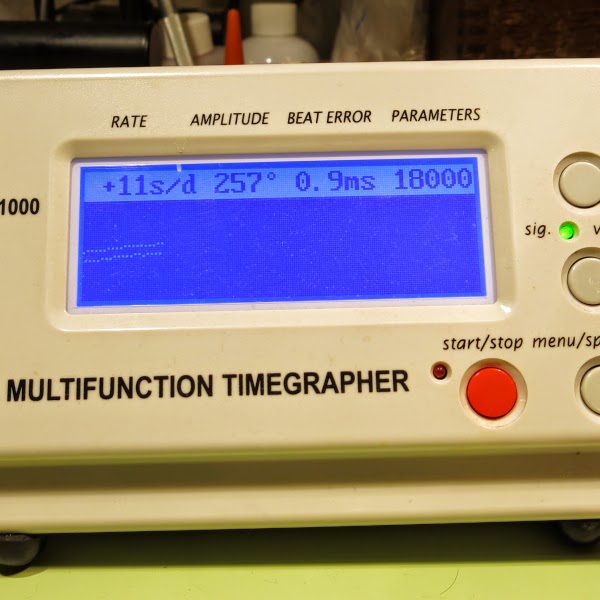 A new crystal is an inexpensive way to dramatically improve a watch's appearance.  I almost always replace the crystal with a fresh one - although slightly-used plastic crystals can also be polished easily to look like new. 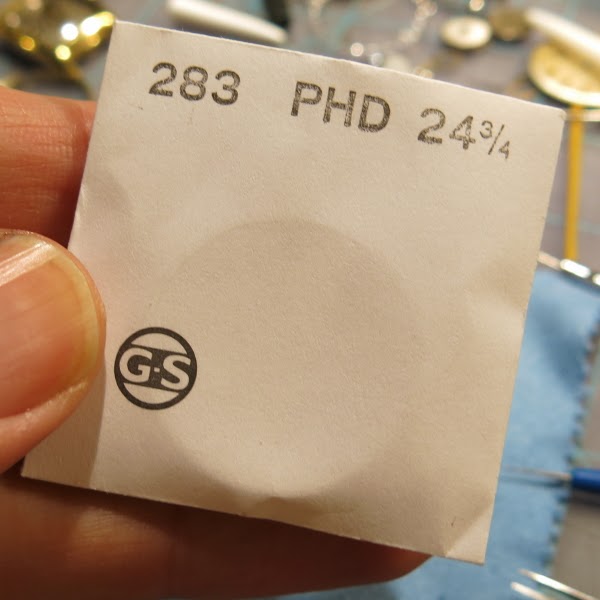 The movement, sans-weight, is reinstalled in the case along with it's movement ring to hold it securely.  I like to put the oscillating weight on last - as it's a little harder to handle when it's installed outside of the case.  This way, everything is nice and secure. 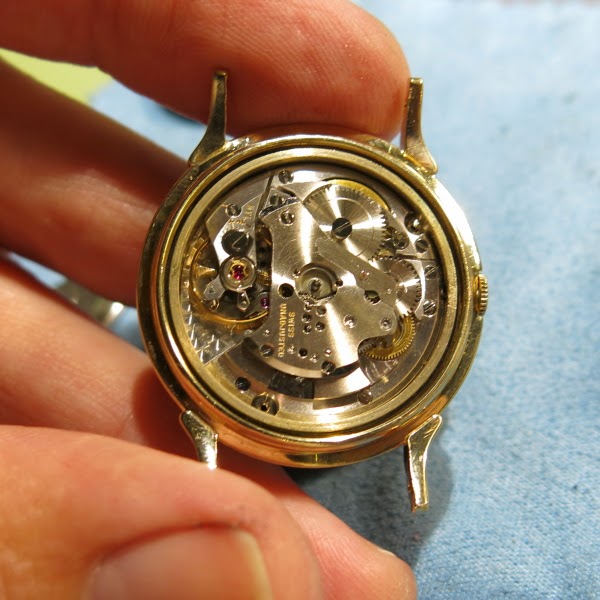 A better-fitting, genuine lizard strap completes the restoration.  I removed the remaining radium from the back of the hands using my ultrasonic cleaner.  So although the dial still shows a very faint radium burn, there will be no further damage.  The silhouette aspect of the watch has been lost to time and modern luminous material doesn't work the same way - so I'll just have to enjoy looking at this watch in the light. 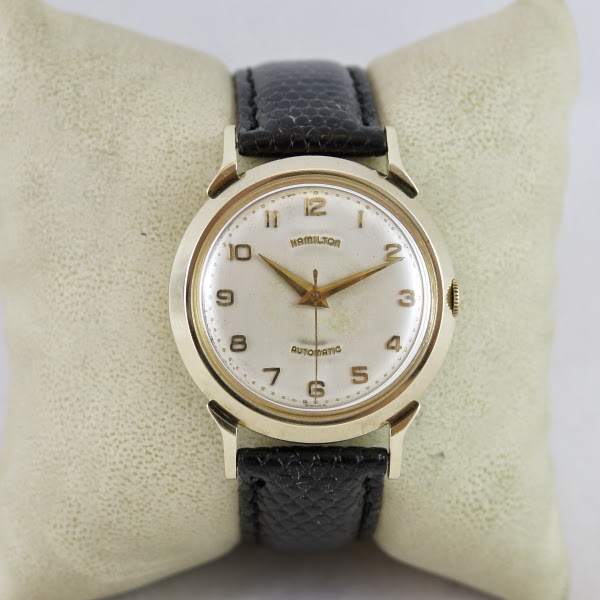