There's a miniature mystery that I've been trying to solve for a few years now and I'm slowing getting closer but I don't know if I'll ever solve it definitively.

The Accumatic VIII was introduced in 1959.  It was made for two years and then replaced by the VIII-B.

Typically a B-model is a watch that looks identical to another model, but the case is different in order to accommodate a different movement.  So you will see B models when Hamilton transitioned from 14/0 movements to 12/0 movements, like a Boulton / Boulton B.  You'll also see them when excess Illinois movements were used before Hamilton adopted Hamilton-branded Swiss movements, e.g. Jason / Jason B.  And you'll even see B models when different US-made grades were used like a 8/0 size 747/730 and the 12/0 size 770... for example the Parker and Parker B.  The key difference is the case has to be different to accommodate the movement.  So when Hamilton moved from the 750, 753 or 754 to the 770, the model didn't become a B since they're all the same size.

So what happened to the Accumatic VIII to justify a VIII-B?  My theory is the predominantly the case design changed but the movement changed as well.

The Accumatic VIII and the VIII-B look identical from the front when viewed in the catalog. 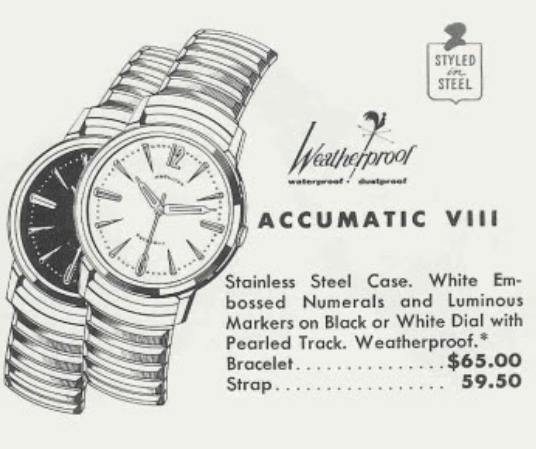 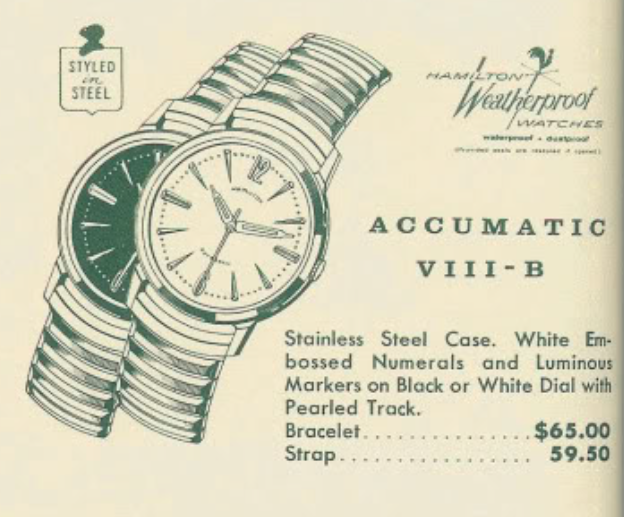 To make things a little more confusing, in 1962 the catalog shows the stylized H on the dial.  That was a good clue that my December 2013 watch was a VIII-B.  The bracelet also changed in 1962 so if one would find an original Accumatic VIII-B with this bracelet, you'd have more confidence of what the -B model is.

Of course, in 1963 Hamilton introduced the Accumatic A-503.  It looks very similar to the Accumatic VIII / B.  However, notice there is more white space between the bezel and the markers and minute track.  I think an Accumatic A-503 and VIII would look different if they were side by side.  It could just be artistic license, but the VIII-B lugs look slightly longer and the A-503 lugs look to have a little more curve with the case.

I recently landed an Accumatic project watch.  I thought originally that it might be an A-503 but now I'm fairly confident that it's a Accumatic VIII.  However, to complicate things a little, notice there's an H on the dial.  Is the dial a replacement or has it been refinished?  The AUTOMATIC is curved and not straight though, so its more of a VIII-B design than an A-503 design.  There is little, to no, white space between the bezel and figures - so that's a nod toward this being a VIII. 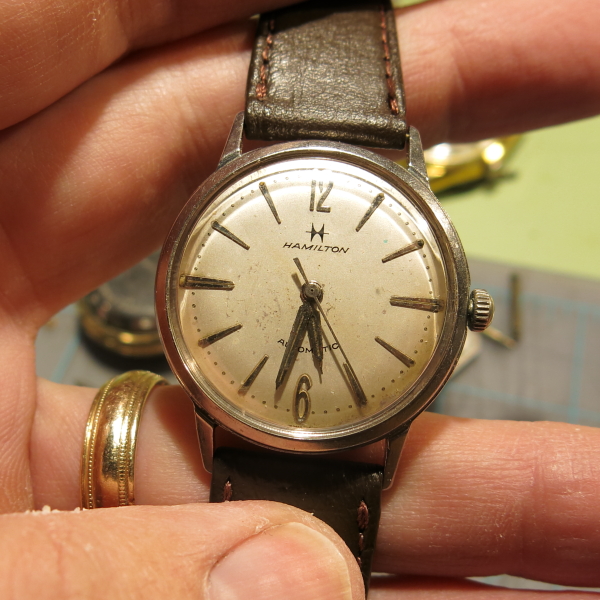 This case is a pop-off back style.  My other Accumatic VIII has a screw off back.  This pop-off design is very-1950's to me, in my opinion.  Lots of models have this sort of design... for example, the Croydon and the Sea-Glo. 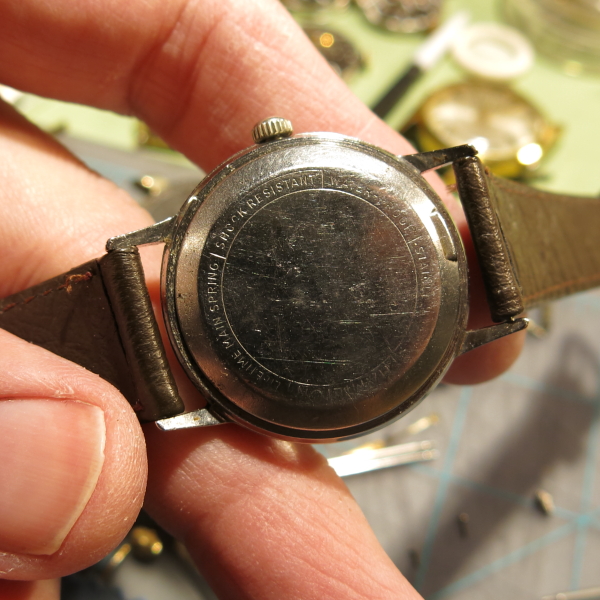 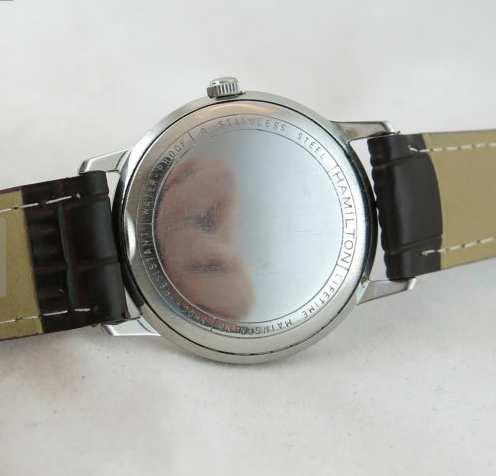 Anyway, back to my project watch.  With the back out of the way, you can see there's a 17-jewel 677 movement inside.  The 677 is not a commonly found movement.  In fact, this is the first one I have see.  This setup and movement ring is different than the VIII-B, which had a 679 inside.  I think you might also find 689 movements in the VIII-B. 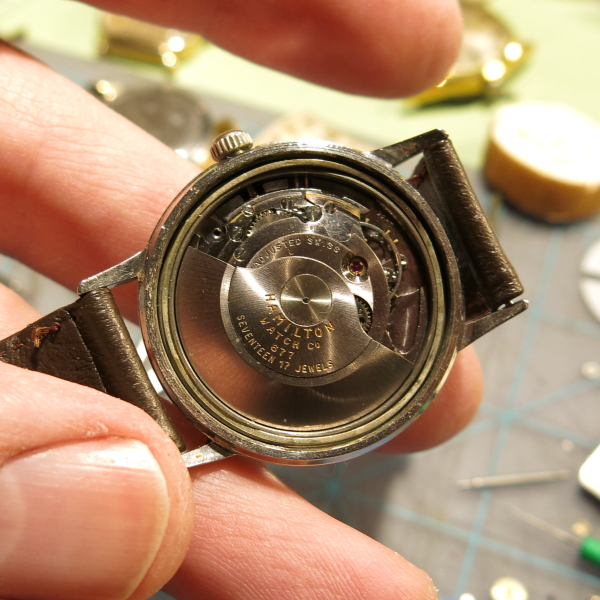 The inside of the case back shows that it was made by Queens.  The VIII-B has a case back that says it was made in Germany by a company with KJ and an arrow going through it. 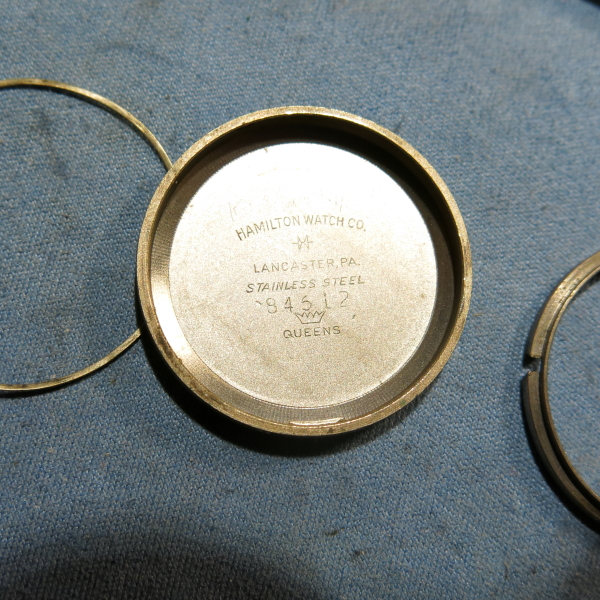 While everything is being cleaned in the ultrasonic, I will buff the case to get rid of the dull haze the case has from being beat around for 50 years. 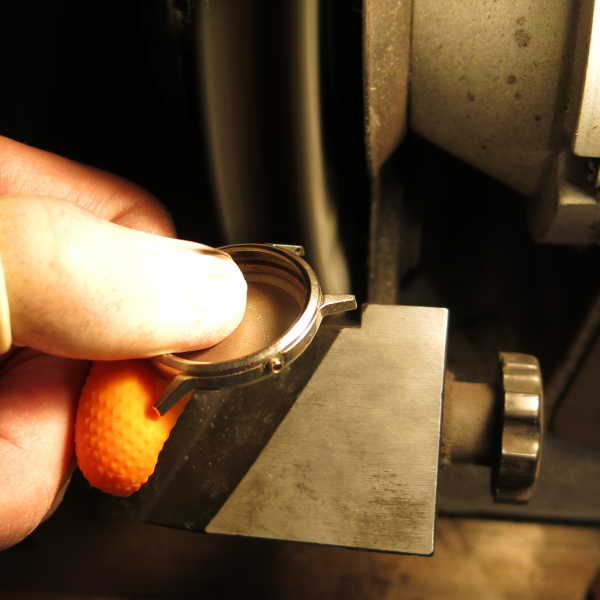 The 677 movement is based on the ETA 2465, as stamped on the main plate.  The 679 is also based on the 2465 but there are some slight differences between the grades, the style of the balance cock and shock jewels, for example.  The 689 replaced the 679 in the early sixties and I would wager that is what you would find in the A-503. 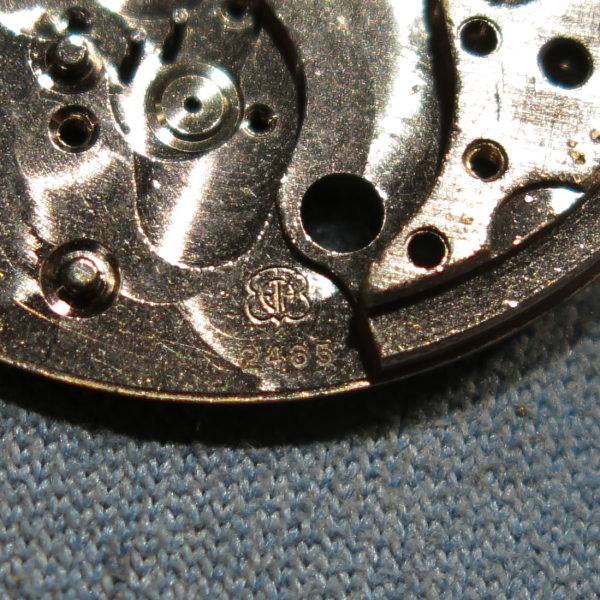 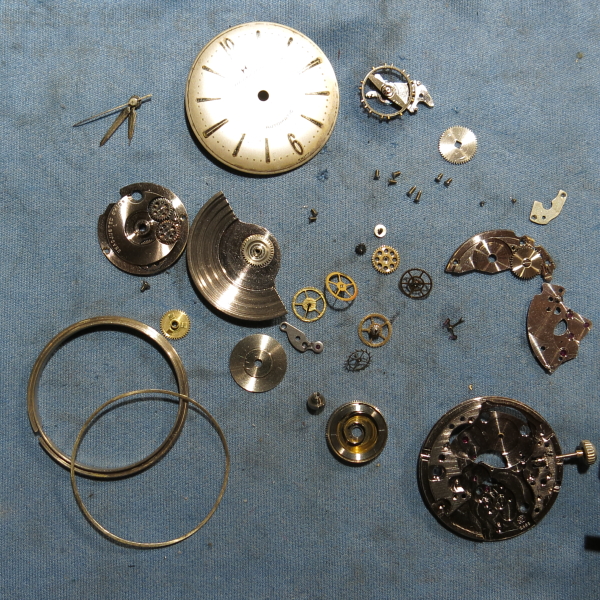 One of the trickiest parts of getting this movement back together is to get the 4-wheel train bridge to settle down in place.  All four wheels have be perfectly aligned before the bridge will drop in place.  Any force at all will break a pivot... so all it requires is good eyesight, a steady hand and a lot of patience. 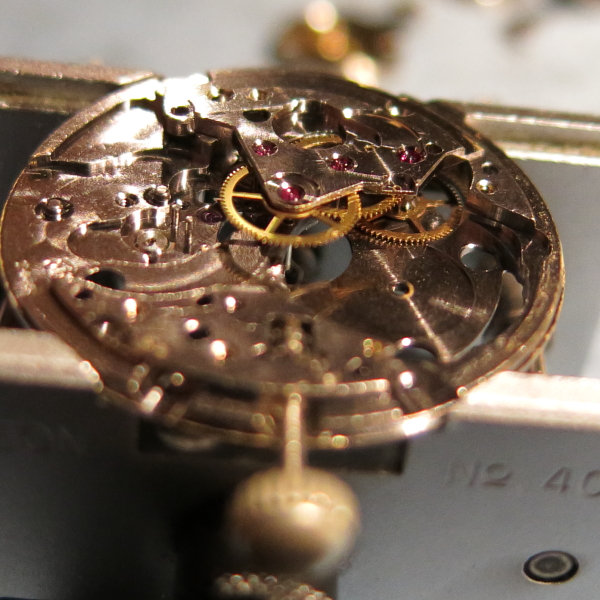 Once the train bridge is in place, I can position the pallet fork and it's bridge.  It's best to put this on after the train wheels - so the escape wheel doesn't damage the pallet jewels. 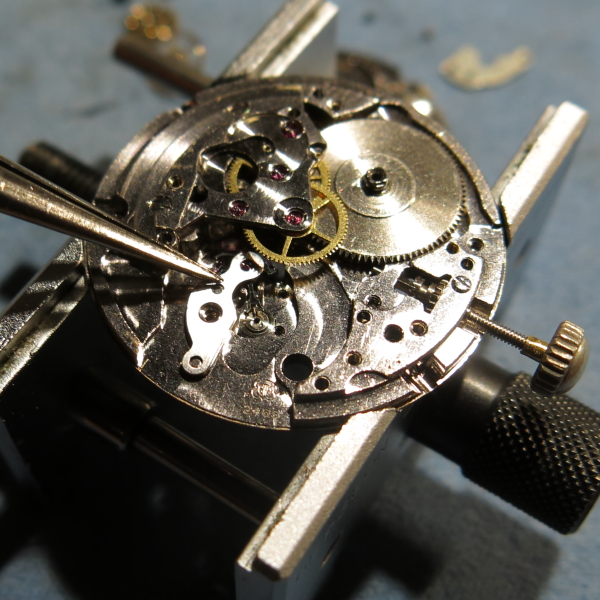 The barrel bridge goes on next and once the ratchet wheel is secured to the barrel arbor, I can wind the watch. 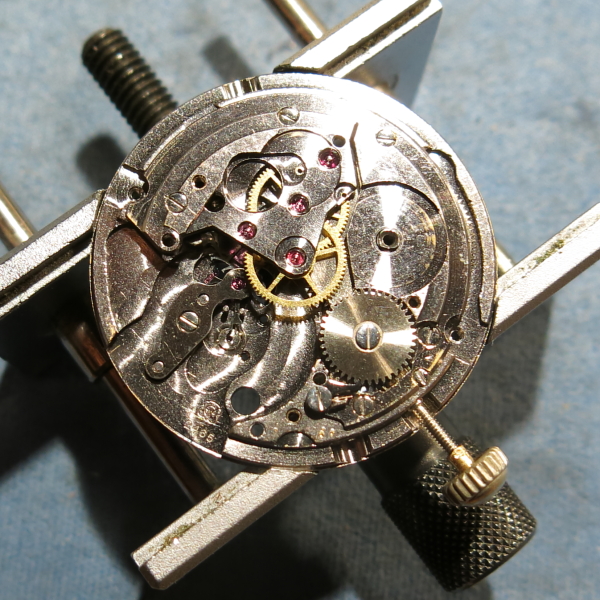 With a little energy stored in the mainspring, once I position the balance in the right place the watch will come back to life.  It's running nicely to my eye but only the timer's ears will tell me for sure what is going on. 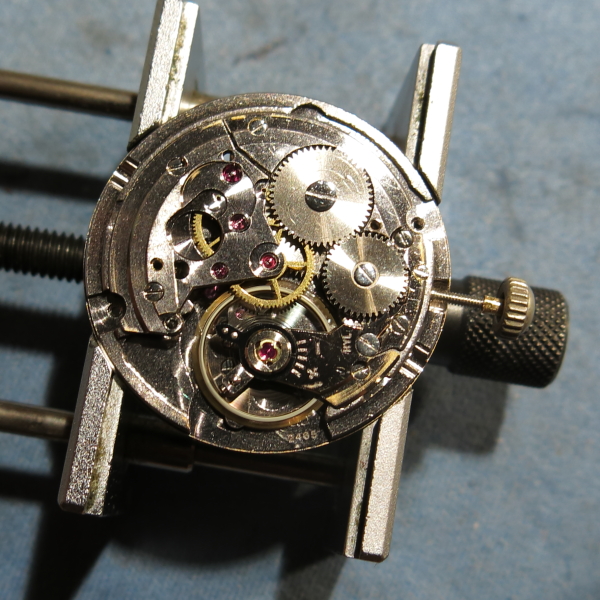 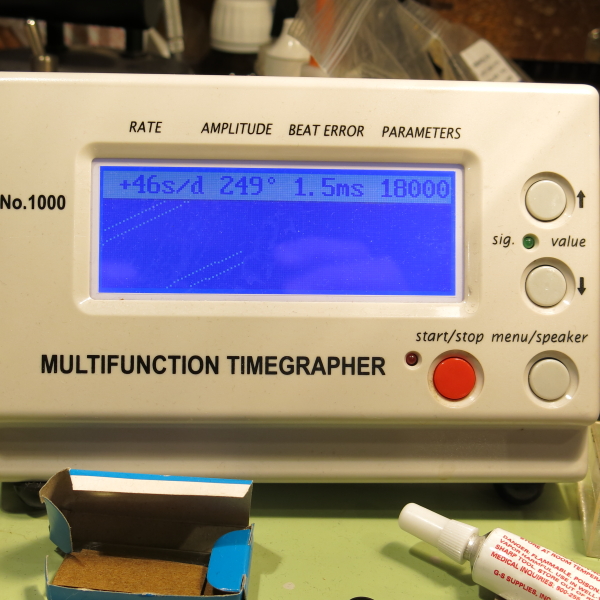 A very small tweak to the regulator slows the watch considerably.  My finger is pointing to the moment in time where I made the adjustment.  You can see the slope of the two lines decrease accordingly.  I'll leave it running just a little fast for now... it will slow down after a little while. 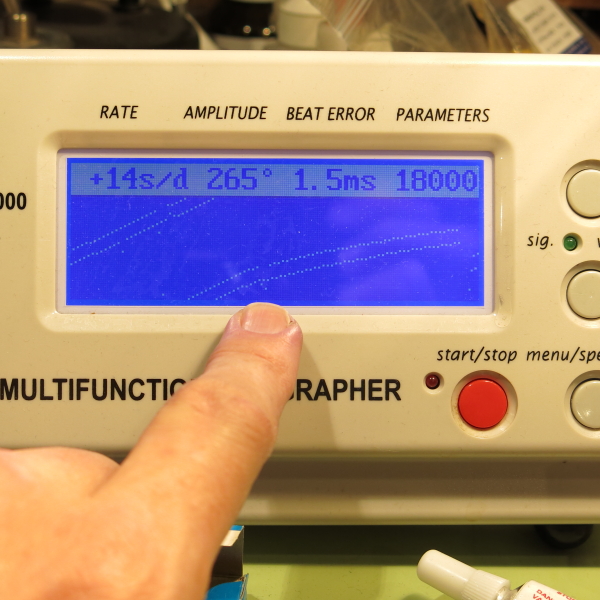 These ETA automatics typically have a special style of cannon pinion with a golden wheel around it.  The wheel is driven by the 3rd wheel pinion.  A little oil is applied to the intersection of the ring and the cannon pinion, as the two parts slide against each other when you set the time. 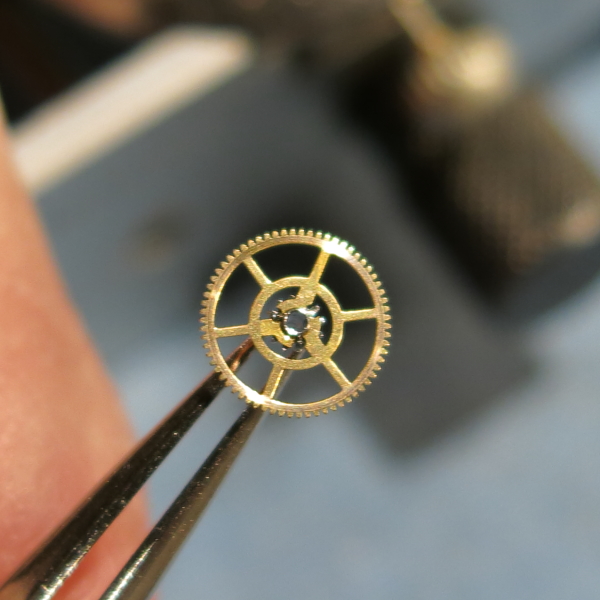 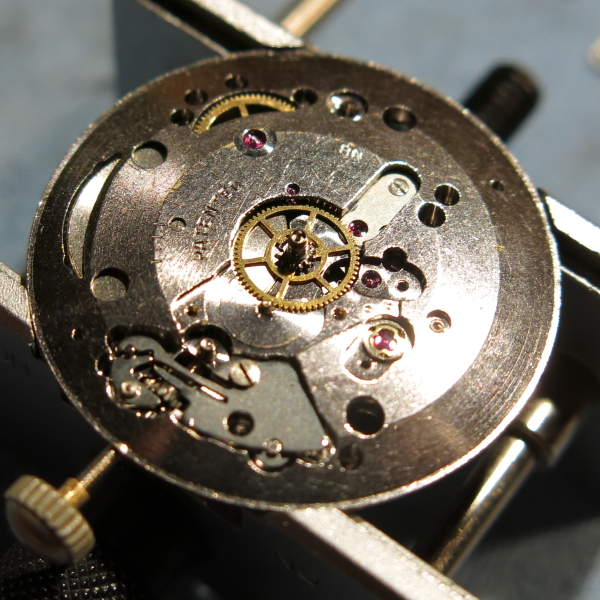 The oscillating weight and carrier all need to be lubricated before being attached to the back of the movement. 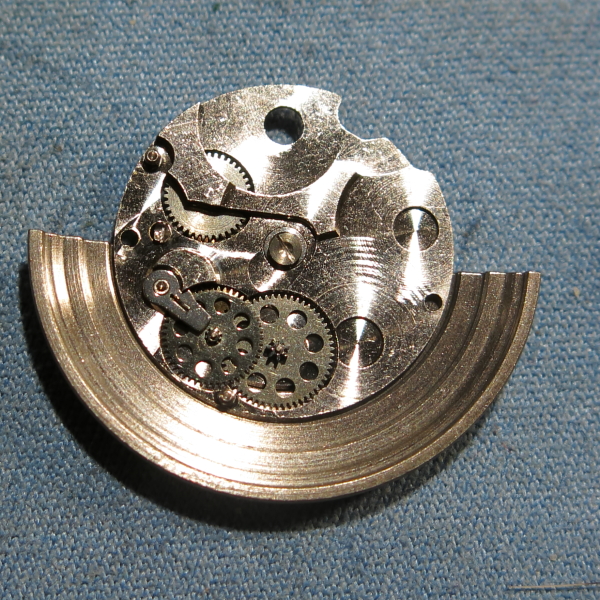 Time to put the dial on. 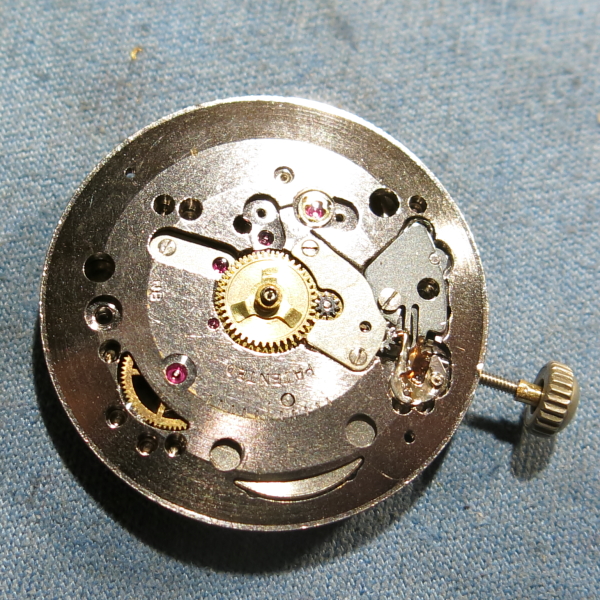 The surfaces of the stem all get lubricated with microgliss grease. 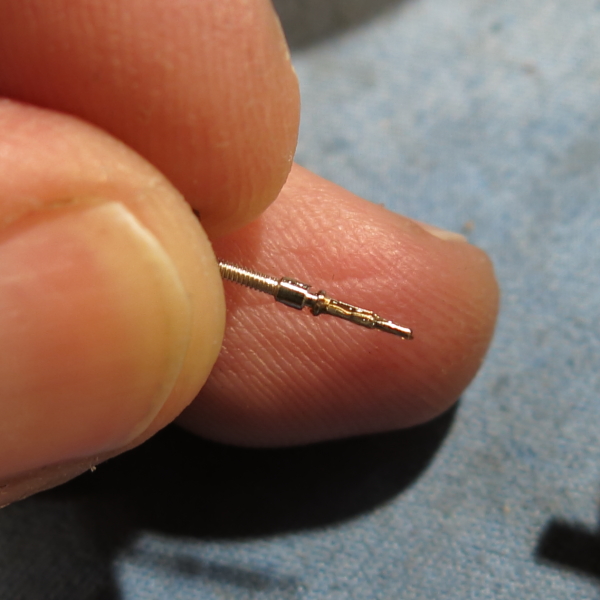 Oops... I accidentally put the dial on upside down and turned this into a left-handed model.  Hamilton actually marketed some  sweep second models in left-handed versions so the crown was at the 9 position instead of the 3.  You'd like to think that was a specially designed nuance but most of the time you just have to flip the dial 180 degrees.  That's not true with all movements but it's true with many of them and definitely with this one. 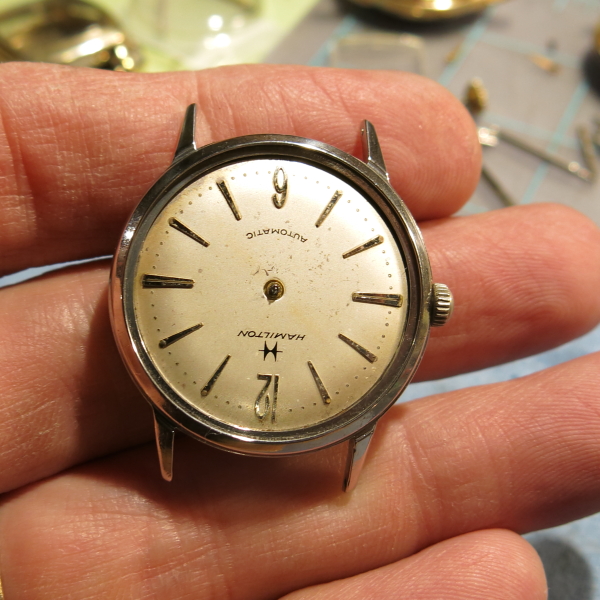 There, that's better.  Now to put the hands back on. 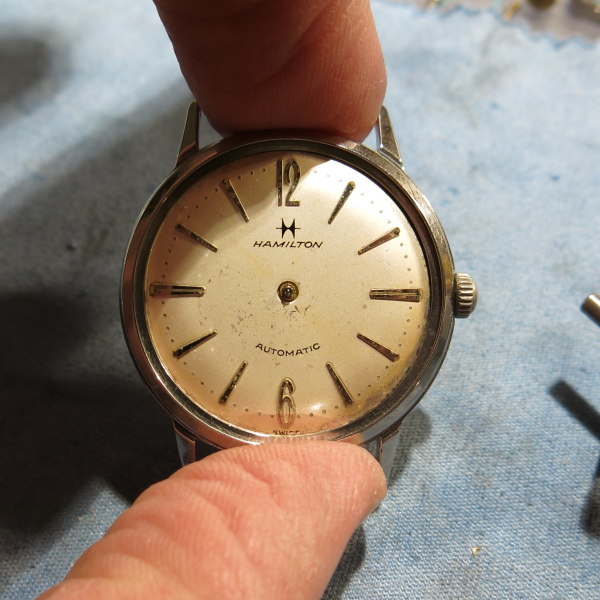 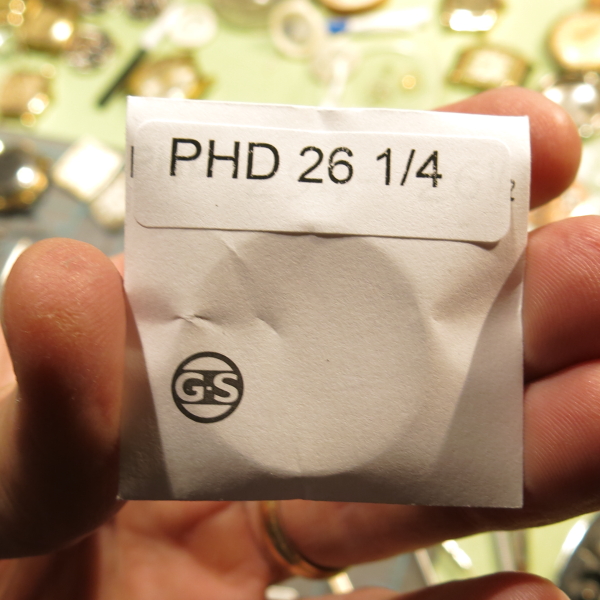 And here's the finished project.  I don't believe the dial is refinish and I'm not sure why it has the fancy H but here it is nonetheless. 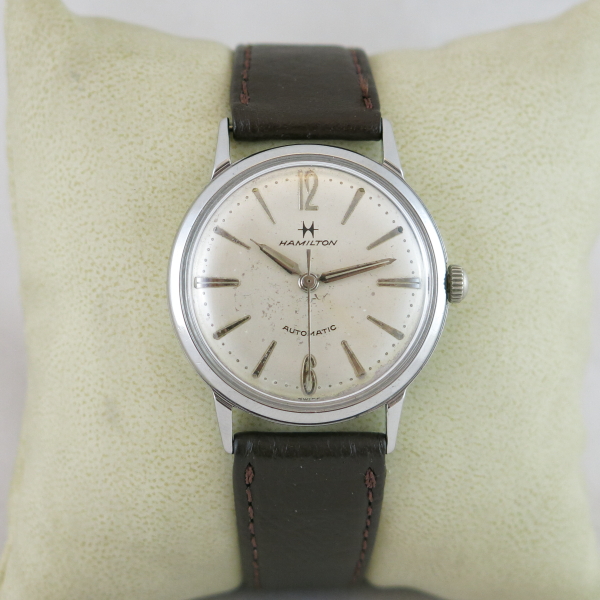 Here's the VIII-B (left) next to the VIII.  They look identical from this side. 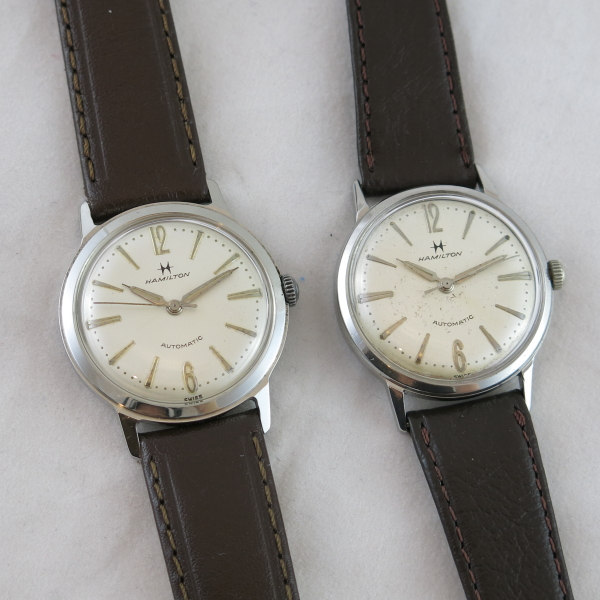 Flipping them over, you can see the VIII-B (left) has a different case design than the VIII.  I guess that's what makes a VIII different than a VIII-B... that and the movement inside. 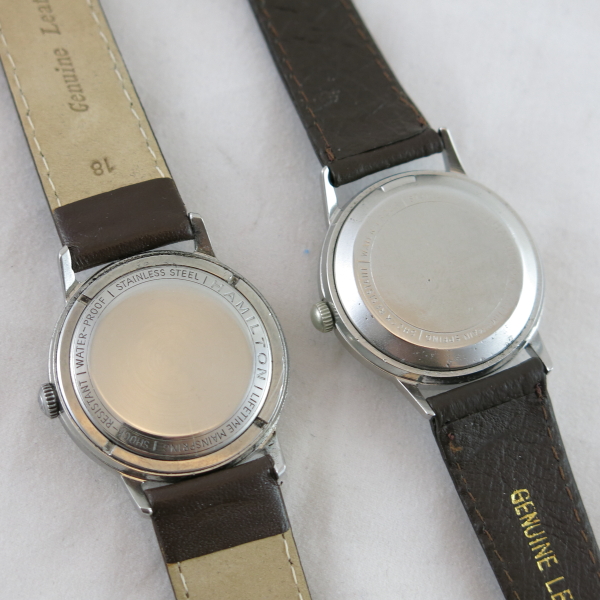 Well, that didn't take long.  Sure enough, one of my crazy bracelet friends sent me a photo of all three versions.  Can you spot the differences? 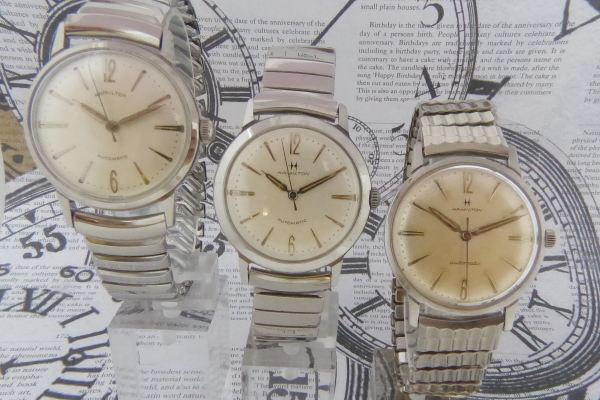 The A-503 is on the right.  It sure looks like an Accumatic VIII to me, at least from the front.

The backs tell a different story though.  As we saw above, the VIII has a pop off back, the VIII-B has a screw off back and the A-503 is a one-piece case.  In addition, if you look really closely, the lugs of the A-503 have a slight curve on the outside edges while the other two cases are straight. 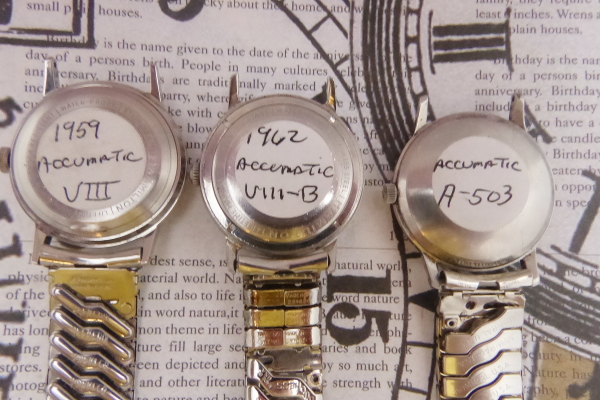