The Accumatic line of automatics introduced calendar models in 1963.  They were called Dateline models but they carried forward the A-series model numbers.  One of the longest produced models was the 1964 Dateline A-577.  It was produced through 1972... a very long run by Hamilton standards. 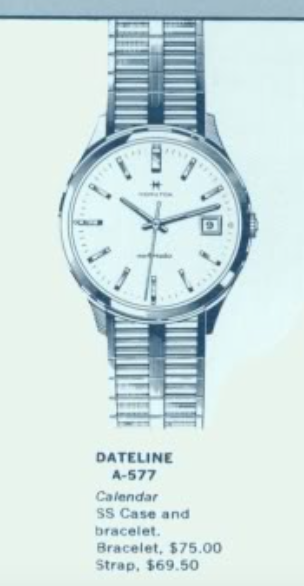 The Dateline A-577 came in a one-piece stainless steel case with your choice of a strap or a stainless steel bracelet.  Tucked inside the case is a 17 jewel 694A movement.  I know that's true for the earlier models but I'm not sure if the 694A was used for the entire time or if the later models used a 64A, which is basically the same movement with 4 extra jewels in the reversing wheels.

I recently had someone contact me about a family watch they received.  Since I hadn't shown it on the blog I agreed to take it on.  As you can see in the photo below, it was missing it's crown. 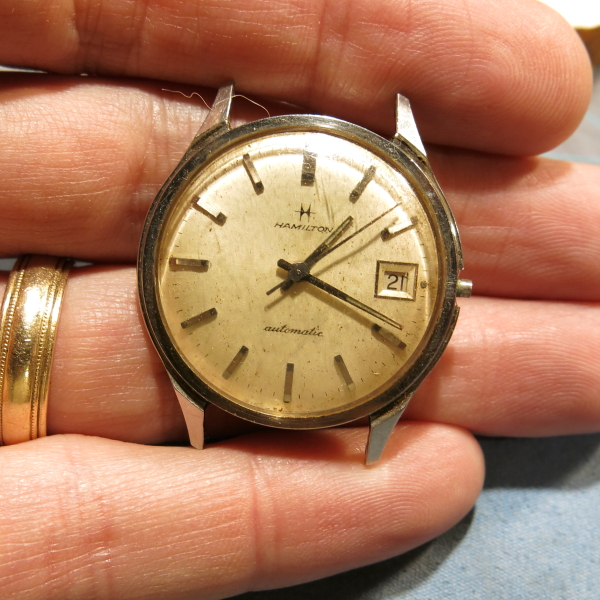 Now I don't know what kind of watch Forrest Gump would have worn but I bet it was a Hamilton, especially after he was a "gazillionaire".   However, I heard that his daddy was a watchmaker and he once told him, "Forrest, life is like a Hamilton watch without a crown... you never know what you're going to get".  Forrest was a little puzzled, but what his daddy meant was when you get a watch without a crown, you really don't know what you will find when you open it up. 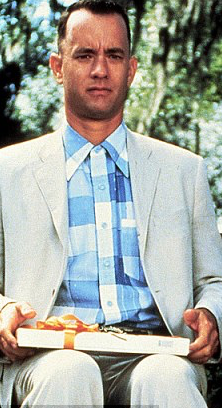 My project watch is a little banged up but stainless steel can take a real beating.  A little polishing and this watch case will look much better. 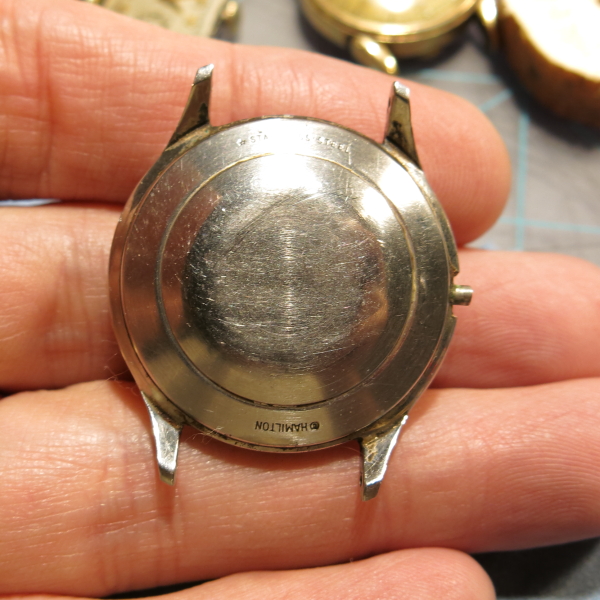 One-piece cases open through the crystal and with the crystal out of the way you can see the dial is a little dirty but not too bad.  The finish on the dial, especially near the crown, looks good so that's a good sign.  If the finish is compromised, that's a sure sign water got into the case. 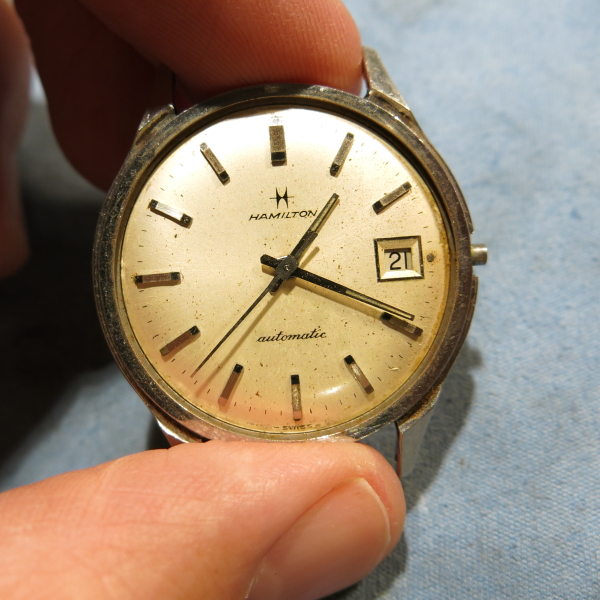 Yikes!  The bad news is water did get into the case.  The two-piece stem is very rusted.  The male section looks good but the female side is shot.  What's more, part of the barrel bridge, crown wheel and balance cock are rusty too. 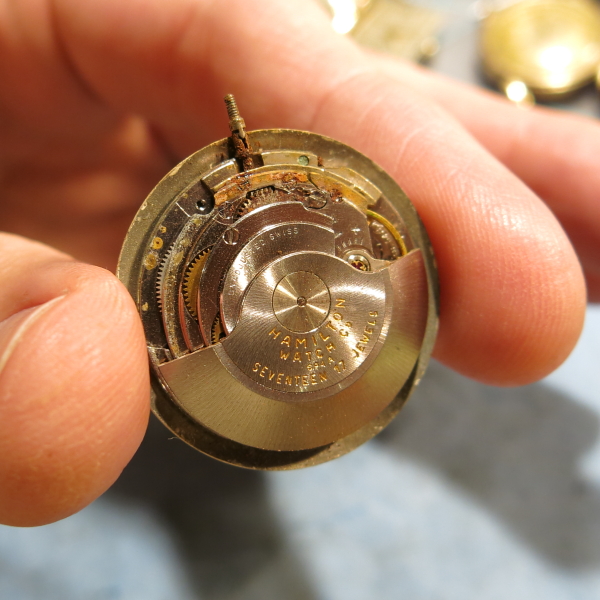 With the oscillating weight out of the way, you can see the damage a little more clearly.  I can barely make out the screws for the balance cock and the barrel bridge.  The set lever screw is all but invisible.  I have no way of easily removing the damaged stem - at least without breaking the screw or set lever.  I'm going to soak this part of the movement with penetrating oil (overnight) in the hopes that I can break the screws loose.  Ideally I'd like to save the balance, as it appears to be okay. 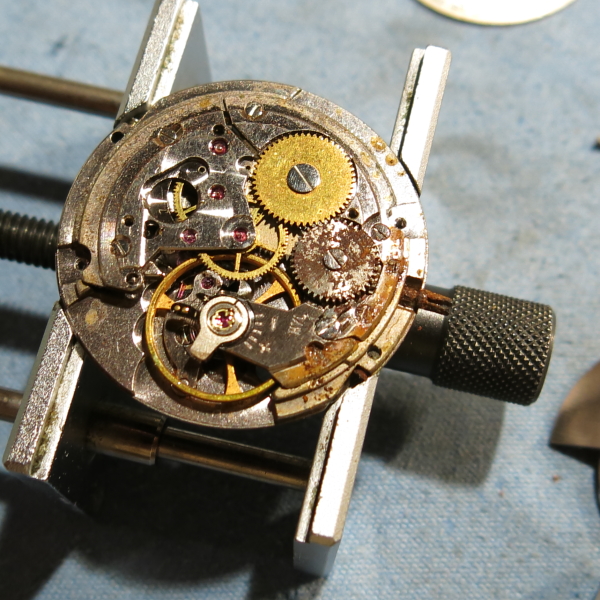 It took some doing but I was able to get the movement apart.  That was good news.  However, the rust took it's toll and I still can't get the stem out.  This movement will need several parts in order to be restored.

Situations like this call for a donor movement and I was able to purchase a non-running 694A with all the parts I need.  It was very dirty... about the dirtiest I've seen in this grade, but there's no rust.  It looked like someone dunked it in WD-40 or something, as it was very greasy... it's no wonder it wasn't running. 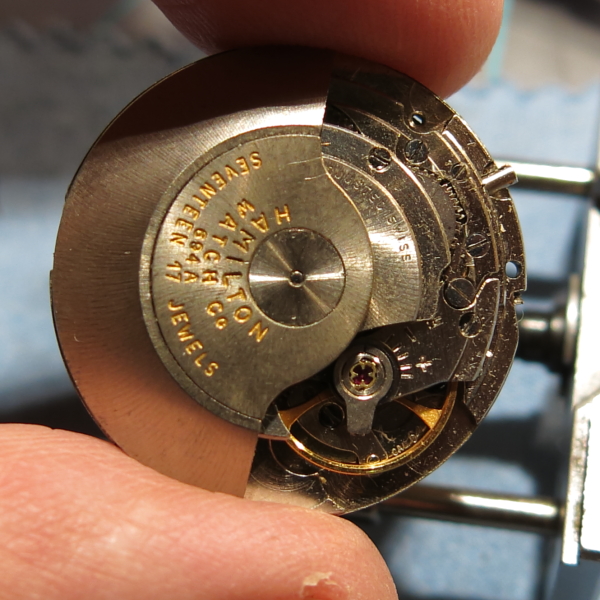 While everything is in the ultrasonic I can turn my attention to the case.  It just needs a good polishing on the buffing wheel. 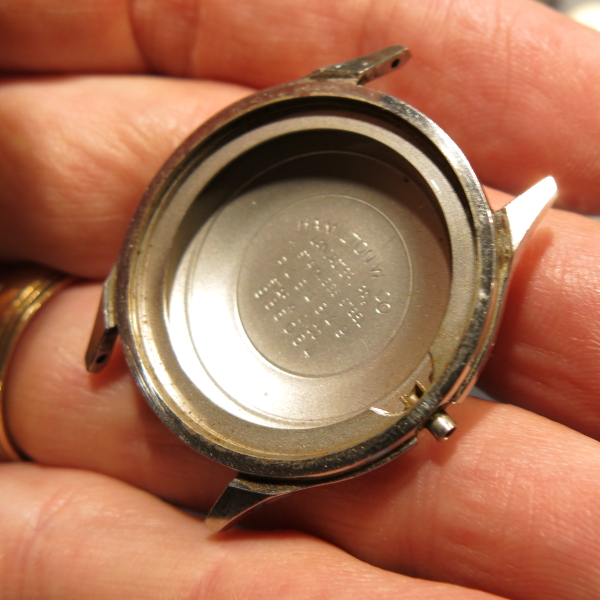 Everything is nice and clean now.  Time for a little reassembly. 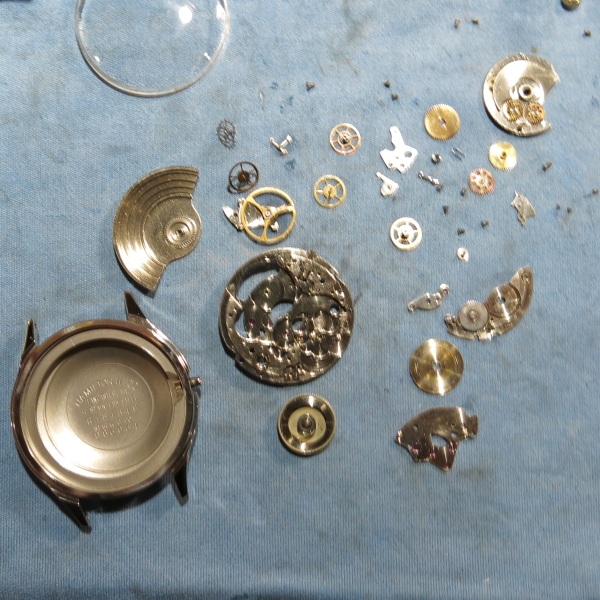 The movement is running nicely... hooray!  Let's see what the watch timer thinks of that. 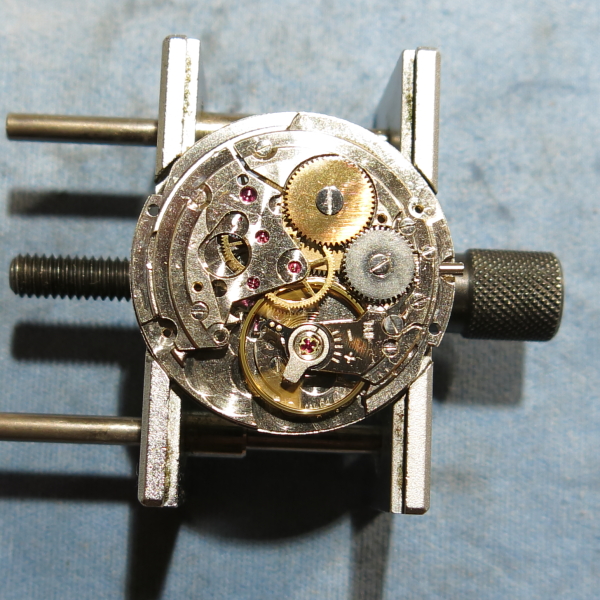 Well, 403 seconds fast per day is little on the fast side... fortunately a tweak to the regulator can probably fix that. 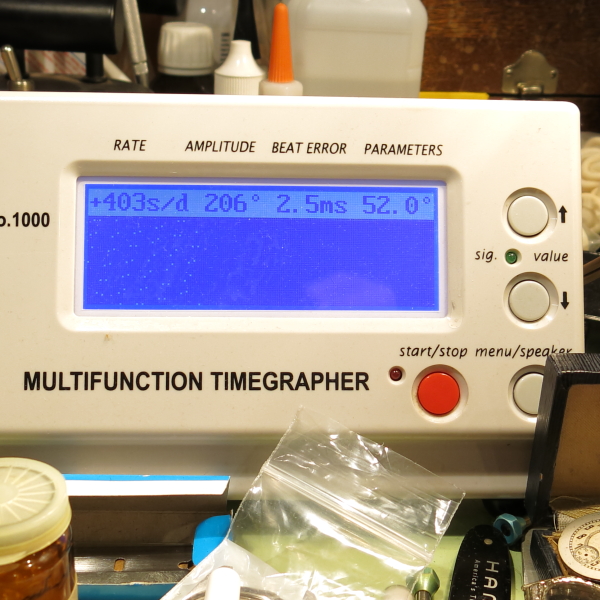 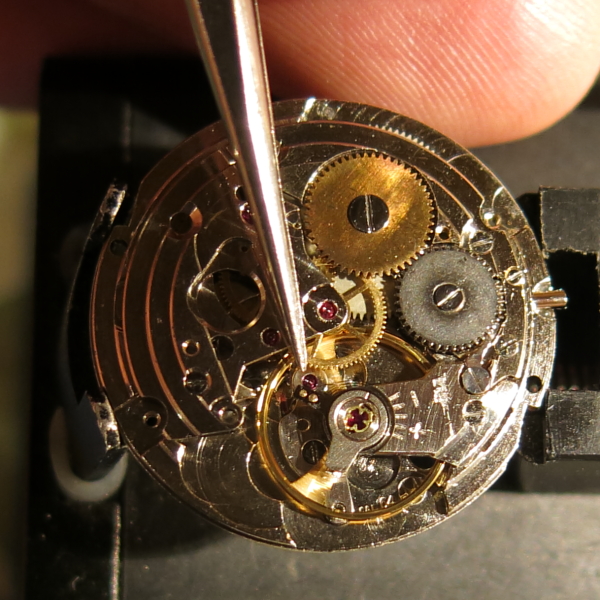 Alright, now that the watch is running just a smidgen fast, I can tweak the hairspring stud location and lower the beat error a little.  I'd be happy with 0.7ms on any other watch but since this model is so easy to adjust, I'd feel guilty if I didn't try to improve it. 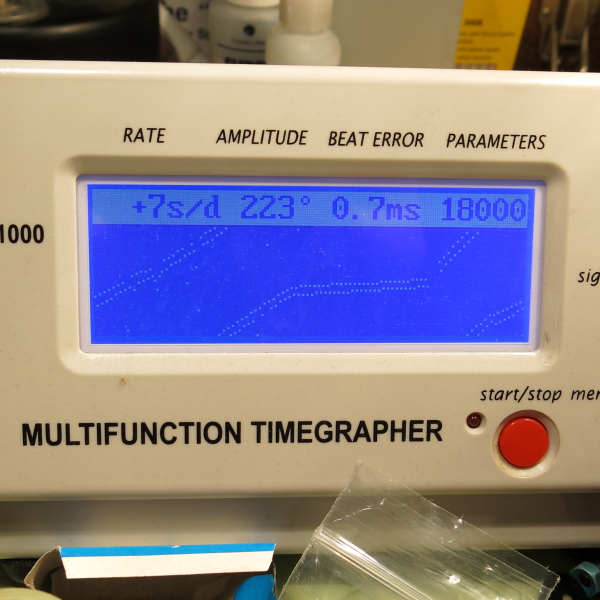 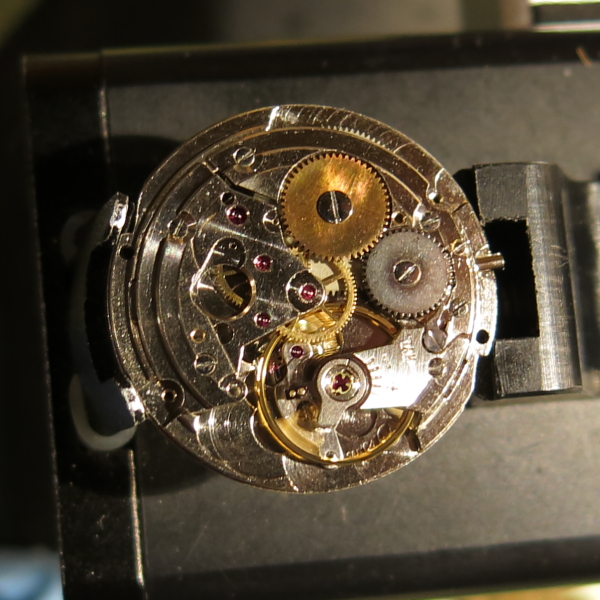 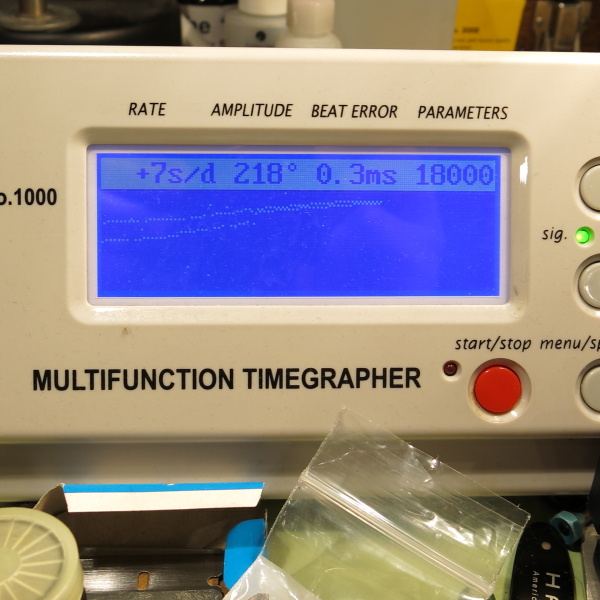 Now I can work on the dial-side of the movement.  There are a lot of parts on this side of the main plate but slow and steady gets the job done. 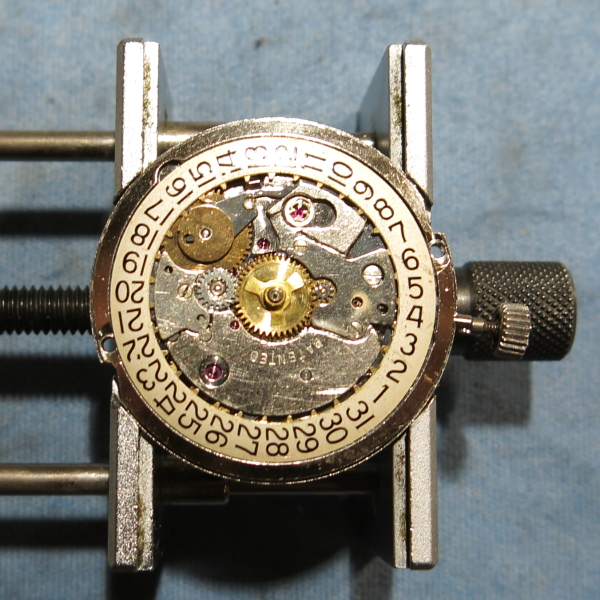 You probably haven't noticed that the two-piece stem in my donor movement is actually shorter than what was in the project watch originally.  Not all two-piece stems are the same.  There is a short version and long version for this movement.  This watch model needs the longer version. 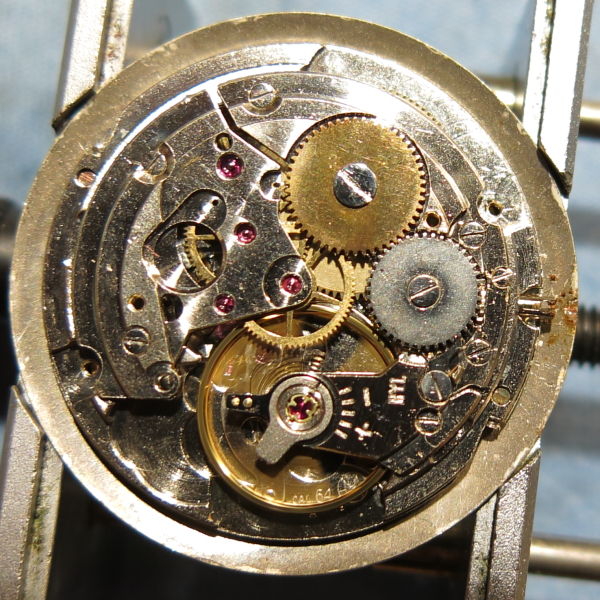 As you can see below, the longer stem is quite a bit longer than the shorter version. 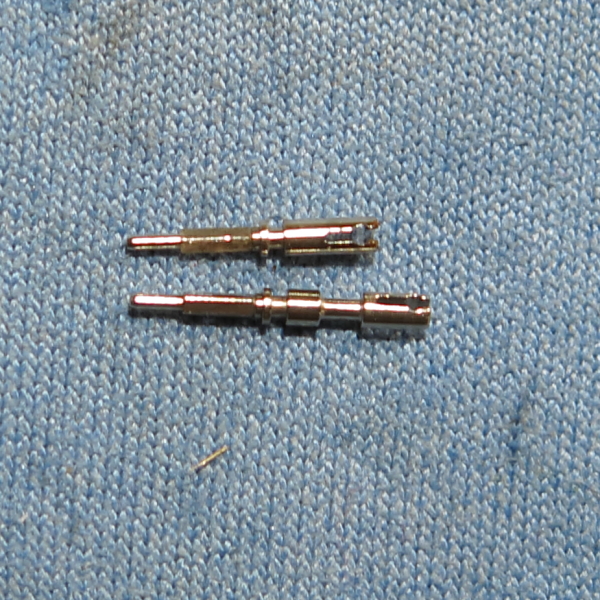 I happened to have a new Hamilton crown that was a perfect fit for the stainless steel case.  So my finished project watch looks no worse for all the wear that it has received.  The owner asked me to not replace the crystal.. so it's a little yellower than a new crystal would be but it doesn't look too bad as is. 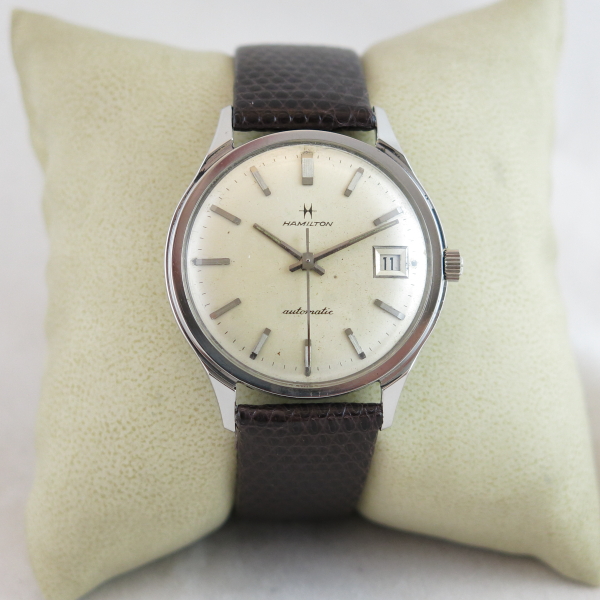