Some of the most popular Hamilton models are the asymmetric models.  They're called that because the cases have unusual shapes.   Although they may be symmetrical in one axis, they look imbalanced in another.  The tops may be different than the bottoms or the left side may not be the mirror of the right side.  Asymmetric models were made with Electric, manual wind and even automatic movements.

Although the genre is typically thought of as being 1950's and '60's creation, the first asymmetric was actually produced in 1930 with model called the Spur.   You might also recall the 1938 Brooke.  However, most asymmetric models are from the 1950's and '60s.

One of the mechanical models is the 1959 Valiant.  It was produced for four years and it was also paired with a woman's model called the Vala as a "his and hers" set. 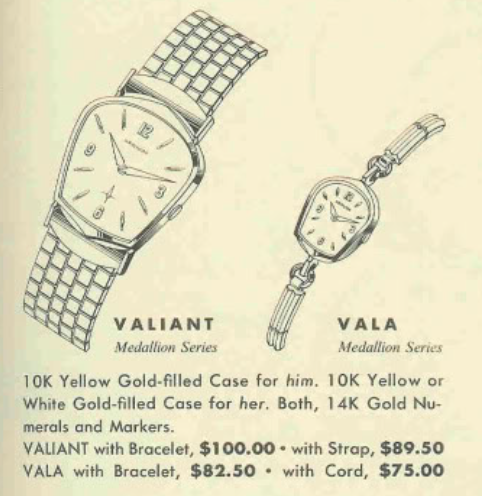 The Valiant came in a yellow 10K gold filed case with a sterling silver dial and 14K markers and numerals.  Tucked inside the case is Hamilton's 22 jewel 770 movement.

I don't think the Valiant is Hamilton's most attractive model.   It has a very odd shape that some folks might think looks cool and that others think is just goofy.   Personally, I wonder if the inspiration for the design and name was the haircut of Prince Valiant? 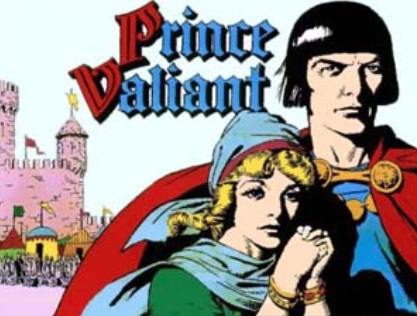 It's also possible the Valiant was the inspiration for the PacMan ghosts.

Beauty is in the eye of the beholder though and the Valiant surely has a place in the collection of anyone who wants to own all of the asymmetric models.

I recently received a Valiant that is a new addition to a fellow collector.  He wanted to make sure it was properly overhauled before using it.  As received, it's in decent enough shape but has some minor issues.  Let's see how many you can spot? 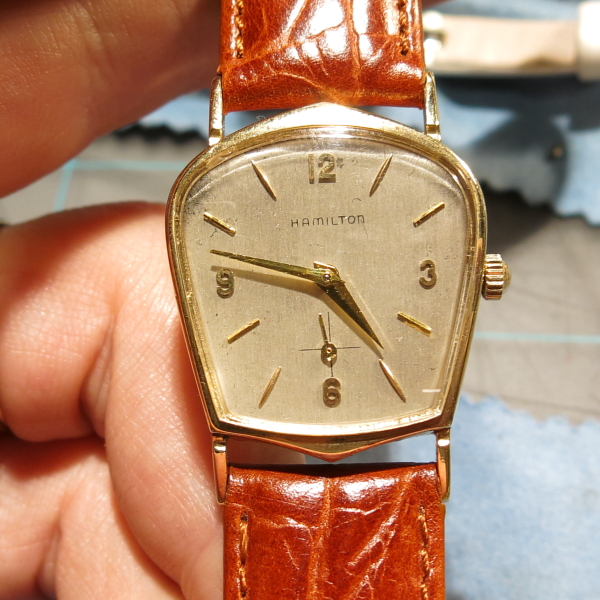 I don't know about you but I noticed the following...

None of those are deal breakers but this watch should serve as a good reminder that details like that can be very important to spot, especially in a retail setting where the price tends to be a little higher and watches are typically "rare and all original" when in reality they are neither.

On the plus side, the case is in great shape.  Dials can be redone, hands replaced, and new crystals installed but a damaged case is hard to overcome.  So, overall, this is a nice watch with "good bones". 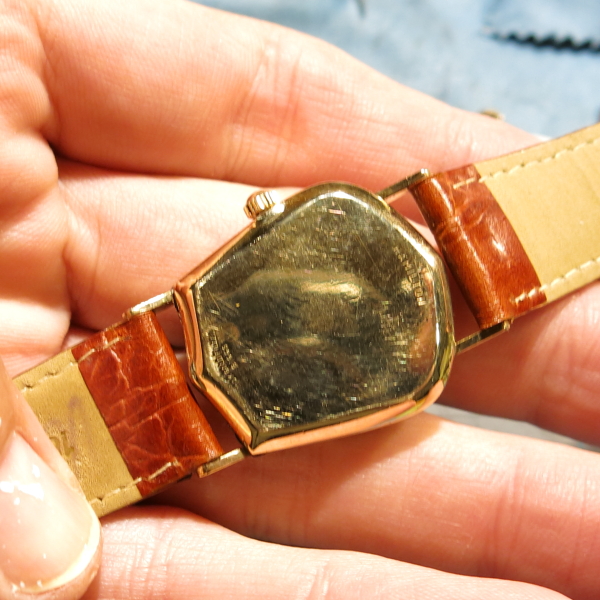 Based on the slight haze to the movement, I'd say it's been a little while since this watch had a trip to the spa.  It's in good shape though and should clean up well. 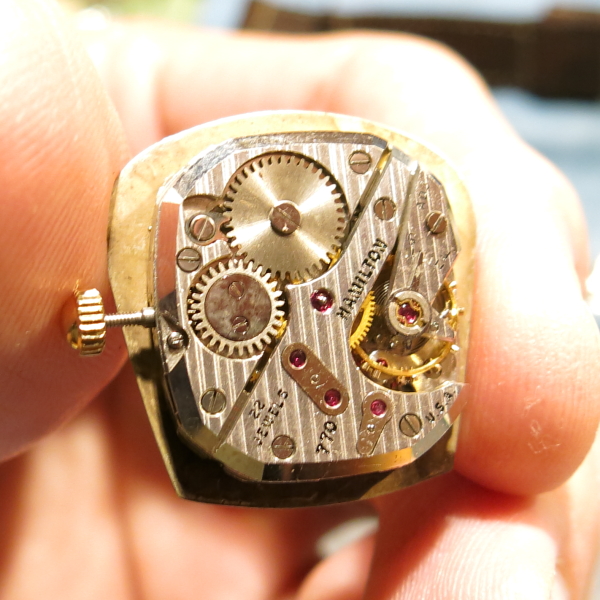 The case has a more brassy-look to it than typical Hamilton cases.  The B with a bee logo is the hallmark for Biggs. 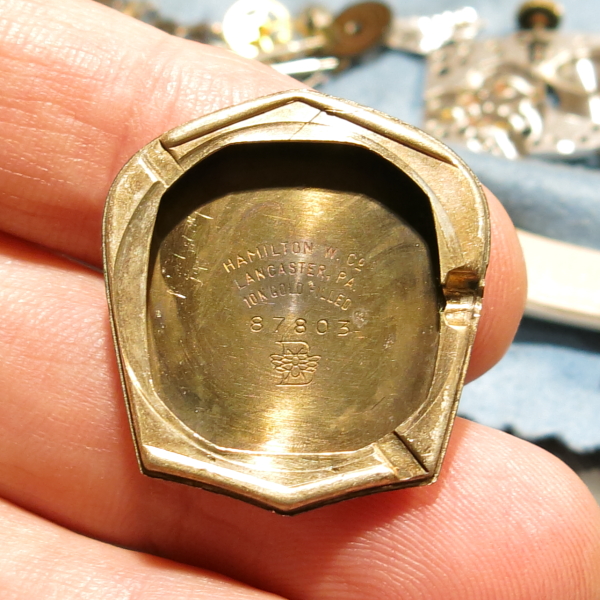 If the details on the front of the dial weren't already a clue, the back of the dial has some numerals scratched in to indicate that this dial has been refinished.  You can just barely see them in the photo, but they're hard to see. 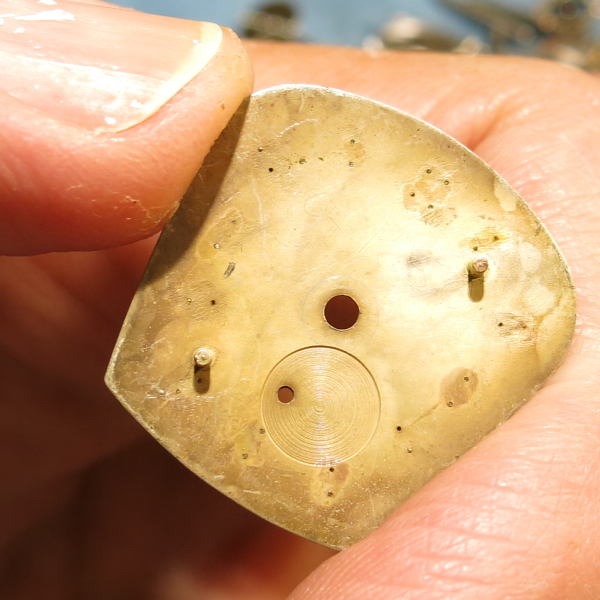 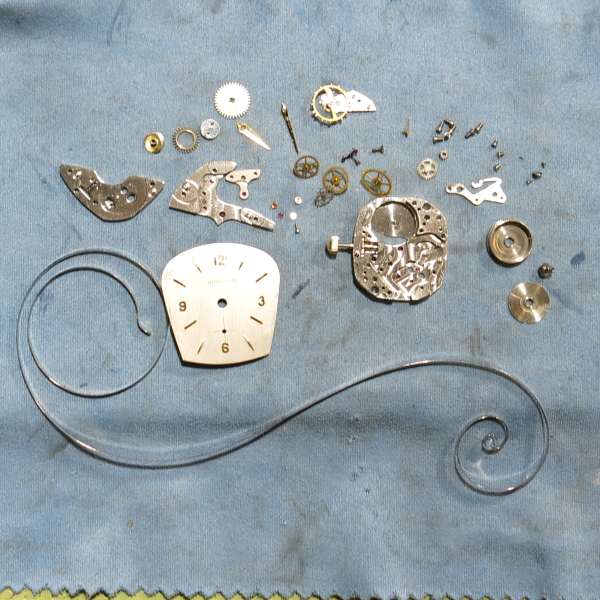 It's always interesting to see the watch's performance pick up when the upper balance shock jewel is reinstalled.  It will run (dial down) without a jewel installed but it's a little wobbly.  Once the upper jewel is installed the watch appears to "kick into high gear" and smoothly accelerate.  It's a great visual sign that all is well. 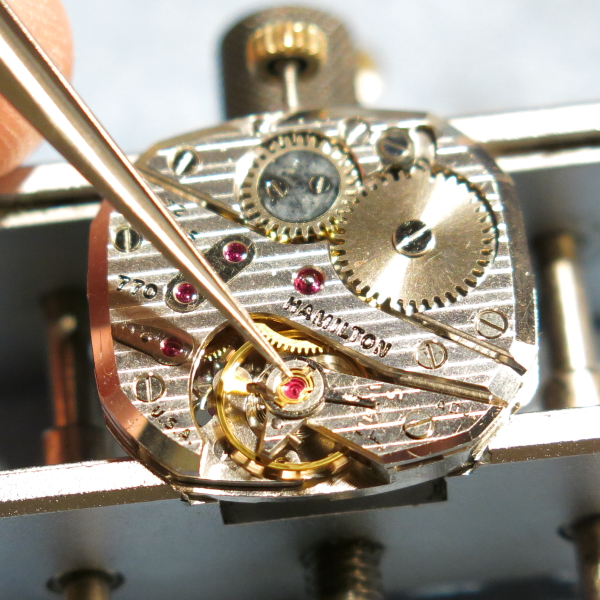 The timer confirms my suspicion that this is a smooth running movement. 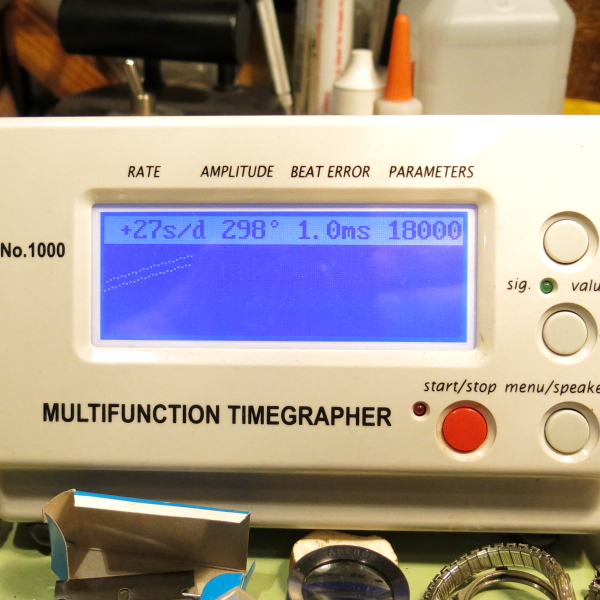 My merciless camera and light tent reveal every flaw and even a few that might not even be there.  However, even with that, this Valiant turned out very nice.  The dial could be redone to look like new and I bet replacement markers could be found too.  Other dials probably use the same markers, so you wouldn't have to find a Valiant dial specifically.  The hour hand looks good and only a purist like me would spot the minute hand.  It took some extra care to position the second hand so that it doesn't hit the 6 figure or the hour hand as it swings past.  Replacing the second hand wouldn't be too hard either. 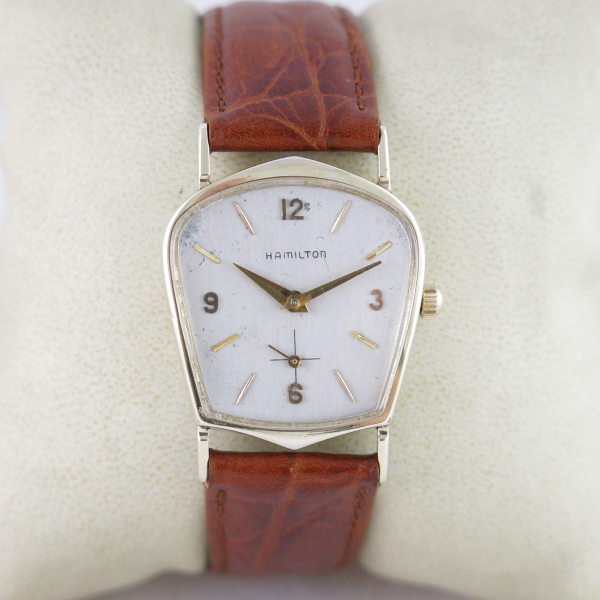 Of course, all of those projects can wait for another day.  This Valiant is ready for some wrist time.