A lot of Hamilton models are named after places and I've lived in a handful of them.  One of them is the Ardmore, named after one of the towns on "the Main Line" outside of Philadelphia that extended all the way through Lancaster, PA and points West.  Another model is the Wayne, also a Main Line town.  A third is the Richmond.  I don't know if that's named after Richmond, Virginia (another place I used to live) or Richmond, PA - a town not too far from Lancaster, PA... probably the latter, I suppose.

Regardless, the Hamilton Richmond was introduced in 1935 and was one of the first models to feature the "brand new" 14/0 size 982 movement.  The 982 and it's 17 jewel counterpart, the 980, enabled Hamilton to make watches that were "curved to fit the wrist.  Both grades would continue to be produced through 1952.  However, the Richmond was produced through 1939. 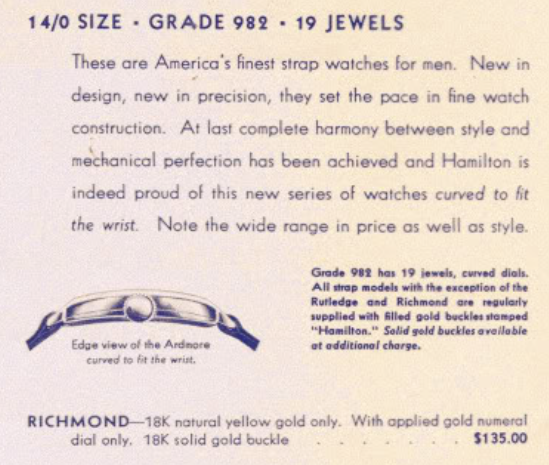 The Richmond was a flagship of the new 14/0 powered models.  It was "top of the line" with an 18K solid gold case and only the Rutledge, introduced at the same time, was it's peer with a platinum case.

Of course, there aren't that many 18K models to begin with.  In fact, there are only 13 different models that were produced in 18K gold.  Most of them are fairly easy to find.  The main exception is the uncatalogued 1927 Rectangular.

I recently purchased a Richmond and although I had to dig a little deeper than my usual project watch investment, I got a good deal for it since it was in need of a lot of TLC. 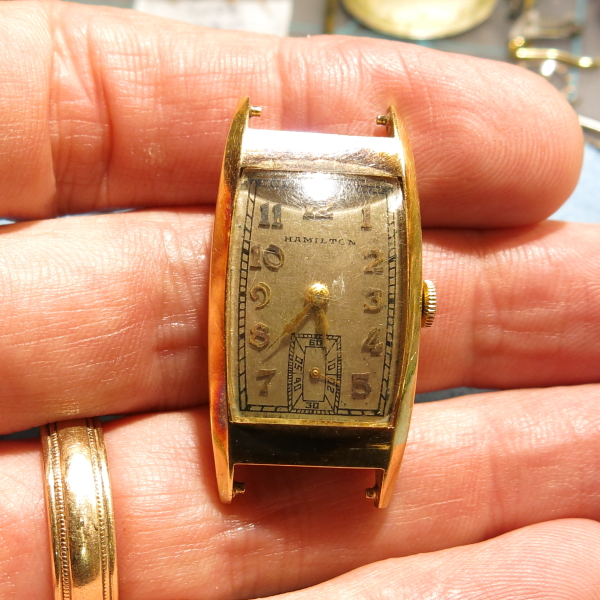 The Richmond has some striking similarities to the 1936 Clark - or should I say, the 1936 Clark may have been a "poor man's Richmond" since the Richmond came first.  The lugs on the Richmond have male pins so you need special female spring bars to mount a strap.  The spacing is 9/16 or 14mm - which is very narrow for a man's watch by today's standards.

The top and bottom of the bezel have an interesting purplish tone.  I don't know what would cause it.  It almost looks like the mark extreme heat makes but I don't think it was caused by heat.  It may be caused by the glue that holds the crystal in place.  Not to worry, I suspect it will polish away easily. 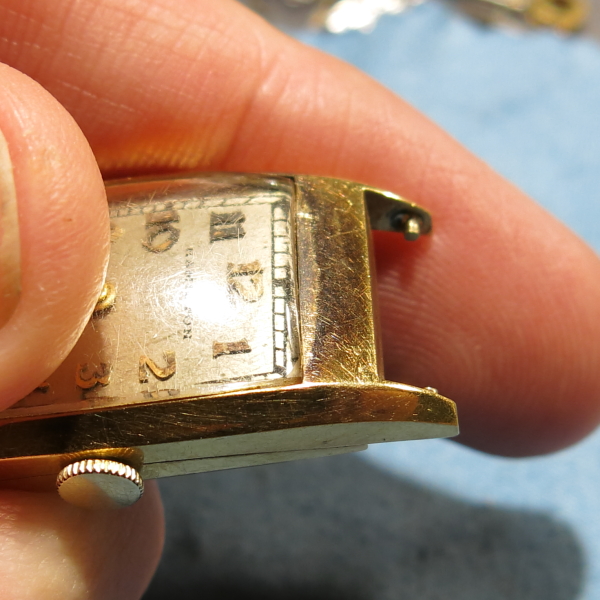 This watch was originally a presentation for a 25 year service award in 1939, making it easy to date the watch. 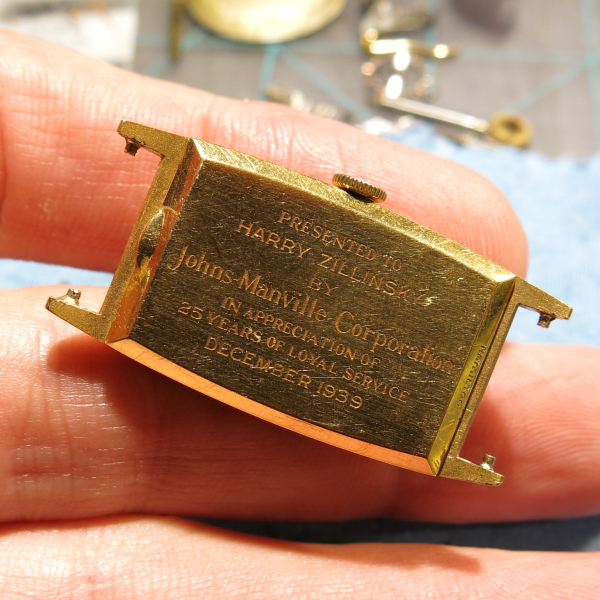 This is an engraved butler-finished dial with black enamel in the engravings.  I bet this dial is original, based on the corrosion marks on the sides but it could also be an old refinish.  This type of dial can be refinished to look exactly like new but there's no reason to do it again - it looks perfectly fine for an almost 80 year old watch.

The hands used on models is an important detail to look for.  The style of hands on the Richmond is called "moderne" and these hands are a perfect match to the catalog hands. 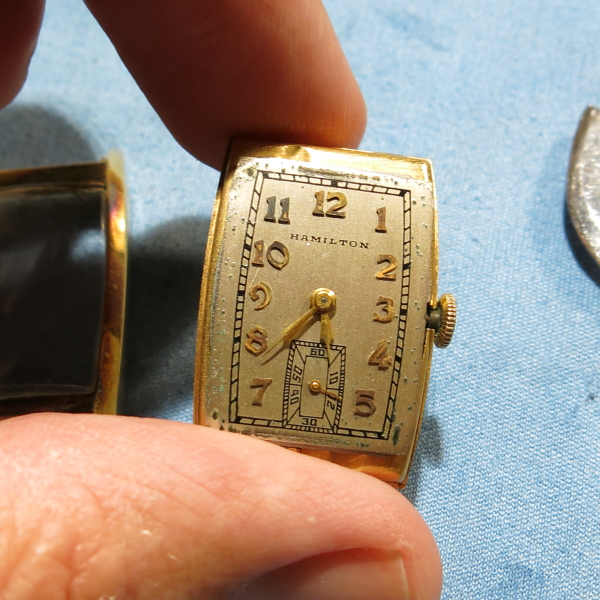 The 982 inside the watch is likely original since it dates to 1939.  It's in nice shape but will get a trip to the spa anyway, since I bet it needs a fresh mainspring. 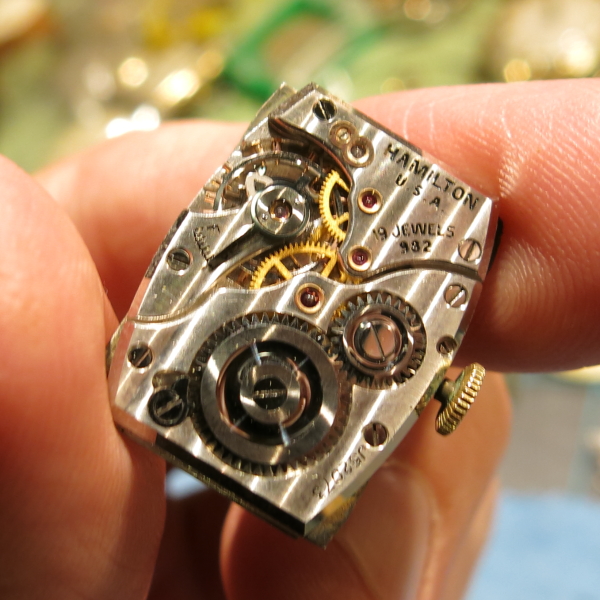 It's not too often that I get to see "18K Gold" stamped inside a case back.  There are a bunch of past watchmakers' service marks inside and I'll add my own before I close up this watch again. 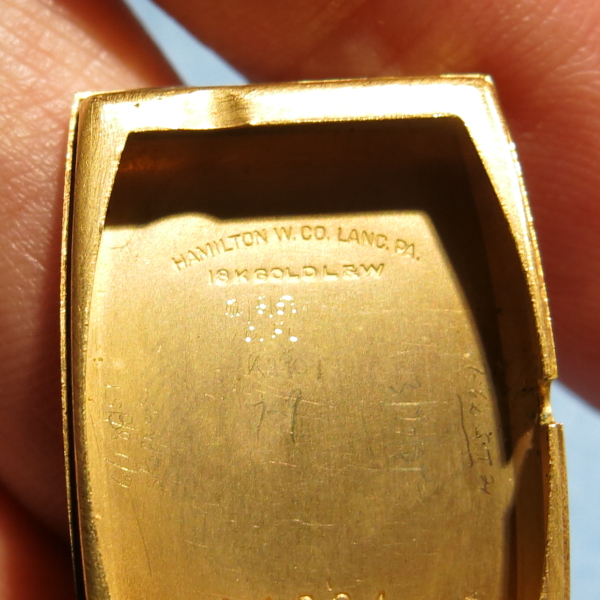 Yup, sure enough, the mainspring is set.  This watch would probably run 12-24 hours on a full wind with a spring like this.  A fresh mainspring will power it for upwards of 40 hours. 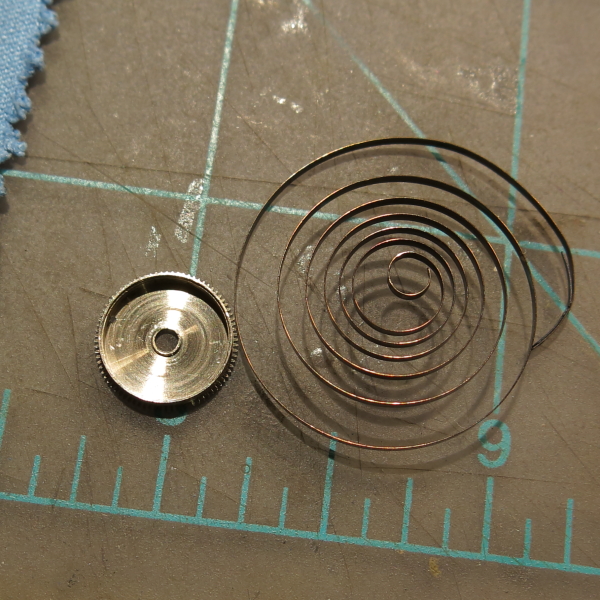 The coil of the mainspring isn't flat either.  This is a good indicator that the mainspring was installed without the use of a winding tool.  It's possible to install a spring with just your finger tips (if you're tough) but you can bend the spring like this while doing so.  This causes the spring to apply pressure to the inside of the barrel and rob the spring of energy from the extra friction created. 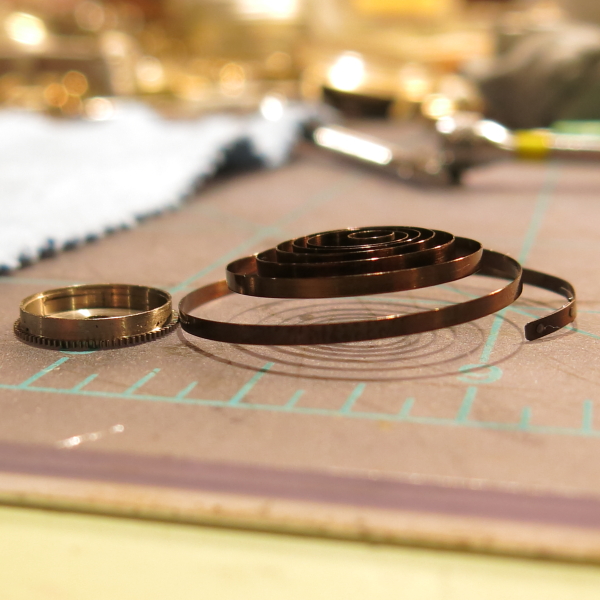 Time for reassembly.  Watches like this are a breeze compared to automatics with twice as many parts. 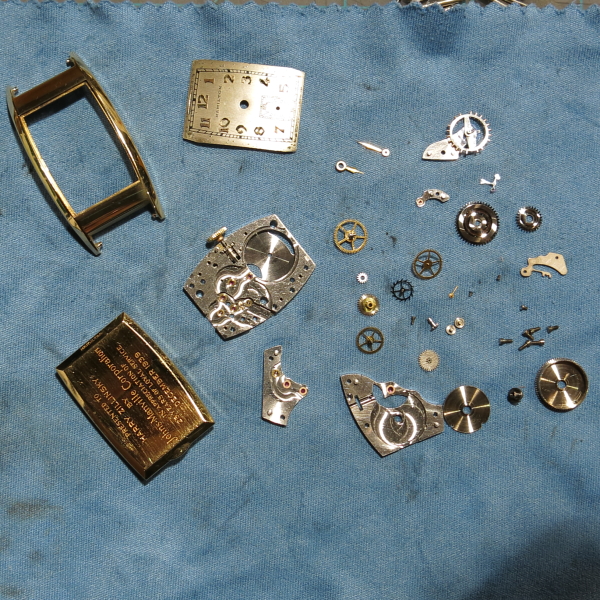 Before I put the movement back together I will install a new glass crystal in the bezel.  That way the UV glue can dry under my UV lamp while I work on the movement.  I use a little UV lamp that is meant to cure the glue used to apply fake finger nails ... it's the sort of thing you'd put your hand under while you gossip about all the ladies in town and who's wearing white after Labor Day. 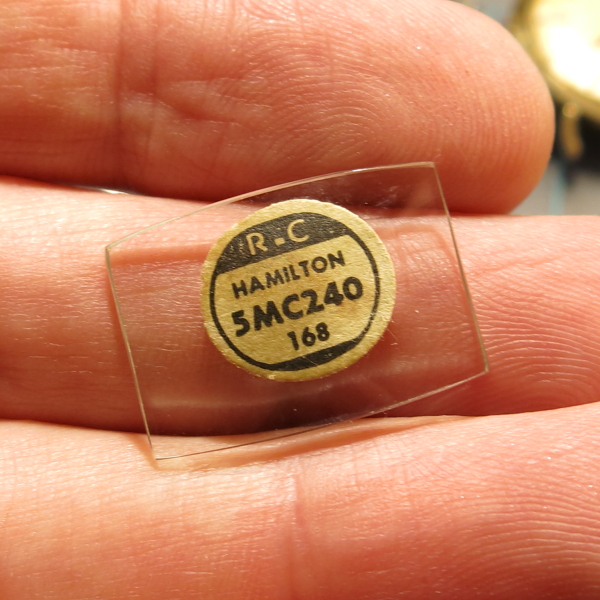 It's always a little unnerving to install the balance on a 14/0 movement.  I'd be embarrassed to tell you how many times I have accidentally dropped the balance cock slip off the side of the movement - turning the hairspring into a slinky.  Patience and great dexterity is needed to get the balance properly in place.  Now the movement is ticking away with good balance motion. 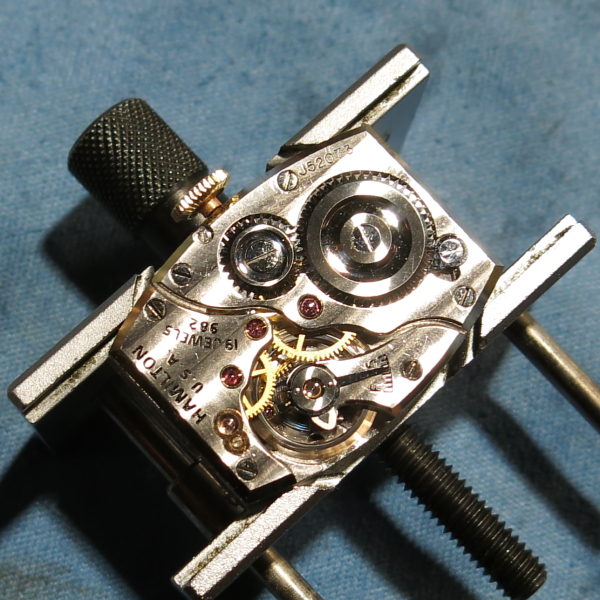 It's running just a little fast but the other specs look great.  A slight tweak to the regulator is all that's needed. 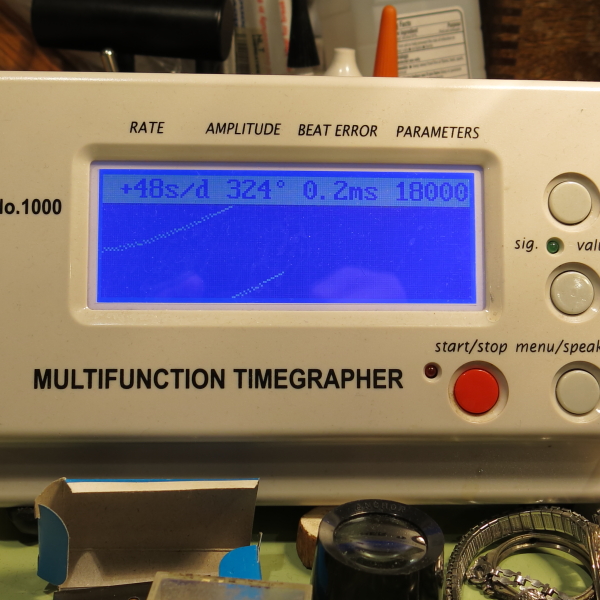 Nothing to complain about this performance. 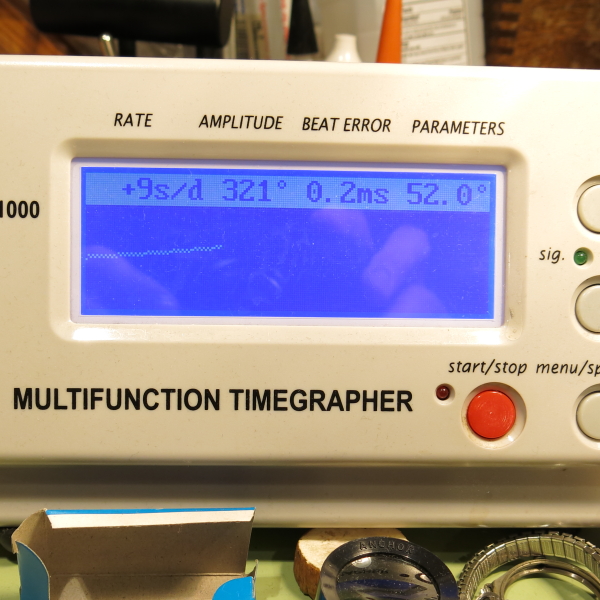 This strap came courtesy of my friend Scott Allison at www.timesofplenty.com.  He has lots of great straps and bracelets for Hamiltons if you're looking for a perfect strap to complement a perfect watch. 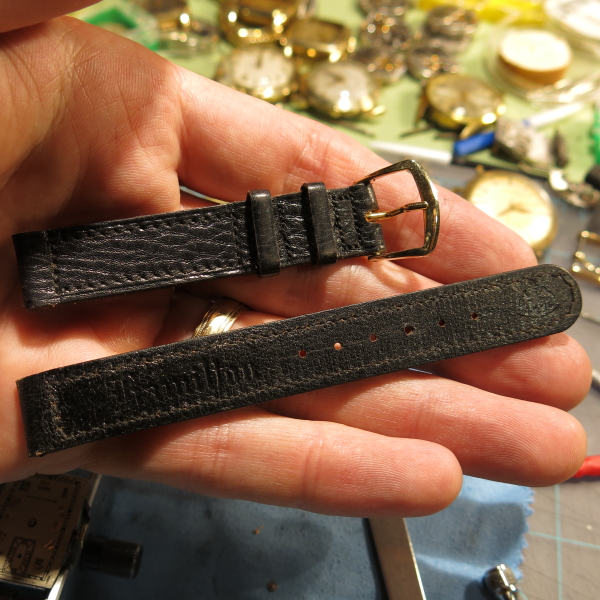 I wouldn't trust such a fine watch to anything less than brand-new spring bars. 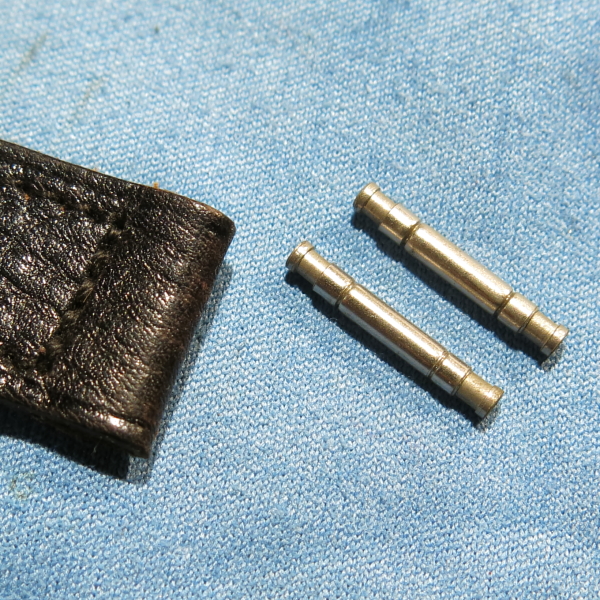 Here's the finished project.  The purple tone on the bezel came off without any effort.  This watch looks superb with a correct strap.  Don't you think? 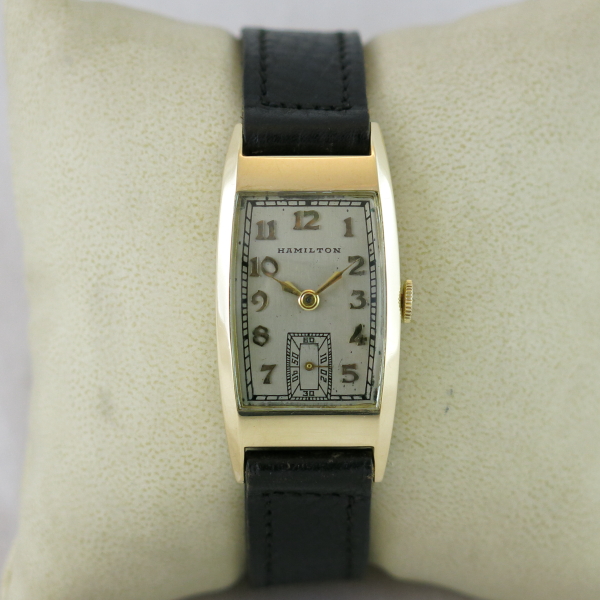 You can get crystals in regular thickness or double thick.  I personally prefer double thick - especially on gold filled models since the extra thickness protects the case from wear from shirt sleeves, etc.  I also think it looks really cool with a thick piece of glass. 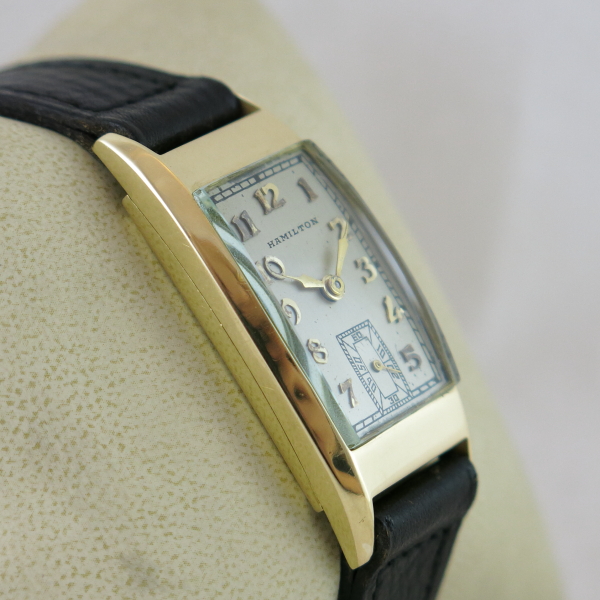 I bet Harry would be glad to know his watch is still in good shape.  I'm sure he was very proud to receive it back in 1939. 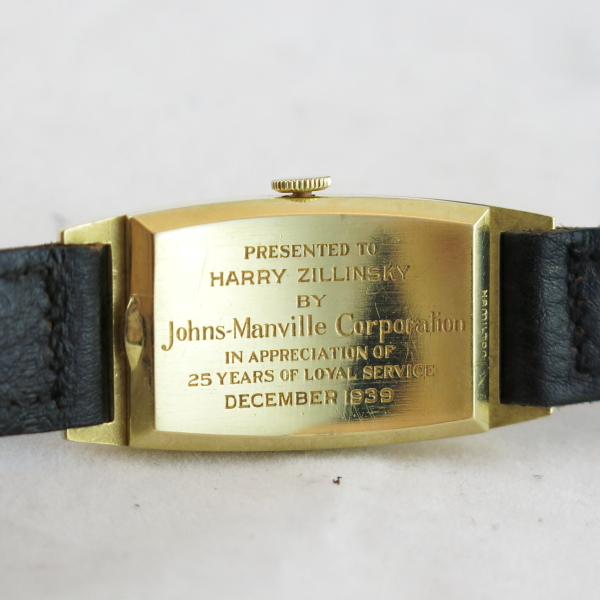