I think it's interesting to explore the rationale for Hamilton's model names.  Originally they were very simple and just described the shape of the watch... Cushion, Rectangular, Oval, etc.  Some models where named after premier resorts of the time... Piping Rock, Meadowbrook, etc.   There are a lot of models named after Pennsylvania towns on "the Main Line", such as Ardmore and Wayne.  Some models were named after famous people, especially the models in the "explorer series", like the Byrd and Livingstone.

It would appear that eventually Hamilton executives got tired of thinking up themes and just adopted men's names for men's models and ladies names for ladies models.  Although I have heard that often there was a reason for which watch got what name... perhaps to recognize employees or people of distinction in Lancaster, PA.

So what about the 1954 Fulton?  Ever meet someone with the first name Fulton?  Me neither.

I wonder if maybe it's named after the venerable Fulton J. Sheen, a Catholic archbishop who is known for his preaching and especially his work on television and radio from the 1930's through the 1960's.  He may one day be canonized as Saint Fulton.

Another possibility is Robert Fulton - the inventor of the first commercial steamboat.  He had a storied life and travelled the world but he was born near Lancaster, PA.  So maybe that's the connection?

Regardless, there's a Hamilton model called the Fulton and it was made from 1954 through 1957. 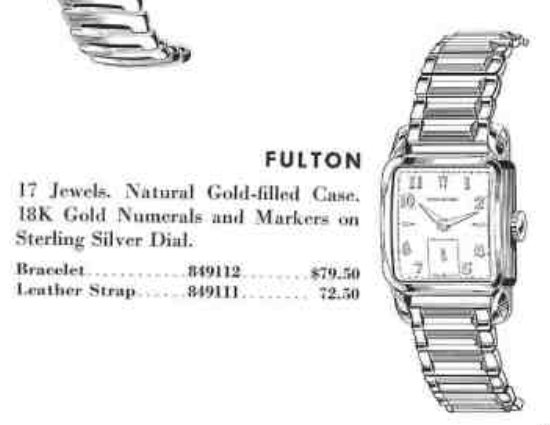 The Fulton came in a 10K gold filled case with a sterling silver dial outfitted with solid 18K gold markers and numerals.   You could get it with a matching bracelet or a leather strap.

Since the Fulton spans the 1954-1955 time period, you will find the model has either a 17 jewel 8/0 size 747 movement or it's replacement, the 730 movement.  The latter is basically the same, except it has a shock protected balance.  I suspect you'll find more Fultons with the 730 movement just because it was made for a longer period with that grade.

I wouldn't say the Fulton is rare, so it's surprising to me that it's taken me 6 years of collecting to land one.  Maybe it wasn't a very popular model or maybe it just looks like so many other models that it hides well.

I did eventually come upon one and I got a good deal on it because it didn't have a crystal and had a slight case of "dial rash" as a resort.  The crystal is very important to protecting a watch, and without one there's a good possibility of snagging the hands or scratching the dial.  This Fulton doesn't look too bad but the dial is a little stained in the lower right and has a few minor scrapes.

Notice the model has unique markers at 12, 3 and 9 that look like exclamation points without the dots.  There's only so much you can do to jazz up a square dial, I suppose.  It's interesting to see markers at those positions and numerals are the others... normally it's the other way around and the numerals are at 12, 3 and 9 and markers every place else. 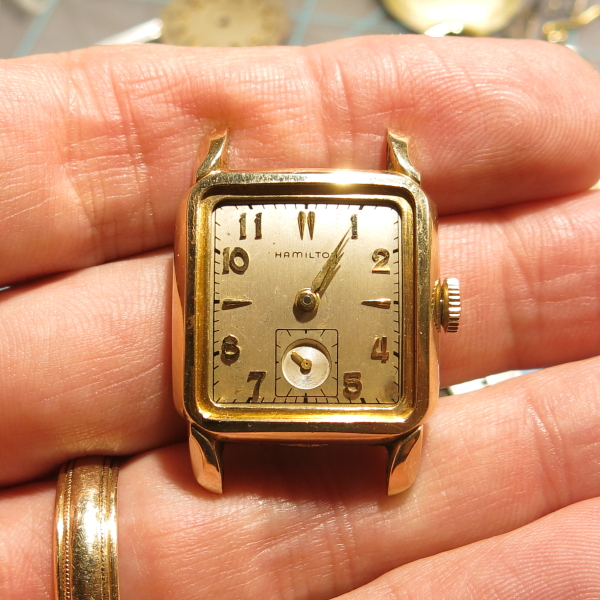 The case is in really nice shape overall.  I don't think this watch saw much action before it lost it's crystal and got placed in a drawer for a few decades. 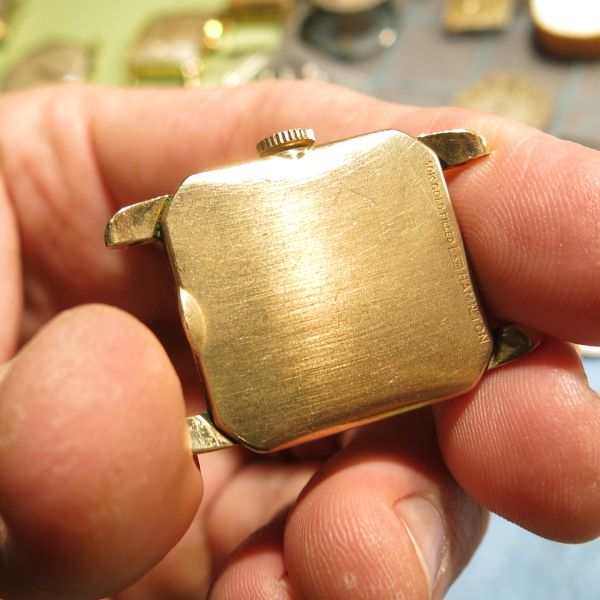 The inside of the case back makes identification easy.   I see a couple of watchmakers' marks inside so this watch did get overhauled a least a couple of times since 1955. 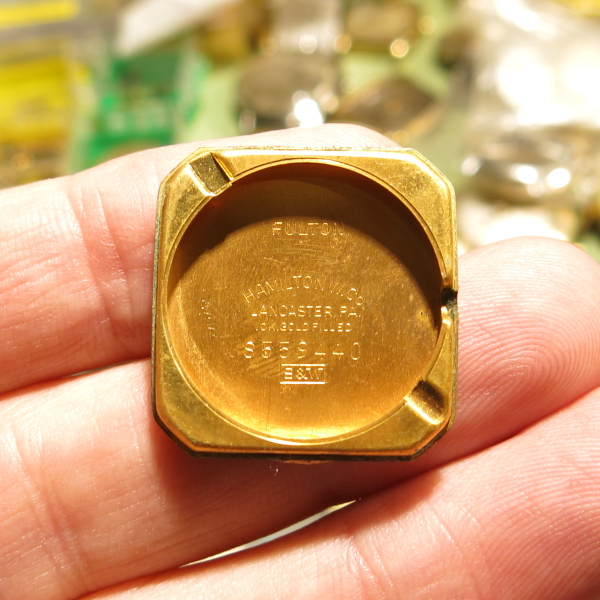 This example has the 730 movement with shock jewels on the balance cock.  It's a little dirty and due for a trip to the spa. 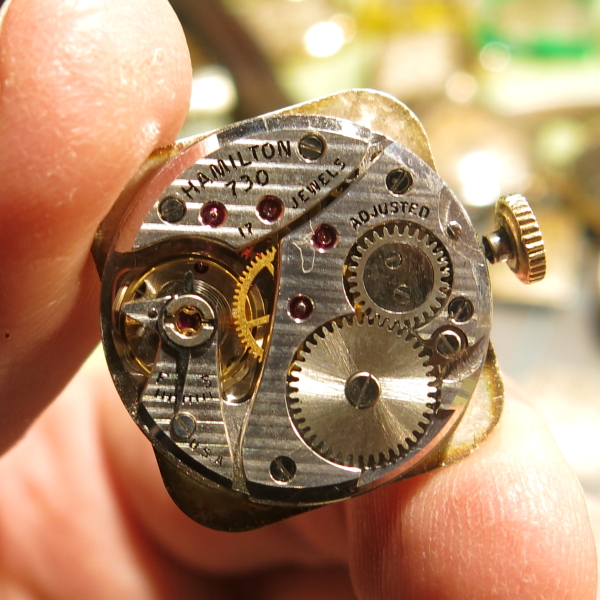 While everything is cleaned I will prep a new glass crystal for installation.  This model takes what is called a "cylinder", as the crystal arches from the top to the bottom, as opposed to being relatively flat. 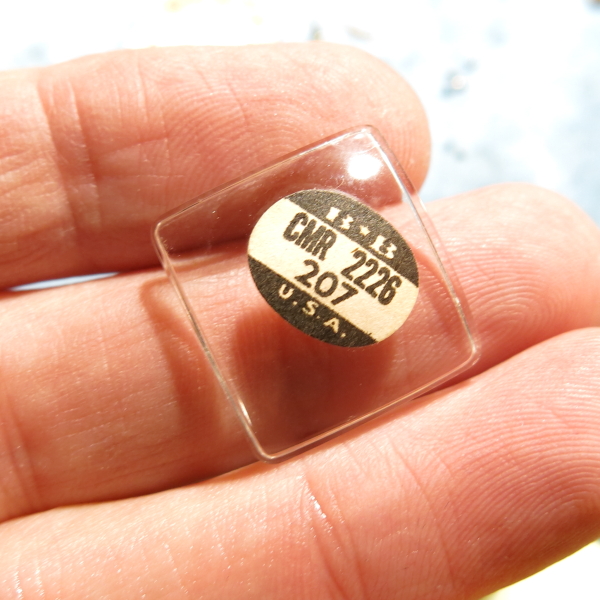 Everything is ready for reassembly. 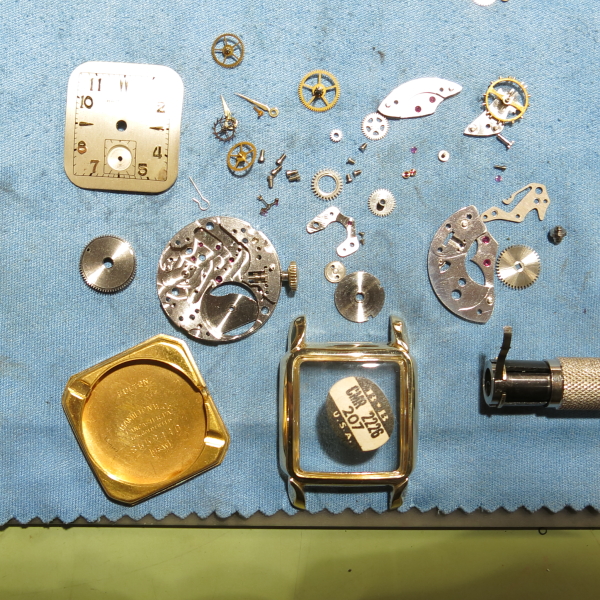 With the mainspring wound up, once I put the balance back into place the watch jumps back to life.  Now I have to reinstall the balance jewels and close the shock spring. 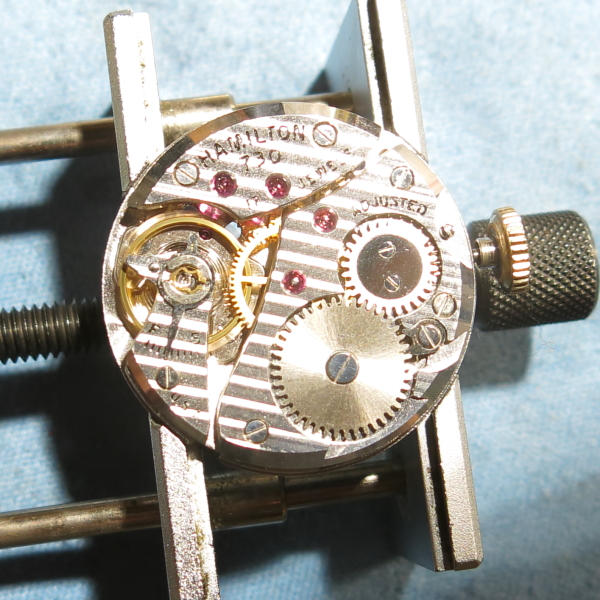 There... the movement is purring like a kitten with good motion... this bodes well. 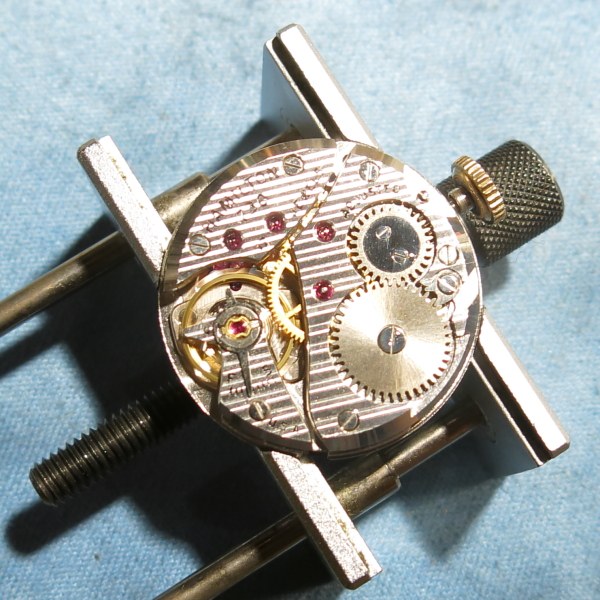 The timer says the watch is running cleanly but the beat error of 5.9ms is a bit too high.  Adjusting it is a pain but this performance is more than twice my threshold for acceptance.  I'll need to remove the balance from the balance cock and rotate the hairspring collet so that it better aligns the impulse jewel with the pallet fork... thus centering the balance so it swings the same distance to each side.  If it was perfectly centered the beat error would be zero.  5.9ms isn't much movement... maybe 10 degrees... so it's a very precise operation and a bit of a best guess. 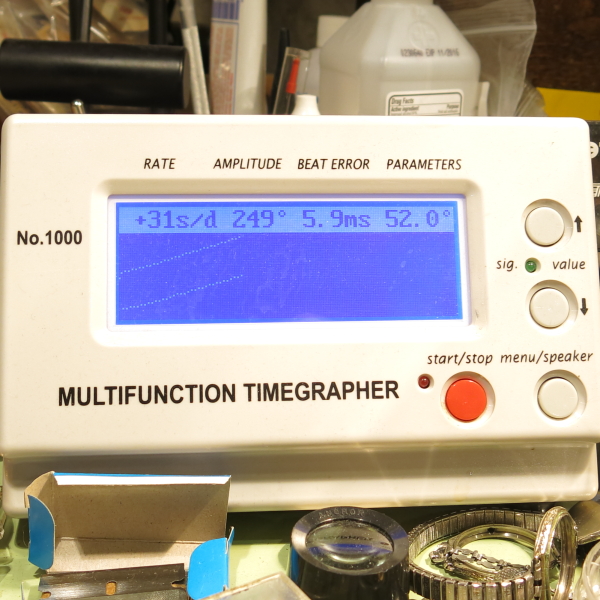 Getting warmer... notice my amplitude is a bit low.  200 degrees is my cutoff but if you'll recall the post I did on the Darrell, the 747 / 730 has three different mainspring strengths and this is a good opportunity for the stronger mainspring.  So I'll install that in this movement. 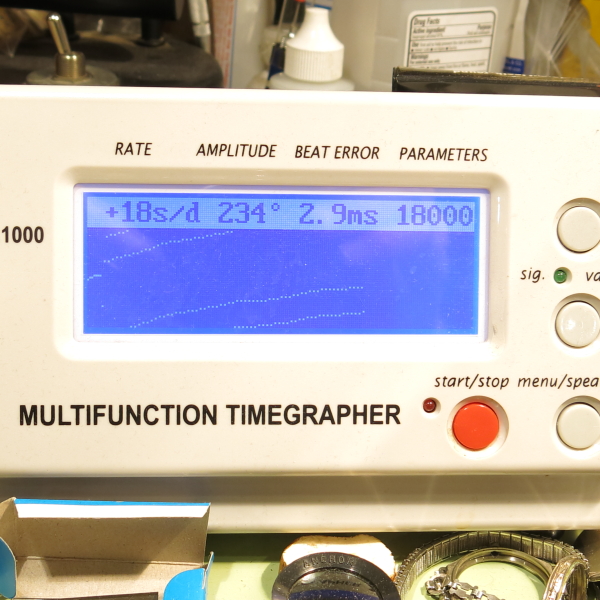 Alright... great amplitude and a beat error of 2.1ms.  Could I get it any better?  Probably, but it would take a few more tries and every try risks disaster with goofing up the hairspring.  This beat error might cause the watch to stop a few minutes before it would with a lower beat error but I can live with that. 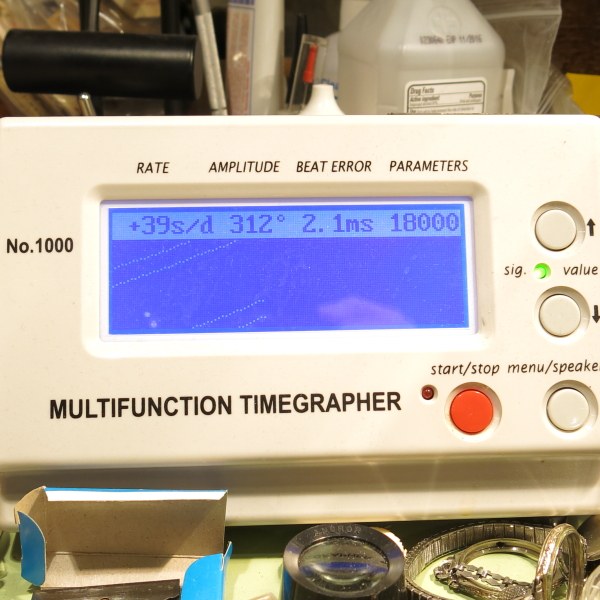 My light tent and Canon camera are a perfect setup for identifying every flaw with a watch, and maybe even a few that don't exist.  This Fulton turned out great and with a fresh crystal and such a pristine case I'm very tempted to get the dial redone so that it will look equally perfect.  It's really not that bad but my eye is drawn to the stain between 4 and 5 and any distraction on a nice watch like this is too much of a distraction.  It can be refinished to look "like new", so why not do so and give this watch a new life? 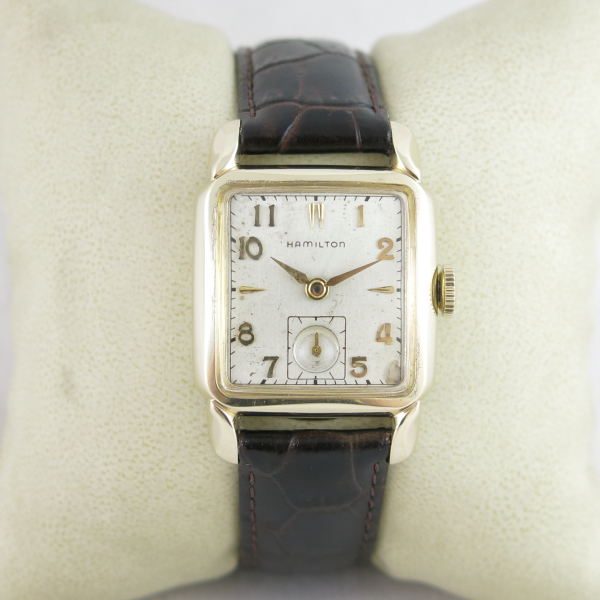 I decided since the case was so nice that it would look a lot better if I got the dial refinished.  I think it looks much better, don't you? 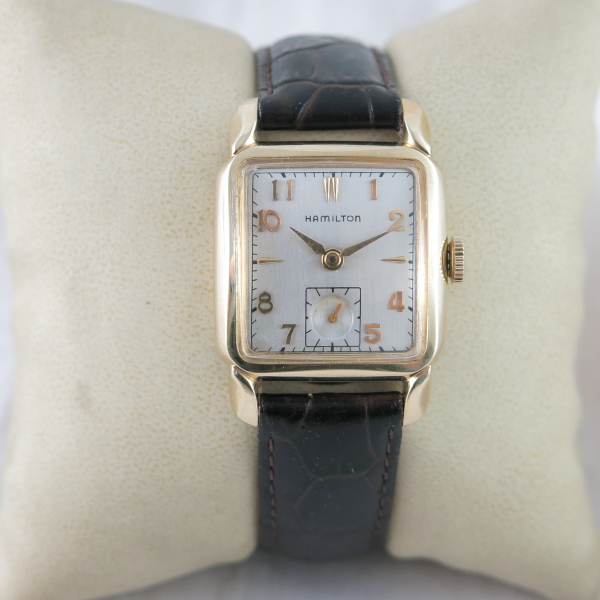