There are occasions where Hamilton has put words on dials that make you wonder what the back story was.  Two examples that come to mind are "Pan Europ" and "Estoril".  The former is still in use today so it must have some significance, maybe for the European market?  The latter, "Estoril" was used in the 1960's and 1970's on several models but it's application, and even the look of the word, appears to vary.

Take for example the 1964 Dateline A-578.  It was produced for two years, according to the catalogs. 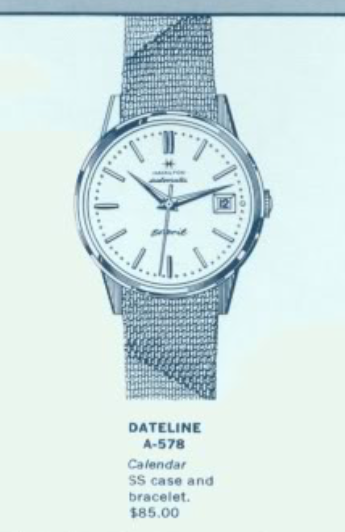 The Dateline A-578 came in a two-piece stainless steel case with a matching bracelet.  Tucked inside is a Hamilton 17 jewel 694A automatic movement, basically the same thing as a 689A in use at the time,  but with a date complication.

A fellow collector recently sent me a pair of these watches that needed new crystals installed and a good cleaning.  The first one looks just like the catalog image with the exception of the minute track. I would have expected dots instead of lines.  The catalogs are usually good representations of the actual model but they are also artistic representations so they're not always a perfect match.  This watch's hands are losing their luminous paint, so I'll redo them with the rest of the movement. 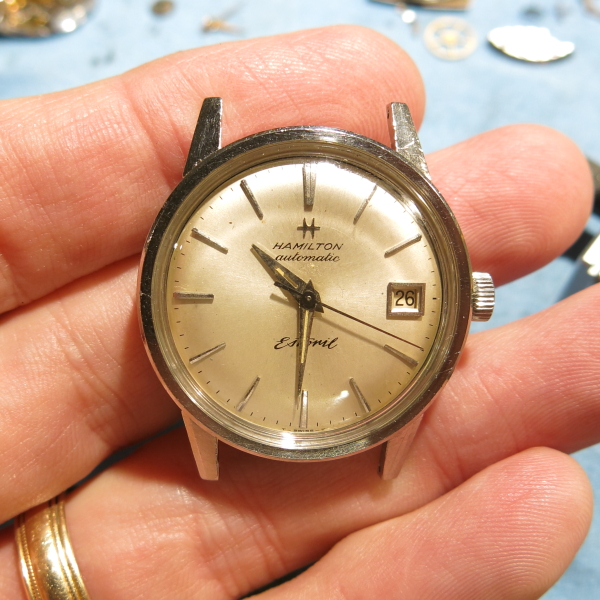 The Dateline A-578 is a waterproof watch and the case back appears to represent that.  I don't know the significance of 300... is that feet?  That's what I would guess. 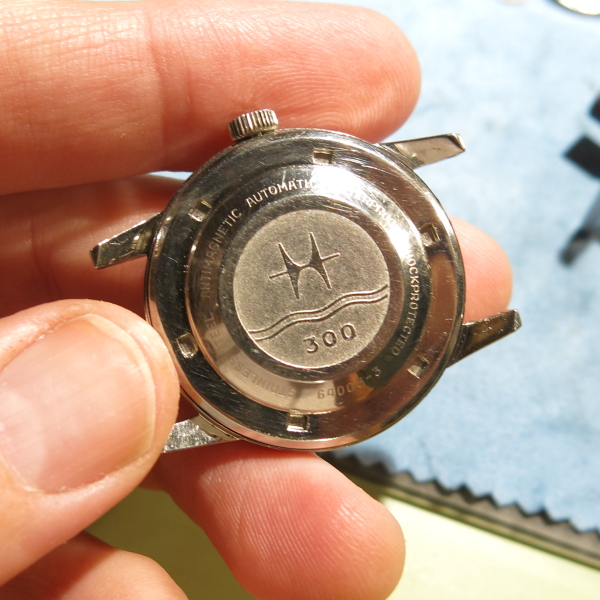 The movement inside this watch looks to be in good shape, as is the large rubber gasket that seals it up tight when the back is screwed on. 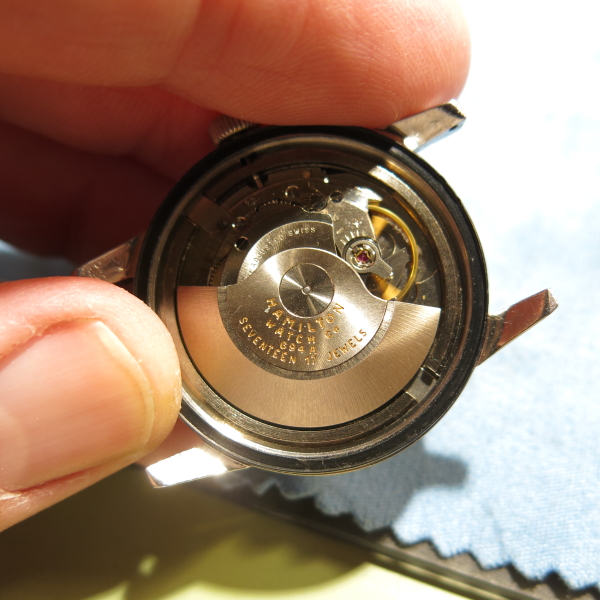 With the dial and hands out of the way, you can see the business end of the date complication.  There are a couple of spring-loaded parts in this mechanism that you have to be careful not to lose when you take it apart. 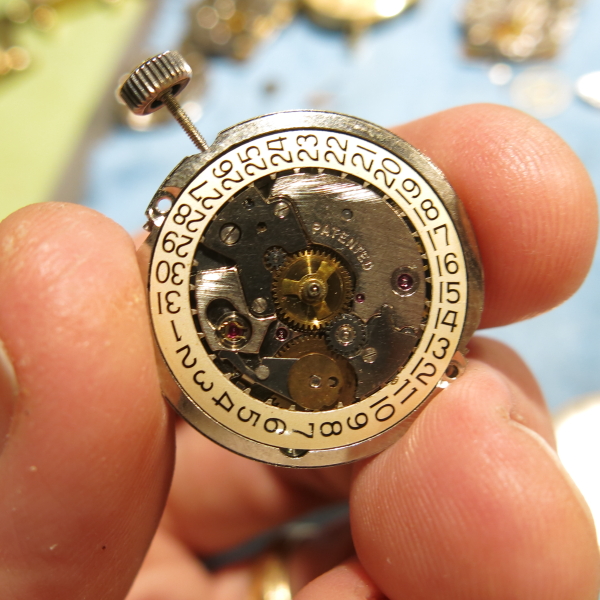 While everything is being cleaned I will prep a new crystal with a silver reflector ring.  I often use GA EvrTite crystals but Stella is a good brand too. 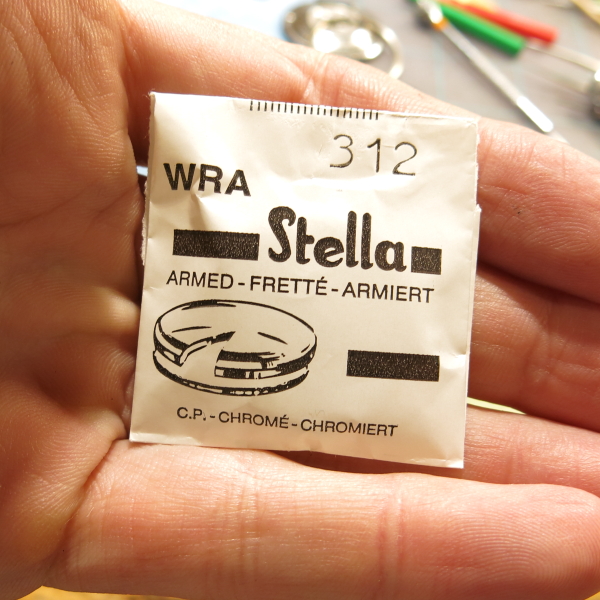 Crystals with reflector rings do not compress so "the claw" isn't an option.  Instead they are pressed into the bezel with a special tool. 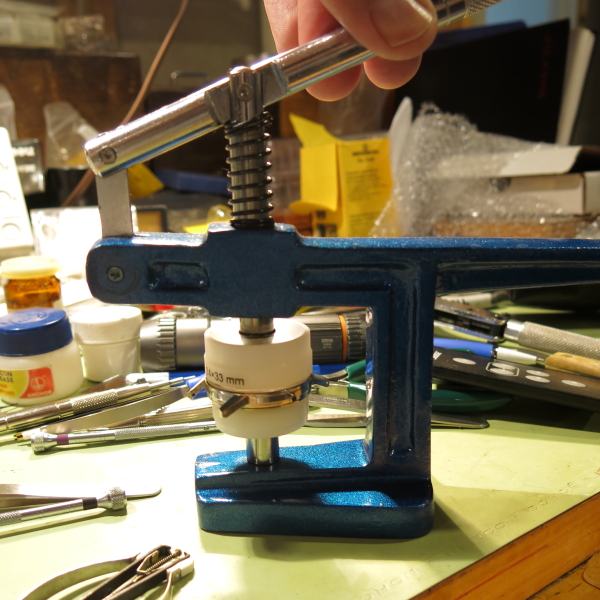 Everything is cleaned and dried and I'm grateful that all the parts are present and accounted for... there are a lot of them and some are easy to lose. 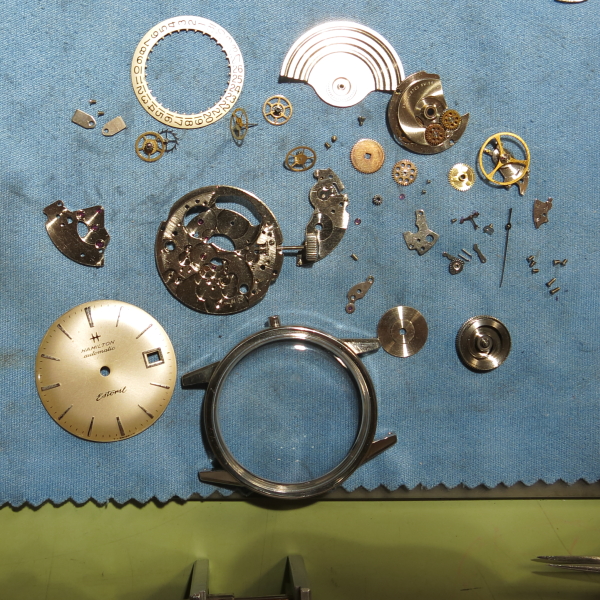 New luminous paint is applied to the back of the hands.  The front side will look nice and crisp. 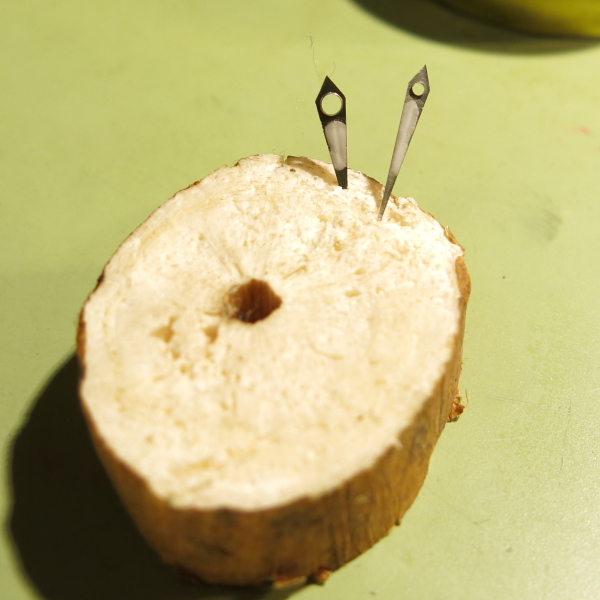 The main part of the movement is back together and running now that the balance jewels are reinstalled.  It's off to the timer to see how it's running. 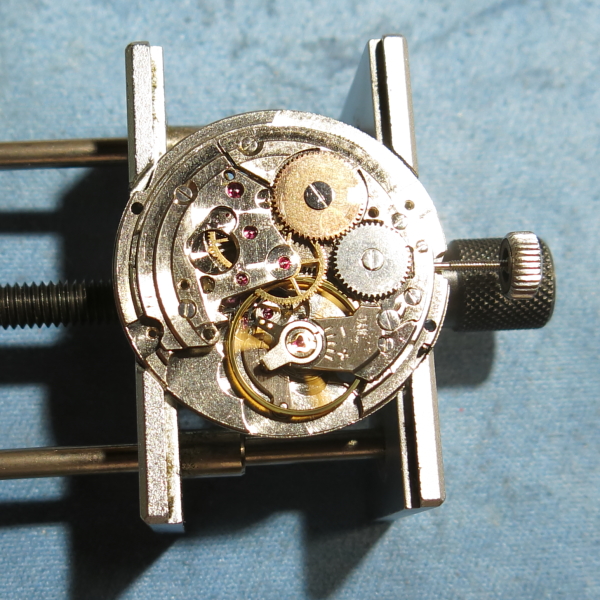 Looks like it's running a little slow with a tiny bit of noise.  I'll give it a tweak and speed it up. 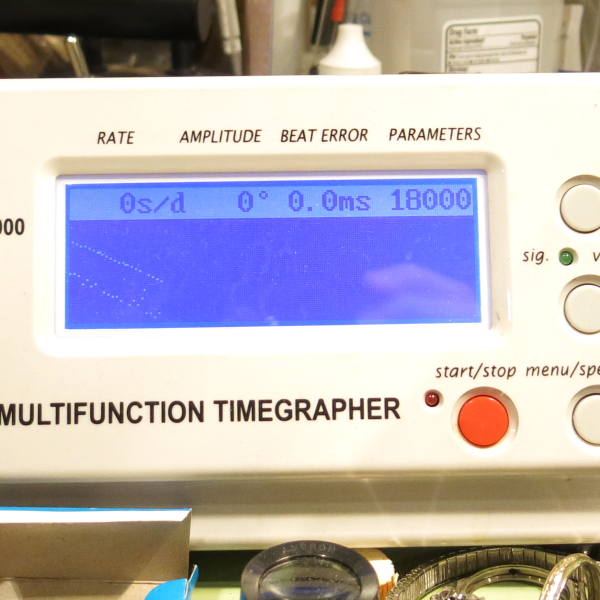 It takes hardly any adjustment to make the watch run faster.  Next I'll adjust the beat error and bring the two lines as close together as possible.  The beat error is now an acceptable 0.3ms. 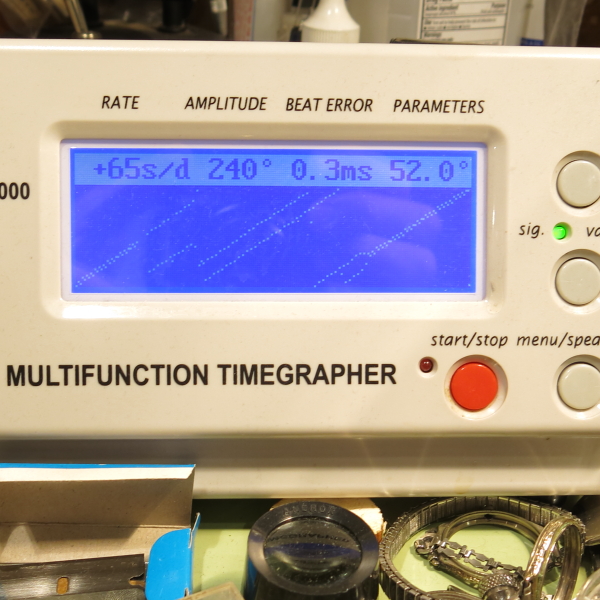 With the beat error reduced I will give the regulator another fine tweak to try to slow the watch down.  25 seconds fast per day is a good place to leave it for now.  The amplitude of 237 degrees is fine, I haven't wound the watch fully yet. 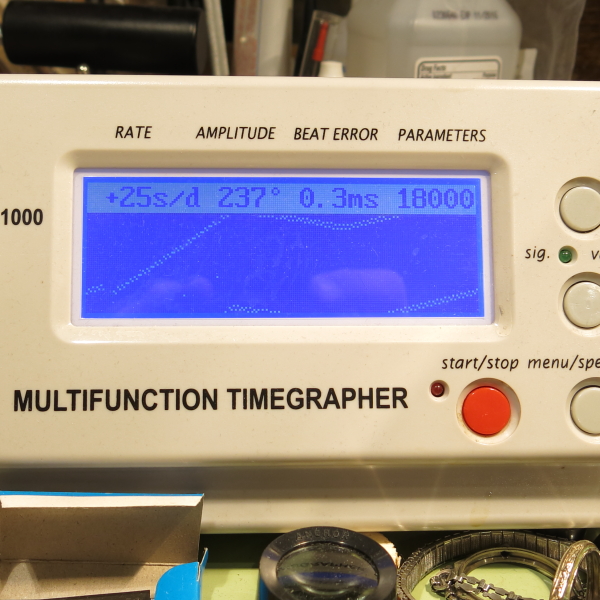 Just getting the watch to run well is only half the battle.  The next test is getting all the parts for the date complication reinstalled and then making sure it advances the date as it should.  Once the date mechanism works properly I can reinstall the dial and hands at 12:00 midnight, when the date should change. 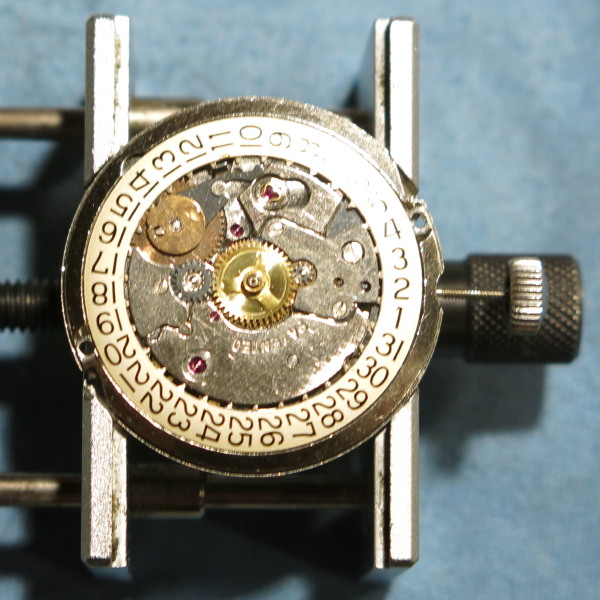 Two little tabs hold the movement to the inside of the case.  One of them is already in the watch waiting for it's retaining screw. 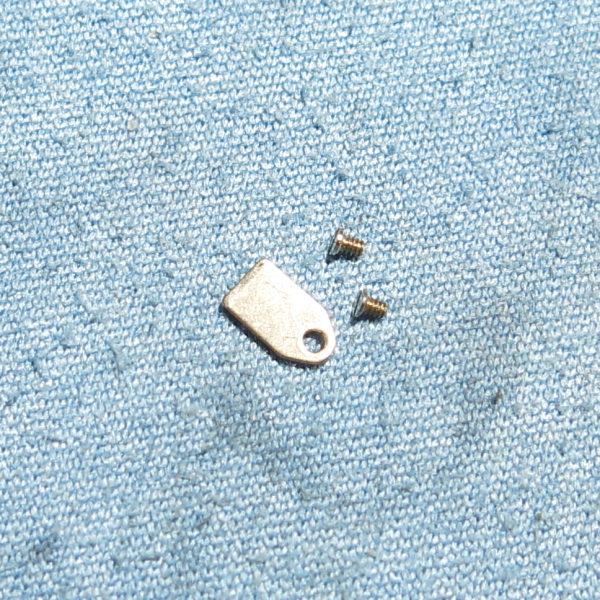 And here's the finished watch looking as good as it runs.  The new lume on the hands and the crystal with reflector ring are nice improvements.  This watch looks almost new. 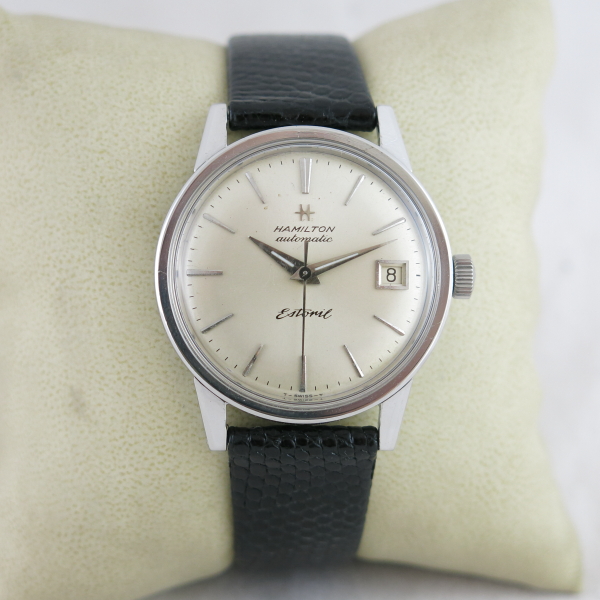 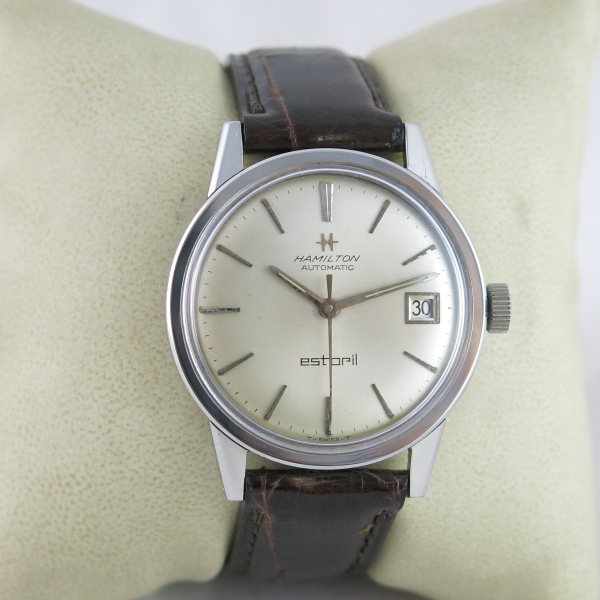