This is my 600th post to the blog.  Now that's a milestone worth celebrating and what better way to celebrate it than to feature an almost unheard of model?

One reason is they all feature diamonds in one way or another.  They say diamonds are a girl's best friend so it's possible diamonds featured on watches just didn't resonate with men.  After all, Hamiltons were expensive and would you rather have a manly dive watch like the 1966 Aqua Date Skindiver or a fancy pants diamond-laden timepiece with a two-tone suede strap?

Of course I'm being a bit facetious, as diamonds were included on lots of Hamilton models going back to the 1940's.  Diamonds make a special watch even more special.  But there were lots of other great models to choose from in the 1960s so that was probably a factor.

Another reason for rarity is total cost.  The finest watches were especially expensive.  In fact, several of the Lord Lancaster models didn't even list a price in the Hamilton catalog at all!  I suppose if you had to ask how much the watch was, you couldn't afford it. 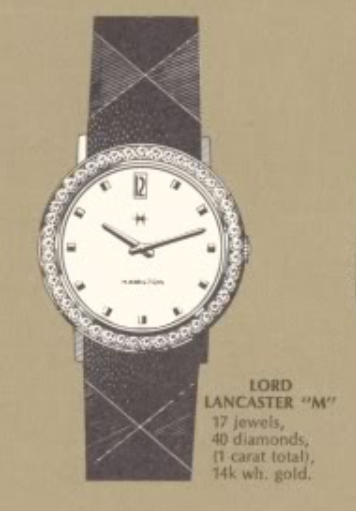 The Lord Lancaster M featured a 17 jewel movement but you might say it was a 57 jewel watch, as it had 40 diamonds surrounding the bezel.  The diamonds combine to a total of 1 carat weight!

You might wonder what the Lord Lancaster M sold for.  I will tell you... I don't know.  The most expensive Lord Lancaster with a stated price was $400.  So if you assume it was more expensive than that, then you can at least make an educated guess.  $400 in 1966 is well north of $3,000 in today's dollars.

Now you have to be careful with a watch like the Lord Lancaster M.  It looks a lot like a "jeweler special" where a jeweler recased a Hamilton movement in an aftermarket case.  Often the cases are solid white gold or even platinum on occasion.  They are not authentic models and as such they are not desirable by knowledgeable collectors.  These franken-watches are mainly worth the scrap value of the materials they contain - which can still be significant.  However, on any given day you can find aftermarket jeweler-cased watches on eBay listed for ridiculously high buy it now prices.  Buyer beware, they are arguably worth $350-$400, tops.

With that in mind I was a bit incredulous when I saw a Lord Lancaster M listed for sale.  It wasn't in very good condition and I had my doubts about it's authenticity until I saw the inside of the properly-marked case back.  I put in a ridiculously high bid to make sure I wouldn't lose out to a last-second sniper.  Fortunately I wasn't competing with anyone with deeper pockets.

As received you can see that it was very dirty and the dial had a bit of a green funk growing around the perimeter. 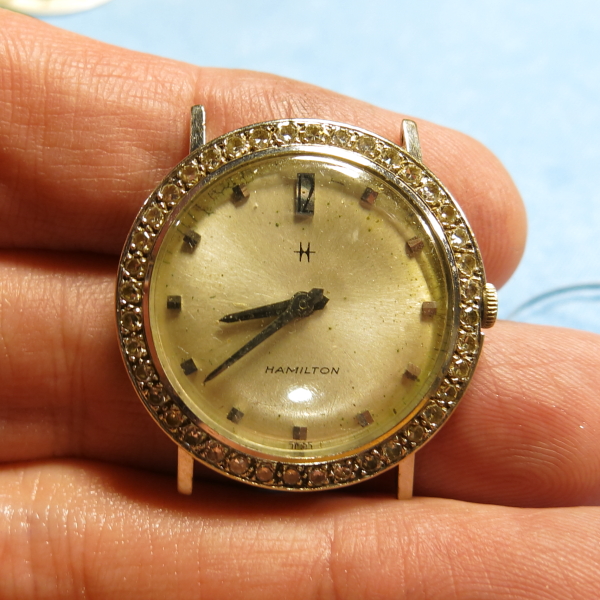 The diamonds don't really sparkle thanks to all the grime but none of them are missing - so that's a good thing. 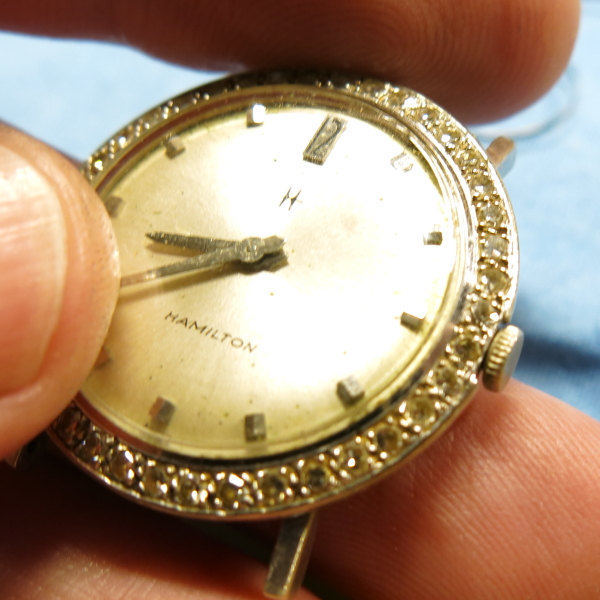 The back of the case is scratched up - not too deep but enough that the light reflects off it.  Perhaps this watch was engraved at some point?  The case back says Hamilton - that's something a jeweler cased model would not say.  All 40 of the holes for the diamond settings are filled with what I assume is the DNA of the previous owner.  Yuck. 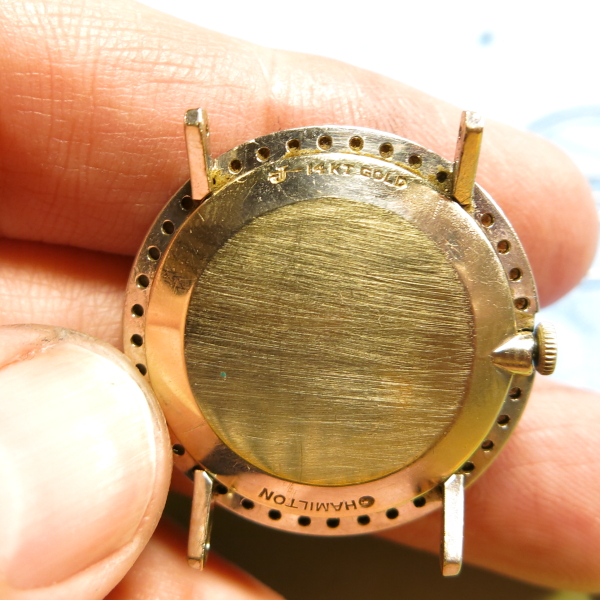 The movement comes out once the snap-on back is removed. 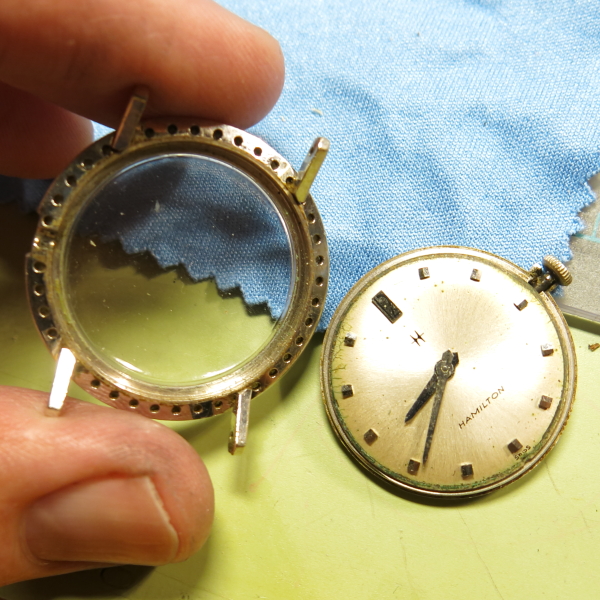 This relatively large watch has a very small movement inside.  My photo is a bit blurry but you can see the outline of the movement recess. 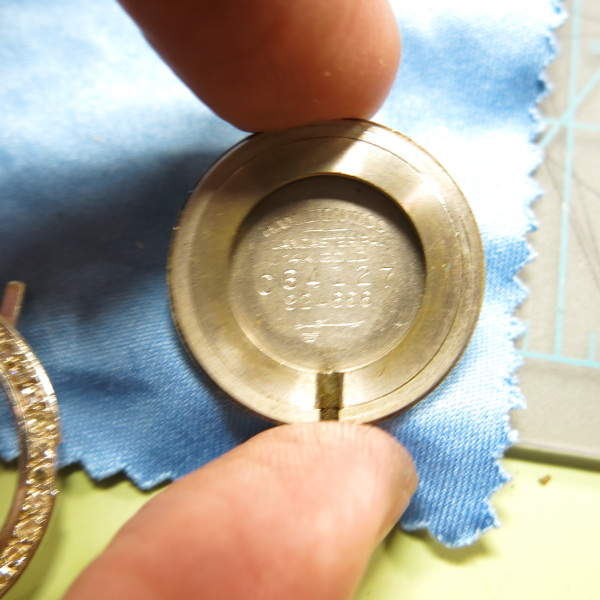 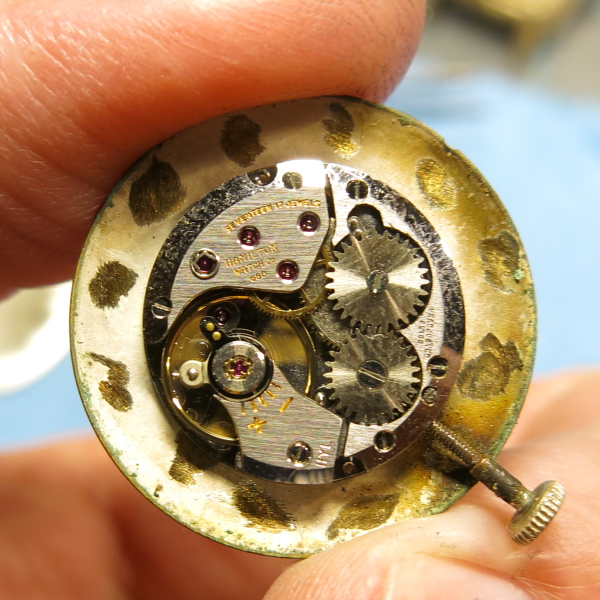 Working on tiny movements like this presents a challenge that larger movements don't involve.  Although many of the parts are basically the same size, holding the movement steady is difficult.  You don't want to accidentally flip the movement and break the balance staff.  I have to use my smallest movement holder. 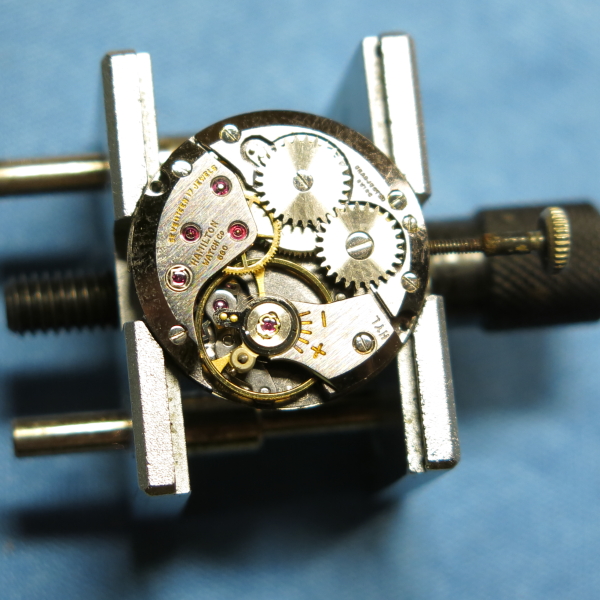 Just to give you a perspective of size, here's the 680 movement in it's holder relative to my larger Bergeon holder that I typically use.  The other holder looks huge by comparison. 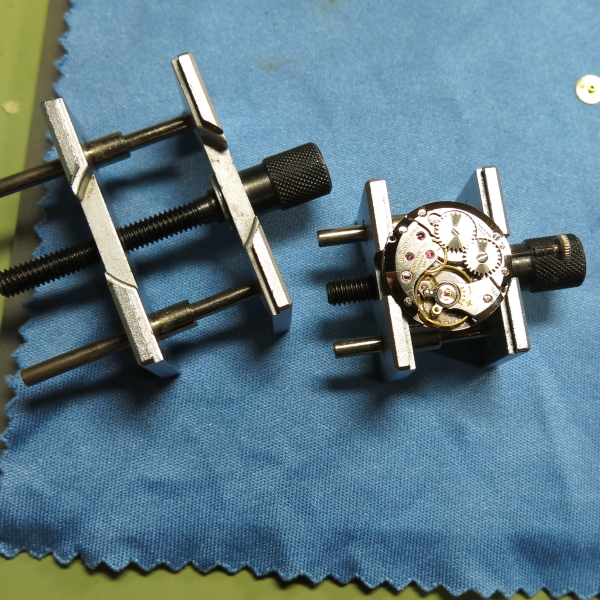 The dial-side of the main plate is a classic ETA design. 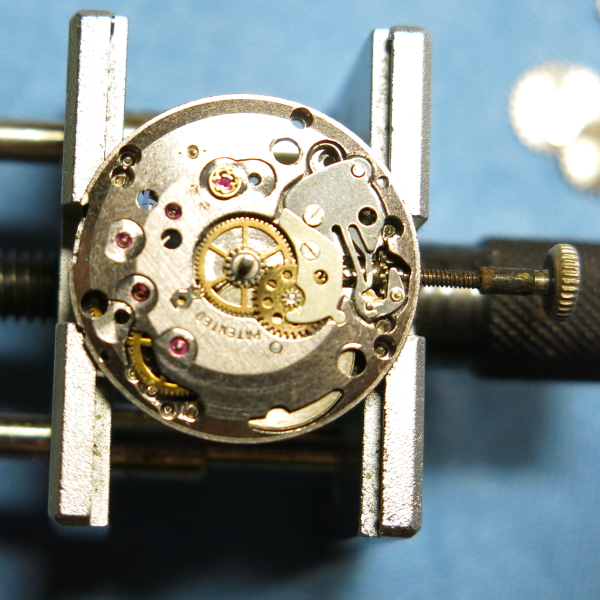 Everything is cleaned and dried.  This looks like a straightforward movement when it's all laid out like this... way less complicated than a micro-rotor automatic, that's for sure. 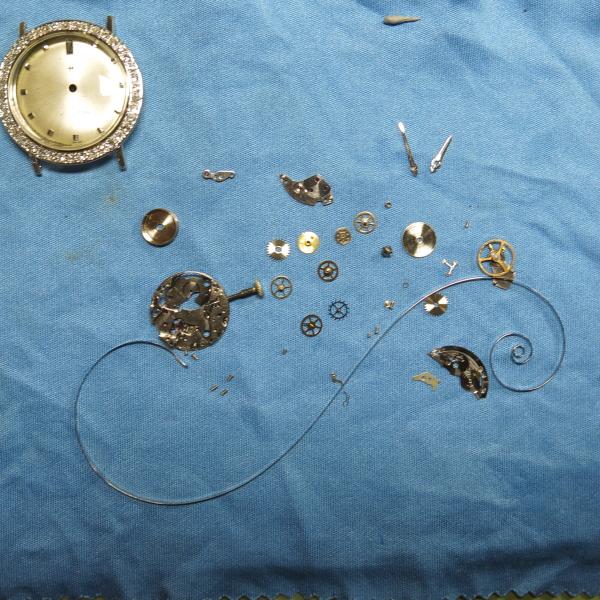 Putting the four wheels of the train back in place is the first step for any ETA movement.  They should spin easily if everything is properly lined up. 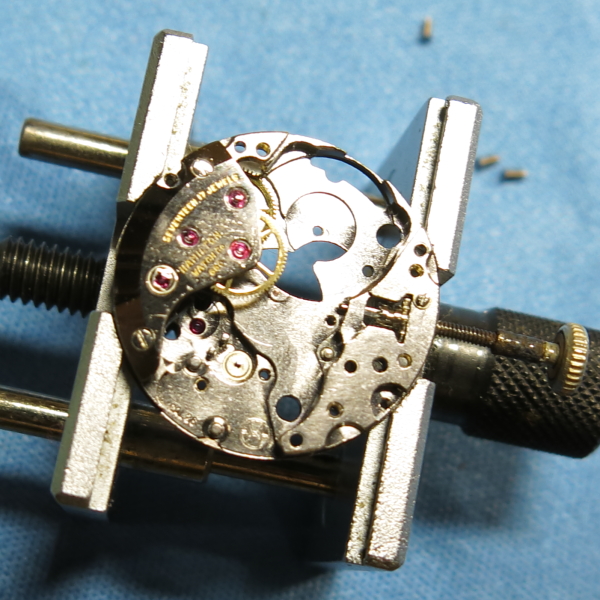 Then the pallet fork and the mainspring barrel go on so I can wind the watch and re-energize it. 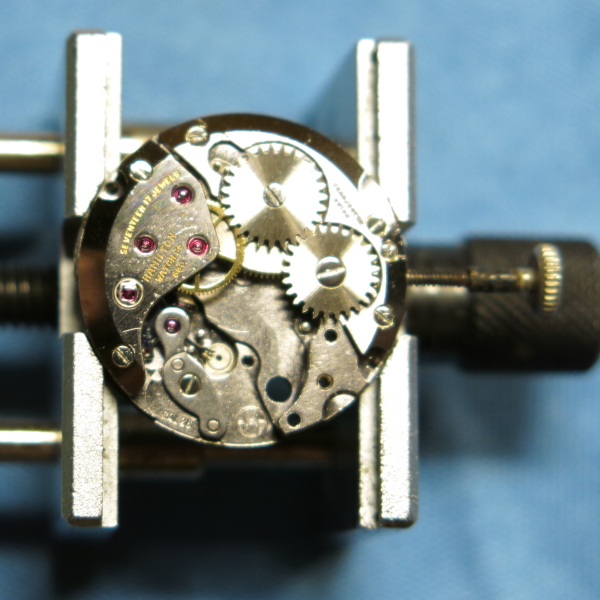 Once the balance is dropped into place the watch movement comes back to life. 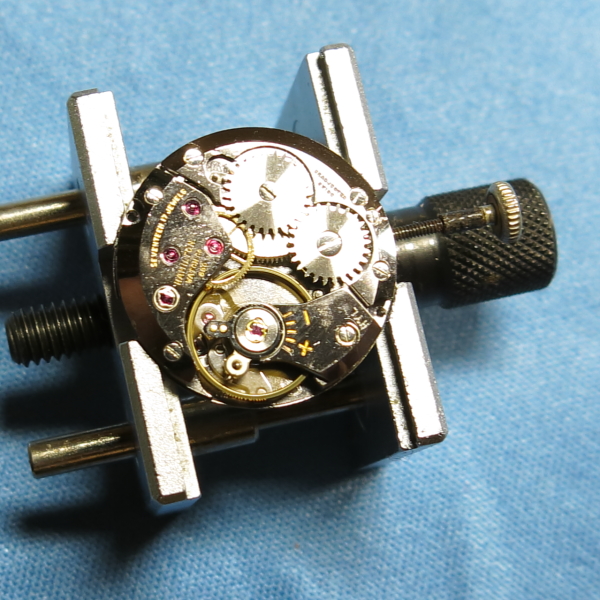 Based on what I see from the timer, this movement is ready to roll. 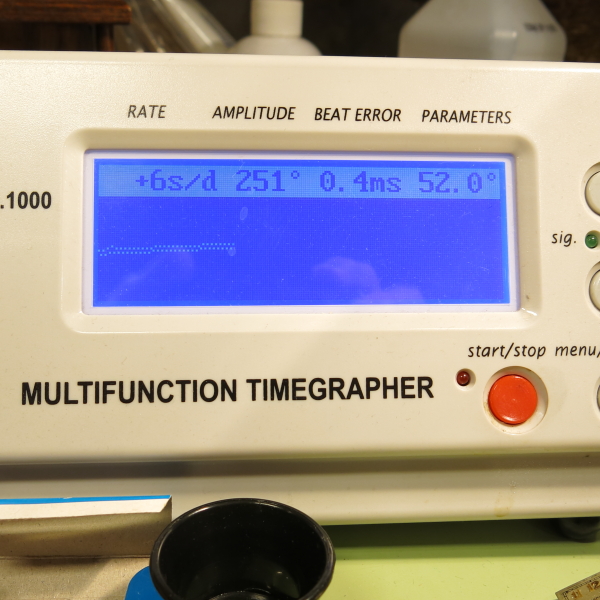 It would be great to find a vintage two-tone suede strap like what would have originally come on the Lord Lancaster M but in the meantime a nice black genuine lizard strap will have to do.  Unfortunately I lost a little of the printing when I tried to remove the green funk on the dial. 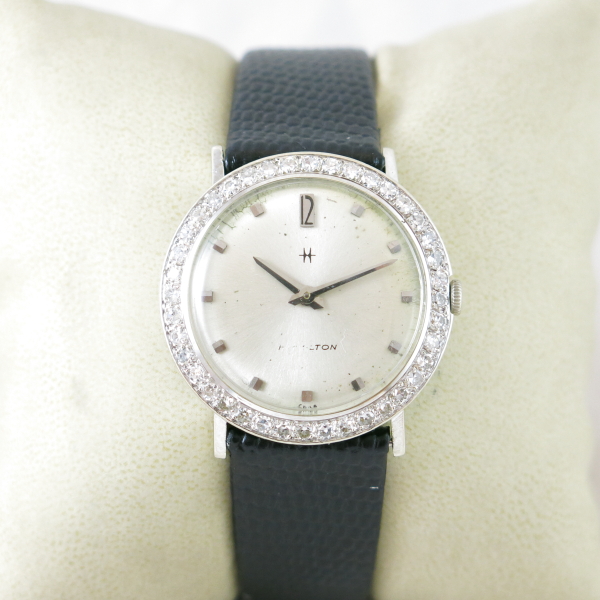 But thanks to my friends Rob and Elizabeth Miller at International Dial Co, I've got a brand-spanking newly refinished dial to show off to you.  I've actually had this project waiting in the wings for a couple of months while I got the dial refinished.  The results were worth the wait, they nailed it. 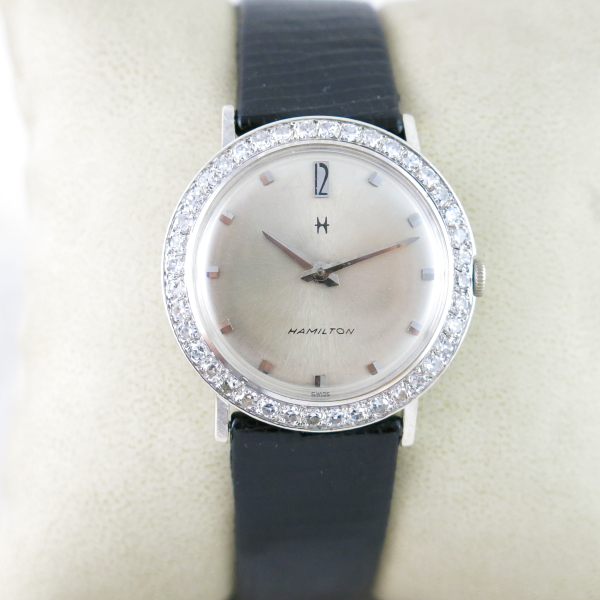 Boy do those diamonds sparkle now.  I think this watch looks fantastic but don't expect to see it for sale.  I showed it to my bride and she said, "Is that for me?"... and you know how that story ends.