There has been one Hamilton watch that I've been on the hunt for a long time.  It's not an uncommon watch, in fact, it's easy to find.  However, they always sell for good money - typically well north of $500.

The model is the Hamilton Aqua-Date.  It was made from 1966 through 1962.  It's a "super compressor" model and specifically designed for scuba diving. 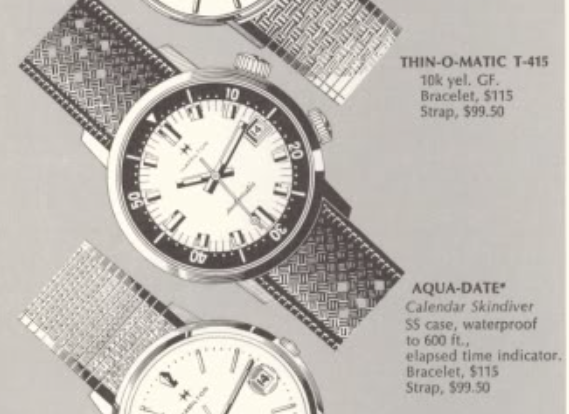 I think the Hamilton marketing folks were on the tight track with their media advertisement of the Aqua-Date but I'm not really sure why they thought wearing the watch on your goggles would be the best choice. 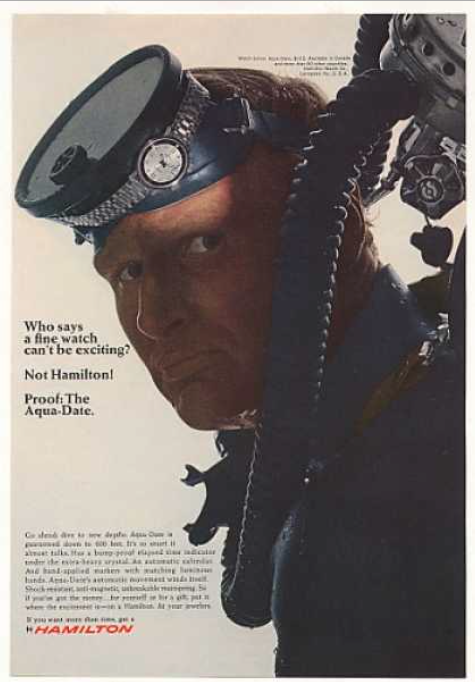 There are several different designs of "compressor" cases.  A super compressor typically has a robust screw down case back and two crowns.  One crown winds the watch or sets the time/date.  The other crown rotates a chapter ring inside the crystal so you can estimate the elapsed time.

The Aqua-Date can be found with the 17 jewel 694A movement inside or the 64A, depending on the year of the watch.  The transition was around 1970, based on my guesstimate.  The movements are largely the same with the exception of the 64A having four extra jewels in the automatic reversing wheels, bringing the total jewel count to 21.

As fate would have it, I was able to score what I thought was a decent-enough project watch.  The seller's photos were so-so, the watch wasn't very attractive and his description made no sense at all.  So I got a fairly decent deal of just south of $300.  That's a LOT for me - but as I said above, I've been looking for one for a long time.

Looking at the watch, the crystal is cracked along the side.  The dial is an orangish brown.  The hour markers and hands have been filled with black enamel - they should be lumed.  The proof for lume is the dial is marked T-Swiss-T.  The T stands for tritium luminous paint.  On the other hand, all the parts are present - so that was a positive. 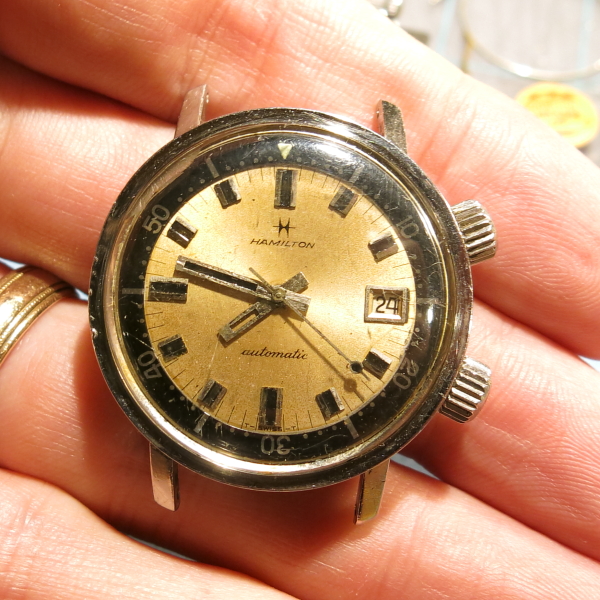 It wasn't clear in the seller's photos or the description that the case back has a damaged section on the outside rim.   It's mostly cosmetic but I don't think this watch should be used for scuba diving in the future.  That's okay - I recommend you keep all vintage watches away from water, even if they are supposed to be "waterproof".  That's only true if all the seals are new and intact. 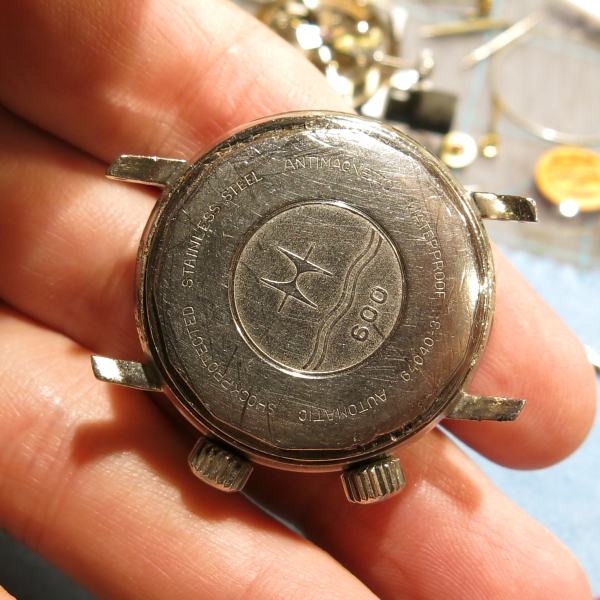 This watch has a 64A inside and it's very dirty.  The crown on the top is the time-setting / winding crown.  The other crown rotates the black elapsed-time ring inside the crystal. 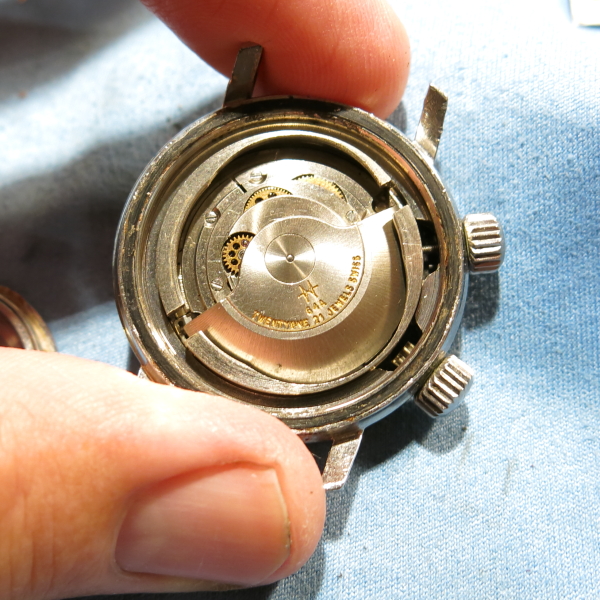 You can see inside the case back the super compressor markings.  Notice the damaged section on the outside edge of the back. 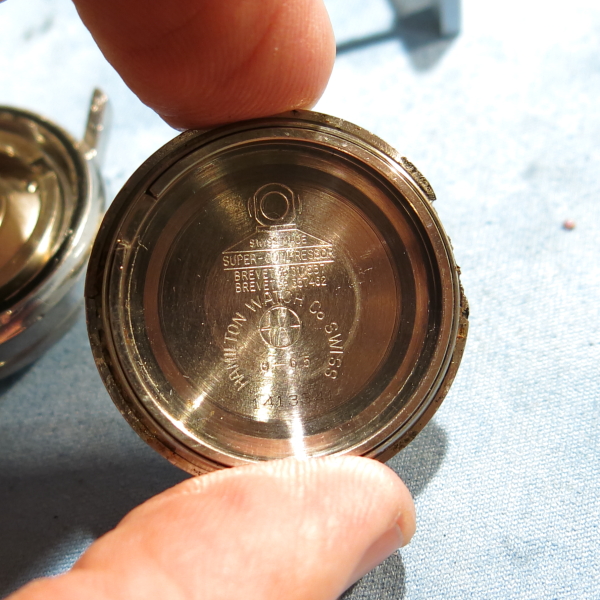 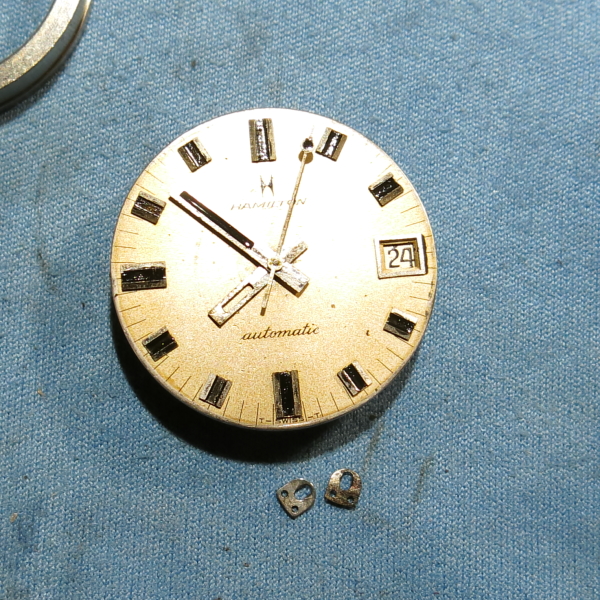 This watch came to me from Columbia, in South America.  I guess balance cocks are in short supply down there, as this watch has a balance assembly from another movement.  Notice the pink color of it - and it's also missing the import code for Hamilton in the USA.  It doesn't really matter since it's tucked inside the case but I have a replacement for it nonetheless. 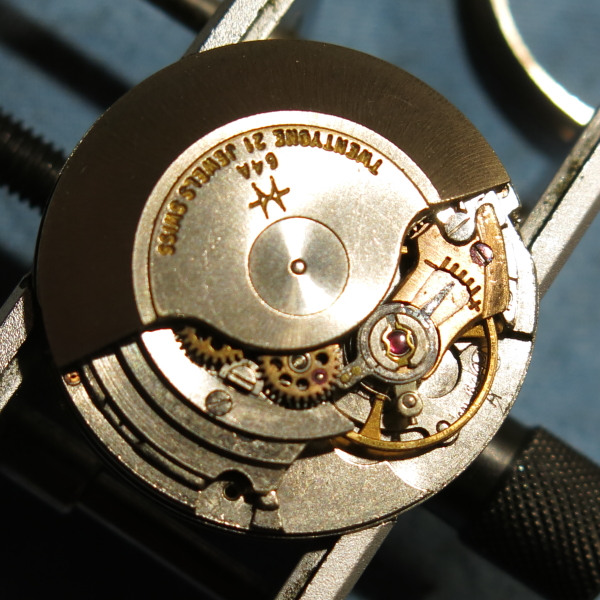 When I took the dial off I noticed an extra jewel floating around inside that got stuck under the set bridge (my tweezers are pointing at it).  All the required jewels are present and accounted for so this watch came with a spare, making it a 22 jewel 64A. 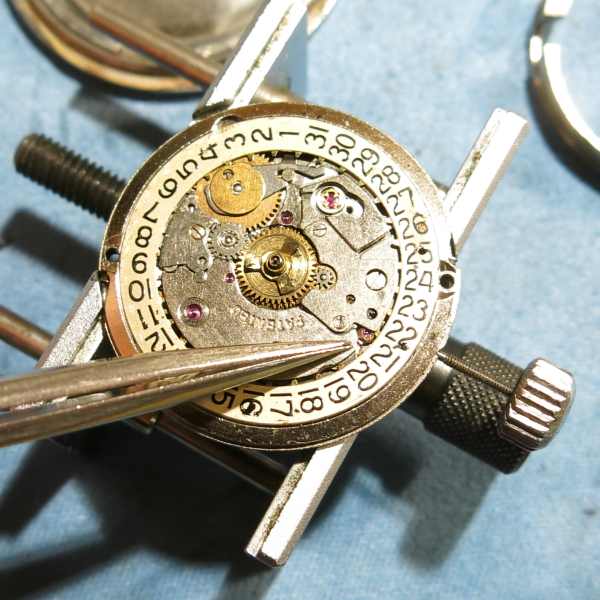 When I removed the crystal, the black elapsed-time ring came right out the front of the case. 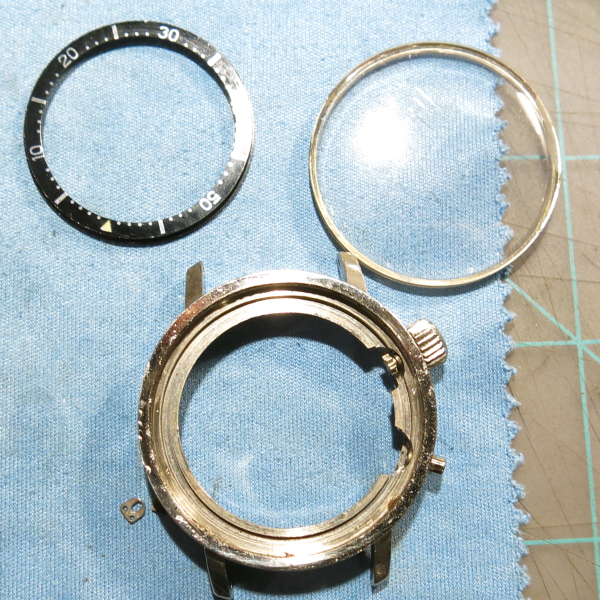 What to do about the dial?  The hour markers should be lumed, not black, but the black doesn't look too bad even if it's a little sloppy.  The finish on the dial has crackled and is a mottled.  The hour hand is missing it's black section.  So I can either leave it all alone and just add black to the hour hand or I can try to redo the dial and hands with fresh lume.  The latter would require getting rid of the black paint on the hour markers, 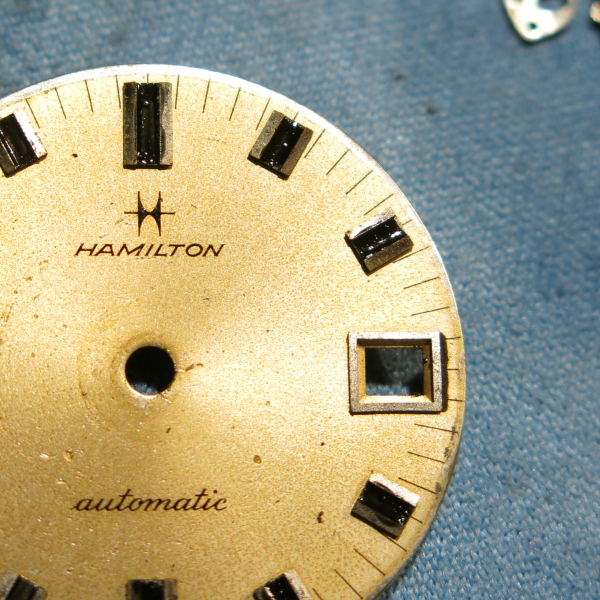 The hour markers are held on with tiny rivets.  I could punch each rivet out and then boil the markers until the paint comes off.  That's a lot of work though... hmmm.... what to do? 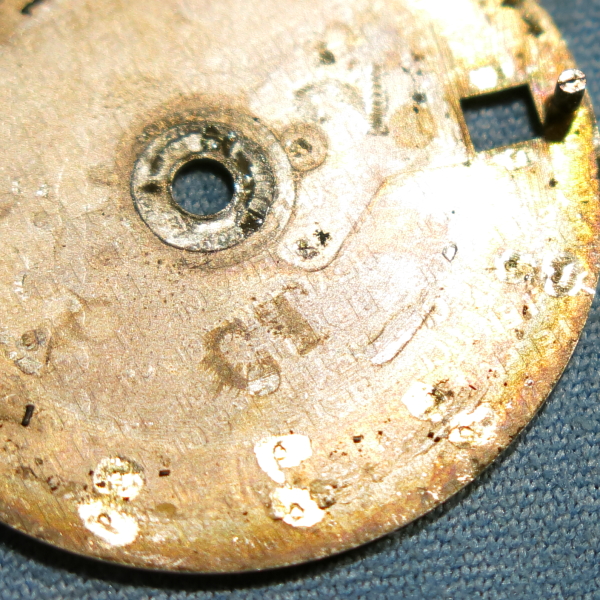 I decided to soak the dial in my watch cleaning solution while I took the movement apart - maybe that would loosen up the black paint.  Unfortunately it turned out soaking loosened up the orange lacquer too.  Ugg - now I've got a splotchy dial!

Anyway, the movement gets fully disassembled and cleaned. 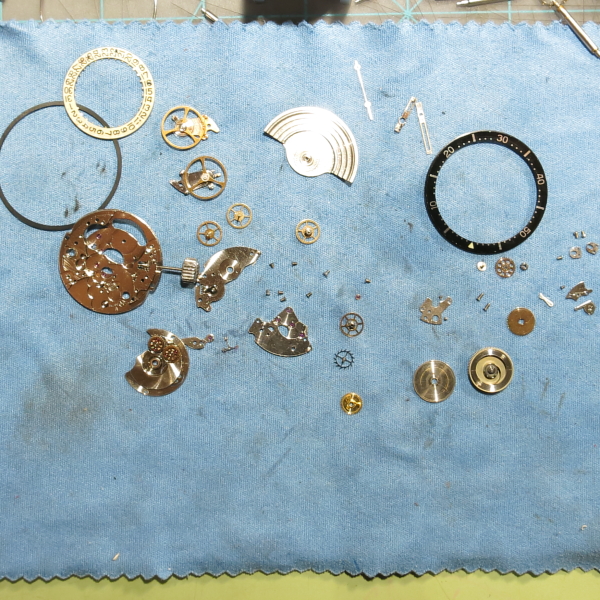 The running movement with a Hamilton balance cock is ready to go to the timer.  Hamilton's import code is HYL and you can see it near the crown wheel. 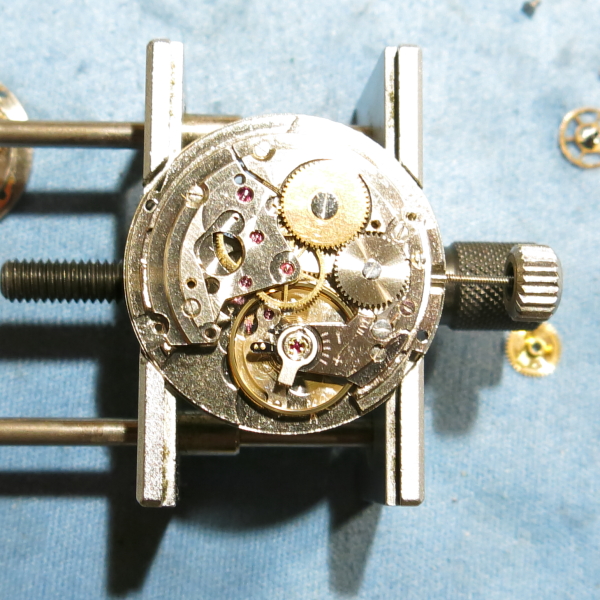 Uh oh, something is making a little extra noise inside.  I'll reclean the hairspring in case there's a piece of dust caught on it. 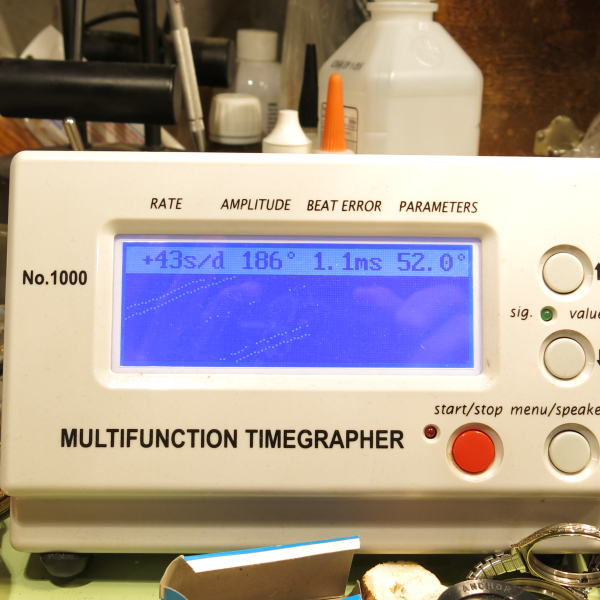 Ah, that's much better... running just a smidgen fast but that will do for now. 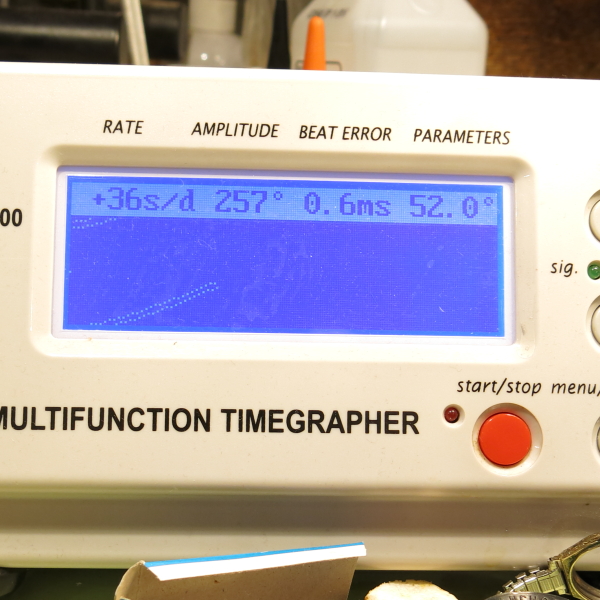 Well, I was able to remove all of the orange lacquer and black paint.  Miraculously I did not lose the printing on the dial too.  I sprayed it with a light coat of lacquer but got a little too much on so the finish on the dial isn't as good as I was hoping for - but at least I don't have to get the dial redone entirely.  I thought for sure this dial was a lost cause when the orange lacquer bubbled off.

Now I can relume the dial and hands. 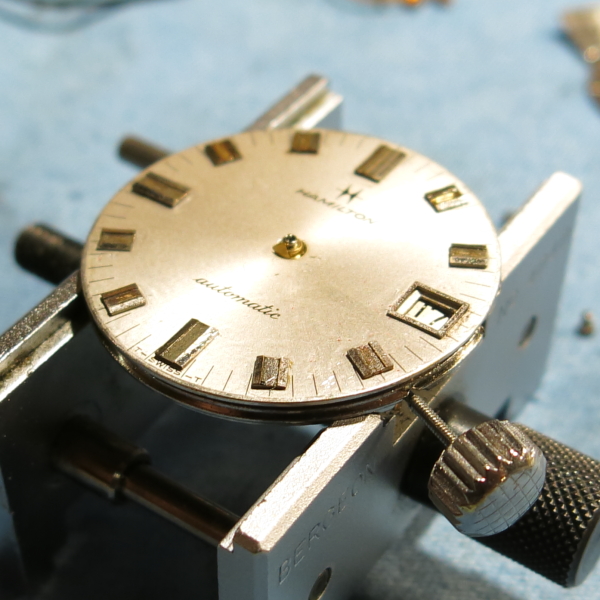 The reassembled movement goes back into the case and it's ready to be sealed up by the case back. 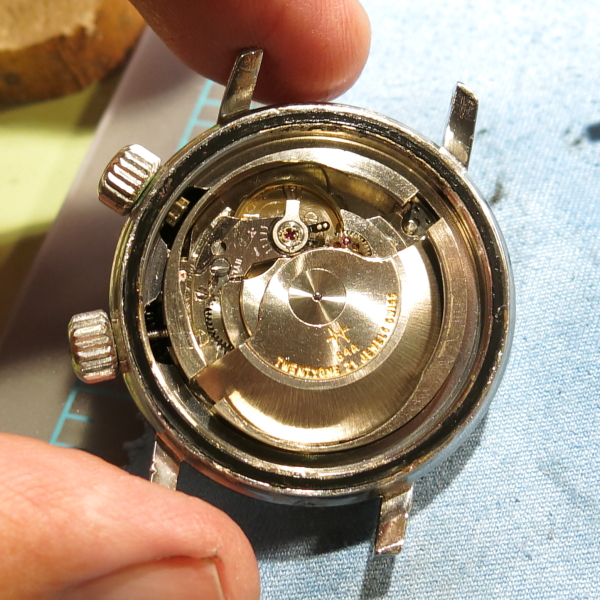 Voila!  You have to look very closely to see the uneven lacquer finish I applied to the dial, including a tiny piece of lint that got stuck to it... oh well.  The crack in the crystal is now by the 6 and it's an obvious distraction.  This watch will look even better when I replace the crystal.  I also will order a nice strap for the watch... maybe a silicone strap or something "dive-like". 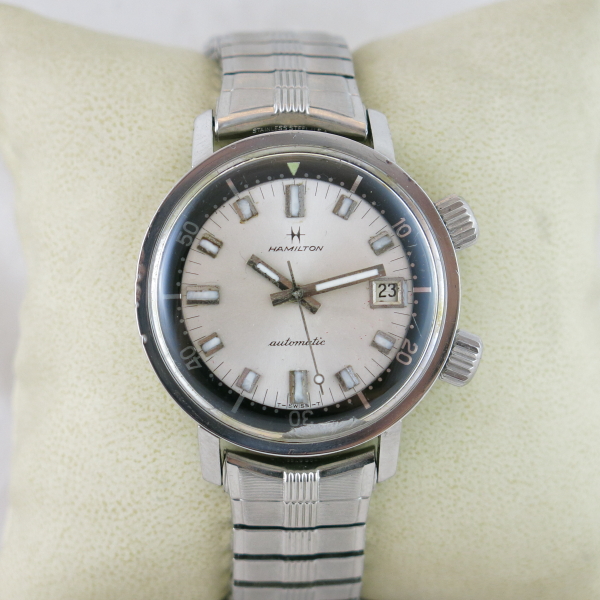 Regardless, I'm pretty happy with how it turned out and I think it looks better now that the dial and hands are re-lumed. 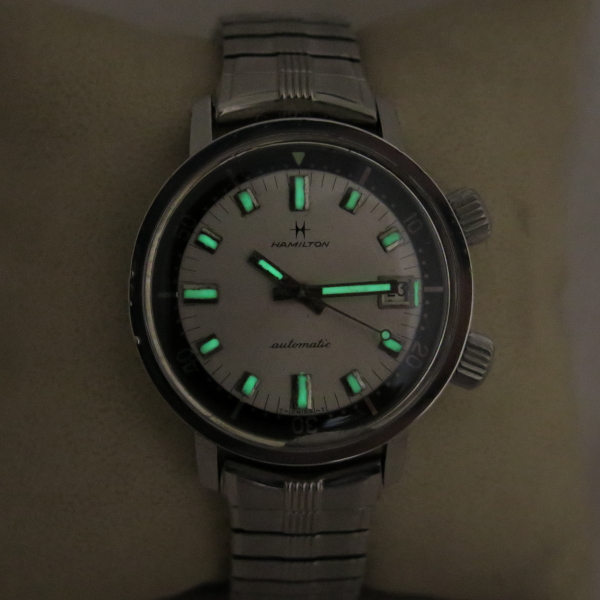 It turns out getting a proper crystal is a bit tricky for this watch.  The crystal has to have the proper diameter inside and out, depth and a white reflector ring.

There are a couple of options, one is a GS Diver Tite and another is a Tru-Seal. 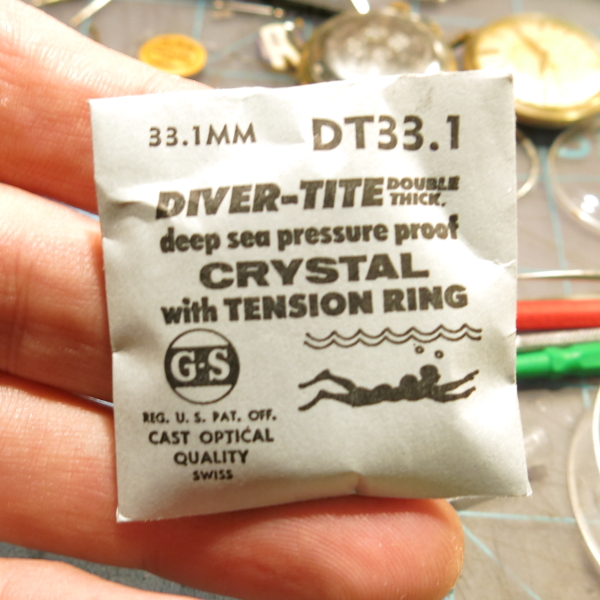 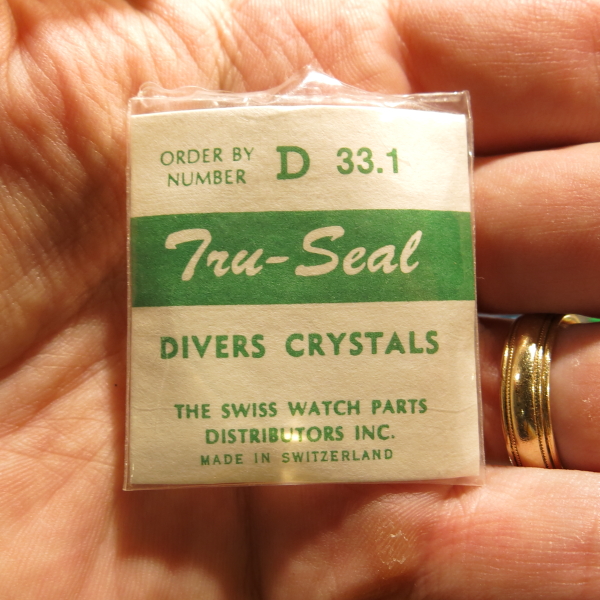 The inside of diameter of the crystal has to be able to fit elapsed time ring surrounding the dial and allow it to spin when the crystal is installed but not lift away from the gear that turns the ring.  It looks like the Tru-seal is a better choice. 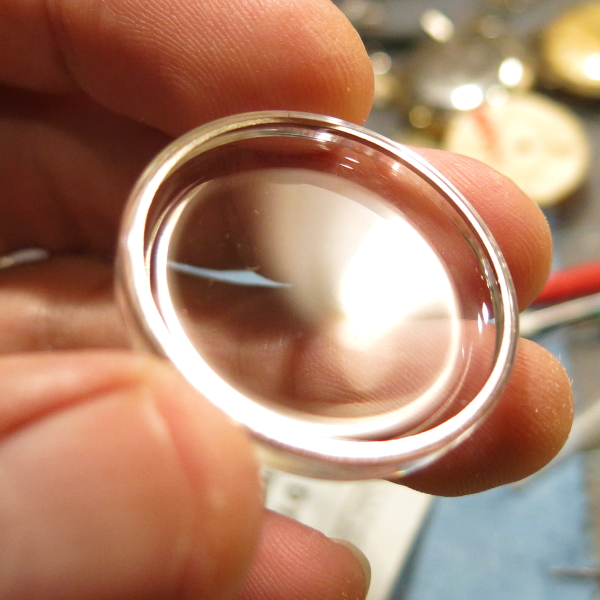 The crystal is pressed into place and when I first installed it there was too much friction holding the elapsed time ring.  I installed a very thin o-ring under the crystal and that offset it just enough to properly seat but also allow the ring to turn.

I couldn't find a rubber or silicone strap in the proper width.  I was able to find a shark skin strap though and although I'm not a fan of exotic skins from an environmental perspective, I made an exception since this is a dive watch and shark would seem to be a proper material.

This turned out to be a pretty nice project watch, don't you think? 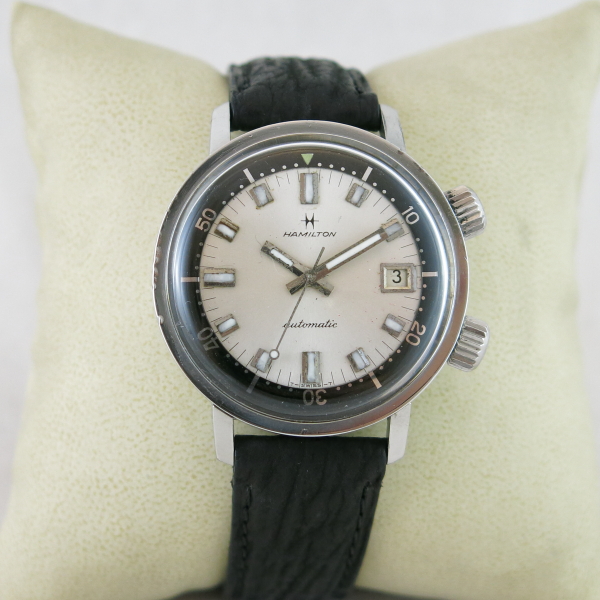