To close out September I thought I'd do a two-for-one post featuring two very similar watches.  One is a 1963 Dateline A-576 and the other is a Model 64005-4 made for the European market.

The Dateline A-576 came in a one-piece stainless steel case.  The A stands for Accumatic and it runs a 17 jewel 694 movement which is very similar to the 689A used the Accumatic line, except it has a date complication.

I recently purchased a Dateline A-576 project watch with an ulterior motive.  I was hoping I would be able to lift the date window off the dial and use it on the Dateline 64028-3 that I recently completed with a missing date window.  The project watch was very rough, not running, and missing one of the markers at the 6 position.  So I figured it would just be a donor watch. 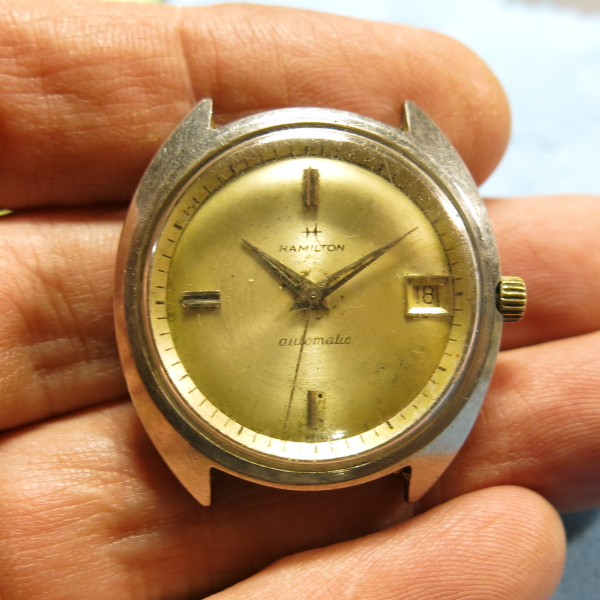 The back of the case is clearly not openable.  So this watch opens through the crystal. 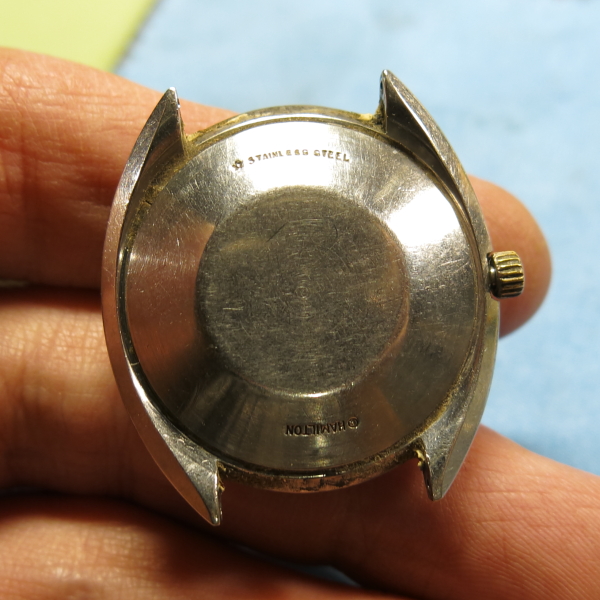 Wow - this movement is a wreck.  I bet I could get it running but with the dial the way it is, I think this watch is better suited for the parts bin.  Unfortunately the date window on the dial isn't removable - unless I cut it away from the dial (which I might try to do anyway).   So onto the real project for this blog post. 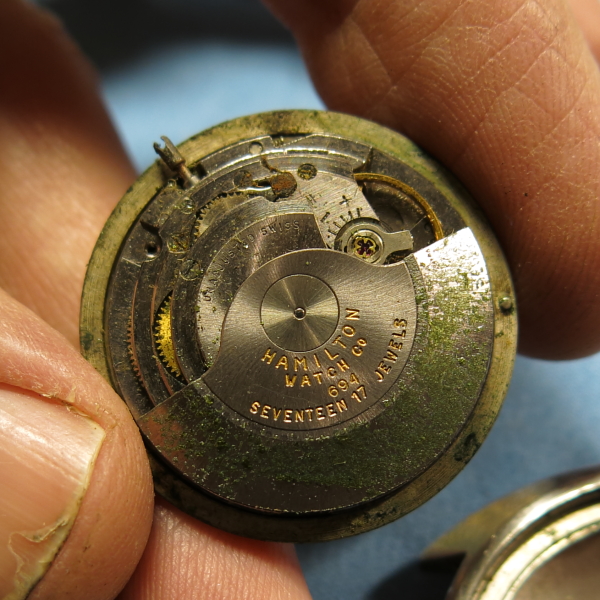 By coincidence a fellow collector sent me his "Dateline A-576" for a trip to the spa.  I thought, "Great - I'll be able to do two watches at the same time".  Once it arrived I knew immediately that it wasn't an A-576.  The case isn't stainless steel so it's not a 500-series watch at all. 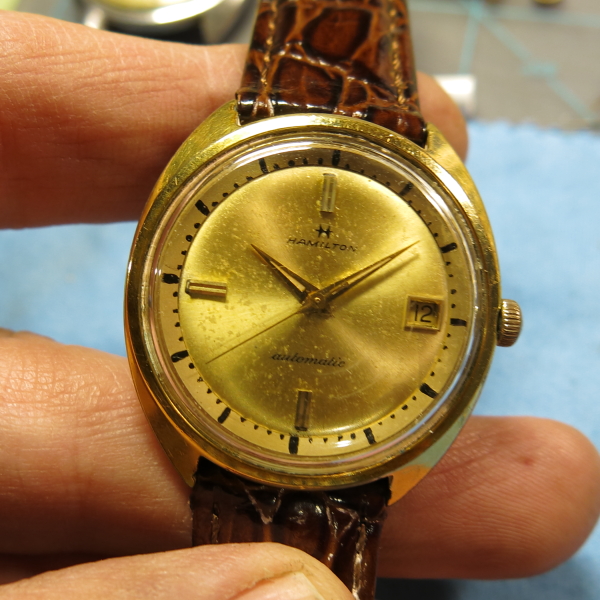 Turns out there are a couple of other similar designed models with golden cases including the 1964 Dateline A-275 - it has a solid 14K gold case. 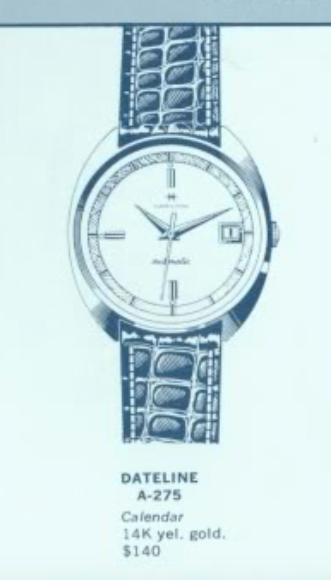 Maybe it's a 1964 Dateline A-475.  It has a similarly shaped case but is 10K gold filled.  It's dial is white though and the chapter ring is a shiny golden color. 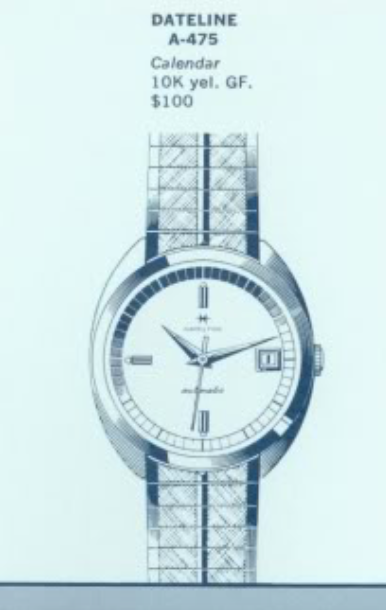 My mystery project watch has a screw-on stainless back so it's clearly not an A-275 or A-475.  In actuality, it's a European model known simply by the model number 64005-4. 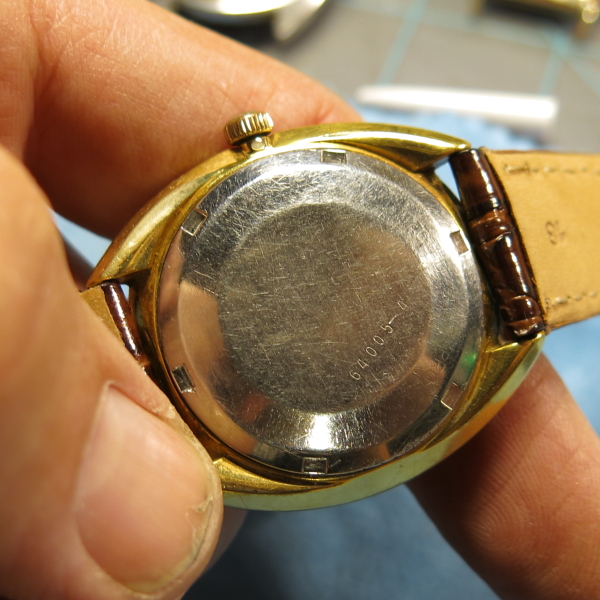 Inside the case is a 21 jewel calibre 64 movement.  This movement is based on the same ETA grade the 694 is based on.  The additional 4 jewels to make it a 21 jewel movement are in the reversing wheels in the automatic framework. 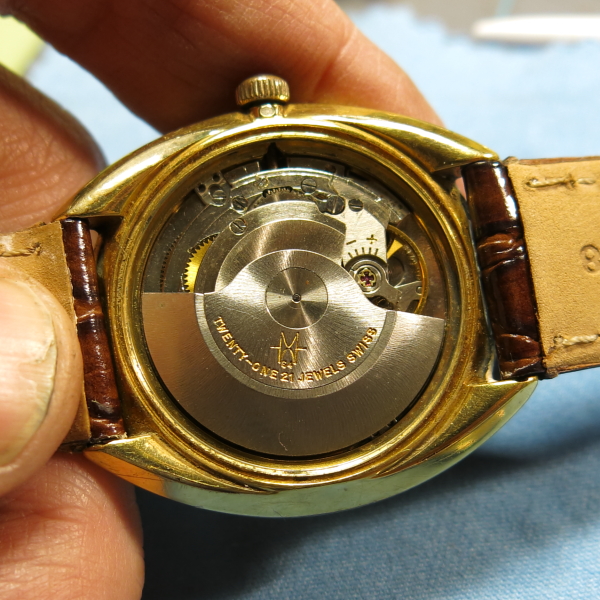 So how do I know it's not a US model?  The balance cock is missing the HYL import code that all imported Swiss movements have in Hamilton's lineup.  You can see in this shot that although the movement is shiny, it's actually very dirty. 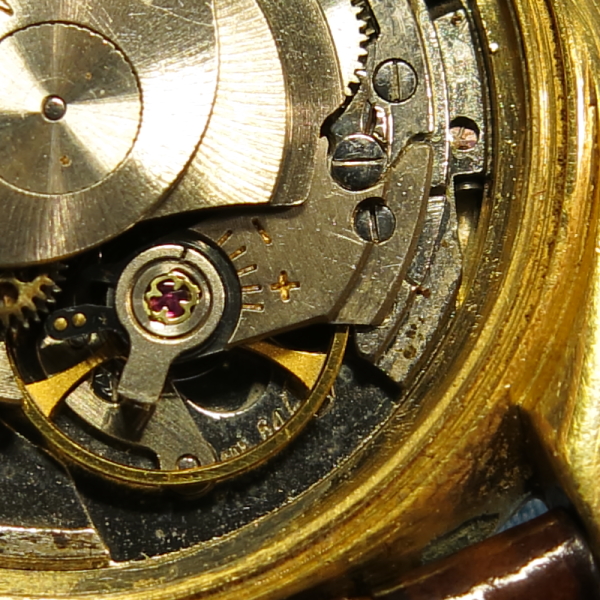 The inside of the crystal has been scratched by the minute hand and will need to be replaced.  It's almost impossible to polish the inside of a plastic crystal.  Notice the chapter ring inside.  It's very roughly printed - like someone touched it up with a fine tipped Sharpie marker.  I'm sure it didn't leave the factory in Switzerland looking like this. 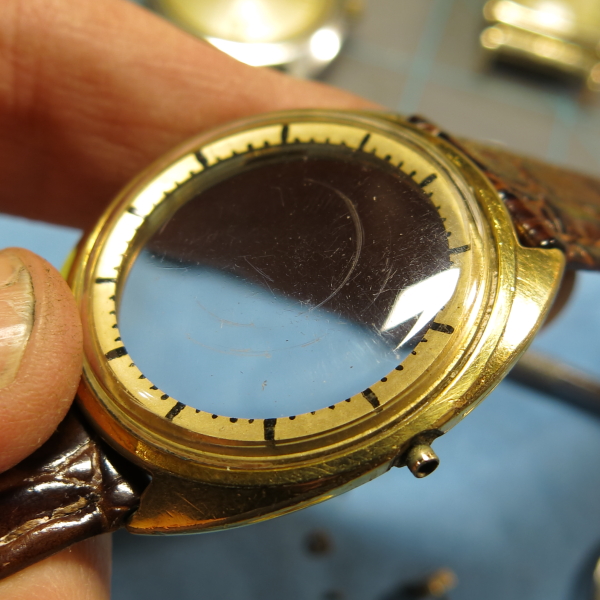 There's nothing inside the case back to indicate this is a Lancaster assembled model. 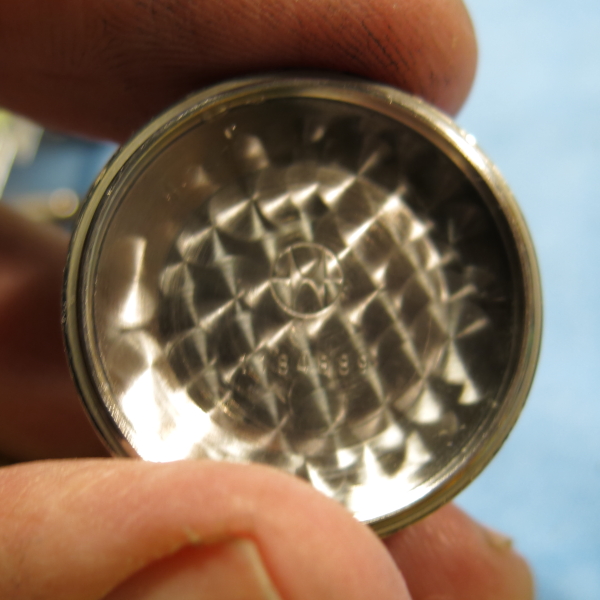 European models are stamped between the lugs with the case material.  A "-4" model could be gold filled or gold plated.  This case shows wear between the lugs from a bracelet that was installed previously. 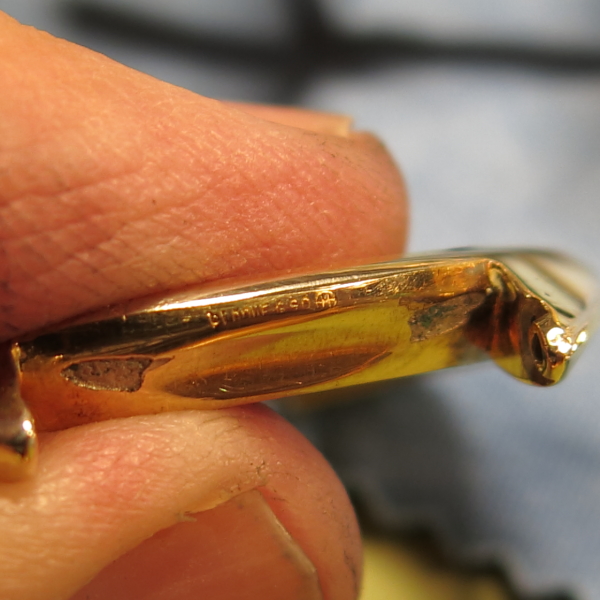 It's hard to make out what's stamped between the lugs.  I see the Hamilton logo on the right and the work PLAQUE for plated on the left.  I don't know what is in between... looks like G90? 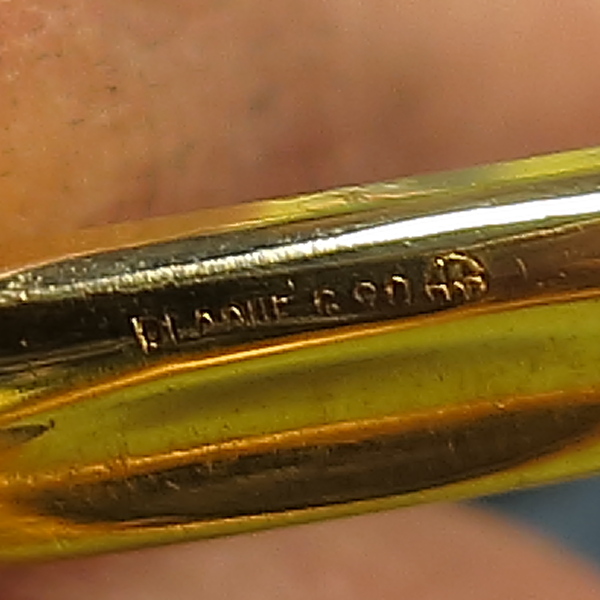 Based on the crystal I removed, I think a GS Evr-Tite crystal will be a suitable replacement.  32.1mm should do nicely.  That's a BIG crystal and this watch is actually 2 or 3 mm larger than the Dateline A-576 project watch I showed earlier. 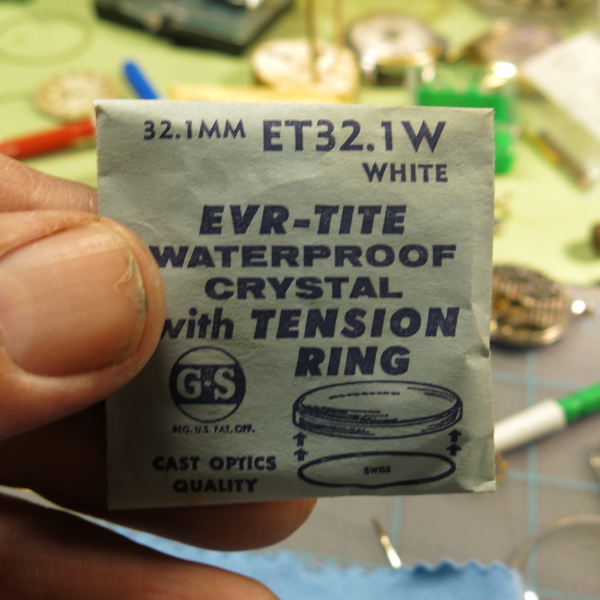 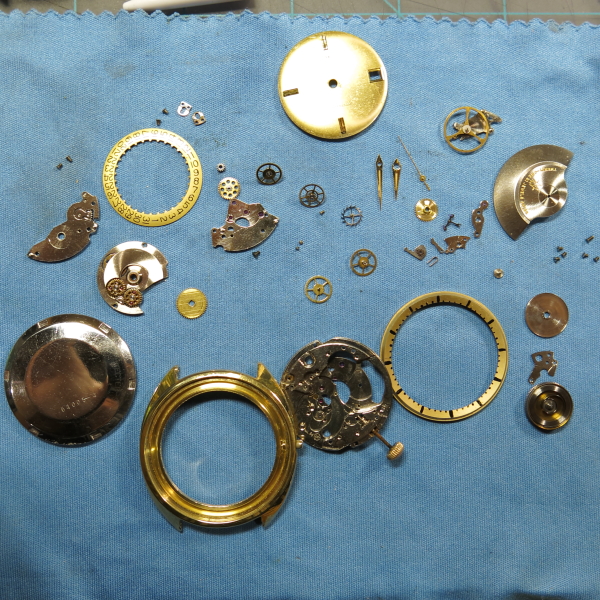 The partially reassembled movement is now running.  Let's see what the timer thinks of it. 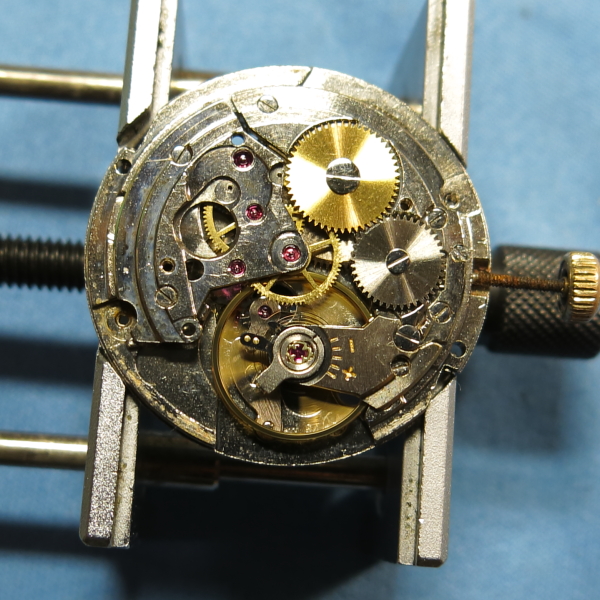 Well, an 8.0ms beat error is way too high.  Fortunately it's easy to adjust.  That's probably why it's too high - I bet someone tweaked it thinking they were adjusting the regulator.  What they really did is rotate the balance and move it out of beat. 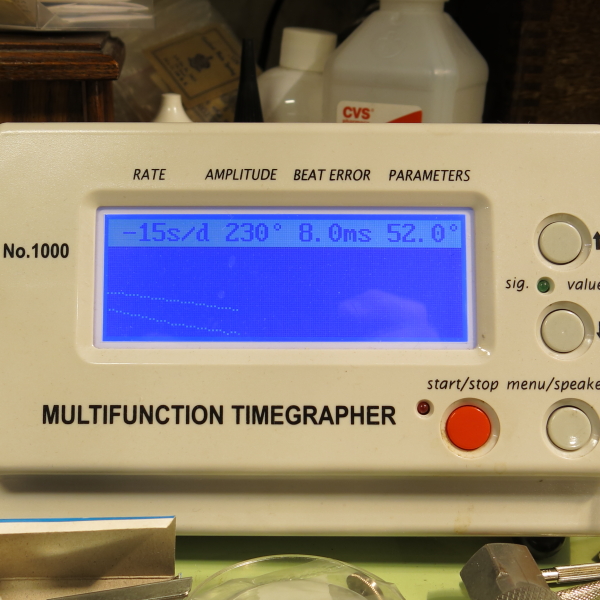 Bit by bit I move the hairspring stud so that the two lines approach each other until they are right on top of one another.  It doesn't get much better than 0.1ms.  Now I can tweak the regulator index and speed the watch up slightly. 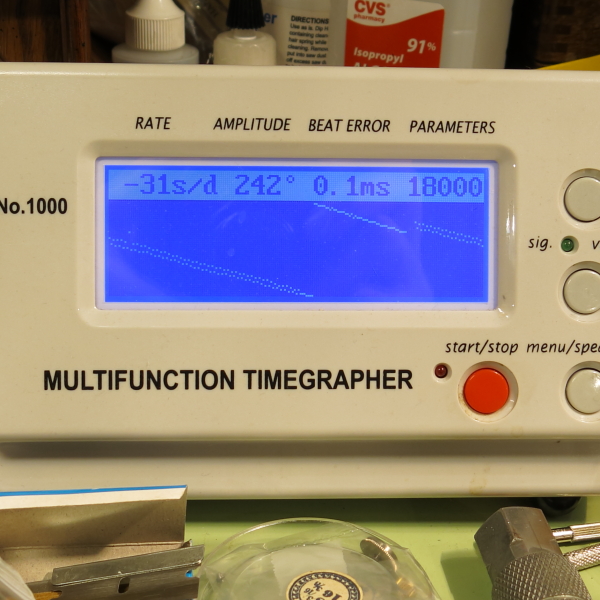 With the movement running nicely I can flip it over and reassemble the front of the main plate. 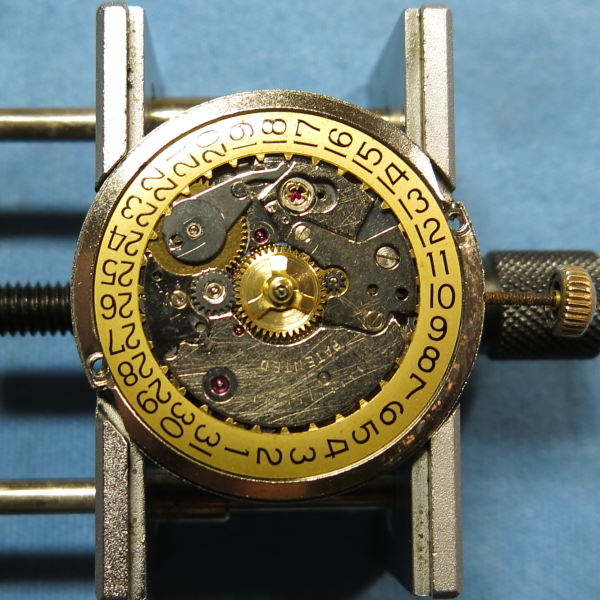 I put the dial on and then slowly advance the time until the date changes.  Then I can put the hour and minute hands on to indicate it's midnight (when the date should change). 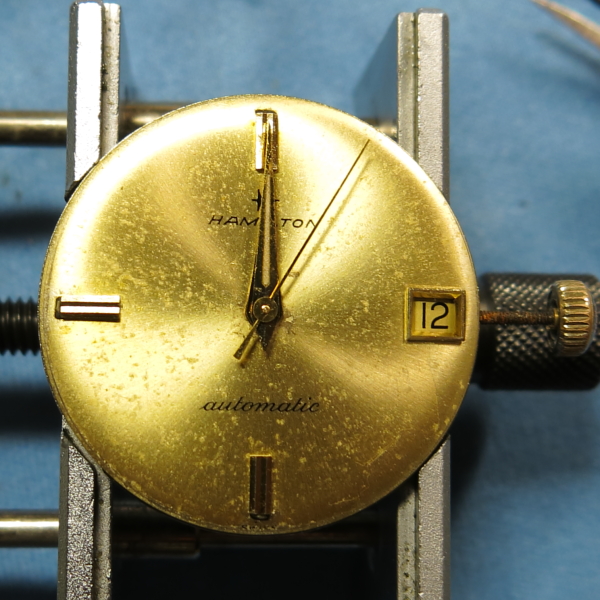 You can see the stem on the watch is a bit rusty.  That's because the gasket in the crown has failed.  It's very worn as well so I will replace it with a similarly sized tap 10 waterproof crown for a 2mm stem tube. 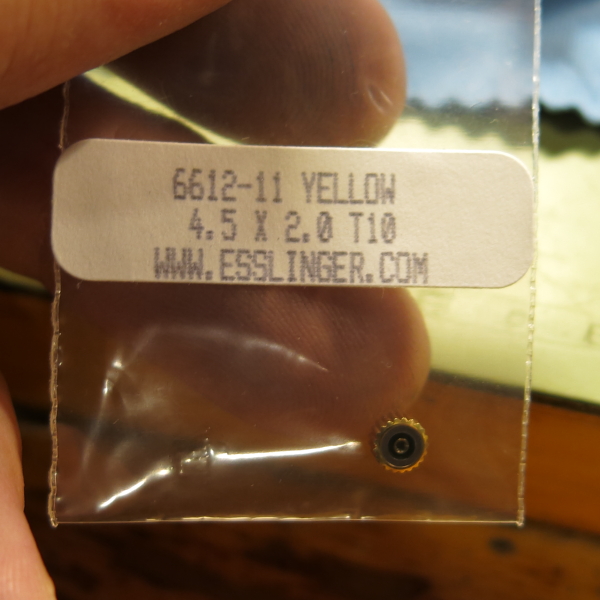 You can't make chicken salad from chicken crap.  There's no way of getting around the sharpie-printed chapter ring and the finish on the dial has been compromised by the same moisture that rusted the stem.  But the watch is now as good as it's going to get and it's really not that bad. 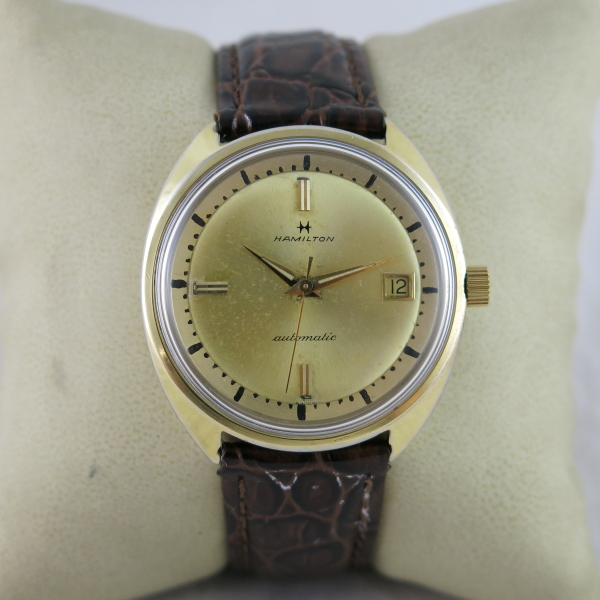