Prior to 1969 Hamilton was considered an "American" watch company but that doesn't mean they didn't export models or make models specifically for for other markets.  For example, the Electric Ventura is arguably one of the most popular Electric models and was produced in solid 14K yellow and white gold.  However, 18K yellow gold models were made for the European market and 18K rose gold models were made for the South American market.  The 18K versions are especially sought after and valuable today (probably $15,000+).

Export models were not cataloged but many are known to exist and identified by their case numbers.  One of them is the 64028-3 and 64028-4.  The -3 designates the model has a stainless steel case.  The-4 designates a yellow case... electro-plate, perhaps filled, etc.  I say "export" but it's quite possible that it wasn't even assembled in the US.  It could just be an European model, as you'll see below.

I had done a post on the 64028-4 back in 2012.  It's an interesting model because it's one of a small handful of asymmetric models with automatic movements. It's cushion-shaped case appears to have been inspired by the 1962 Electric Taurus.  The crown position at 4:30 makes for an interesting look and is also very "Electric-like". 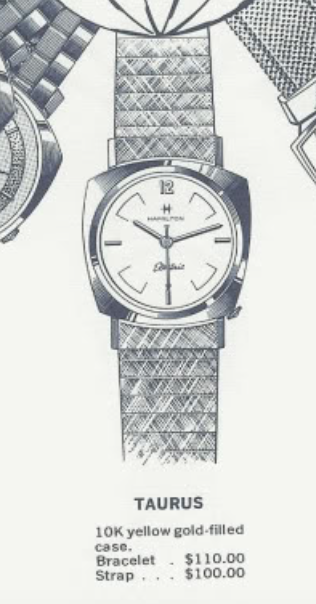 I would estimate that the 64028 models would be considered Dateline A-somethings from the late 1960s because of the movement used inside as well as the similarity to other cataloged models produced at that time.

I recently came upon the stainless steel version known as the 60428-3 and it was in need of some TLC.  The dial on the -3 version is significantly different than the -4 version.  This watch looked a little odd to me and it took me a while to realize that it's missing the frame that surrounds the date window.  So the opening is a little larger than would normally be the case. 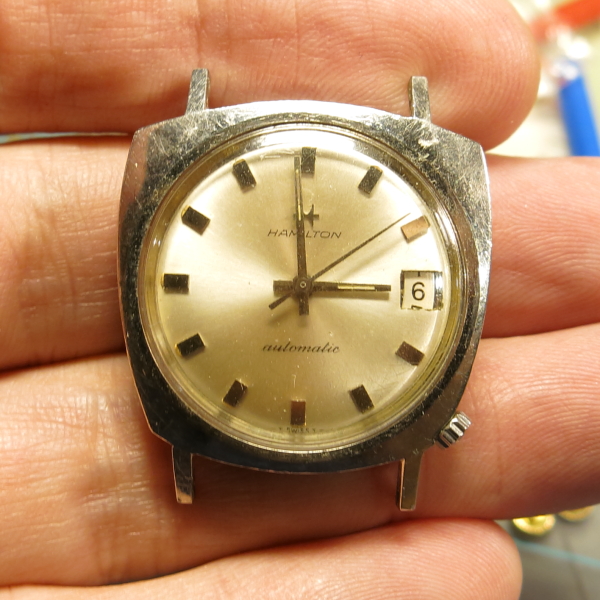 The etching on the outside of the case back makes identification very easy. 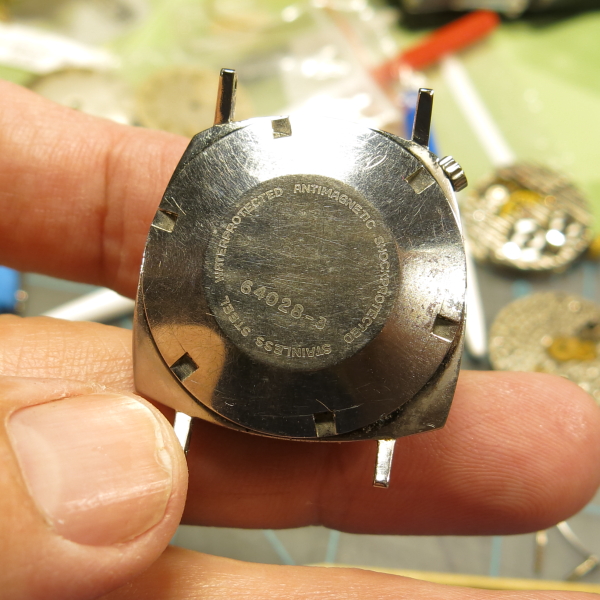 Opening the case back reveals a 21 jewel Hamilton 694A automatic movement.  This movement appears to be in good shape but everything inside has a sticky oily residue.  I guess it was well-preserved but it definitely needs a thorough cleaning. 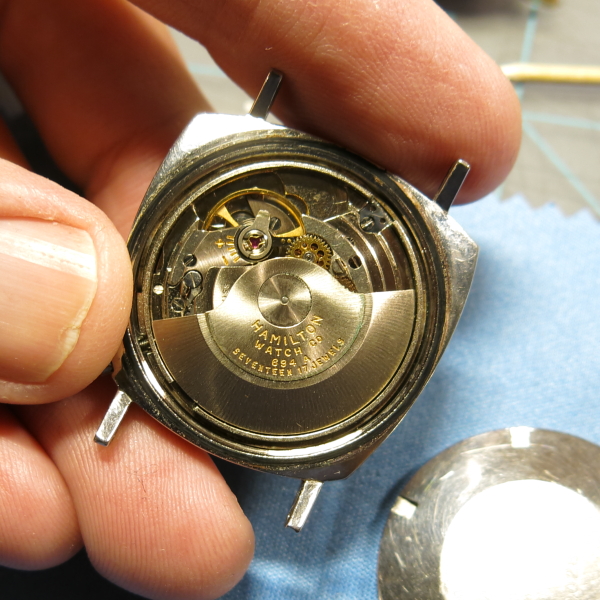 Here's a close up of the dial after the movement was removed from the case.  I was hoping I'd find the window frame loose inside the case somewhere but, alas it's missing in action, along with some of the lume on the hands. 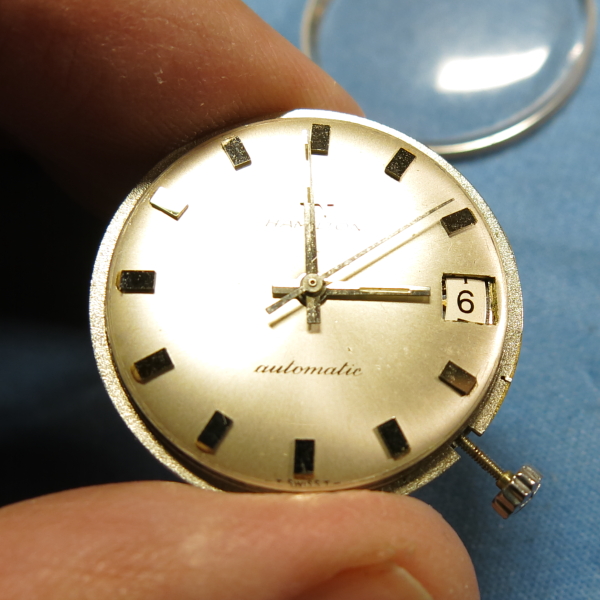 The dial and hands are removed and I can set to work stripping parts from the front of the main plate.  I've been getting a lot of practice with this setup lately, as a lot of my recent projects have had date complications. 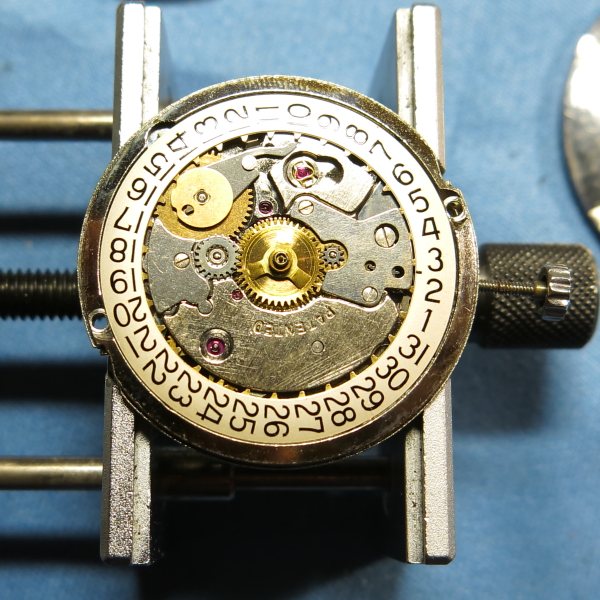 You can tell from the back of the dial that the markers (and presumably the window frame) are riveted on and each of the tiny post are shaved off as part of the riveting process. 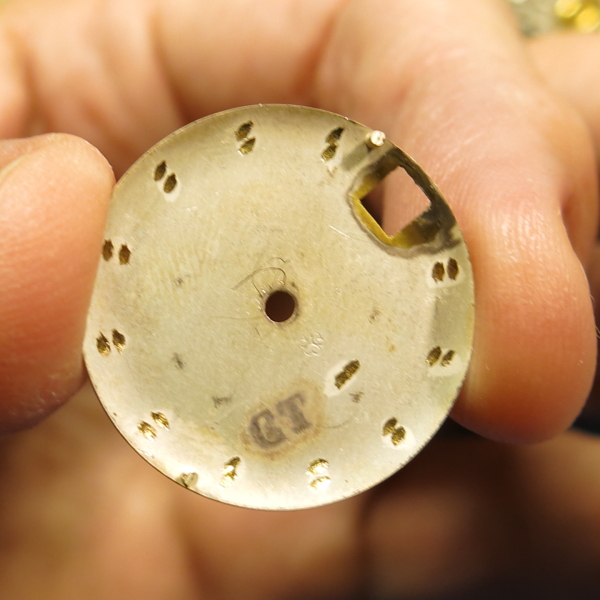 The movement is cleaned, the case is polished and the crystal is buffed.  Time to put it all back together again. 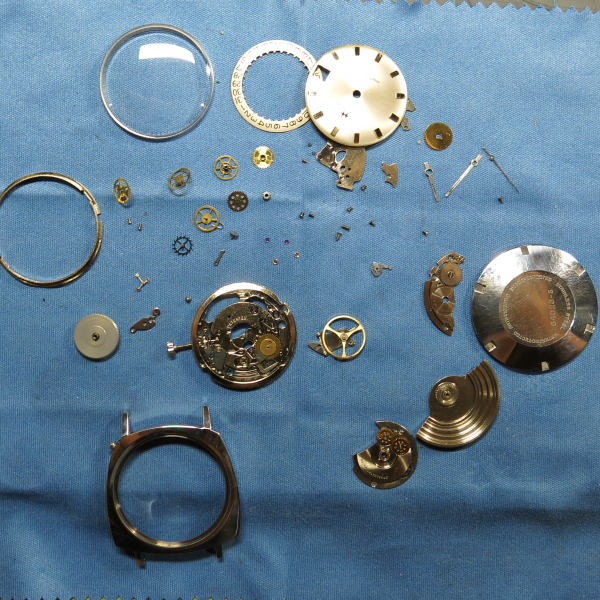 The movement is reassembled and ticking away with good motion.  I'll check the timekeeping before I bother reassembling the front or the automatic framework. 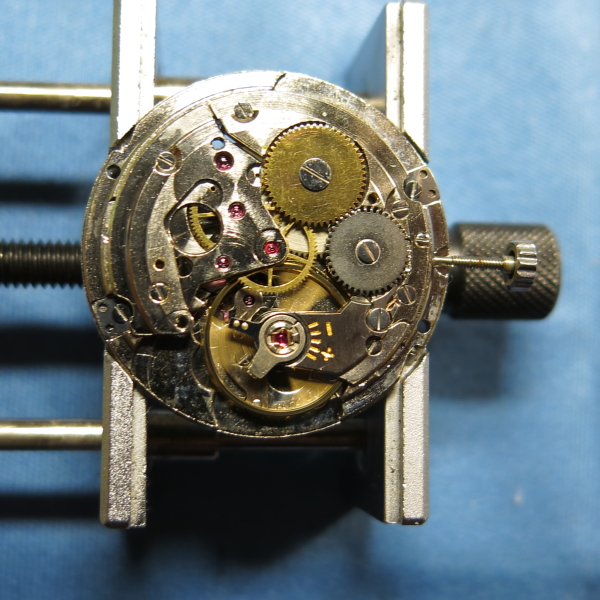 Yikes... something is making extraneous noise inside.  It doesn't take much to throw the performance off... perhaps some dust or a tiny filament from my blue microfibre cloth. 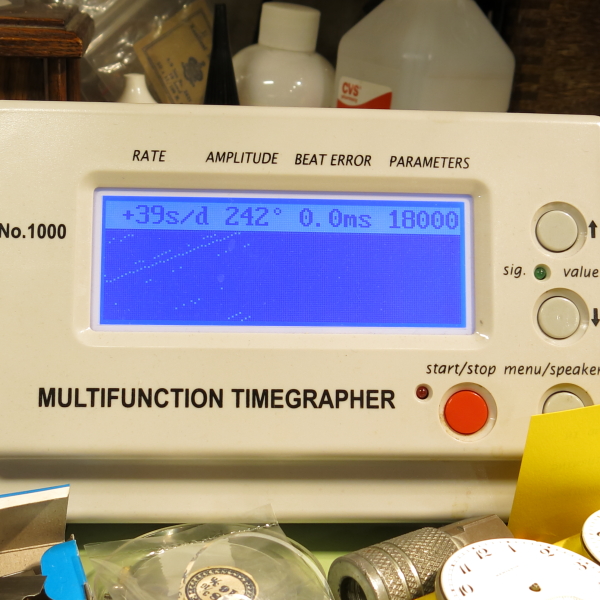 The hairspring and pallet fork were re-cleaned and now I've got a clearer signal.  The beat error is way too high though.  That's not surprising as the hairspring stud looks like it's out of it's typical position. 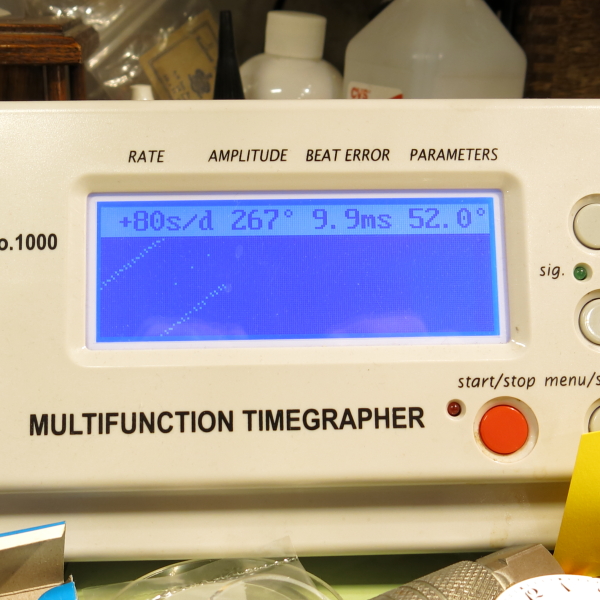 Adjusting the hairspring stud centers the balance assembly and puts the watch better "in beat".  It's still running fast though so now I can slightly move the regulator index and slow the watch down. 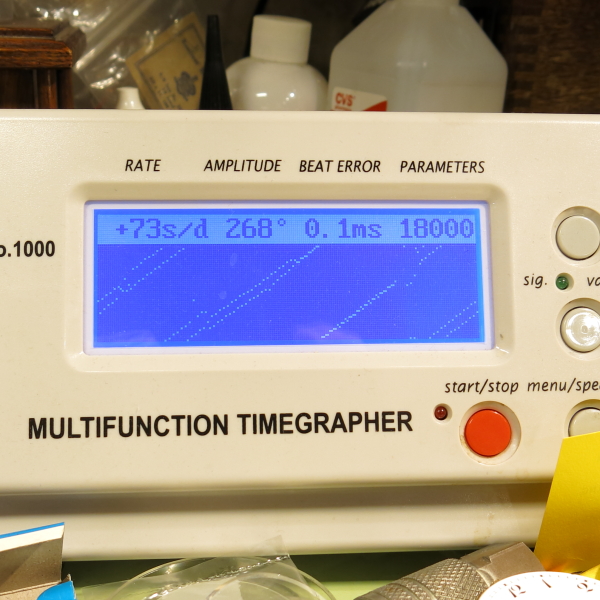 These types of adjustments should only be done with the assistance of a watch timer.  You can really goof things up without a timer to tell you how it's running.  Adjustment requires a steady hand and the timer will tell if you're making things better or worse. 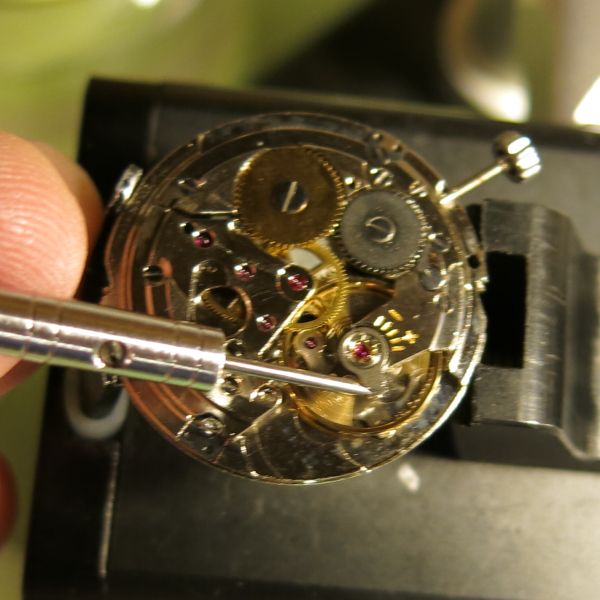 The beat rate has been slowed nicely and I'll leave it running a smidgen fast while I reassemble the rest of the movement. 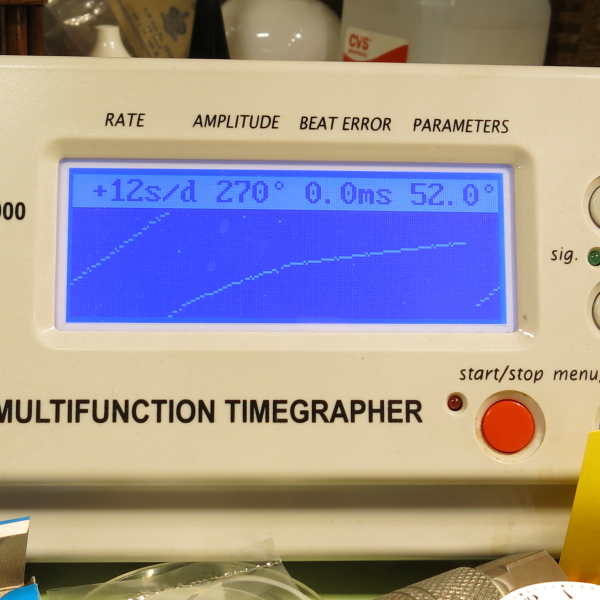 A small dollop of microgliss lubricates the set lever and now I can go through the tedious task of adding all of the parts for the calendar complication. 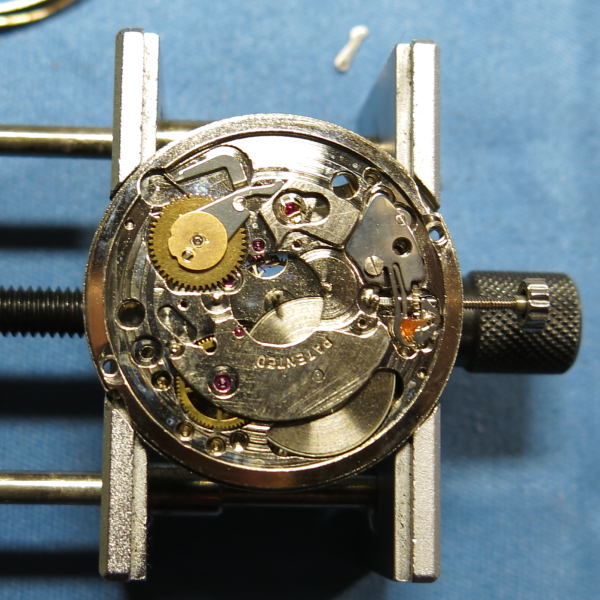 This model must take a special date wheel - notice how the stem is between 12 and 13.  Typically the number should be centered with the stem but this model has the stem at 4:30, not 3:00.  The numbers on the date wheel must be shifted accordingly. 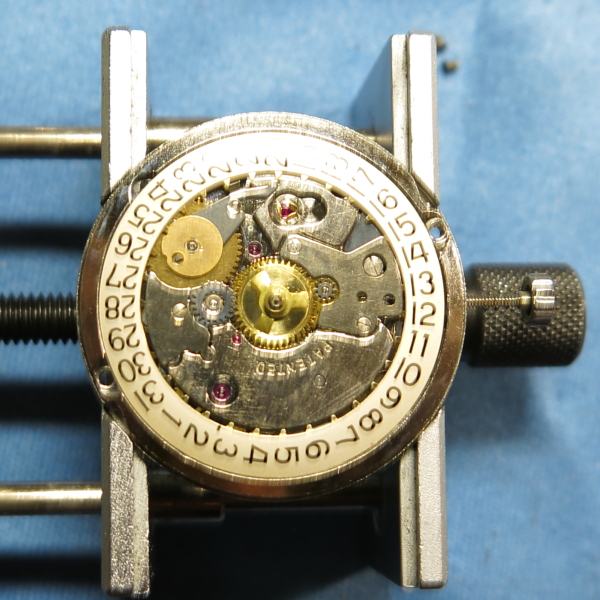 Well, I have to say this watch turned out better than I expected.  I wish it had the frame for the window opening but it still serves it's purpose.  I relumed the hands and polished the case and buffed crystal really brings the watch back to life.  Paired with a genuine lizard strap in black, this monochromatic model is ready for wrist time. 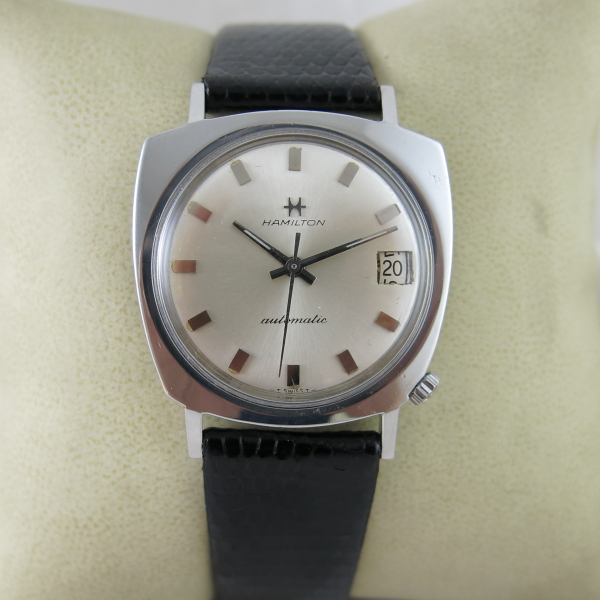 Since it's been five years since I last looked at the 64028-4, I decided to treat it to a spa visit as well.  So here's a photo of the two export siblings for direct comparison.  Which one do you prefer? 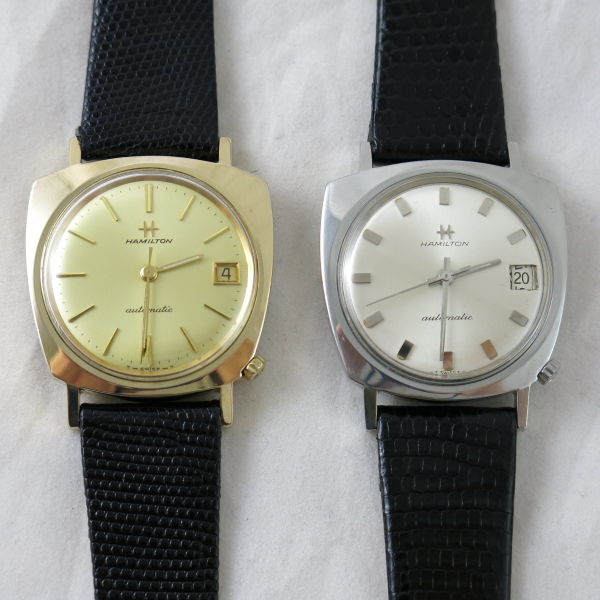 I happened upon another stainless steel example with a proper dial.  Now I have the parts to complete my original watch. 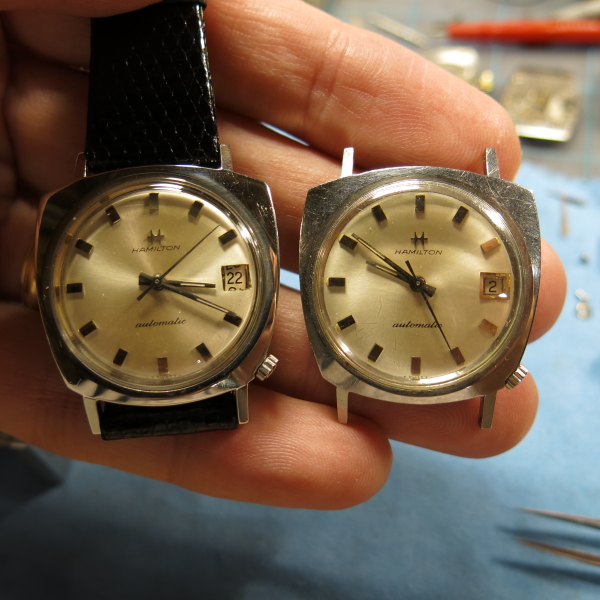