In my last post I told the story of how the Hunchback of Notre Dame wanted to retire.  Unfortunately, he wasn't able to, so he kept his ad in the paper, "Wanted Bell Ringer, apply in person at the Cathedral of Notre Dame".

After a few days another applicant arrived and Quasimodo checked him out closely.  It wasn't hard to realize that this guy had no arms either.  So Quasimodo told him, "No way!  The last guy who applied had no arms and he ended up getting killed.  I'm sorry but I can't let you do it."

The man said in reply, "Oh please, Mr Quasimodo.  That man was my brother and with him passed away we are in terrible straights.  The responsibility for our family has fallen to me and I have no other way of providing for them!"

Again Quasimodo was moved by the man's selfless dedication to his family so he said, "Okay, it's 1:00, let's go ring the bell".  Together they climbed to the top of the bell tower.

Quasimodo said, "okay - do your thing" and the man steadied himself, leaned back and then quickly swung forward and slammed his forehead into the bell.  "BONNNGGG", the bell clamored as it swung away and as it came back it knocked the still-dazed man off the church tower and he plummeted to his death.

Quasimodo ran down the stairs and out the front door, parted the crown and stood over the body.  The same policeman was there and said, "Well?  Do you know this guy?"

The Hunchback said in reply, "No - but he's a dead ringer for his brother!"

Hamilton watches tend to look familiar to each other.  Although models have different features, details like the solid gold numerals are the same style and size, as is the Hamilton logo, and the construction of the cases are very similar.

In the 1950's I think Hamilton went through the equivalent of their "ugly stage" of puberty.  Some of the models really bordered on odd-looking with horological bucked teeth and bowed legs.  Check out the 1954 Hamilton Kenmore if you need an example.

Furthermore, you will find a lot of jeweler-recased watches from the 1950's where a jeweler recased a 1930's Hamilton movement in an aftermarket case, either because the original case wore out or perhaps it was scrapped for gold.  These watches often say Hamilton on the dial but they just don't look quite right.

However, there are some legitimate models from the time period that upon first blush you might wonder, "Is this really a Hamilton?".  One of them, I think, is the 1953 Berkshire.  It's not an ugly watch, but it's not a dead ringer for it's brothers, either. 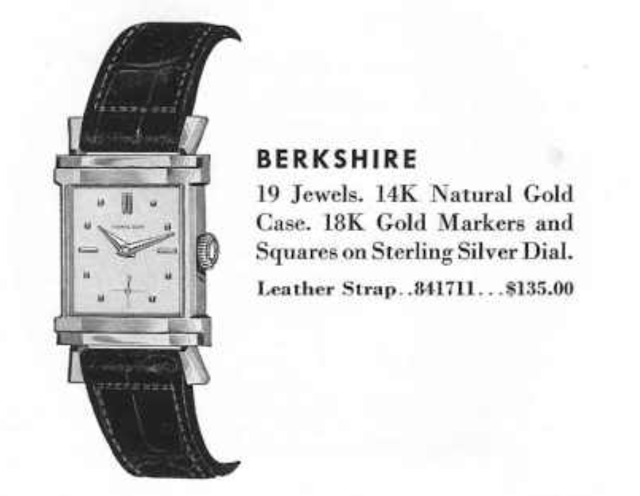 I really can't think of older models that look much like the Berkshire.  The Berkshire may mark the first use of dauphine-style hands, although lots of later models use them too.  The flared lugs remind me of the Trent - but that model came out in 1955.

My Berkshire project watch is a very nice original-looking example.  The crystal on this watch is very small - I didn't measure it but it's probably the smallest crystal I've come across to-date. 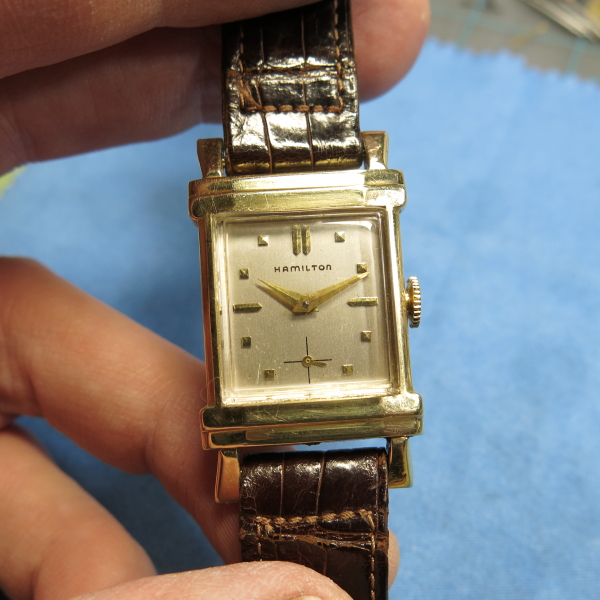 This watch has an original Hamilton gator strap - a rare find. 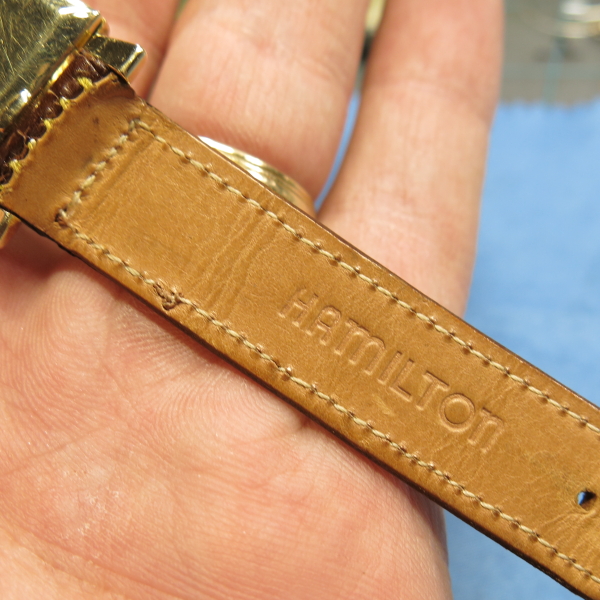 It also has an original Hamilton 14K buckle - an even rarer find. 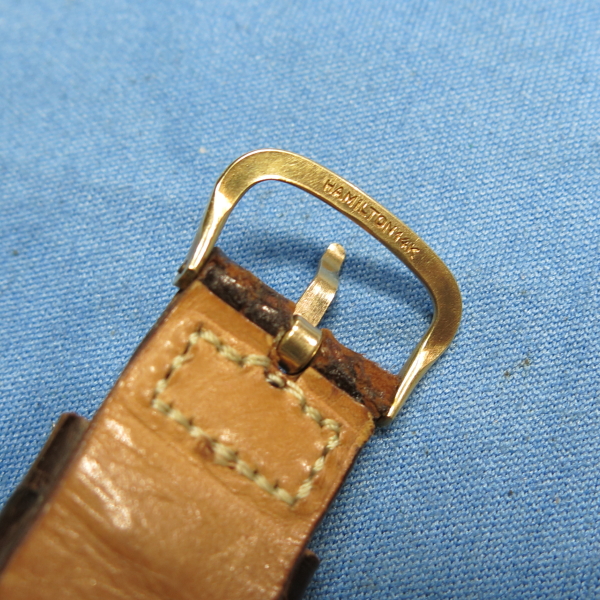 The case back shows some wear but it's mostly unremarkable. 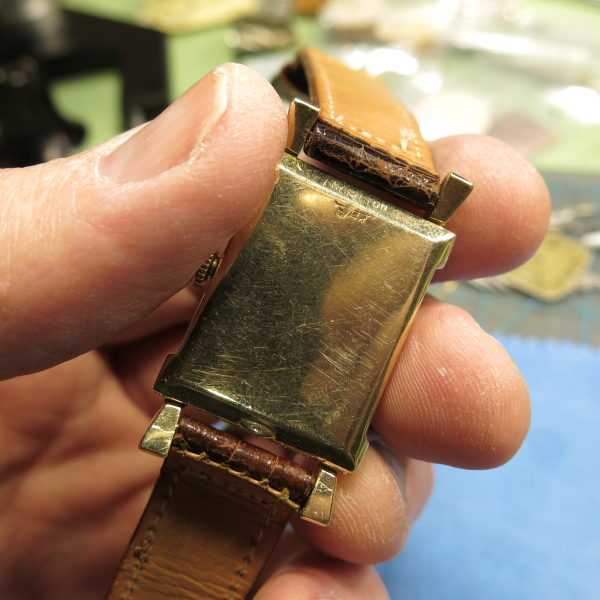 For the record, the finger prints on the dial are not mine.  I can tell by the notch on the side that this dial has been refinished at least once. 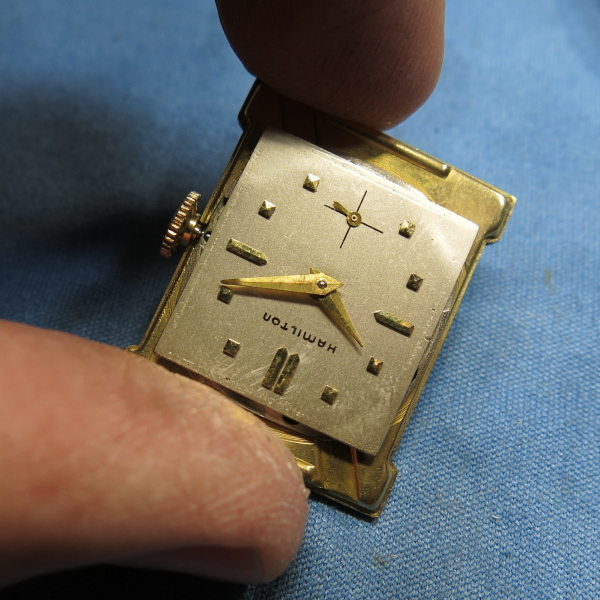 The 754 movement replaced the 982M movement that was used until 1952.  Like the 982M, the 754 has orange enamel in the engravings and is more finely finished than the other 19 jewel 12/0 sized movement, the 753.  This particular movement is a bit dirty, it's fully wound and not running.  Notice the regulator is set to full-slow. 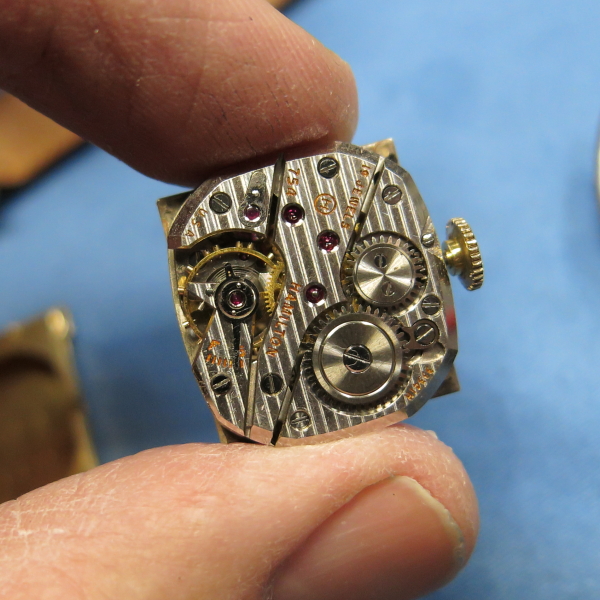 The back of the dial has a couple of sets of numbers so it's likely been refinished more than once. 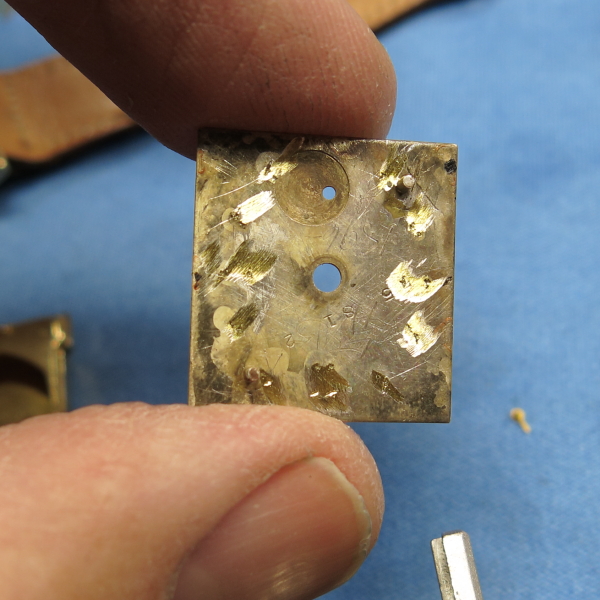 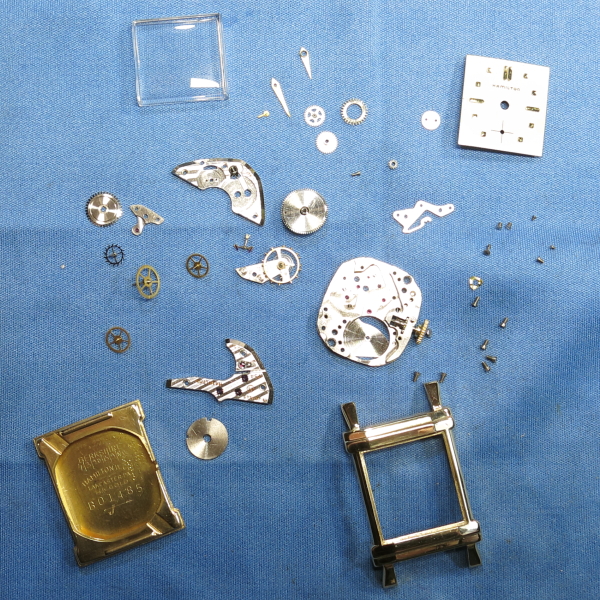 Check out the side of the barrel - it's been dented in order to install a Swiss tang-style mainspring instead of a T-end spring like Hamilton used.  So the mainspring inside isn't an original Hamilton part.  As long as it's the correct size, length and strength it should work. 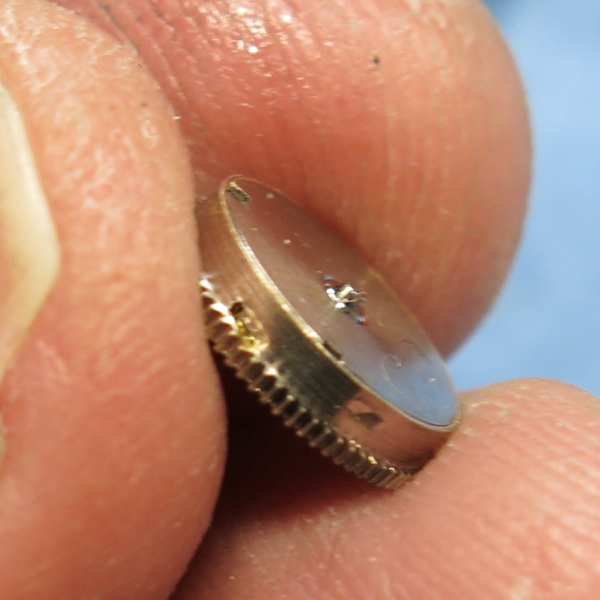 The reassembled movement is ticking away with good motion.  I set the regulator back to the center. 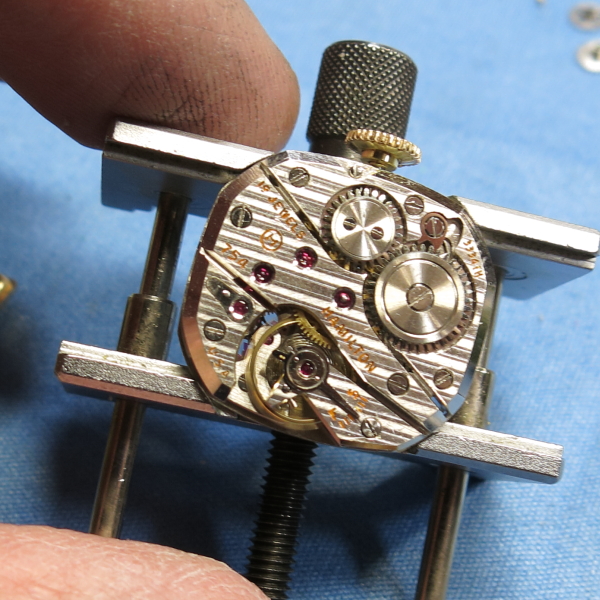 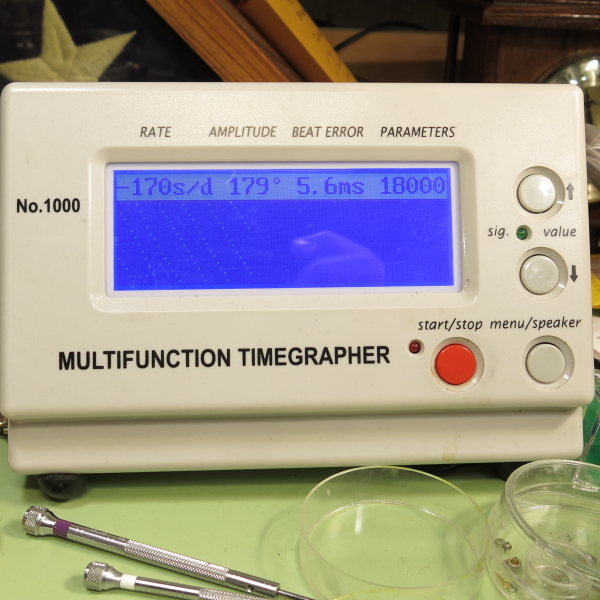 There... the amplitude is increased nicely.  Next I'll try to better cetner the balance's impulse jewel by adjusting the position of the hairspring collet on the balance staff.  That's easier to say than do, and it's not really that easy to say. 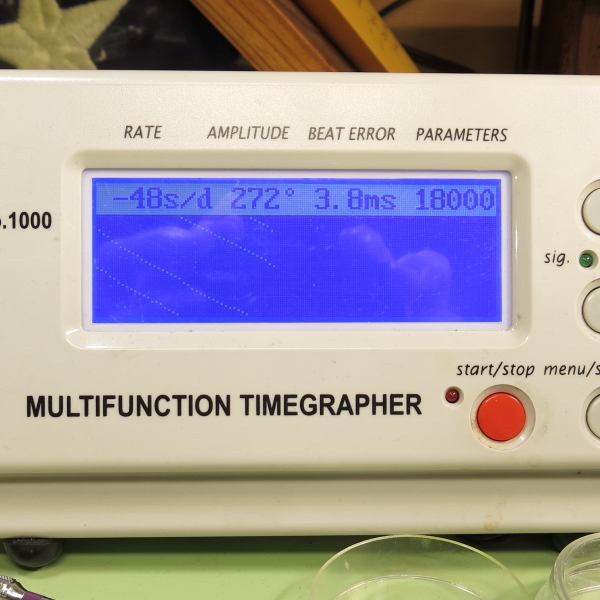 Alright, a beat error of 1.4ms is well within my specs.  Now I can give the regulator a slight tweak and speed the beat rate up a smidgen. 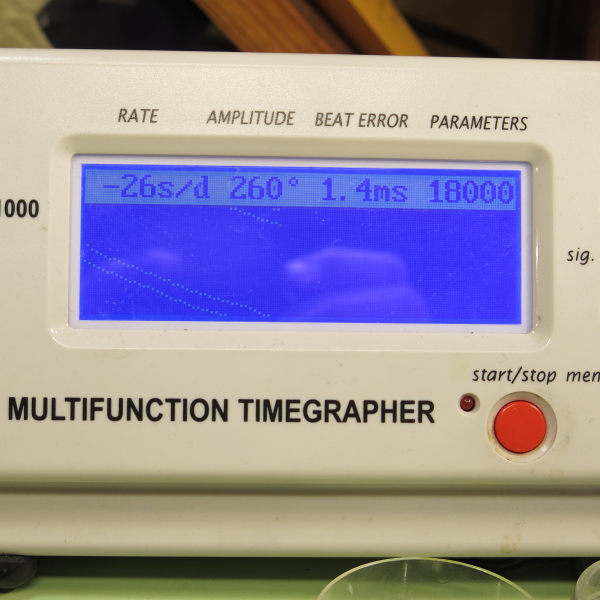 Well, the finished watch looks a little better than what I started with but it didn't look too bad to begin with.  I very gently polished the case so that I wouldn't lose any of the edge details.  Beyond that I didn't do too much to the outside of the watch.  The big difference is it's now running - and that makes all the difference in the world. 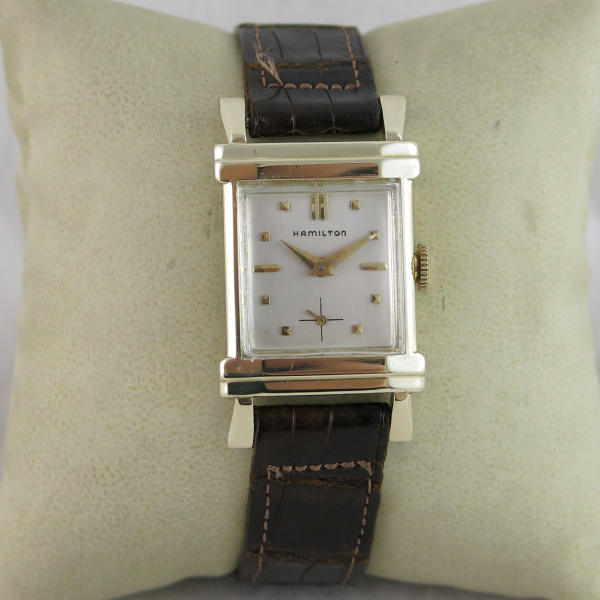