One of the really interesting complications a watch can have is an alarm.  Hamilton's first alarm watch was introduced in 1957 and called the Chanticleer.  The model was produced through 1959. 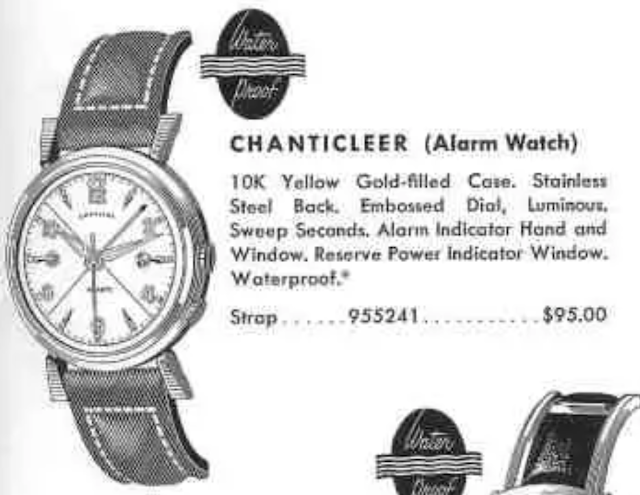 Then in 1971 Hamilton introduced four different Alarm models, cleverly named the A, B, C and D.  They are also very popular and are very hard to come by.

Although the Chanticleer and the Alarm A-D models had alarm complications, they didn't use the same movements.

I haven't personally landed a Hamilton alarm yet and I've been reluctant to take on any one else's, less I goof it up and not be able to replace it.

Fortunately, a friend of mine made me an offer I could not refuse.  He had recently been to Russia and picked up a Poljot Soviet-made for minimal expense (less than $25 as I recall).  So if I screwed it up he wouldn't be too upset with me. 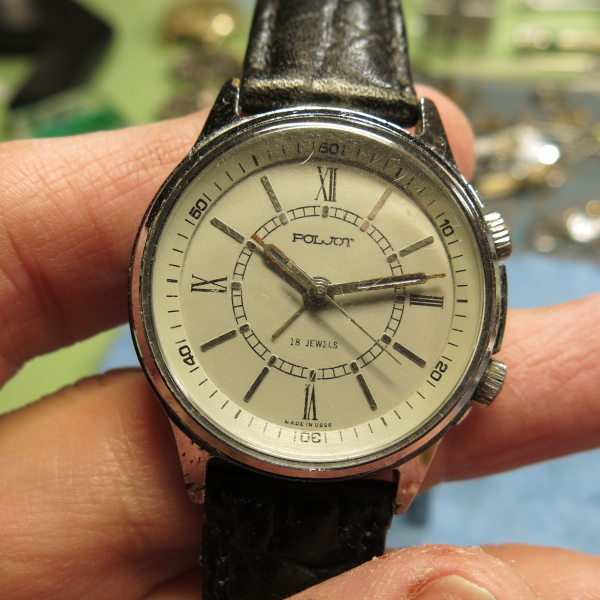 What made the offer even more enticing is he was able to pick up two.  So if I really goofed up and lost a part or something, I might still be able to scavenge together one. 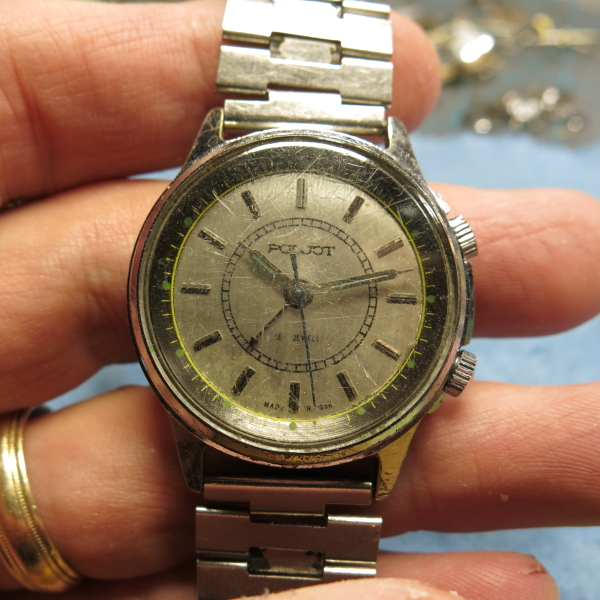 I figured since I haven't done a Hamilton alarm yet, it would still be interesting to see what makes one tick - pun intended.  It turns out, the movement in the Poljot is a little similar to the Venus 231, but not exactly.  The movement inside is a Poljot 2612.1.

I decided to work on the rougher of the two watches, just in case something happened.  The back of the case has a pie pan cover with a screw-on ring.  It also has a thick layer of communist funk. 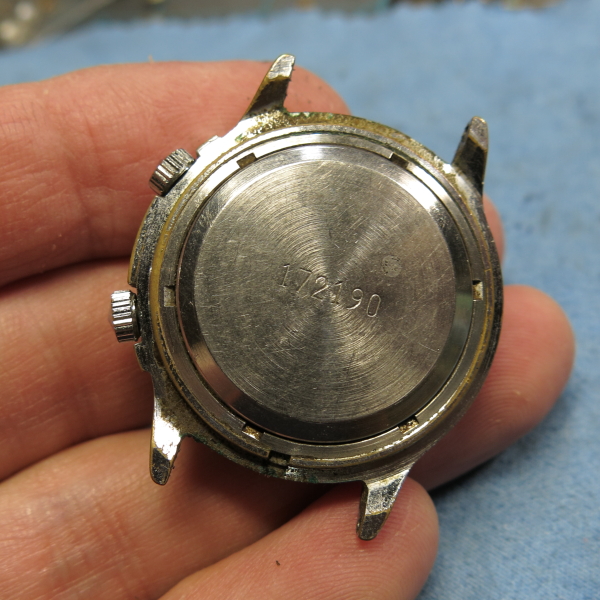 The inside of the back cover has an anvil that the alarm hammer smacks against.  It's offset so you can rotate it adjust the force of the clatter is makes. 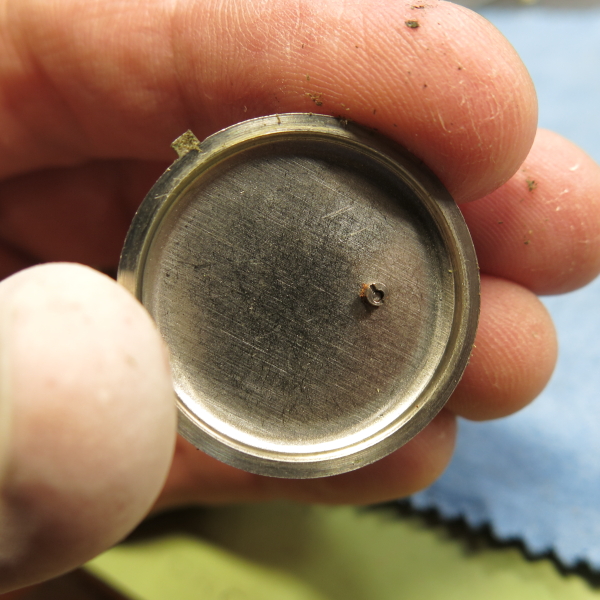 The movement inside an 18 jewel grade and if you look closely you may notice there are two mainspring ratchet wheels.  The smaller one is for the alarm and the larger one powers the movement. 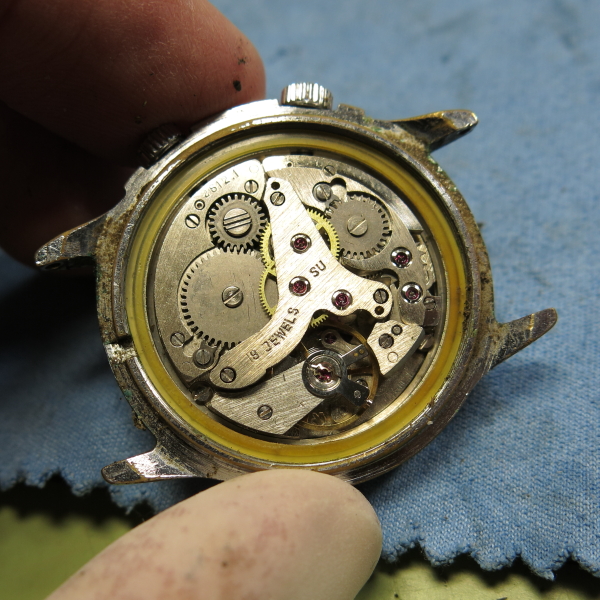 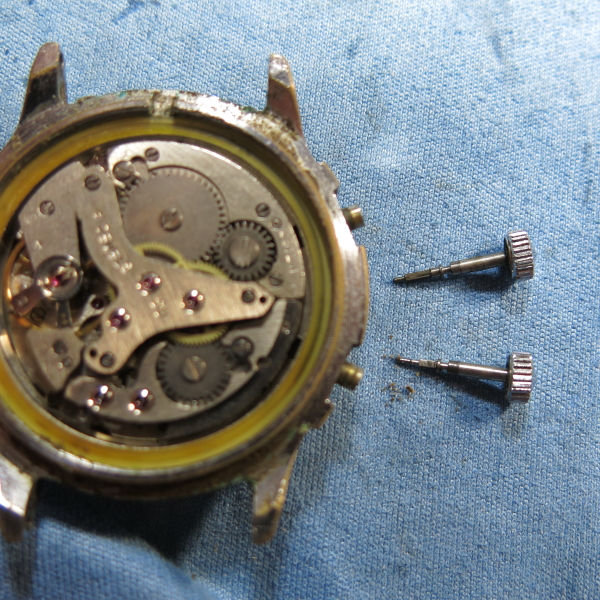 There are four hands on the dial, the extra one with the arrow tip is the alarm hand and when the hour hand aligns with it the alarm will go off.  There are two ways of keeping the alarm from going off... one is to let the alarm mainspring unwind and the other is to pull the alarm crown out and "hack" the alarm mechanism. 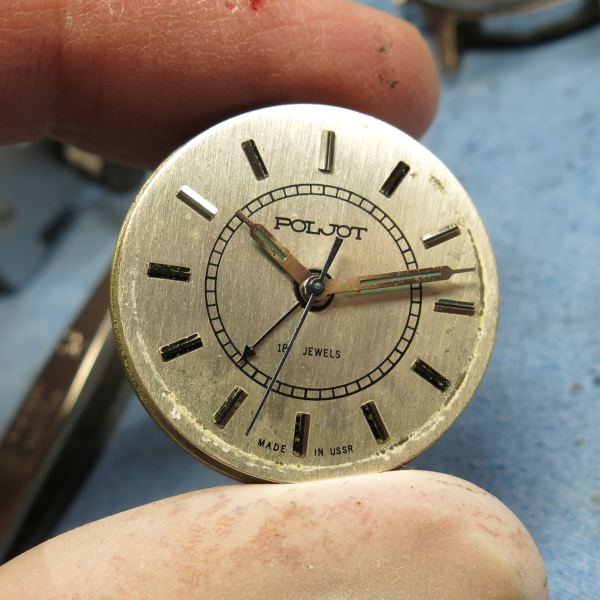 About a third of the back is used by the alarm power train.  My tweezers are pointing to the hammer that rapidly swings back and forth when the alarm is activated.  My first task will be to make sure both mainsprings are relieved so there's no power left in either gear train. 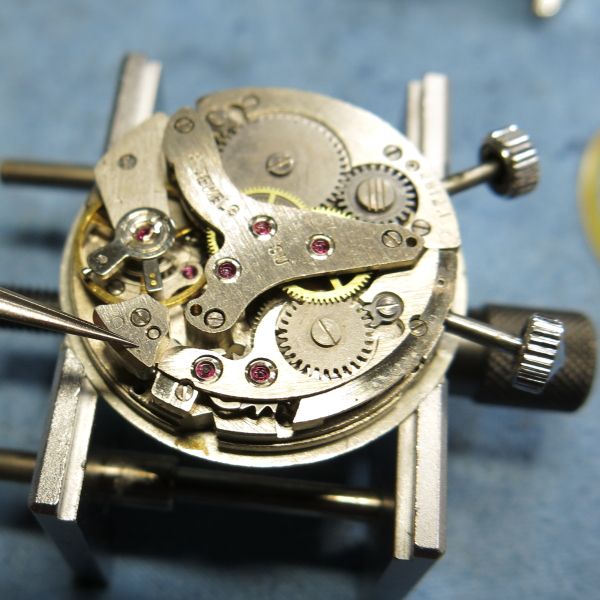 Once the hands are removed, there are two dial foot screws on the side of the movement that will release the dial. 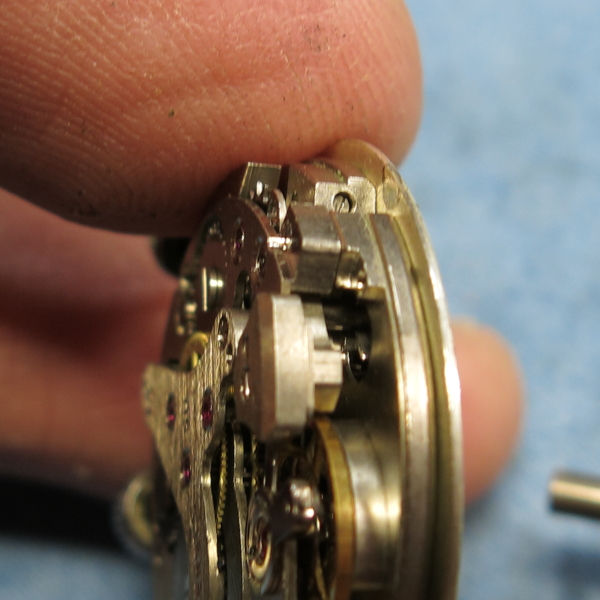 This doesn't look too complicated... ha ha!  I see four different springs under the various bridges so I will need to be very careful not to lose any of these parts. 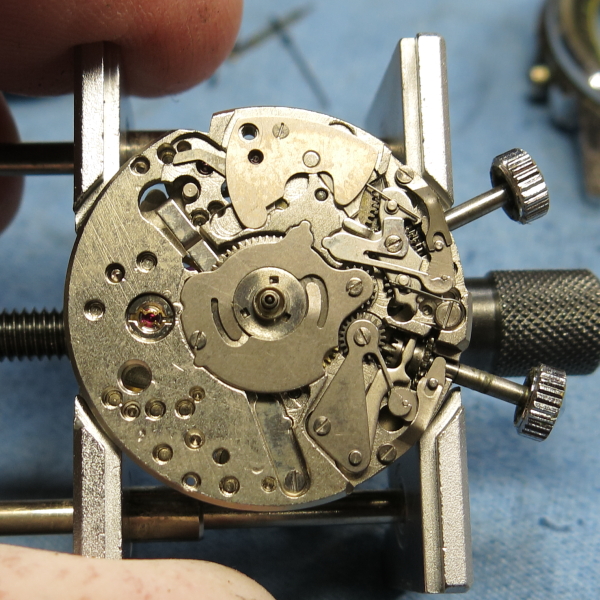 Turning my attention to the back, the first part that I will remove is the balance and the pallet fork.  That will get them safely out of the way and also make sure the power is gone from the mainspring. 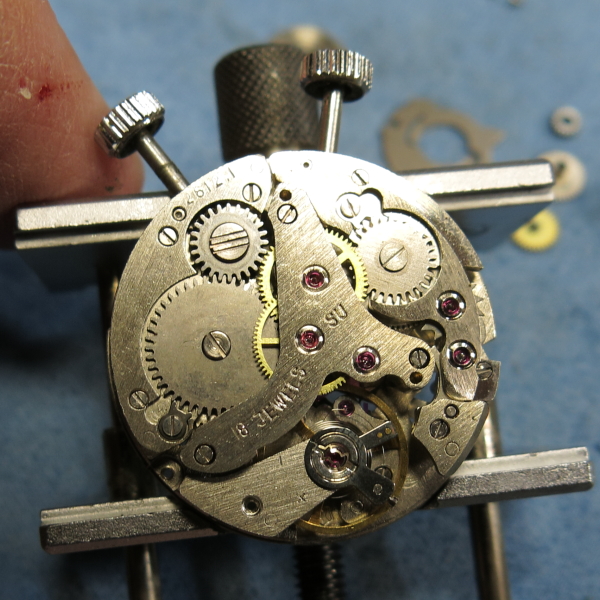 Interestingly there is a shim under the balance cock. 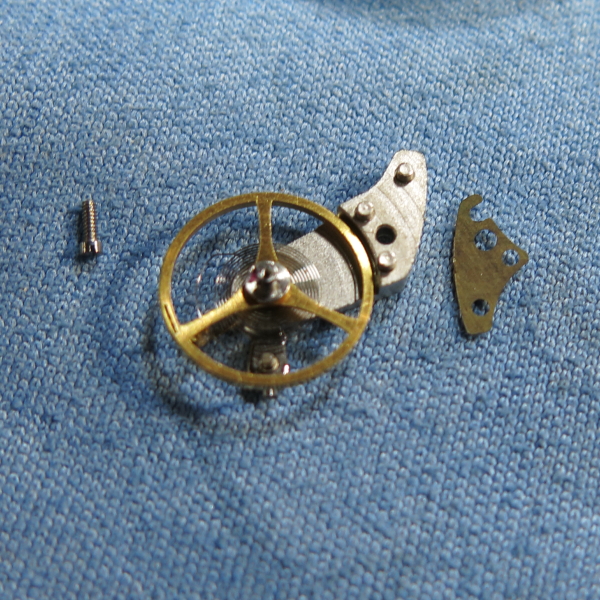 Three screws hold the train bridge in place and once they're removed the gear train is revealed. 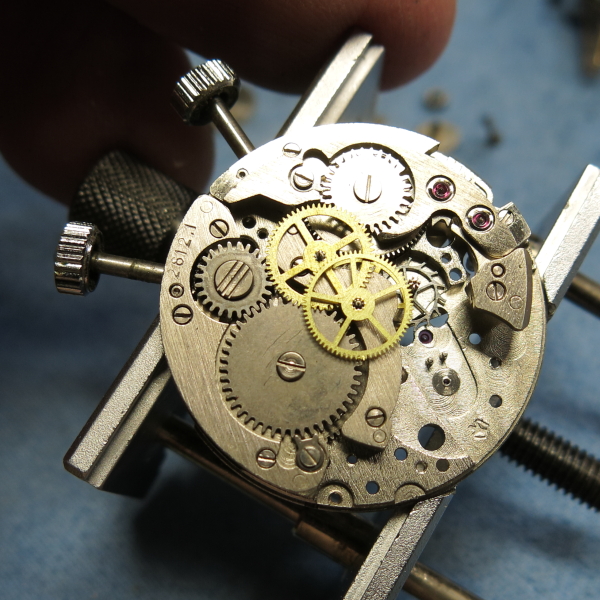 Next I'll remove the barrel bridge so I can get the mainspring barrel out. 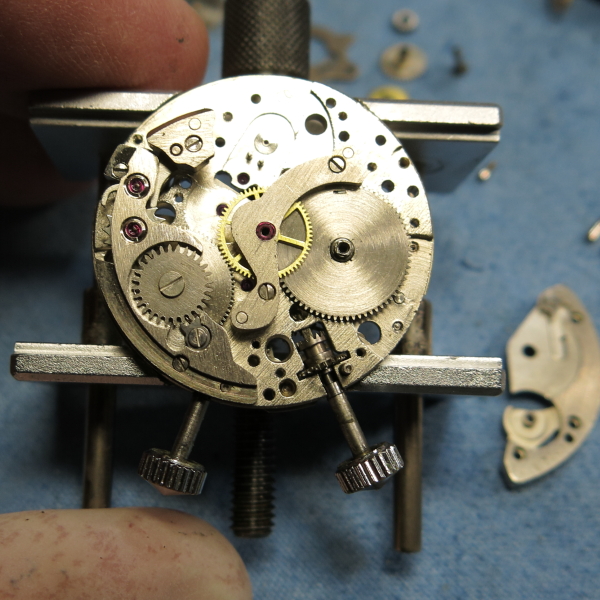 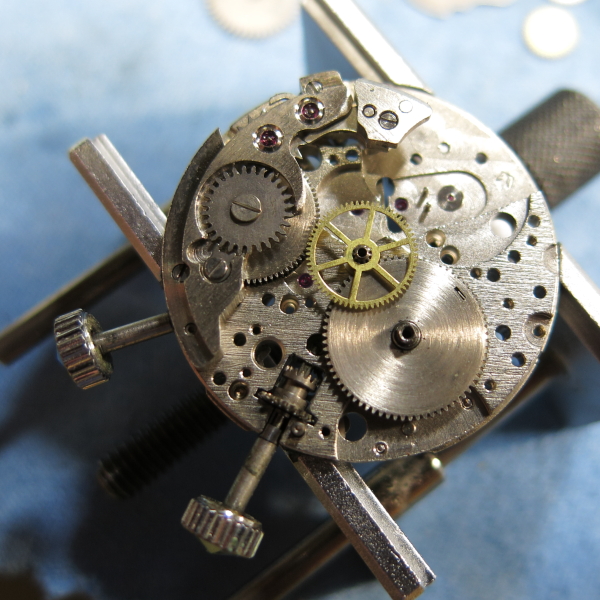 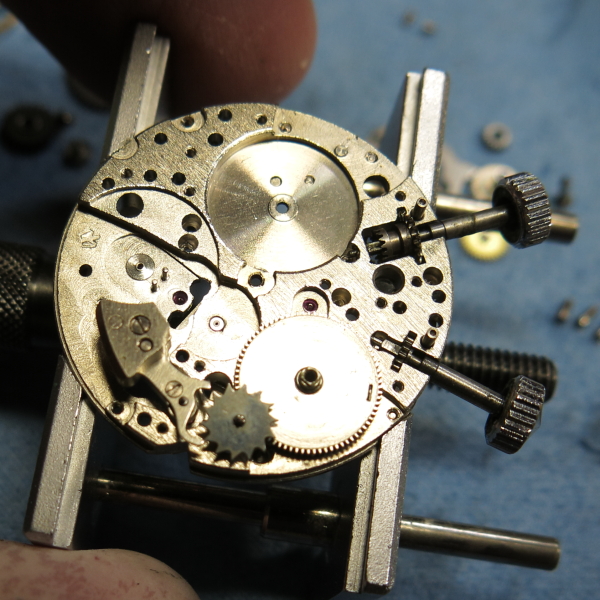 Everything gets thoroughly cleaned and dried.  I think I still have all the parts - so that's helpful too. 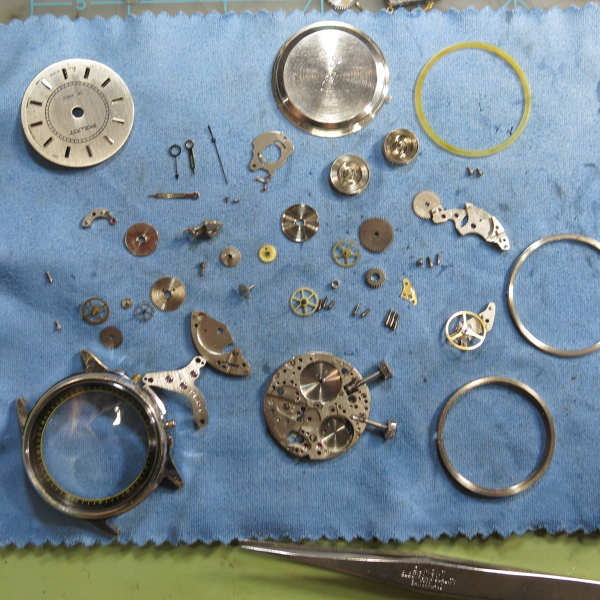 Putting it back together occurs in a few phases.  First I'll get the movement running again.  Looks like its running now - off to the timer. 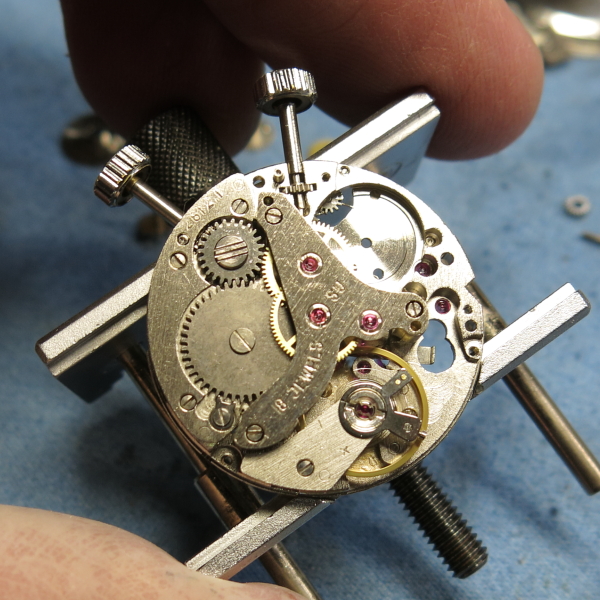 Not too shabby... I will tweak it again later. 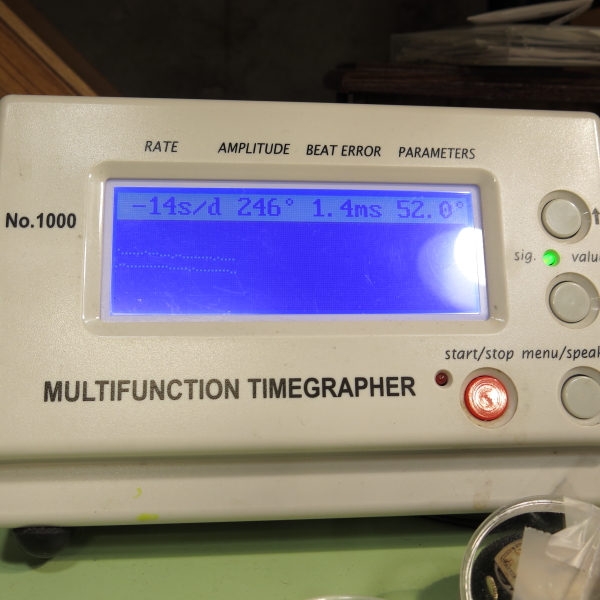 Apparently I forgot to take a photo of the alarm train being reassembled but it's not that difficult.   After that I flipped the movement dial side-up so I could reassemble all the other bits and pieces.  Everything is now lubricated and ready for the dial to go back on. 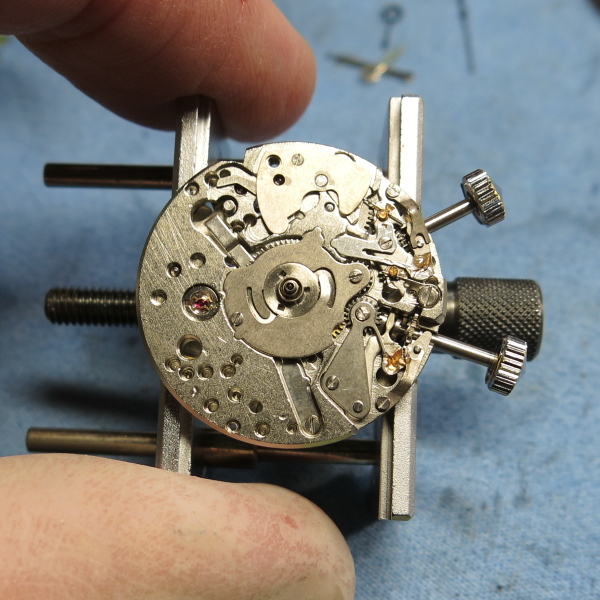 I've never reassembled an alarm before so I wasn't really sure how to put the hands back on.  I figured I'd set the alarm hand to midnight and then set the time forward until the alarm goes off.  Then I'd know it's midnight and the alarm works. 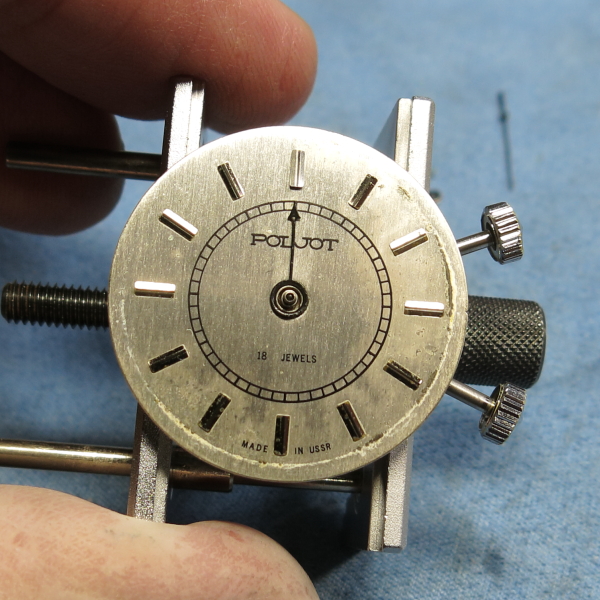 Success!  The watch works just as it should.  The crystal on the watch is acrylic and thoroughly crazed so it will need to be replaced but I'm excited to have successfully fixed the worse of the two project watches that my friend entrusted to me.  Hopefully the second one will go even more smoothly than this one. 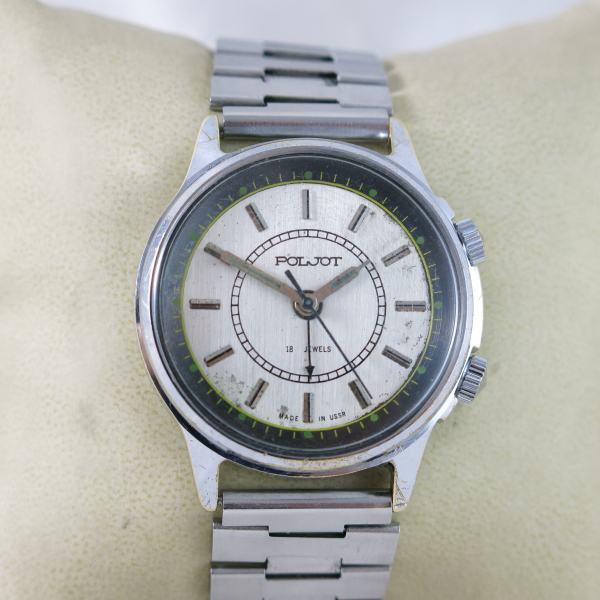