Hamilton's first automatics were introduced in 1954.  Some models continued to be made in 1955 but several early automatics were one-year wonders including the Automatic K-301, K-350, K-400, K-401, k-K-450, K-502 and K-550.  That means seven of the first 12 Automatic models were only produced for a single year thus making them some of the most difficult models to find today.

One of them, the Automatic K-450 recently made its way back home to Pennsylvania for some homemake pumpkin pie, traveling all the way from Hawaii. 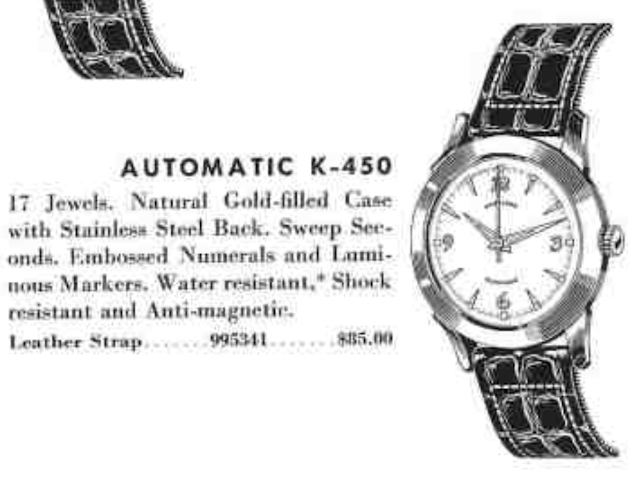 The K-450 was the first Hamilton automatic to have a gold filled bezel with a stainless steel back.  The movement inside is likely the 17 jewel 658 movement that was used in the earliest K-series models before the 661 workhorse was introduced.  Although I don't know exactly when the 661 was introduced.

My K-450 project watch is a bit worn with a very scratched crystal but looks promising.   It's making a loud clunking sound inside so I suspect the rotor inside has come loose. 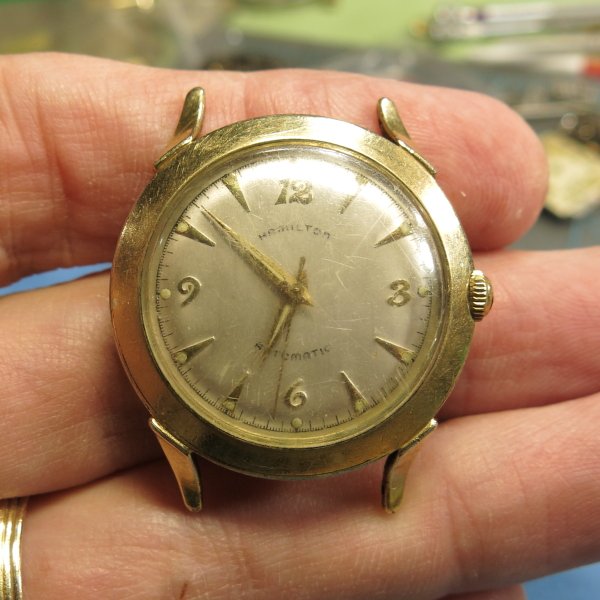 The stainless steel back is a sturdy design and should be easy to unscrew off. 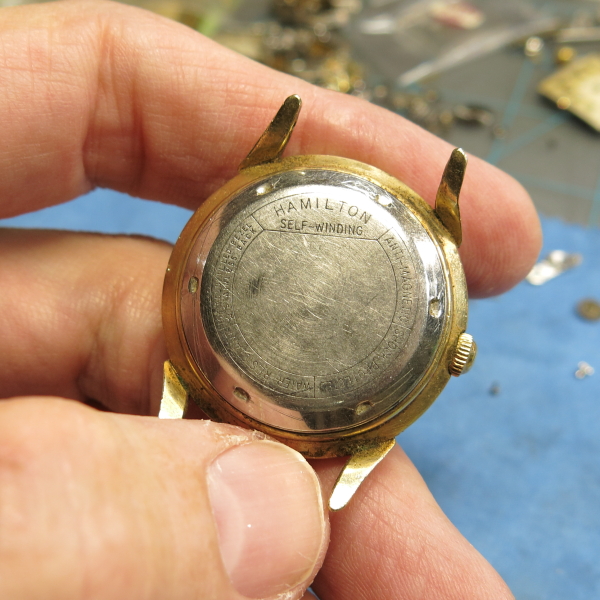 Sure enough, the rotor has come loose.  The 658 is identical to the 661 except for the oscillating weight design.  The weight rotates on an axle.  On the 658 the weight is secured to the axle with a screw that goes over a post.  You can see below that the post is broken off so there's nothing to secure the rotor to the framework.  This movement isn't very common so I can either leave rotor off, making this just a manual-winding watch, or I can replace the broken parts with parts from a 661 and use a 661 rotor. 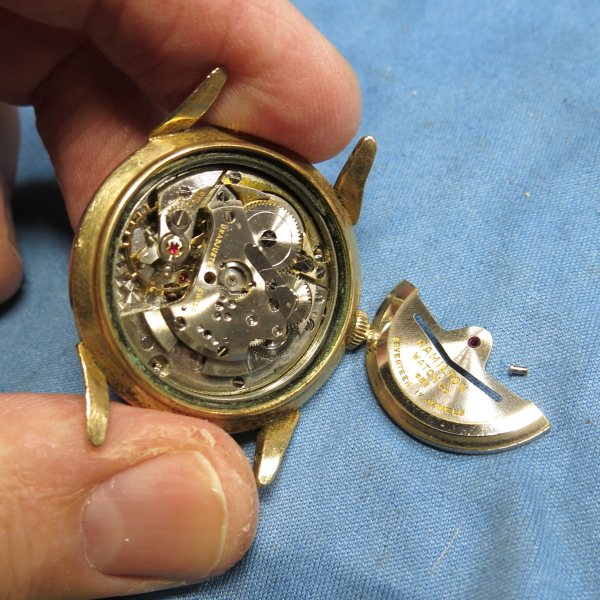 The hole in the jewel in the rotor is larger than on the 661.  It looks to me like the post for the axle is still stuck in the axle.  So I will either need to find a new axle or replace the whole assembly. 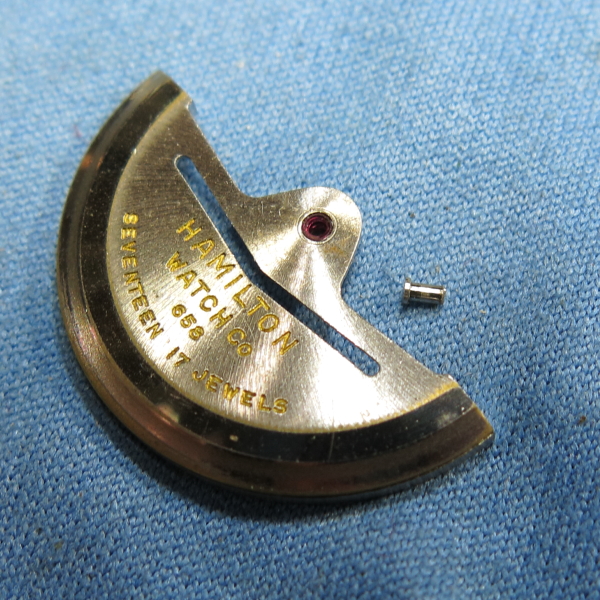 Based on the appearance of the movement, it's been a while since this watch has seen a watchmaker.  At this point this movement looks exactly like a 661 without the oscillating weight. 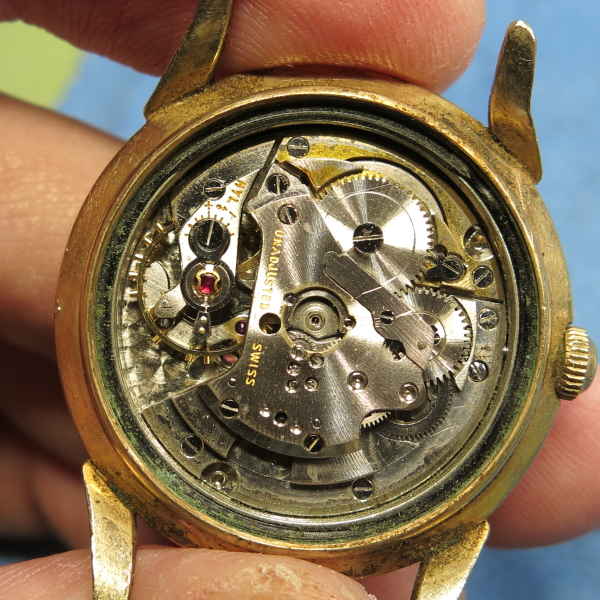 The inside of the case back makes identifying the model easy.  The rotor must have been rattling around inside for a while, as you can see the back shows a lot of rub marks. 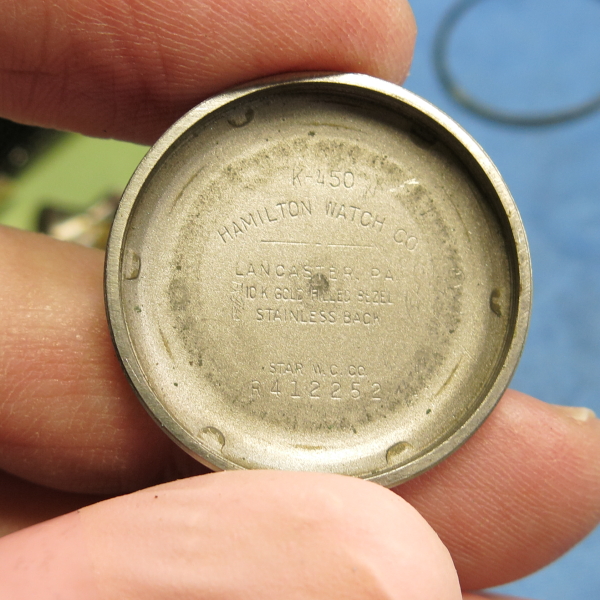 Based on the general appearance of the dial and the numbers scratched onto the back, this dial was refinished at some point.  It still looks good though. 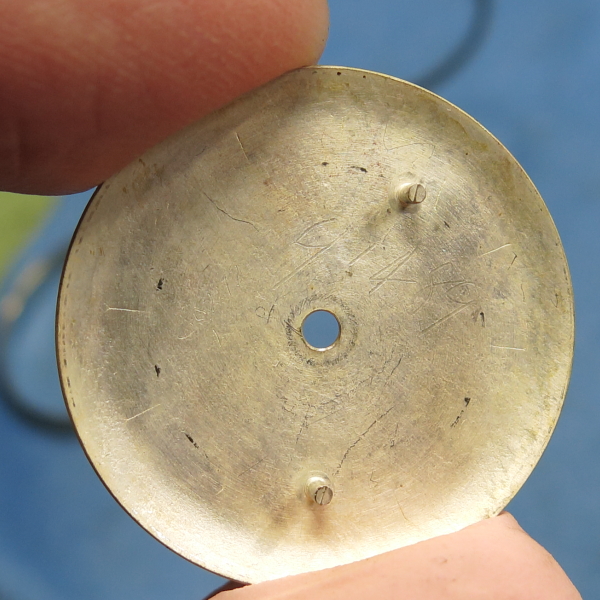 Looking closely at the bushings in the framework, one of the holes has been worn into an oval, so I will replace this framework with better one from a 661. 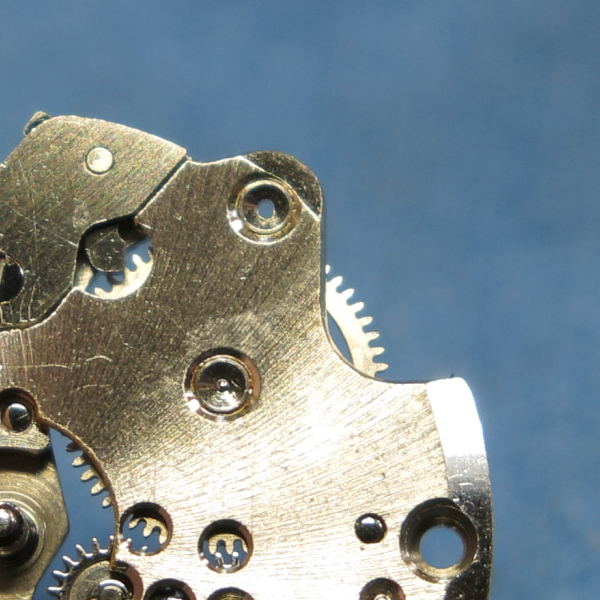 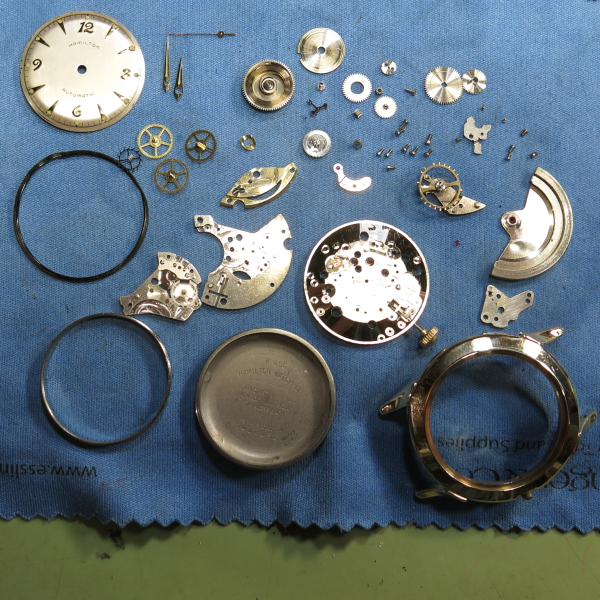 The movement is now running with a nice motion.  The barrel bride has lost some of its nickel plating and has a slight yellow color. 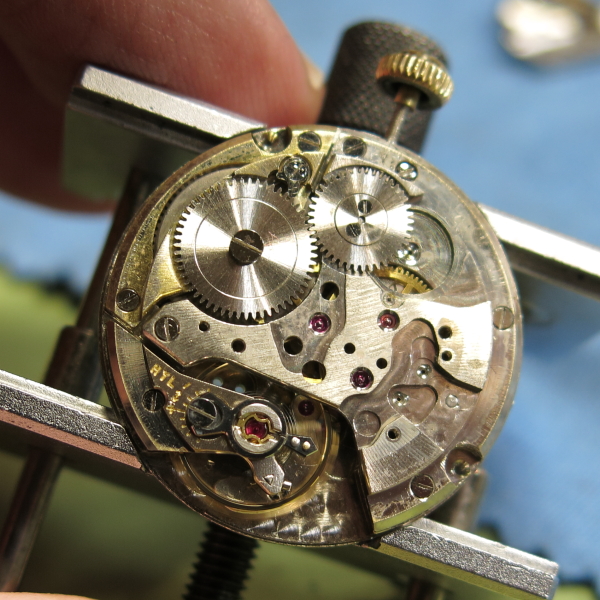 The watch is running a little slow but the other specs look good. 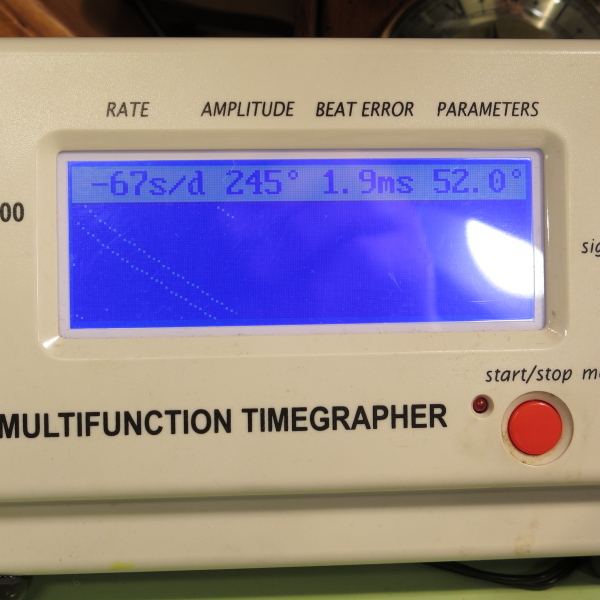 A very slight tweak to the regulator fork speeds the watch up nicely.  9 seconds fast per day is a good stopping point. 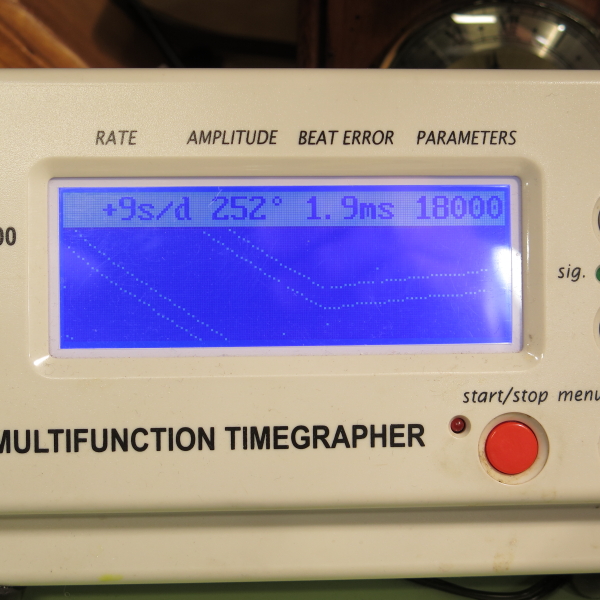 This watch definitely needs a new crystal.  A 28.3mm high dome crystal will do the trick. 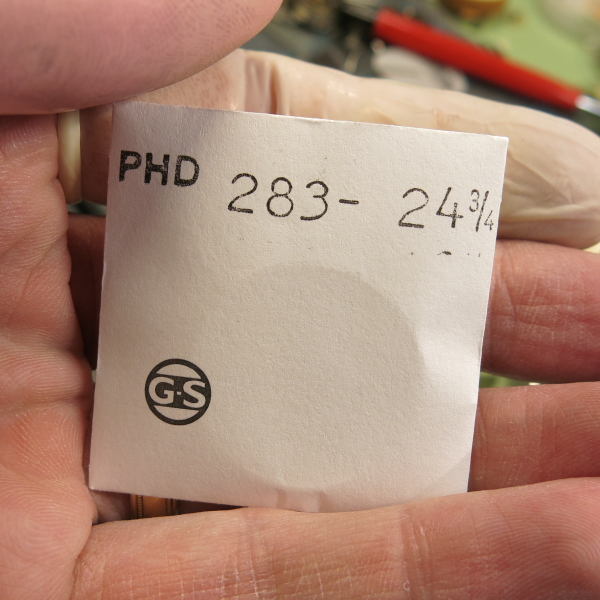 Voila - the movement is reinstalled in the case and is now effectively a 661 and fully functional as an automatic. 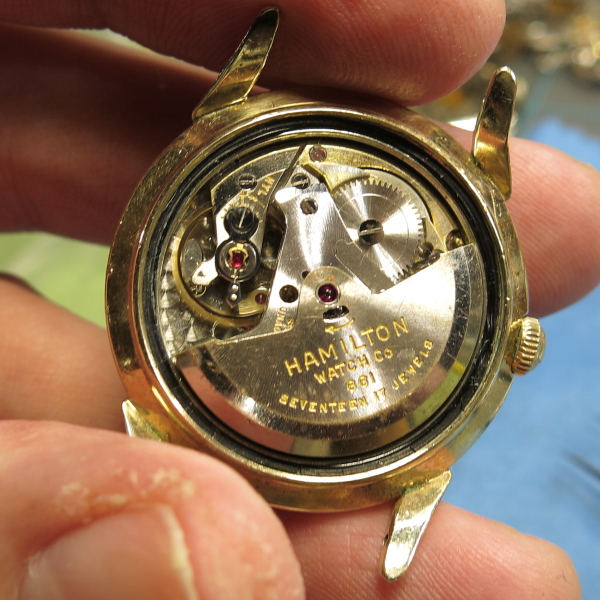 This watch turned out great.  Considering I've never seen a K-450 until now I can honestly say this is the nicest K-450 I've ever seen.  What do you think? 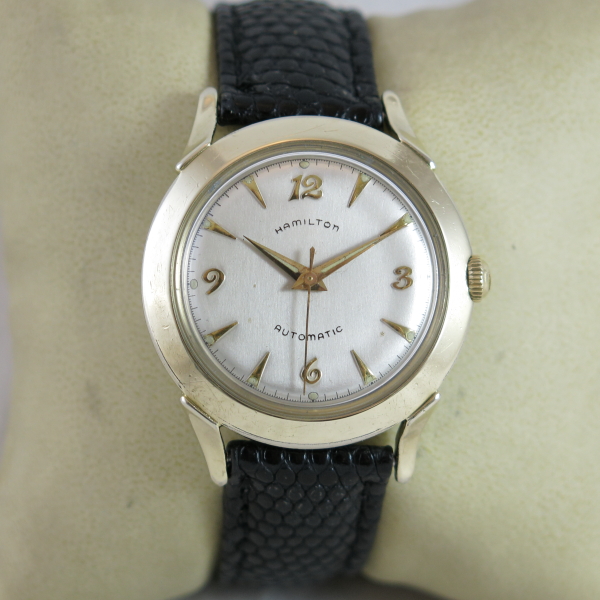