I think it's interesting how some model names where reused for different models and other times there was a roman numeral addition to the name like II, III, etc.  I guess the latter could be considered a series of models such as; the Storm King models, Rotomatics, even the initial Accumatics.  Other times just the same was reused, such as the Drake, or Martin.

Still, there isn't always a rhyme or reason for the reuse and the family resemblance, if there is one, isn't very obvious. A good example is the Boatswain, Boastwain II and Boatswain III.  The latter is nothing like the initial two.  Go figure.

A very small family of watches might be defined but the two Seaman models, the 1962 Seaman and the 1966 Seaman II.  They have a very strong family resemblance and could easily be twins.  The are also both one-catalog wonders... the Seaman was only shown in the 1962 catalog and the Seaman II was only in the 1966/67 catalog. 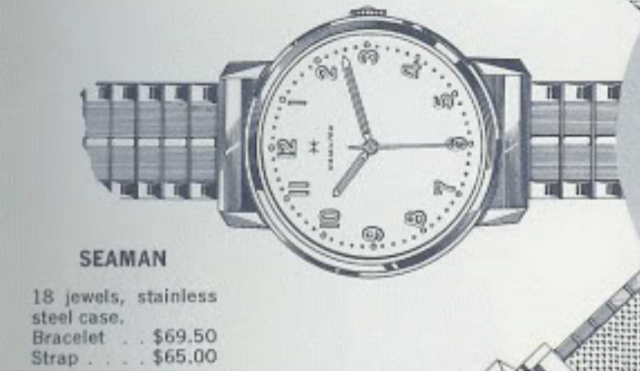 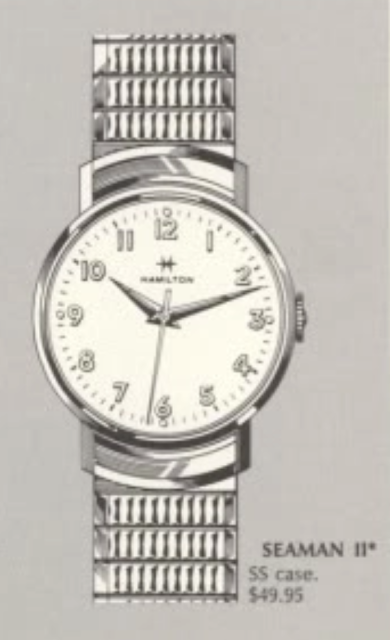 Looks like the biggest difference between the two models is the price tag - a $20 decrease between the 1962 and 1966 versions.  An astute eye might notice the Seaman appears to have a pearled minute track where the Seaman II has hash marks.  The contour of the lugs is slightly different too.  Of course, the hands are different shapes as well.

My project watch is an interesting example.  Notice it has the original Seaman-style hands.  That's not terribly unusual, as the factory was known to use whatever worked during busy times of the year like preparing for graduations or Christmas.  The crystal has a large scrape so the dark blemish on the dial is actually just the crystal. 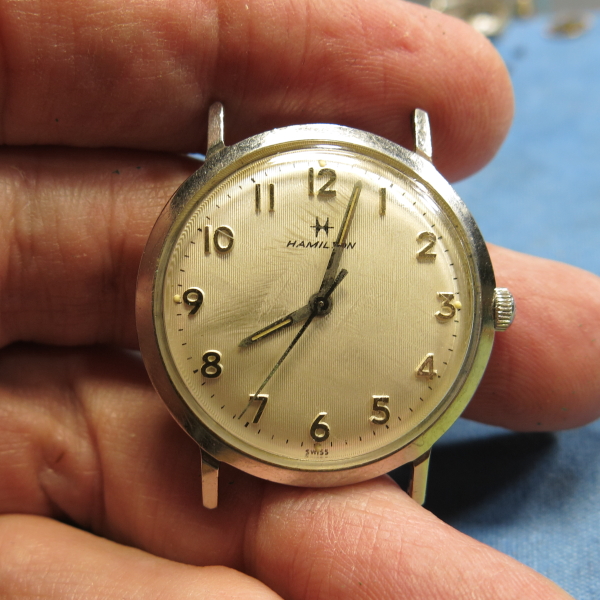 The SWISS on the dial, sweep second hand and the flat back are good indicators that there's an ETA-based movement inside like the 688.  This is a one-piece case so the movement comes out the front after the crystal is removed. 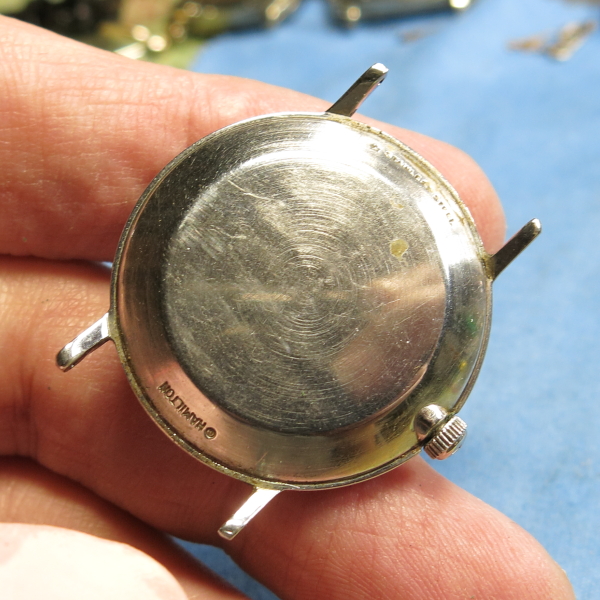 I'll use a small lever to separate the two-piece stem and pop the crown off.  Then I can remove the crystal and lift the movement out. 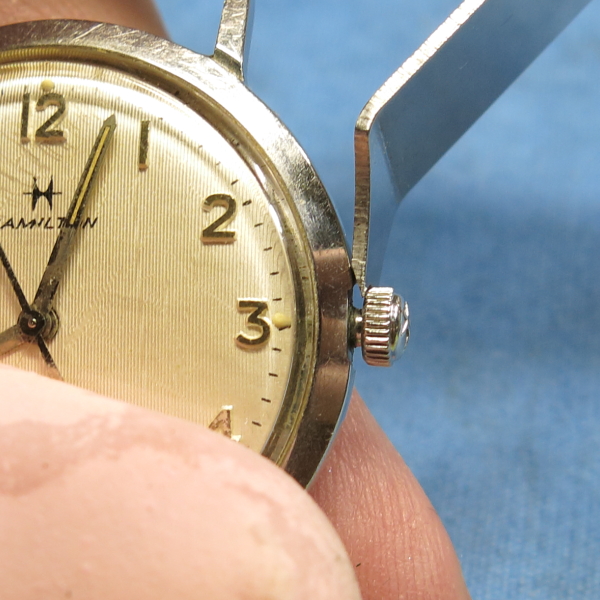 Based on the number scrapes and scratches on the crystal, I think a new crystal will be a huge improvement. 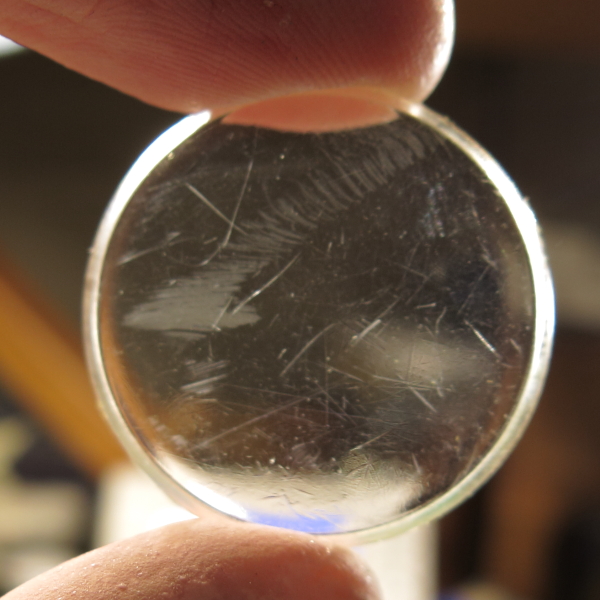 As expected, there's a 17 jewel Hamilton 688 movement inside.  It looks like it was never touched since it was initially installed. 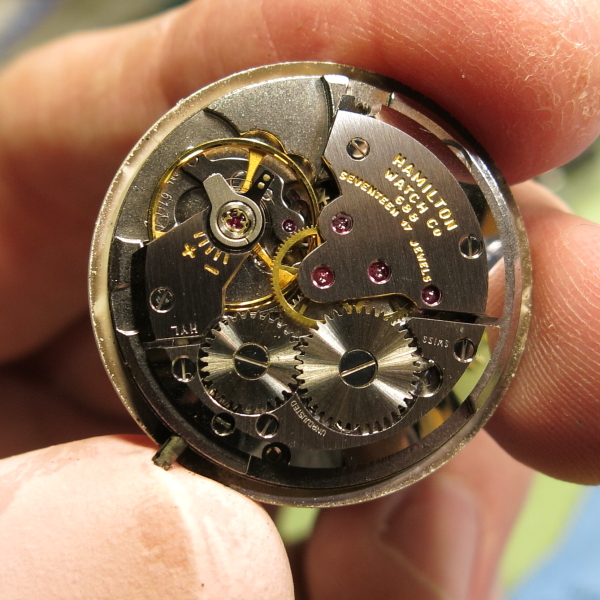 Check out this textured dial.  I doubt this dial could be refinished to look like new again, good thing this one is perfect. 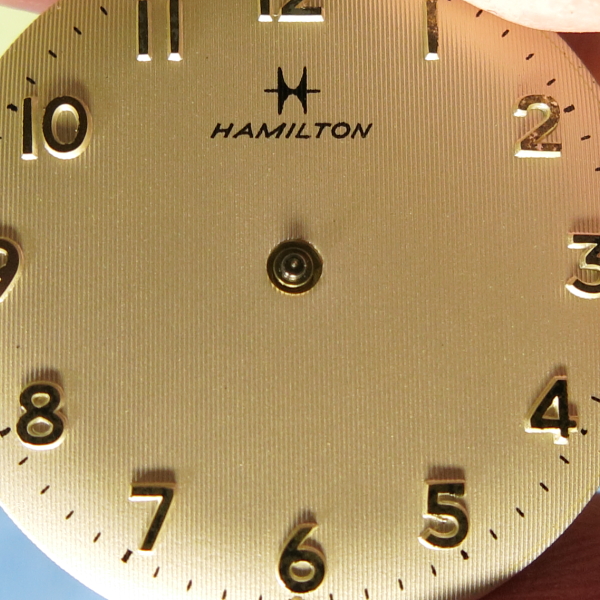 The inside of the case back shows no signs of previous services.  It's also interesting to see the model number 921565 ends with 65.  That would indicate this watch was created in 1965, probably after the 1965 catalog was released so it became a 1966 model.  The number beginning with R is the unique serial number for this watch.

A new 29.5 high dome crystal is ready to be installed. 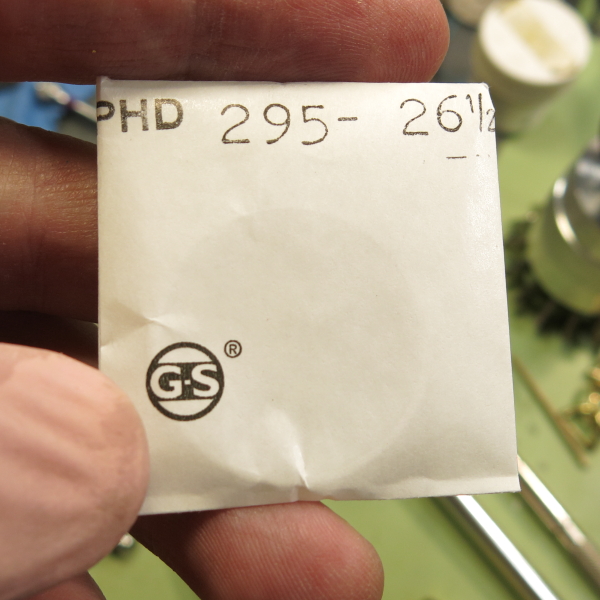 The movement is cleaned and ready to be put back together. 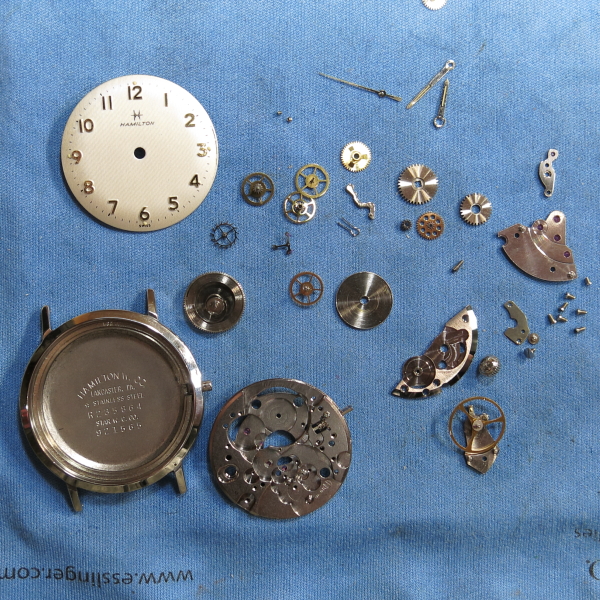 The reassembled movement is back to ticking away with good motion.  Now to see what the timer says. 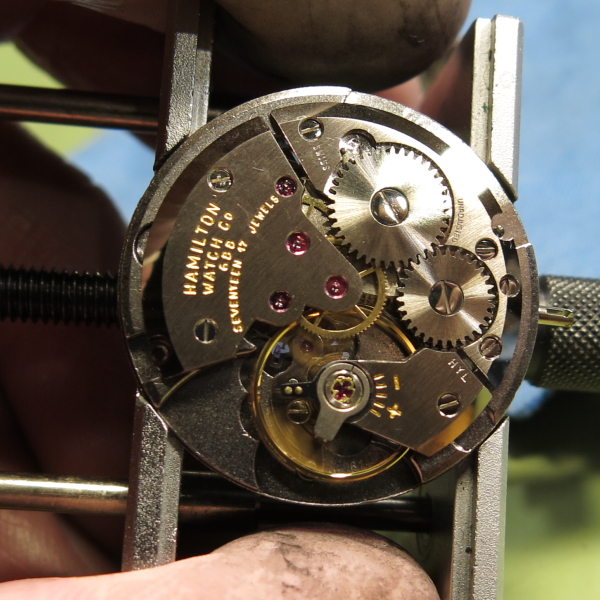 Well, running a little fast but the amplitude is low and the beat error is on the higher side. 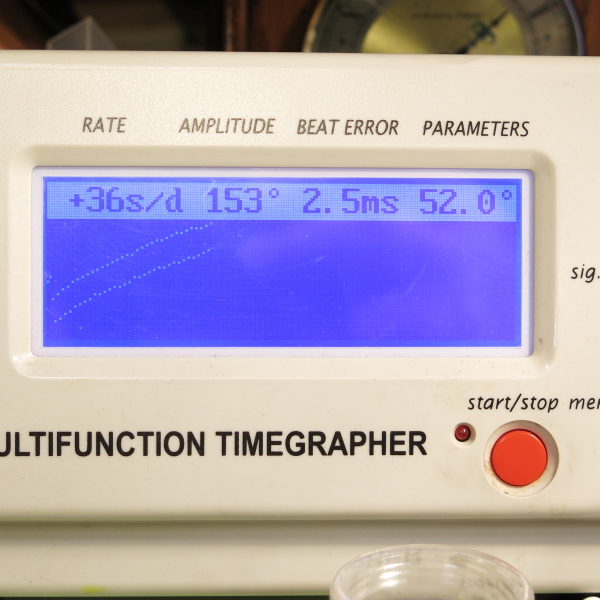 Well, I reduced the beat error and the amplitude came up but it's just barely over 200 degrees.  That wouldn't be terrible if this was a pre-1940 movement with a set mainspring but I would rather see an amplitude in the mid to high 200's. 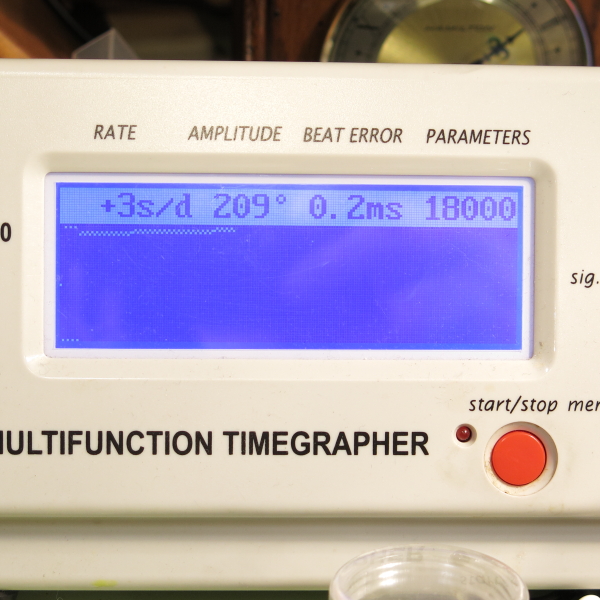 When I see moderately low amplitude I first check the barrel to make sure that it's not dragging.  Sure enough, it wasn't completely closed... it was close but not closed. 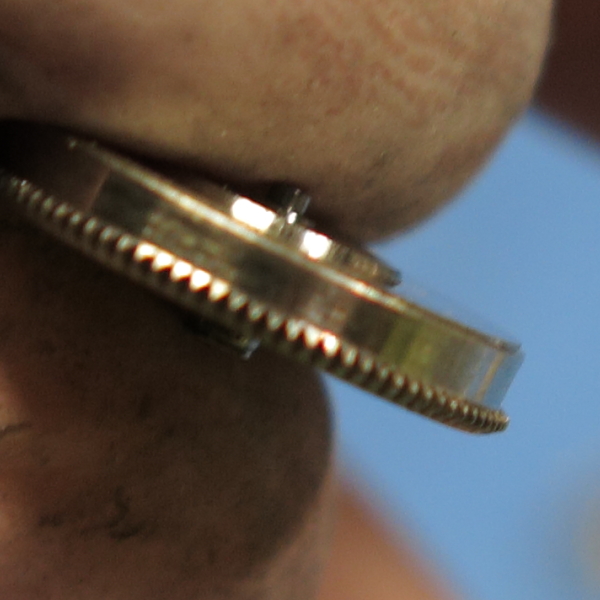 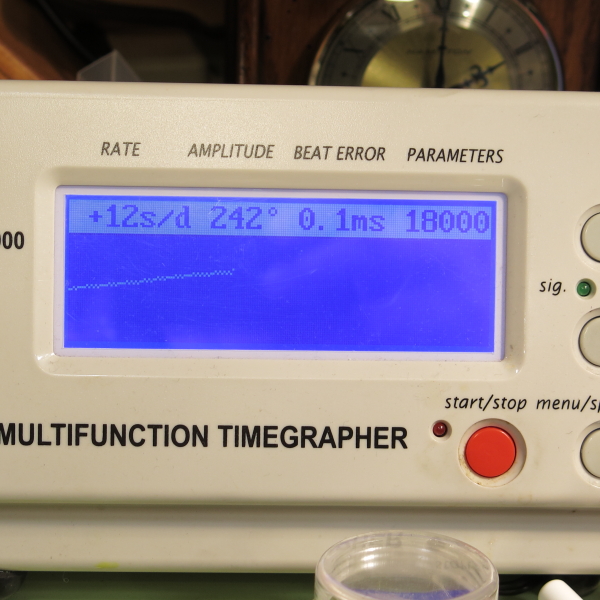 Well, this 1966 Seaman II looks and runs like it just left the showroom display case.  The only distractions to my eye are two specks of polish compound near the lugs and a piece of fiber on the lizard strap - all are easily removed. 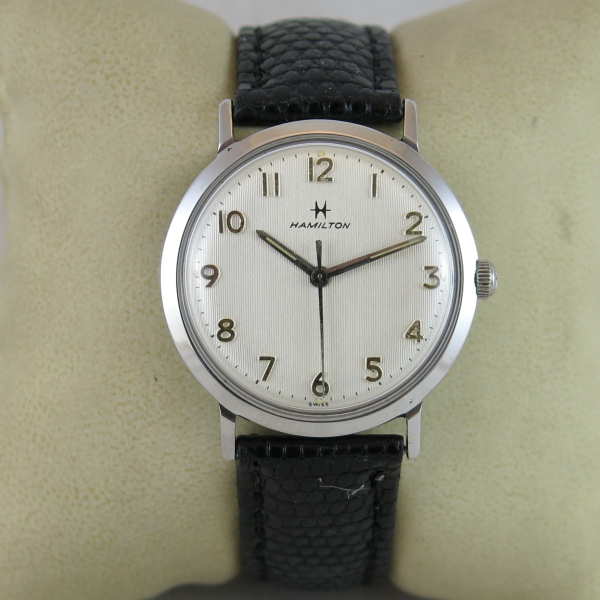