It's been a while since I had the opportunity to work on a movement that I've never seen before.  If you check out my Overhaul Examples page, you'll the large variety of calibers I've tackled but there are still a few that I have yet to come across.

I can check another one off the list though, the 19 jewel 902 pocket watch.  The 902 is a 12 size dress pocket watch and second in command after the 922 Masterpiece.  It's a very high quality movement with solid gold jewel settings and solid gold train wheels.  It was sold cased in a variety of solid gold cases - which is one reason why I haven't had one already.  However, you could choose from a variety of cases and dials. 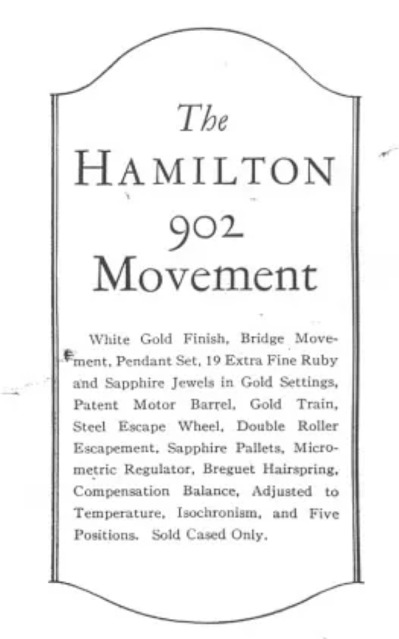 The 902 was produced for a relatively short period of time.  It was introduced in 1924 and replaced in 1930 by the 904 movement.
My project watch came in sock drawer condition - meaning it looked like it's been in a sock drawer for the last 70 years.  The crystal is broken and was held on by tape that self destructed decades ago. 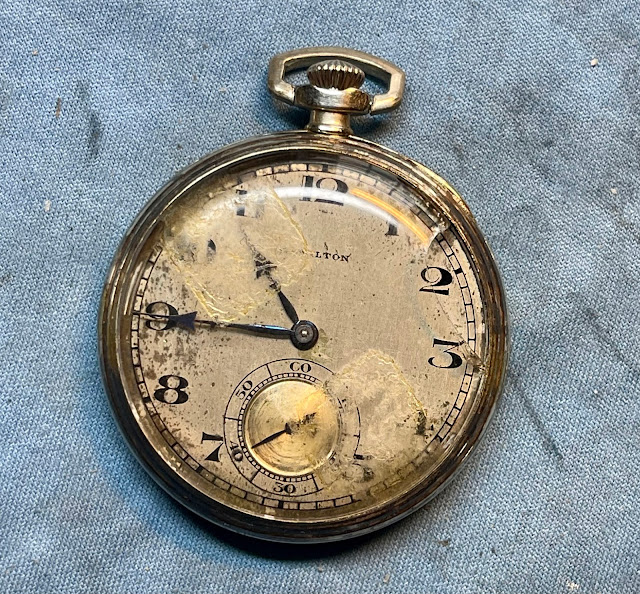 The case back is nicely engraved with initials that appear to be OEH, or is it OHE?  You never can be sure when it comes to engravings like this. 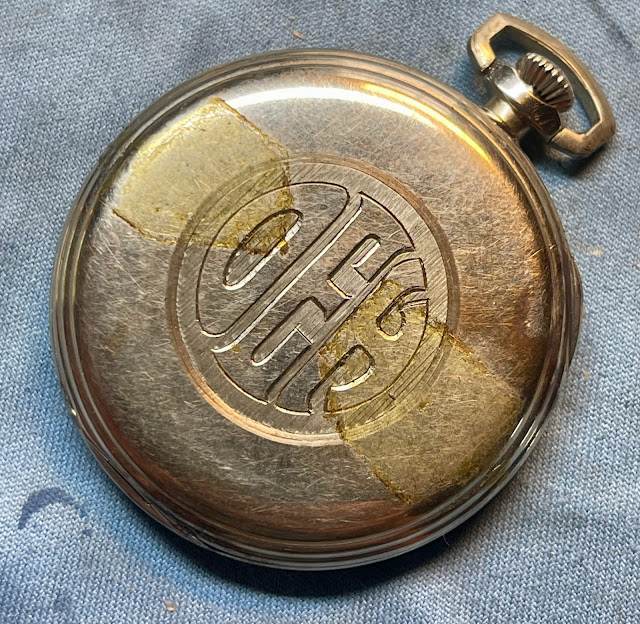 Mystery solved, this is a Sales Award for O.E. Holmberg from 1926.  What a nice-looking presentation.  I'm sure this was a prized possession. 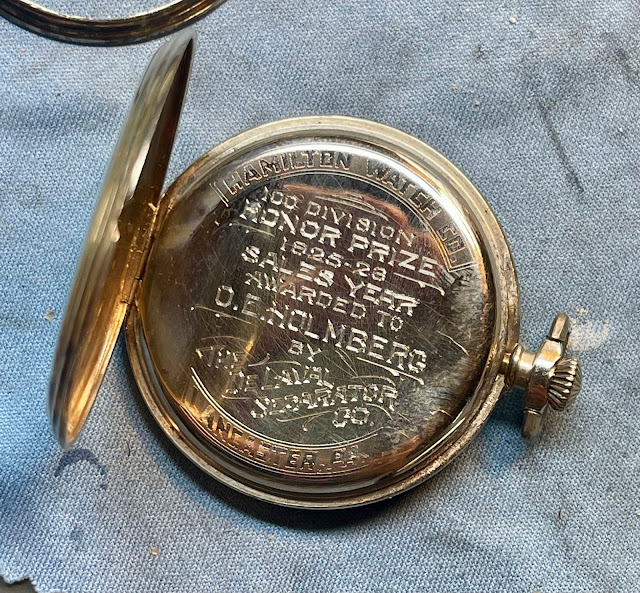 The 902 is a very attractive movement.  There's a lot of solid gold inside that will sparkle once this movement is cleaned. 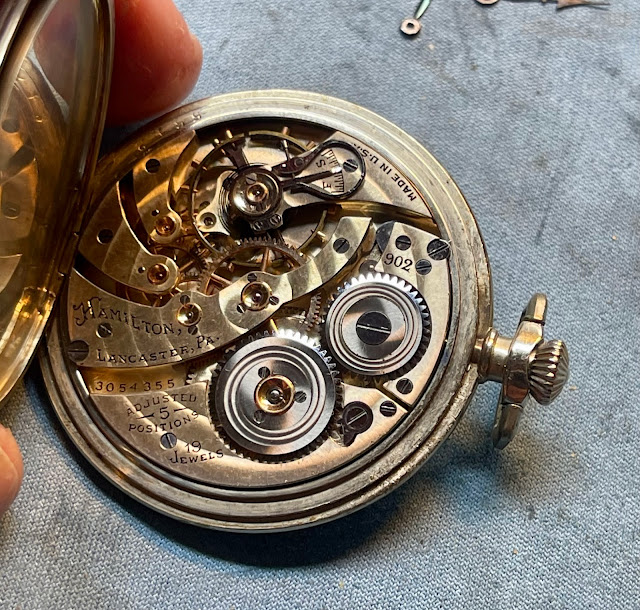 The case is clearly marked 14K.  Based on other catalog years I would venture a guess that this is a Bascine case - it's one of the few solid cases that was not engraved. 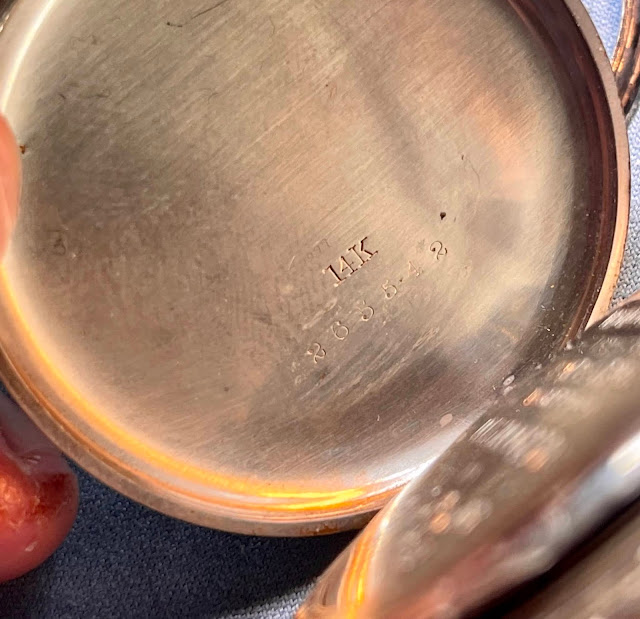 The sterling silver dial has a serious case of "dial rash".  No amount of cleaning will make this dial look better. 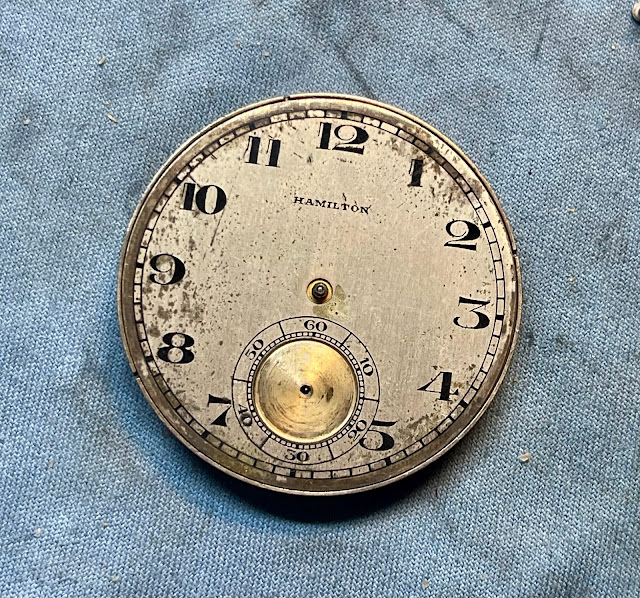 Looking at the catalog options, this dial is a No 19. 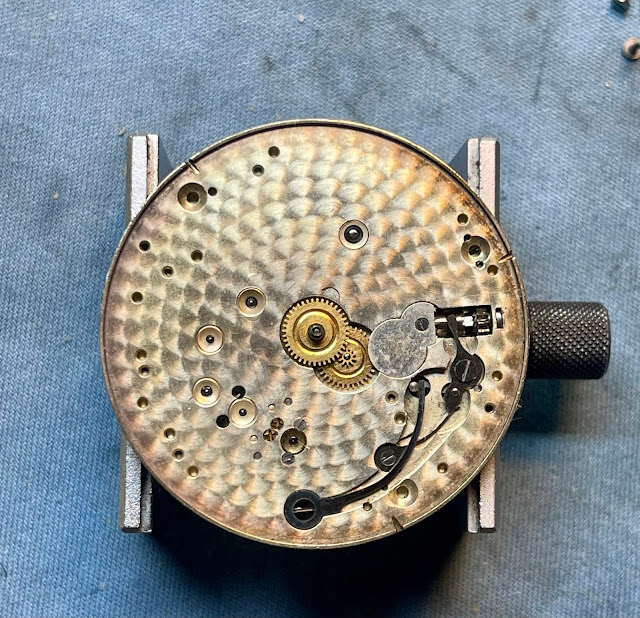 Flipping the movement over, the first thing I'll do is make sure the mainspring is released.  Then I can start taking things apart, starting with the balance assembly.  Notice the gold setting supporting the barrel arbor.  The barrel in the 902 is a motor barrel, which is a unique feature.  Jewels hold both ends of the barrel arbor and those are the two additional jewels that make this a 19 jewel movement vs the standard 17 jewels in a more basic Hamilton movement.  Hamilton didn't make movements with less than 17 jewels... at least after 1900. 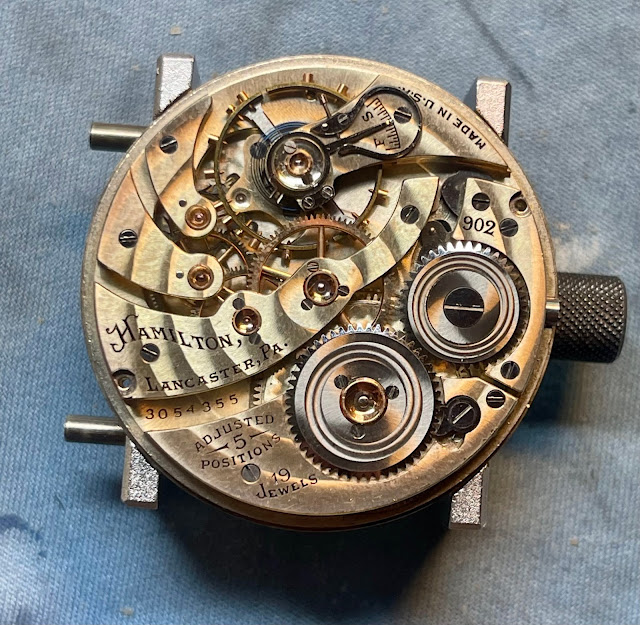 Two screws hold the hair spring stud in place and allow the balance assembly to be removed from the balance cock. 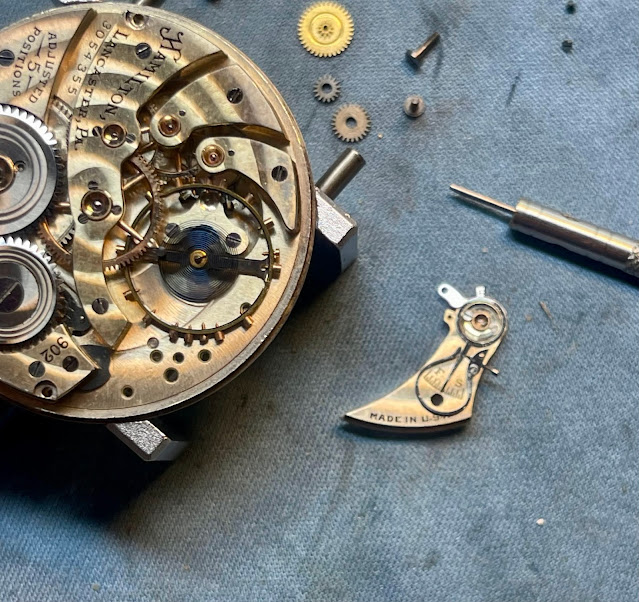 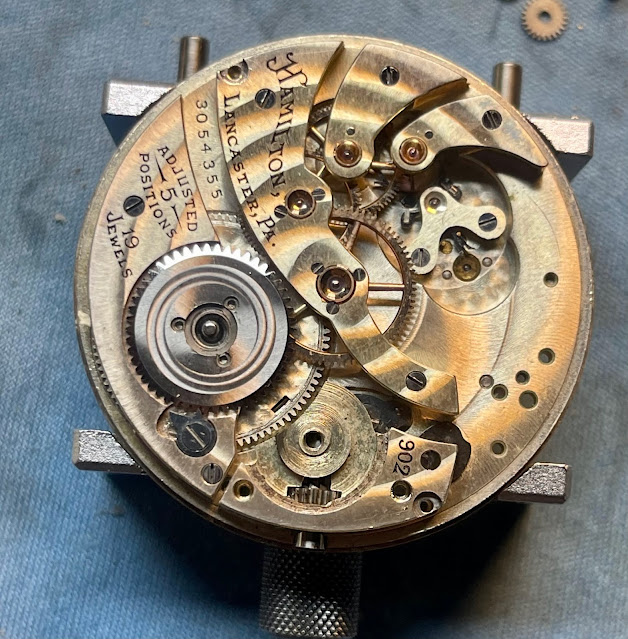 You can now see the keyless works that allow you to set the time or wind the watch.  This movement is "negative set" so the springs on the front side of the main plate move the keyless works, depending on the position of the stem in the case. 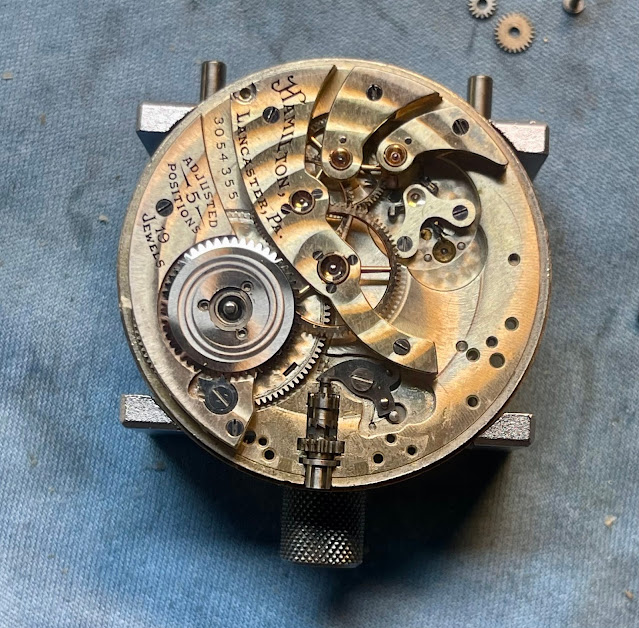 The ratchet wheel is attached to the barrel arbor and the two parts can be tricky to separate. 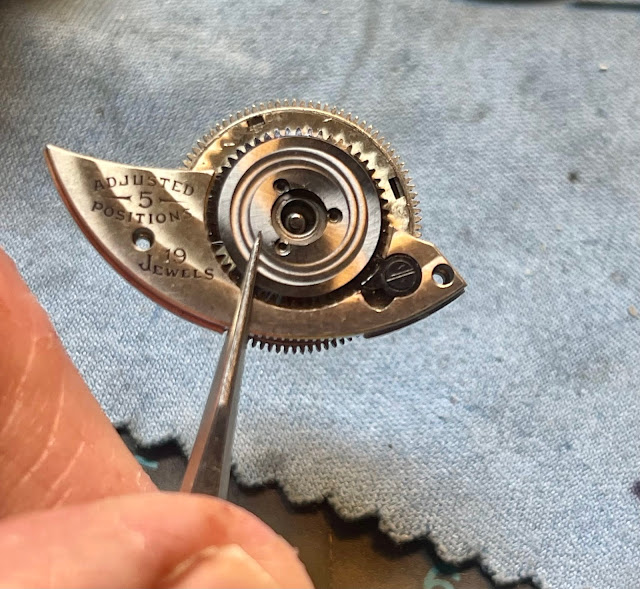 With the barrel removed you can see the arbor.  I'll try to separate the two but if I can't, the'll get cleaned together. 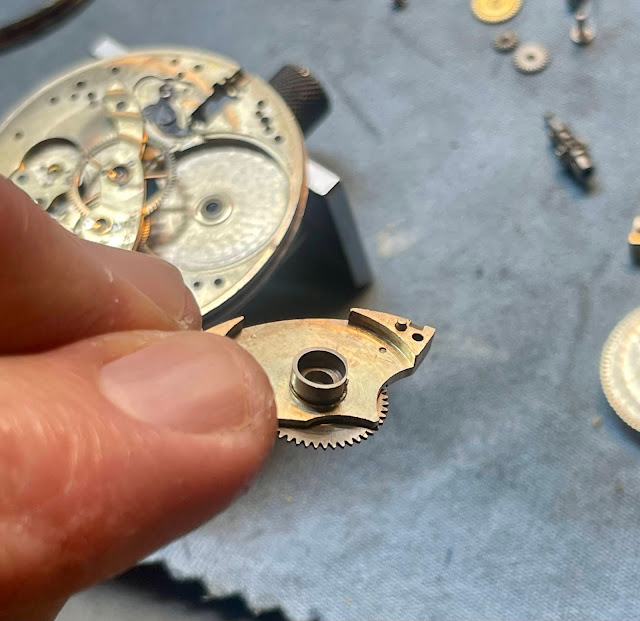 Moving on to the train wheels... the center wheel and third wheel share a bridge.  The fourth wheel and the escape wheel have individual bridges. 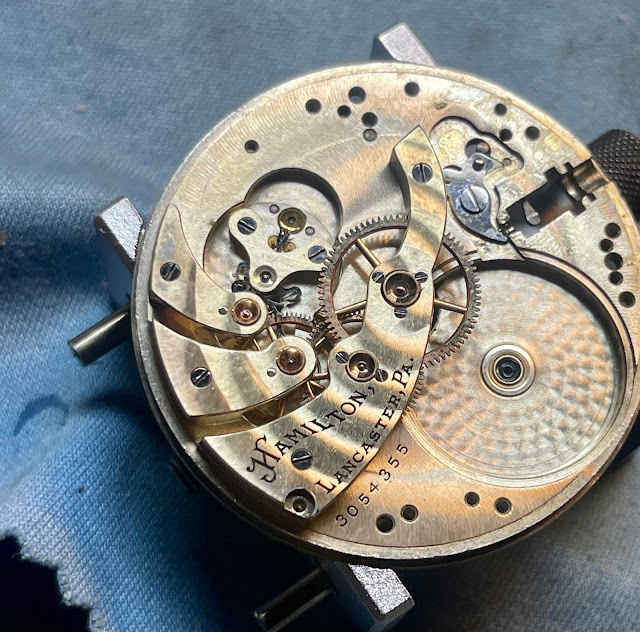 Bridge by bridge, the wheels are removed. 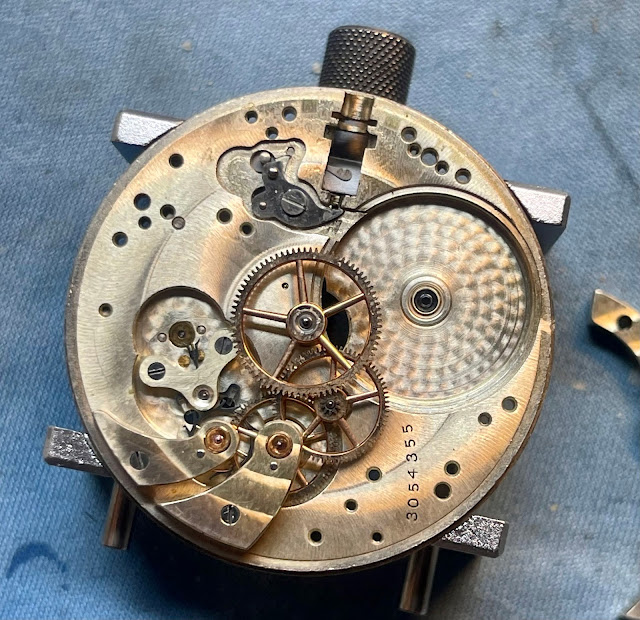 The mainspring can be pulled from the barrel to see if it has "set" into a tight coil or if it still has some life left in it. 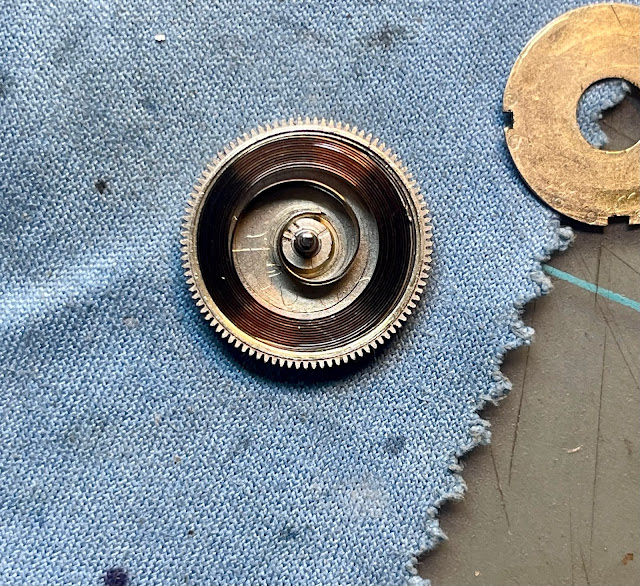 Everything is cleaned and dried.  It all sparkles much more brightly now. 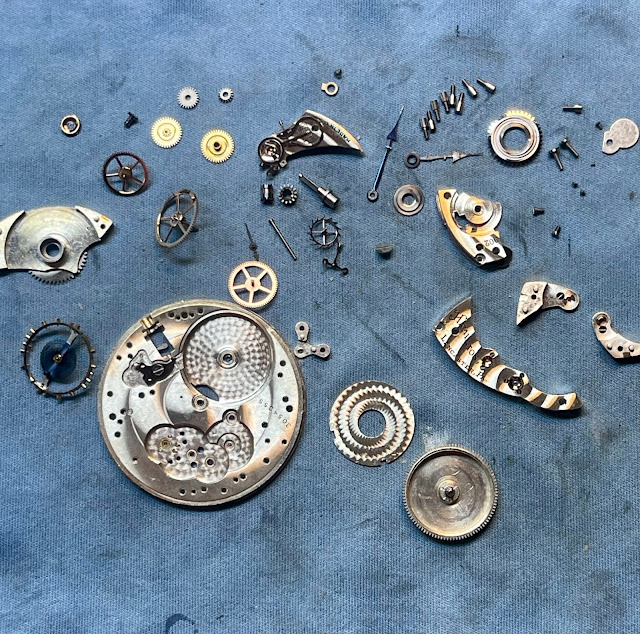 I'll put the train wheels back in place and make sure they spin freely. 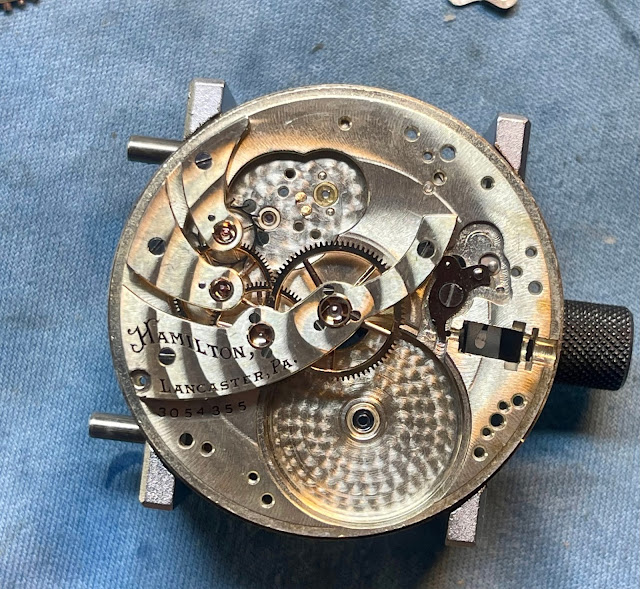 The barrel goes in place next, along with the pallet fork 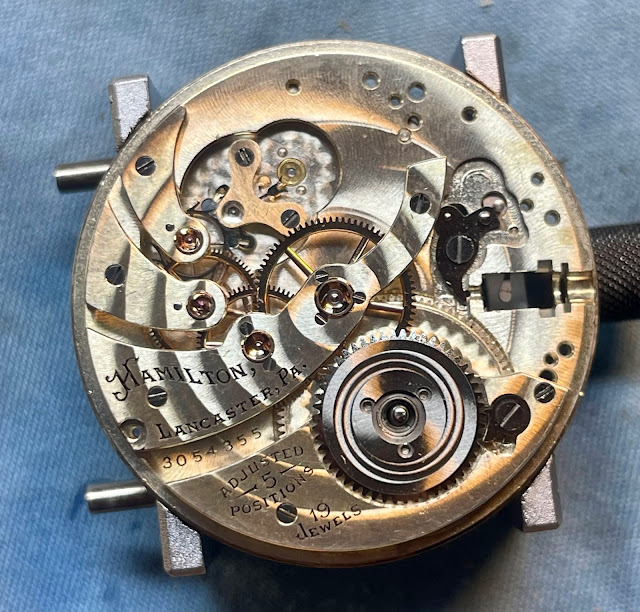 The keyless works is comprised of four parts, each gets a little lubrication before reassembly. 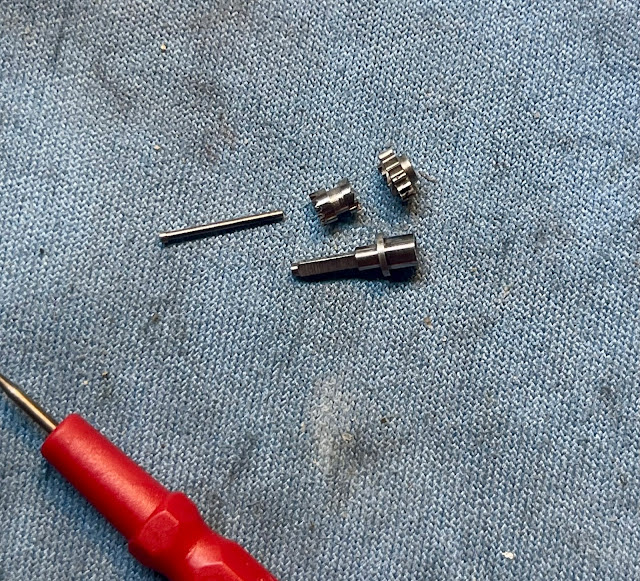 The crown wheel and bridge a back in place and now I can put the movement into the case and use the crown to wind up the mainspring. 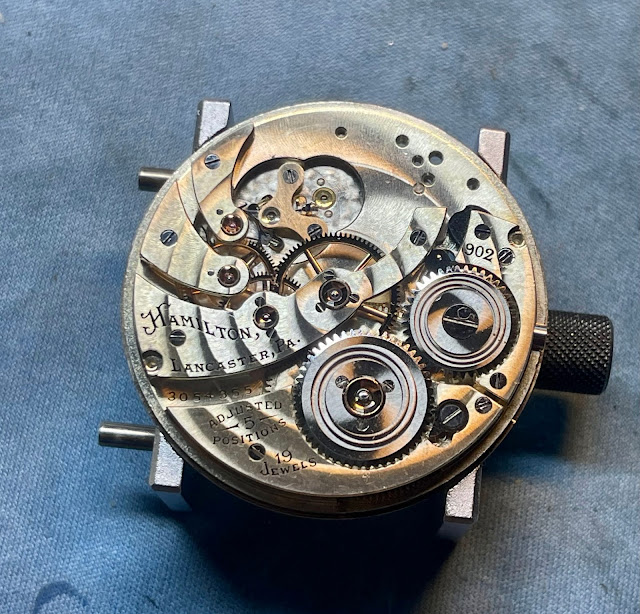 With power in the mainspring, once the balance is in the correct spot the watch will start ticking. 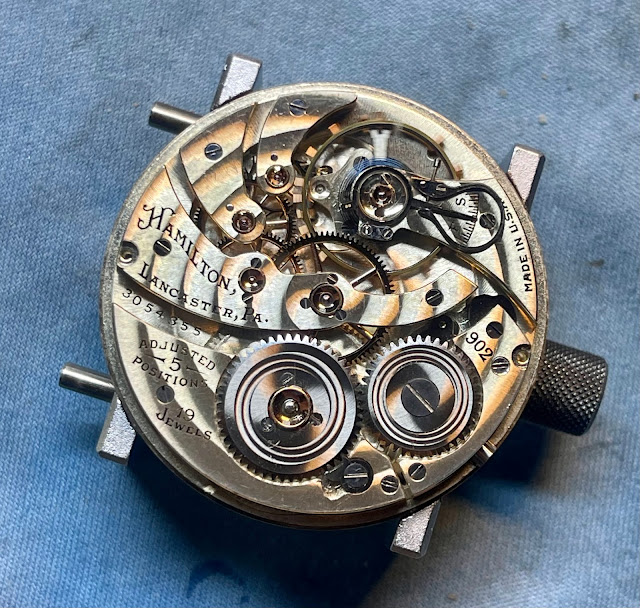 Well.... it's ticking but the beat error is a bit high at 5.1ms.  I'll have to remove the balance again and adjust the position of the hairspring on the balance staff. 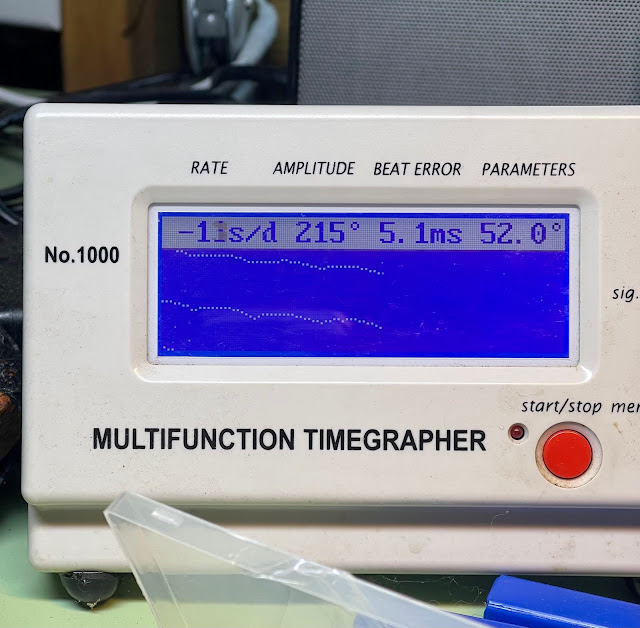 Much better beat error, now to adjust the timing a bit slower. 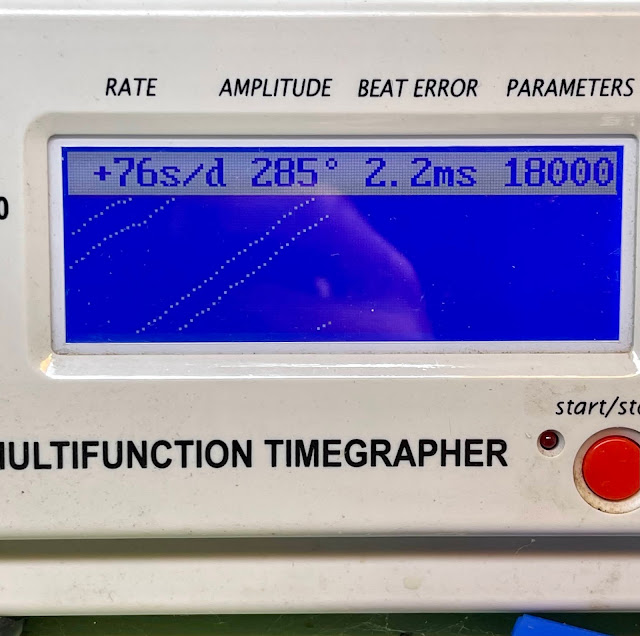 Okay - I'll leave it right here for now and let it run for a while.  It will probably settle down over time. 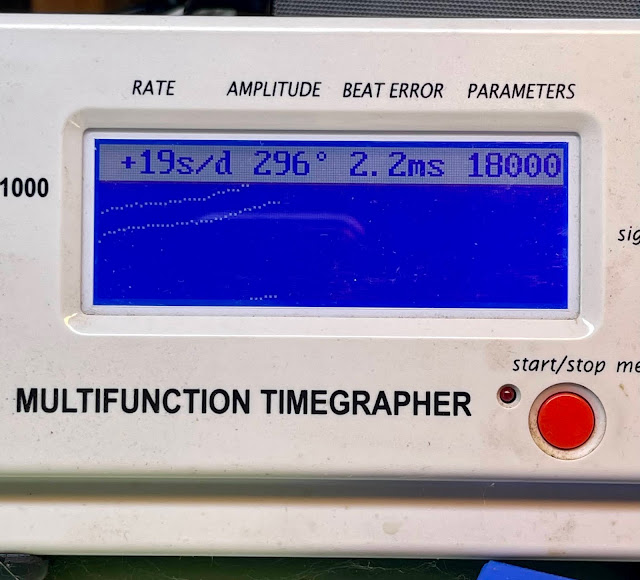 I don't know if my camera does the sparkle of this movement justice but it's definitely markedly brighter now that it's been cleaned and oiled. 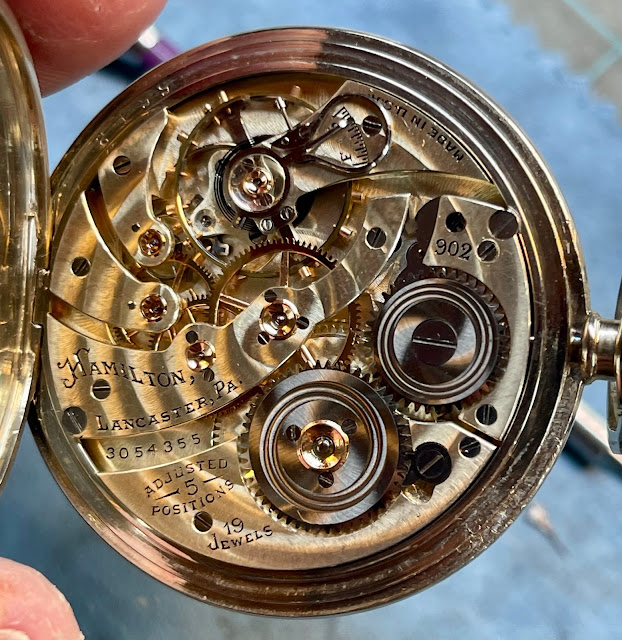 I happened to have a nice dial in my stash, courtesy of a 916 donor movement.  You can see from the catalog snip above that it's a No. 11 A dial and totally appropriate for the 902, albeit not identical to the No 19 dial. 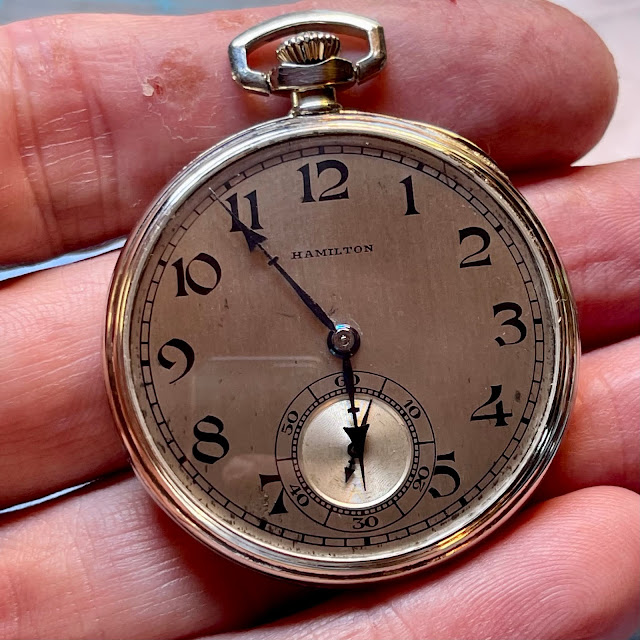 A new crystal and a light polish bring this beautiful heirloom back to showroom condition, don't you think?