2021 has finally almost come to a close.  It has been an eventful year for us - lots of change to adjust to but also a new normal has been established.  We completed our move from Pennsylvania to the "motherland" of Virginia and we're finally all settled into our new home outside Shenandoah National Park.  In fact, I unpacked the final box in my workshop this past week!

Christmas is here at last and it's wonderful to celebrate the holiday in our new home.

If you've followed my blog for a while you probably know that my favorite models are those with Christmas presentations and I have an interesting model to share with you this time.

One of my personal Christmas traditions is to watch "A Christmas Carol" at least once each Advent.  Normally I'm able to get in a few different versions before the 25th rolls around.  I think the best version is the 1951 adaptation with Alastair Sim but the 1984 version with George C Scott is a close second.

Of the four ghosts that visit Scrooge, my favorite is Jacob Marley.  To me he is the scariest.  Dickens' description of him inspires the imagination and the 1951 and 1984 versions capture his character the best, in my opinion.

I'm often asked, "How's the watch business?" and I always reply, "It's just a hobby" as I don't make my living restoring watches, nor do I think I'd really like to (it can be very frustrating).

However, Jacob Marley reminded me this year about one of things I really do enjoy about restoring watches.

If you're not an aficionado of Scrooge, let me remind you that Jacob Marley was Scrooge's long time friend and business partner.  He died on Christmas Eve and was gone seven years when he visited Scrooge on December 24th, presumably while in purgatory atoning for his sins he accumulated while alive.

Marley admonished Scrooge to change his ways while he still could, as the "chains he forged had grown to a ponderous length".  Scrooge replied. “But you were always a good man of business, Jacob," implying that surely things weren't as dire as Marley described.

As Dickens wrote, "Business! cried the Ghost, wringing its hands again. Mankind was my business; charity, mercy, forbearance, and benevolence, were, all, my business. The deals of my trade were but a drop of water in the comprehensive ocean of my business!”

It made me think, so how is the watch business?  One of reasons that I enjoy taking on other peoples' projects is that I feel I bring a little joy into the world with every watch I restore.

For example, I recently restored a 1951 Bailey for a woman after her 90+ year old father dropped his high school graduation present.  It was run over by a car and hopelessly destroyed.  He was devastated. 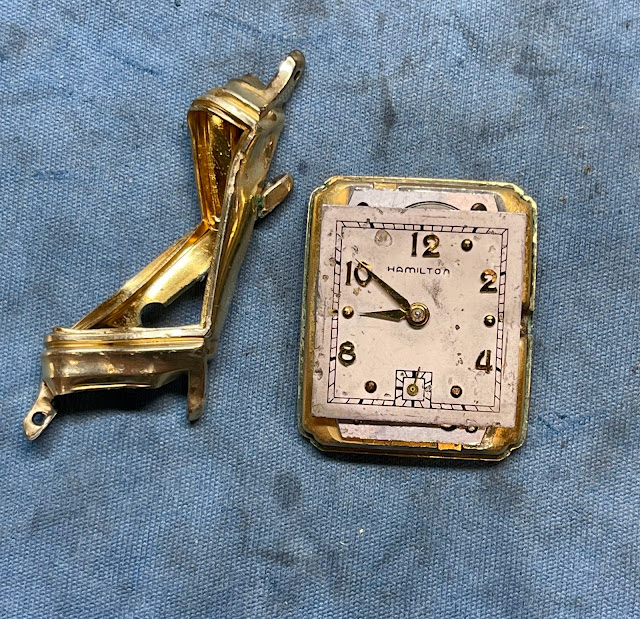 Imagine her (and his) delight when they opened the package and saw his restored watch, almost as good as new!  The original inscribed case back and movement serial numbers were the same - so the watch still aligns with it's original box and paperwork. 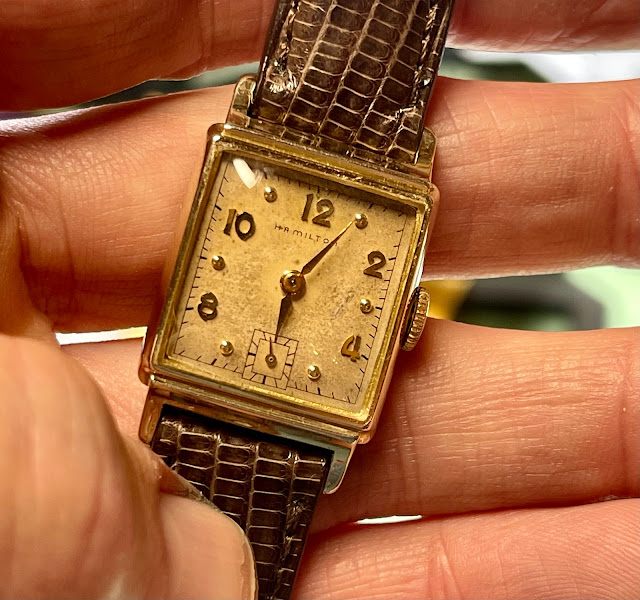 Pretty much every Hamilton watch collector that I know got their start in the hobby by inheriting a "priceless" heirloom from an ancestor, their father, or grandfather.  Every family watch that I restore brings a little joy into the world.

So my "watch business" is good.  It's very good.

The catalog image just doesn't do the actual watch justice.  The Golden Tempo "R" has a multicolored striped and textured dial.  It's cased in 10K yellow gold fill and it was paired with a matching multicolored metal bracelet!  It really makes a statement... maybe not a statement that you'd like to make but a statement nonetheless.

Tucked inside the case is a 22 jewel 770 movement - the flagship caliber in Hamilton's wristwatch lineup.

My project watch arrived via eBay and I was really excited to get it.  I've only seen two other examples of this model in the past.  It arrived in "okay" shape... the crystal was the wrong style (too tall) and the crown had obviously been replaced.  Only a purist would make those observations though. 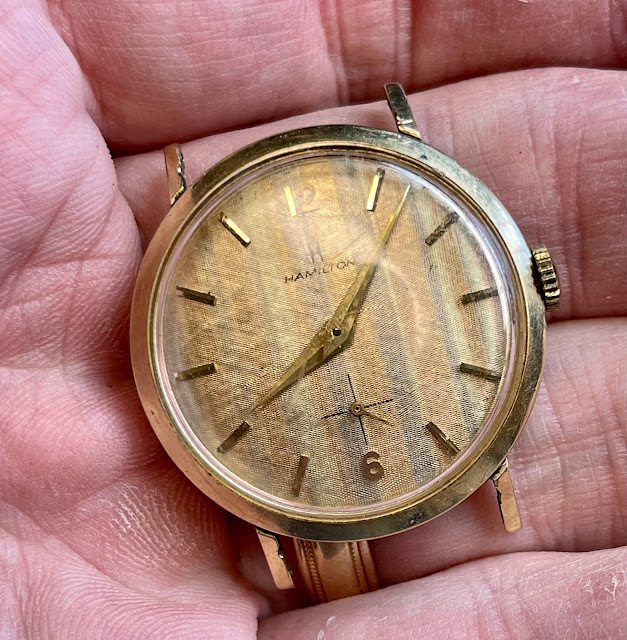 You can tell from the grooves worn into the lugs that this watch used to have the bracelet but it has been lost to time.  I don't like metal bracelets for this very reason - they tend to eat grooves into the lugs and weaken them.  However I would make an exception for the Golden Tempo "R" - the bracelet is a really interesting feature and complements the watch perfectly.
With a little effort you can see the back is engraved with its original owner's name along with Xmas 1962.  I would prefer to keep Christ in Christmas but I'm sure this watch was still a treasured gift, even if they did save the cost of 5 letters when it was engraved. 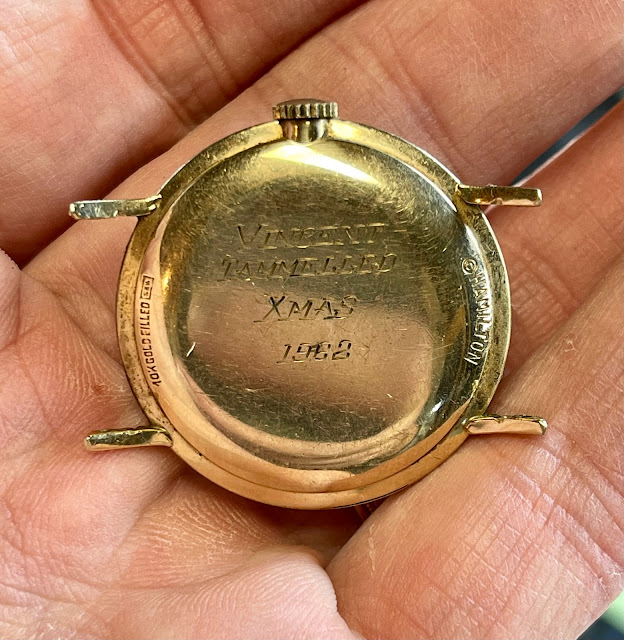 I was able to find the owner after a little internet sleuthing.  He was born in 1939, he had two older brothers also named Vincent, but they were each born still born (very sad).  Evidently Vincenzo Tammelleo and his wife, really, really wanted a son named Vincent.  He passed away in 2019.
From the side you can see the crystal is a bit tall, about the same height as the overall thickness of the case.  The generic crown is okay, but I hopefully have a better replacement. 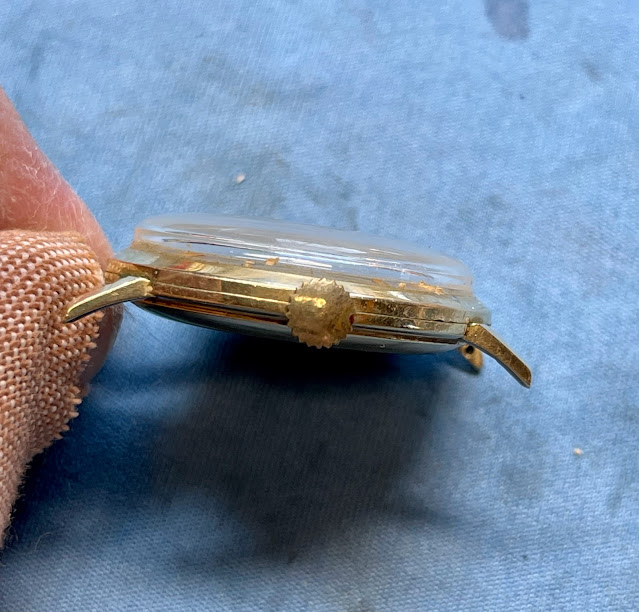 The case is a two piece design and with the crystal and bezel removed you can really see the unique striped dial and solid gold applied figures. 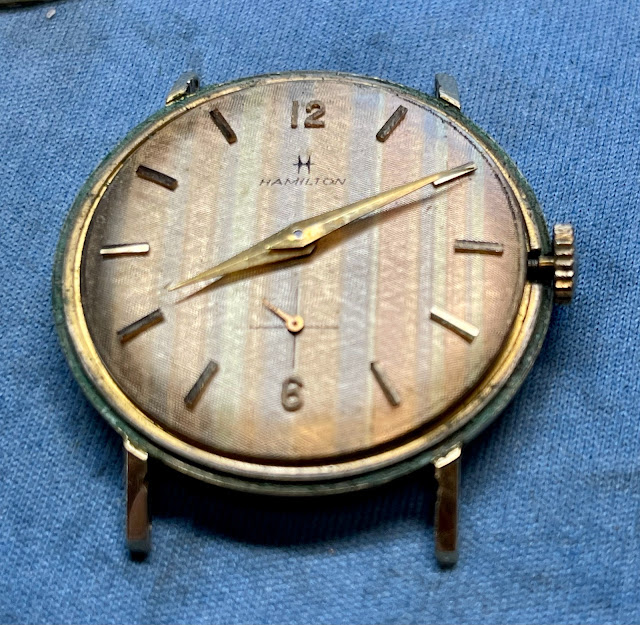 The 22 jewel 770 movement is a great design and very easy to service.  Based on the dust and dirt inside, it's been a while since this watch was last cleaned but it has at least had some attention over the years. 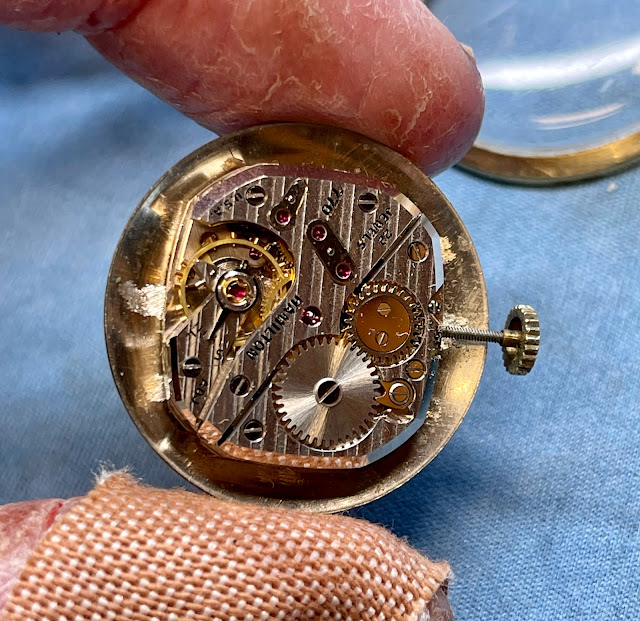 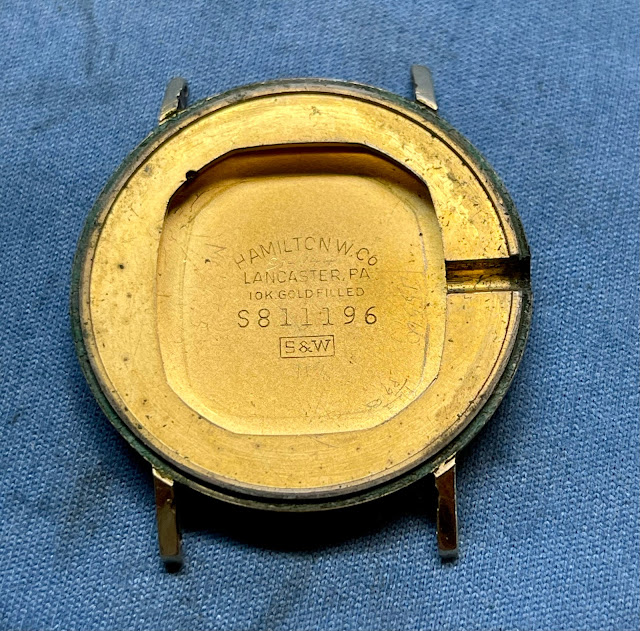 I do have a nice Hamilton crown to use - I'll have to replace the stem as well.  A LOT can go into replacing crowns, starting with having the correct style but often you need to trim a new stem too, so it all fits together perfectly. 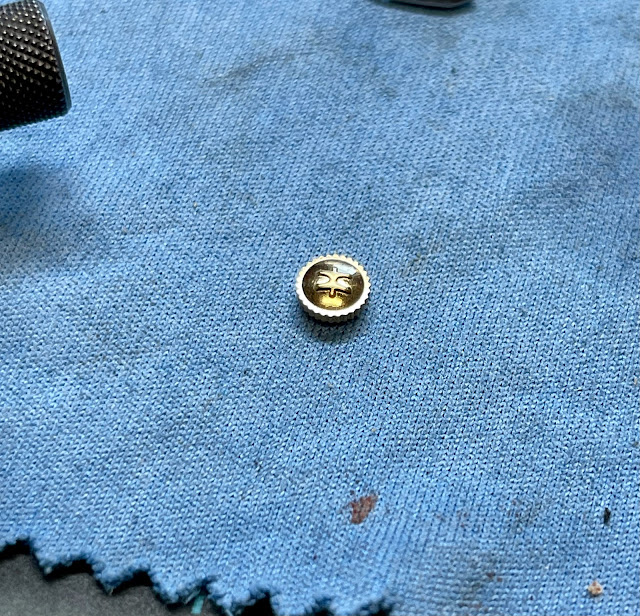 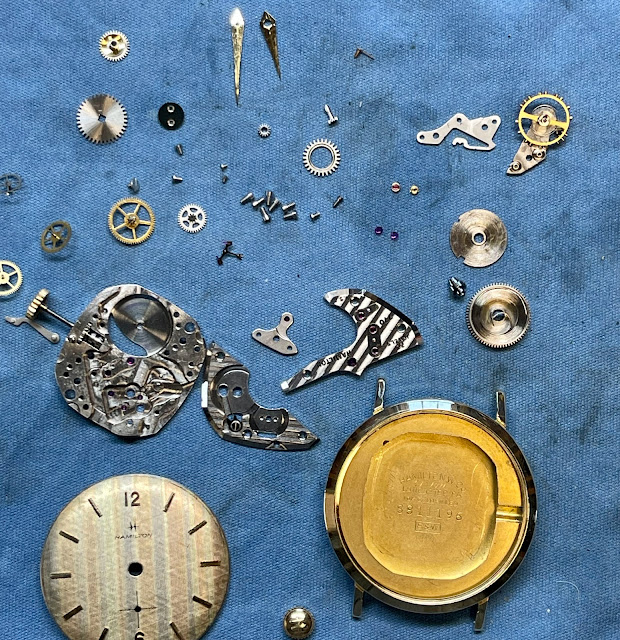 The newly serviced 770 movement glistens like a Christmas star in the sky and it's ticking away with great motion. 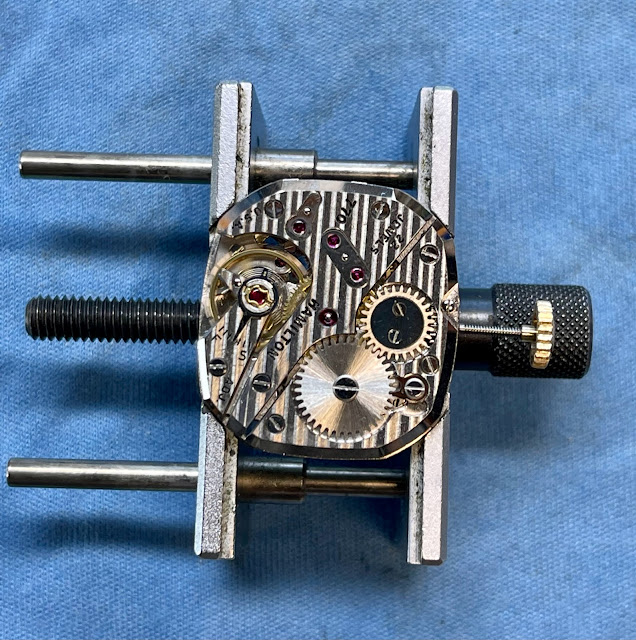 Initially running a smidgen slow, a slight tweak to the regulator brings the beat rate right in line.  The beat error is within my personal specs of under 3.0ms.  I could probably reduce it but that could also result in an accidental mishap that ruins an otherwise fine balance.  I've learned over the years that good is good enough when it comes to some things. 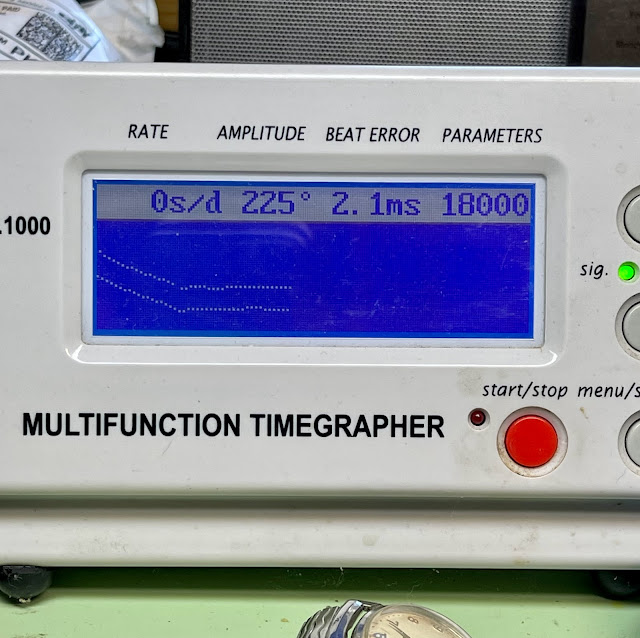 I couldn't find the matching bracelet online but I was able to find a very nice tan leather strap that complements the watch perfectly.  I think Santa really approves. 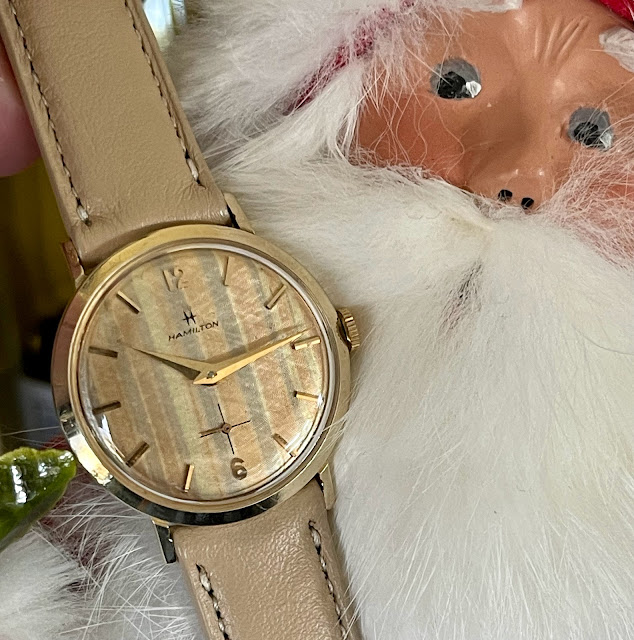 Here's a side view so you can appreciate what a proper crystal and crown adds to the overall aesthetics.  This is really a sharp looking watch! 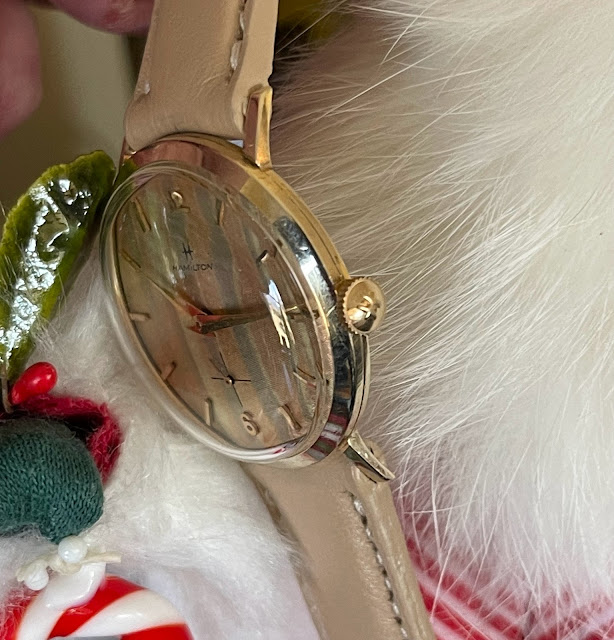 As 2021 comes to a close I'd like to wish you a very Merry Christmas and a wonderful new year.  I hope your own personal business is good too and if not, try to find the opportunity in 2022 to show a little  charity, mercy, forbearance, and benevolence to your fellow man.  We all have our own ponderous chains to work on.
And out of curiosity, if I've been able to bring you a little joy to you this year or over the past few years, please drop a comment below to tell people about it and maybe inspire other folks to pay it forward in 2022.
Merry Christmas!
Posted by HandyDan at 7:26 AM