Of course, over those 30 years Hamilton introduced automatic movements, Electric movements, models cases in stainless steel, even a variety of entry-level moves with Swiss-made manual winding movements. In 1934 you had your choice of a 987F movement or a 979F, when it came to wrist watches.

Anyway, I recently received a very nice Hamilton Thin-o-matic in need of some TLC.  It took me a while to figure out what model it was... either the T-203 or the T-209.  I'll give you my rationale below but I'll let you make up your mind too. 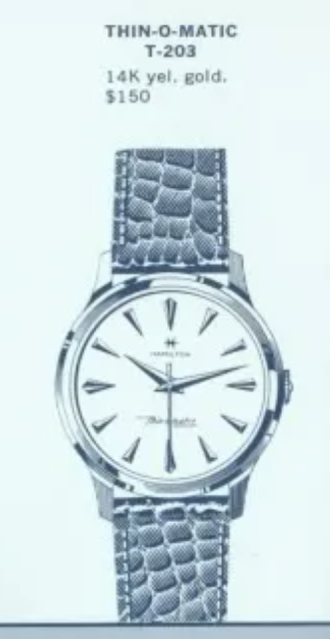 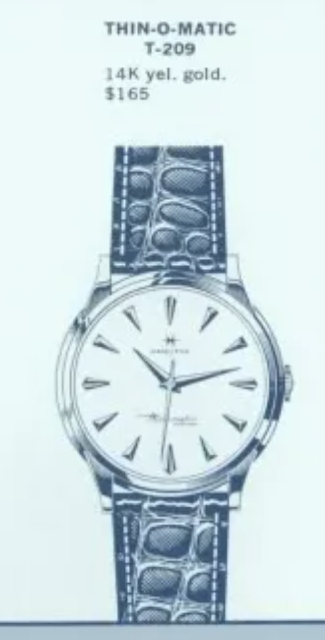 Both models appear to show the same dial and style of hands.

My project watch is pictured below.  Identifying a watch model requires taking into consideration several attributes... 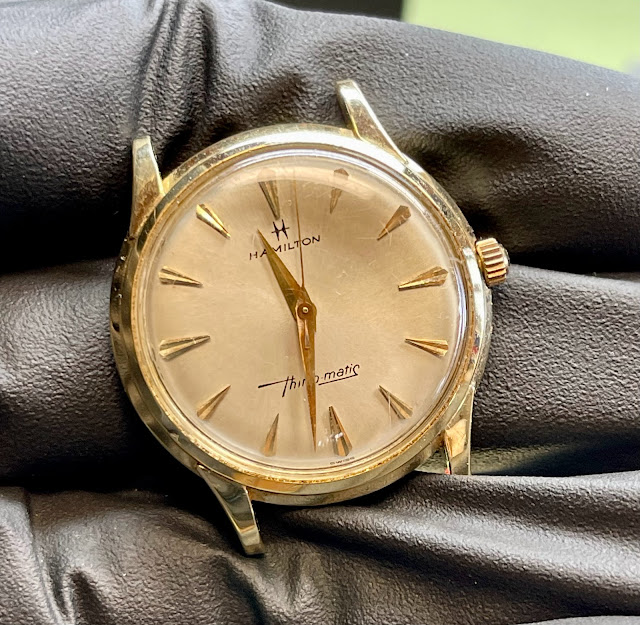 Based on the photos above, which model do you think this is... the T-203 or the T-209?
The artists behind the catalog images always did a good job with their depictions and if you look very closely at the cases, you'll see the lugs attach to the case slightly differently.  Both bezels appear to have two steps around the circumference.  On the T-203 the lugs stop at the outside of the case.  On the T-209 the lugs go a little farther into the case, and join the first step.  In other words, on the T-203 you could trace a pencil point all around the bezel without hitting the lugs but on the T-209 your pencil point would hit the lugs.
So I went with the T-209 on this watch.  Let me know in the comments below if you'd disagree.
Looking at the back of the case, you can probably guess this model has a micro-rotor automatic tucked inside.  The case back is flat.  I don't see any sort of seam so I suspect this is a one-piece case and opens through the crystal. 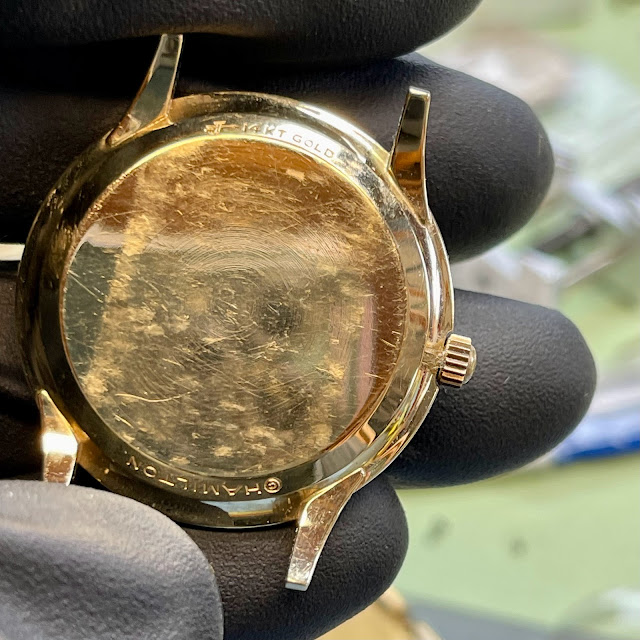 Watches that open through the crystal have a two-piece stem.  I have a small tool that I use to gently pry the crown out of the case and separate the male side from the female side of the stem. 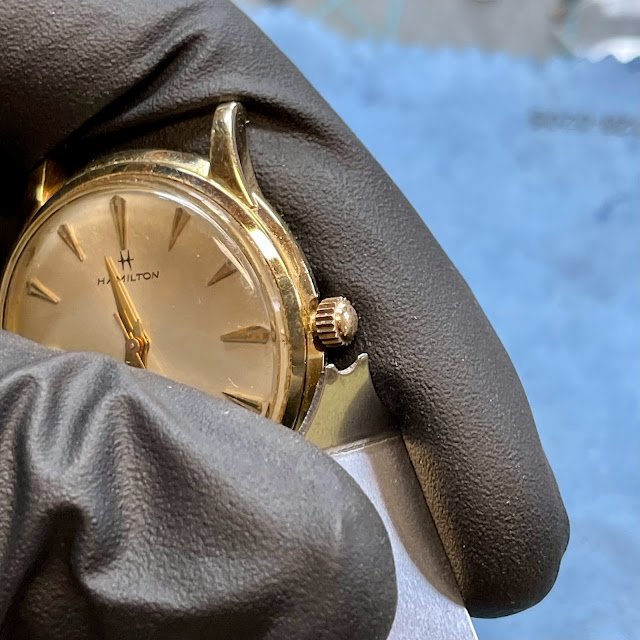 You can see below the female side of the stem is in the crown.  Usually it's the other way around. 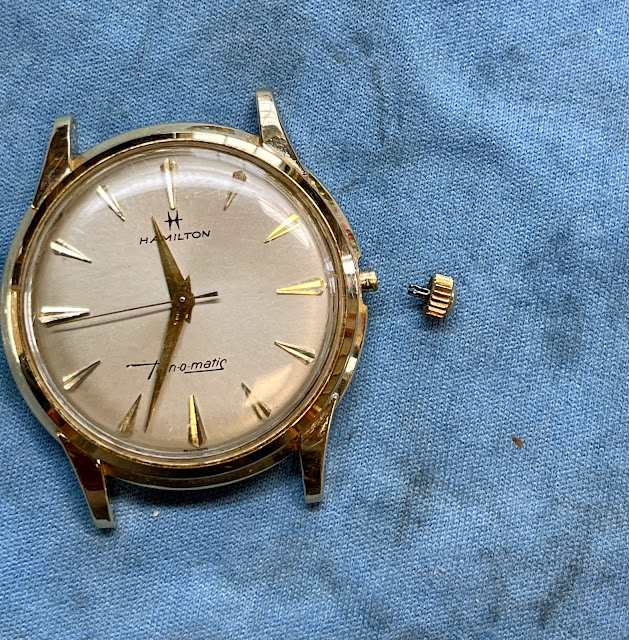 Once the stem is separated, I can lift off the crystal and the dial / movement will come out the front of the bezel.  There's a little bit of wear around the edges of the dial but nothing too dramatic. 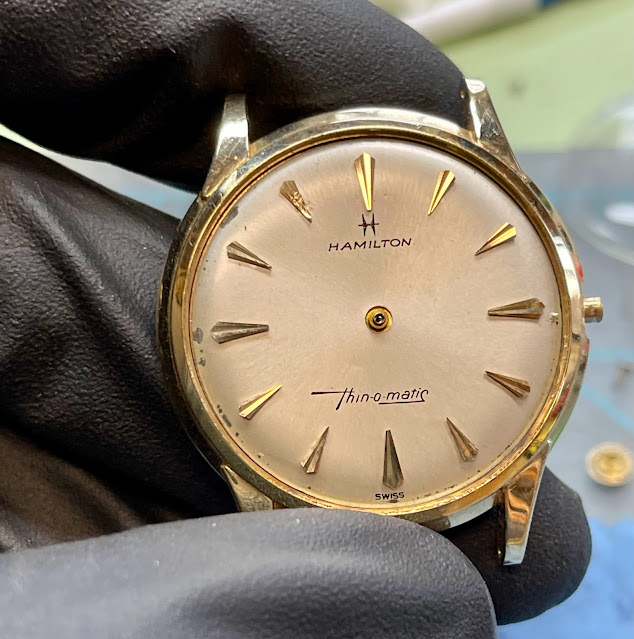 As suspected, there's a micro-rotor movement inside.  In this case, the 17 jewel 620 caliber.  These movements were made by Buren in Switzerland.  Hamilton eventually would acquire Buren and, after that, close the Lancaster PA factory and move production to Buren's Swiss facilities. 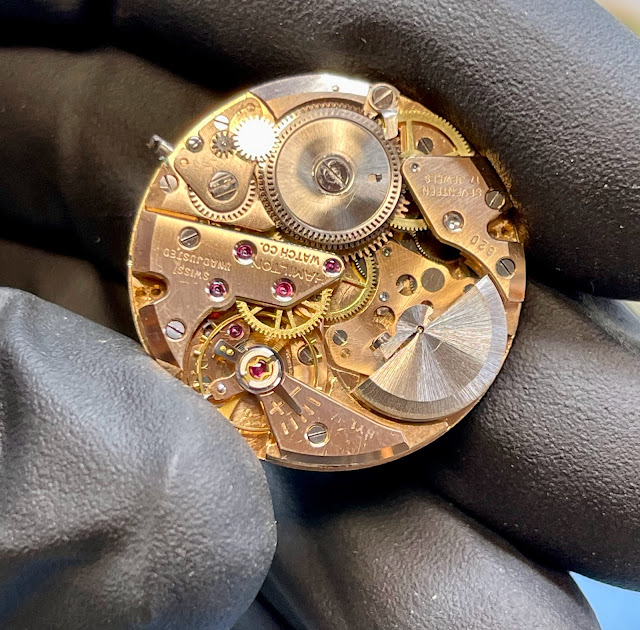 I can see from the circle inside the case back that the rotor has been rubbing the inside of the case.  I can also see a previous watchmaker's mark inside the circle.  So this watch has been serviced at least once since 1964. 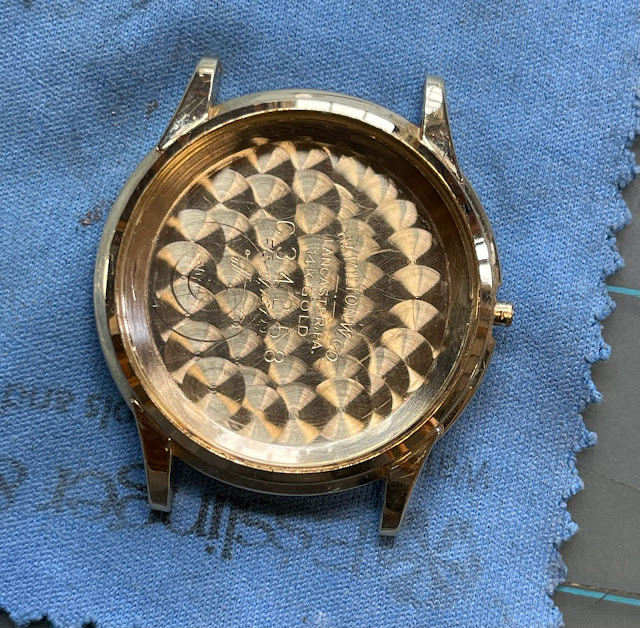 The dial-side of the main plate looks very clean so I don't think this watch has had a lot of use over the last 5 decades. 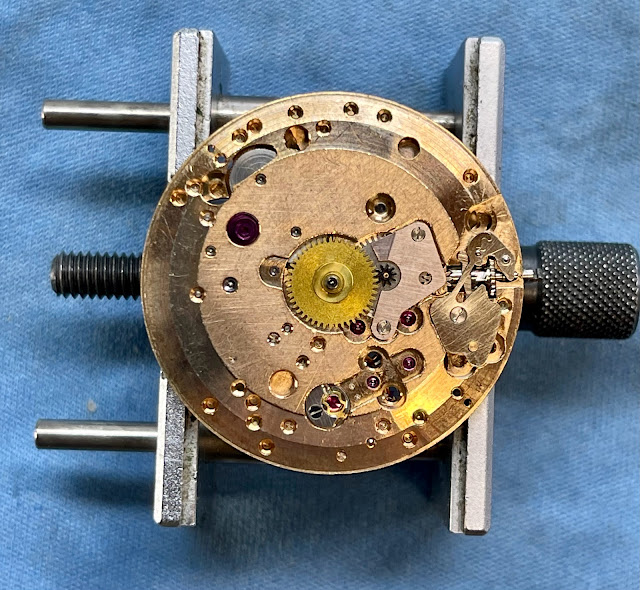 Everything is taken apart and thoroughly cleaned and dried.  There are a LOT of parts in a micro-rotor movement and a lot of places to lubricate during reassembly. 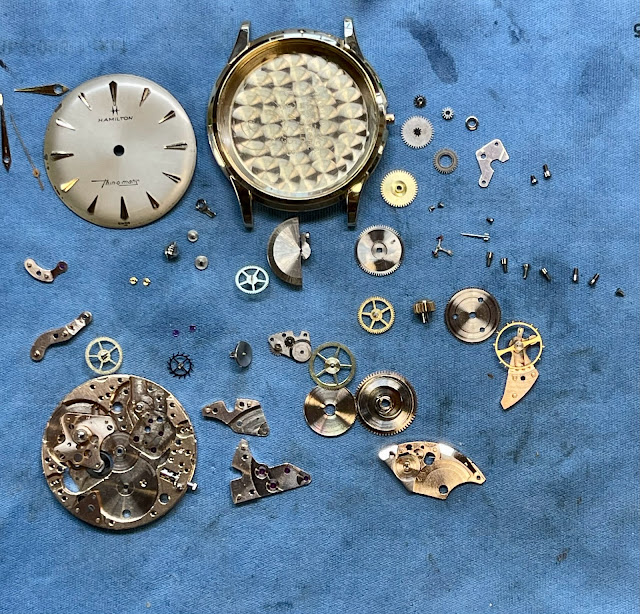 You might be able to tell how much brighter the freshly cleaned movement is.  It really sparkles now and it's running with a nice motion. 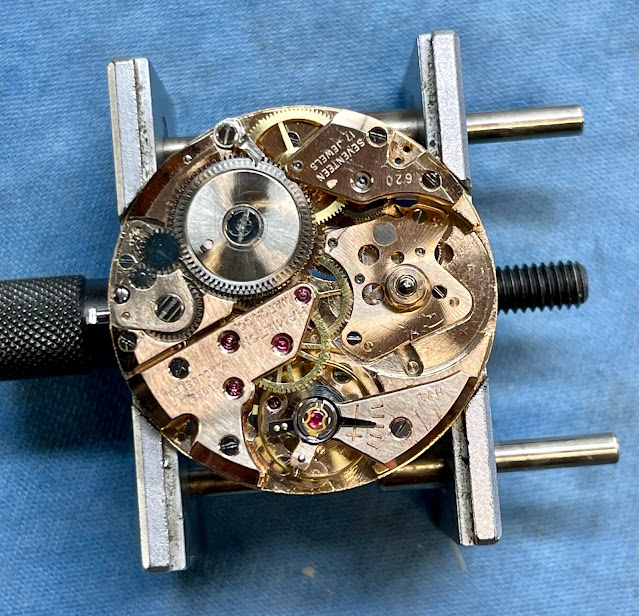 The timer agrees.  It's running just a smidgeon slow but I really haven't wound it much yet since there's no crown on the movement. 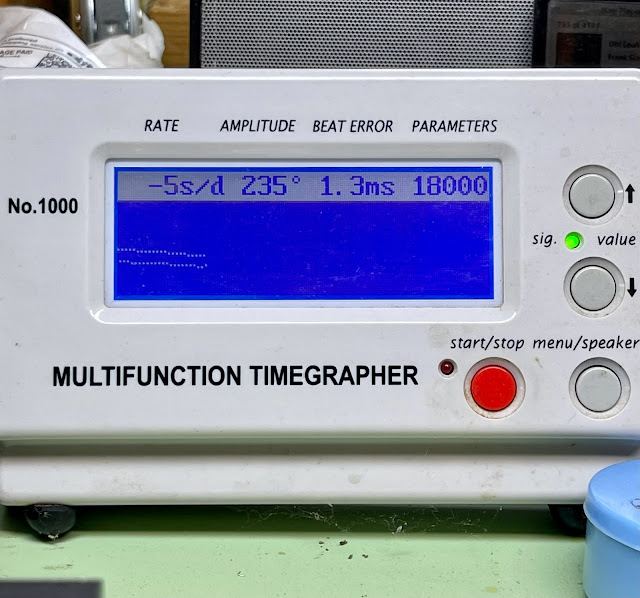 Everything goes back into the case and a new crystal is installed to complete the overhaul.  This is a beautiful watch and has styling that would be appropriate in a Hamilton showroom today. 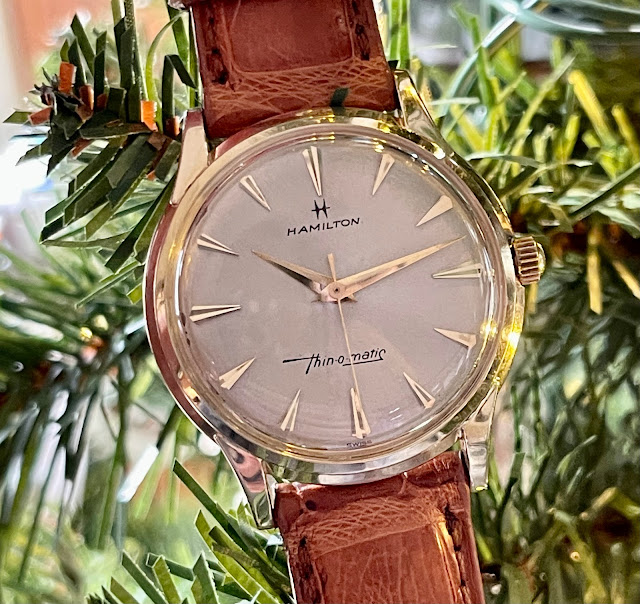