The Hamilton Watch Company was started in 1892 with the mission of providing industry-leading watches for the railroad industry and discerning business men.
In the 19th century, railroads were the principle method of delivering people and goods across the United States.  In many cases trains moved in BOTH directions on the same track.  The only way to keep trains from running headlong into each other was to define a strict schedule of where to be when and to keep consistent, accurate time on every train.
By the turn of the 20th century, Hamilton Watch Company was the "Watch of Railroad Accuracy".  Unlike other brands, Hamilton only made watches of the highest quality.  With rare exception, the minimum number of jewels in their most basic grade was 17.  Watches were only available through legitimate jewelers.  The catalog prices of Hamilton watches was the price offered to the public.  They were not to be discounted and jewelers who did not live up to these expectations would not be allowed to carry Hamilton watches.

In general, men's pocket watches were size 16 or size 18, although smaller size 12 watches were produced for non-railroad applications.
One of the highest grade early size 16 watches was the 21 jewel 960.  Priced at $50 in 1906, that was about $1,500 in today's dollars - definitely not a watch for the "average Joe".  You could get a very similar caliber 961 which was designed for a side-winding hunter case with the pendant at the 3 position. 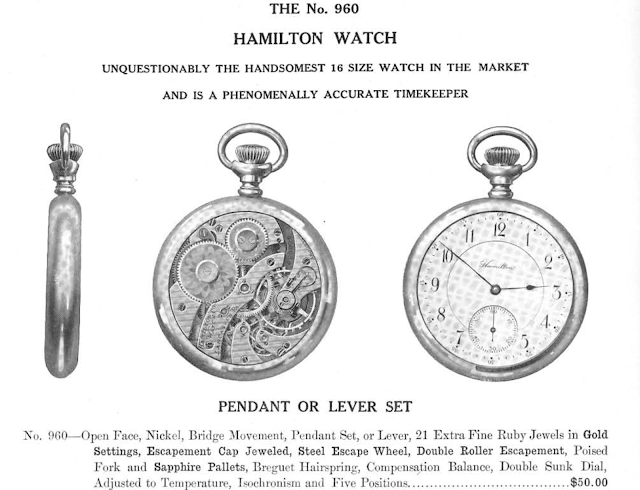 My 960 project watch is a bit of a sleeper.  From the look of it, you would never expect it to be such a high end watch.  Back in the day, you typically picked out the watch movement and then the case to install it in.  So you could put an entry-level movement in a solid gold case or a high end movement in a simple nickel silver case.  For my project watch, the movement was installed in a 25 year gold filled case.  Based on the amount of wear thru, this case got a tremendous amount of use but the warranty expired 91 years ago. 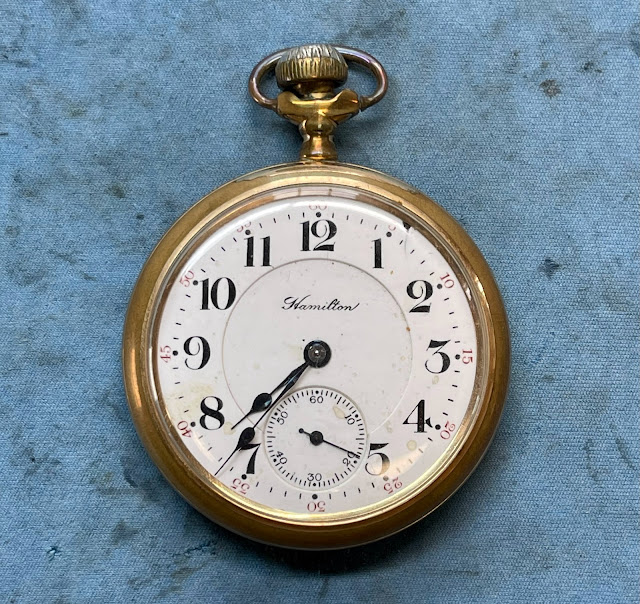 The case back is engraved with a monogram but it's hard to tell what it is.  I won't polish this case since the existing gold is very thin.  I'll just give it a good cleaning. 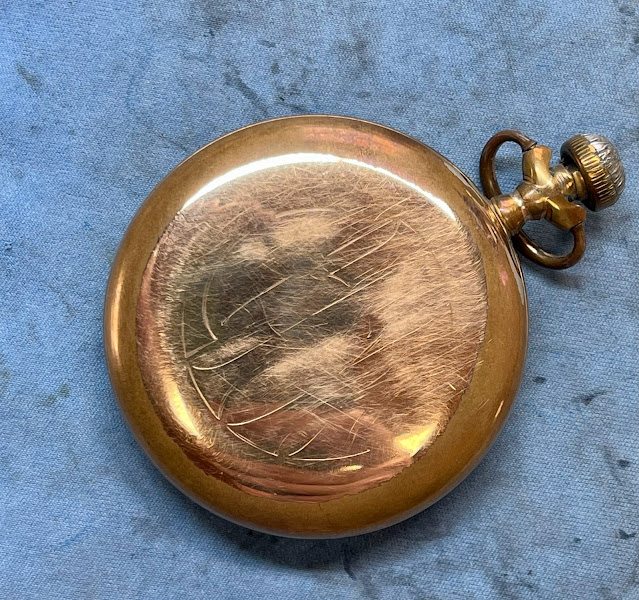 The industry standards for "gold fill" did not exist in 1906.  Cases were either solid gold and warranted "forever" or gold layers sandwiched around a base material like brass.  The thickness of the gold dictated the warranty so a 10 year case has less gold than a 20 year case.  A 25 year case had a lot more gold than the typical 1/20 ratio of "gold filled" but it was still not solid gold.
Based on the inside of the case back of my project watch, this 960 has been through many watchmakers' hands over the last 118 years. 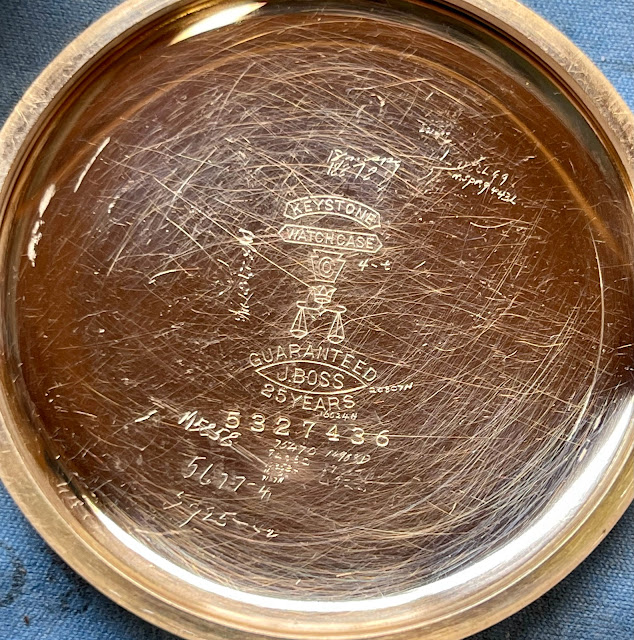 The crown on the pendant of the watch has lost its gold cap.  The silver metal showing is actually the base material of the crown and shows the texture of the gold that was originally on the crown.  In this photo you can really see the extent of the gold loss on the case. 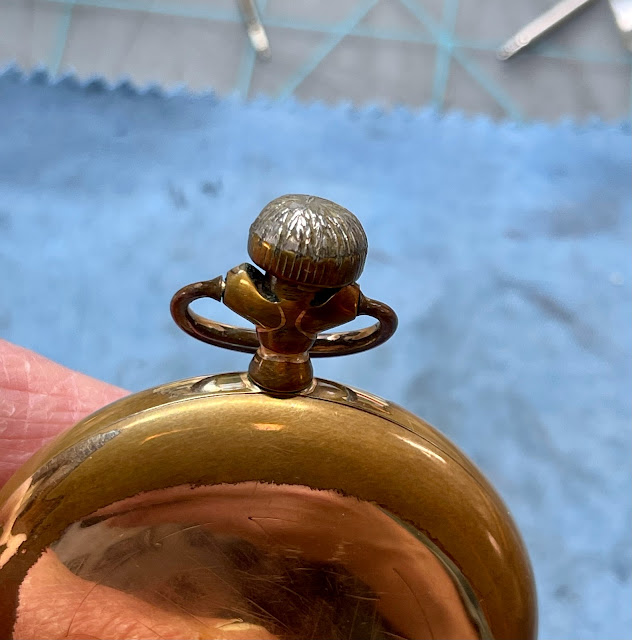 Once the back cover is removed you can see the 21 jewel movement inside - and what a beautiful movement it is.  The only distraction is the two holes on the balance cock that reveal the regulator spring / gooseneck is missing.  Based on the catalogs, this movement shares a spring with other period calibers but  only the 960, 961, 964 or 965. Unfortunately I don't have a donor movement to replace it.  However, the safety of railroads is no longer at stake and the movement will be just fine without it. 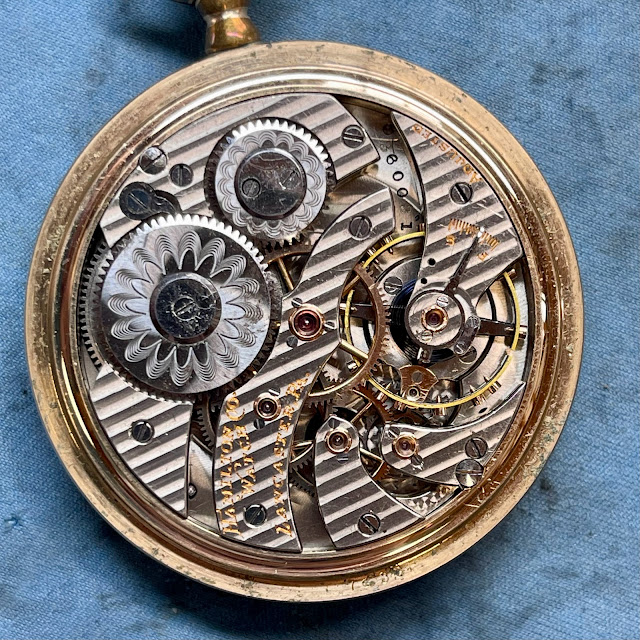 The 960 is a lever set movement so you have to remove the front bezel and slide the lever at the 1 out a little to set the time.  That's probably part of the reason for the extensive case wear - you need to unscrew the bezel to access the lever... do that enough times over 25 years and you will probably wear off some of the gold.  You might also chip the dial a little, like this enamel watch dial shows. 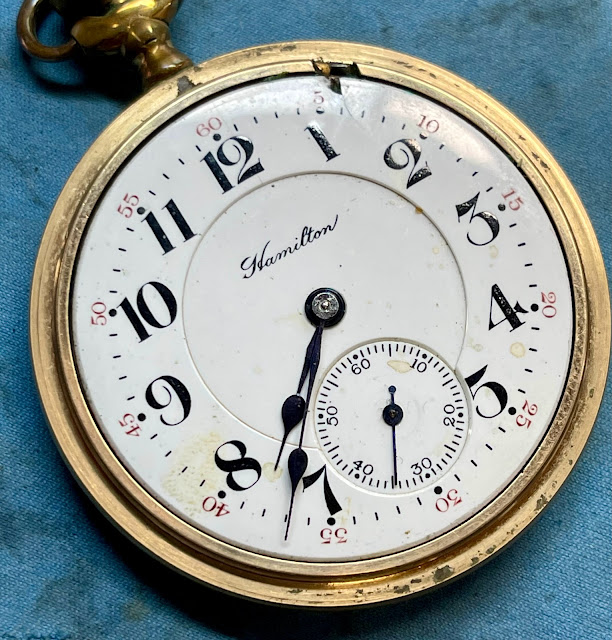 Early Hamilton pocket watches had four dial feet.  Eventually movements were changed to three dial feet locations so swapping dials from one movement to another requires having the correct number of feet.  These dial foot screws are much smaller than other calibers I've seen.  That's one of the challenges of really early Hamilton calibers, not all parts are interchangeable if you're missing something. 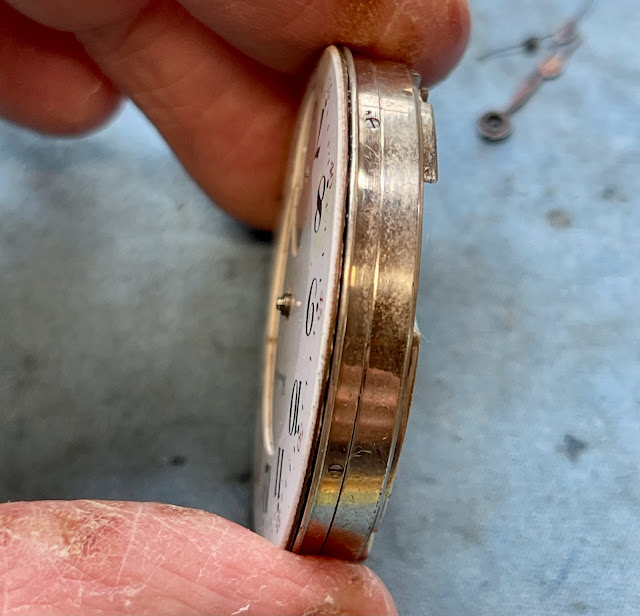 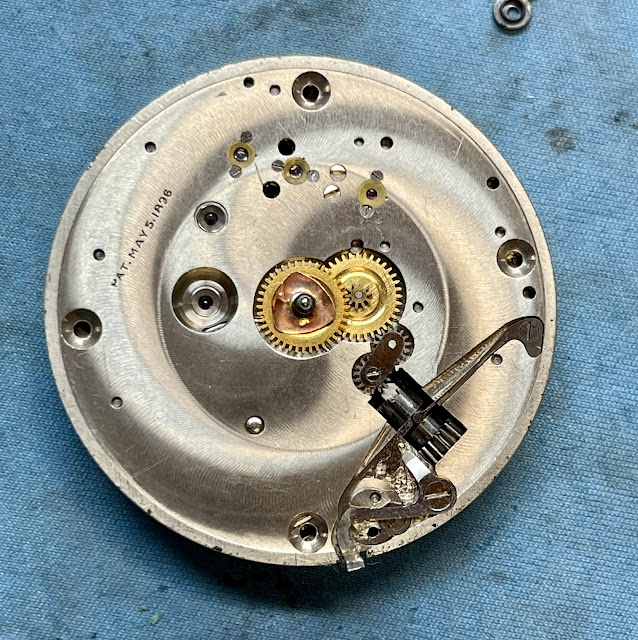 With the mainspring fully released, the first part off is the ratchet wheel.  Now the movement is de-energized and can be carefully disassembled. 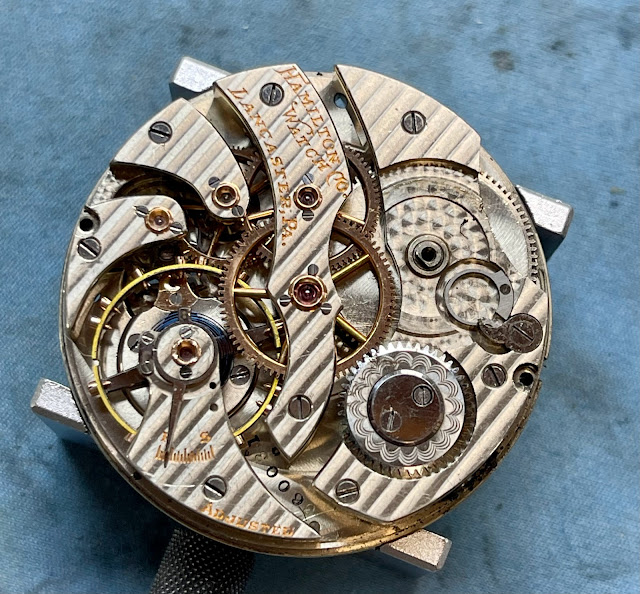 In this photo you can see one of the distinctive parts of the 960 movement - the train wheels are solid gold, except for the escape wheel.  The escape wheel is steel and since it's what get's banged into by the pallet forks, steel is actually a premier material over other choices of the time.  The ruby jewels are also set in solid gold. 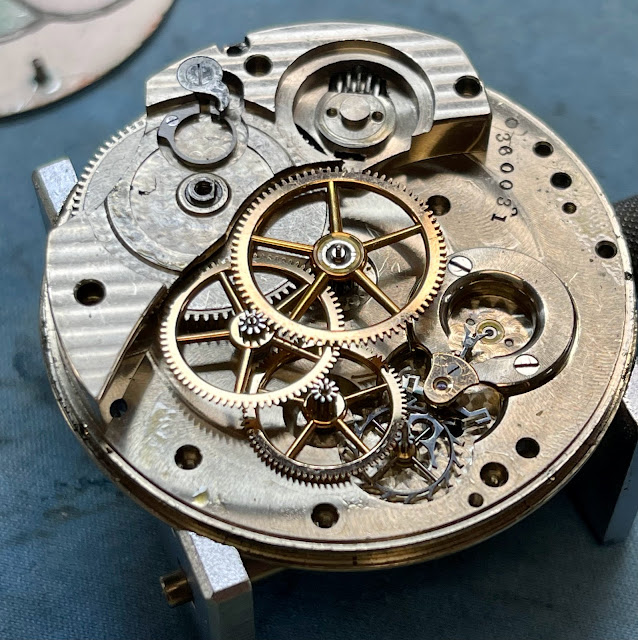 The mainspring inside the barrel is a white alloy spring and does not need to be replaced (just cleaned). 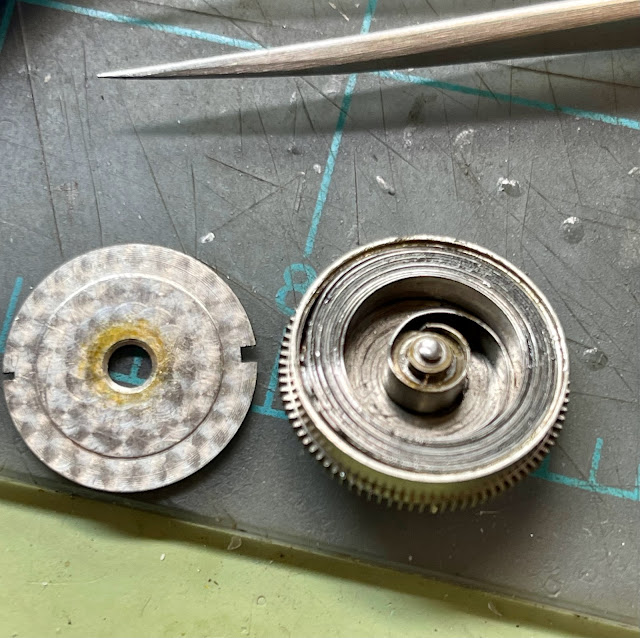 Everything is thoroughly cleaned and dried so that now it can be reassembled with fresh lubrication.  This movement is noticeably brighter and shinier than before - a testament to why cleaning is important. 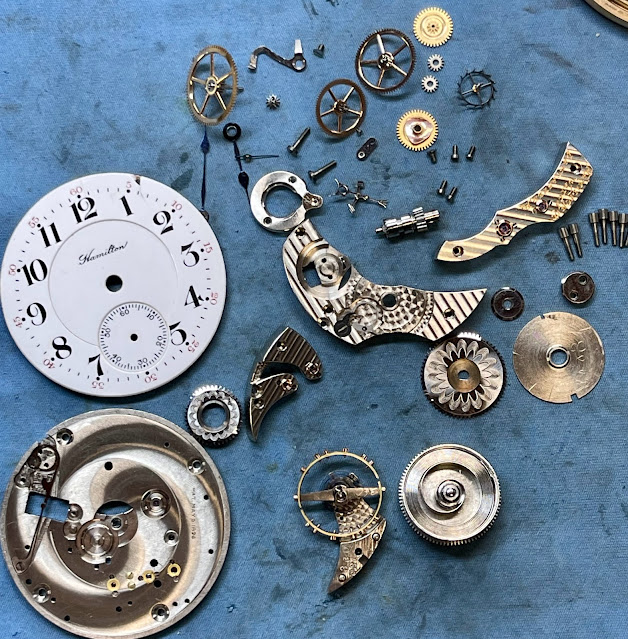 Everything is reassembled with the exception of the balance.  At this point I can wind the mainspring up a bit so that once the balance is back in place it will start ticking and show me everything is aligned correctly. 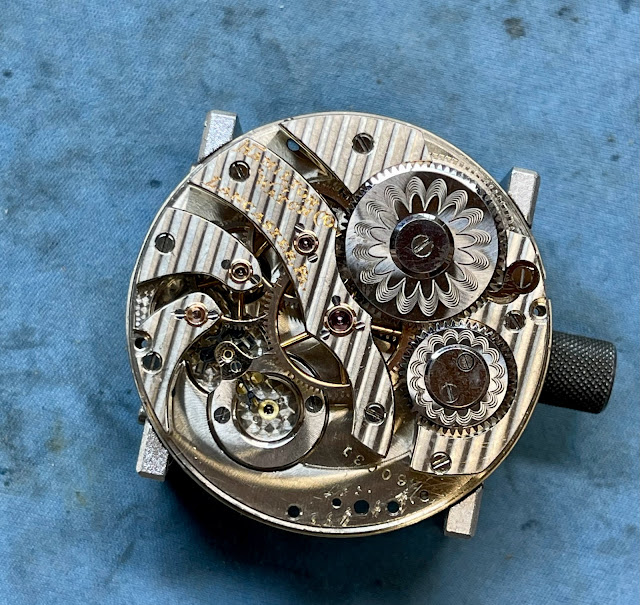 It's always a satisfying relief to see the balance start to swing back and forth with a vigorous motion.  Now to see that the timer thinks of it. 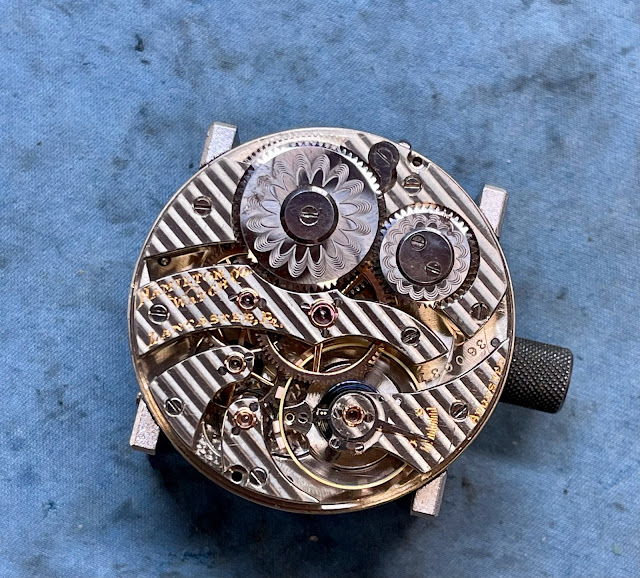 You can see in the photo below that this 960 is tick ticking a little fast but has great motion otherwise.  The beat error of 0.0ms means the balance swings equally from one side to the other. 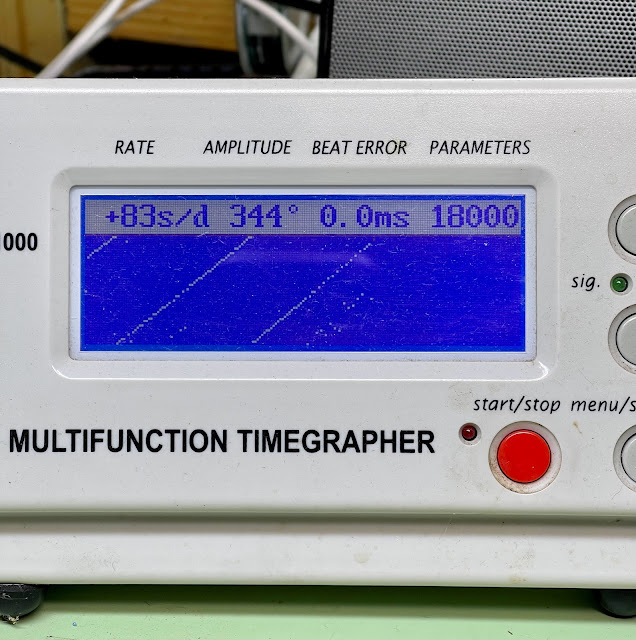 A slight tweak to the regulator slows the watch down and a couple of more tweaks get it to settle in to 14 seconds fast per day.  I'll leave it there for now and check it again after a while. 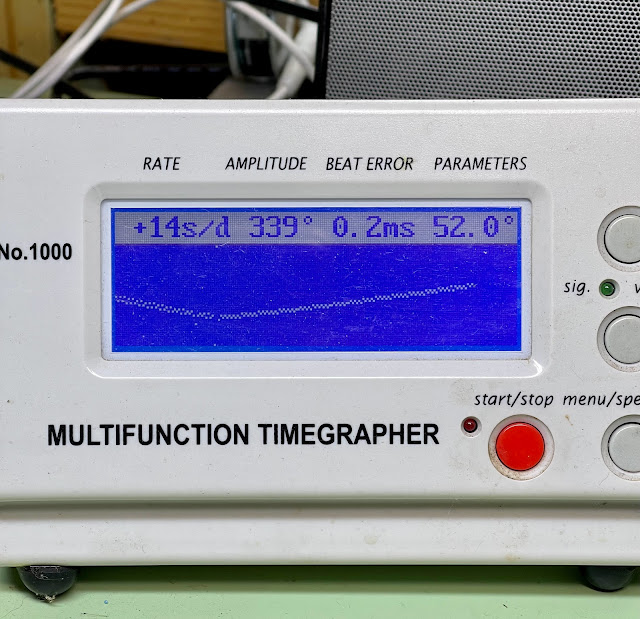 The reassembled movement goes back into the case and is ready to go back into a vest pocket somewhere.  This is such a beautiful movement that it would be tempting to recase in one of those salesmen cases with crystals on the front and back - as admiring the movement is hard to do with a solid case back. 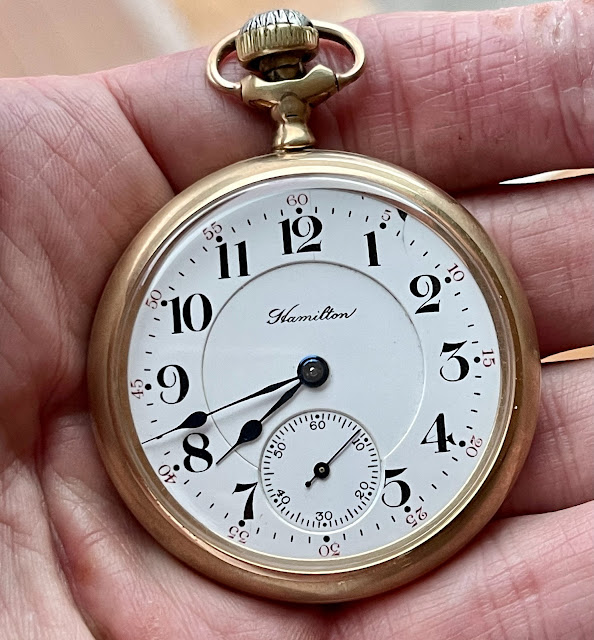