I've been going through a bit of a dry spell of finding Hamilton models I haven't already documented on the blog.  Even thought it's been a while since my last post, I've been super busy with a lot of projects but nothing that hasn't already been seen here before.

That said, I have had an interesting project waiting in the wings for well over a year!  It's a 1933 Lee, which I have documented already.  However, this one has an interesting story.

The Lee was introduced in 1933 and produced for two years.  It coincides with the Grant that was produced at the same time and I have to wonder if the two were named for the famed Civil War generals.

The Lee is an interesting model for several reasons.  First, it's one of several gold filled models that received the 6/0 size 19 jewel 979F movement that was primarily reserved for solid gold models.  Second, it featured an interesting hammered silver dial with applied gold figures.  You could also get a luminous dialed version.

In 1934 the case material for the Lee and the Grant was changed to 10K gold filled - a first for any Hamilton model and the movement was changed to the 17 jewel 987F.  The Grant was also offered in a sterling silver case - another first for Hamilton.  This was done to lower the price point of some models, it was the Great Depression after all, and the prices were reduced by about 15%

My Hamilton Lee project watch caught my eye back in 2020 - I've had it waiting in a pile of other watches for almost two years.
I bought it for several reasons... but first and foremost, the case has very little wear.  That's almost unheard of for this model!  Typically the tops of the lugs and corners of the case show extensive wear through. 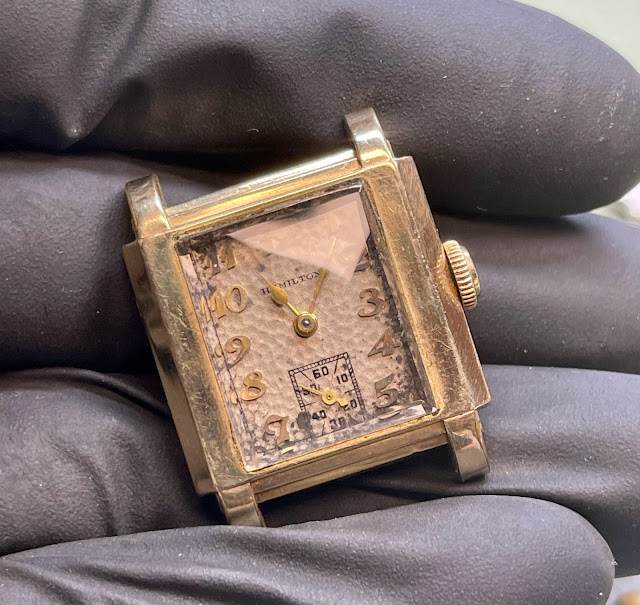 Another reason I liked the watch was it has a very nice presentation to an Army Major from his fellow officers.  More on that in a bit. 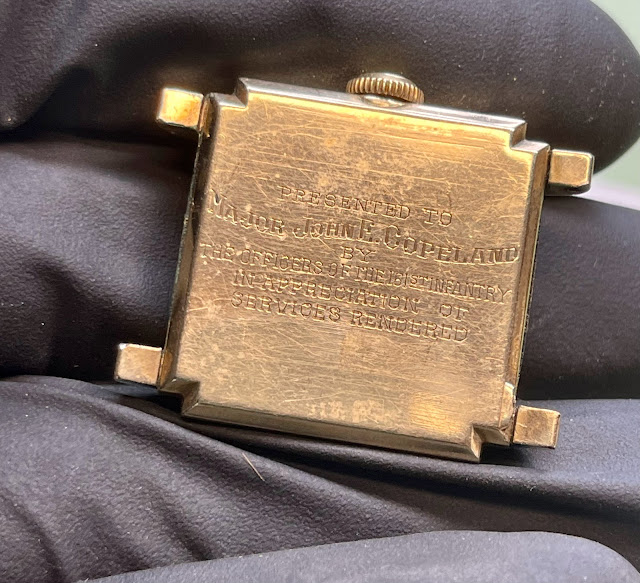 The Lee is unique in the hammered silver dial.  This one shows a bit of grime around the perimeter, which is interesting since the rest of the case is so pristine.  I guess it's due to the moisture or air and less to wear and tear. 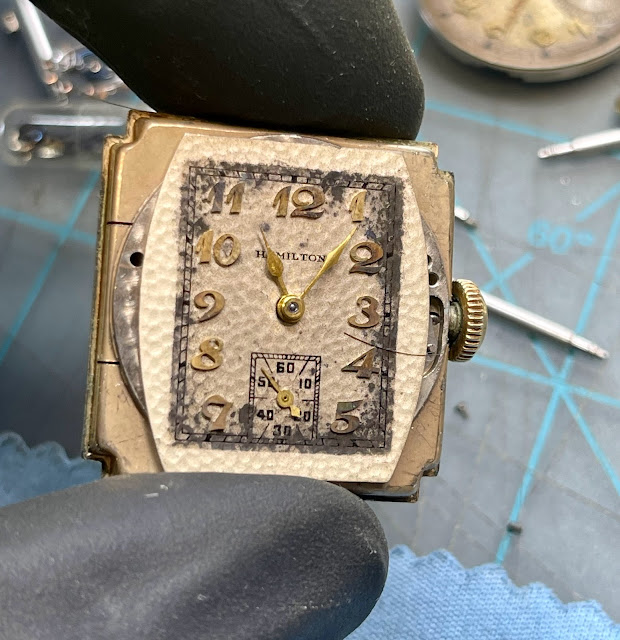 Inside the 14K gold filled case is a 979F movement - that's another reason that I purchased the watch.  These movements are the best that Hamilton made at the time and the center wheel is solid gold. 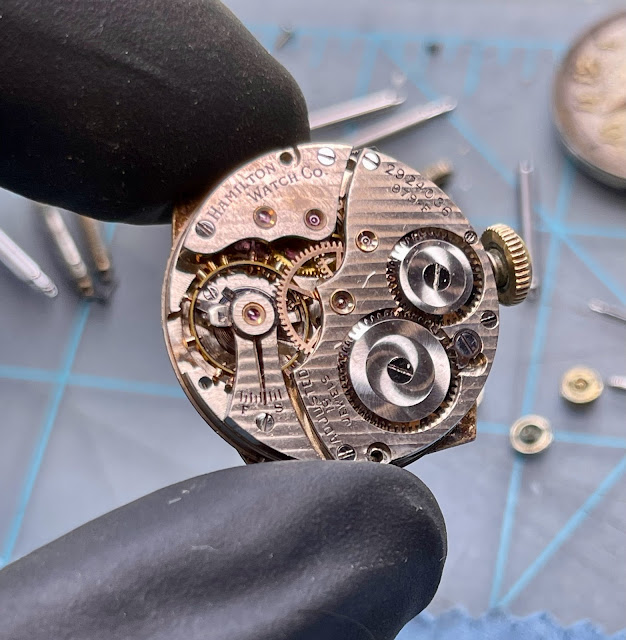 The steel mainspring inside the watch is "set" in a fairly tight coil.  This reduces the potential energy of the spring and the watch will run less than a day with a mainspring like this.  I'll install a fresh white alloy Dynavar mainspring to give it 35+ hours of power reserve. 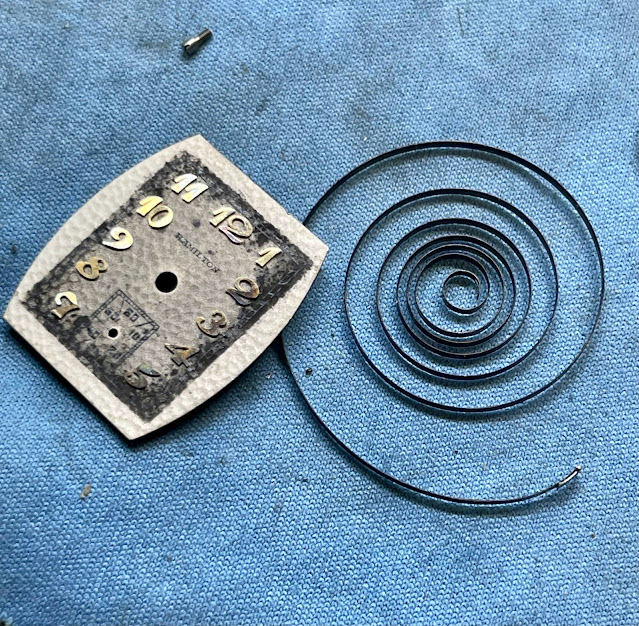 If I release this dynavar spring it will splay out in a large S, coiling in the opposite direction.  I'll try to install it directly from the carrier, I just need to make sure I put it in so the coil goes the right direction. 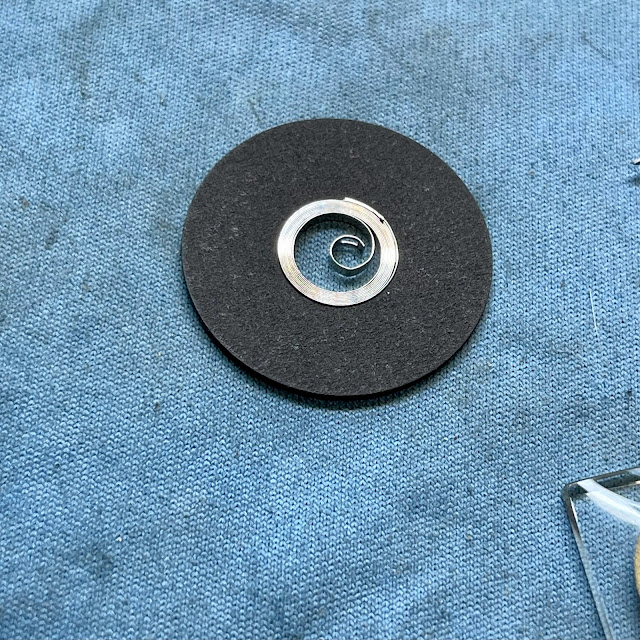 The crystal that came on the watch is in good shape and double thick - that's what saved the case from wear.  However, the edges are also chamfered and that's not the correct look for the Lee.  So I will change it to a proper style that is also double thick. 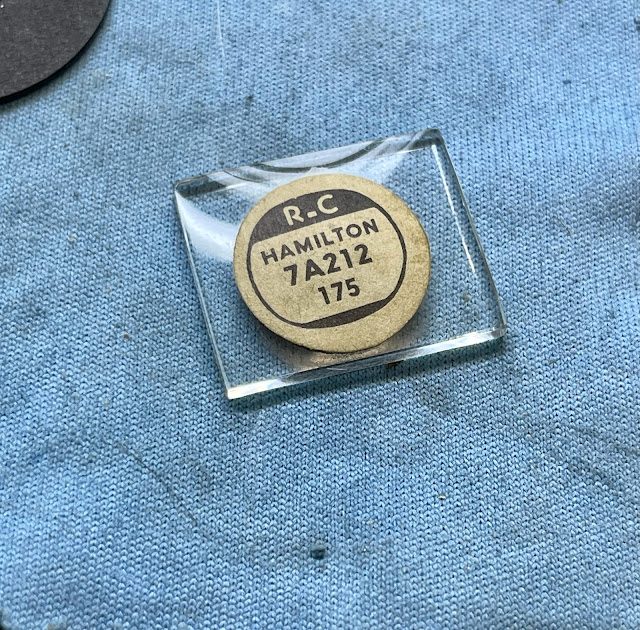 Everything is clean, dried, and ready to be reassembled.  I was able to clean up the dial slightly so it's not so dark around the edges. 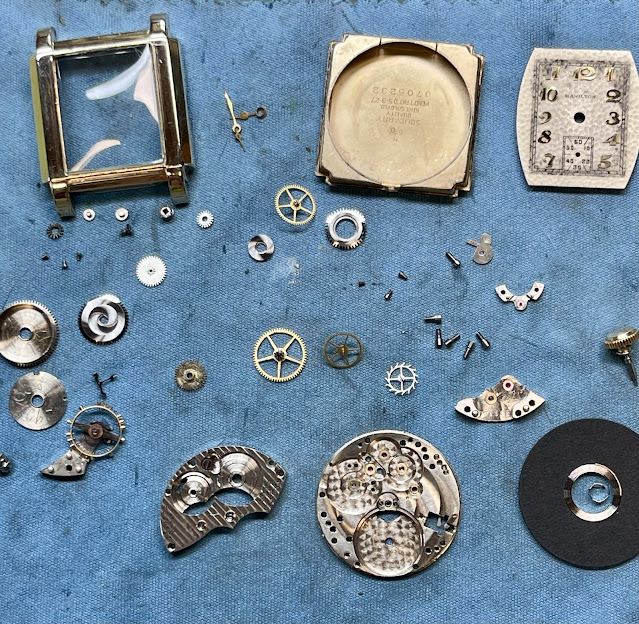 The reassembled movement is ticking away with a good motion.  The photo isn't capturing the full glistening of this cleaned movement - it really sparkles. 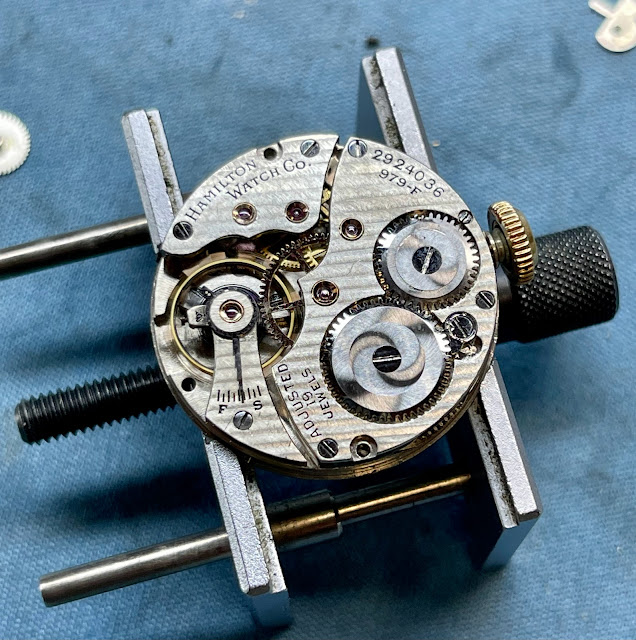 The timer likes what it hears.  The beat error is well within my specs of less than 3.0ms.  That's good because to try to adjust it would risk goofing up the hairspring.   Pre-1940 movements can be very finicky - it's best to let sleeping dogs lie when it comes to pre-Elinvar Extra hairsprings. 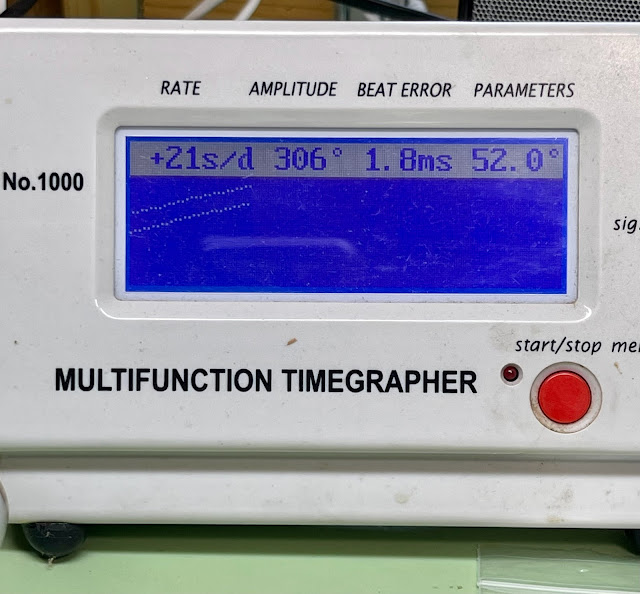 Here's an after-shot of the finished project on a nice genuine gator strap.  What a beauty!  Try to find a better one! 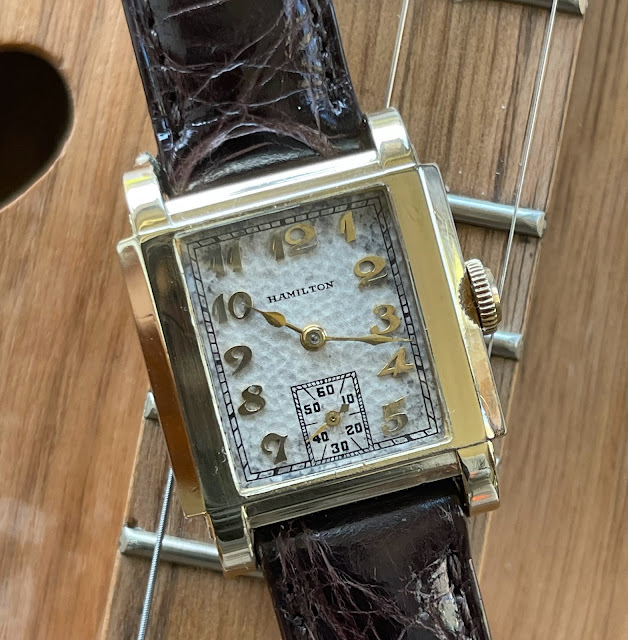 In this shot you can better see the presentation to John Eubank Copeland.  He was a Major in 1933 and a veteran of World War One.  Little did he know that in eight more years he'd be a veteran of another World War. 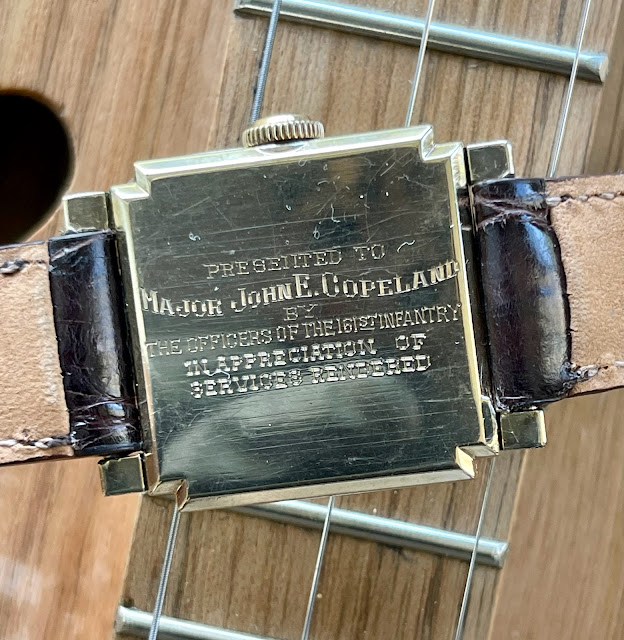 Major John E. Copeland would eventually become Brigadier General John E. Copeland.  He saw service during WWII in both the Pacific and the European theaters.  In mid-1945 he assumed command of the 65th Infantry Division until he retired in 1946. 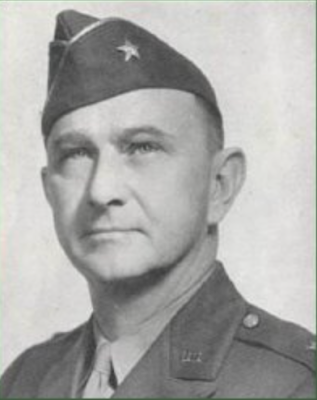 John Copeland passed away at the age of 88 in 1978 in Birmingham, Alabama.
Posted by HandyDan at 2:20 PM