I've talked quite a few times about my favorite models, of which there are many.  I have my least favorite models too, which I don't talk about often but I have an opportunity to do now, sort of.

My least favorite watches are some of the funky and chunky examples from the mid-1950s like the 1954 Kenmore.  That's not entirely fair though as when you pair the custom bracelets to them they really aren't that bad.

The set of models that I really don't like are the later addition micro-rotor movements in the TM-line of Thin-o-matics.  That's unfortunate, as they aren't unattractive, they are just difficult to maintain, as you'll see in this post on the 1968 Thin-O-Matic TM-2601.

The TM-2601 was made through 1971.  The micro-rotor movements used in Hamilton's Thin-o-matic line were made by Buren, which Hamilton purchased in the 1960s.  In 1969 Hamilton moved production from their Lancaster, PA factory to Buren's factory in Berne, Switzerland... and the servant became the master.

Microrotor movements come in two flavors... pink and silver.  The pink calibers were the initial movements introduced in the late 1950s and used throughout the 1960s.  In the late 1960s the 2nd generation silver microrotors were introduced.  They're easy to identify as they are comprise the TM-line of models.  With a date complication they would be Dateline TM-models.

The TM movements were not produced for very long and they were also used in high end watches like Breitling.  Spare parts have long been exhausted so when you need parts you're likely out of luck and will need to scavenge from donor movements.

The TM-2601 has a solid 14K gold case, thus the 2-series designation.  Based on the catalog image it originally came with a croc or alligator strap.  The bezel is reeded, like the edge of a coin.  It's a very striking watch.  The catalog indicates it came in yellow gold but I've seen an example in white gold as well.

My project watch sheds more light on what the catalog leaves out.  The dial has solid gold markers and numerals.  It represents the finest that Hamilton had to offer.  My project watch appears to be unworn and presents without the slightest hint of bumps or bruises. 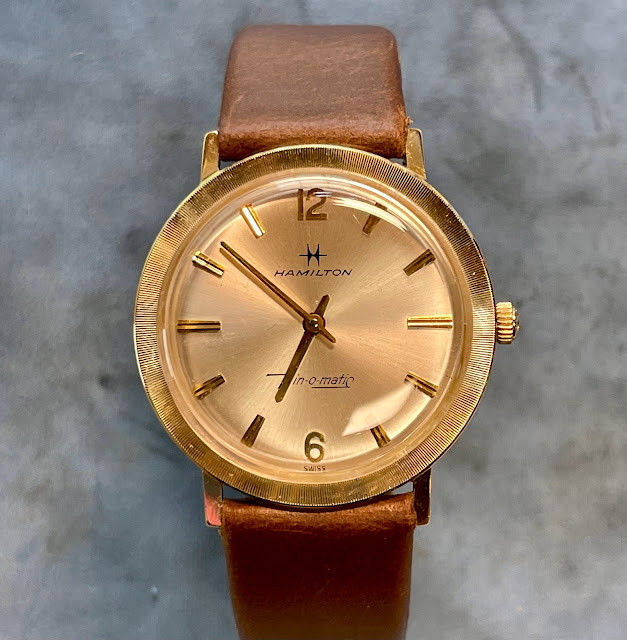 The case opens through the crystal and that process begins with removing the crown by separating the two-piece stem.  Then the crystal is lifted and the movement will come right out. 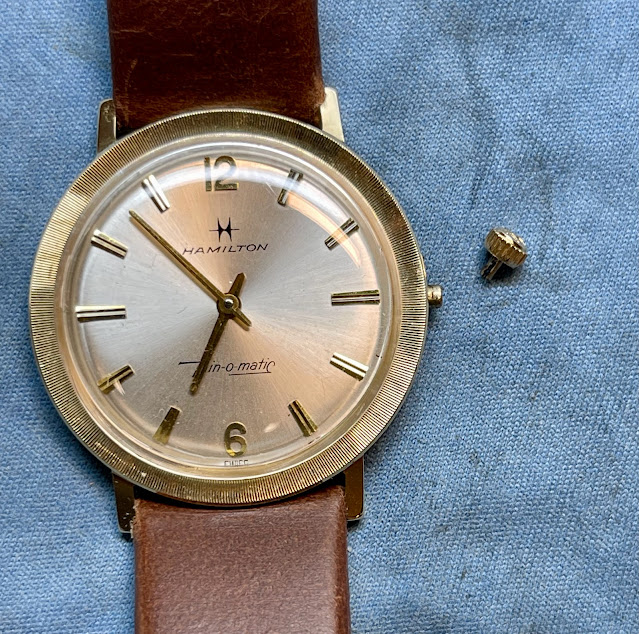 The inside of the case back has no markings from prior watchmakers but there's a screw missing from one of the bridges.  There was some dust inside the case and on the dial so I suspect that I'm not the first person to open this watch in the last 50 years.  The missing screw is not in the case, I doubt it left the factory that way. 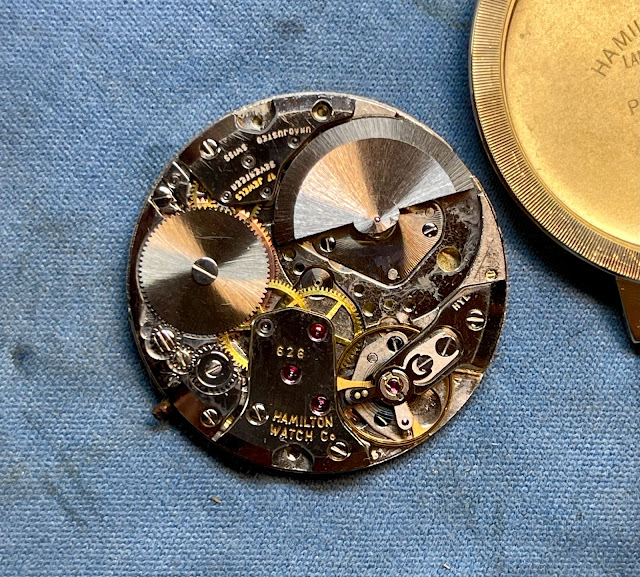 In the shot below I have removed the bridge that covers the setting wheels to show you exactly why I don't like these movements.  The largest wheel is the minute wheel, just to right of it is the smallest wheel in the train and it's the offset center wheel.  The pinion on the center wheel serves as the cannon pinion.  Normally the cannon pinion is what the minute hand attaches to but in this movement it's "offset" and not in the center.  It has to be tight enough to not slip on the center wheel arbor as the movement moves the hands, but slip when you use the crown to set the time.  It's very small and difficult to adjust so it's not unusual for it to loosen up over time and allow the watch to appear to run slow.  In effect, a loose cannon pinion prevents the hands from moving as they should. 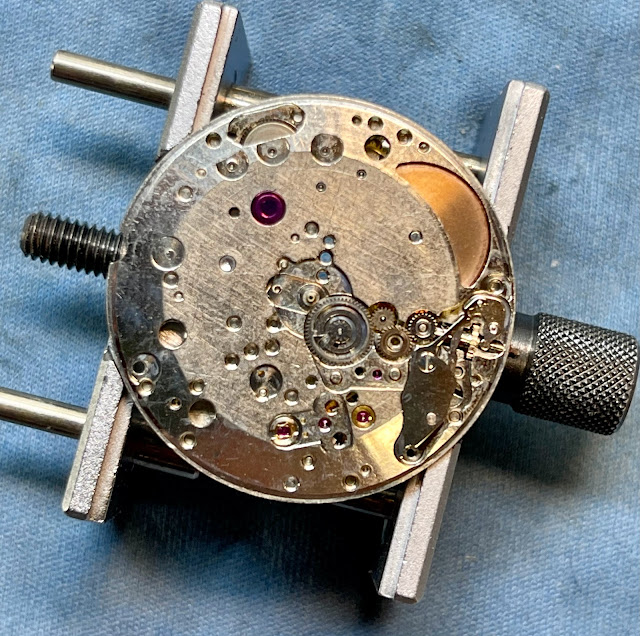 With the parts removed from the front of the main plate, I can start to strip the back side.  It's important to take photos along the way so I make sure I put the parts back in the correct orientation. 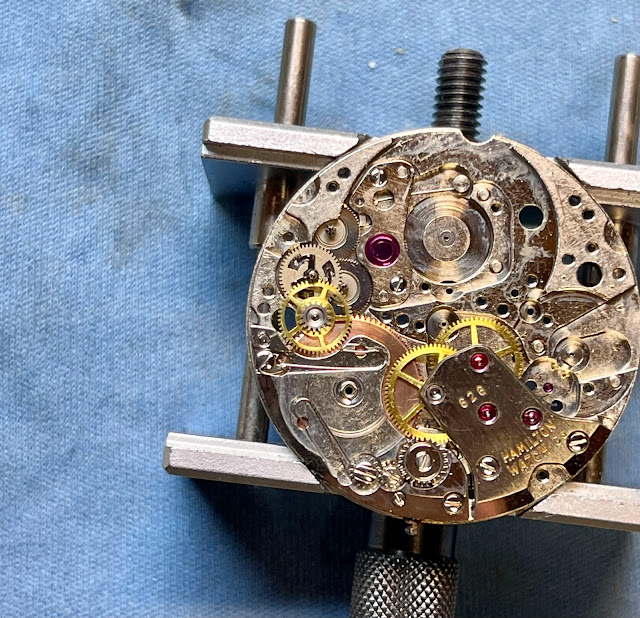 Well here's another problem, one of the barrel bridge screws is broken.  Maybe it will come out in the ultrasonic, maybe I can prod it out with a needle, otherwise my bag of tricks is limited. 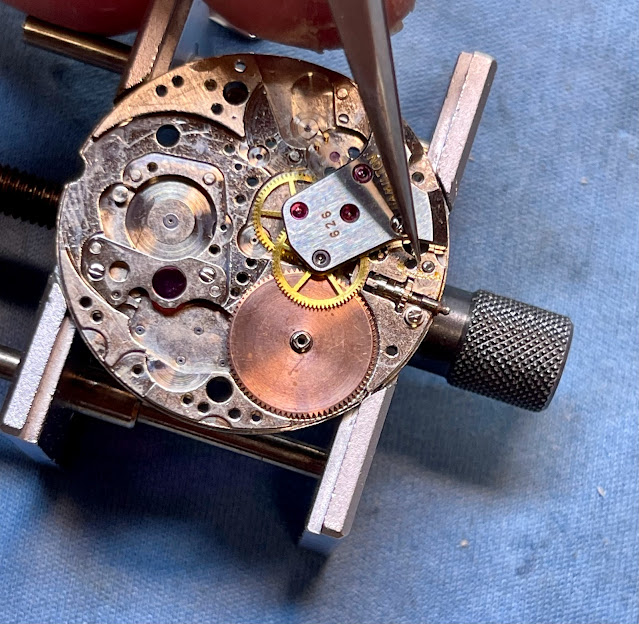 Last things off are the train wheels and I took another photo just to make sure I can recall how they go back together. 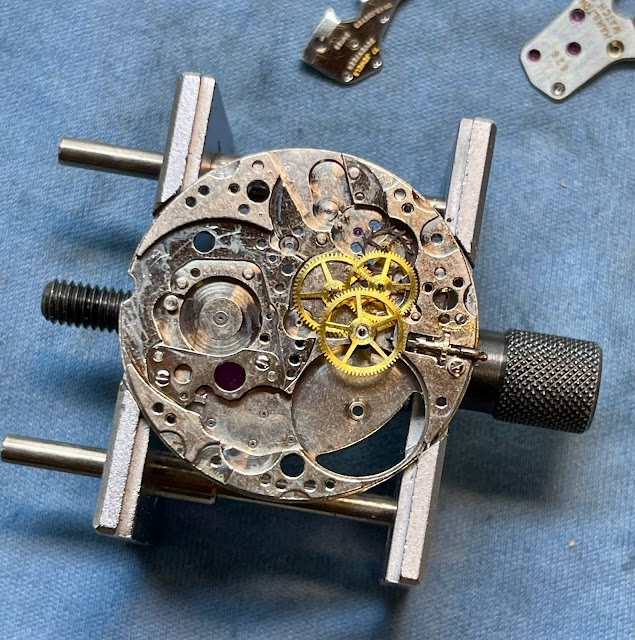 Everything get's thoroughly cleaned and dried before reassembly. 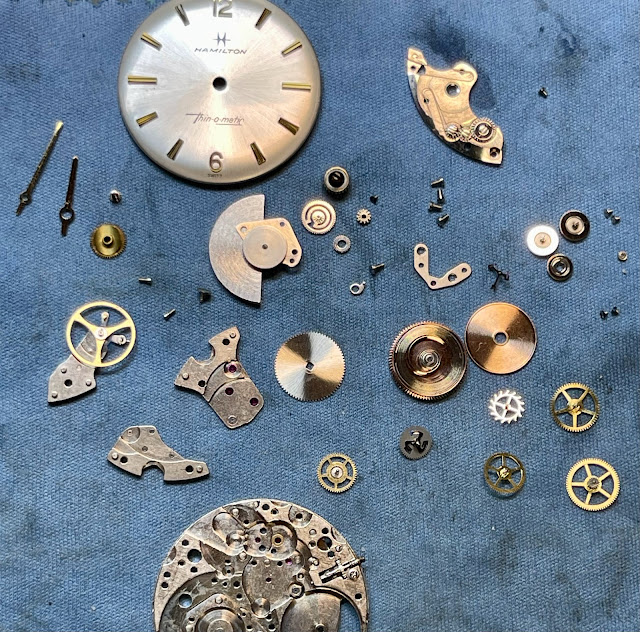 No dice on the broken screw so I'll have to rely on the remaining screw to keep the barrel bridge in place.  The movement is now reassembled, lubricated, and ticking away with a good motion.  I replaced the missing screw with a donor from a 629 movement (like the 626 but with a date complication), so the net number of screws present is the same. 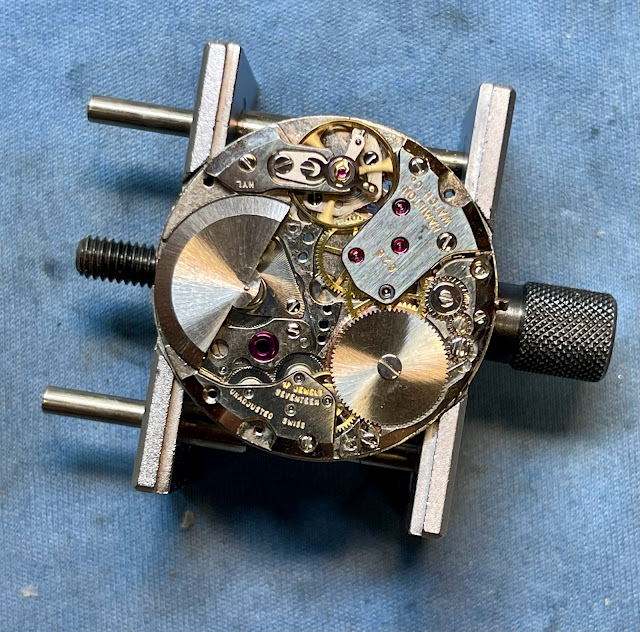 Nothing to complain about with this performance. 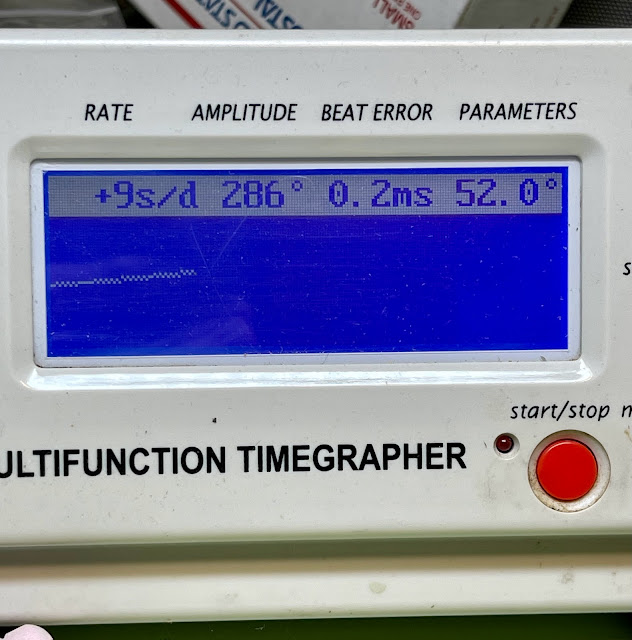 The movement is now running great, the outside of the watch is looking great, all that remains is to cross my fingers and hope the hands move as they should.  Based on the resistance I feel when I set the time, I think it will work out fine.  It's when you feel no resistance at all that you likely have a loose cannon pinion. 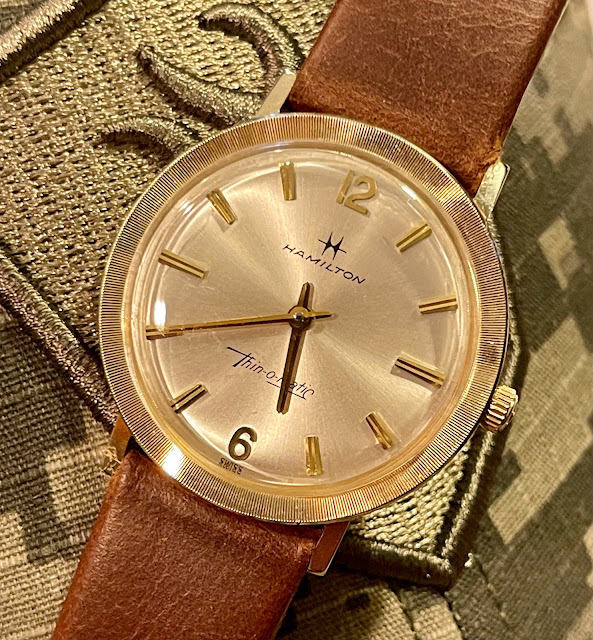