There must be at least 20 Hamilton watches named Sea-something and they came in all sorts of shapes and sizes and some even electric models.  You could put together quite a nice watch collection just by collecting the various different Sea-somethings with all the varieties of dial colors as well.

If you wanted to get started you could try the 1959 Sea Scape.  Just getting started with this model would require getting the black and the white dialed versions.  The Sea-Scape was produced for three years.  There's also a Sea Scape II and a Sea Scape III to keep you on the hunt. 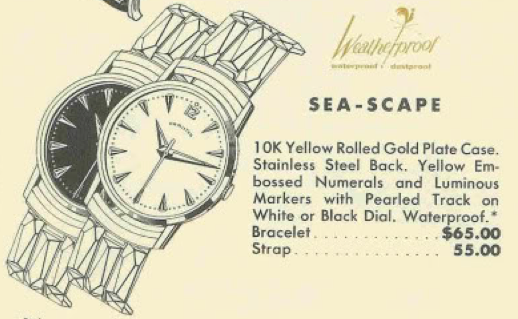 The Sea-Scape came in a 10K rolled gold plate case.  RGP cases don't have as much gold as gold filled and the RGP cases generally were used on the lower-tier of the Hamilton line up.

In order to keep a lower price point, the Sea Scape also uses a Swiss-made Hamilton 671 movement.  This 17 jewel sweep second movement was made by ETA and is also known as the ETA 1080 - which is helpful to know if you need a part for it.

I recently acquired a Sea-Scape project watch.  I'd show you the overhaul but I'm a little embarrassed to say that I couldn't get it to run right.  Yup that's right - sometimes a watch gets the best of me and this one really put me through the ringer.

Here's a shot of the Sea-Scape as received.  It was very "gunky" with a lot of crud in the nooks and crannies. 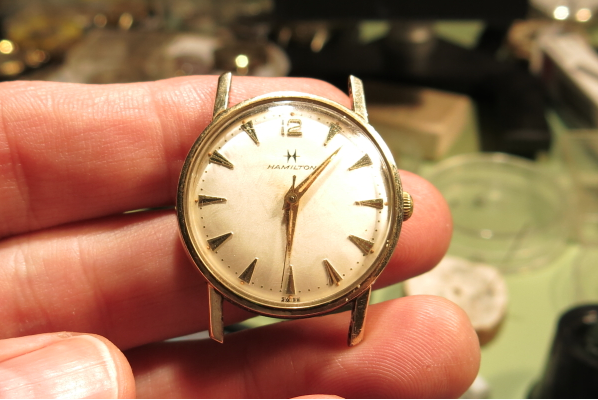 Here's a shot of the Hamilton 671 movement.  I completely disassembled it, cleaned it and oiled it but the hairspring is a little off center so it runs too fast. 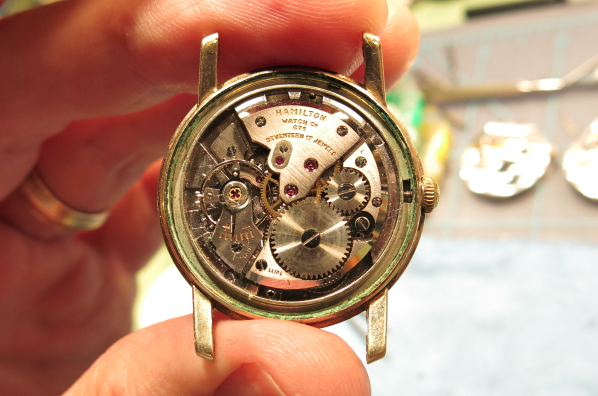 After fighting the darned thing for a few hours I threw in the towel.  It had beaten me.  I put it all back together and took an "after" photo so you'd see what it would look like all cleaned up with a fresh crystal. 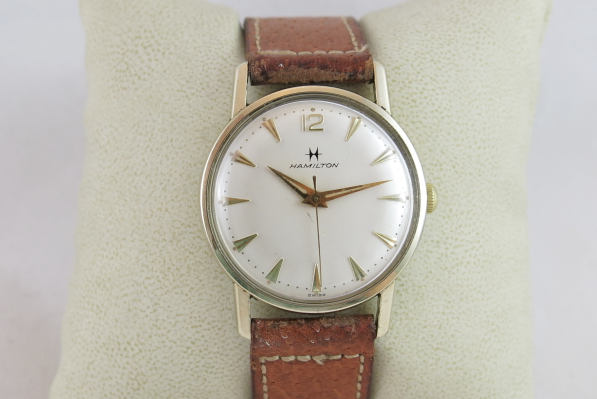 So what am I going to do now?  Well, hairsprings are tricky business.  If you think reassembling a watch is intimidating, then reshaping hairsprings should be nothing short of magical.  I'm just a hobbyist and I wouldn't dare call myself a watchmaker because watchmakers know how to work hairspring magic - and I don't.

That means I have two options... find a donor movement or send this to a watchmaker.   That's a pretty tough call because both are good options.  But in this case, I think I will go with the latter - as I have about 10 movements in similar a situation (running but poorly) and it would be good to get them all back in proper running order.
Posted by HandyDan at 5:11 PM