Hamilton's Automatic K-series of watches was introduced in 1954 and extended into 1961.  There are 58 different Automatic K-something models - and even more when you consider dial variations.

One of the K-watches that entered toward the end of the run was the Automatic K-414.  It was produced for only one year - 1960. 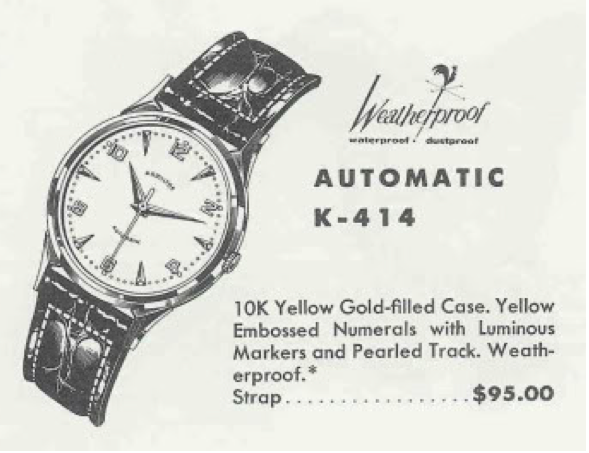 The K-414 came in a 10 yellow gold filled case with a white dial.  The dial has yellow embossed numerals and markers with a pearlized track.  The hands and dial are lumed as well.

If you look over in the menu on the right, I have posted a number of "Overhaul threads".  These show set-by-step how I disassemble and / or reassemble a movement - in case you ever wanted to try your hand at it.  I haven't done a 667 before so I'll show you in detail what's involved below.

I recently purchased a project K-414 from a local favorite shop.  One of the proprietors was kidding me about the great deal I got on the watch and told me when I left I would be "driving a getaway car".  Actually I paid a fair price ($50) considering the shape that it was in.  Although it was extremely dirty, it was running - but you never really know how well until you see it on a timer. 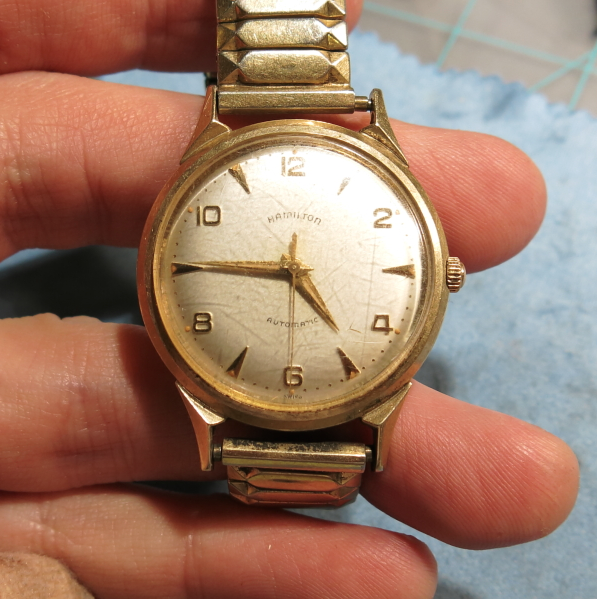 The back of a K-414 screws off.  These can be a real bear to get off sometimes, depending on the condition of the gasket inside.  Fortunately for me, I was able to open it without much difficulty. 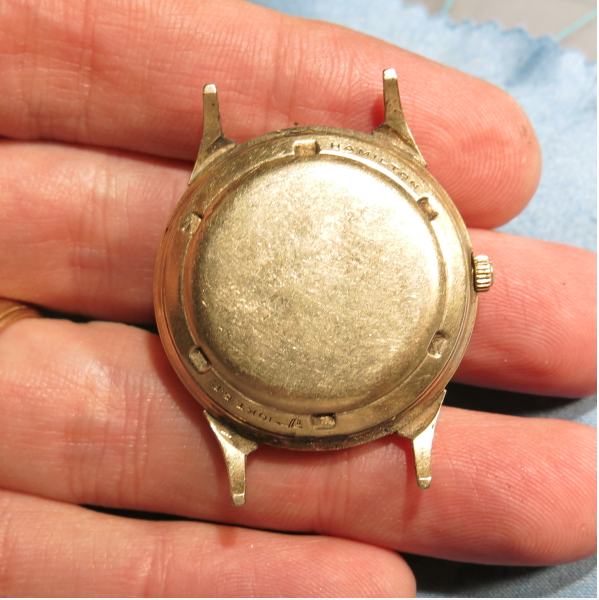 Wow, this movement is surprisingly clean. 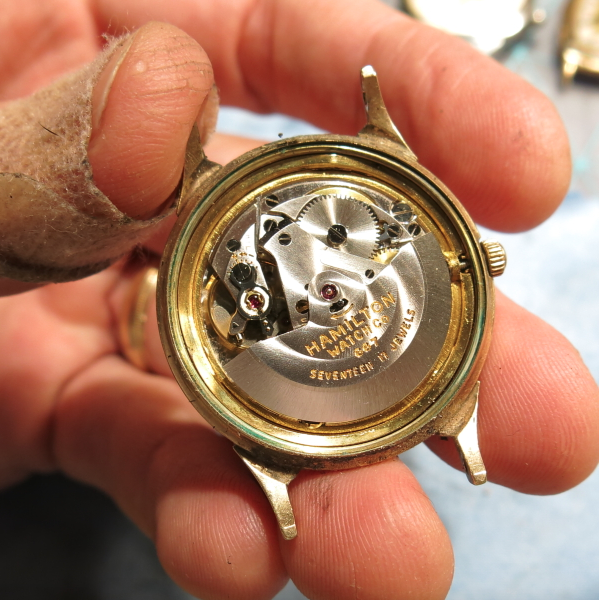 Once out from beneath the beat up crystal, the dial and hands actually look really nice.  The dial has a slight case of radium burn from the hands.  I'll remove the radium in my cleaner so that will put an end to that.

First to come off the movement are the hands, then the dial, and the hour wheel / cannon pinion below it. 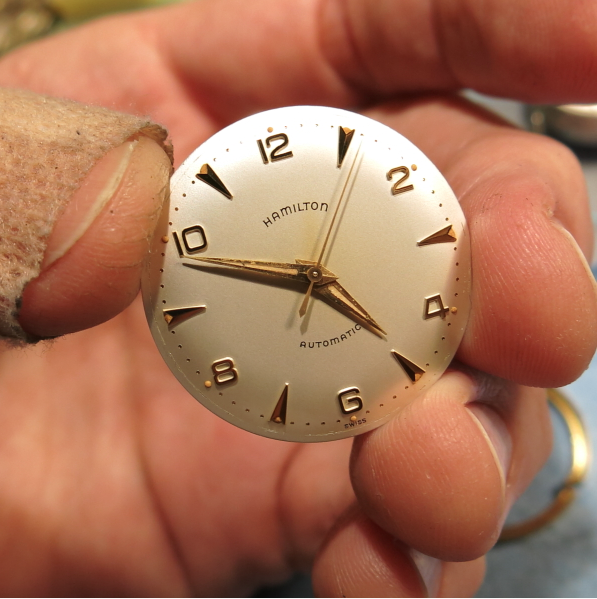 Switching to the back, like the 661, the rotor is really easy to remove from a 667.  You just "flip the switch" and rotate the rotor until it lifts right off.  That leaves the movement below with an exposed rotor carrier. 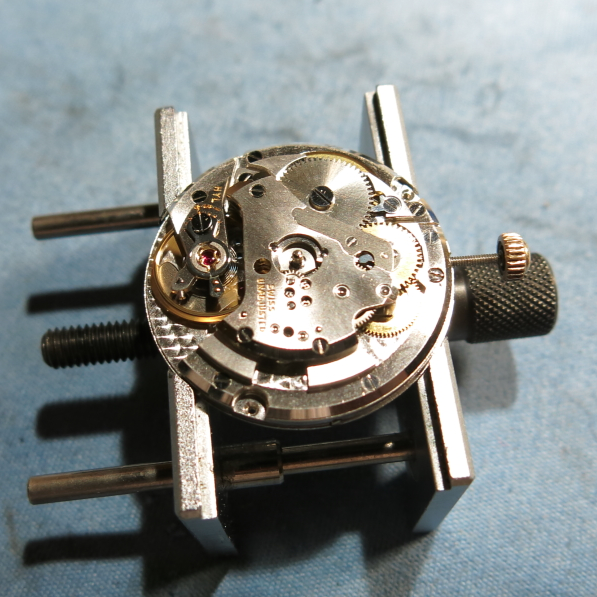 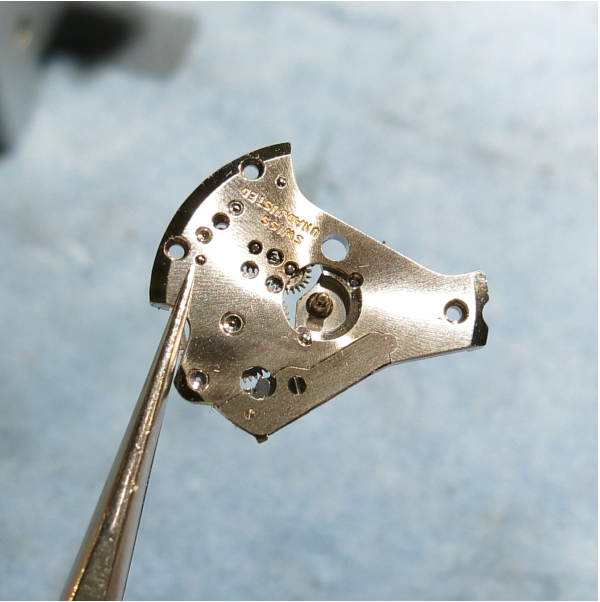 The other side of the rotor carrier shows the business-end of how the rotor transfers motion through the series of gears to the winding wheel on the movement. 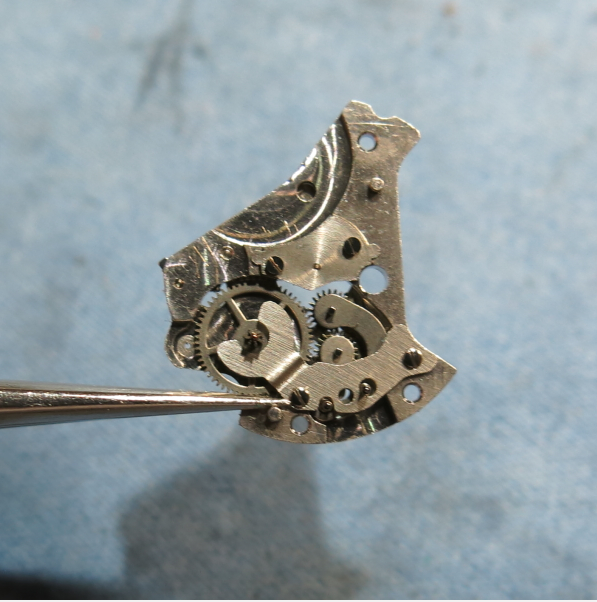 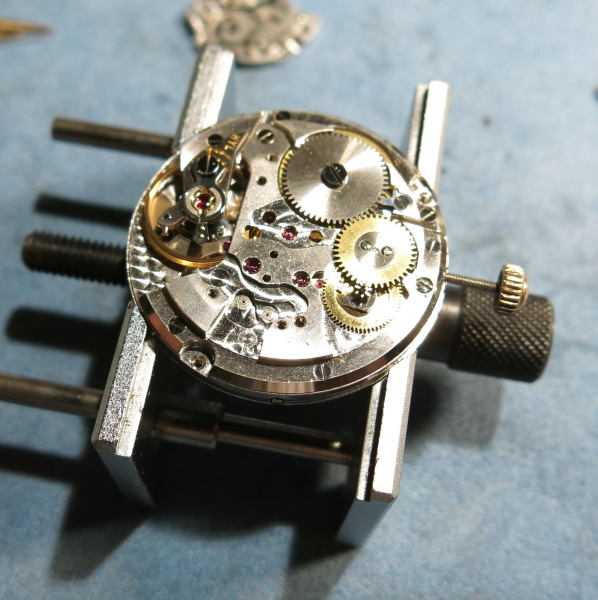 The barrel bridge is the next to come off.  Two screws hold it on.  The winding wheel has also been removed. 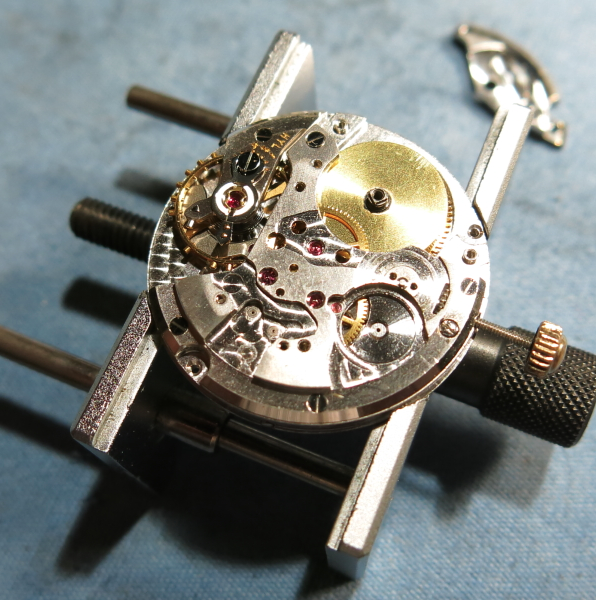 This movement has a large train bridge that is held on with four screws and encompasses the winding wheel too. 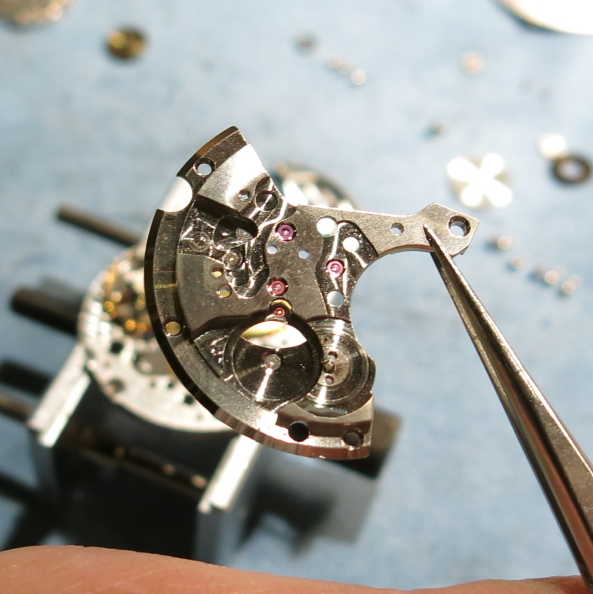 With the train bridge and barrel bridge removed you can see all the wheels in the watch.  The fourth wheel in the center drives the second hand.  The third wheel is next to it.   They can come out now.  I can also take off the balance assembly and the mainspring barrel. 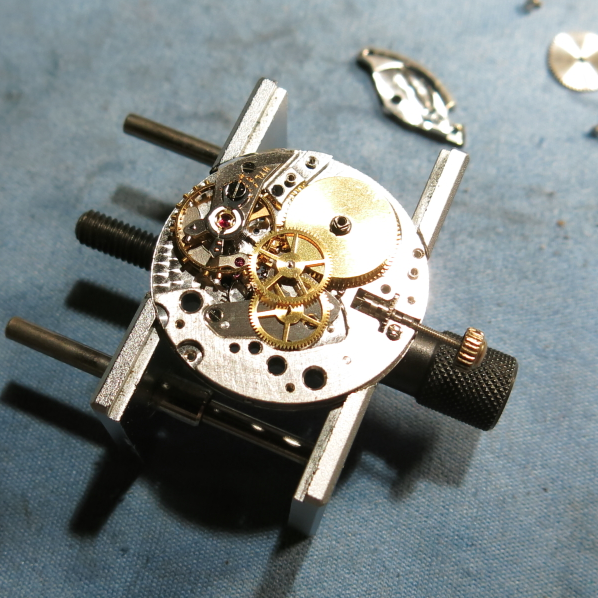 That leaves a bridge for the center wheel.  Two screws hold it on. 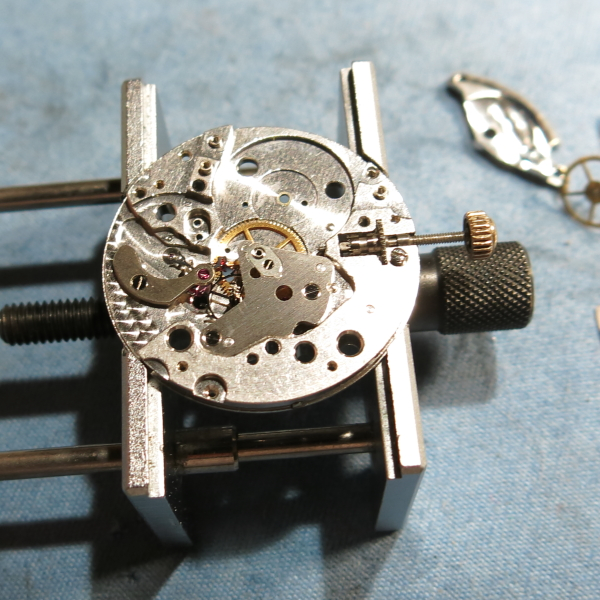 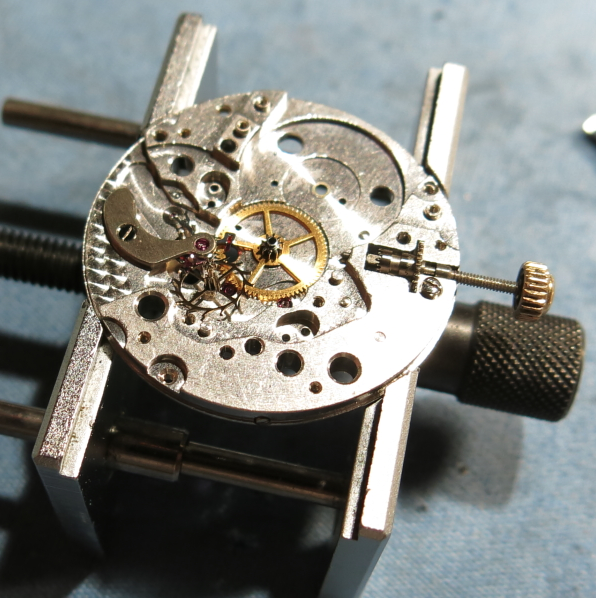 And the back of the movement is now clear of parts.  Nothing to it, right? 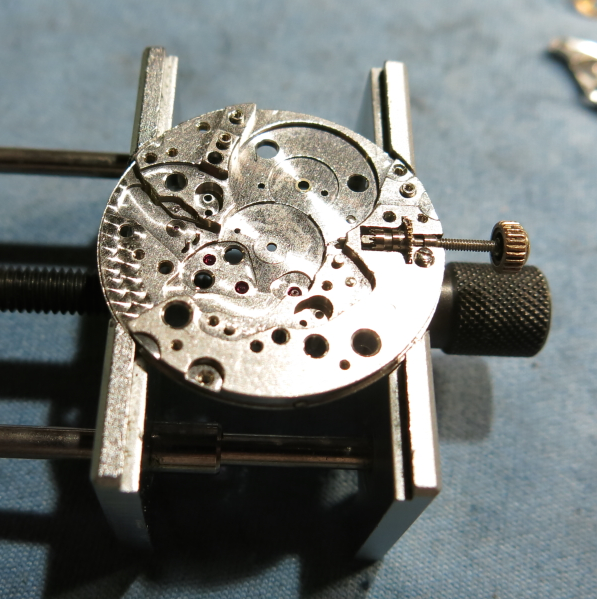 Everything gets cleaned, rinsed and set out to dry. 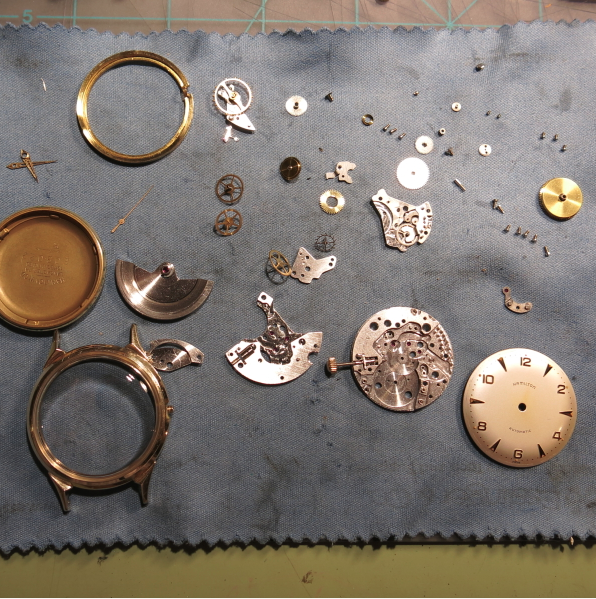 Normally the first part I put on is the pallet fork but for this movement I have found that it is easiest to put that on after I get the other wheels installed.  Installation is just the reverse of disassembly.  Getting all the wheels to line up can be a bugger on this movement so I find it best to tweak the parts with my tweezers from this angle - using the empty space left by the missing balance assembly. 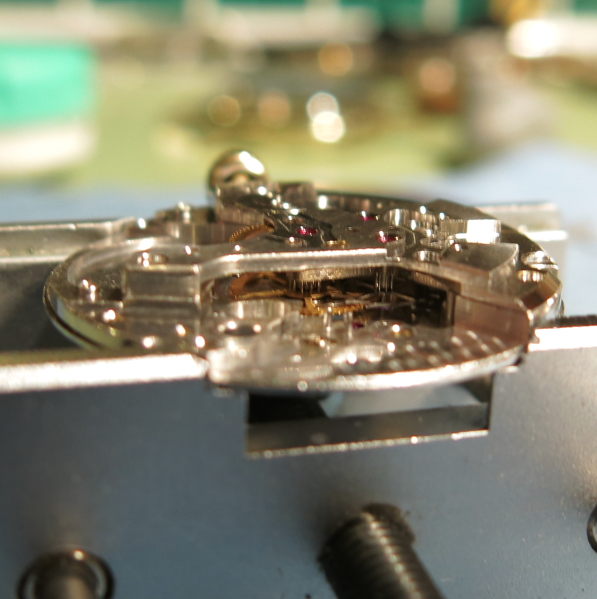 Now the pallet fork and it's bridge can be installed. 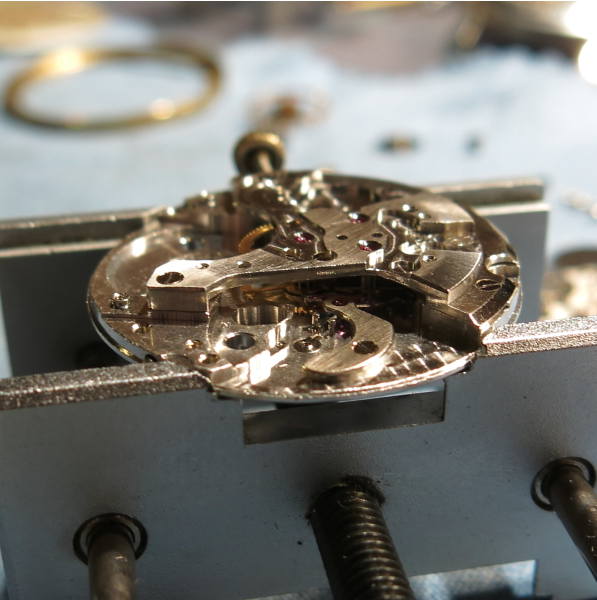 The mainspring barrel, barrel bridge, winding wheel and ratchet wheel go back on next.  Now I can wind the watch and put the balance assembly back on.  When it starts running I'll put it on the timer. 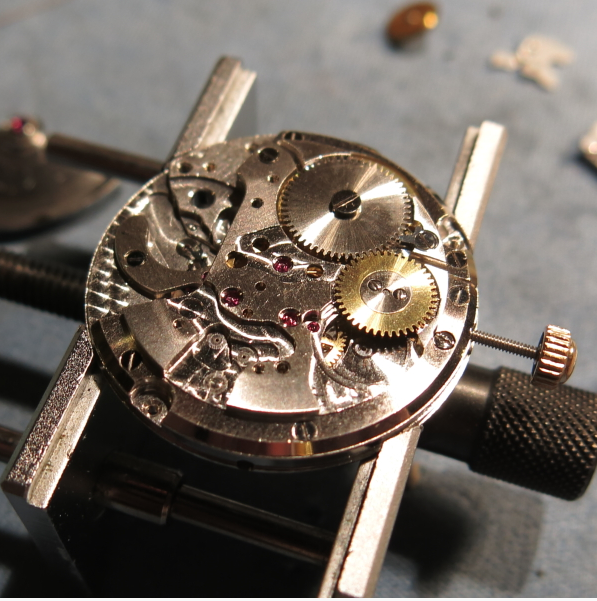 Well, that's not too shabby, 1 second fast per day with good amplitude and a low beat error… maybe my truck was a "getaway car" after all! 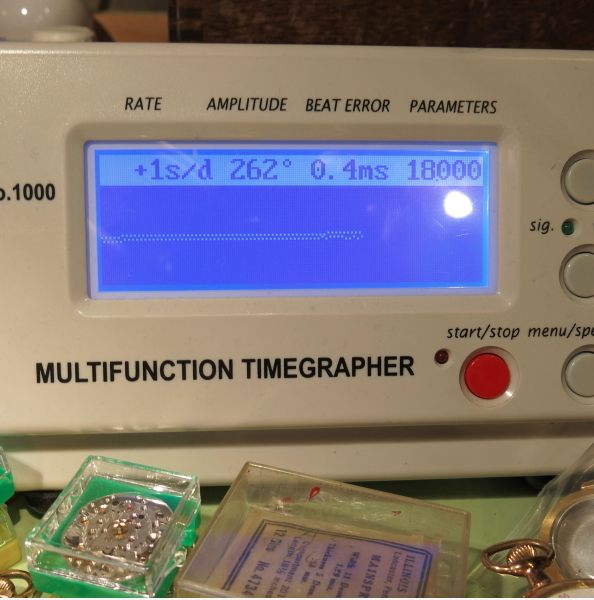 The dial and hands go on next and the movement is ready to go back in the case. 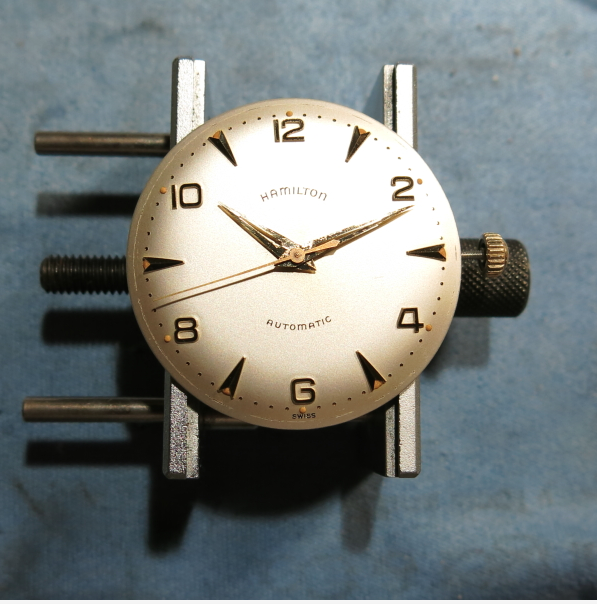 The movement is surrounded by a movement ring and secured with two screws. 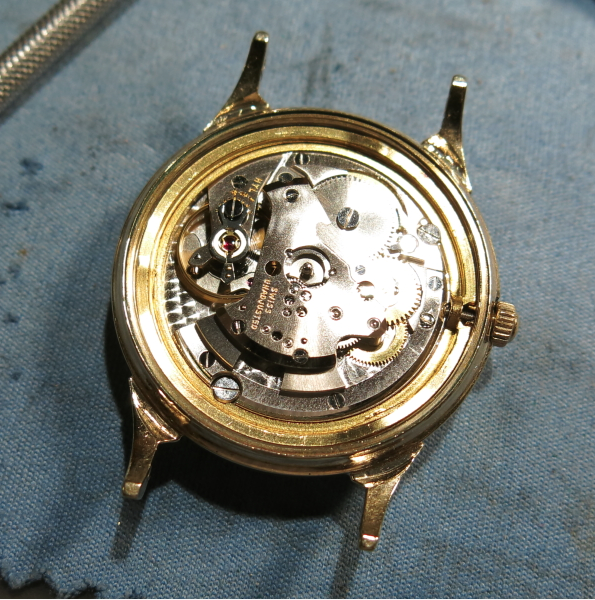 The rotor goes on last.  It's easier to put the rotor on last and not have it flopping around while the movement is outside the case. 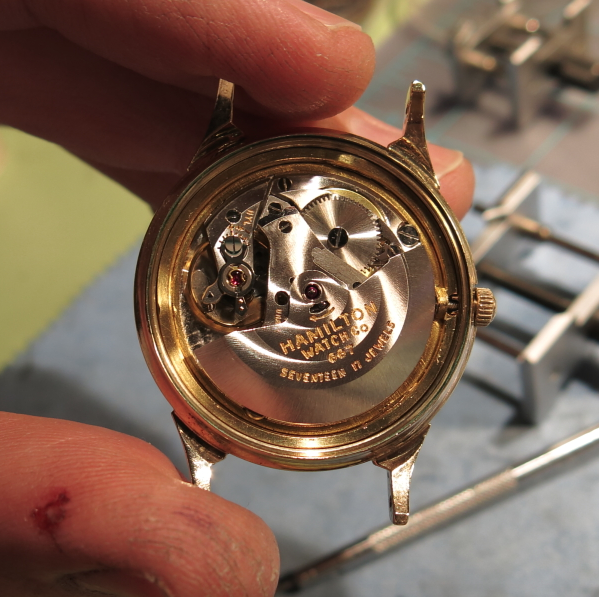 And with a polished case, new crystal and fresh lizard strap - this Automatic K-414 looks awesome!  I think I may need to wait a few weeks to go back to my favorite shop and let the heat die down… ha ha! 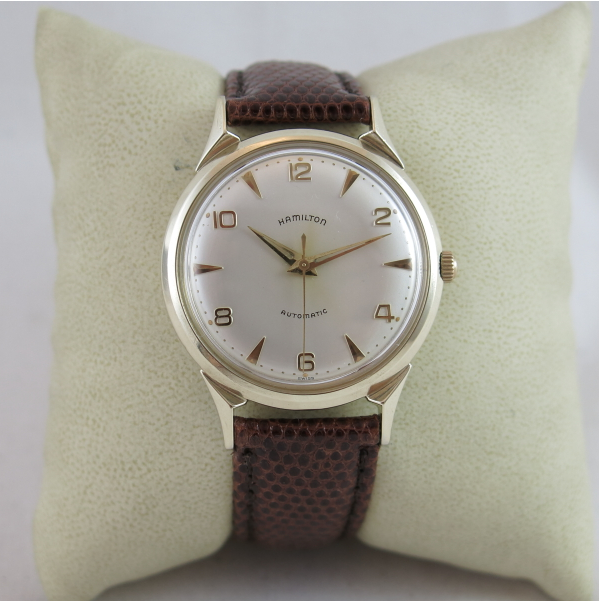