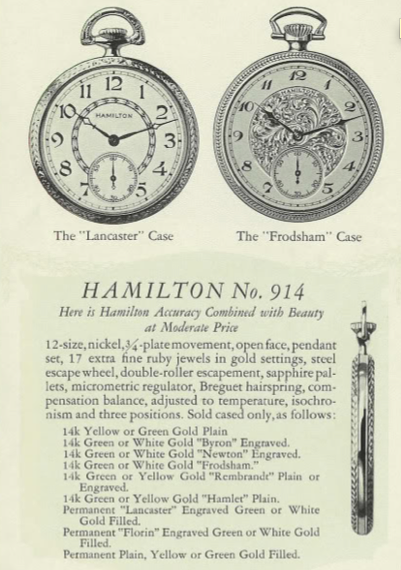 The 914's specs are very similar to the 916's - it's an open faced, pendant set, size 12 movement.  It has 17 ruby jewels set in solid gold chatons.  It has a micro metric regulator and the compensation balance is adjusted to temperature, isochronism and three positions.

Like the 916, several dial and case combinations were available directly from Hamilton.

I picked up a 914 a long time ago and it's been sitting on my bench with some other pocket watches, patiently awaiting it's turn at the spa.  It was in nice shape and actually has the same No. 14A dial as my recent 916.  Although it runs, it loses time so I suspect the cannon pinion will need to be tightened. 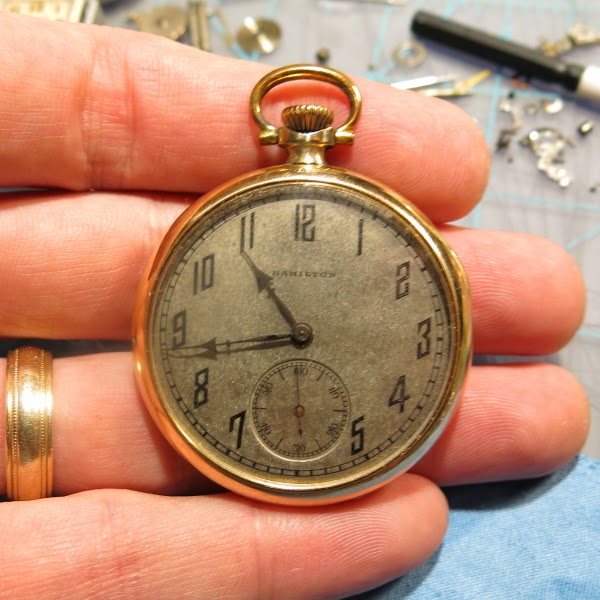 The movement is nicely damascened and is very attractive.  Hamilton took pride in making it's movements look as nice as they ran - which is an indication of the high quality they produced, since customers would rarely see the movement itself.

Based on the serial number, I can tell that this movement is from 1923, the last year of production of the 914. 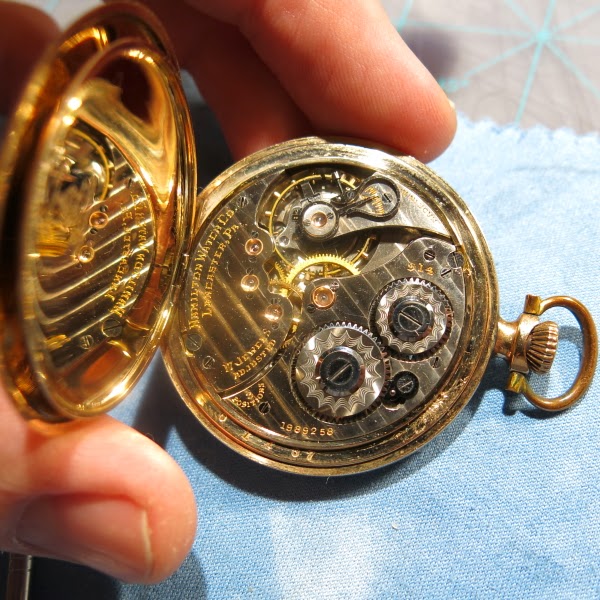 In order to remove the movement, first the front bezel is removed and then two case screws are pulled from opposing sides on the back of the watch.  Then movement will drop out the front. 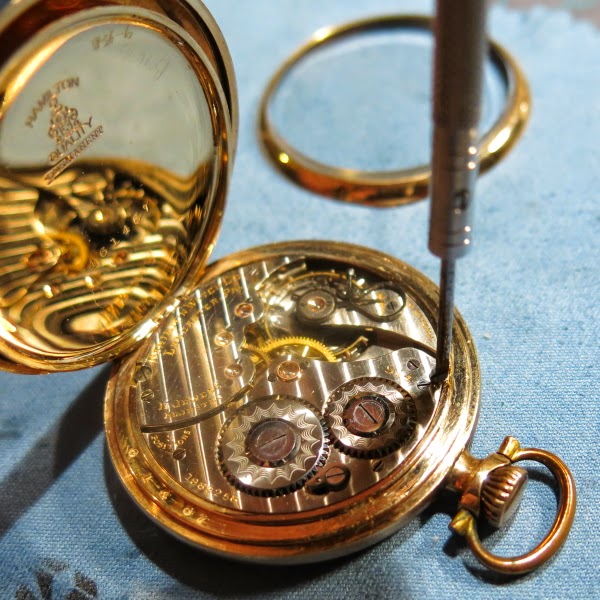 The movement has a general haze over it but it still sparkles a little.  Just wait until it's been cleaned! 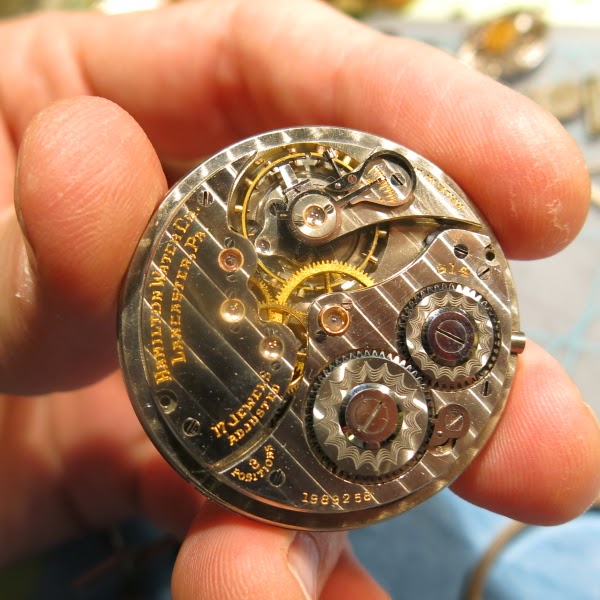 Once the hands are pulled, three dial foot screws need to be loosened and then the dial will come off. 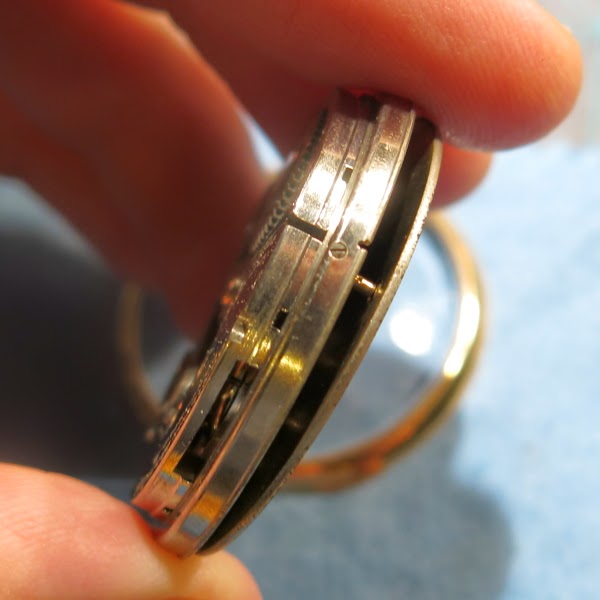 With the dial out of the way you can get a good glimpse of the springs that keep this "negative set" movement in the time setting position unless the stem is pushed in (to move the clutch wheel up and into the winding position).  Now I'll take off the hour wheel and cannon pinion in the center of the movement. 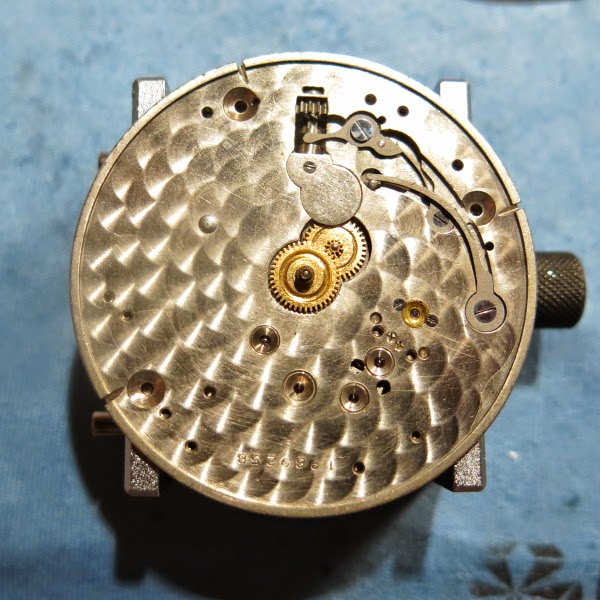 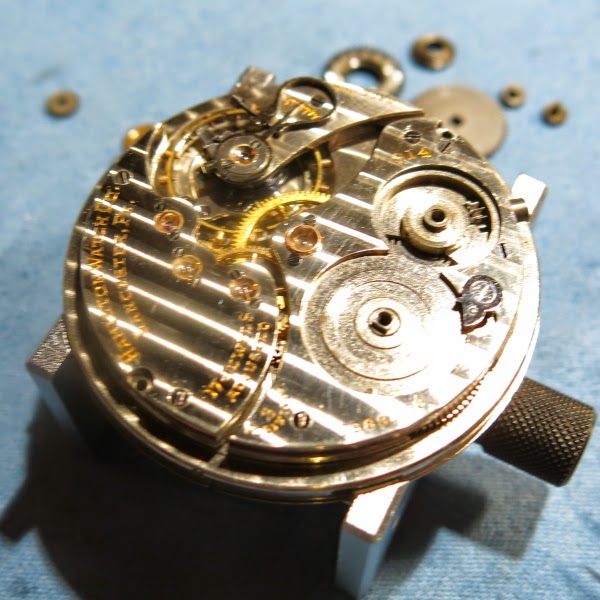 With the bridges out of the way, you can see the train.  Power is conducted from the larger mainspring barrel all the way through the wheels until it's released tick-by-tick through the balance. 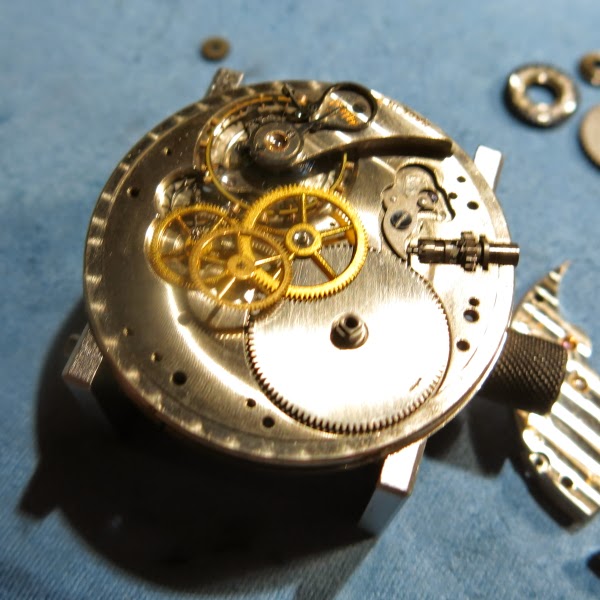 The balance wheel is connected to the balance cock at the hair spring stud.  Two screws hold a plate over the stud to secure it.  Loosening the screws allow the stud to drop out and separate the two parts. 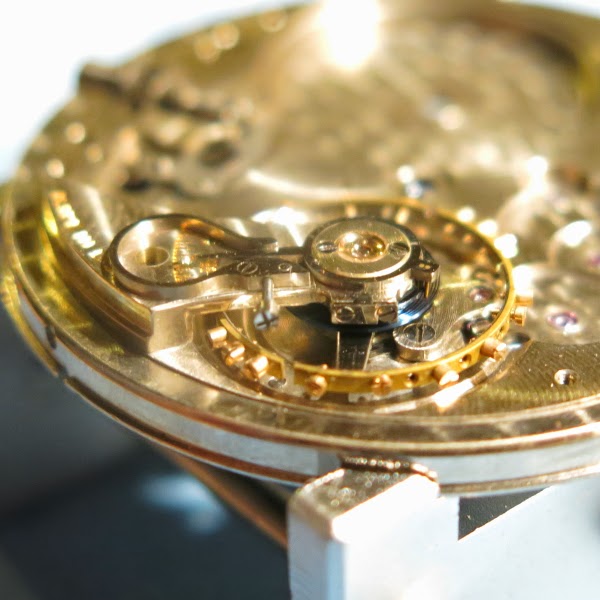 With the balance out of the way, the only thing left is the pallet fork.  This little anchor-shaped part retains all of power of the mainspring.  Without it all the wheels would whirr away the power of a full wind in a matter of seconds, instead of a matter of 40+ hours. 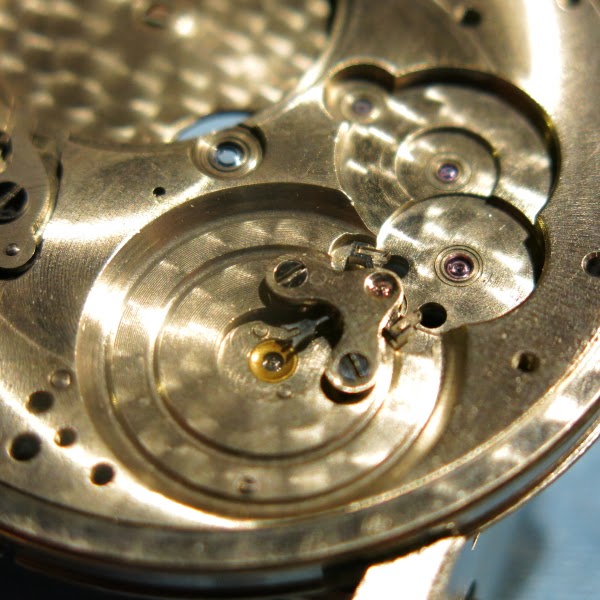 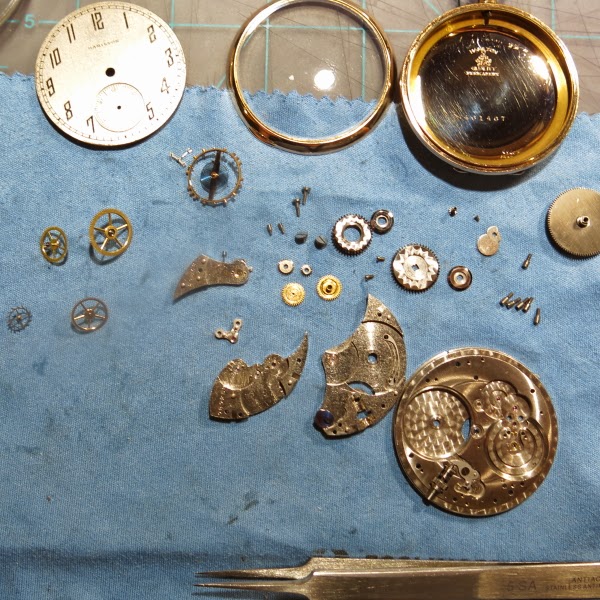 The now reassembled watch is ticking away with just a couple of turns to the ratchet wheel.  I will give the movement a full winding when I reinstall it in the case. 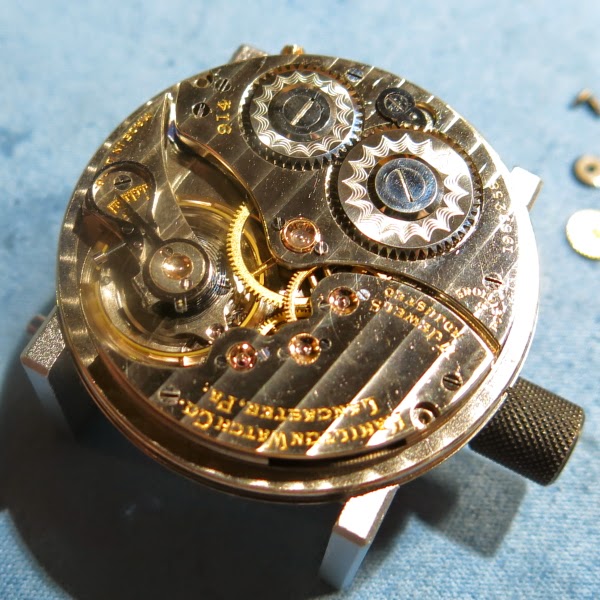 Here you can see the setting wheels that transmit the turning of the crown and stem through the clutch wheel until ultimately turning the cannon pinion and hour wheel - thus setting the time.  As the watch runs, not only do the hands turn, but all of these wheels do too.  So they need to be lubricated to reduce friction and wear, just like all of the other wheels. 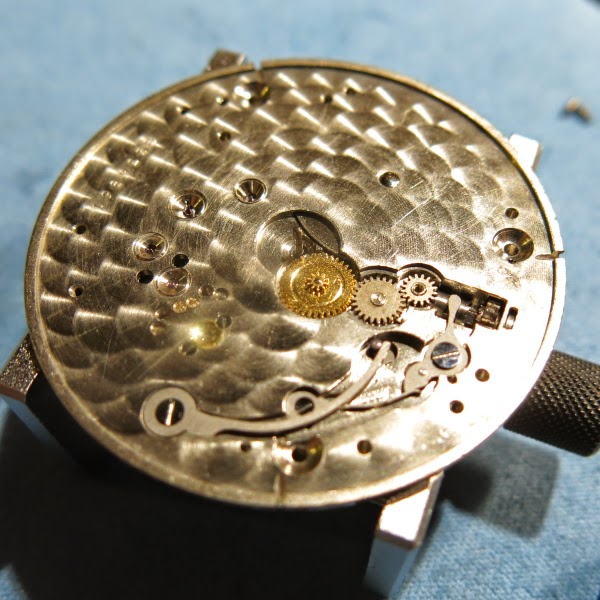 Now the cannon pinion and hour wheel are back in place, as well as the cover over the setting wheels.  All that's left to be reinstalled is the dial and hands. 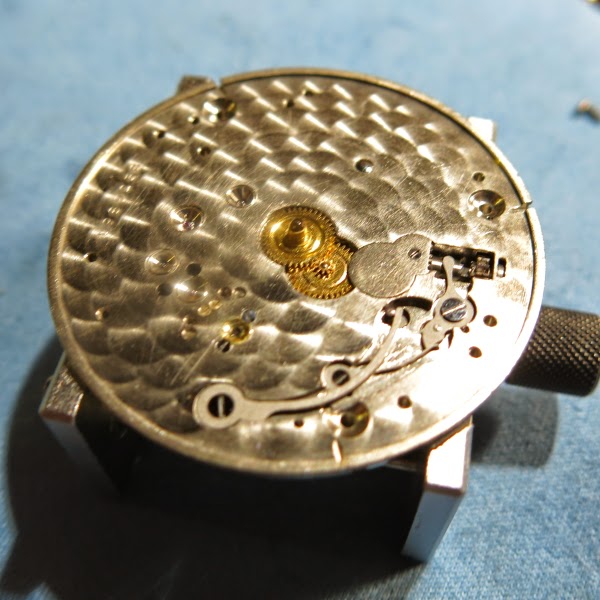 With a full-wind on the movement, it's off to the timer.  It's running a little fast but otherwise it's in good shape. 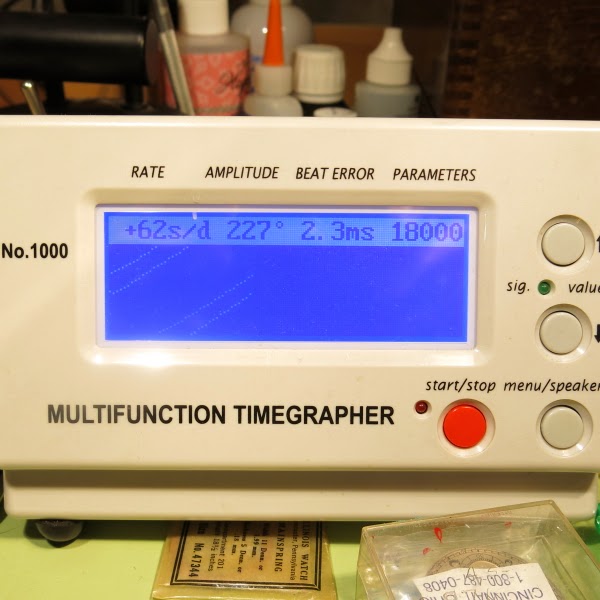 A couple of turns to the micro metric regulator screw and the beat rate is brought right in line.  There's nothing too shabby with this performance. 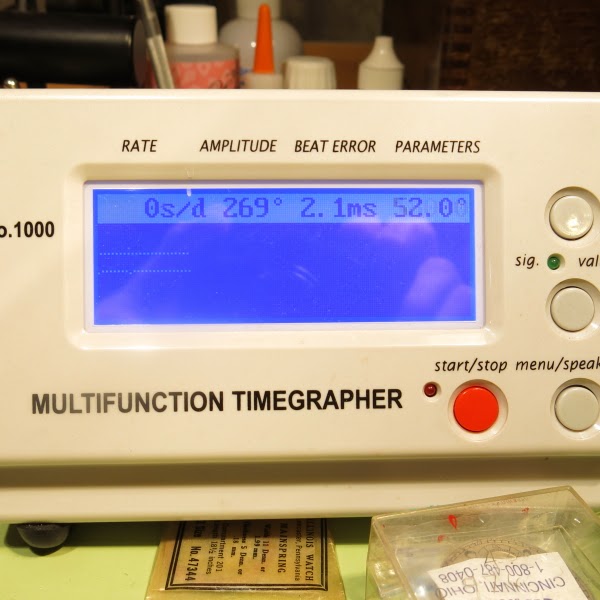 And here's the finished project all polished up.  It's a nice looking dress watch, no? 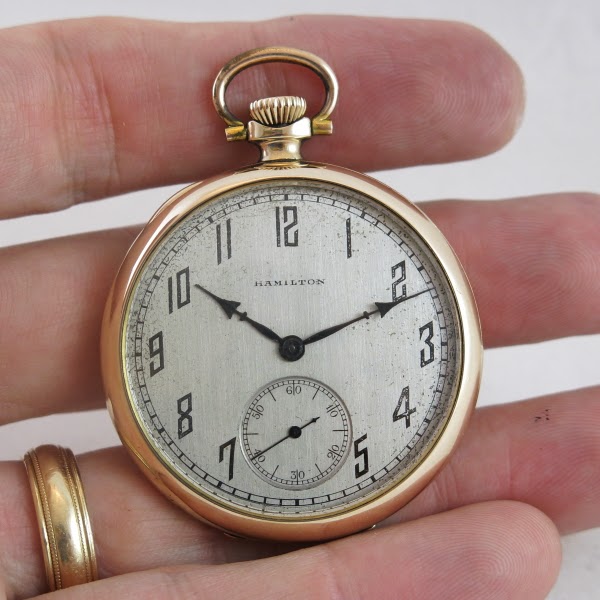 The initials engraved on the case back are very well done but I have no idea what they are. 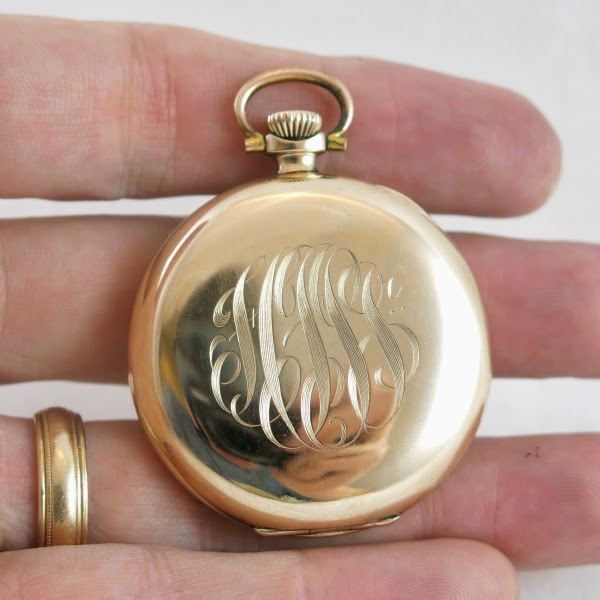 The inside dust cover is as pretty as the outside and says Hamilton Watch Co. Lancaster Pa. 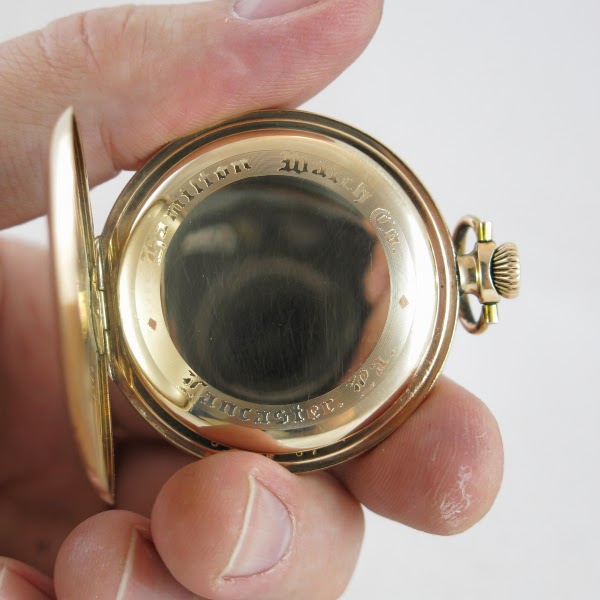 And here's a final shot of the movement - it sparkles brilliantly now that it's been cleaned.  Look at that blurred balance wheel spin! 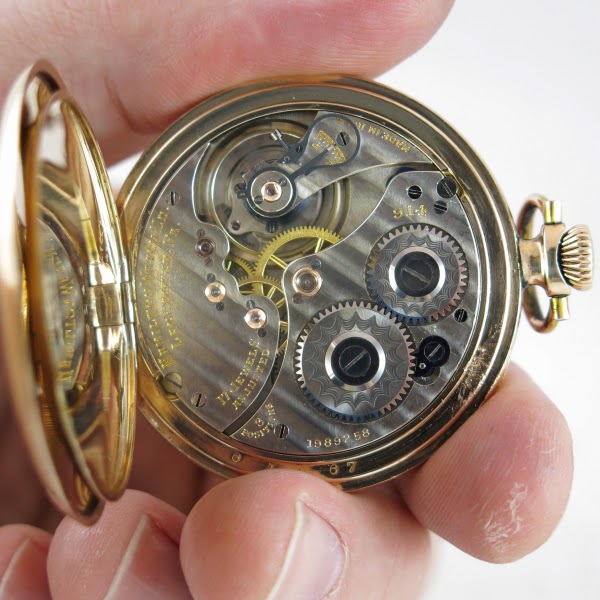