Hamilton made a variety of pocket watches back in the day.   In fact, during the first quarter of the last century, there were about two dozen different pocket watch movements.

However, by 1941, only two "railroad approved" pocket watches were still being produced... the 21 jewel 992B and the superior 23 jewel 950B.  Both movement grades were offered in different cases so collectors will look for both the type of movement as well as the case it's presented in.

The 950B is a striking design and looks as great as it runs.   It's very popular with railroad collectors and normally commands a healthy premium over a 992B model. 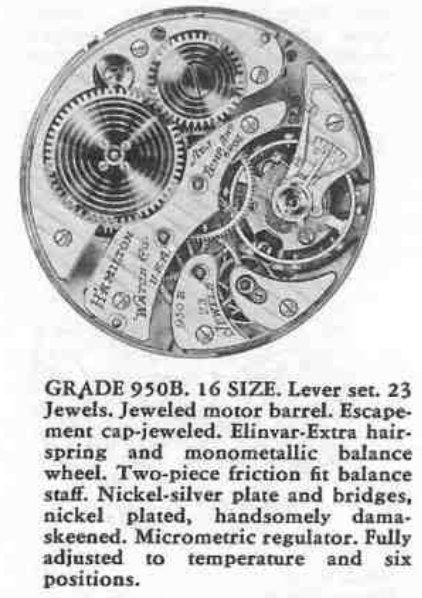 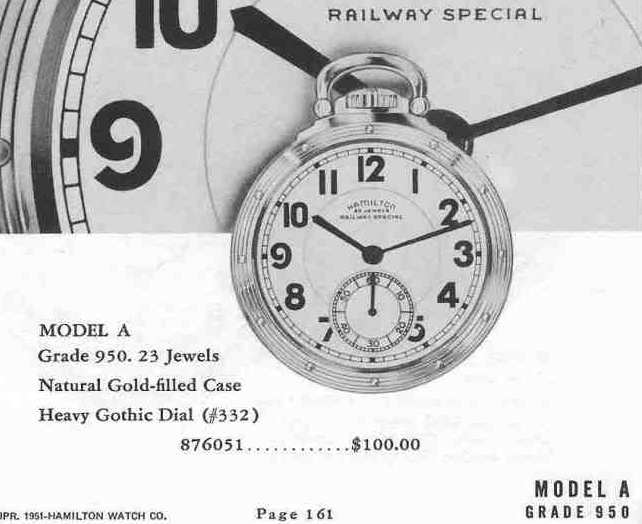 The Model A case came in 10K gold filled.  The other case available in 1951 was the Model No. 2 "Bar over Crown" case and that came in both solid gold or gold filled.

The 950B was a replacement for the original 23 jewel 950 that was produced for almost 40 years prior to 1941.  The major differences between the 950 and 950B are in the balance design, hairspring, cap jewels and the mainspring barrel... otherwise the two movements are very similar in appearance.

One of the details that makes the 950B such a high-end movement is the solid gold train wheels and rhodium plating on the main plate and bridges.

I've envied the 950B for a long time but they're very expensive and I don't tend to use pocket watches.  There are a lot of wrist watches out there that are just as tempting and I normally go for those before a pocket watch.  However, if you were going to only have one pocket watch, the 950B should be a top of the list.

As fate would have it, I came across a nice 950B and the price was right so I jumped on it.  As received, it was running but I could tell that it hadn't been serviced in a while.  The enamel dial has a couple of minor hairline cracks - that can dramatically impact the value of a watch but they don't bother me as much as other dial damage like chips or repairs do.

The 950B traditionally came with a heavy gothic dial and baton style hands, as mine does below. 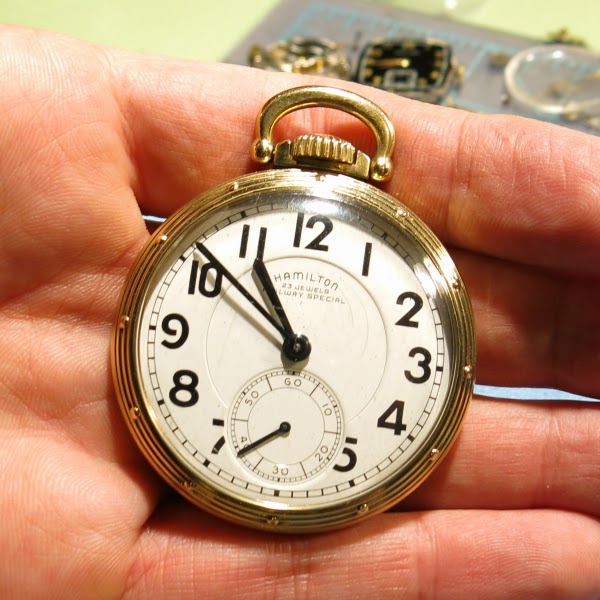 There's a little bit of a haze to the damascened finish but, even with that, the movement looks bright and shiny. 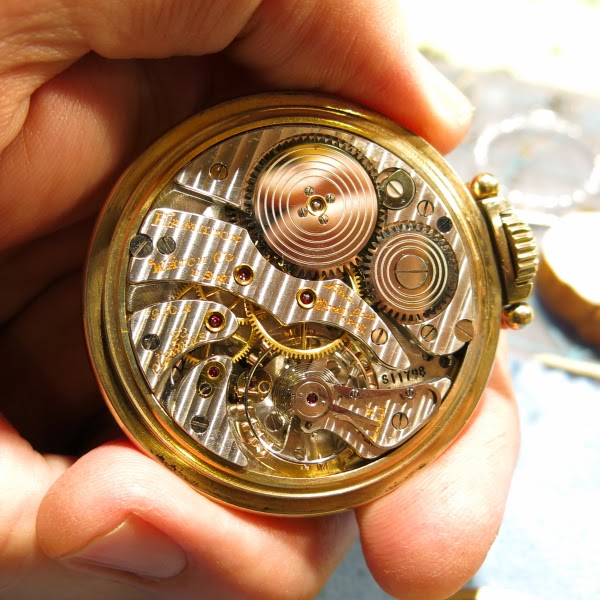 The bezel unscrews to reveal the lever at 1:00.  You need to slide the lever out to the setting position (as shown) in order to set the time.  Being "lever set" was one of the requirements for getting railroad approved. 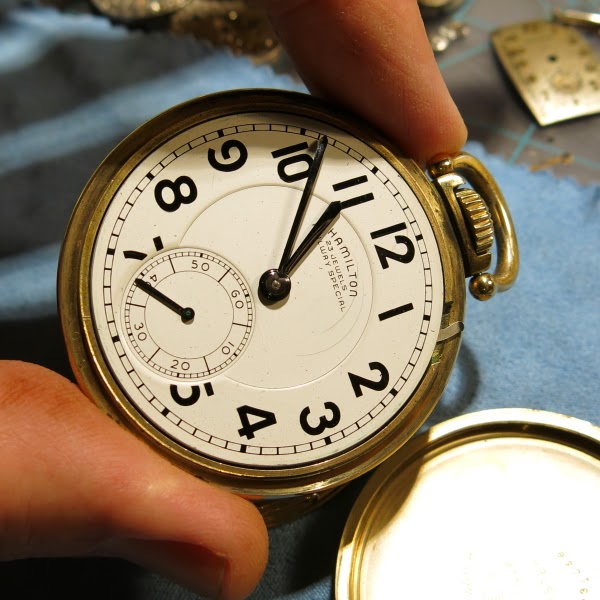 Once the two case screws are removed from the back, the movement comes right out the front.  Great care has to be taken to make sure I don't fat-finger the movement and drop it on the balance side - as that would break the balance staff.  Three dial foot screws secure the dial to the main plate.  Once they're loosened the dial will lift straight off, and take the second hand off with it. 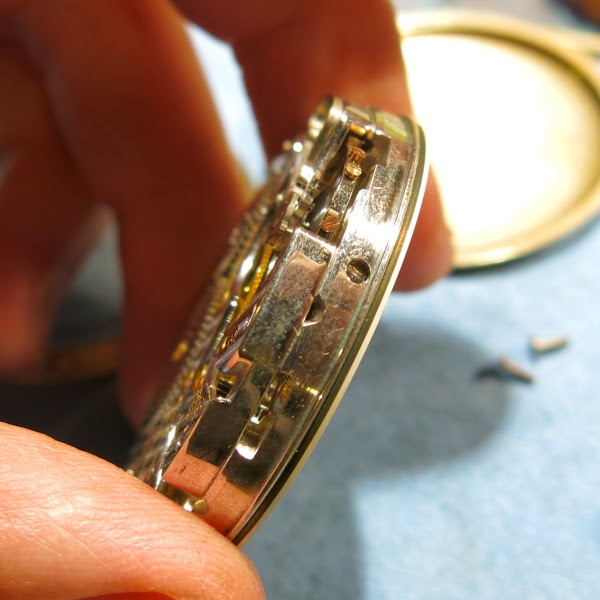 Another sign that the movement hasn't been overhauled recently is the light coat of verdigris on the dial washer.  The green oxidation ring is caused by the two dissimilar metals of the washer and the dial touching for a long time. 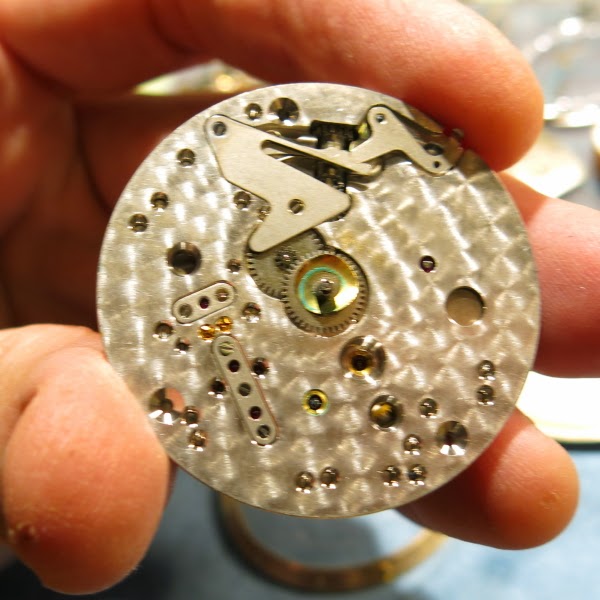 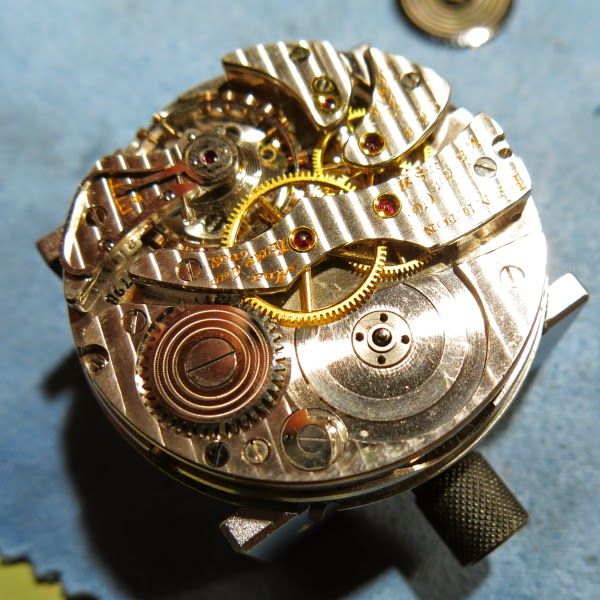 When the smaller winding wheel is removed, you can see how it connects to the winding pinion that is under the barrel bridge (which has been removed). 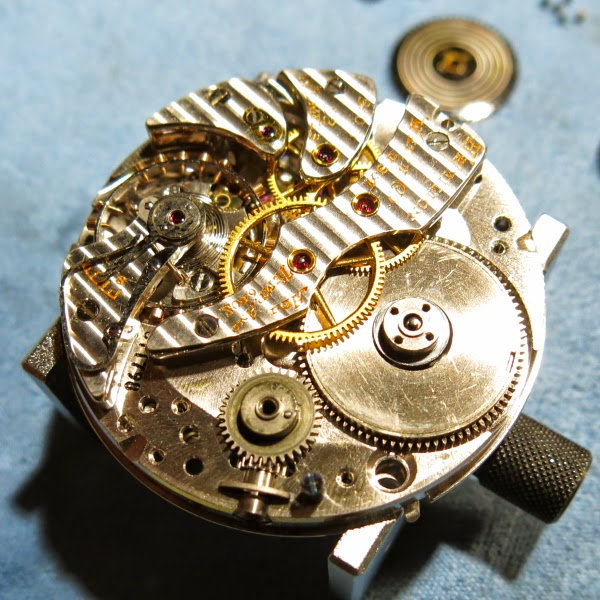 Removing the two train bridges is as easy as unscrewing four screws.  The bridges just lift off to reveal the solid gold center wheel, 3rd wheel and 4th wheel.  The escape wheel is steel. 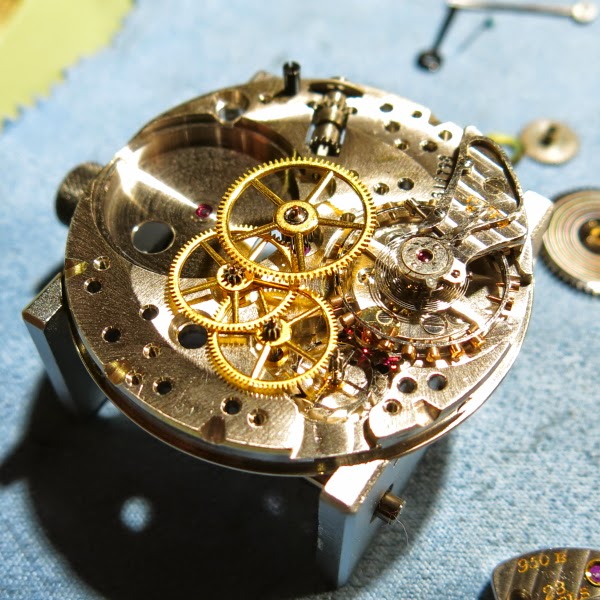 With the balance out of the way, all that is left to come out is the pallet fork, which is held in place by it's bridge.  You can see there is a cap jewel over the pallet fork's lower pivot.  Both pivots on the escape wheel, pallet fork and balance staff have cap jewels, top and bottom. 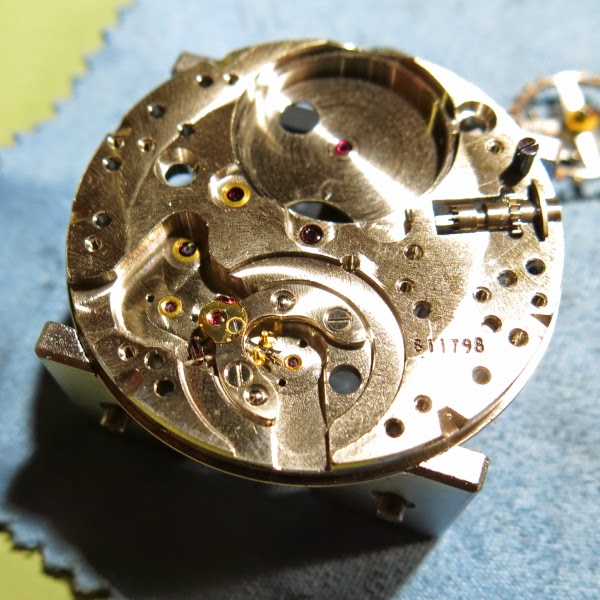 Pretty much everything has been taken off now and is ready to be cleaned. 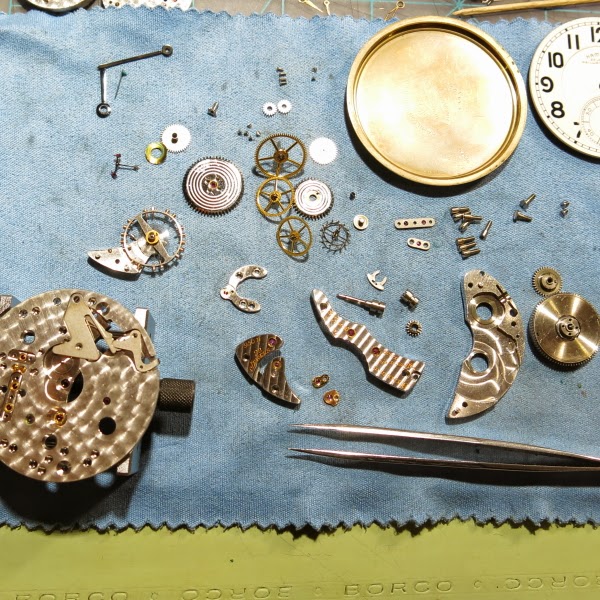 A nice white alloy mainspring will give the watch plenty of run time. 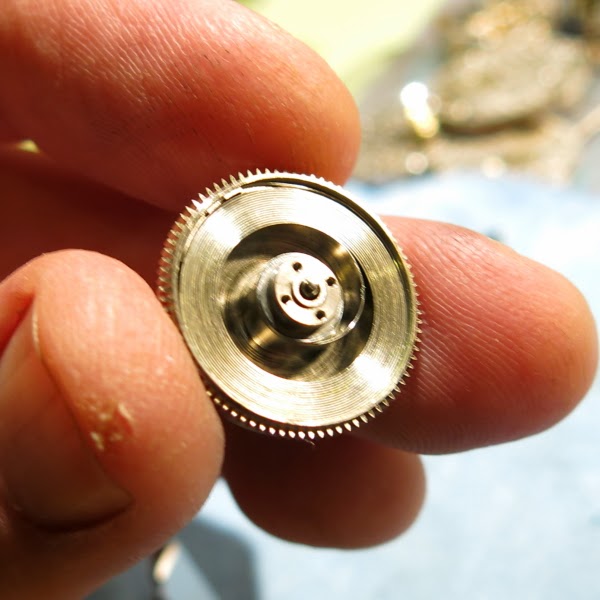 All the parts have been cleaned, dried and are ready to be reassembled.  They are noticeably brighter than their "before" state.  Fresh oil will be applied to each of the bearing surfaces so the watch will run as close to friction-free as possible. 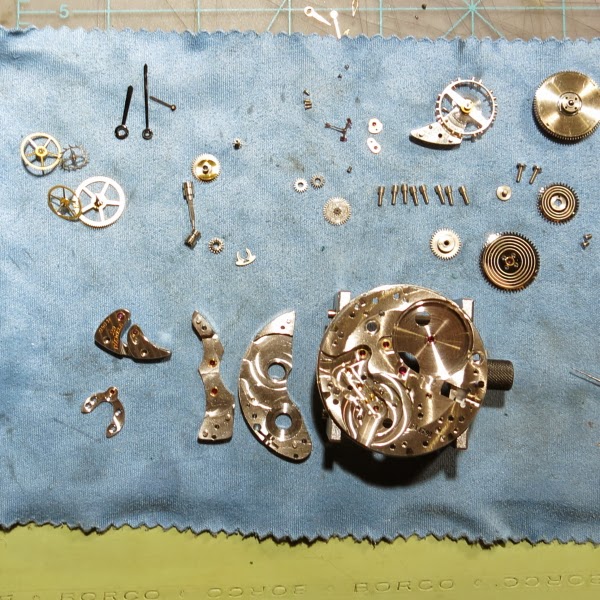 The running movement goes onto the timer.  A 16 size pocket watch movement is way bigger than the usual 6/0, 8/0 and 140/0 movements I typically work on... but the timer accommodates it just the same. 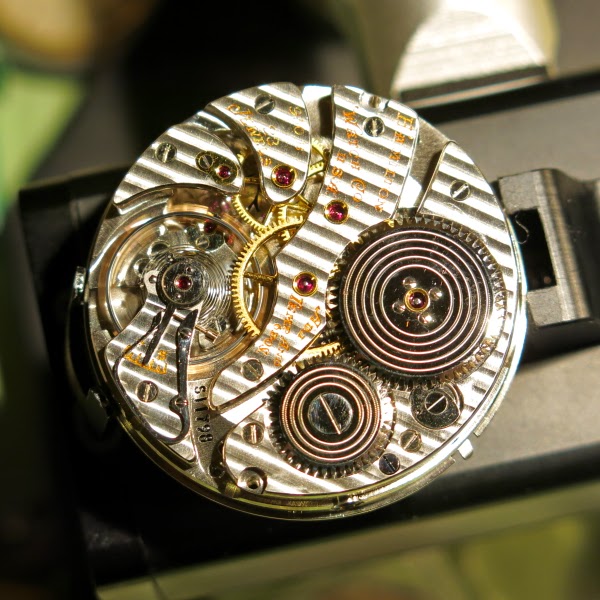 I took my photo before the timer was able to calculate the amplitude but the beat rate is a little slow and the beat error is on the high side of acceptable. 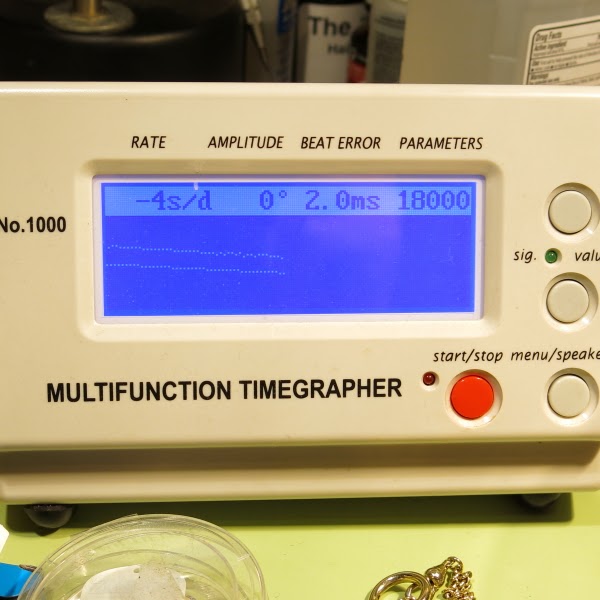 A little tweaking to the micro-regulator speeds up the watch slightly.  The amplitude is a vigorous 310 degrees.  The beat error could be reduced if I took the balance off and tweaked the hairspring collet the right direction but, to be honest, I'd be tempting fate and the benefit gained by a lower beat error is way less than the risk of potentially goofing up the hairspring.  It's not like I'm planning on running a railroad anytime soon. 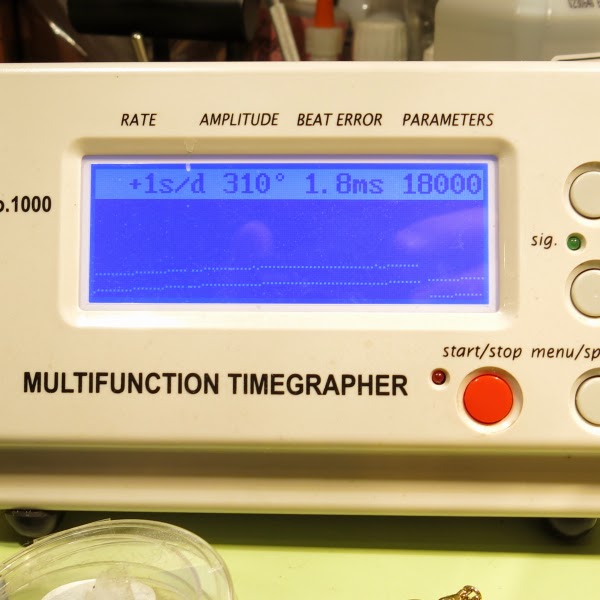 With the dial and hands reinstalled and everything put back into the freshly polished case, this 1951 Model A 950B is a fine looking watch.  I may keep my eye out for a defect-free dial but otherwise this watch looks fantastic to my eye. 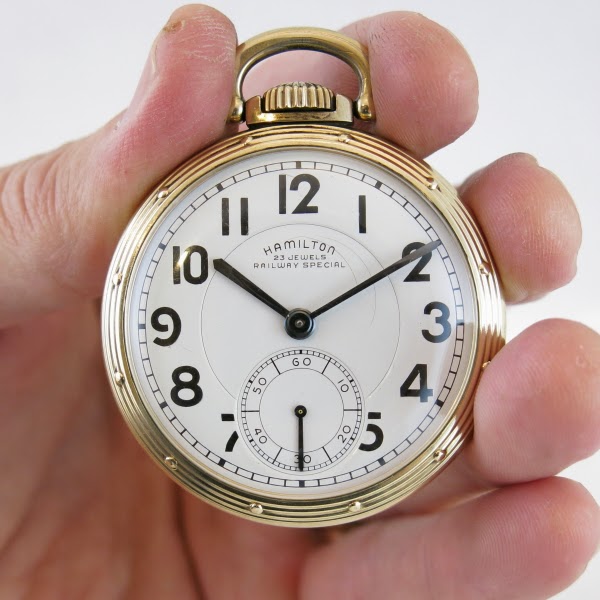 It's too bad I have to cover up the movement with a solid case back.  There's something very satisfying about looking at a running movement after having taken it fully apart, cleaned it and reassembled it. 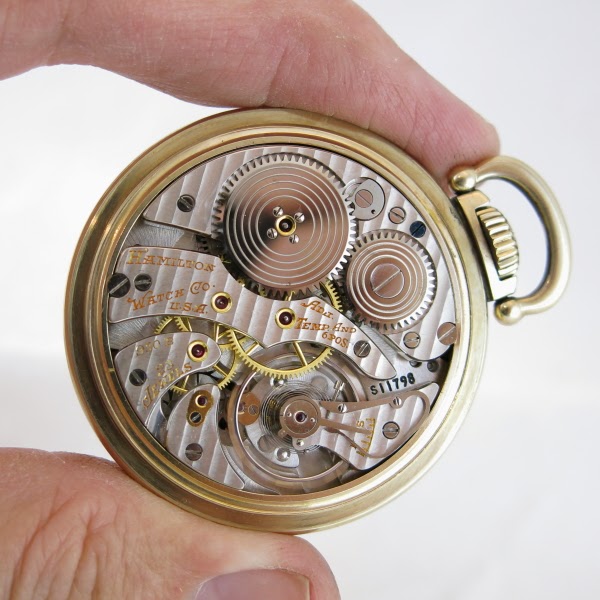