Hamilton merged / acquired a couple of Swiss manufactures in the 1960's... Huguenin and Buren.  The sleek looking H logo on 1960's watches is thanks to Huguenin, which also used that logo.  And Buren contributed the micro-rotor movements used in Thin-o-matics.  Buren also provided the super thin movements used in the Thinline models.

A good example of a classic Thinline is the 6508.  It was introduced in 1968 and produced for two years. 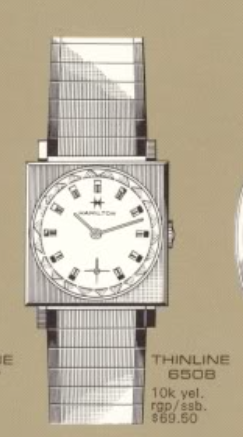 The Thinline models used a very similar numbering scheme as the automatic models.  The first digit of the model number denotes the case material... a 2 is solid 14K, 4 is gold filled, 5 is stainless steel and 6 is rolled gold plate.  In addition, when the second digit is a 5, the case back is stainless.

So you know that the 6508 has a 10K RGP bezel with a stainless steel back.  The bezel has a brushed finish and I'm sure it looked interesting when it was presented on it's matching bracelet.

Tucked inside the case is a Hamilton 637 movement.  This 17 jewel Buren-based grade is super-thin, as you will see in the photos below.  The crystal is a faceted design - and can be somewhat tricky to replace if you're looking for an exact match.

I've had my Thinline 6508 for a few years.  The dial lost it's lacquer finish so I sent it out to be refinished.  Now that it's back, I'll give the movement and overhaul.

I decided to get the dial refinished because I had lost most of the seconds cross-hairs when the lacquer pealed off.  By the way, you can see the Huguenin "H" logo I mentioned above. 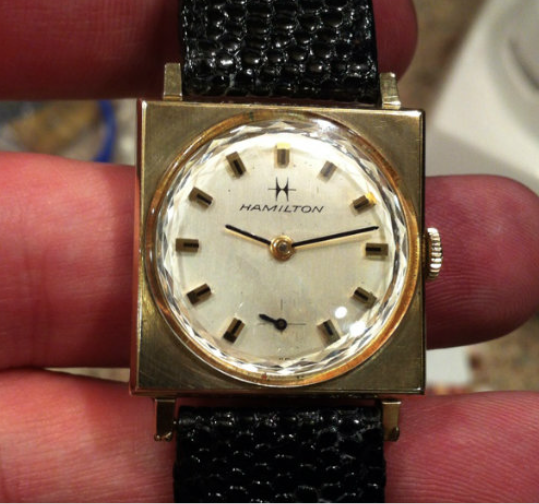 My refinished dial turned out pretty good.  International Dial matched the H and Hamilton fonts perfectly but my cross hair seconds register appears to be just a smidge long.  C'est la vie - it could be a lot worse.  The black baton hands match the hour markers nicely - but that's a detail not shown in the catalog image.  They definitely look original though so I doubt they are later replacements. 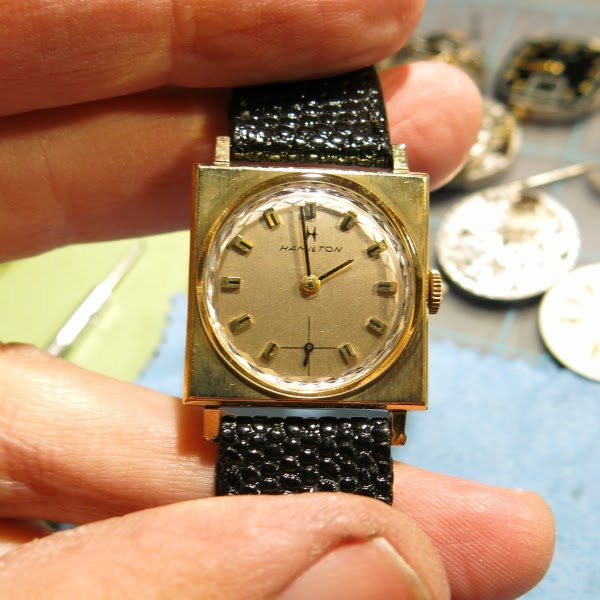 The stainless steel back snaps on and off. 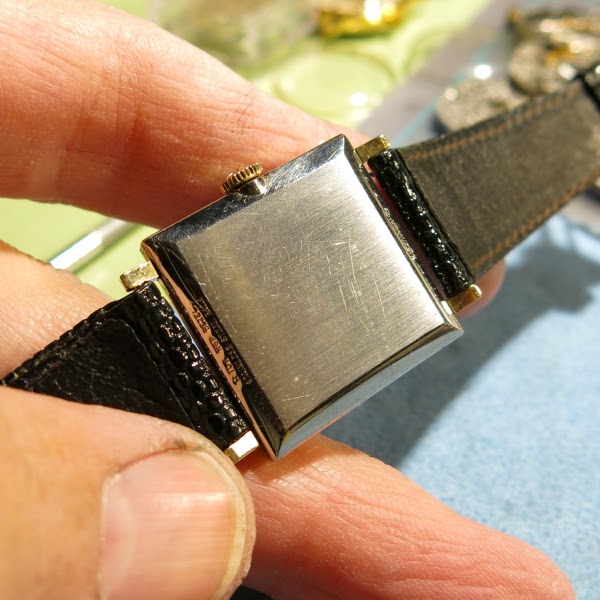 The 637 is a small movement - not the smallest I've seen but certainly small for a men's model.  In fact, the Thinline 6508 could be easily mistaken as a ladies watch today. 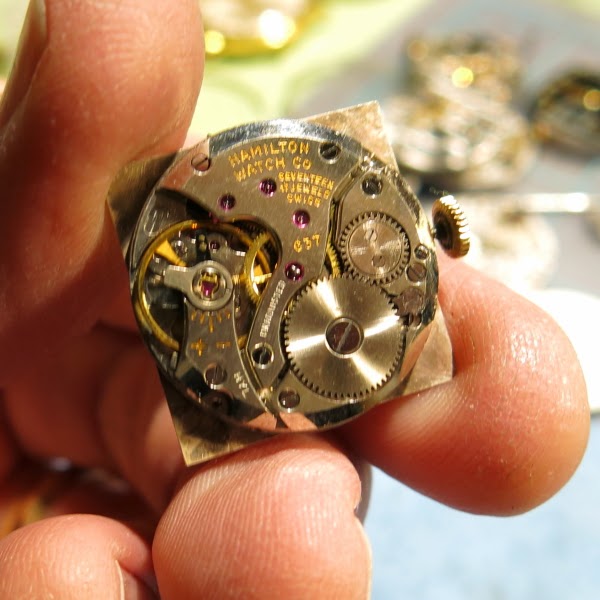 This photo is a little blurry thanks to a tight depth of field - but it gives you a good idea of why this movement when in the "thin line" models. 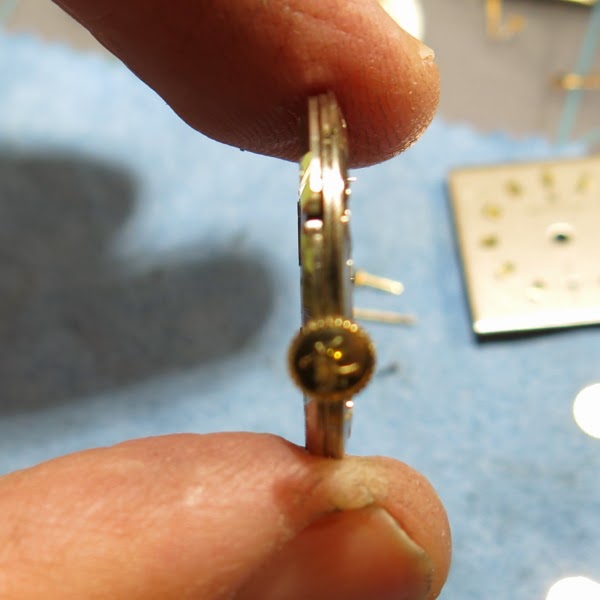 The 637 is a bare bones, no frill movement.  It's very straightforward and easy to put back together.  In the shot below, everything is cleaned and ready for reassembly. 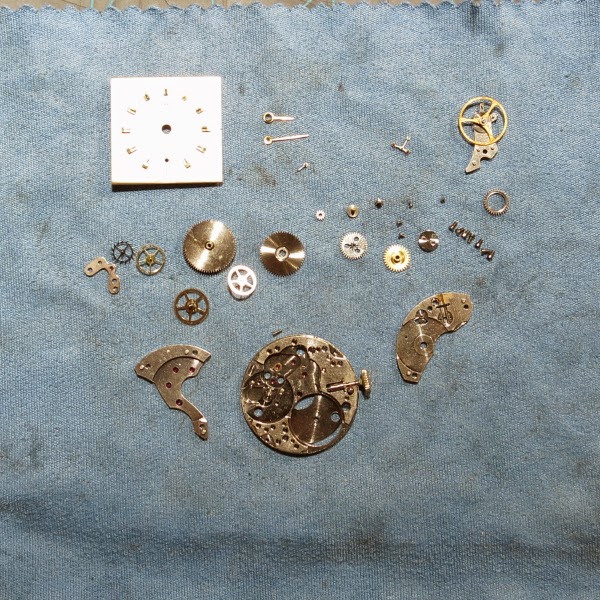 The running watch movement goes onto the timer. 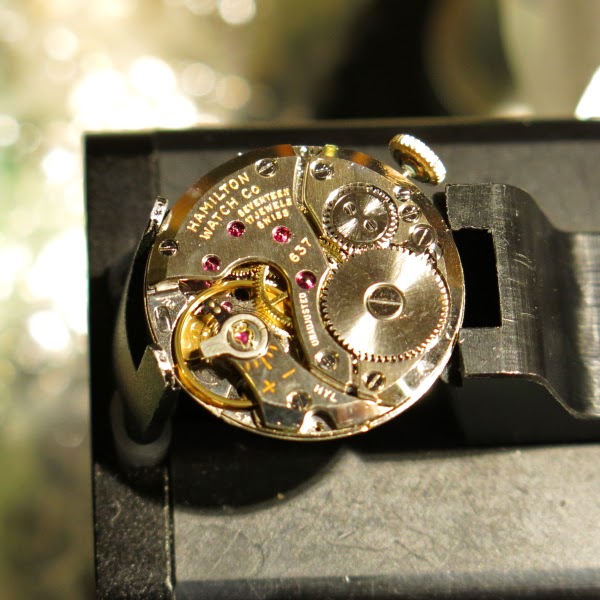 That's not too shabby - 5 seconds slow per day, good amplitude and a beat error less than 1ms. 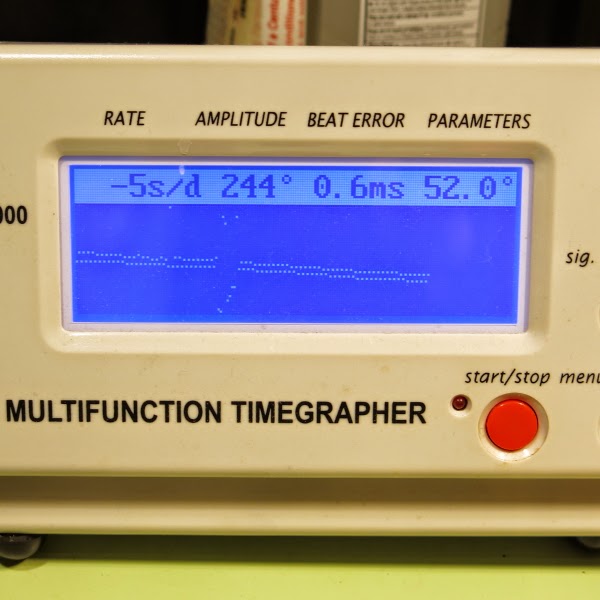 A couple of minor tweaks gets the performance to be even better.  There's a lot of adjustability to the 637.  A lot of people view the Swiss grades as being inferior to Hamilton's US-made models but I have to admit that the Swiss grades are a lot easier to adjust and fine tune. 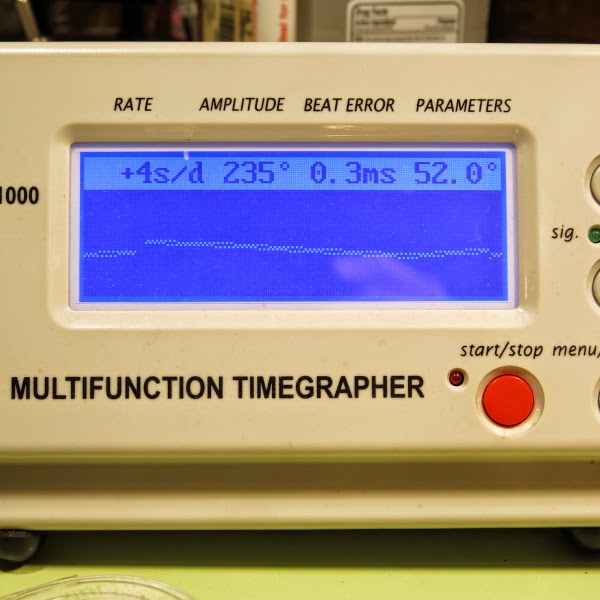 With the movement and dial back to looking and running great, everything goes back into the case.  This watch is ready for another 45 years of wrist time... albeit probably on a woman, as this watch is really too small for most men to wear. 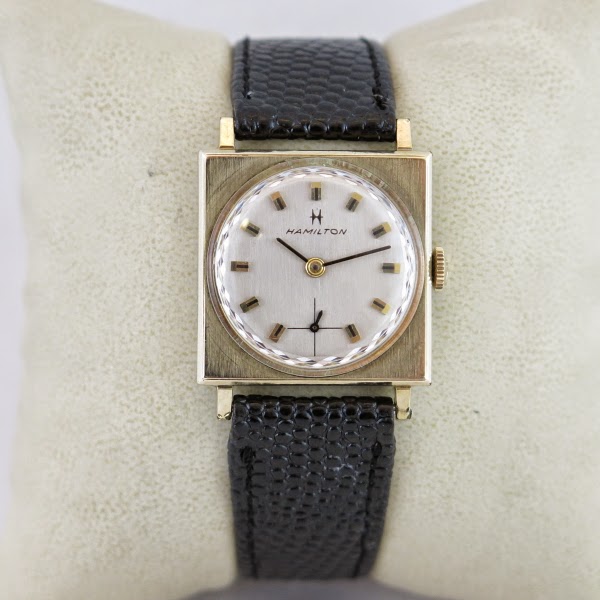