One of the models that is named after a location is the 1935 Ardmore.  I'm assuming it's named after one of the towns on the Main Line between Philadelphia and Lancaster PA.  I actually lived in Ardmore when I was in college about 30 years ago.

The Ardmore was produced for three years and came in 14K yellow gold only.  The bezel is faceted with a mirror-lapped surface so it's intended to be bright and shiny.   For the first two years the Ardmore came only with an applied gold marker dial.  In 1937 an applied gold numeral dial was also available.

Tucked inside an Ardmore you should find a 19 jewel 14/0 sized 982 movement.  This 19 jewel grade is very similar to the 17 jewel 980 used in the gold filled models - expect it has two extra cap jewels covering the escape wheel pivots.

Solid gold models from the mid-1930's can be hard to come by.  I don't know if that's because of the Great Depression but that's probably a good guess.  They are out there though.

I did recently land a nice Ardmore project watch.  It was going to need some help.  It looks pretty funny because it has a very thick domed crystal that gives it a gold fish bowl effect.  This is the applied gold marker dial.  The hands are a mixture... the hour hand is a black spear hand, the minute hand is a black solid diamond hand and but the second hand is correct.  A purist would want to see gilt baton hour and minute hands but good luck finding those! 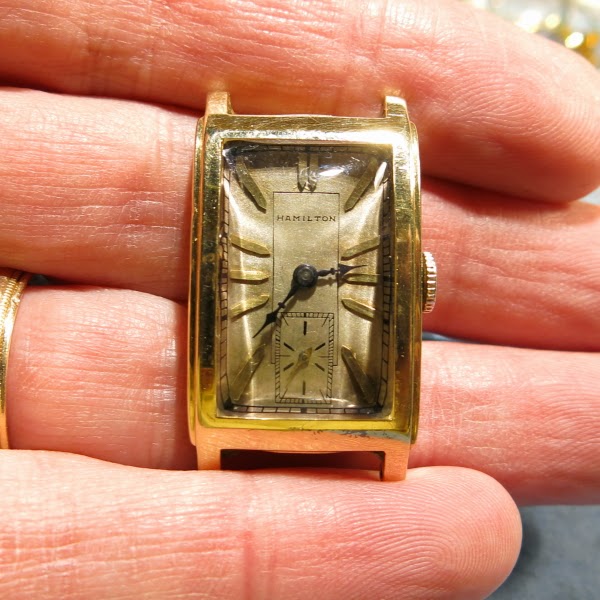 Here's a shot of the domed crystal.  I'll definitely change that out.  You can also see the bezel surface that should have a "mirror lapped surface".  So I'll spend a little time buffing the case. 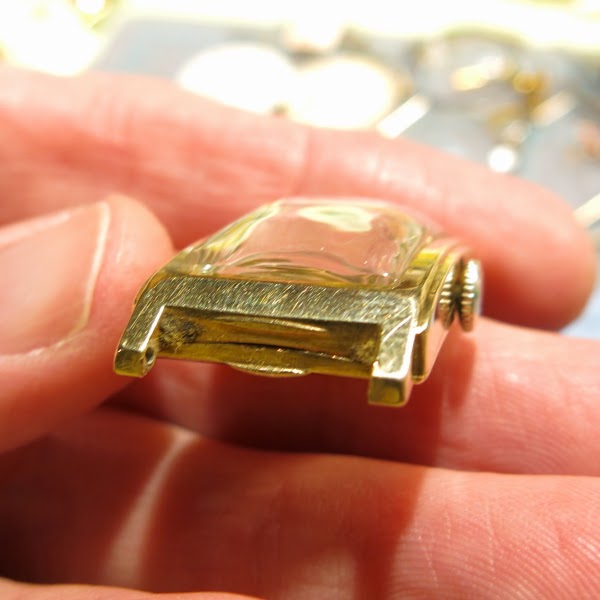 The case back is engraved with a Christmas presentation - one of my favorite types of presentations.  You know this watch was very special to Nate and Sonia. 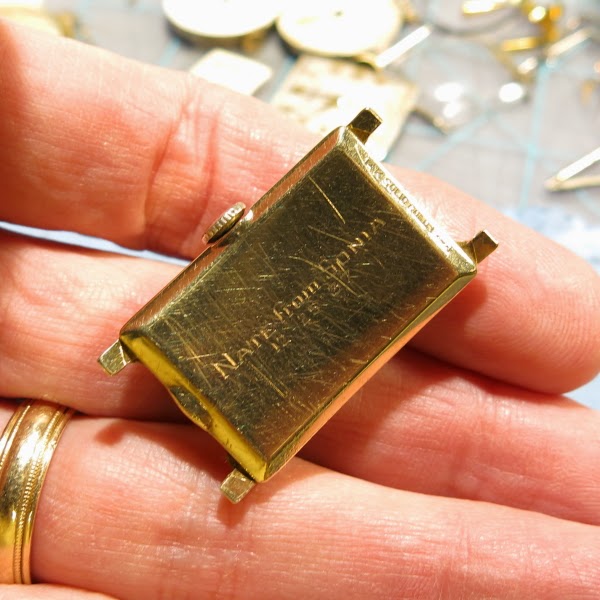 Without the distortion of the crystal in the way, you can see the dial is in decent shape but it's a bt worn too.  This is an engraved dial so the black printing is actually inset into the dial.  This type of dial can be refinished to look perfect like the day it was first made - so I'll be sending it out to be redone.

It's been a while since this watch has seen a watchmaker.  It runs but I can see that it's very dirty. 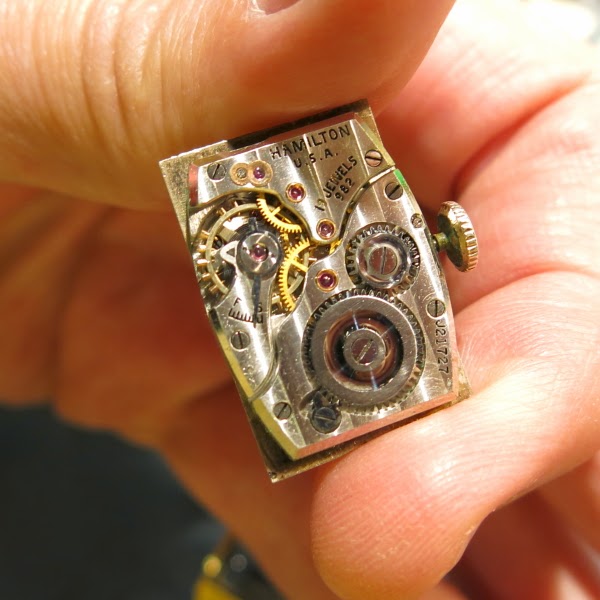 With the dial removed there is some green corrosion on the main plate.  Not the two piece set lever spring and bridge covering the setting wheel and minute wheel on the right.  On later 14/0 movements those are combined into a single piece.  You can also see the two cap jewels covering the balance pivot and escape wheel pivot at the base of the movement. 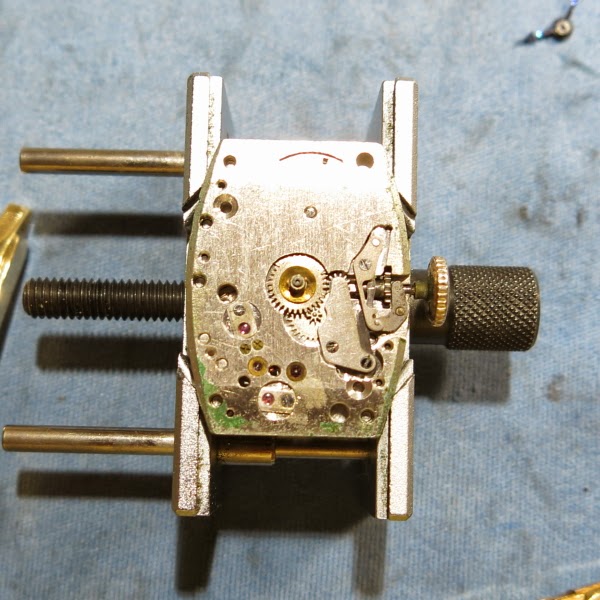 With the cap jewels removed, a problem becomes immediately apparent.  Can you spot it? 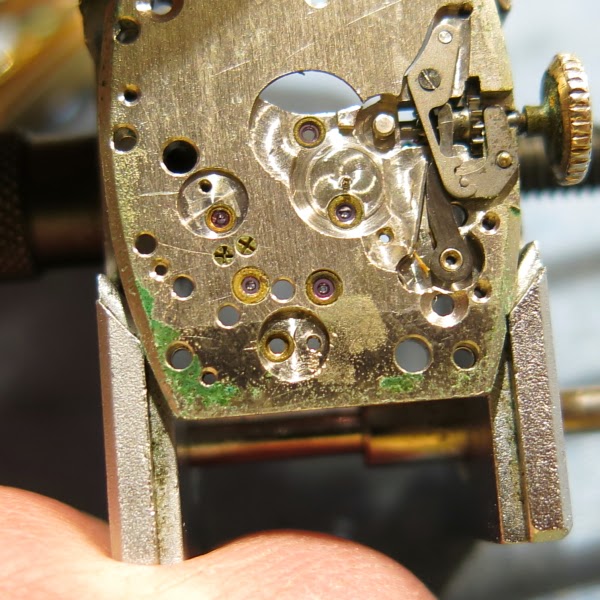 If you look closely above, the jewel is missing from the escape wheel setting.  It was in there but it fell out when I removed the cap jewel.  I'll have to install a new jewel after I clean the movement parts.

These ruby jewels are installed in settings called "chatons".  The jewels can vary slightly in size but all the chatons are the same size so you can replace jewels easily by pressing in a new chaton.  Shown below is a jewel I removed from a parts movement. 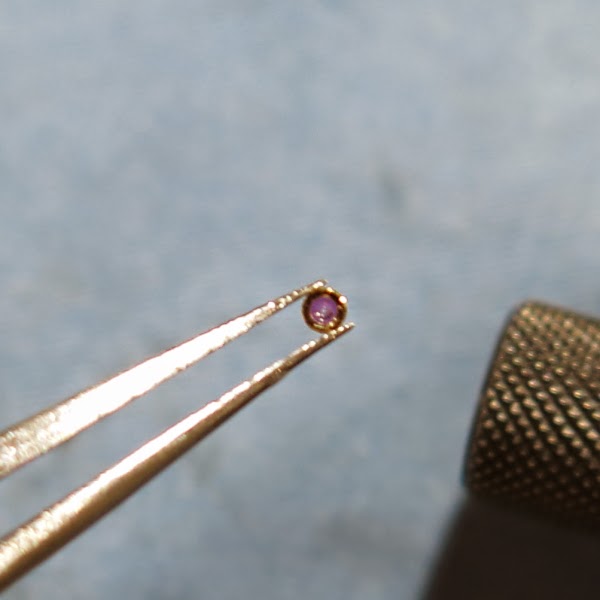 While everything is being cleaned in the ultrasonic I will prep a new glass crystal for installation. 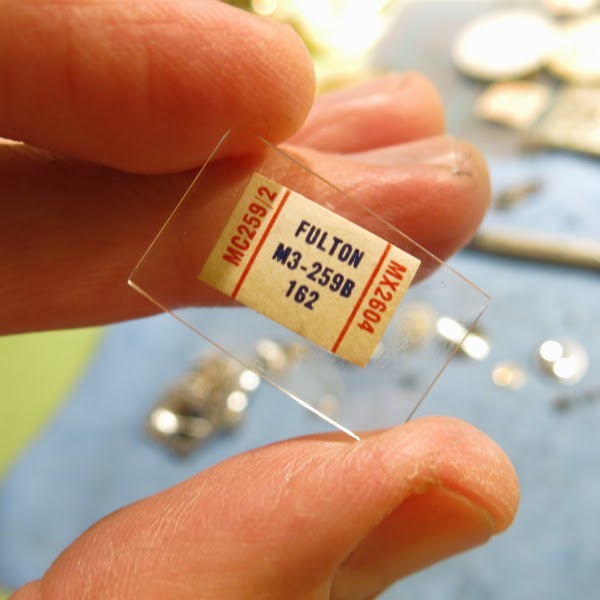 Everything is cleaned and dried.  Now it's almost time for reassembly.  First I have to replace the escape wheel jewel though. 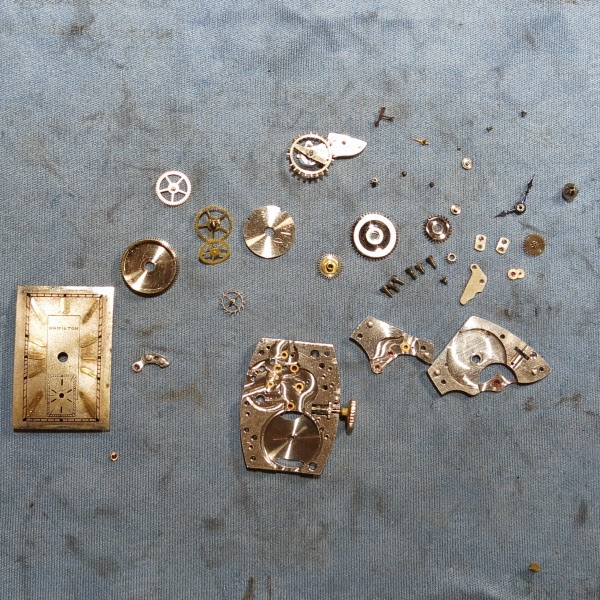 A punch and a stump in my staking set makes short work of installing the needed jewel. 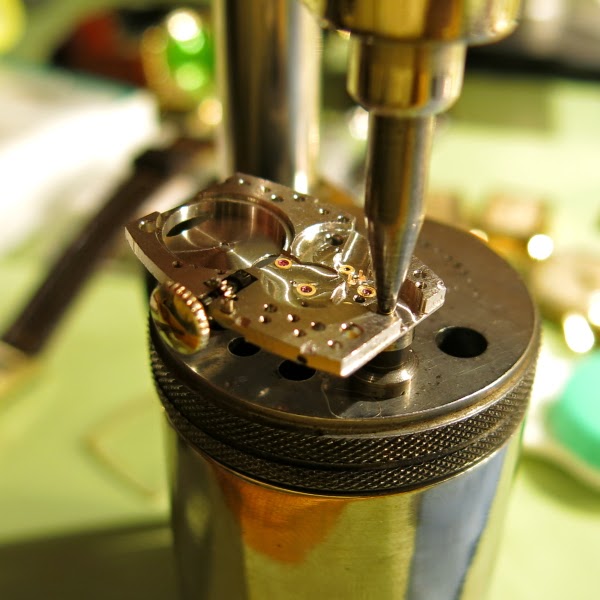 There... now to apply a modicum of synthetic oil to each jewel before reinstalling all the parts. 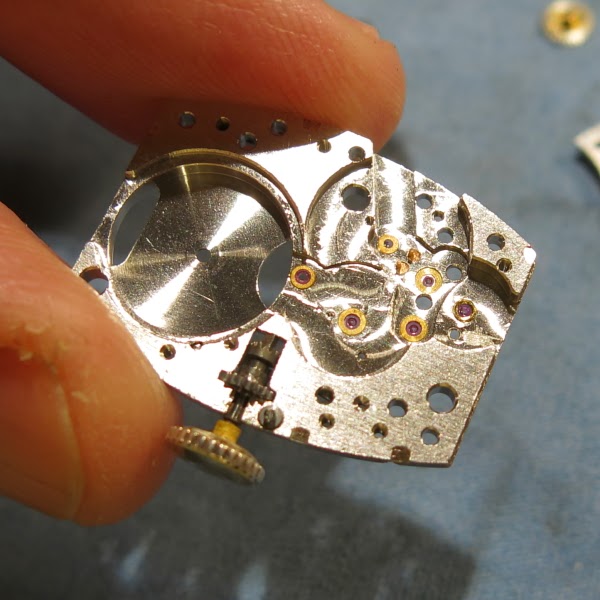 Nine times out of ten these old 14/0 movements need a fresh mainspring and this watch is no exception.  A new white alloy Dynavar spring will give this watch 40+ hours of reserve time. 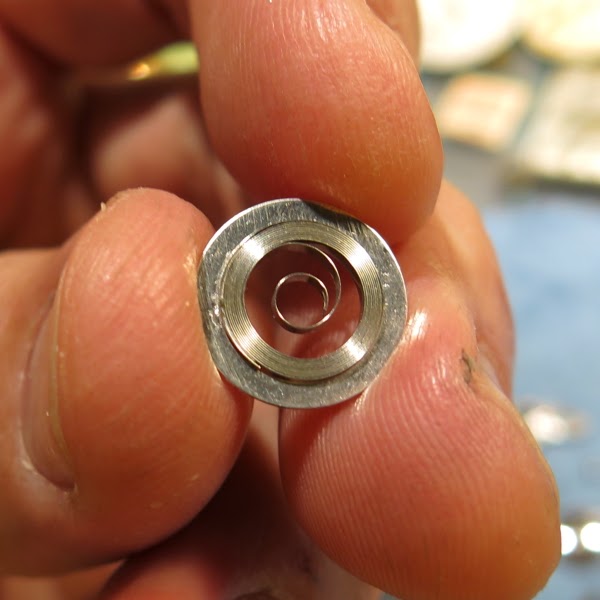 Everything is back in place and the watch is ready to have the balance reinstalled.  If all goes well, the watch will start running when I align the balance in place. 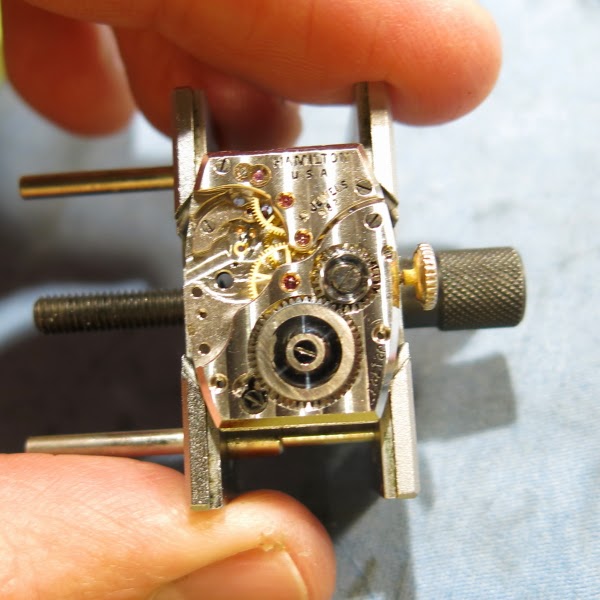 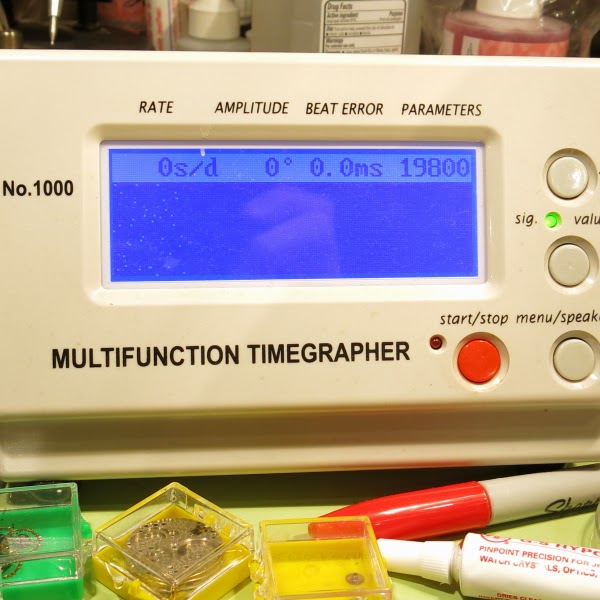 A trip to the demagnetizer and the hairspring cleaner correct the beat rate issue but the watch is still running three minutes fast per day.  The amplitude is okay and the beat error is fine but I need to slow the watch down. 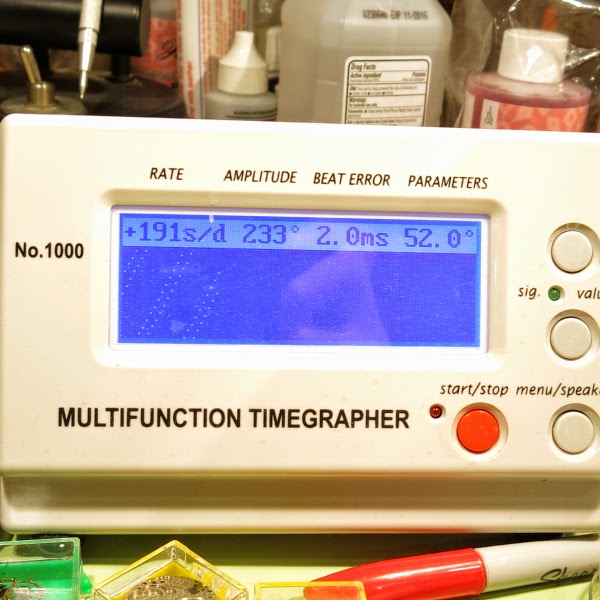 With the watch regulator set to full slow, the watch is still running 47 seconds per day fast.  It might settle down over the next few days.  However, sometimes this is as good as I can get it without changing out the balance.  There are things that could be done to slow it down further but the risks of screwing up the watch far exceed the benefit of getting closer to perfect timing.  A vintage watch that runs +/- 1 minute per day is fine with me - although I shoot for +/- 30 seconds most of the time. 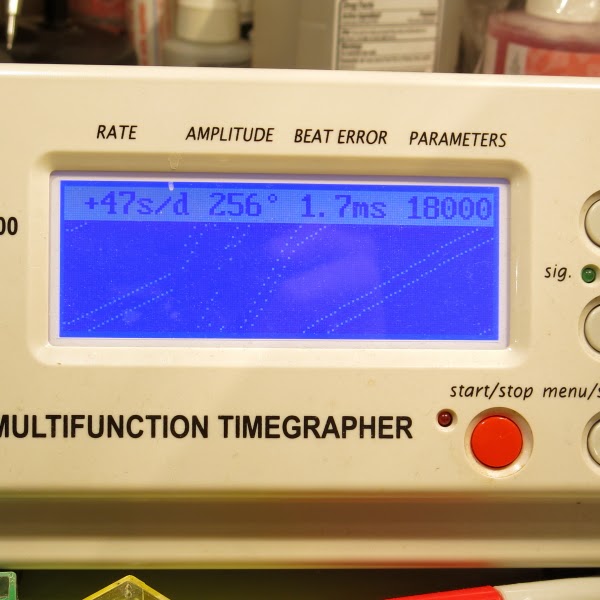 Now that the case back has been buffed you can see the engraving much better. 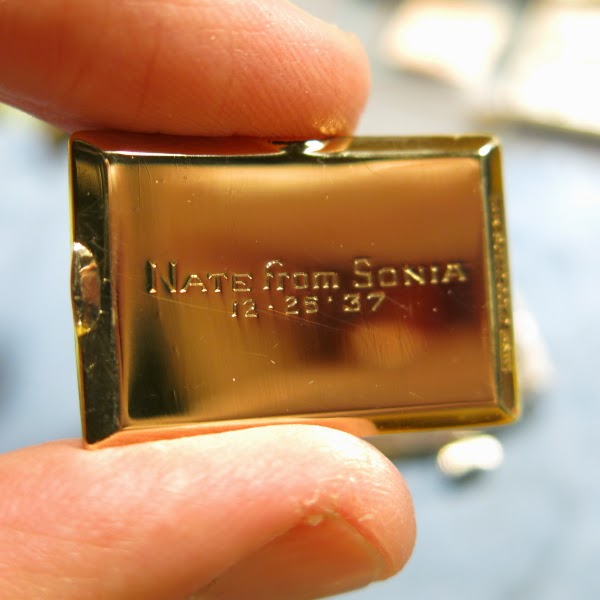 I don't have baton hands.  In fact, very few 14/0 models used baton hands.  However I do have a nice set of gild solid diamond hands.  They will look much better once the dial is refinished.  right now they sort of blend right into the background. 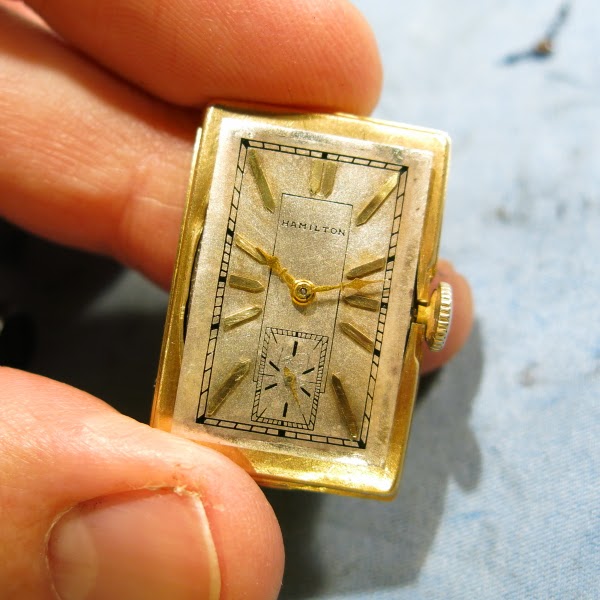 I happen to have a period correct Hamilton strap to go with the watch so here's the almost-finished project.  It looks a lot better without the crystal and black hands.  The polished bezel looks bright and shiny too. 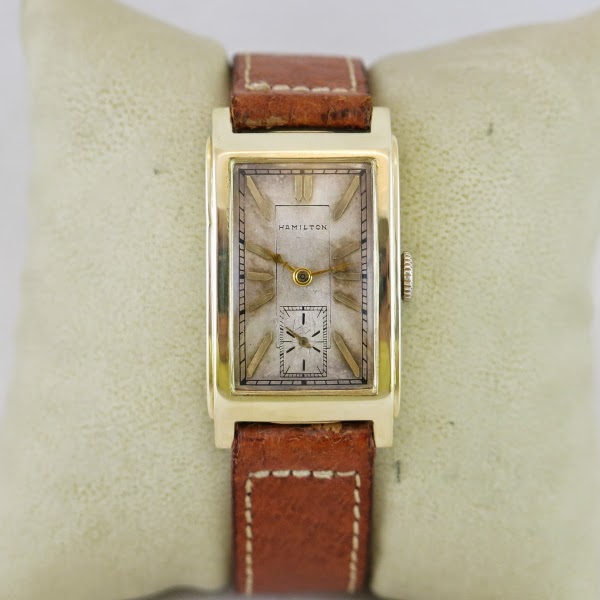 The Ardmore is a nice looking and substantial watch for the 1930's.  I can't wait to get a nicer looking dial and to complete this fine watch's restoration.  Stay tuned for an update to this post in a couple of weeks.

I sent the dial out to be redone by International Dial and as usual, they did a nice job.  The watch looks a LOT better now.  Check it out. 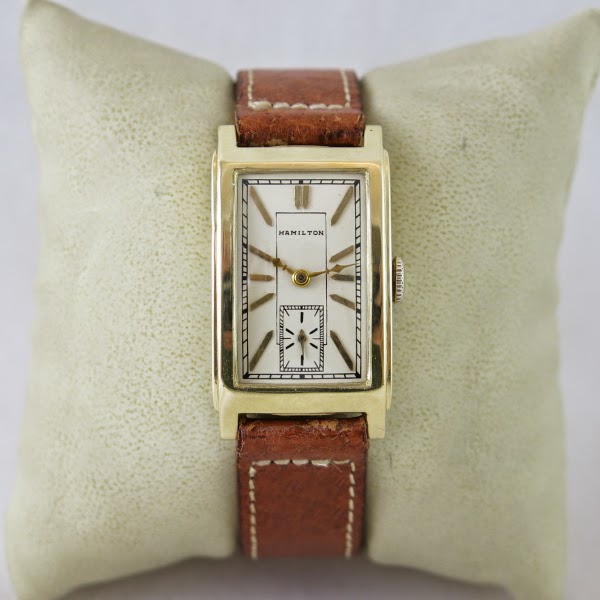