One of the fun things about a hobby is simply learning new things as you go along.  It's one thing to be good at doing something.  It's another to know a lot about something.  Some people focus on doing one or the other but I find it most enjoyable to pursue both.

Not too long ago I learned the M-series of watches was produced from 1961 through 1967.  I also learned that that first numbers of the model name was the retail price and the "- number" was the sequence that a model with that price occurred.  So to further explain, an M69-1 was the first watch to be $69 and a M69-2 would be the second model to cost $69.

It appeared to me that the M-series of watches all featured Swiss movements.  However, I've now learned that is actually not the case... and now you know it too. 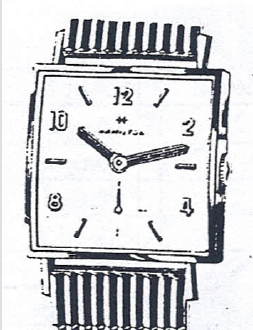 It's not clear exactly why Hamilton offered the M-series of mens' models and the F-series of ladies watches.  The conventional wisdom from other collectors I've discussed this is that Hamilton offered a special line of watches through a nation-wide retail outlet and marketed it separately from the model line sold through their traditional jewelry store offering.  If you're old enough, you may recall the catalog-companies that sold a variety of things either through the mail or through smaller stores with a showroom.

Anyway, it's always interesting to find a new M-series watch and this one is no exception.  The M110 features a 10K gold filled case with a sterling silver dial and solid gold numerals and markers.  To look at it, you could easily expect it to be part of the regular model line.  It fits right in with the other high-end US-made Hamilton models.

My M110-1 project watch arrived in typical "found in a shoe box" condition.  It was obviously used a lot and although the crystal and dial show it's age, the case itself is in very nice shape. 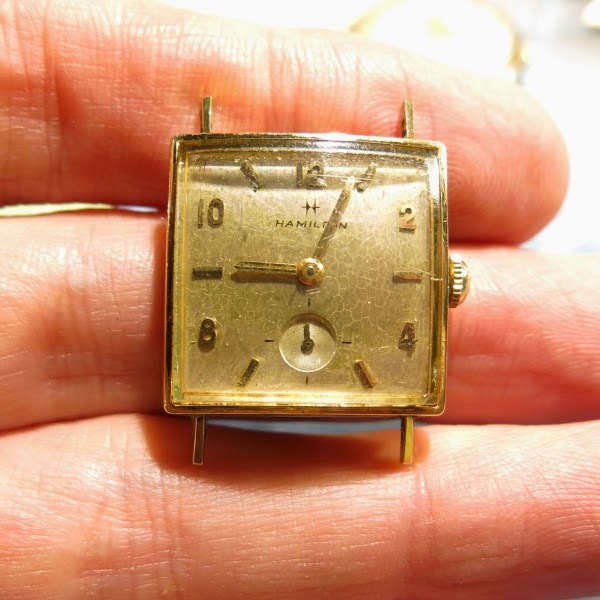 I would have expected an M-series watch to have had a stainless steel back but this model has a 10K gold filled case.  Perhaps Hamilton wasn't quite sure what they were going to do with the M-series models at first. 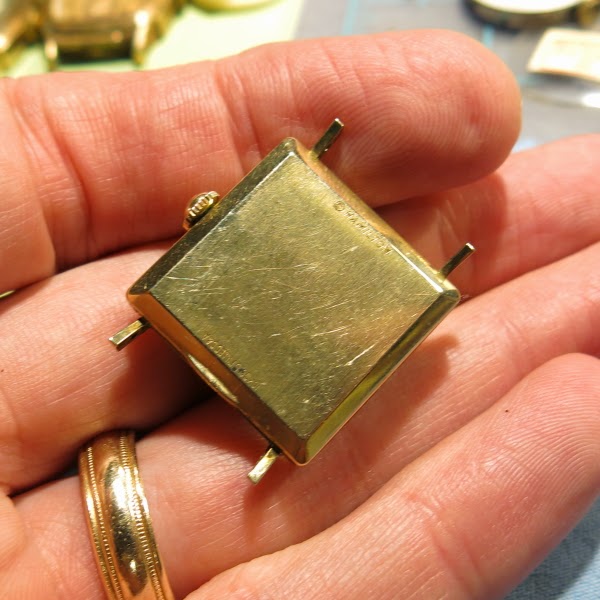 The silver-butler finished dial has a crackled appearance to the finish.  I suspect this is the lacquer failing, perhaps as a result of moisture.  The plastic crystal did have a small crack.  However there is no corrosion so maybe the dial will clean up nicely... we'll see. 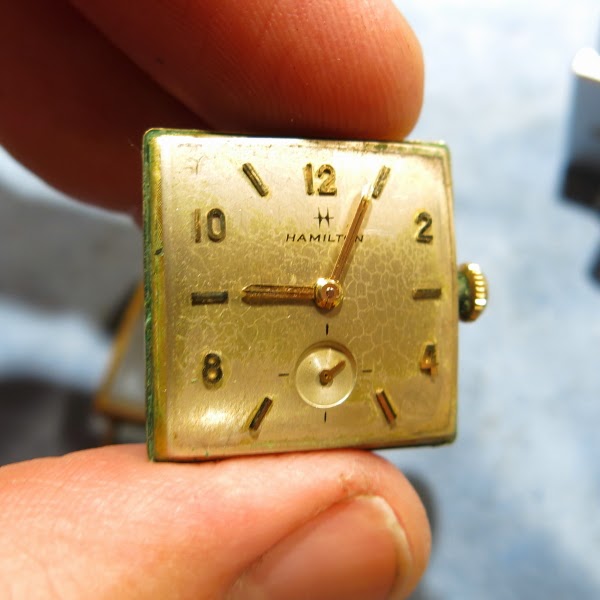 The 770 was Hamilton's top-of-the-line movement.  It's very nicely made, shock jeweled, and easy to work on. While all the parts are in the cleaner, I will prep a new crystal for installation.  Since the crystal that was on it was acrylic, I see so reason not to replace it with another one and this CMS640 is a drop-in exact match. 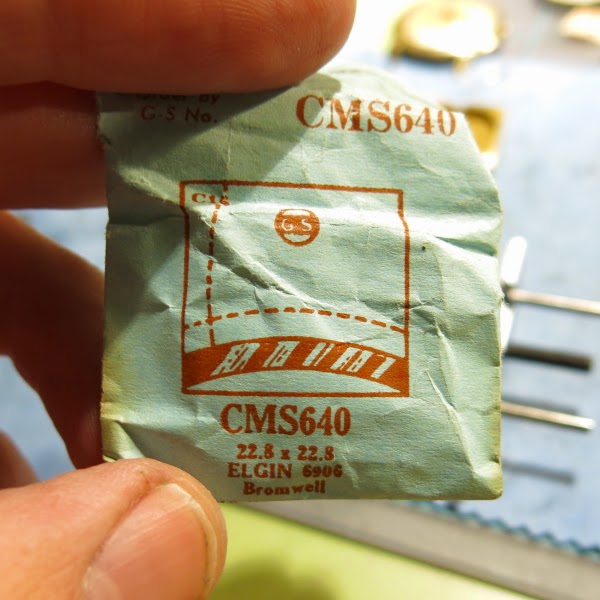 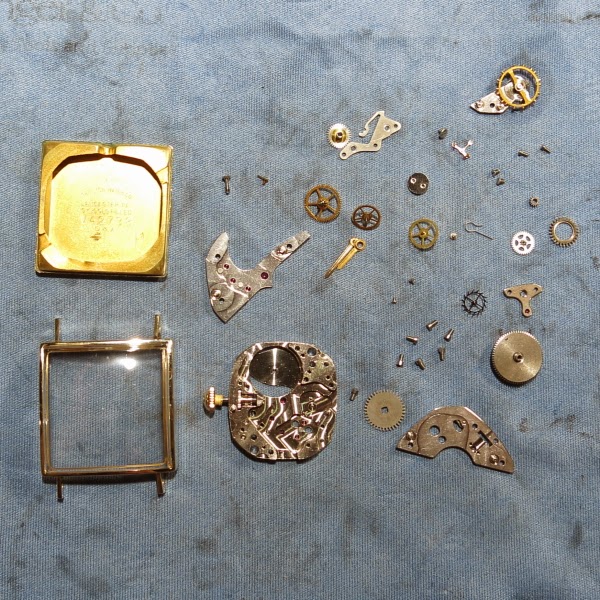 The reassembled movement is purring away so it's off to the timer to see how it's truly running. 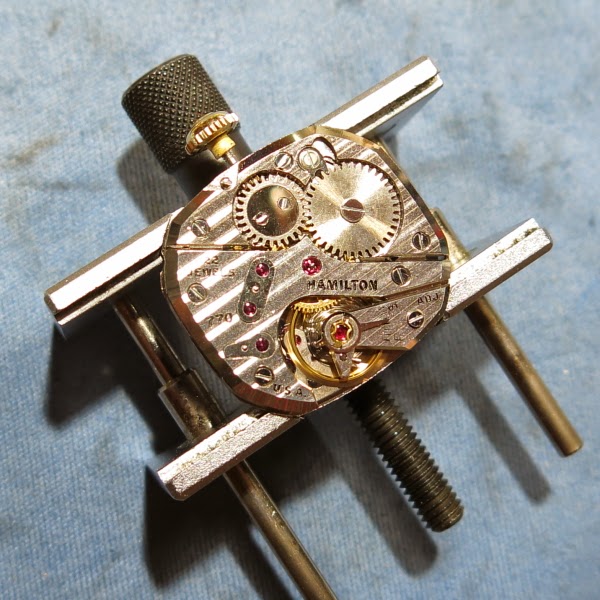 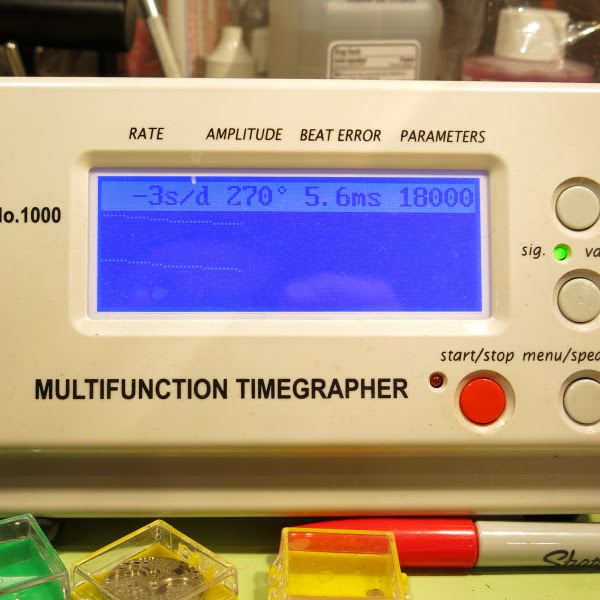 Adjusting the beat rate on a balance design like this is very tricky.  You need to remove the balance from the balance cock and then rotate the hairspring on the balance staff in order to movement impulse jewel one direction or the other relative to the hairspring stud.  It's a great opportunity to screw up an otherwise okay balance.

Since the risks of screwing up are high, I tend to view beat errors over 4 as "must fix" and beat errors under 3 as "good enough".  Beat errors between 3 and 4 are the worst... as then I have to ask myself if I feel lucky.

A beat error of 5.6ms is high enough that I'll give it a shot.  It's a little bit of a guessing game to know which direction to move the hairspring collet and by how much.  After my first try I was able to get it to 2.8ms.  That's good enough. 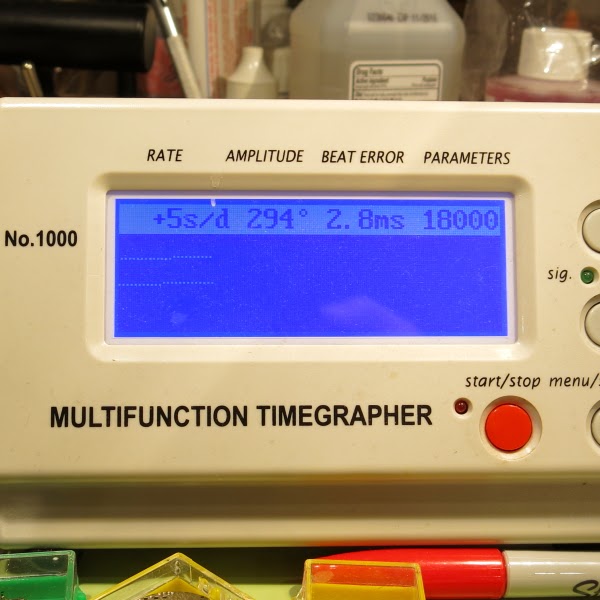 With the beat error reduced I was into the home stretch.  All I needed to do from their is reinstall the dial and hands and put it all back in to the freshly polished case.  The dial actually cleaned up fairly well.  It looks better than my photo makes it out to be.  The dial is actually curved so it 's taller in the center than on the sides and it's hard to get a good photo of it.  The crackled appearance is now gone and I still have the printing - so that's the perfect time to stop cleaning and call it a day. 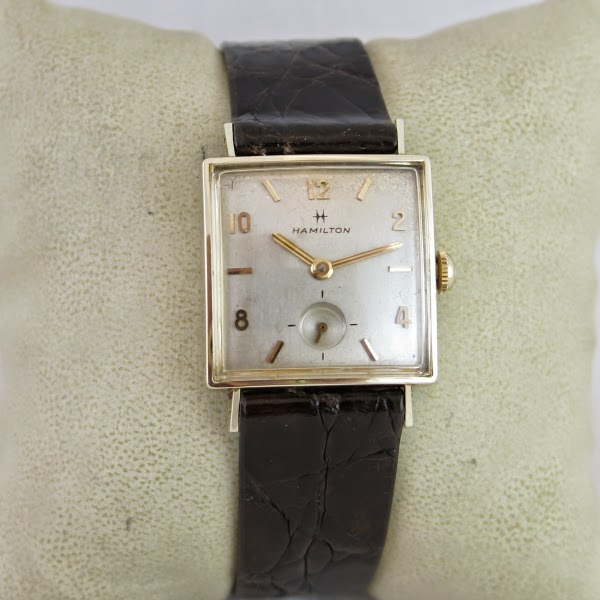