I think it's very interesting how some models never made it into the catalogs.  One of the earliest examples is the 1928 Oval and another is the 1931 Clinton.   The model name was re-used in the 1949 with another Clinton model - but that one did make the catalogs.  The 1931 Clinton was made for two years.

The Clinton came in a 14K gold filled case in either white or yellow gold.  A similar model in sterling silver was called the Greeley.  So this style model is called the Clinton / Greeley but technically only the silver version is the Greeley.  Less than 1,700 were made so they are exceptionally scarce - especially in nice shape.

One of the facets that make the original Clinton interesting is it's one of the first models to come on a metal bracelet.  Technically that honor (first use of bracelet) is held by the 1931Palisade but that's really just because the Palisade did make the catalogs.  I suppose you could say it depends on what the definition of first is. 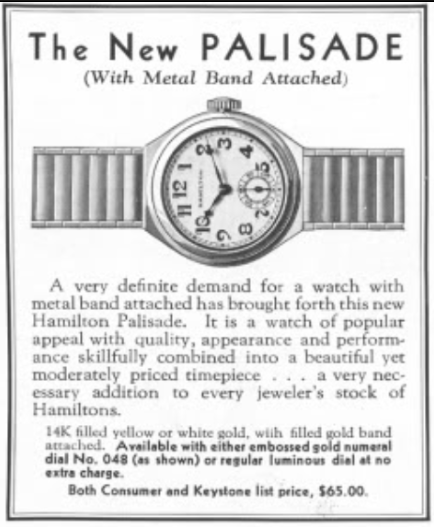 Anyway,  inside the gold filled (or silver) case you will find a 17 jewel 987F movement.

Another interesting factoid with the model is it later came with lugs so that a strap could be mounted. When equipped with the bracelet, the bracelet was integral to the bezel so it was not removable and a strap could not be installed in it's place.  I have yet to see a strap Clinton in the flesh but I have seen a couple of photos.  I believe they are uber-rare.

Well, as fate would have it, I recently landed a Clinton project watch.  They are very hard to come by in nice shape.  Typically the bracelet is a mess and the bezel is heavily worn through.  However, in my case, I scored what I thought was a pretty decent example.

As you can see below, this is a bracelet example but the bracelet is gone except for a couple of links on each side.  Someone got creative and put holes in the side of the outermost link so a 16mm strap can fit inside with a spring bar. 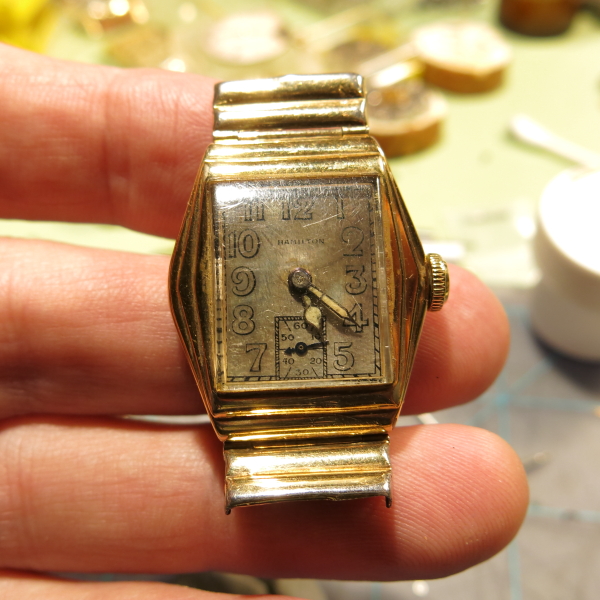 The dial appears to be original and it's is fair shape.  There are some scratches and it appears to have been cleaned free of lume.  The hands still have radium and I could leave it as is but I personally prefer to get these old dials redone so they look good and are radium-free. 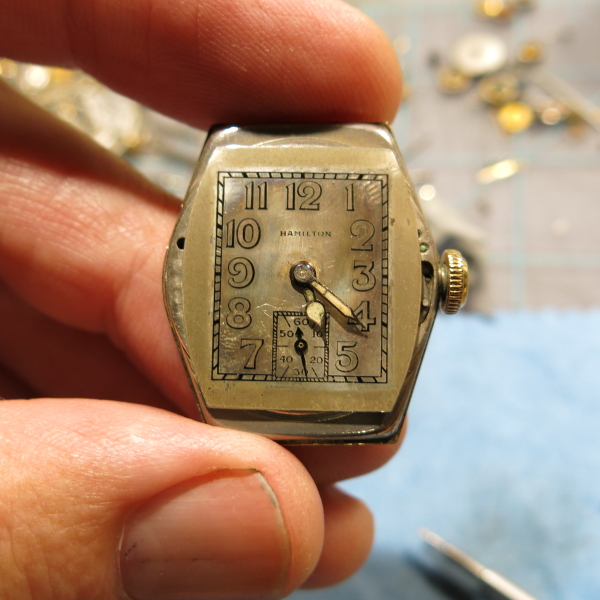 The movement is in nice shape but could stand a good cleaning.  This is an early 987F I think.  Based on the tables I use this is a 987 serial number but it's clearly a 987F.  That's rather odd, I think.  Maybe the movement is a replacement but I suspect it was just in inventory for a while before it was used. 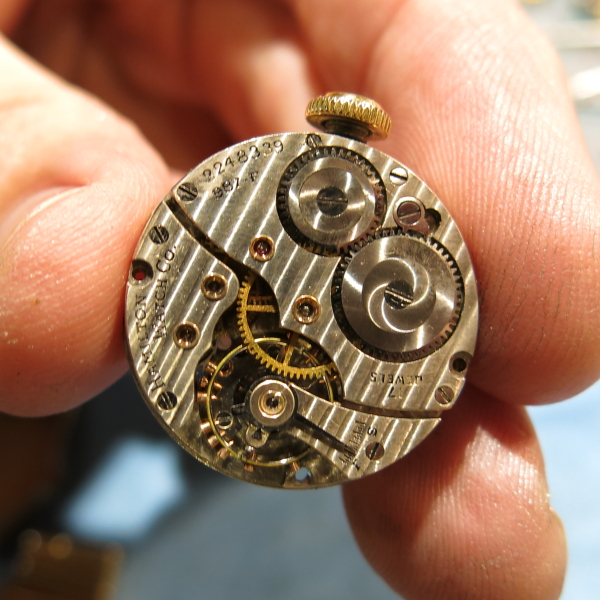 A new glass crystal will be a nice replacement over the current plastic one.  There's nothing wrong with plastic, I just prefer glass. 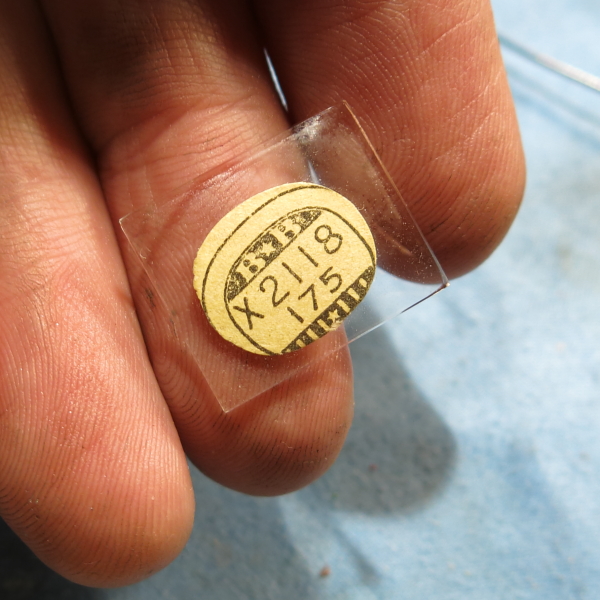 While all the parts are in the ultrasonic, I'll show you something you may not have known.  Inside the case back of the watch is a serial number.  The number doesn't really mean much as cases were ordered in batches and it's possible that the next number is actually a different model.  However, the last four digits of the case serial number is used to match the bezel. 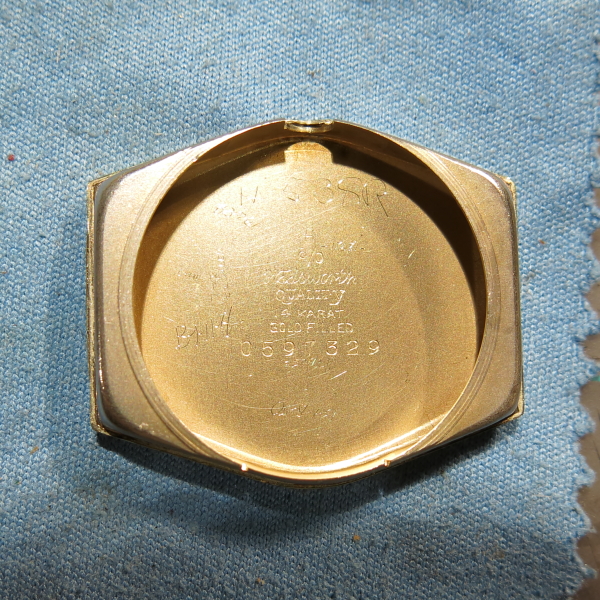 Inside a two-piece case, the same four digits are hand-scratched onto the inside surface.  Pseudo-roman numerals are used so if you look closely you'll see VII III II VIIII for 7329.  When the case has three parts, the center is stamped and the front bezel is scratched like shown below.  When all three (or two) sets of numbers match, you know they left the factory together. 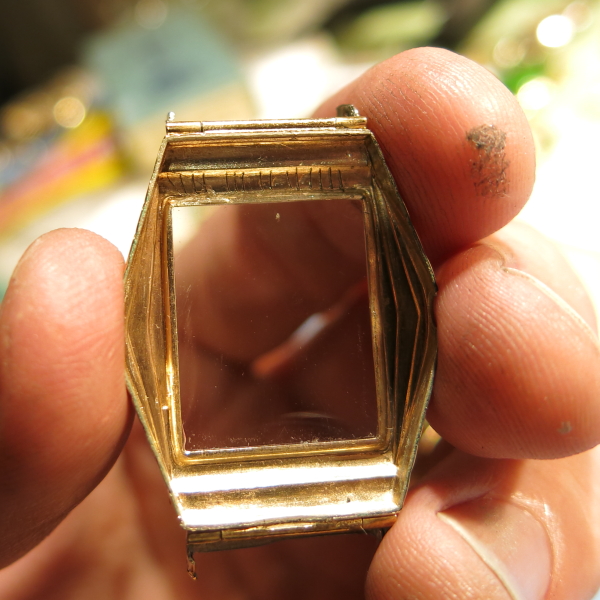 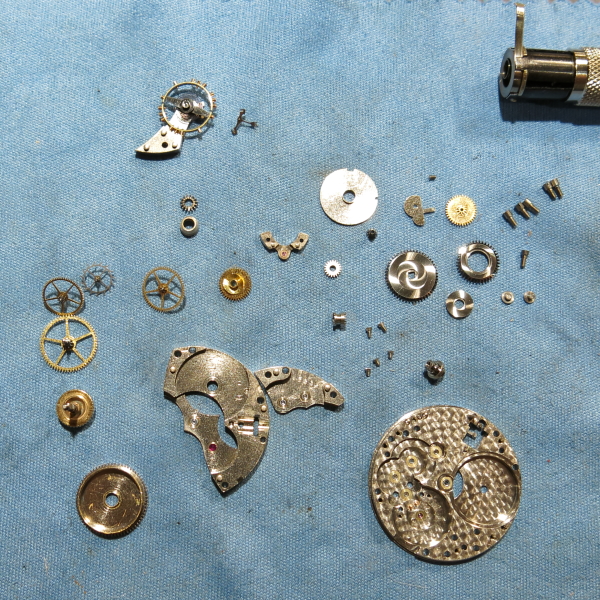 The movement is now back together and running so it's off to the timer. 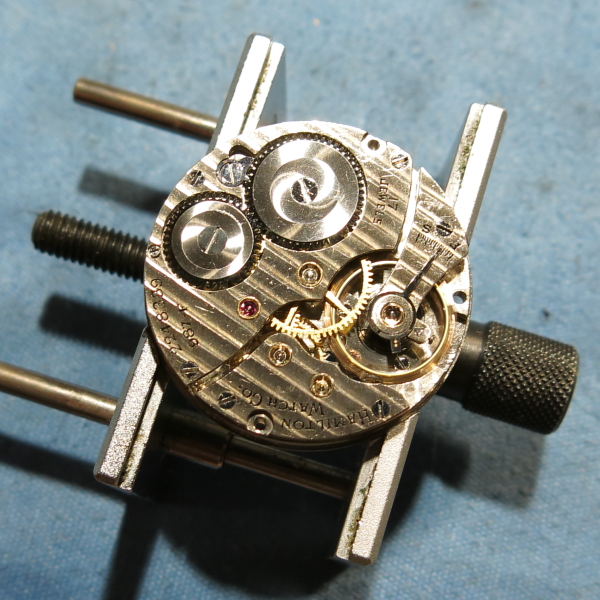 What's wrong with this picture?  The beat rate is too high at 19,800 (it should be 18,000).  The timer chooses the beat rate so that's an indication that there's a problem.  The pattern looks like random noise too - so something is clearly going on with the balance. 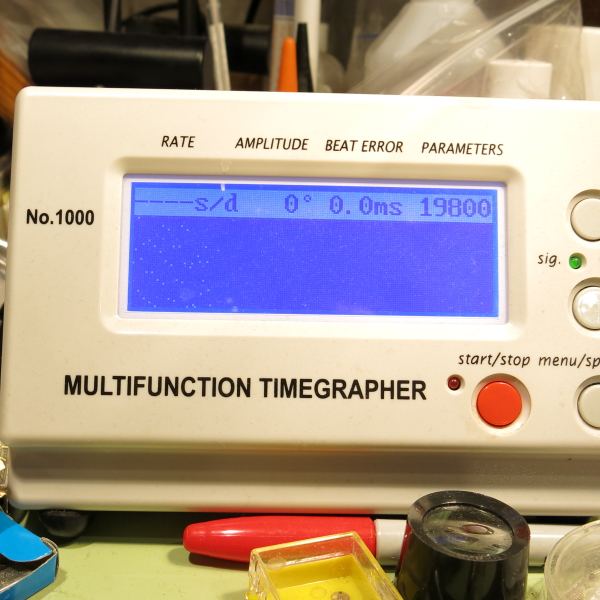 These 1930's 987 variants can be a royal PITA sometimes and they are very finicky.  You need to really look very closely at the hairspring to make sure it's not hung up or banging into something like the center wheel.

I look through a 10X loupe from the angle below to see what the hairspring looks like.  The hairspring leaves the stud, passes through the regulator fork, then turns sharply to pass over the hairspring coil until it turns again and drops to form the outer most coil of the spiral.  This one looks fine - which is good because reshaping hairsprings is very difficult. 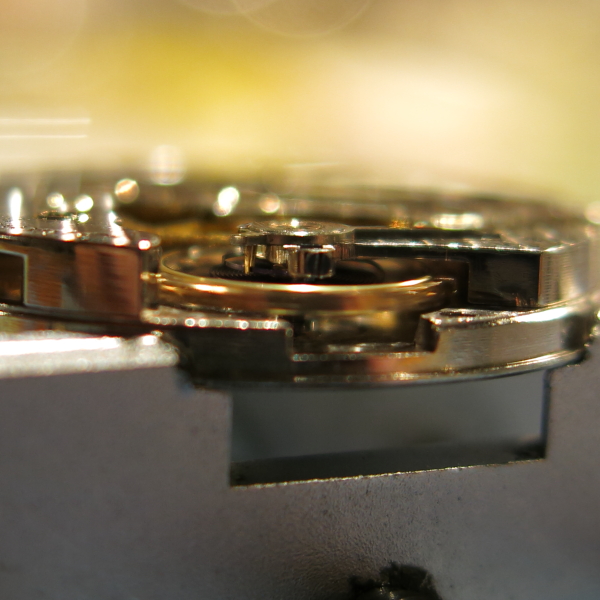 Recleaning the balance and running the works through the demagnetizer seemed to do the trick.  It's running just fine now. 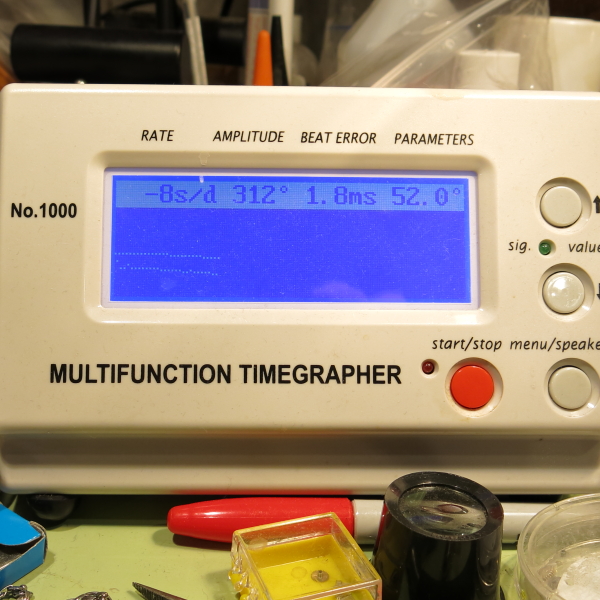 And here's the finished project - all dressed up with a nice vintage strap and with a refinished dial and hand set to boot.  It looks pretty spiffy now, if I do say so myself.  My merciless camera reveals the wear through on the bracelet but it looks much better in person. 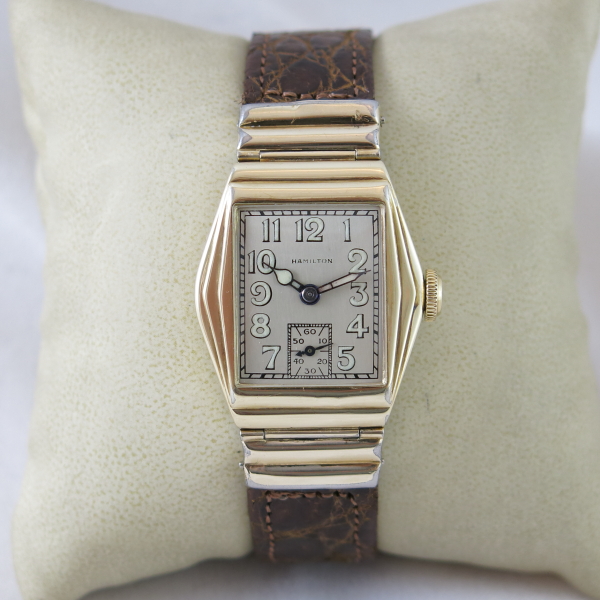 This is a sharp-looking watch and I kind of like the bracelet / strap combination.  It's good to know that a Clinton with a broken bracelet can be saved.
Posted by HandyDan at 4:45 PM