Pocket watches largely fell out of favor with the advent of wrist watches in the 1920's.  However they continued to be made through 1969.  In fact, excess inventory of pocket watch movements continued to be sold into the early 1970's.

In 1955 Hamilton introduced an entry level line of pocket watches called the "Traffic Special".  That line was also used in the 1920's with certain size 16 pocket watches that were used on trollies and street cars.  The Traffic Special line in the 1950's was priced at about 50% the cost of a railroad approved 992B model.  They were intended for "working men" who wanted an accurate and easy to read pocket watch but without the price tag of a railroad grade model.

Two models were introduced in 1955, the Traffic Special I in a stainless steel case and the Traffic Special II in a yellow rolled gold plated case.  Both are size 16 watches and feature a Swiss-made Hamilton 669 movement with 17 jewels.  Apparently the only dial option was a single sunk heavy gothic design. 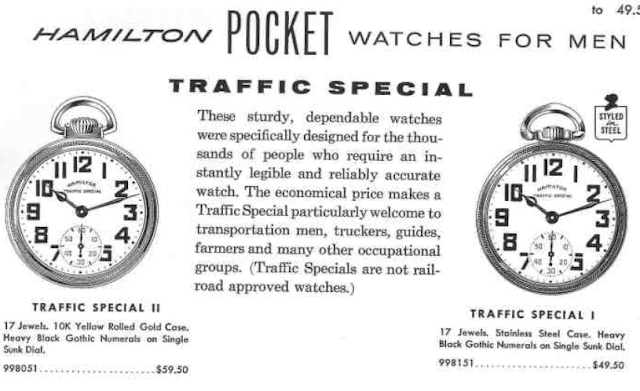 In 1958 the models evolved slightly and although the names stayed the same, the models appear to have swapped crowns.  The Traffic Special I received the half onion style crown that was on the Traffic Special II prior.   Then in 1960 another dial option was added, a single-sunk Montgomery dial.  Both models continued to be produced through 1965.

In 1966 the model line evolved again with the introduction of the Traffic Special III and IV.  It's hard to tell what changed in the line though.  I can't really tell from the catalogs alone.  I believe the main difference was the utilization of a new Swiss movement, the 670 grade.  The model line continued through 1969. 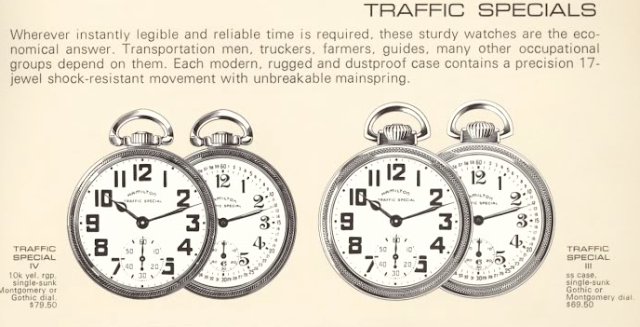 That said, I recently acquired a Traffic Special because the price was right and I wanted to see what the model line was all about.  I'm not really sure of it's age though.  It has an early crown but the Montgomery dial.  There are no serial numbers to date the watch so it's really a challenge to be more specific.

The bow on my project watch is a little different than the catalogs too.  Perhaps it's a replacement?  It's tight and certainly appears to be original but I can't be entirely sure. 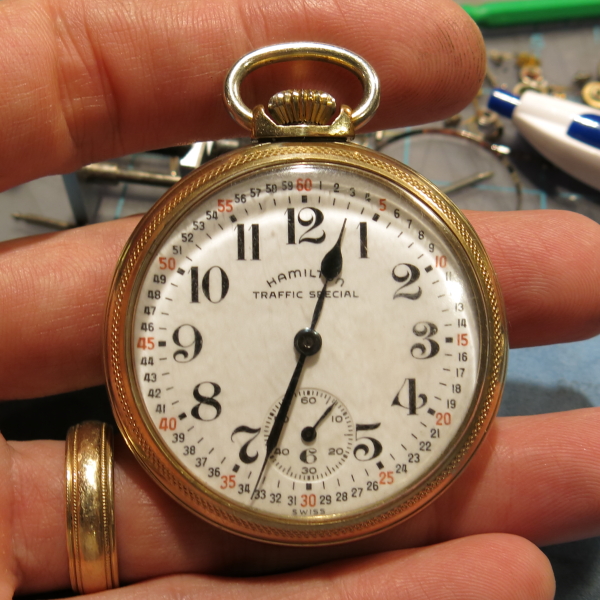 The case back shows some wear, especially near the crown.  RGP cases are no where near as sturdy as gold filled cases.  That said, a light polish will do a lot for this case's appearance. 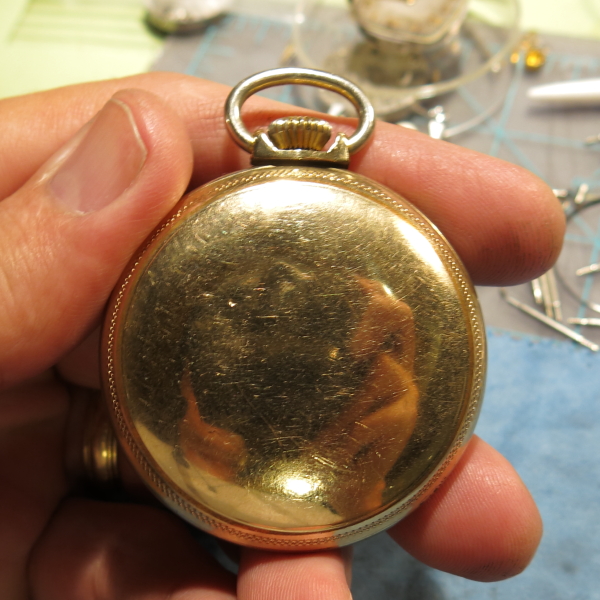 The 17 jewel 669 movement looks like a giant version of other Swiss-made manual winding movements from the same period.  I'm not sure who the maker is though.  I did not see any marks under the balance to denote the Swiss company. 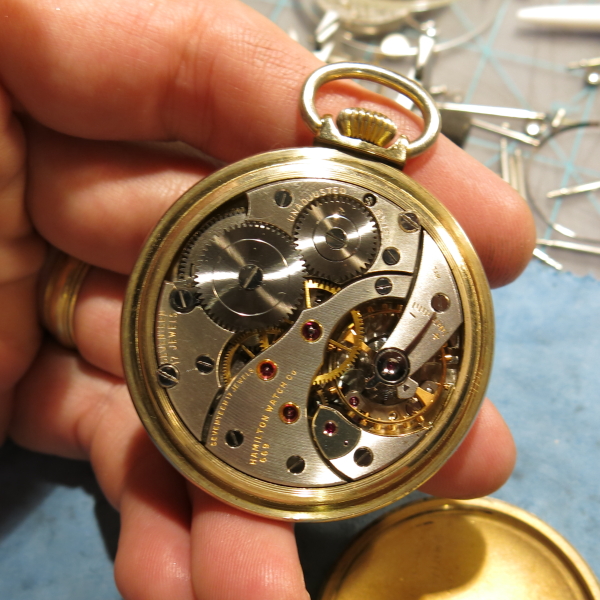 The movement is positive set, like a wrist watch, so a set lever screw allows the stem to be removed.  Then the two case screws can be removed and the movement drops out the front of the case. 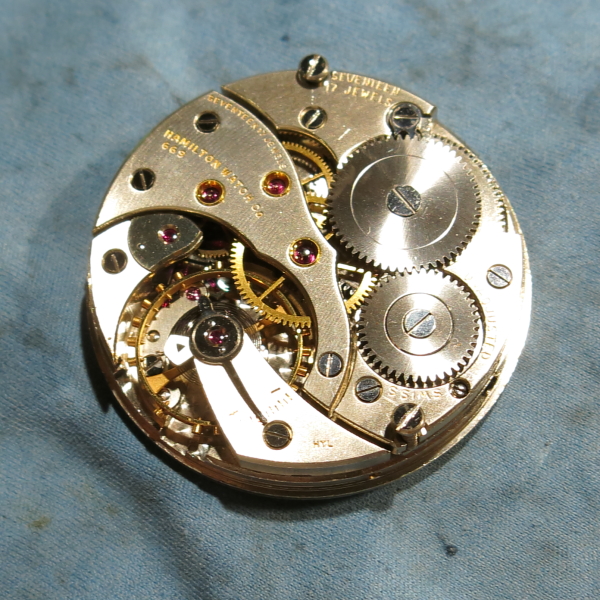 With the dial and hands removed, the front of the main plate looks like a giant manual winding movement. 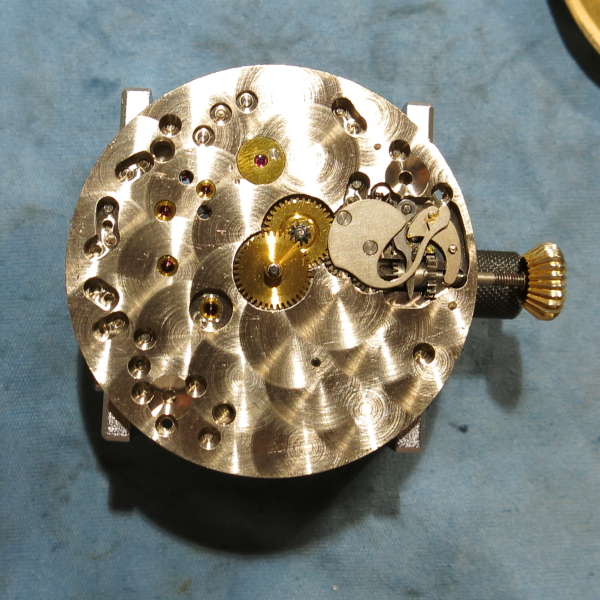 Removing the two screws holding the set bridge down allows all the setting parts to come off. 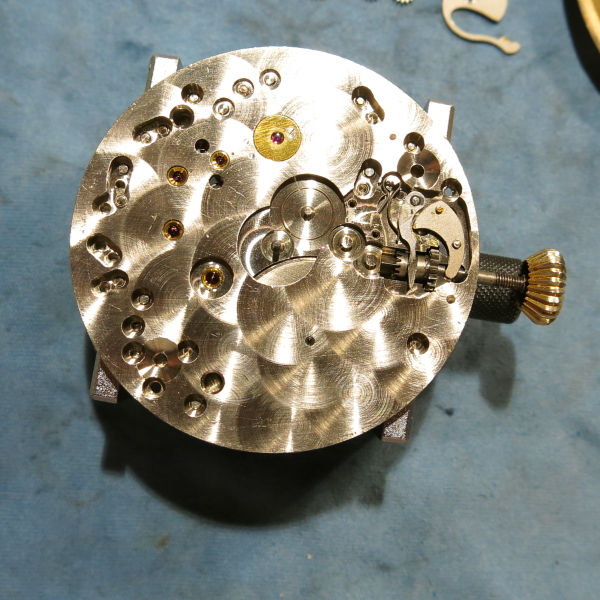 On the reverse, the first things off are the winding and ratchet wheels.  Then the barrel bridge can be lifted off. 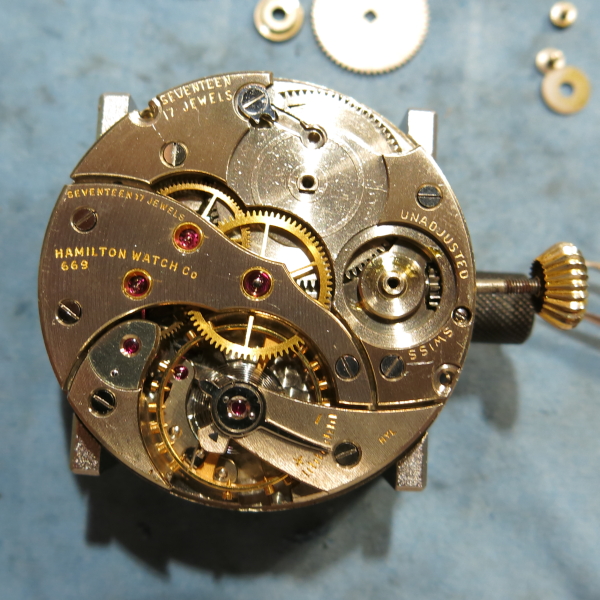 Without the barrel bridge in place, you can see the mainspring barrel contained within.  That stores the energy of the mainspring and powers the watch.  Next off is the train bridge supporting the center wheel, third wheel and fourth wheel. 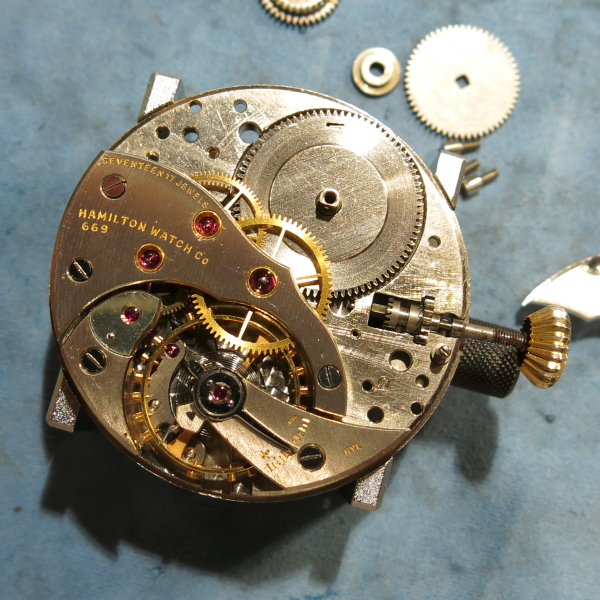 Now you're starting to see how the power from the mainspring is conveyed to the balance wheel.  Next off is the escape wheel bridge. 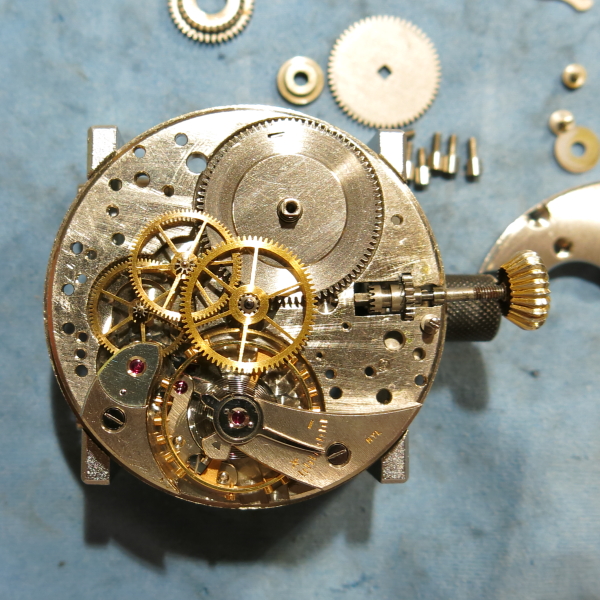 Now I'll remove the balance wheel.  One screw holds it's bridge in place and then I'll lift the lot off as an assembly. 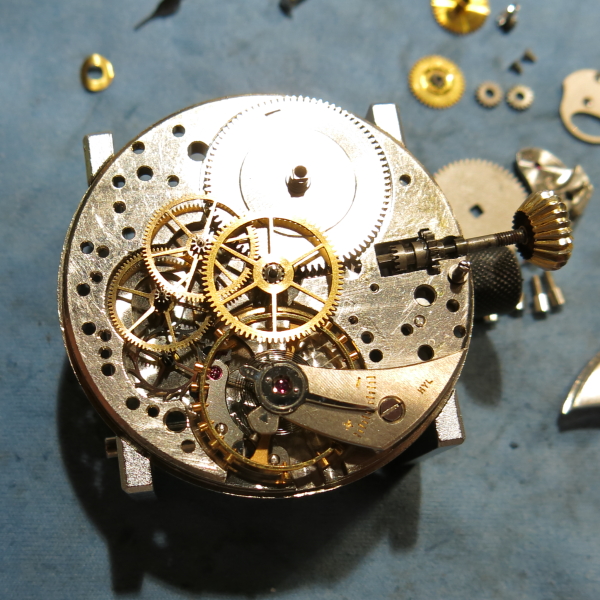 With the balance out of the way, you can now see the pallet fork.  The pallet fork flips back and forth with each pass of the balance and meters out the power of the mainspring one tick at a time. 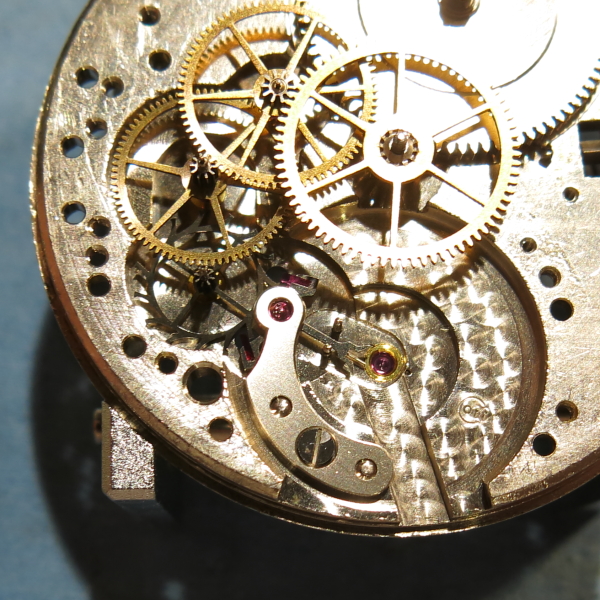 The back of the main plate is now clear of parts so it's now ready to go into the ultrasonic.  One reason I don't tend to do pocket watches is they are too large for the baby food jars I normally clean parts in.  For size 16 watches I need to move up to jelly jars. 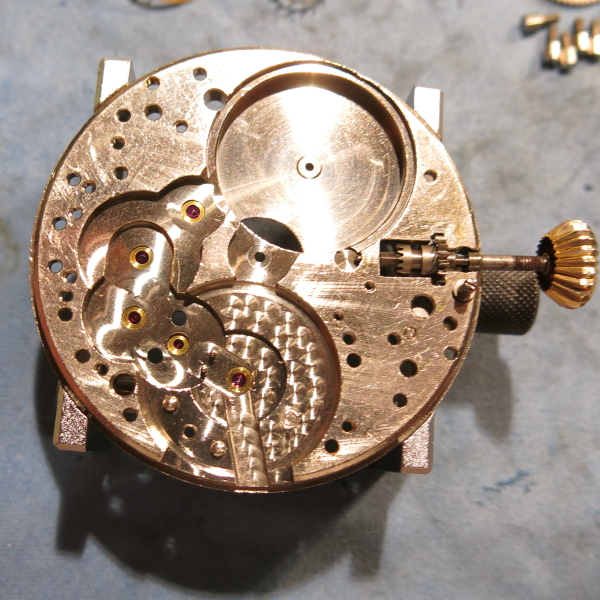 While everything is being cleaned, I'll turn my attention to the acrylic crystal.  It's a bit hazy and scratched but a few minutes on the polishing wheel will bring it back to new life. 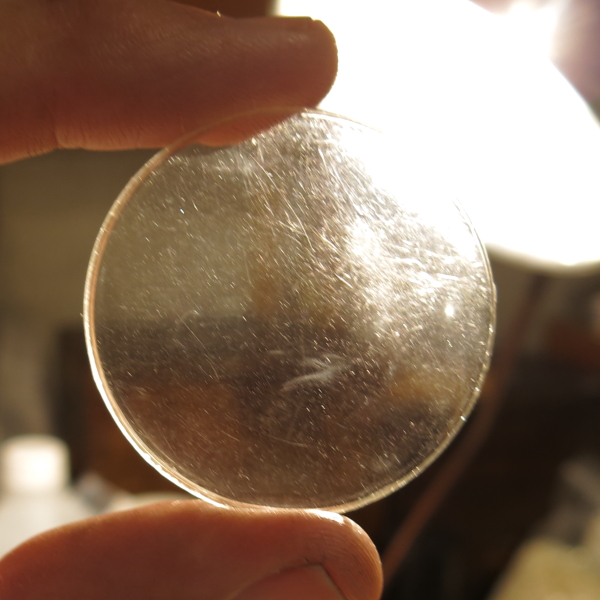 Laid out in the photo below, you can see that a pocket watch looks pretty much the same as any manual winding watch.  The only difference is the size of the parts.  Pocket watches are much larger and probably a little easier to work on. 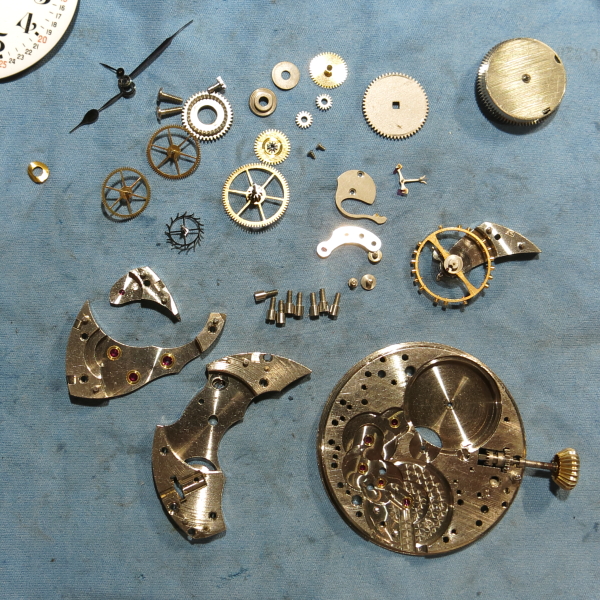 It's all back together now, just by putting each part back on in the reverse order I took them off.  The only exception is the balance, I put that on last after winding the watch a little. 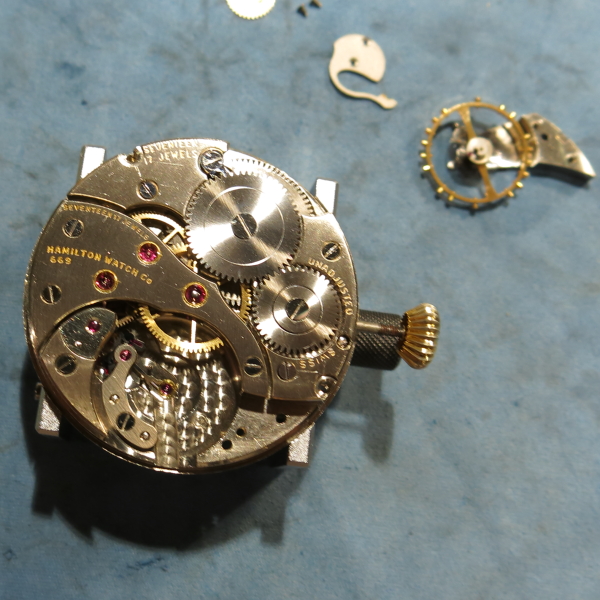 The watch is now ticking away so it's off to the timer to see how it's doing. 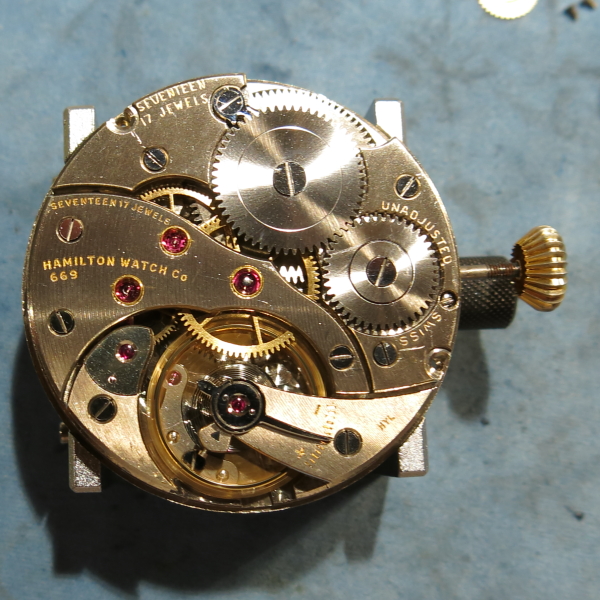 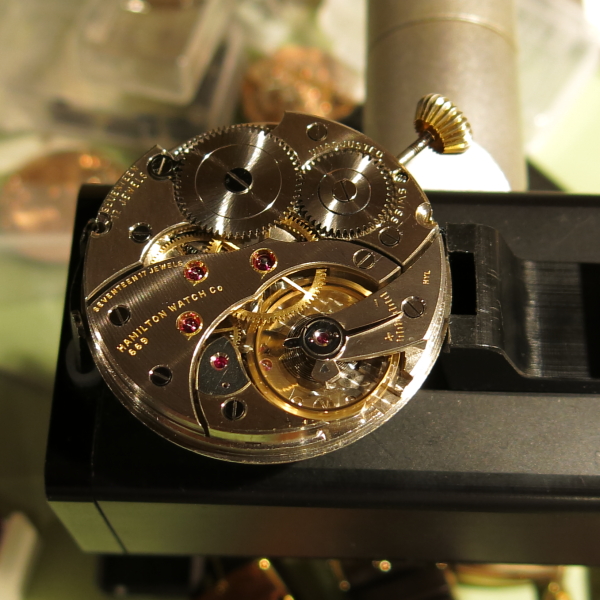 Looks like it's running fine.  A slight tweak to the regulator will speed it up slightly. 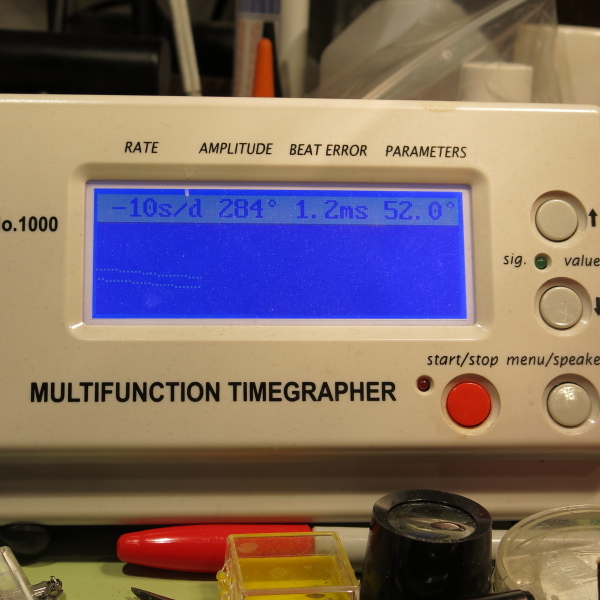 Now that the movement is running great all that's left is to put the dial and hands back on and tuck it back in it's case.  With a freshly polished case and crystal, this watch looks as good as it runs. 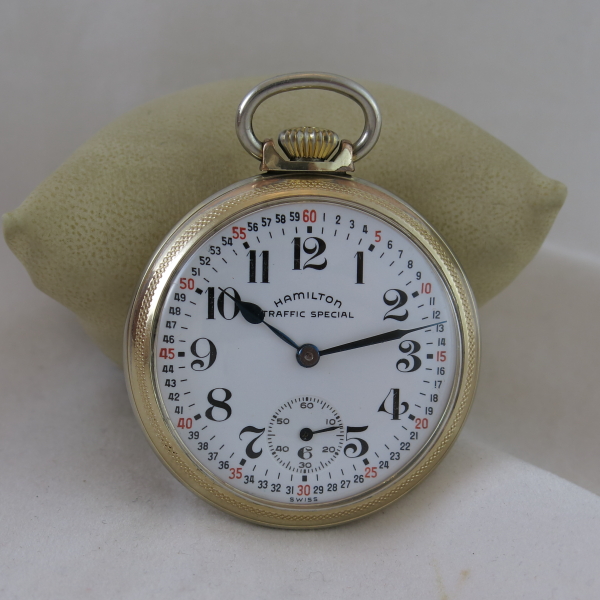