A lot of Hamilton collectors draw the boundaries of their collection at anything up to 1969.  1969 was the last year of US-manufacturing in Lancaster PA.  I suppose if you were to focus your collection only on US-made models then that logic would be well-founded.

However, a US-only collection would exclude every automatic model as well as any calendar model - as they were based on Swiss-made movements.

If you're going to include the automatic models (et al.) in your pre-1969 collection, you might as well include the 1970's models too.  As they are very similar and use many of the same movements.

If you really wanted to draw a firm boundary to you collection, you could arguably include anything with a beat rate of 18,000 beats per hour (BPH) - as that is the most consistent metric by which to define a "vintage watch", in my opinion.  It wasn't too long into the 1970's when Hamilton (and other) manufacturers started to utilized higher beat rate movements with 6 or 8 ticks per second (21,600 BPH  or 28,800 BPH respectively).  The higher the beat rate, the more precise the timekeeping - that's the logic anyway.  So something with 5 ticks per second has a precision of 1/5 or 0.20 seconds.  If you think about Olympic swimming or downhill racings times, precisions of less than 0.005 often determine who "won".

Of course, most people just need the "one Mississippi, two Mississsippi..." precision that a 18,000 BPH movement will provide. 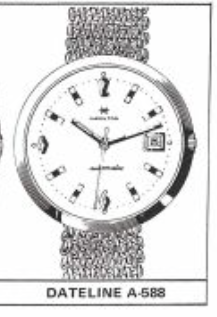 If you're familiar with Hamilton's nomenclature, you would know that a 500-series watch has a stainless steel case.  So the Dateline A-588 is a stainless steel model.  That might not seem obvious to the casual observer though - but 1971 catalog won't make it any clearer to you, as they didn't specify that the case was stainless steel.  Go figure.

The A in the A-588 means the model has an automatic, self-winding movement.

It's hard to tell what's going on with the bracelet in the catalog.  Some watches from this era have bracelets that are permanently mounted to the case.

I recently picked up a Dateline A-588 and I'm 99% sure that is what it is however it didn't come with a bracelet.  Instead is has lugs with a 14mm gap.  I suspect the special bracelet for this model had some some of hidden lug design but that's a total assumption.

In any event, my watch has seen better days and is in serious need of some love.  It ticks though - so that's usually a good sign. 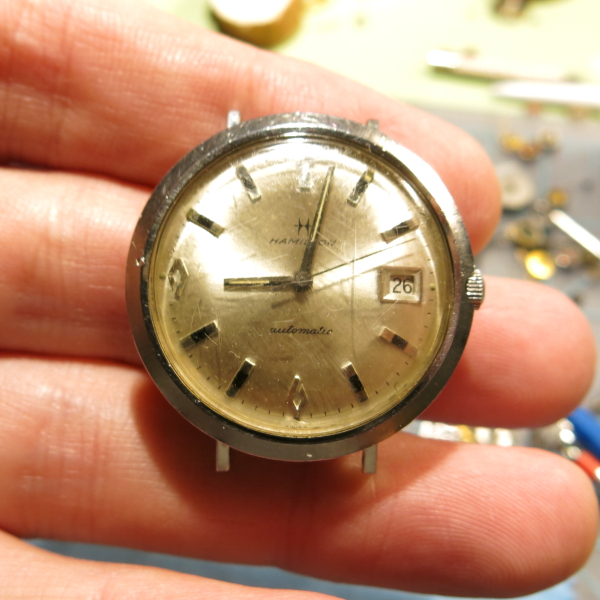 The case back is somewhat domed, a good indication that there's an ETA movement inside instead of a Buren micro-rotor. 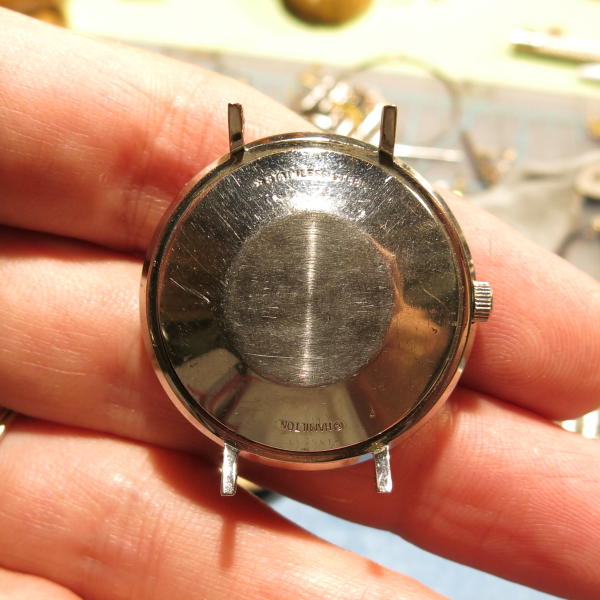 Sure enough, there's 17 jewel 694A movement tucked inside the one-piece case. 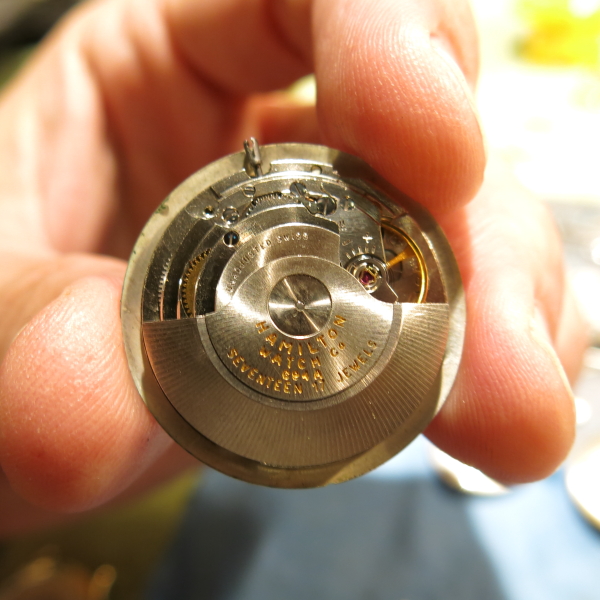 ETA models with a date wheel are easy to take apart but can be very challenging to get back together, mainly thanks to a couple of springs that help the wheel index and stay centered in the window of the dial.  Without the dial in place you can see that the hour wheel (in the center) moves the mechanism on the left so that when the hour hand reaches midnight the wheel should move to the next day. 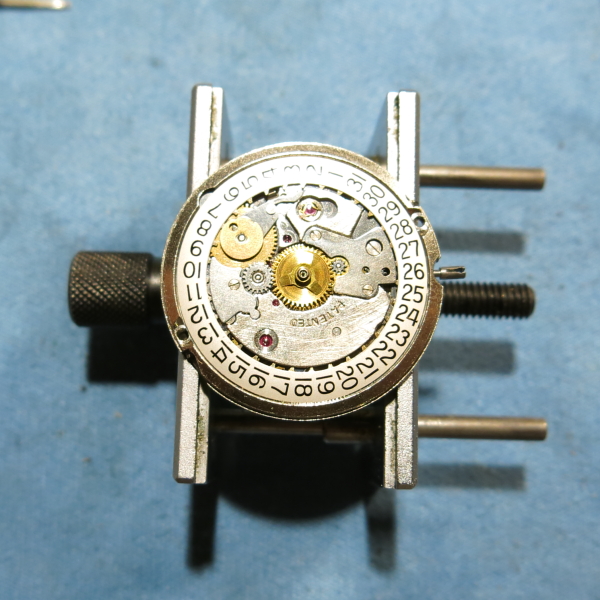 Everything gets taken fully apart and thoroughly cleaned.  If you want to see the step by step process, check out the "overhaul examples" on the menu on the right side of the screen. 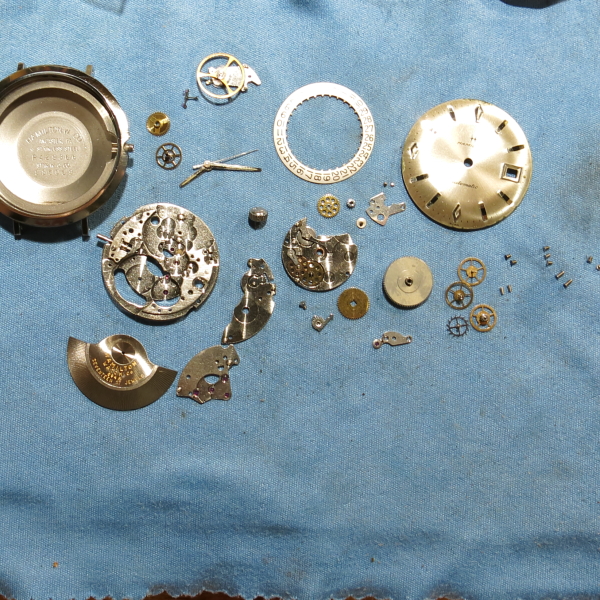 One of the challenging aspects of re-assembling this style of ETA movement is to get the four-wheel train bridge to seat properly.  When it's seated all four wheels will spin easily but getting all four wheels lined up requires a lot of patience and a delicate touch. 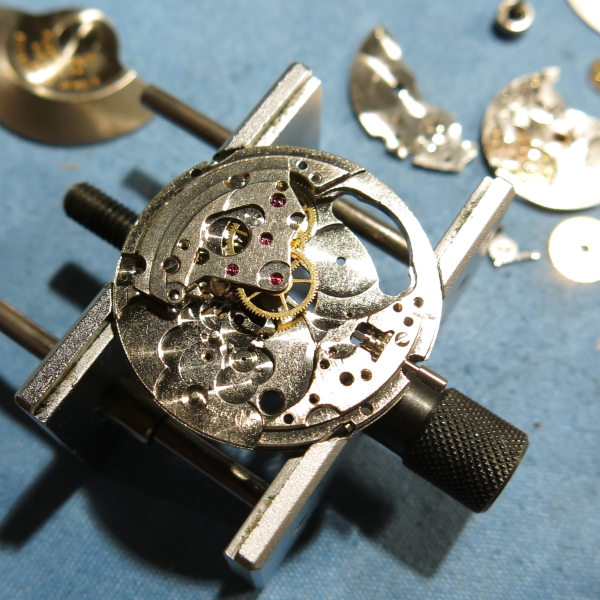 Once the train bridge is in place, I can install the pallet fork and the mainspring bridge.  All that's left to go on now is the balance assembly and then the watch should run again. 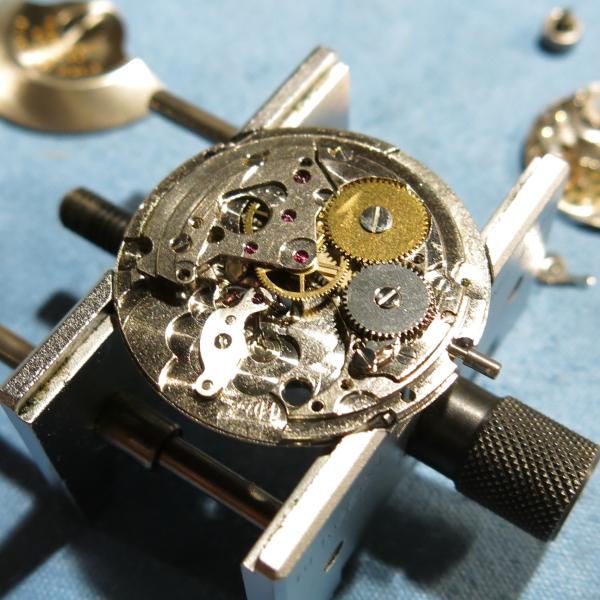 The balance is the most delicate parts of the watch - everything has to be perfect in order of it to keep accurate time. 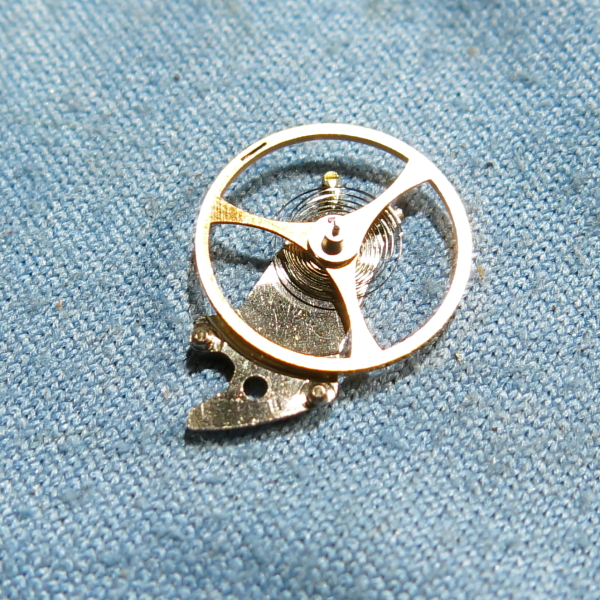 Okay - the watch is now running so I'll see what the timer has to reveal about it's performance. 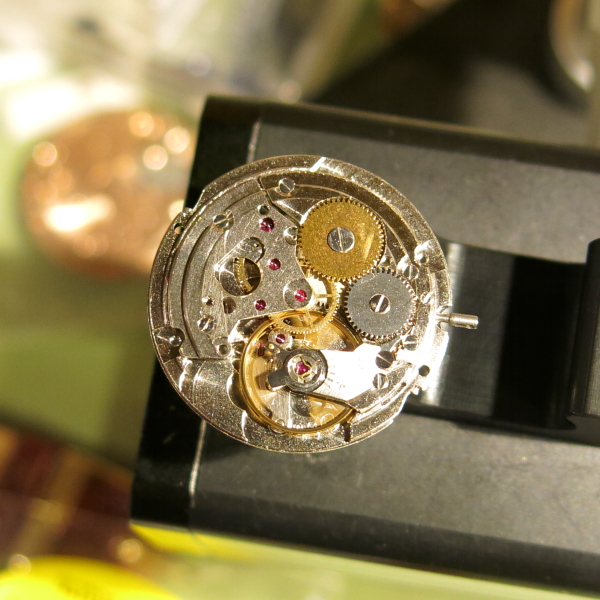 Ooh!  Something is making some noise inside... maybe some lint or a spec of dust somewhere. 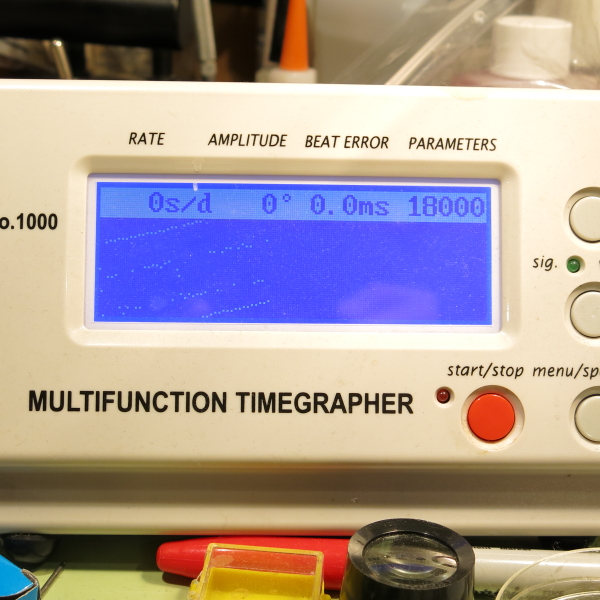 Getting warmer but still not quite there yet. 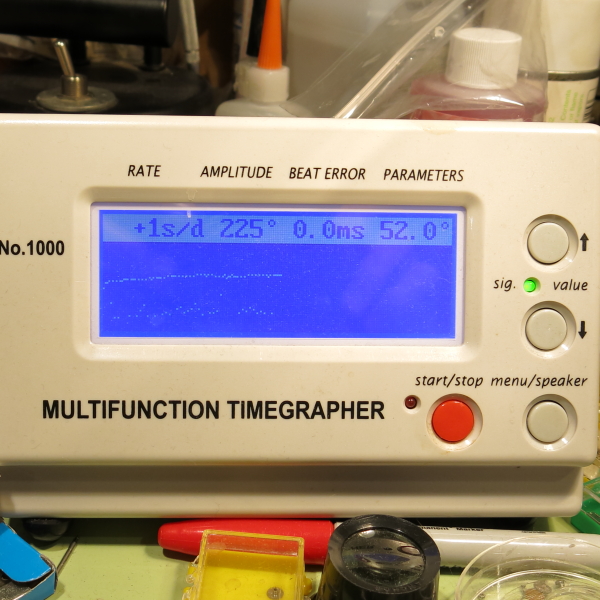 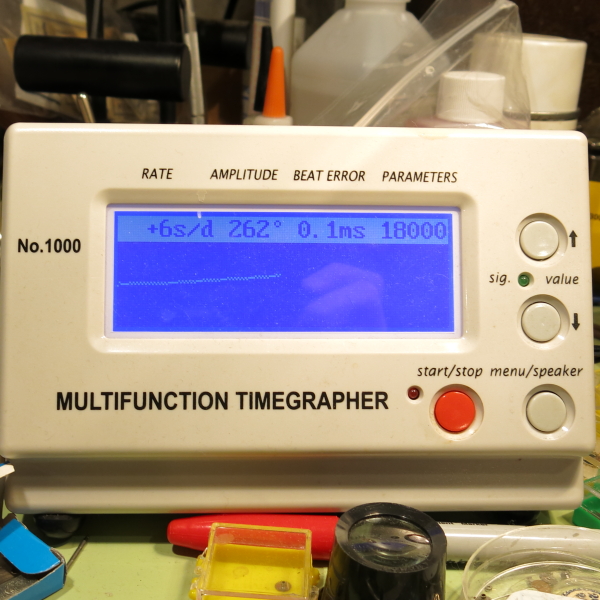 Once I get the date wheel and all the other parts back on the front of the movement, I can reinstall the dial.  I then need to put the assembly back in the case so I can use the crown to set the time to midnight.  Once I see the date wheel index I can set the hands at midnight... so the date will change at 12:00 or pretty close to it (it's never perfect). 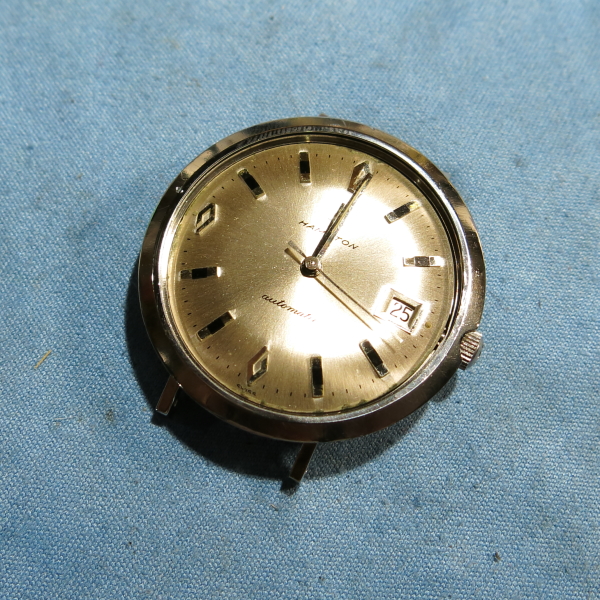 The old crystal had deep scratches and had turned yellow so I will install a new one.  30.6mm diameter should do the trick. 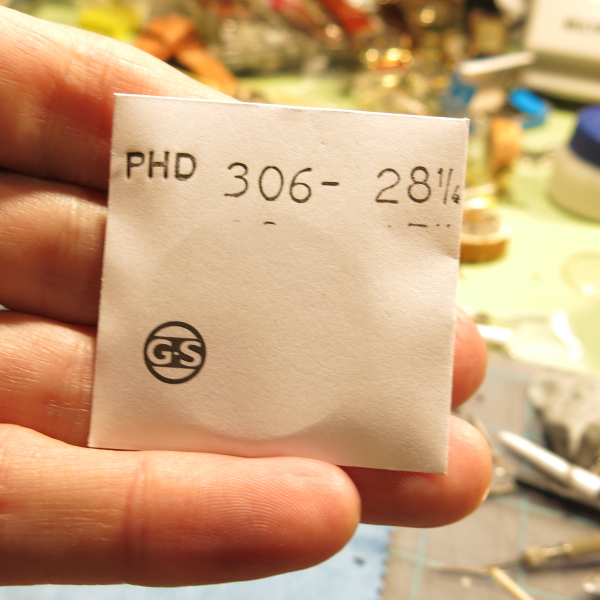 Here's the finished project with a 14mm mesh strap.  That's as close to original as I'm likely to get.  14mm is a bit narrow and it sort of has a feminine aspect to it but as vintage watch collectors know, "real men wear small watches". 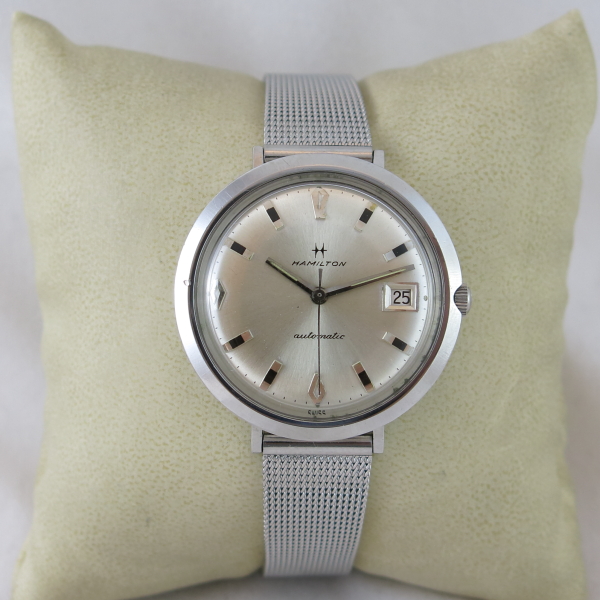