There's something about a big old pocket watch.   It could be that the loud ticking is soothing in a deep psychological way.  Perhaps it's because they are reminiscent of steam powered trains and model T cars.  Or maybe it's just the fact that they're still alive after a century of time.

Regardless, I really like old pocket watches even though they tend to be a bit ubiquitous and all look alike after awhile.  Believe it or not, Hamilton has a LOT of different grades to collect, although some are extremely hard to come by, especially after 100 years.

I recently acquired a nice 18 size pocket watch because I was the only one who bid on it.  It had been a while since I did a pocket watch and figured I could show it on the blog.  It's also the oldest watch I've done to date, having been made in 1902.  That's only 9 years after Hamilton first started producing watches. 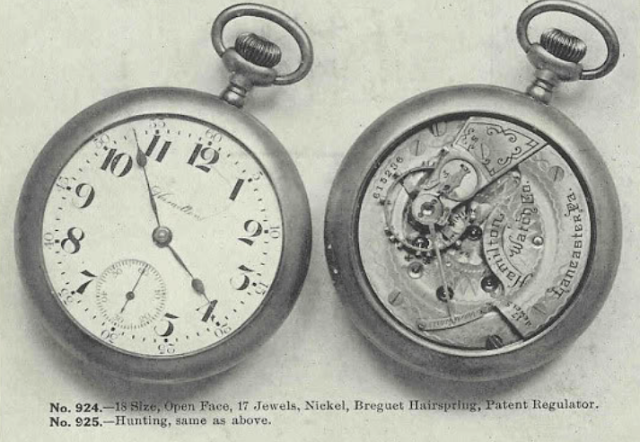 The 925 movement was first introduced in 1899 and it was produced until about 1912.  Back then you could pick the movement you wanted and the jeweler would case it in whatever case you selected.

The watch that I purchased had the 925 in an open faced case.  I suspect it wasn't originally purchased like this but it doesn't really matter to me.  If I had to guess, I bet the original case was damaged and it was less expensive to recase it in a generic open faced case than in another gold filled hunting case.

When it comes to pocket watches it's really all about the movement, then the dial, and then the case. 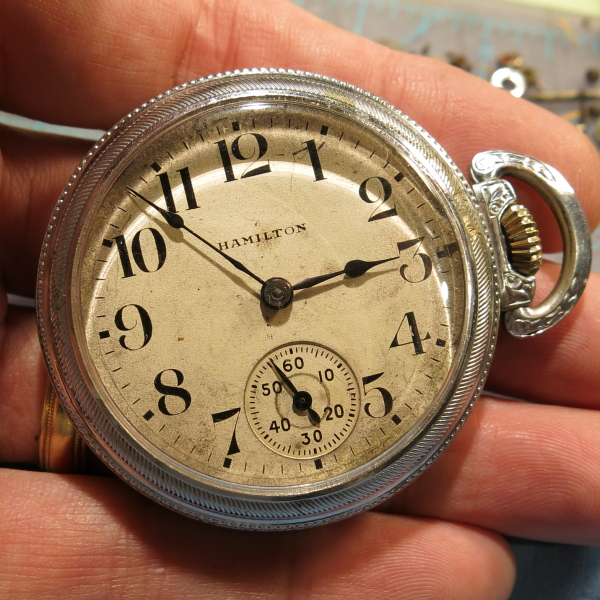 The case back has a pattern with an area intended for the owners initials.  It's funny that this watch has a gold crown while the rest of the case is silver colored. 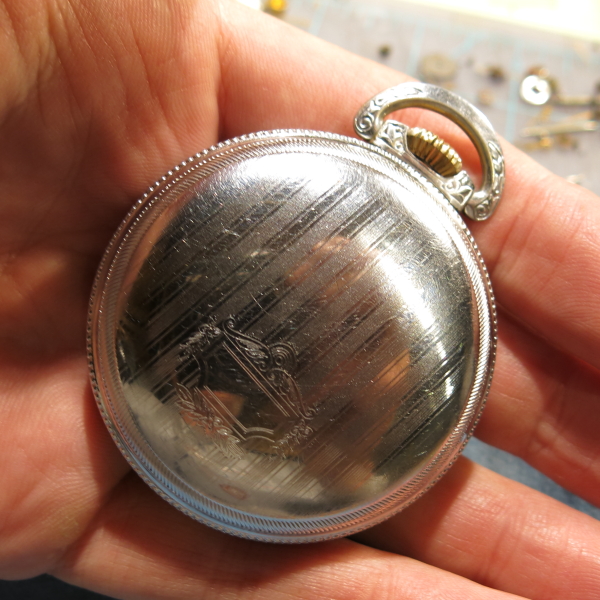 The movement runs, which is good, but you can tell from the dull brass color of the jewel settings that it's been a long time since this watch was serviced.  The jewel chatons should be bright and shiny. 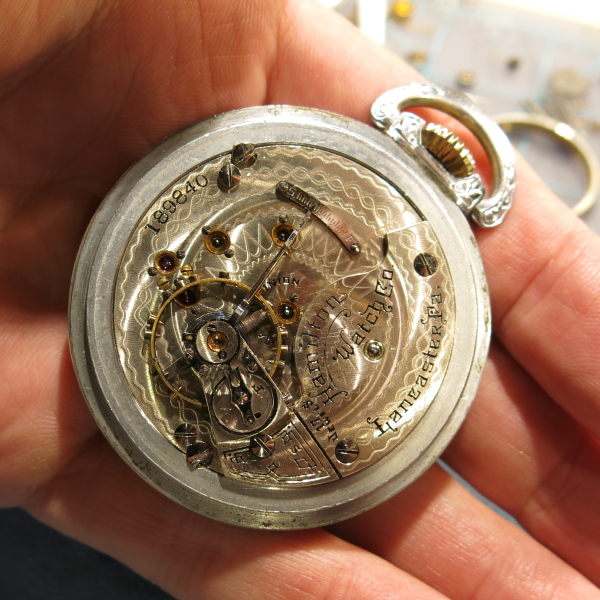 I'm not sure if this dial is original or not.  It's obviously old.  It's not an enamel (porcelain) dial, so there's no cracking or crazing to worry about.  You can tell by the lever sticking out at the 5 that this 925 is a lever-set grade.  So when you pull the lever out (like shown) the hands will move when you turn the crown.  When you slide the lever back the watch is in the winding position. 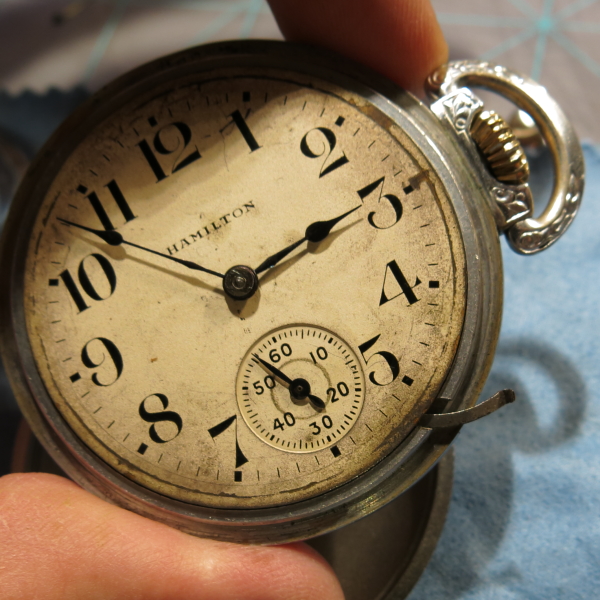 The back of the dial is unmarked and shows it's three dial feet. 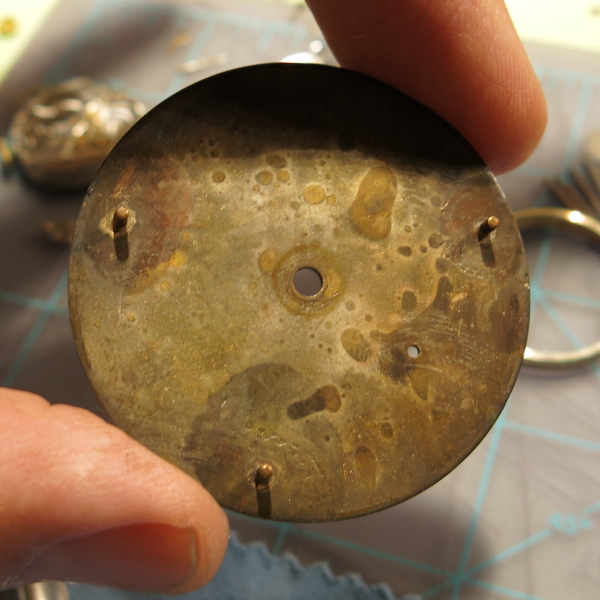 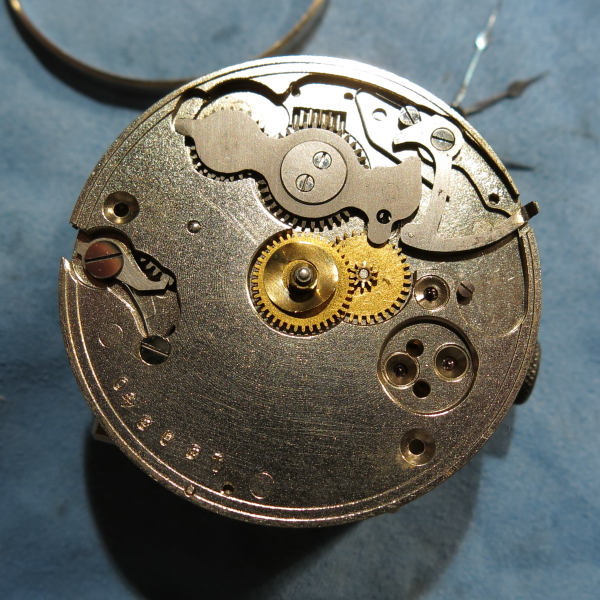 The one thing I don't like about full plate movements like the 925 is the balance is exposed on the back of the movement.  It's not precariously exposed when the cover is installed but when it's not covered it's very prone to getting damaged.  So it's the first thing I will take off.

One thing I like about these movements is everything is LARGE, at least compared with wrist watches.  The hairspring stud is held in place by a cover secured with two screws.  With one screw removed, I can rotate the cover to expose the blue hairspring stud.  That will allow me to separate the balance wheel from the balance cock supporting it. 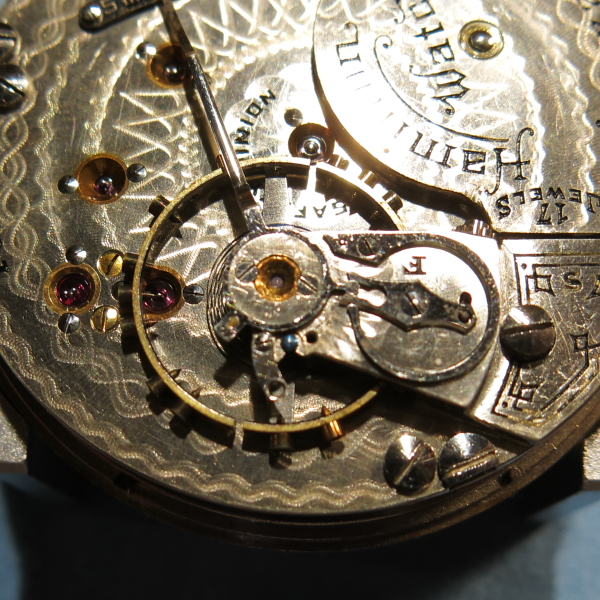 A full plate movement can be tricky to put back together because a single plate (bridge) covers all of the wheels, including the pallet fork, at one time.  In the shot below the plate has been removed.  So all of the parts can now come off. 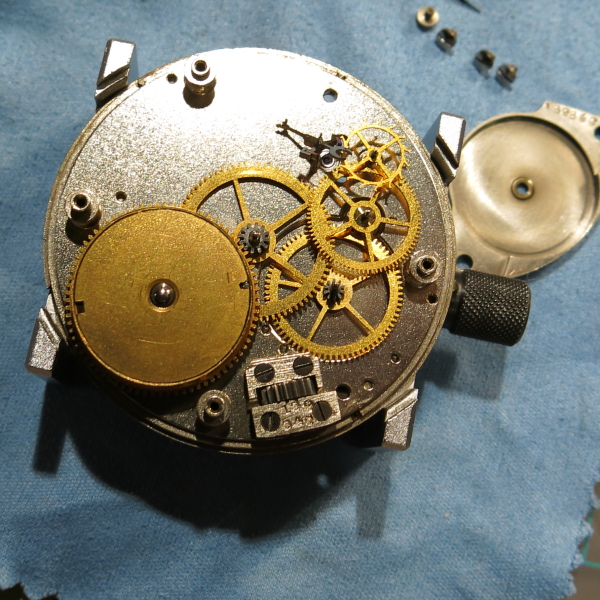 The 925 has a "motor barrel".  It's held on both ends by bushings and the silver wheel is the ratchet wheel.  When the ratchet wheel is turned by winding the watch, the arbor inside is turned.  The teeth on the gold-colored barrel then supply power to the gears. 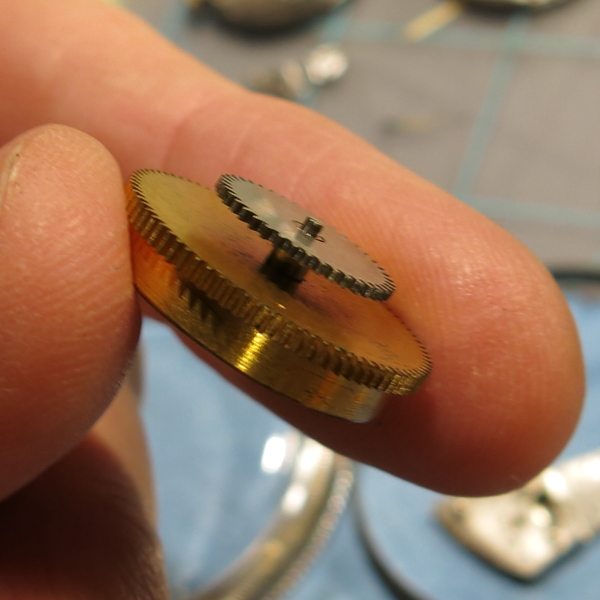 With the back freed of parts, I can flip the movement over and take all of the parts off the front too. 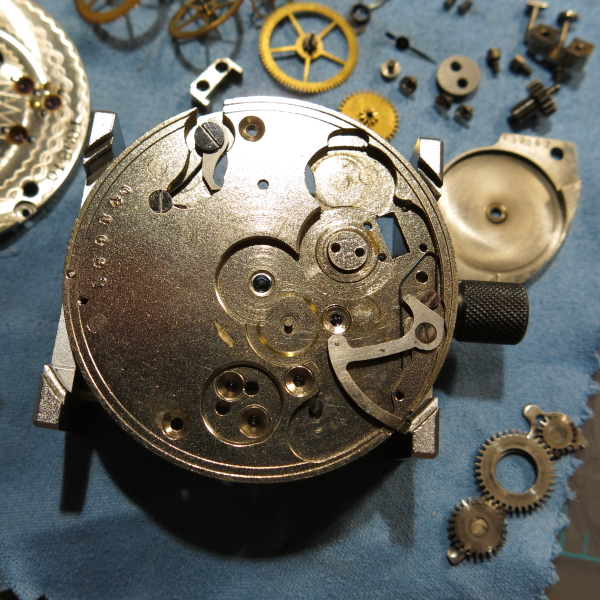 Everything is now cleaned and dried so all I just have to do next is put it back together with fresh lubricants. 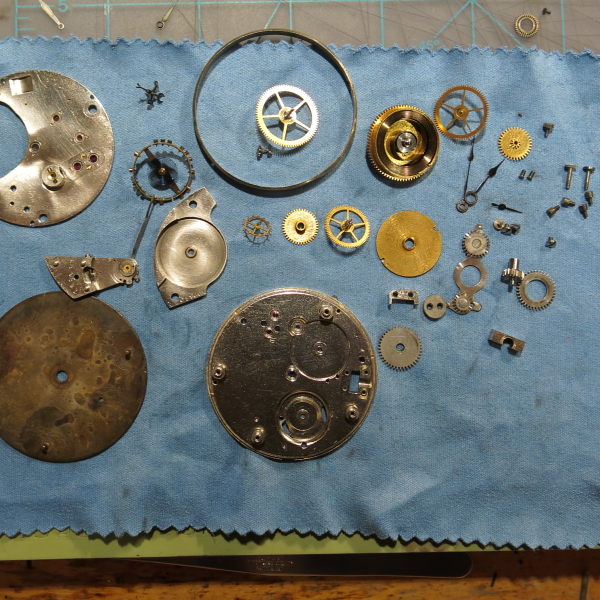 Here's a shot of the back plate without the barrel bridge.  There are two tricky parts to assembling the movement... one is to get all the wheels to line up in their respective jewels and the other is to get the pallet fork to pass through the opening in the recessed area where the balance goes. 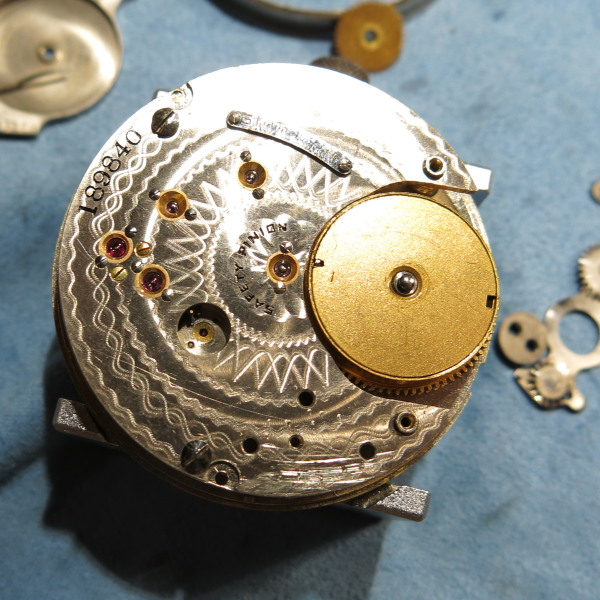 Getting all the parts to line up requires poking and prodding from this direction.  When all the parts are aligned, the plate will drop right into place.

An 18 size movement like this barely fits into my movement holder. 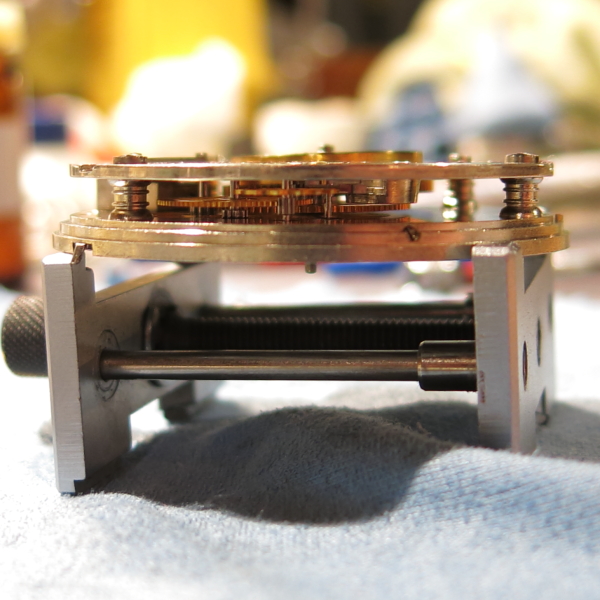 All the parts are reinstalled on the front.  There's a thin blue spring on the right that needs to go under the bridge covering the wheels - that's the only tricky part to putting the dial-side back together. 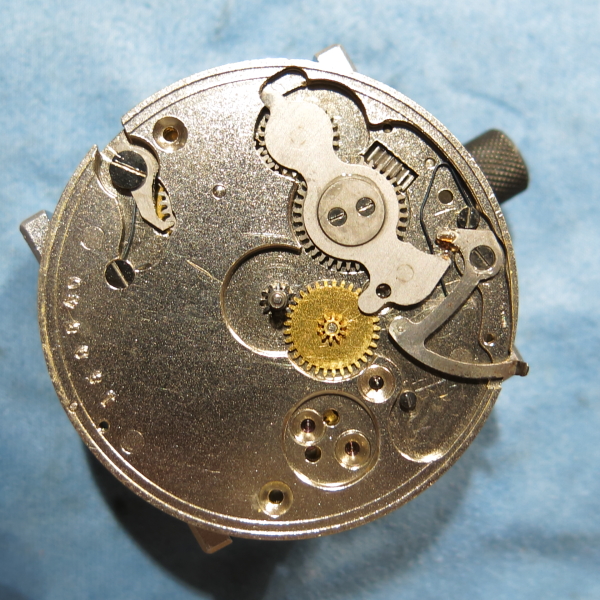 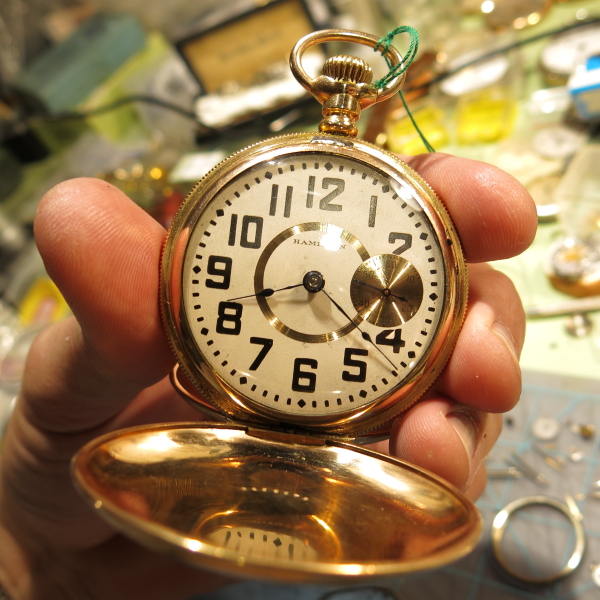 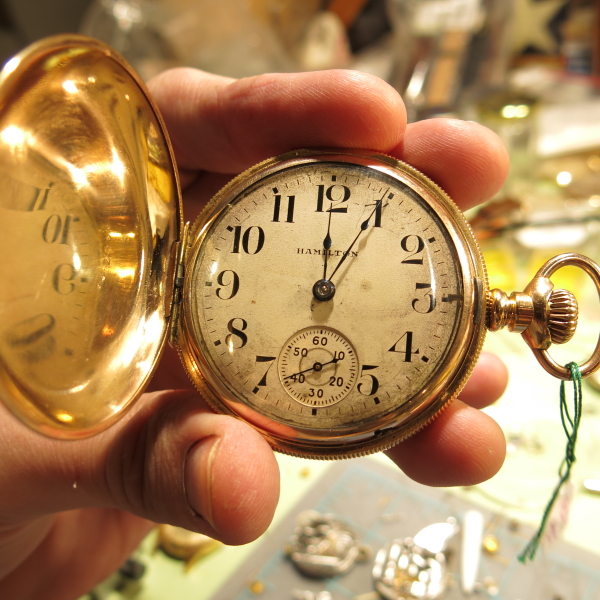 I need to reinstall the movement into the case in order to wind the watch.  Once power is restored to the mainspring, I can install the balance and it should start running. 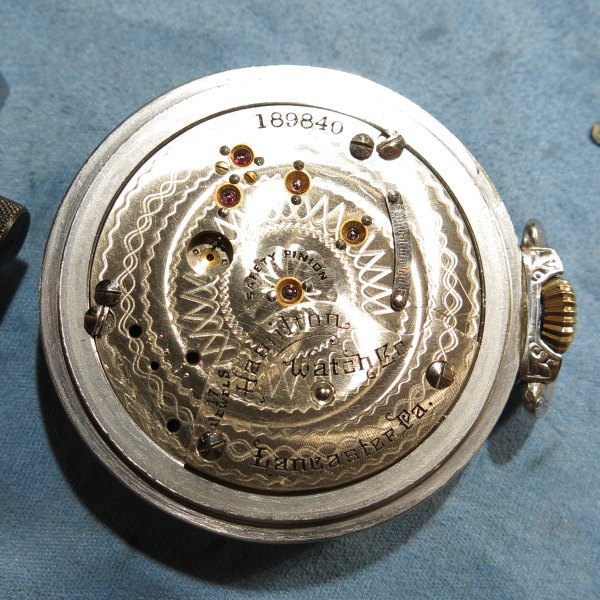 There - it's all back together and running.  Now to see what the timer thinks of it. 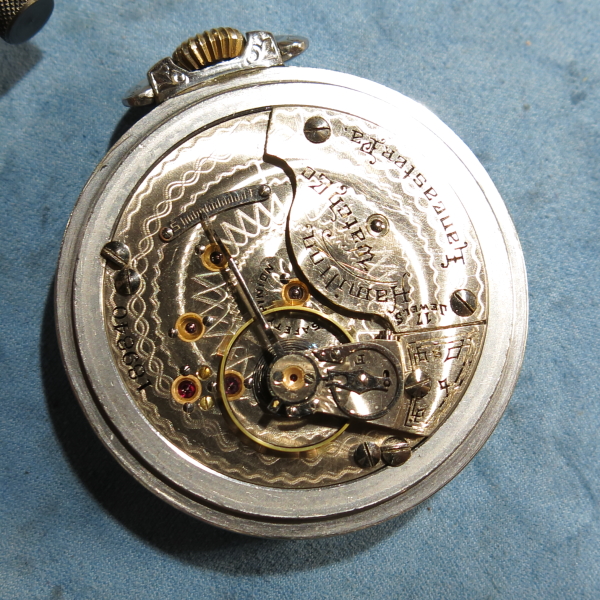 Well, it's running a little slow but the amplitude is great.  The beat error... not so much.  7.3ms is a bit too high.  Fixing that will require removing the balance and then guessing which direction to adjust the hairspring.  The goal is to better align the balance impulse jewel with the pallet fork and reduce the beat error. 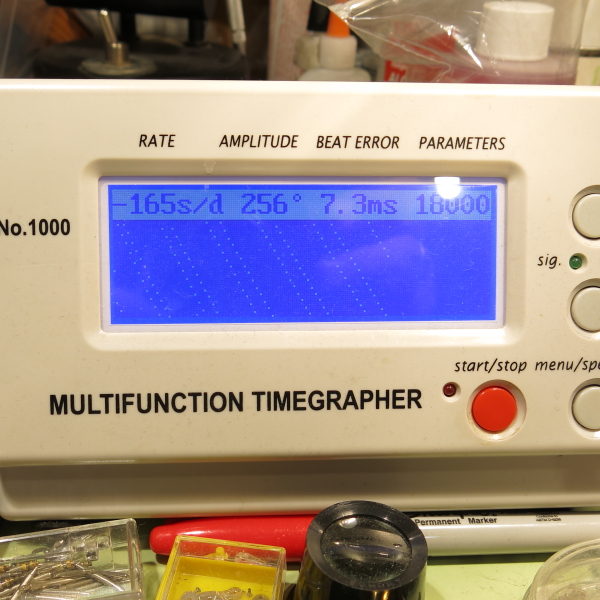 How's that for a good guess?  The beat error is down to 1.7ms - that's more than acceptable in my book.  Now I just need to tweak the regulator so the speed comes up a little. 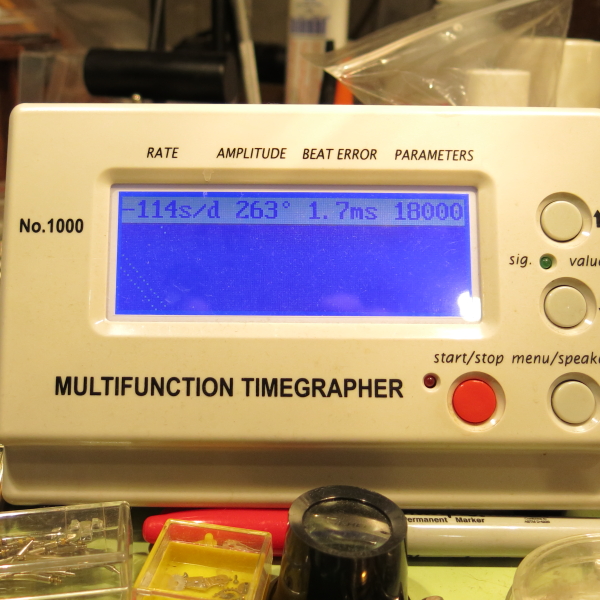 There, it's not going to get much better than that. 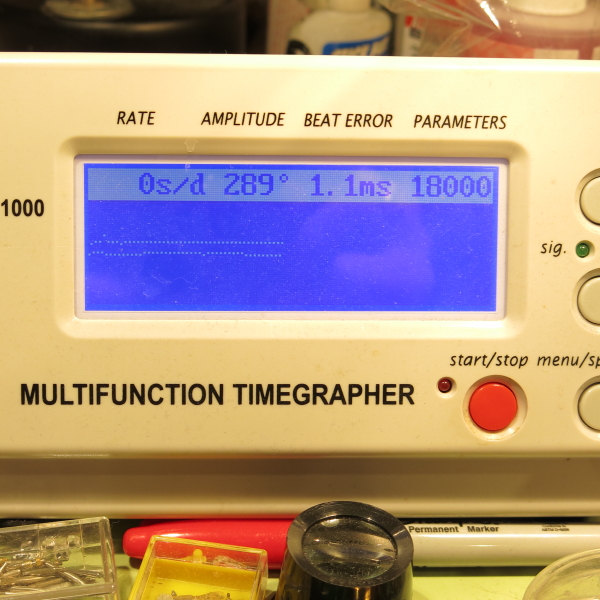 Here you can see the finished project.  It looks much better with a dial with an open faced orientation.  The gold highlights on the dial go nicely with the gold crown too. 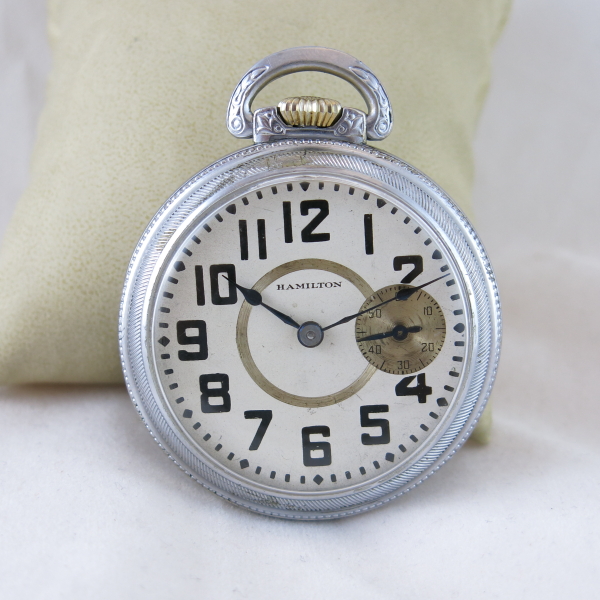 And here's the movement side.  Notice how much brighter the jewel settings are now. 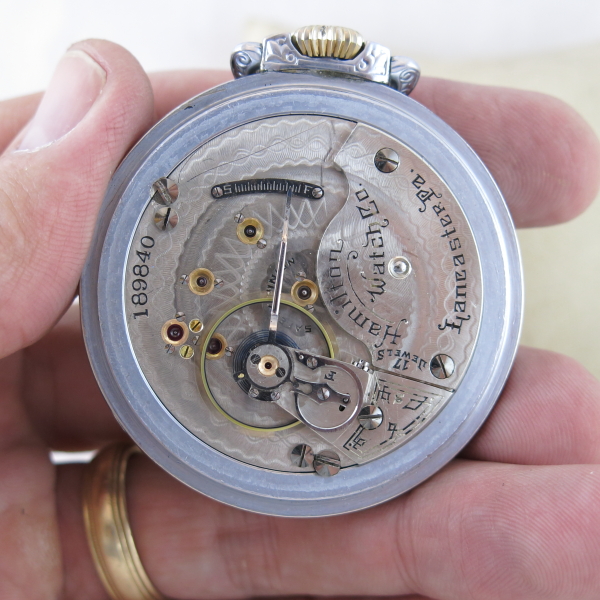 Not a bad looking watch for being 113 years old.  Don't you think?