Hamilton made Hamilton Illinois-branded models from 1953 through 1955.  Hamilton Watch Co purchase Illinois Watch Co in the mid-1920's.  Illinois was an excellent brand, on par with Hamilton, and even though it had been a couple of decades, I guess Hamilton still saw value in the Illinois moniker.   So they reintroduced it in 1953 on a new like of watches with Swiss-made movements.

I've heard a couple of possible reasons for the use of the Illinois label... one was simply, "use it or lose it".  The had to use the trademark or lose the rights to it.  Another reason was a concern that if Hamilton introduced models with Swiss movements, that the panache of the Hamilton brand would be eroded.  So using Illinois as the brand was a good way to test the market.

I think that latter explanation makes sense because in 1953 the watches were branded "Illinois" and by 1955 the watches has "Hamilton Illinois" on the dial.  Then in 1956 Illinois was dropped entirely and some of the same Illinois-branded models became Hamilton-branded models with a new model name.  In many situations, -B models used up excess Illinois-branded movements and then the non-B models used Hamilton branded movements that were still Swiss-made. 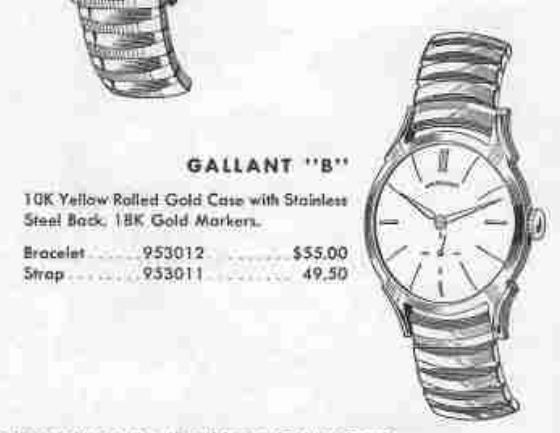 If you look closely at the shape of the lugs and case on the Gallant-B, it looks a lot like the Illinois Debonair G.  Even the bracelet is a match.  However the dials are obviously different.  The Gallant-B is a one-year wonder and was made only in 1956.  There is no Gallant. 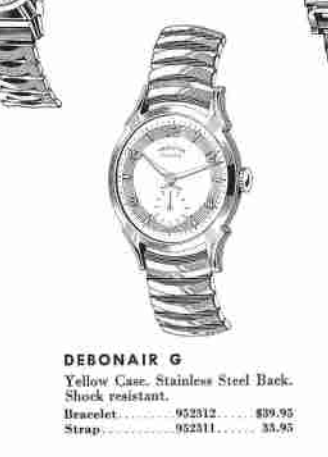 So as I said above, I recently came upon a "tweener".  It looks like the Gallant B but it's still got Illinois on the dial. 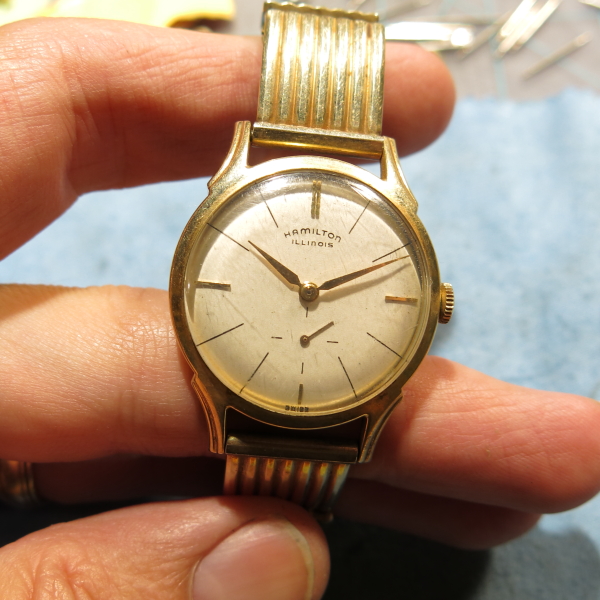 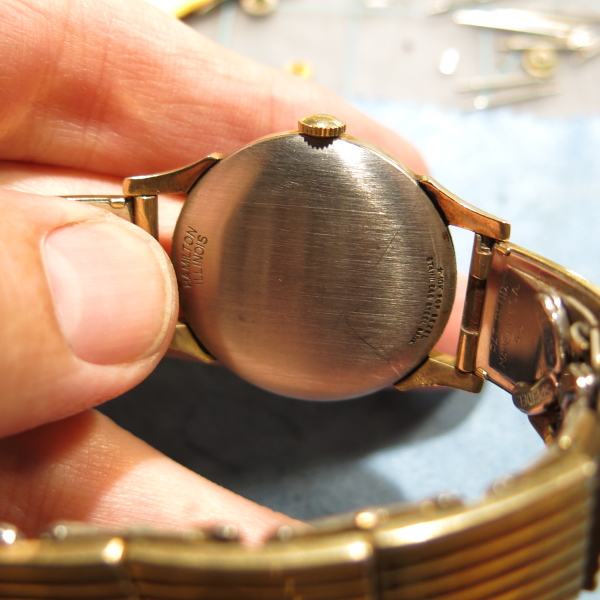 The dial looks great and there's no indication that it's not original. 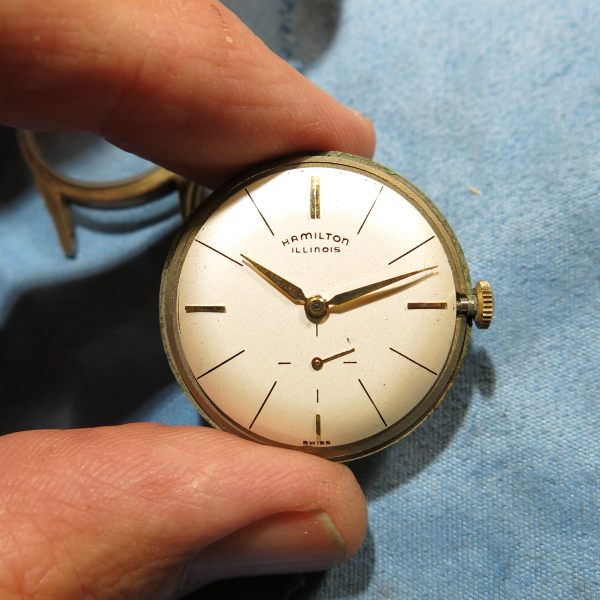 The inside of the case back often has a lot of info and many times the 4-digit number in an Illinois case represents the specific model. 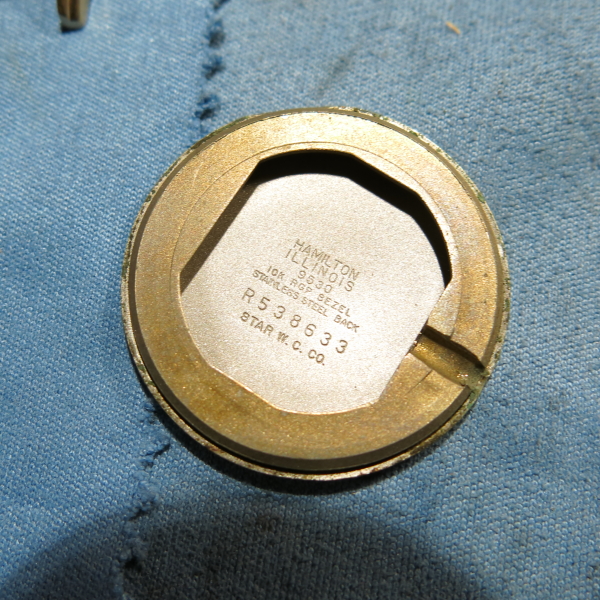 It's interesting that Hamilton didn't identify the grade that Illinois-branded movements are.  The TXD on the balance cock is actually the import code for Illinois.  Swiss-made Hamilton movements have a different import code.  This specific Illinois movement is an ETA 1220.  So if it needed any parts I would order parts for an ETA 1220, rather than for an Illinois movement. 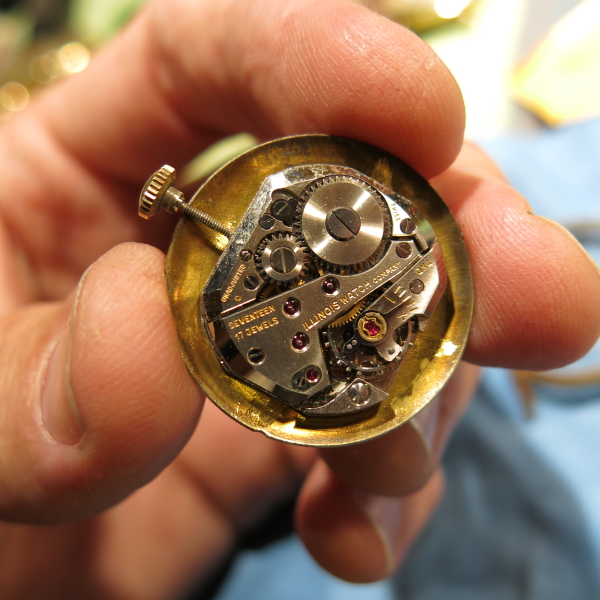 Without the dial in the way, you can see the dial-side of the main plate has a lot of familiar parts.  Even the shock jewels for the balance look like the same design Hamilton used on their American-made 730, 735 and 770 movements. 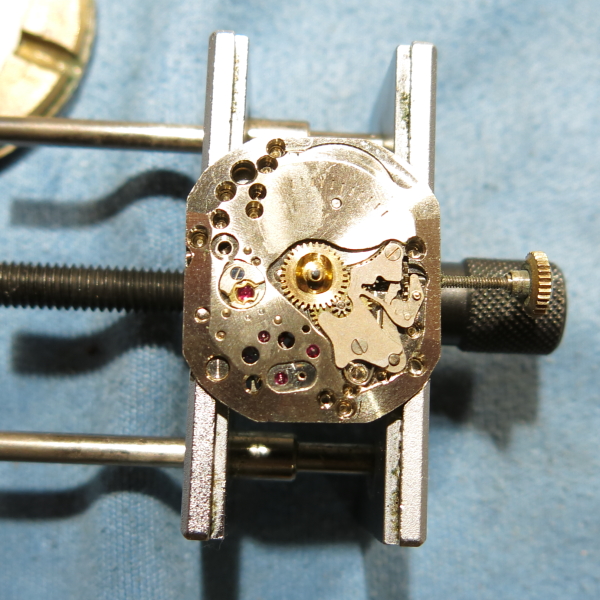 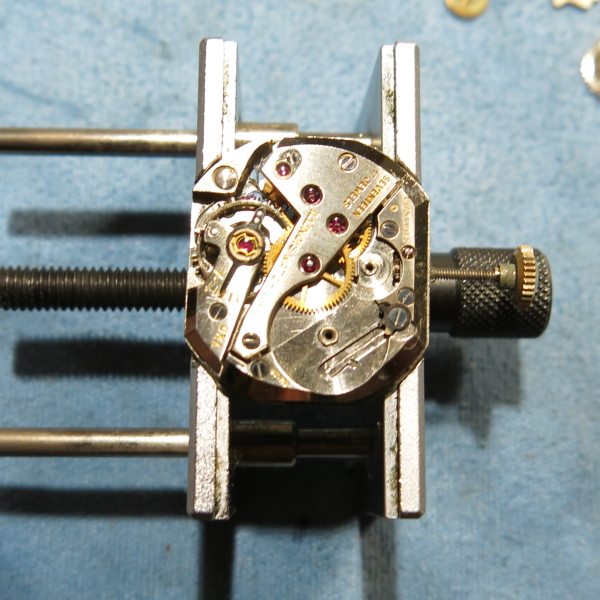 Removing the bridges reveals the gear train inside.  I have to pull the balance in order to get the 4th wheel and escape wheel out. 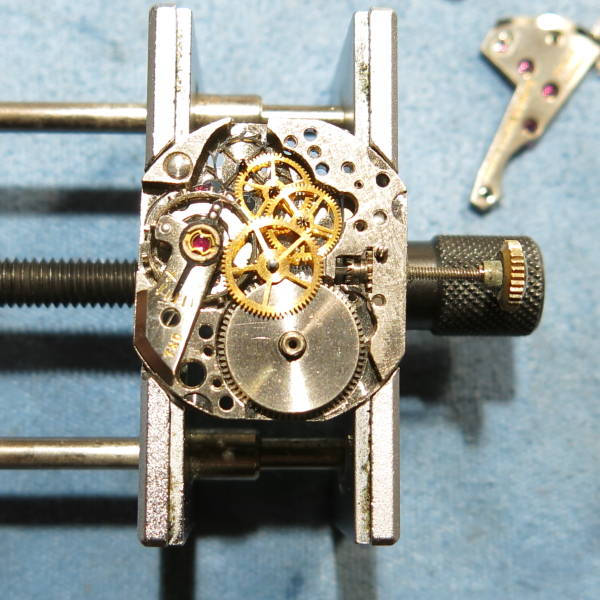 With the balance out of the way you can see the ETA stamp and 1220.  This is the typical place to look for info when you're trying to identify a Swiss-made grade. 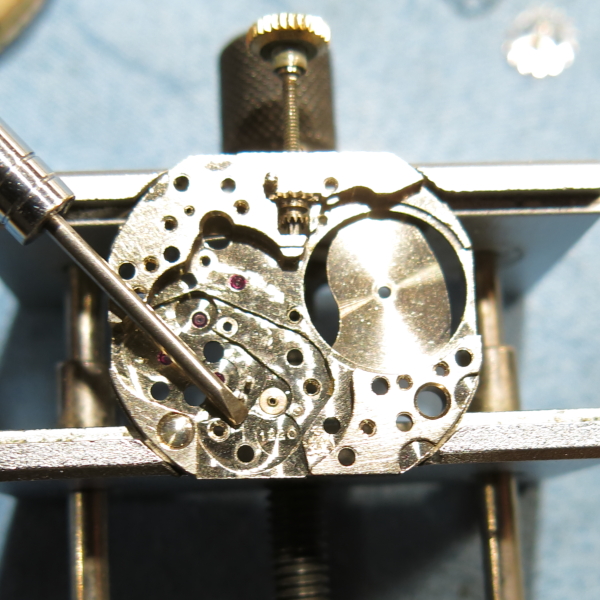 Everything is cleaned and dried.  While the parts were being cleaned I polished the crystal.  It cleaned up pretty well but is a little cloudy and has a couple of minor, but deep, scratches.  So I'll replace it. 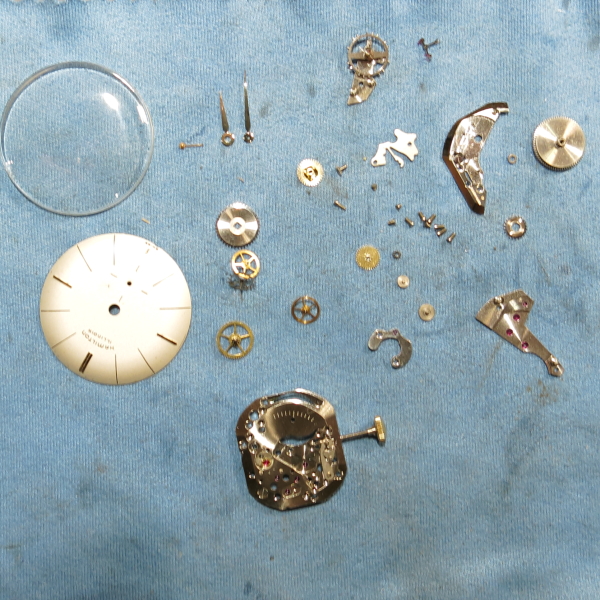 Everything is reassembled with fresh lubrication.  Now it's off to the timer to see how well it's running. 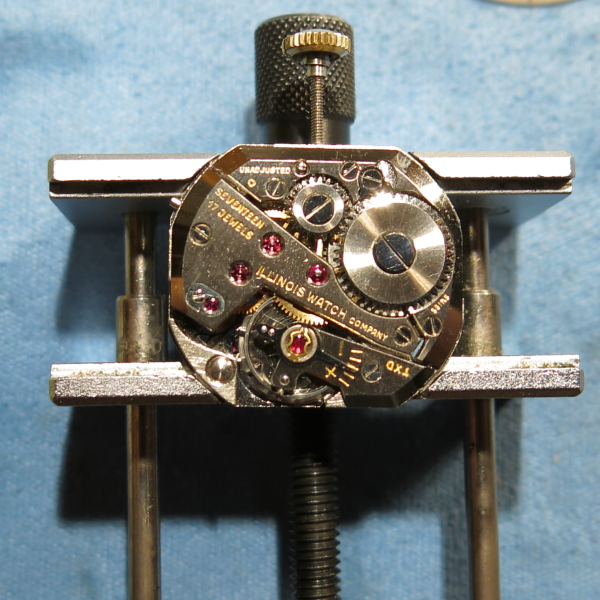 About a minute and a half fast per day.  A tweak to the regulator will slow it down 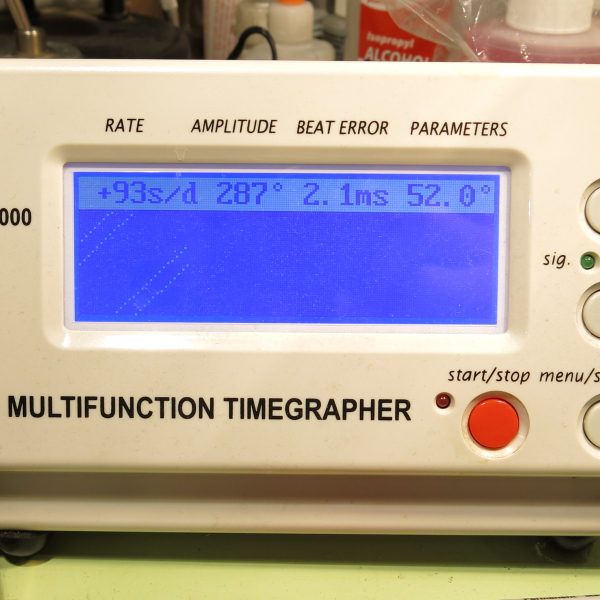 There, that's more like it... 16 seconds fast per day.  I should slow a little as it runs. 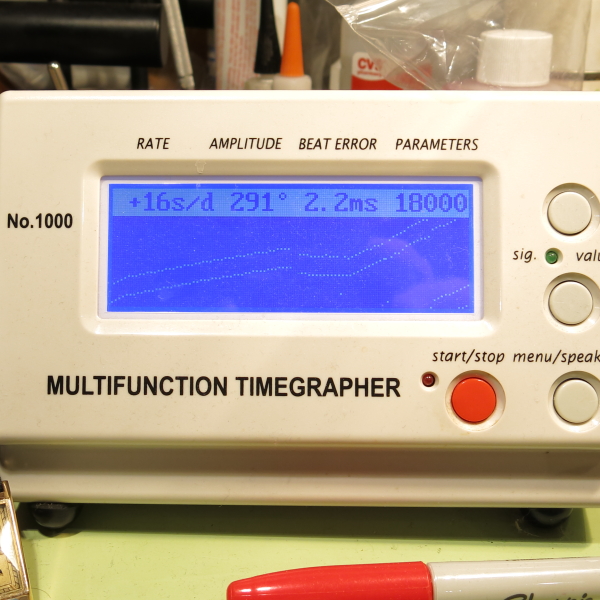 A new PK-style crystal in 28.3mm will do nicely to help showcase this newly refinished watch. 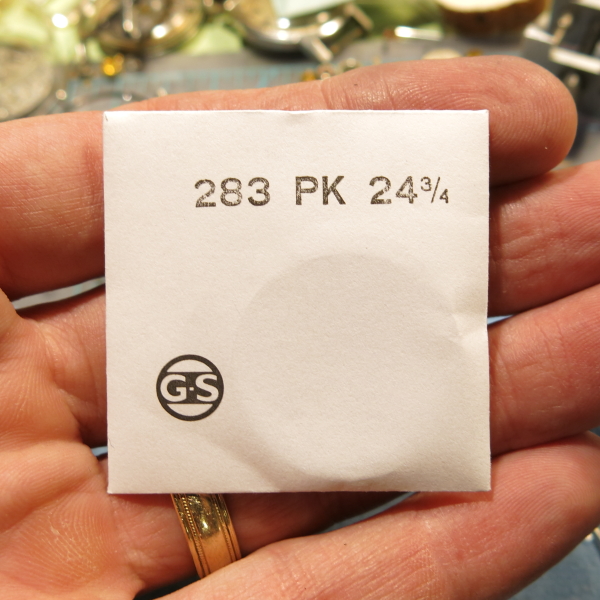 And here's the finished project.  Is it a Gallant B or a mysterious non-calaloged Illinois model?  My money is on Gallant B. 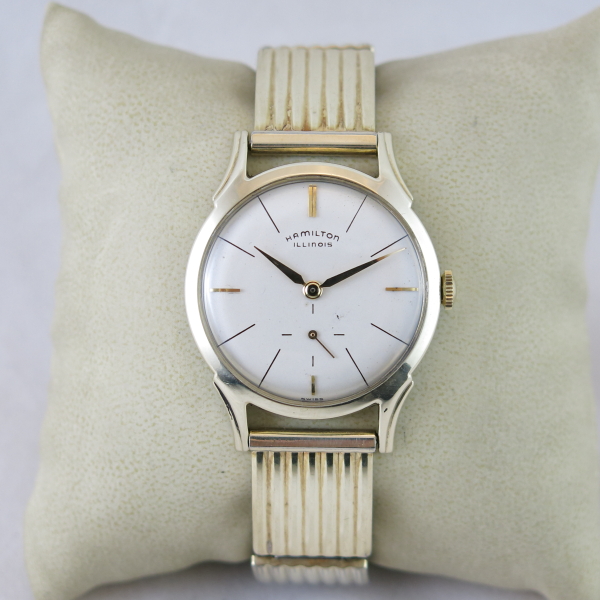