If you've followed this blog a while you have probably seen that Hamilton's first automatic models were actually a part of the Hamilton Illinois brand.   Hamilton acquired the Illinois Watch Company in the late 1920's and the older Illinois watches are highly collectible.  They are certainly on par with Hamilton watches from the same era and Hamilton even adopted one of the Illinois 12/0 sized movements for use in Hamilton models in the early 1930's.  The Great Depression brought the demise of the Illinois line until the brand was briefly reintroduced about 20 years later. 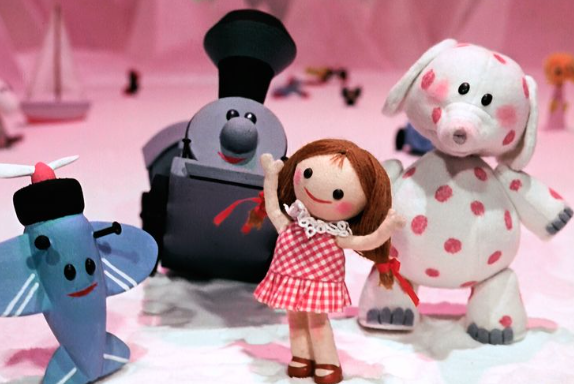 Hamilton had a couple of Illinois-branded automatics with a power reserve meter, or wind indicator as it's sometimes called.  The models were called the Signamatic A and Signamatic B.

The Illinois line was produced from 1953 through 1955, after which it was just absorbed into Hamilton's line up.  I guess the world didn't stop spinning because Hamilton offered Swiss movements - so executives agreed to use the Hamilton name on all models.

In 1956 Hamilton introduced a new line of automatics called the Accumatic.  One of the first entrants was the Accumatic II.  It featured a Hamilton 672 movement based on an ETA 1256 grade. 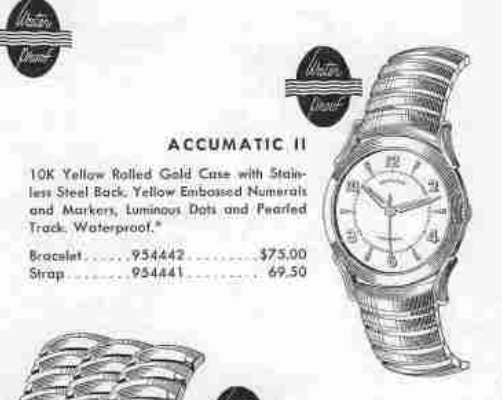 Hamilton must have had an abundance of imported Illinois movements so a lot of 1956 models have Illinois branded movements inside.  Most of the time the model with an Illinois grade is called a "-B" model.

Well, I've seen a good many uncatalogued Hamilton automatics with a reserve meter and I bet you have too.  You don't see them every day but they are not uncommon.  I finally landed one and I think it looks the most like an Accumatic II.  Perhaps it should be called an Accumatic II-B, since it uses an Illinois-branded movement... the same grade used in the Sigmatic models.  I'd be willing to wager it was only available in 1956 and was used to exhaust the remaining inventory of movements on hand in Lancaster. 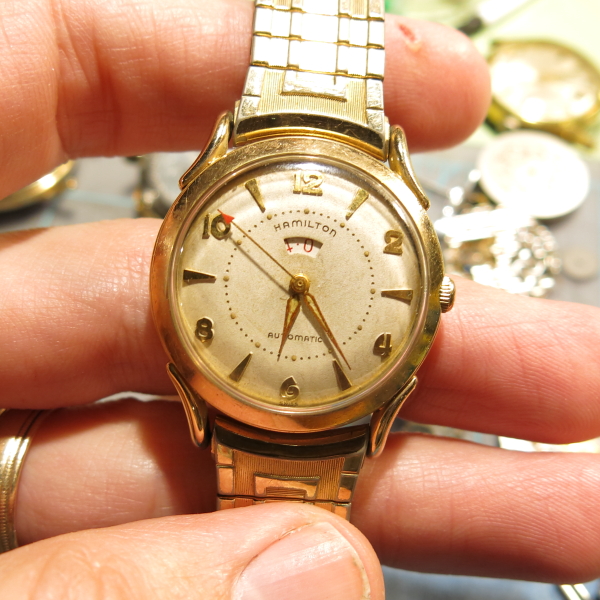 The case is definitely an Accumatic II case.  There's no doubt about that.  The dial is very similar to the Accumatic II but if you've got an eye for details you'll see the fonts of the numerals are a little different, as are the style of the hands.  Here's a photo of the Accumatic II for comparison. 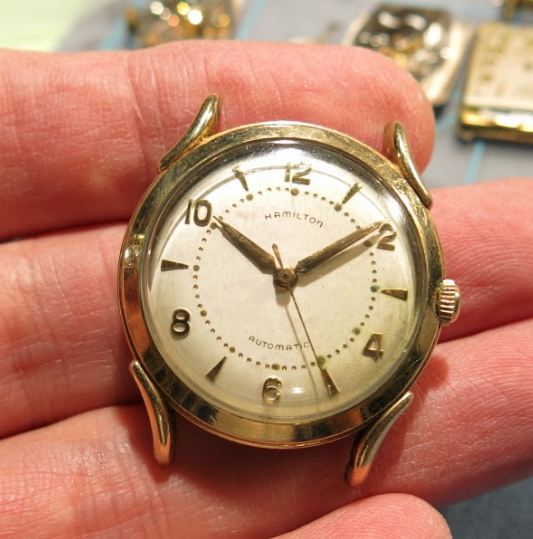 Anyway, the case back is stainless steel and is easy to unscrew and open. 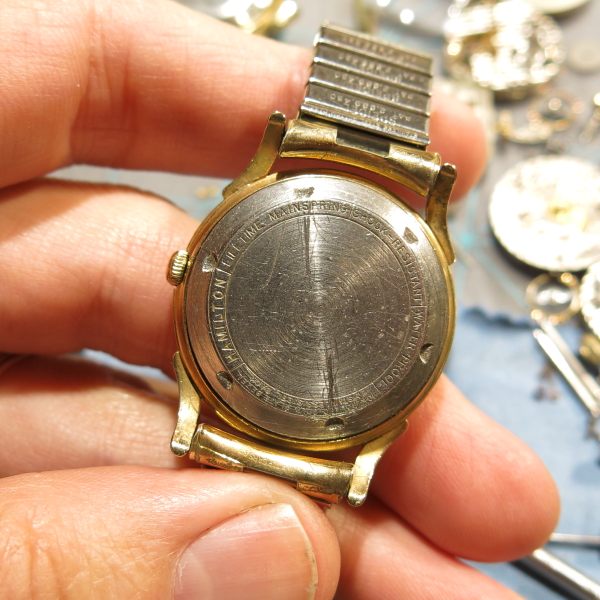 The Illinois-branded movements didn't get special names.  You'll often see them referred to as a "TXD", as seen on the balance cock.  That's actually the import code for Illinois and all Illinois movements say TXD on the balance cock, regardless of calibre.  Usually the caseback has a number on it that indicates the model.  But not this case (pun indended).

Looking at the movement below, there's nothing on the reverse to make you suspect this watch has a power reserve complication.  It looks like a garden variety ETA 1256 and if you look on eBay for "ETA 1256" you'll find that it was used by many different watch brands. 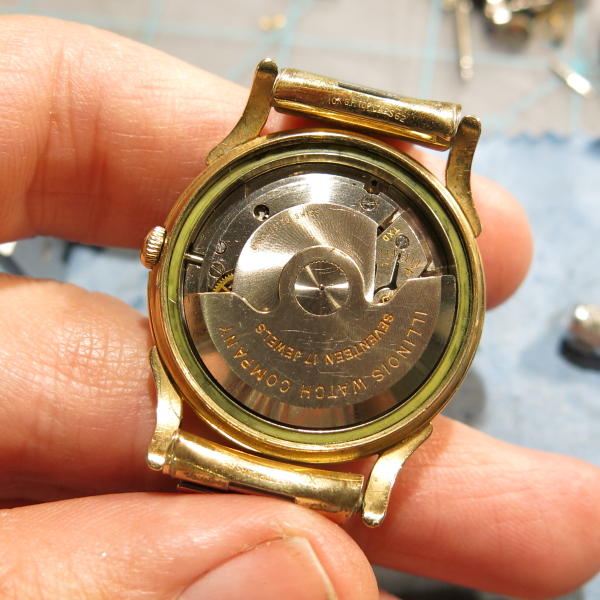 The watch case is clearly a Hamilton branded case. 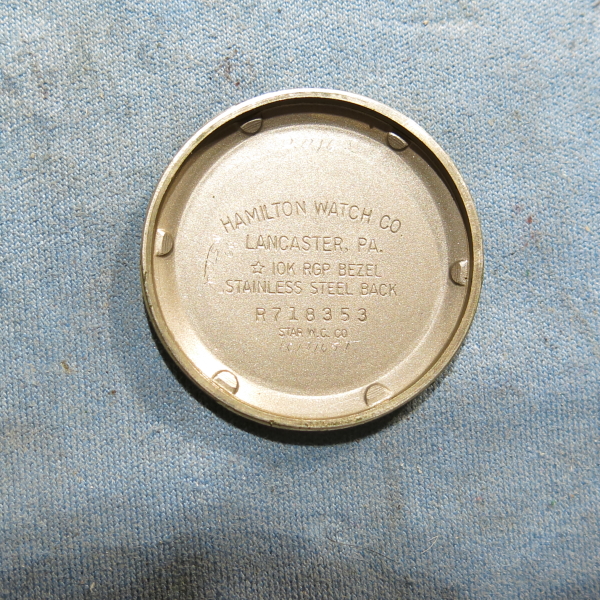 Removing the dial reveals a fairly unremarkable main plate.  That's because it's covered by a ring that supports the reserve wheel.  The only point of interest is that there's a screw missing at 2:00. 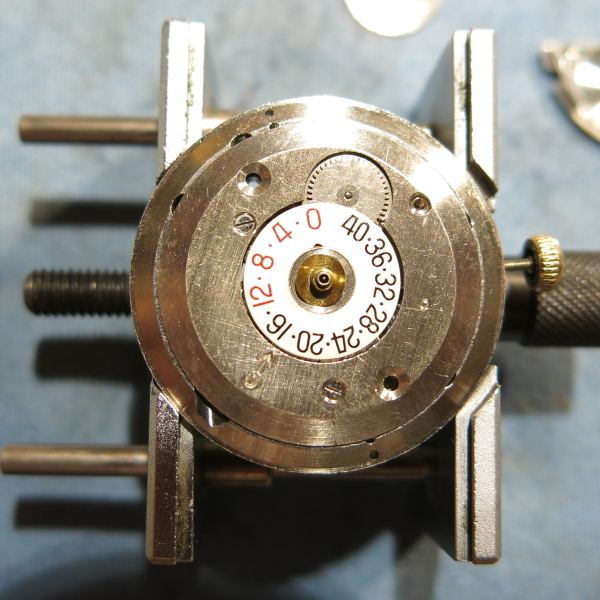 Once you lift off the reserve wheel and spacer ring, you can see the main plate is fairly complicated with a series of gears and pinions to transfer the motion of the mainspring barrel to the reserve wheel.  When the watch is fully wound it will show 40 hours and slowly work it's way down to zero as it runs... as long as you don't wind it. 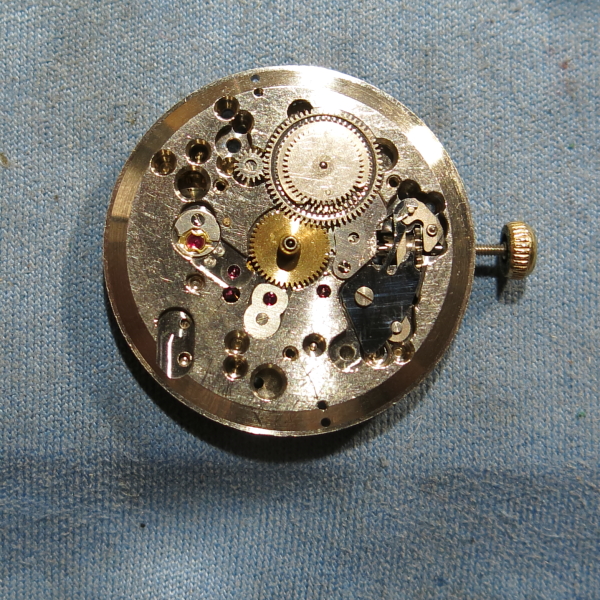 With the back of the movement cleared of parts, you can see there is a gear between the barrel and the main plate that engages a special mainspring arbor with matching teeth.  When the watch is wound it will turn this gear and as the watch is running, the mainspring barrel will slowly turn and the wheels on the front of the watch will rotate the reserve wheel back down to zero.  It's a fascinating little mechanism, isn't it? 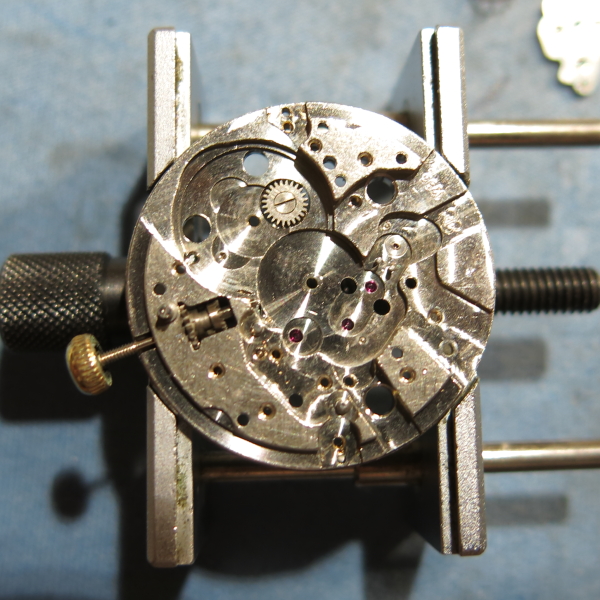 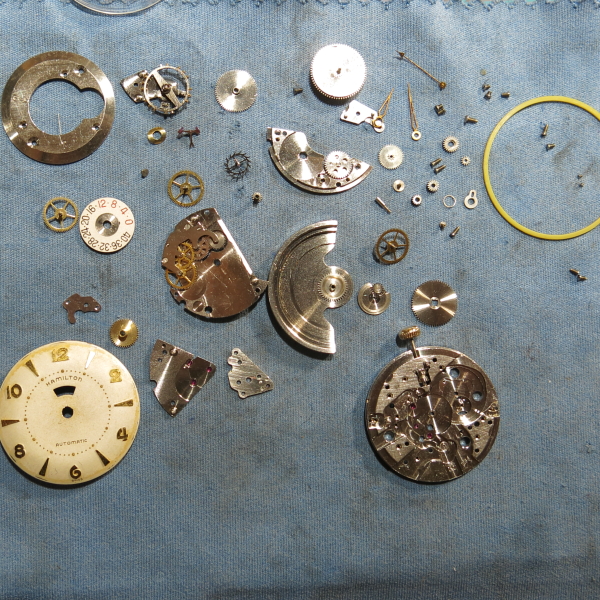 I'll wind the watch fully to verify that the reserve wheel is functioning correctly. 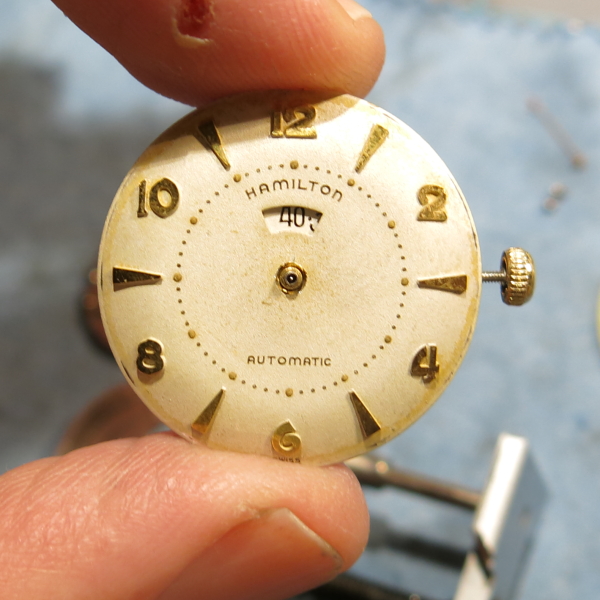 With the watch fully wound, I put the balance back into place and the watch is now ticking away. 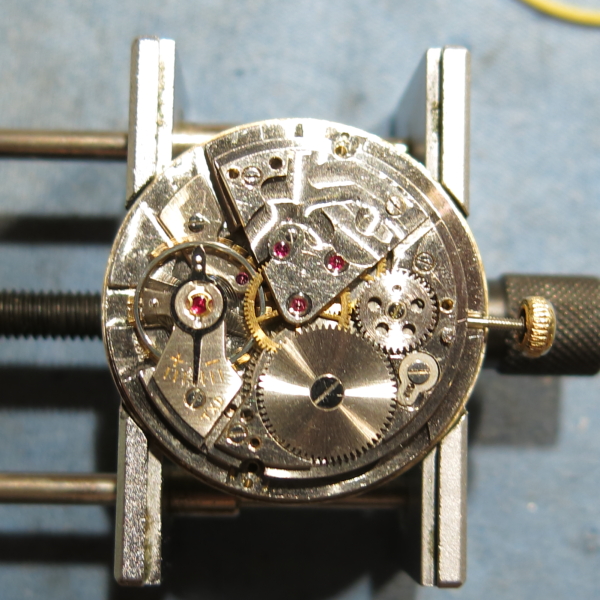 The movement is running a little fast but that's easy to adjust.  The beat error is just under 200... that may be because of the extra energy that all the other parts are requiring... or the mainspring just doesn't have the resiliency it may have originally had. 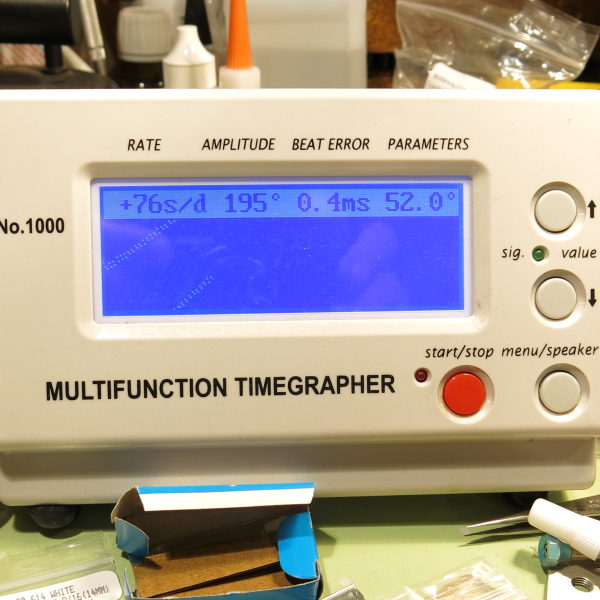 A little tweaking of the regulator gets the timing to fall back in line.  I tend to leave watches running a little fast as they will settle down eventually. 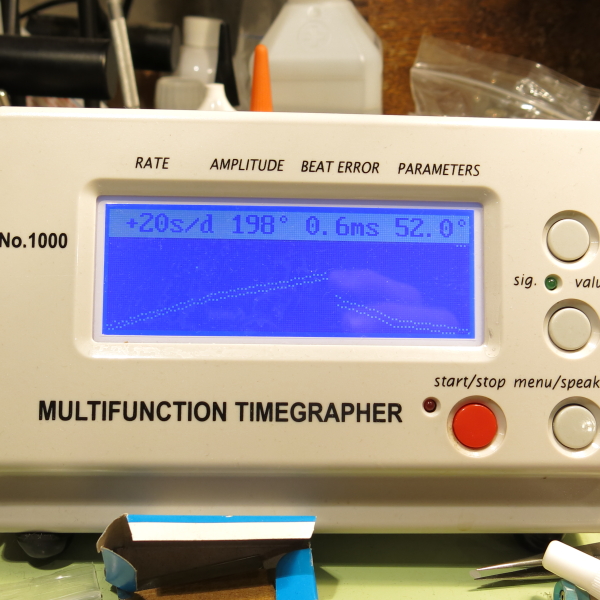 The oscillating weight goes back onto the movement and the assembly goes back into the freshly cleaned case. 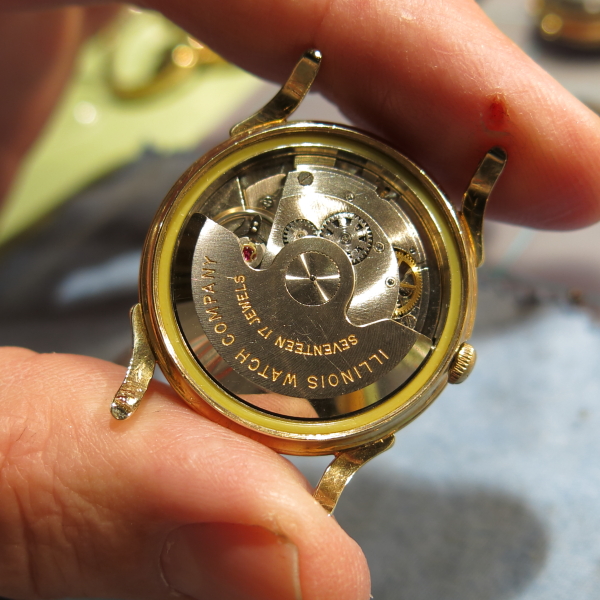 I relumed the hands and put a fresh lizard strap on and this 60 year old watch is looking, well, not a day over 50.  It actually looks a lot better than my camera makes it appear.  Now I just need to watch it for 40 hours to confirm it unwinds to zero. 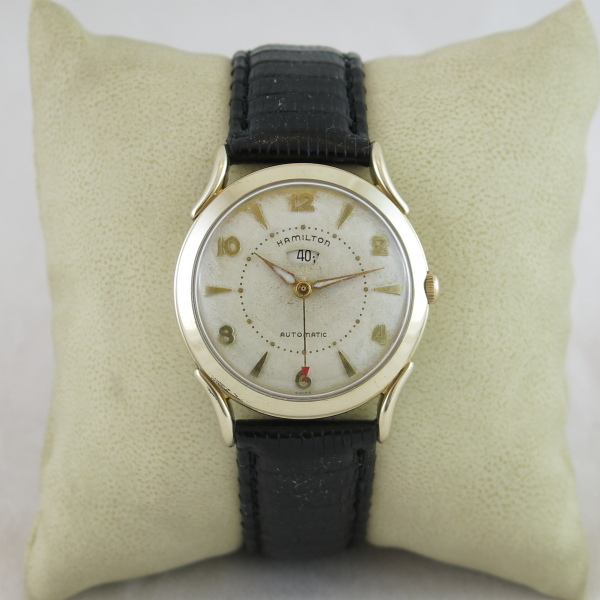 Well sure enough, I had a fellow collector me who has an affinity for the Hamilton Illinois niche contact me with a photo of the inside case back of one of his watches like this one - and the inside says "Accumatic II "B"".

How was that for a good guess? 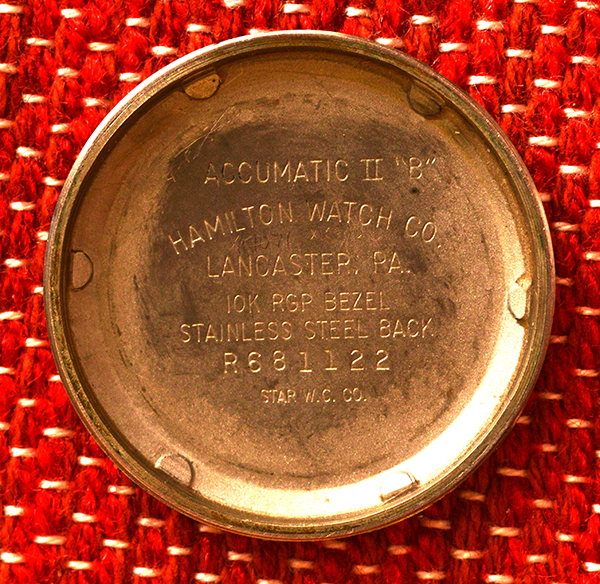