Apparently "this was in" in the 1960's.  Although Hamilton's first automatics arrived on scene in 1954, automatics in general date back to the 1930s.  One thing they all have in common is the were thicker than manual winding grades, mainly because the auto-winding mechanism was an added layer on the back of the main watch mechanism.

The first Thin-o-matics in Hamilton's line up were introduced in 1959.  Initially, some Thin-o-matics use ETA movements with "thin" case designs but most of the time you'll find a Hamilton micro-rotor movement inside that was the product of Buren.  In fact, after a few years Hamilton acquired the Buren Watch Company, located in Switzerland.  Eventually, Hamilton moved all production to Buren's Swiss factory, but that wouldn't be for another 10 years.

There are over 70 different Thin-o-matic models, including the Dateline models with calendar complications.  So acquiring all of the Thin-o-matics models would be an impressive collecting feat.  Personally I find the micro-rotor movements to be a real bear to work on - so I haven't pursued them while there are other fish to find but occasionally I still go after interesting Thin-o-matic models.  One of my recent finds is a 1964 Thin-o-matic T409.
\ 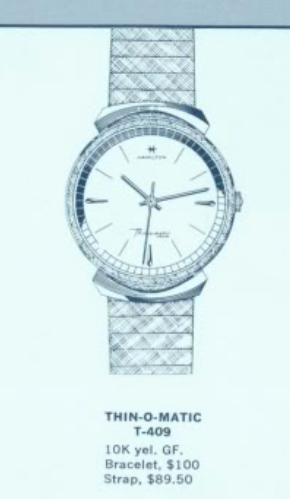 The T-409 is a one-year wonder and was only produced fro a single year.  It was a unique looking model with very interesting lugs that added visual interest to what would have been potentially just another round watch. 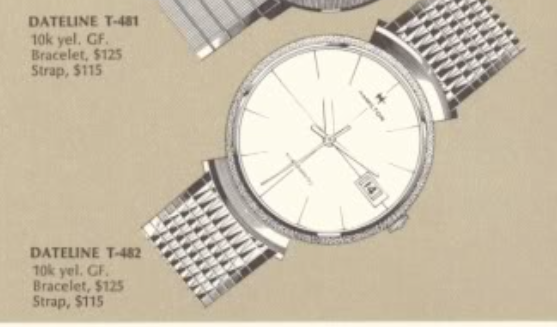 The T-409 came in a 10K gold filled case and if you look closely at the catalog image, there is a gold chapter ring surrounding the dial.  Tucked inside is a Hamilton 17 jewel 620 movement.  The 620 is based on the Buren 1005 grade.

I've had my project watch for a couple of months while I worked up the courage to tackle another micro-rotor.  You might recall the February post I did on the 1959 T-401 - one of only two square automatics in Hamilton lineup.   That was my first attempt at a micro-rotor in several years.  They are VERY complicated calibers.

Looking at my project watch, it's in decent enough shape.  The bright lugs contrast well to the florentine engraved bezel.  The radial-finished dial is better than it appears in the photo.  The crystal has some smudges on it.

It wasn't until I started to do this write-up that I realized my watch doesn't have a golden chapter ring.  It has a plain gold reflector ring instead.  I suspect that a previous watchmaker couldn't find the correct crystal and made a swap.  I've seen other T-409's with a similar plane ring though - so maybe this is a factory-original set up.  Who knows? 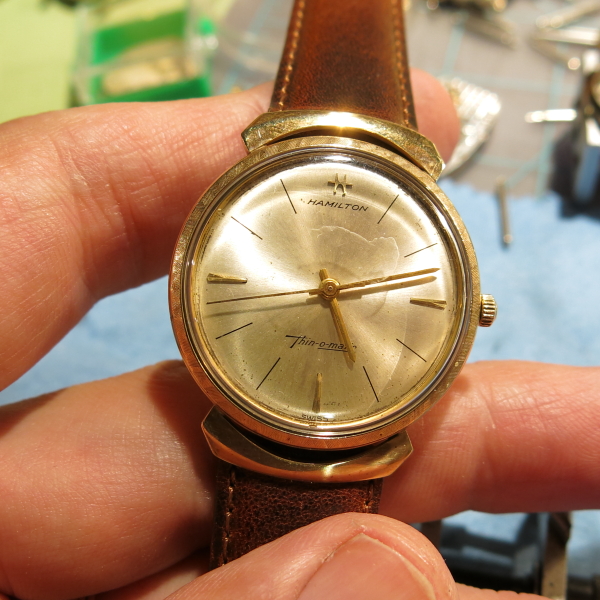 The T-409 has a substantial case.  It's a large watch by vintage standards in addition to being thin, thanks to the flat back. 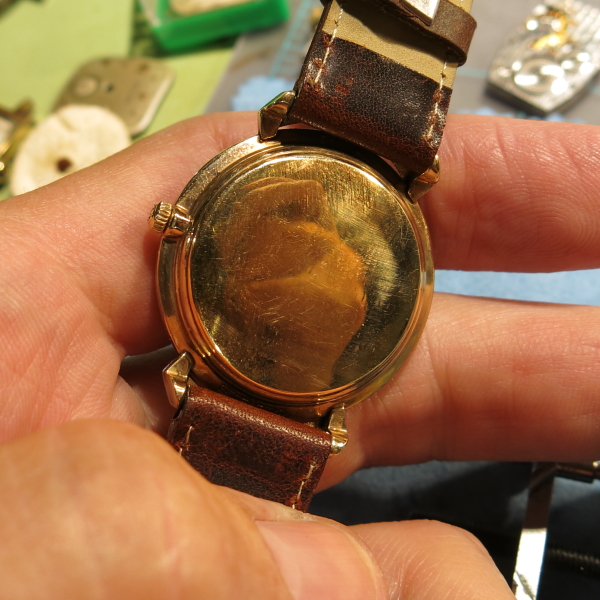 The 620 inside the case looks identical to the T-401's 663 movement.  Sorry for the slightly blurry photo - there are better one's below.  I'll have to look more carefully to see if I can find a difference between the 620 and the 663. 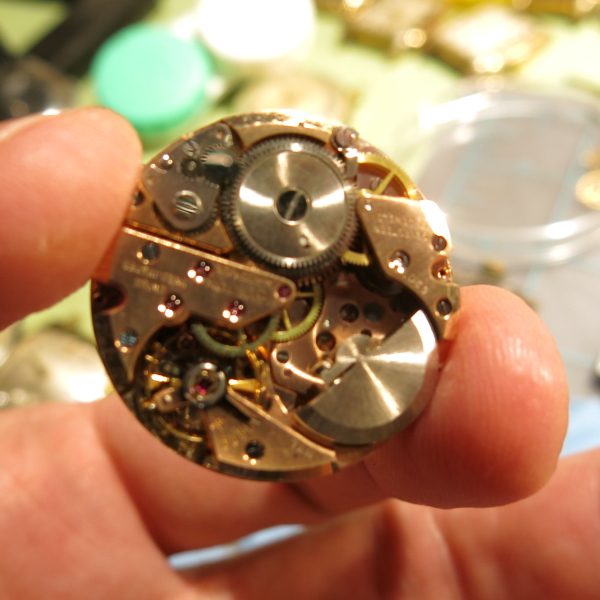 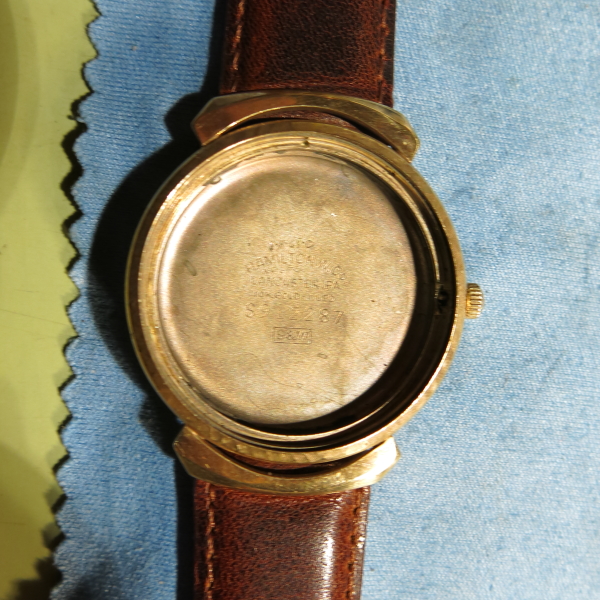 The dial-side of the main plate looks fairly typical.  The large ruby jewel on the upper left is part of an axle-less wheel that's involved in the winding mechanism. 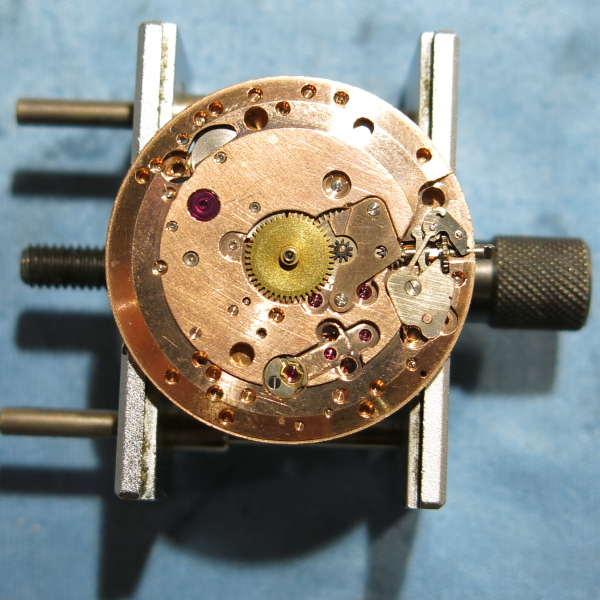 I took a bunch of photos - but not as a step by step guide.  They were mostly for me - as an aid in putting this movement back together.  You'll see in a bit that there are a ton of parts inside this watch and the goal is to not have any left over when you put it back together.

Letting the mainspring down is a challenge on micro rotors so I my approach is to bull the balance and then carefully remove the pallet fork.  Without the pallet fork, the movement is free to unwind on it's own.  I also took off the oscillating weight, although the mechanism below it will take a while to work my way down to removing. 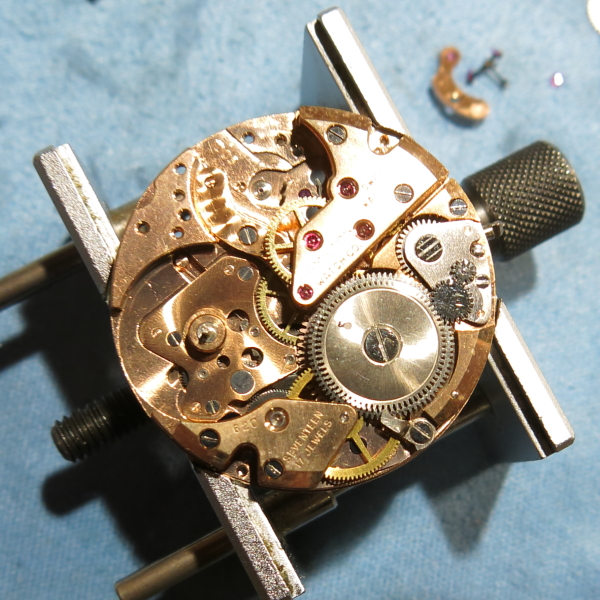 Next off is the middle of the autowinding mechanism, along with the ratchet wheel.  You can see how the motion of the oscillating weight is transmitted through various gears to the mainspring barrel. 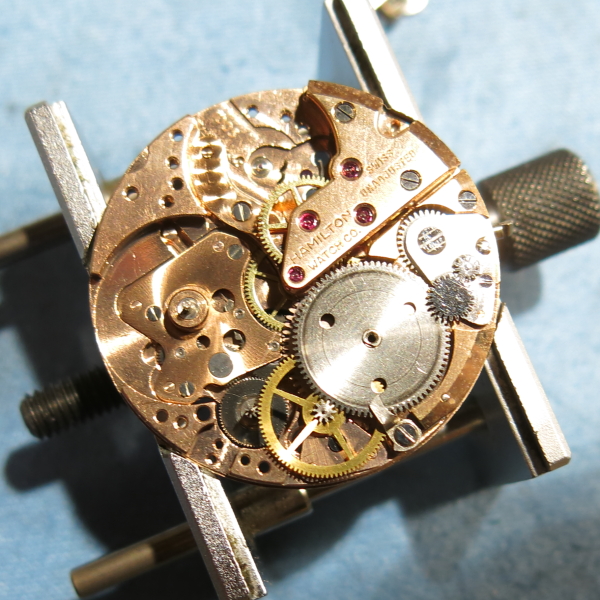 Now the crown wheel has been removed and I'm deeper into the movement.  One more little plate to remove at 6:00 and the barrel can come out. 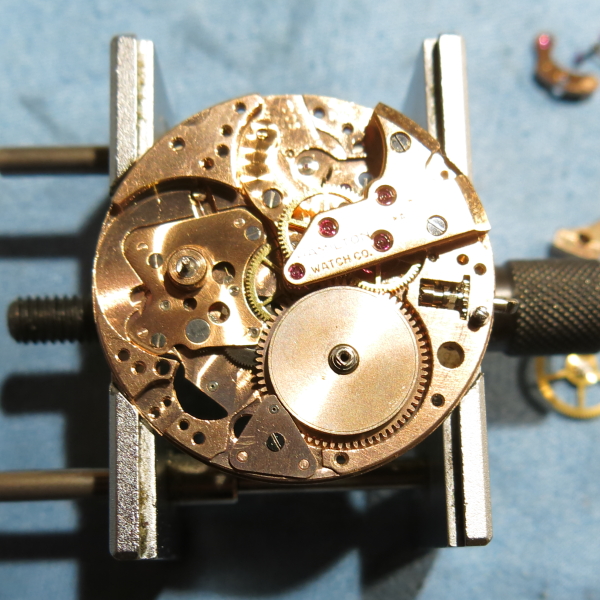 The bridge that covers the transmitting gear train parts can now come off.  In the shot below, you can see the opposite side of the axle that connects to the oscillating weight.  This little gear turns all the other wheels that winds the watch when you're wearing it. 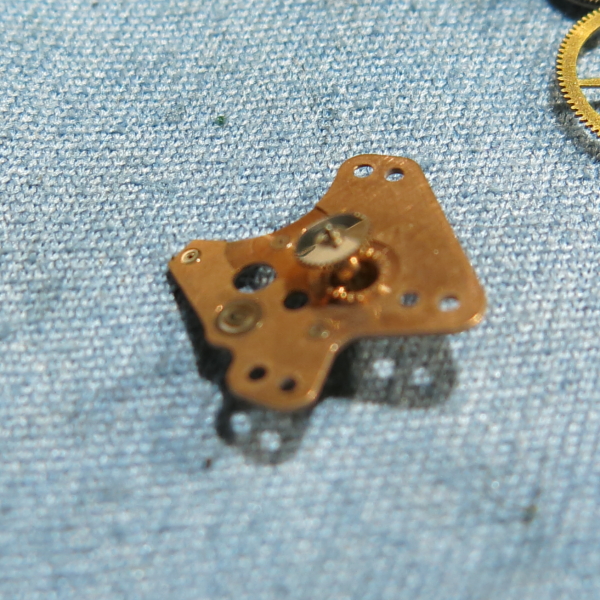 Here's the gear train that is hidden below the bridge above when it's in place.  There's a little click with a long spring.  All of these parts need to be aligned in order to get that bridge back in place.  Did  I mention this is a tricky movement to reassemble? 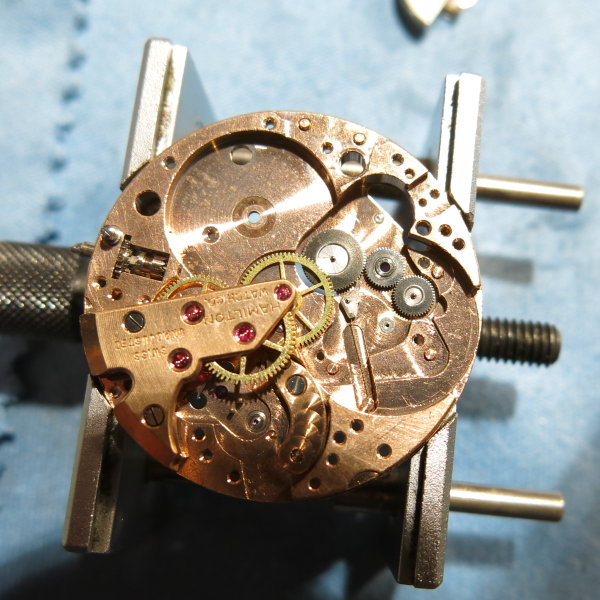 Phew!  The easy part is finished - getting everything apart. 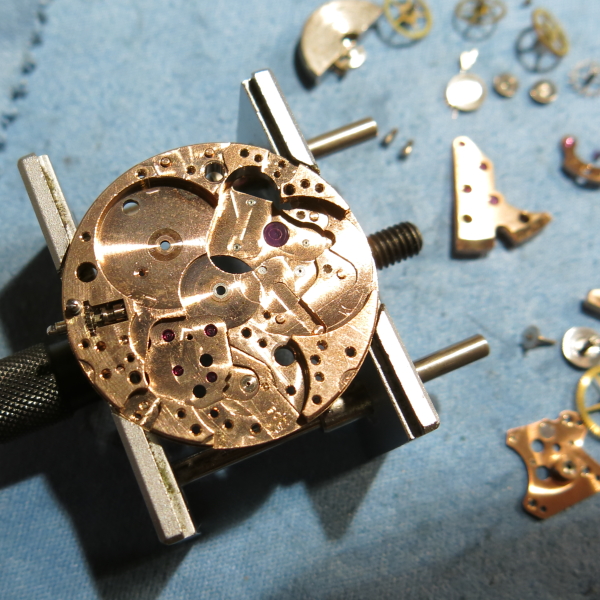 Everything is cleaned and dried.  Things are bright and shiny now. 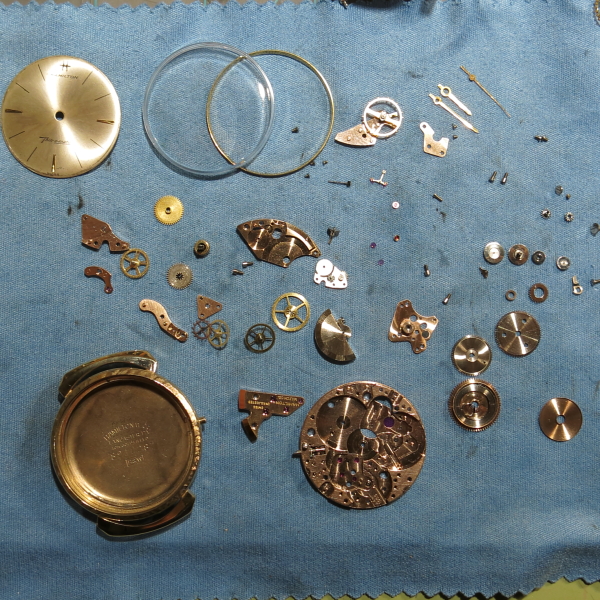 Very carefully I put everything back on with lubrication in all the bearing surfaces.  I'll put the weight on last.  Next step is the balance and hopefully the watch will be running. 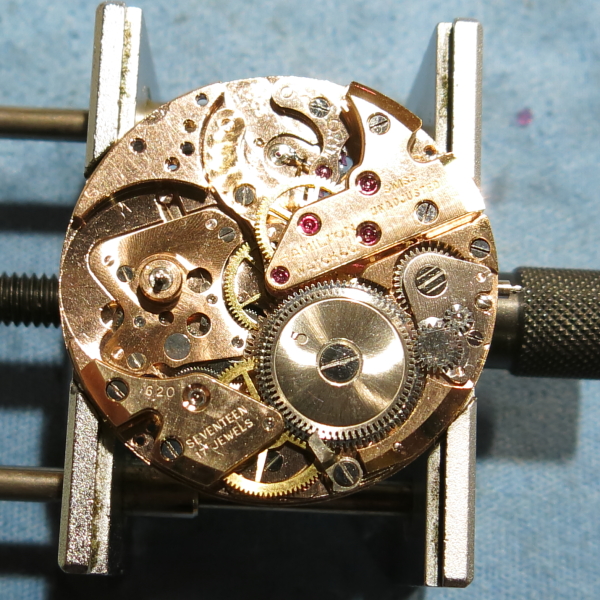 The watch is now ticking away.  If you look closely you might be able to see that there are no jewels in the balance cock.  I'll install them next. 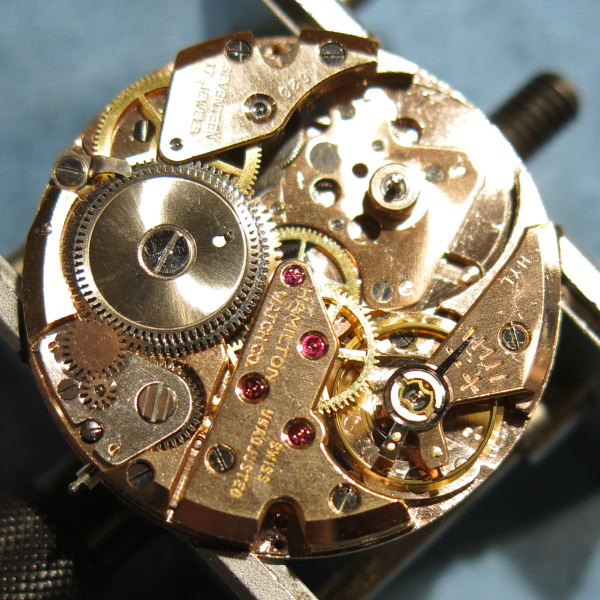 There are two jewels on each end of the balance staff... a setting jewel and a cap jewel.  The two are held in place by a shock spring. 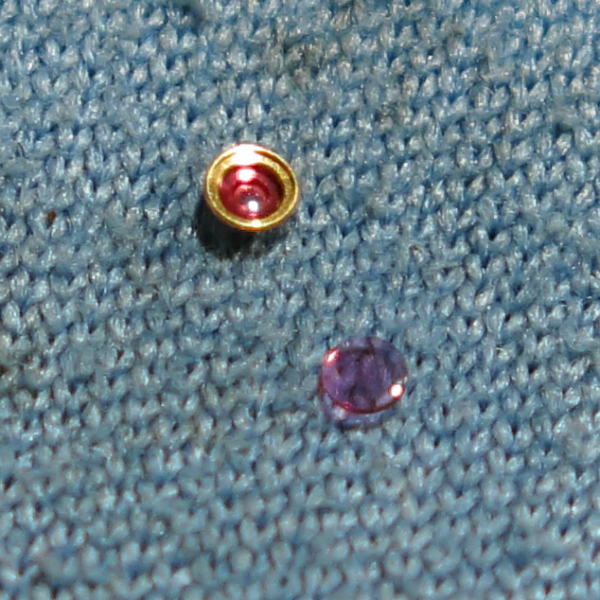 With the jewels lubricated and installed, the next stop is the watch timer. 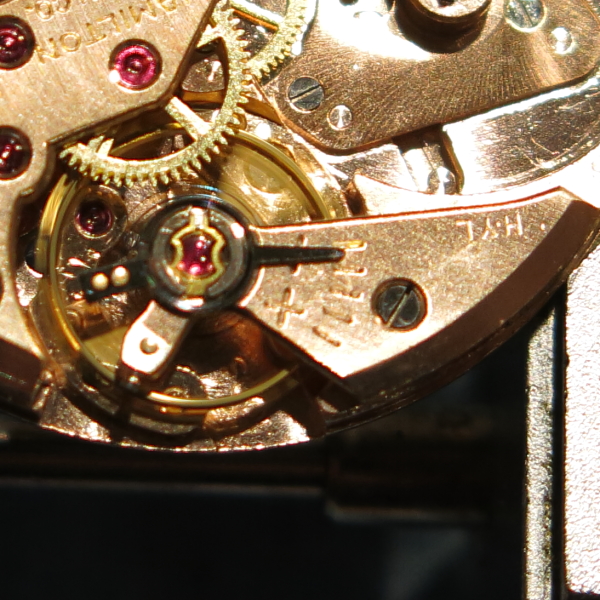 Well, the watch is running but the beat rate of 19,800 isn't correct.  It's running a wee bit fast so I'll re-clean hairspring and try again. 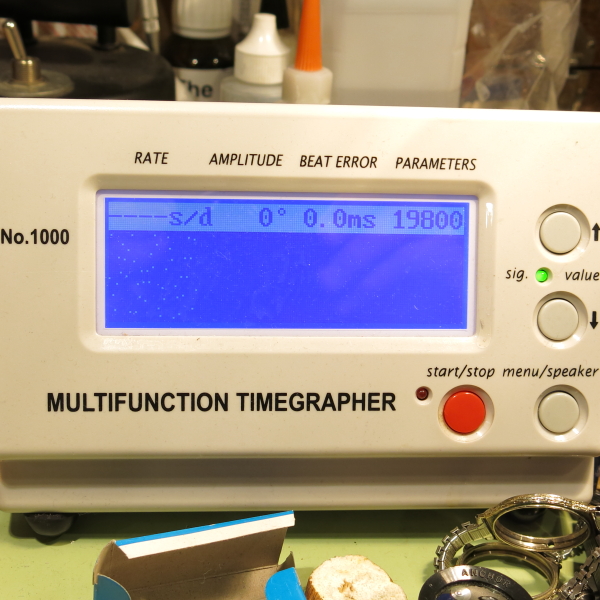 The movement goes back onto the timer.... note the position of the regulator, near slow. 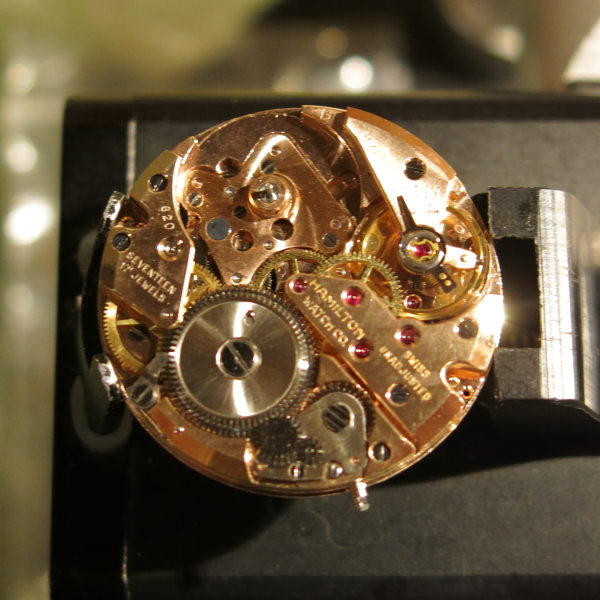 The watch is running with a proper beat rate but it's also a bit slow at -103 seconds per day.  The amplitude and beat error are good so just a tweak of the regulator is all that's needed. Note the new position of the regulator - it doesn't take much to speed the watch up, 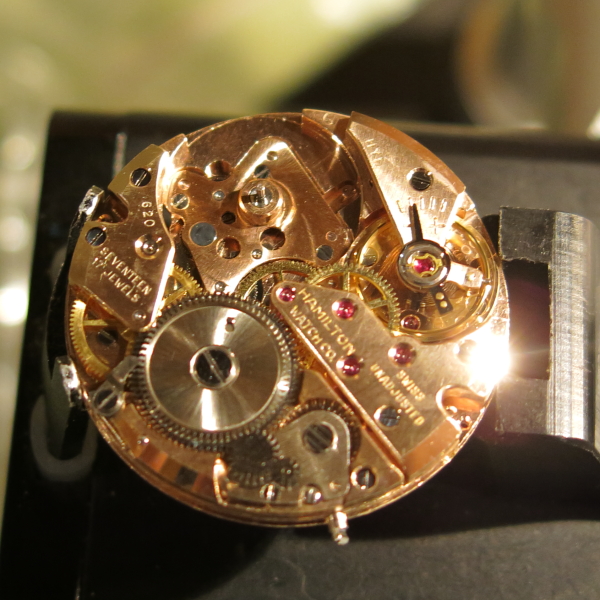 There - that will do nicely. 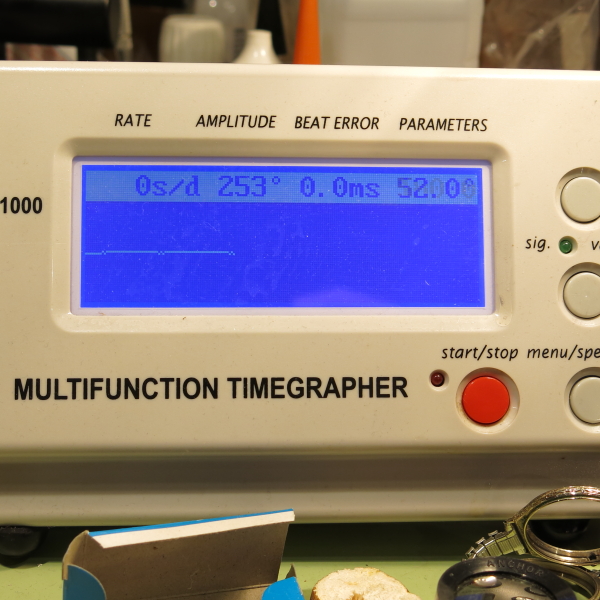 The oscillating weight goes back on and I'm now in the home stretch.  I just need to add the parts to the other side of the main plate, install the dial and hands and button it all up in the case. 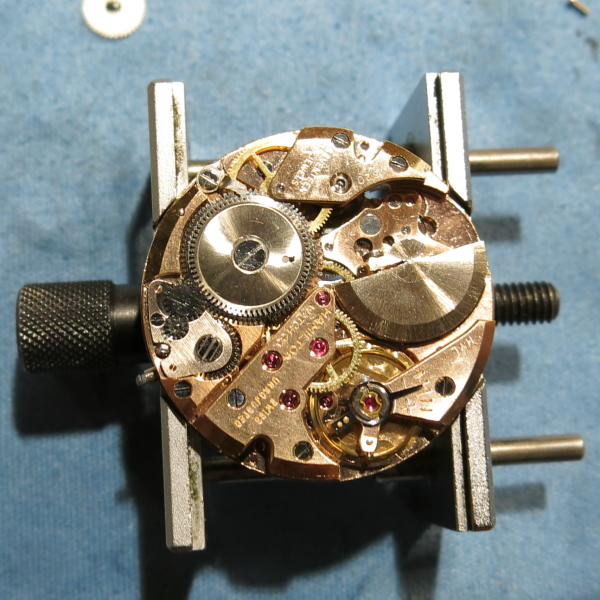 Well, this watch was all the challenge I expected it to be.  I don't recommend trying to tackle a micro rotor unless you are very experienced with less complicated movements.  It requires a delicate and patient touch.  This watch turned out great though and I'm very happy with the results.  For a round watch, the T-409 is really sharp! 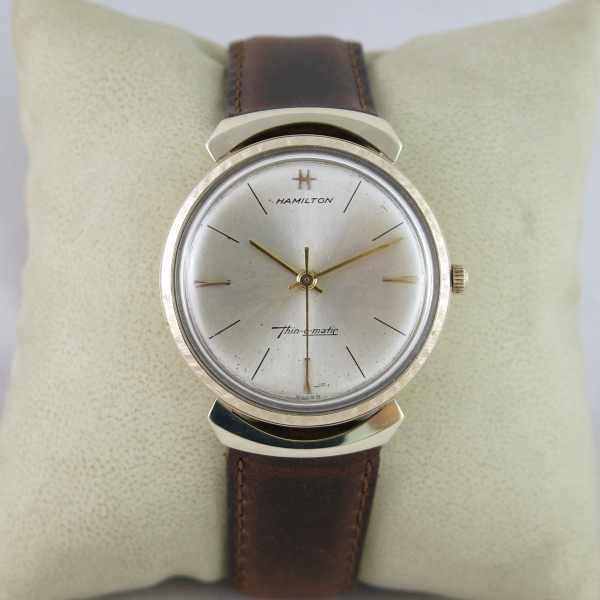