There are all sorts of names for Hamilton models.  Originally, watch models were simply identified by their shapes... Cushion, Square, Barrel, etc.  After a few years, new models were introduced and names of famous places or people were used, such as Piping Rock, Coronado or famous explorers like Byrd and Ericsson.  Then more generic names where used - probably after Hamilton employees or associates near Lancaster PA.  Even dress pocket watches were eventually given masculine names.

It really does make you wonder how a model was named by Hamilton designers.  Some names are unique and even exude mystique. Take, for example, the 1940 Midas.  I've heard of King Midas, who could turn things into gold... but have you ever met a person named Midas.  I'm sure there's one or two out there.

The Hamilton Midas was introduced in 1940 and made through 1947. 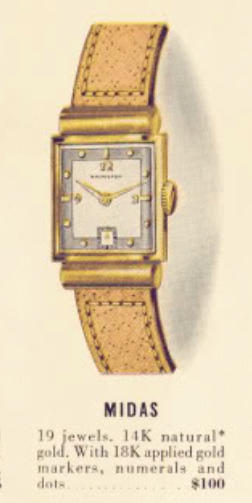 Also in 1940, Hamilton introduced the Coral Midas... the same model but with a rose gold case.  The coral version was only made for a couple of years. 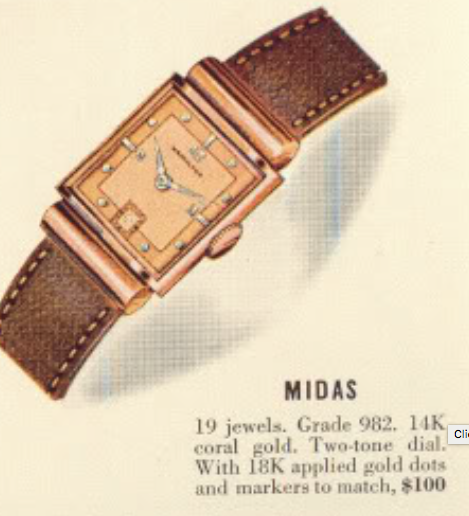 The Midas is a high end watch, as you might assume from the name.  The case is solid 14K yellow (or rose) gold.  The sterling silver dial has a two tone finish and features solid 18K gold numerals and markers.  The coral version's figure and hands were rhodium plated to appear silver.

The Midas is on the smaller side, even for a vintage watch.  So it would be easily misidentified as a ladies model by someone finding a Midas at a yard sale.

Hamilton also introduced the 982M in 1940.  The M stands for Medallion and the 982M was the 19 jewel 14/0 sized grade that would be used in solid gold cases thereafter.  The 982 grade was previously used in the solid gold models.  After the introduction of the 982M, the 982 would be used in 14K gold filled cases and the 17 jewel 980 dedicated to the 10K gold filled models.

I recently purchased a Midas from a fellow collector who wasn't thrilled by it.  I thought it was interesting and a good project to show on the blog.  I purchased it as non-running, which is always a risk.  You never know why a watch is not running but if it comes from a collector then you stand a higher risk that it has issues.  I say that because I've bought "non-runners" from non-collectors that didn't run because they didn't know to wind it.

As you can see below... this Midas has a dial marked Tiffany & Co.  It's obviously a refinished dial and not even totally refinished at that.  So it begs the question, is this really a Tiffany model? 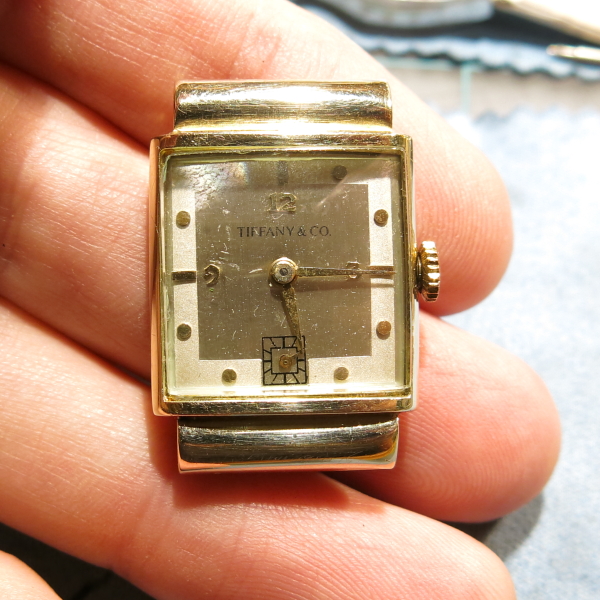 Here's a closer look at the dial.  There is some dust and a couple of marks from being behind a loose, poorly fitting, crystal.  It looks okay but would look better if all of the black printing was finished - specifically outlining the white area.  The seconds bit looks lonely without any other printing around it. 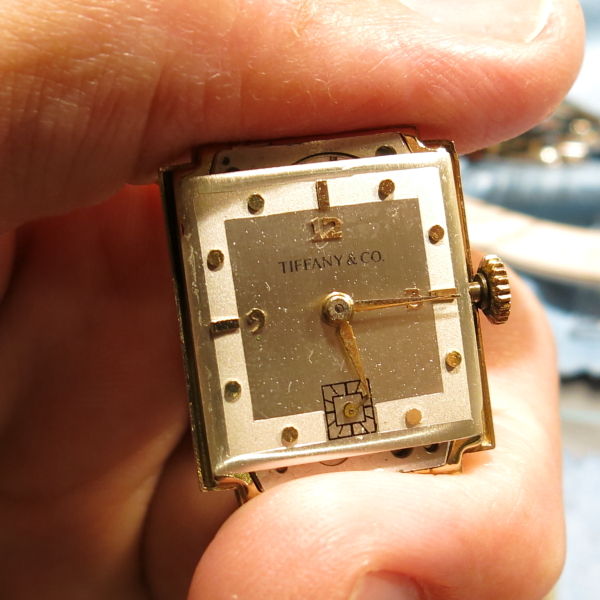 Hamilton is well known to have made watches for Tiffany.  In fact, there are production records that detail specific models and price points.  Some models are wrist watches and others are dress pocket watches. 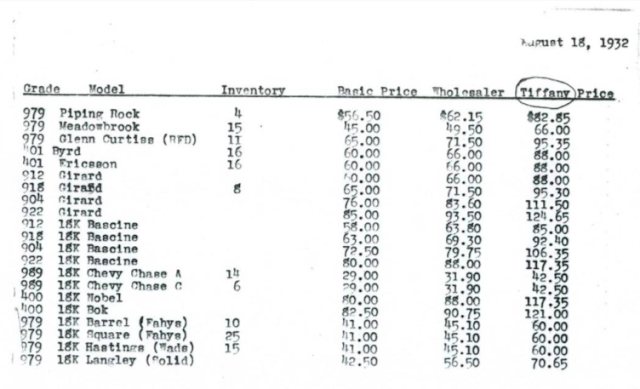 Production information about the 14/0 size models is a little more spotty.  There are hand-written records for many models that were produced for Tiffany but nothing specifically mentions the Midas.  There is one note about a "14/0 size 982 strap hooded" model but the other writing is hard to make out.  Is it a Midas, Rodney, or potentially a Gordon? 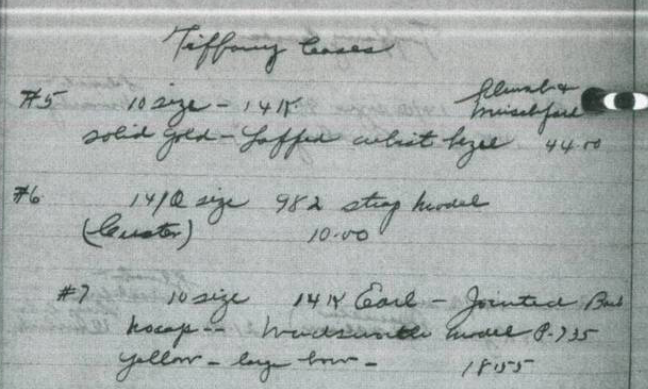 Other notes clearly show the models involved, like the Bentley and the Boone... is there really a 14K Boone out there somewhere?   Normally that model is gold filled.

It's really very interesting, isn't it? 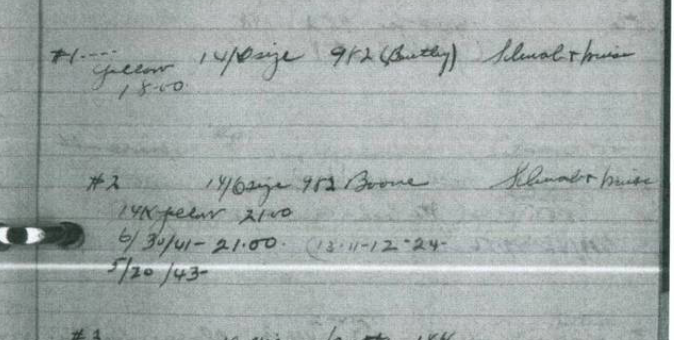 Often the case is marked Tiffany & Co but not always.  If it is marked, that's definitely supporting evidence of authenticity.   However, if the case isn't marked and if the dial is an obvious refinish,  then it really does call into question the watch's authenticity (as a Tiffany model).

Personally, I would assume this Midas is not a Tiffany Midas - but who knows?  That would be an awesome name for a James Bond girl, by the way, wouldn't it?  "Hi, I'm Tiffany Midas.  What's your name?"... "Bond, James Bond".  Goldfinger meets Diamonds are Forever.

Anyway... the back of my project watch is un-engraved.  Everything is nice and shiny.  You can see how the strap would be attached to the hooded lugs. 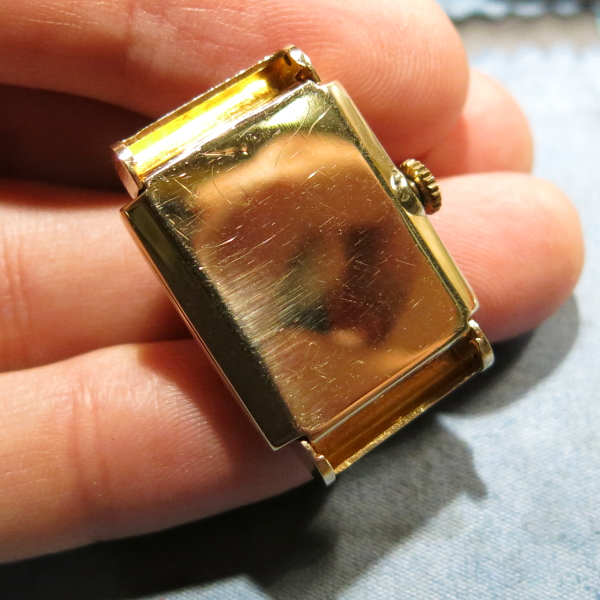 The 982M is a highly damascened version of the 982 and the earlier versions of the grade have a solid gold medallion inset into the train bridge.  I think the medallion has an H and W making up the pattern. 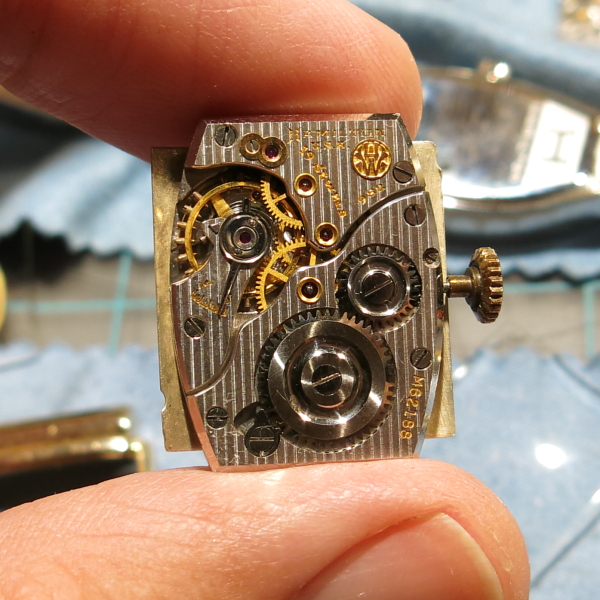 There's nothing inside  the case back to indicate this is an authentic Tiffany model.  It's definitely an authentic Midas though. 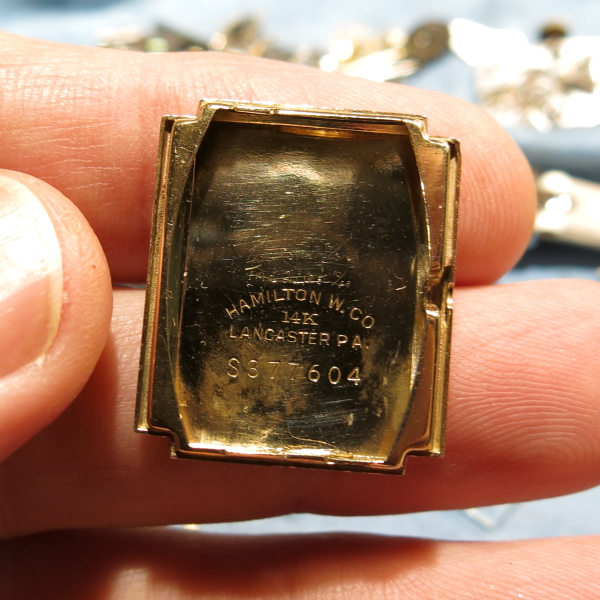 The blue steel mainspring is set and destined for replacement with a fresh white alloy spring. 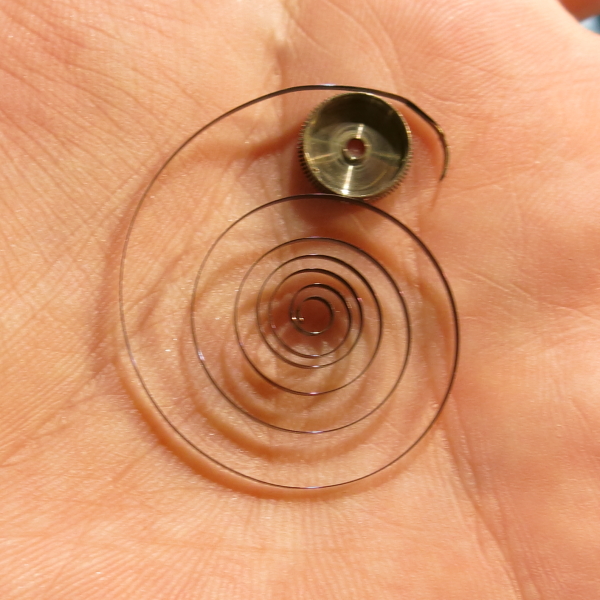 Here's the reason why the watch isn't running... it's missing the upper pivot on the balance staff.  You can see the lower pivot and there should be one just like it on the opposite side. 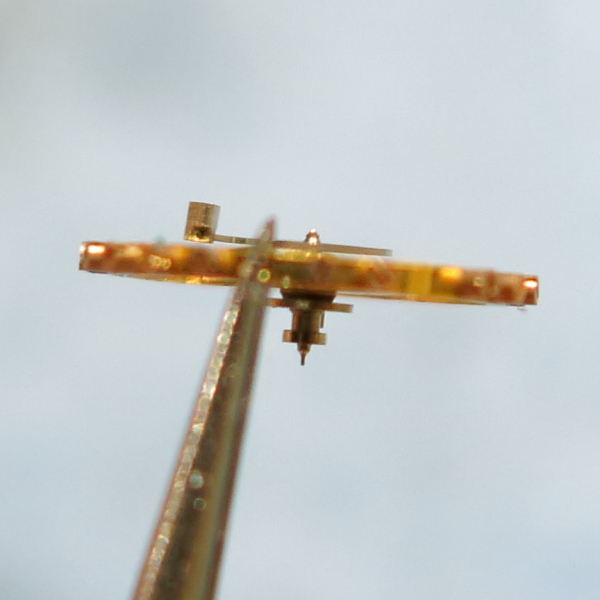 While things are in the cleaner, I'll prep a new glass crystal for installation. 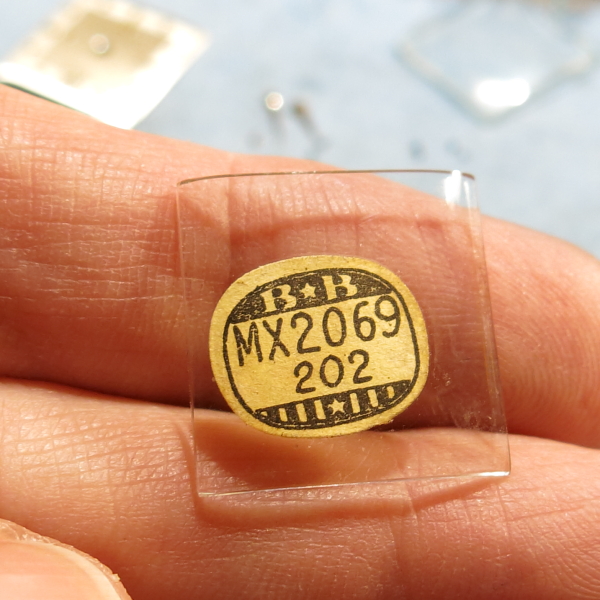 There's a lot more that goes into crystals than you might initially think.  Not only is the size and shape important, the contour of the sides is critical too.  The sides can be flat or curved.  This Midas crystal has two flat edges and two curved edges. 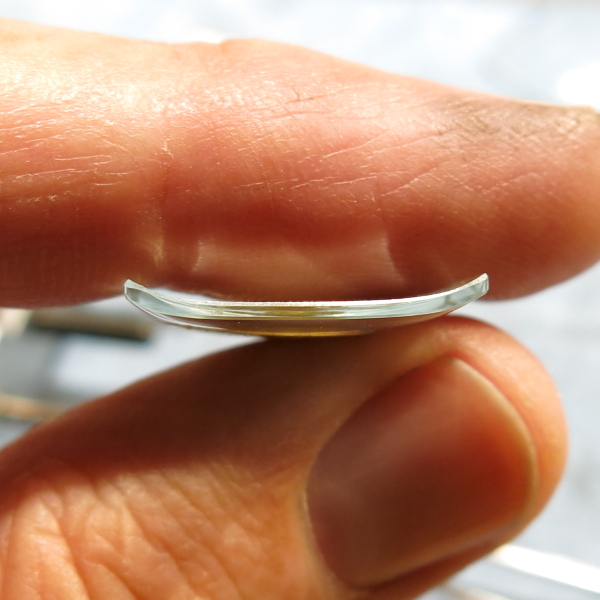 Everything is cleaned and dried before being reassembled.  I'm using a spare balance assembly from a parts watch in lieu of changing the balance staff.  I'll save that project for a rainy day. 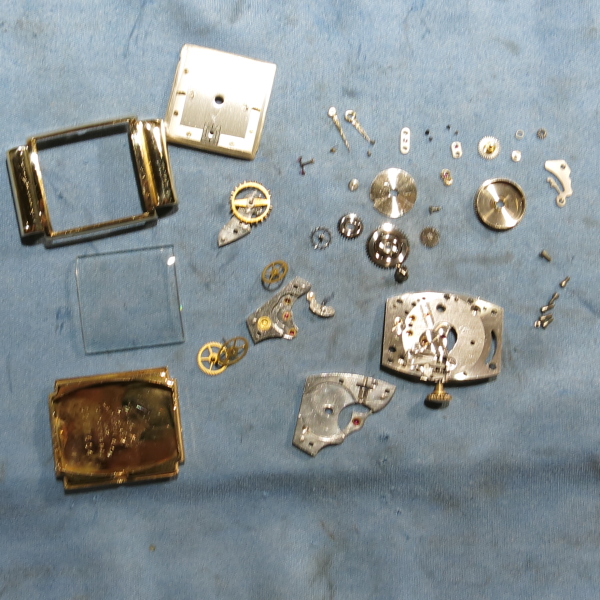 My new white alloy mainspring is installed.  I just need to install the arbor, add some grease ,and put the cover back on. 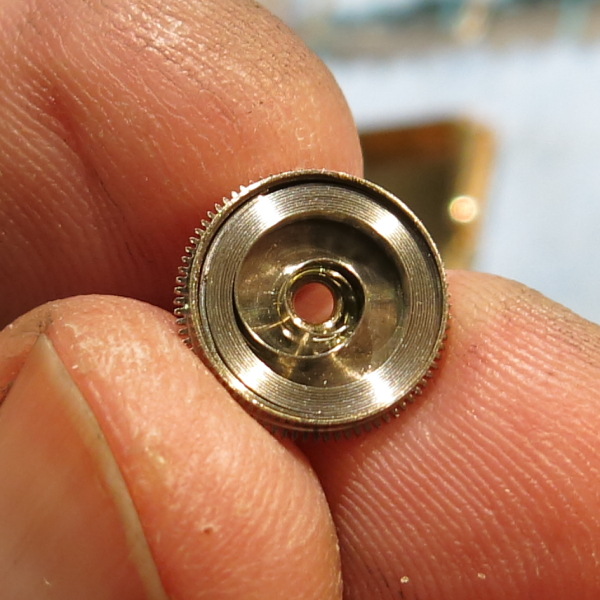 The movement is now running with good motion... off to the timer. 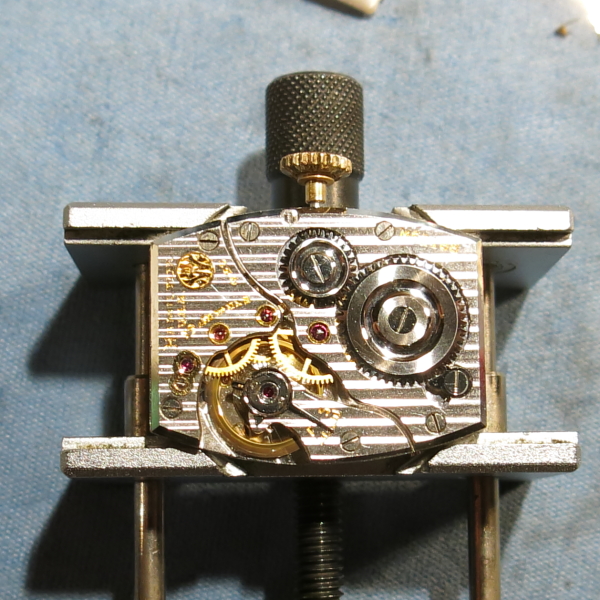 What the...?  This is a very funky looking pattern on my timer.  Maybe my new balance has unforeseen issues.  First I'll try the demagnetizer. 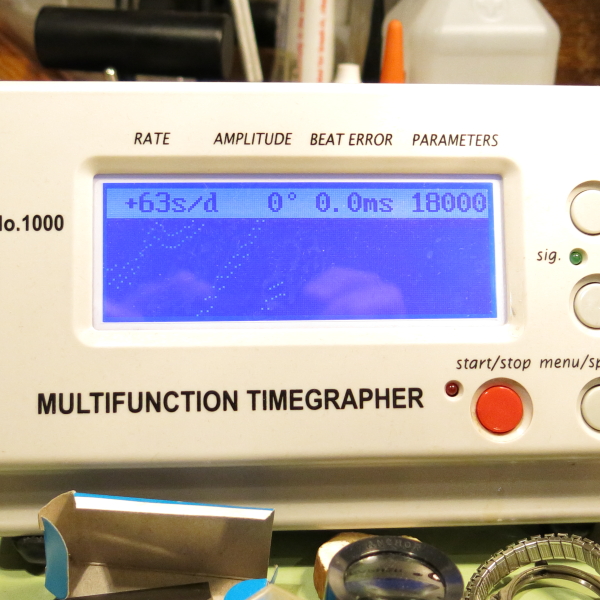 Ah, that's much better.  I'll have to tweak the regulator to bring the beat rate back in line so the two lines get closer to horizontal.  It doesn't look like two lines because they are so close together.  The beat error is almost zero. 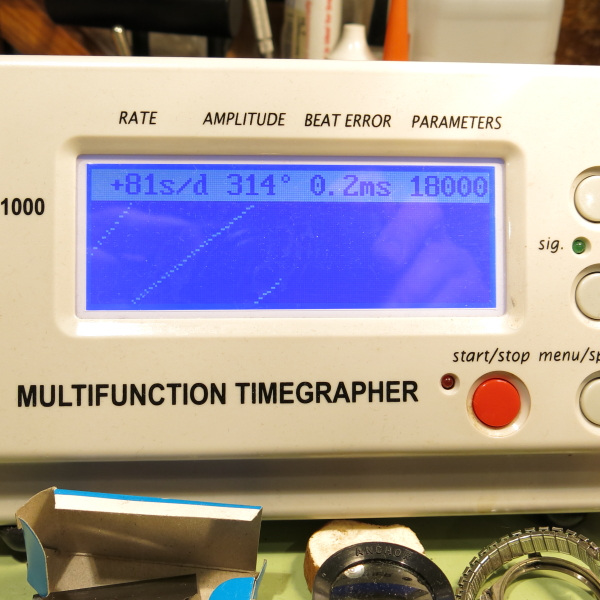 There... right on the money and it's the same dial up, dial down and pendant up.  This movement is back to 1940 condition. 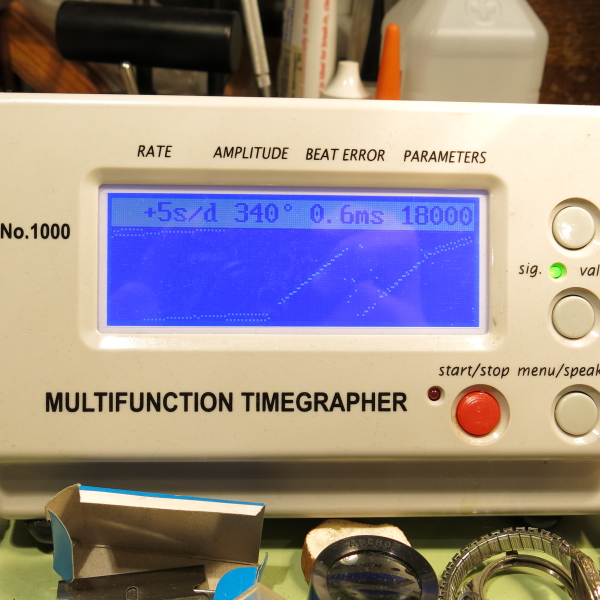 Here's the finished project on a vintage, period correct, strap.  The dial looks a little naked to my trained eye but I have a feeling my bride may glom onto this watch before I have a chance to send the dial out to be properly redone.  Time will tell (pun intended). 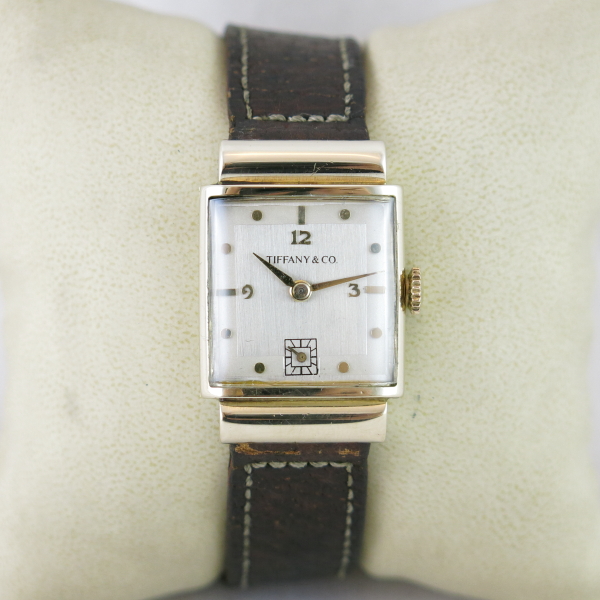 I decided to get the dial redone to it's original standards. Since the case didn't indicate it was an authentic Tiffany model, I decided to make it your basic Hamilton Midas.

I put a pink strap on for life wife but it lost some of it's appeal since it doesn't say Tiffany anymore.
I think it looks a lot better now - what do you think? 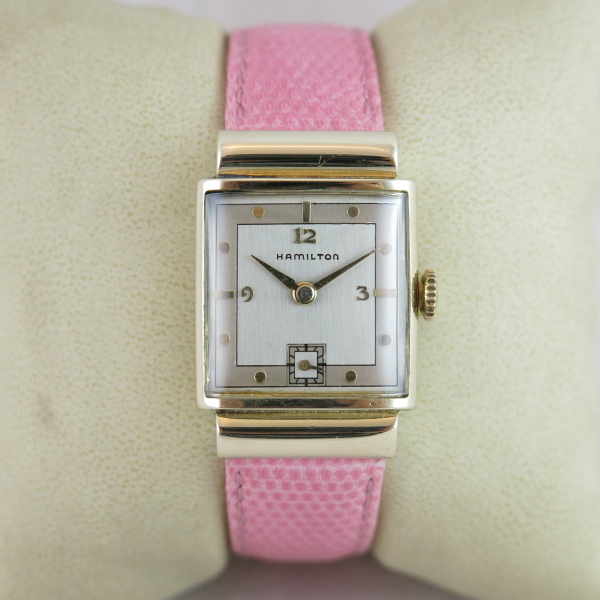 SaveSave
Posted by HandyDan at 8:17 AM